Try it with tanks...

We have been discussing Op14 for the last few months in the Monday Group. For those of you who don't know Op14 is Richard Brooks' Great War operational game, using playing cards and squares. I've played the game once, a few years back at CoW, and Phil has played in a multi-player game run by Ian Drury. What we needed to do was to have a go ourselves and see if we liked it when we were running it, rather than being directed by the rules' authors.

I originally intended to do a 1918 Kaiserschlat game, but I didn't really have enough Germans. Next stop was a battle from the 100 days. Annoyingly I could find orbats fairly easily in my library, but I was short of usable maps. In the end I ended up putting a fictional game on the table. This is a four division corps attack, with tank support. The squares, BTW, represent about 2km, and four bases are a brigade of 4-6,000 men. 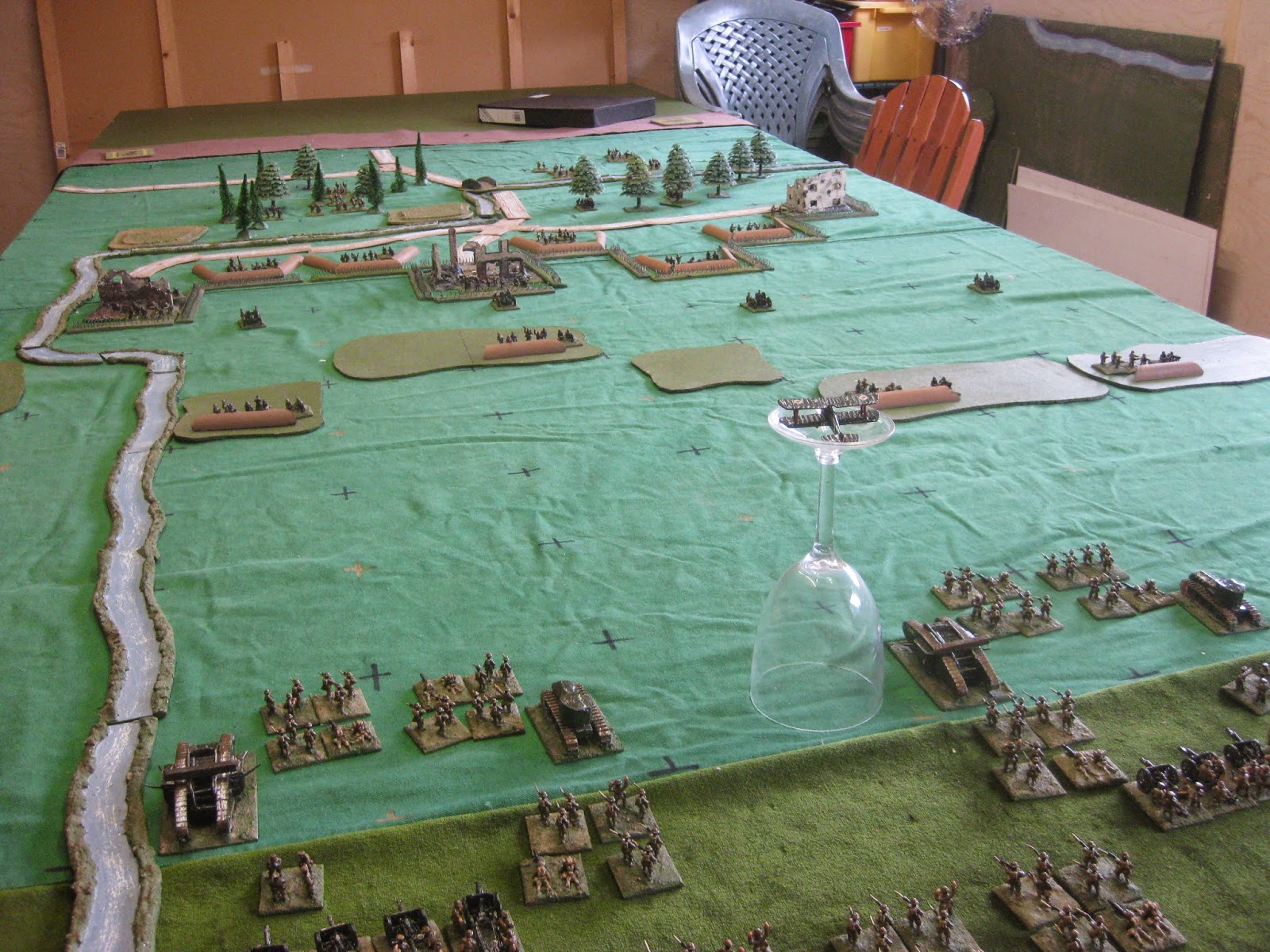 I decided to play long ways down the table, to enable me to set up a position in depth. In the end it was probably too deep and I didn't get the set up quite right. The width of the table is about 20km, and the defensive position about 30km. 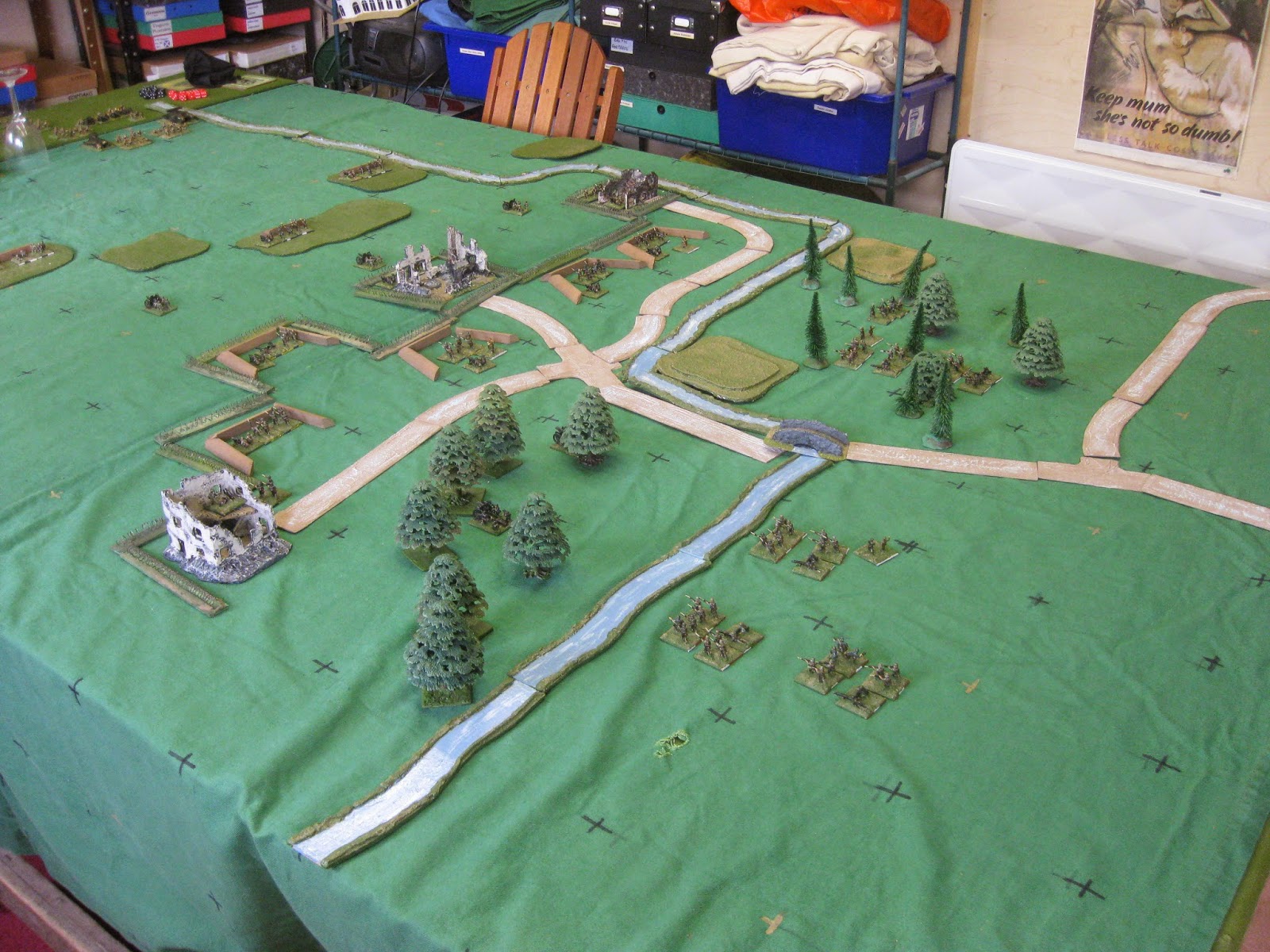 The German position was in three lines. Firstly there's fortified shell holes, next a string of fortified villages, finally a couple of divisions in reserve positions in the woods. I gave Phil the attackers, and I ran the defending Germans as I'd spread them very thin, so it didn't look that enticing a prospect. 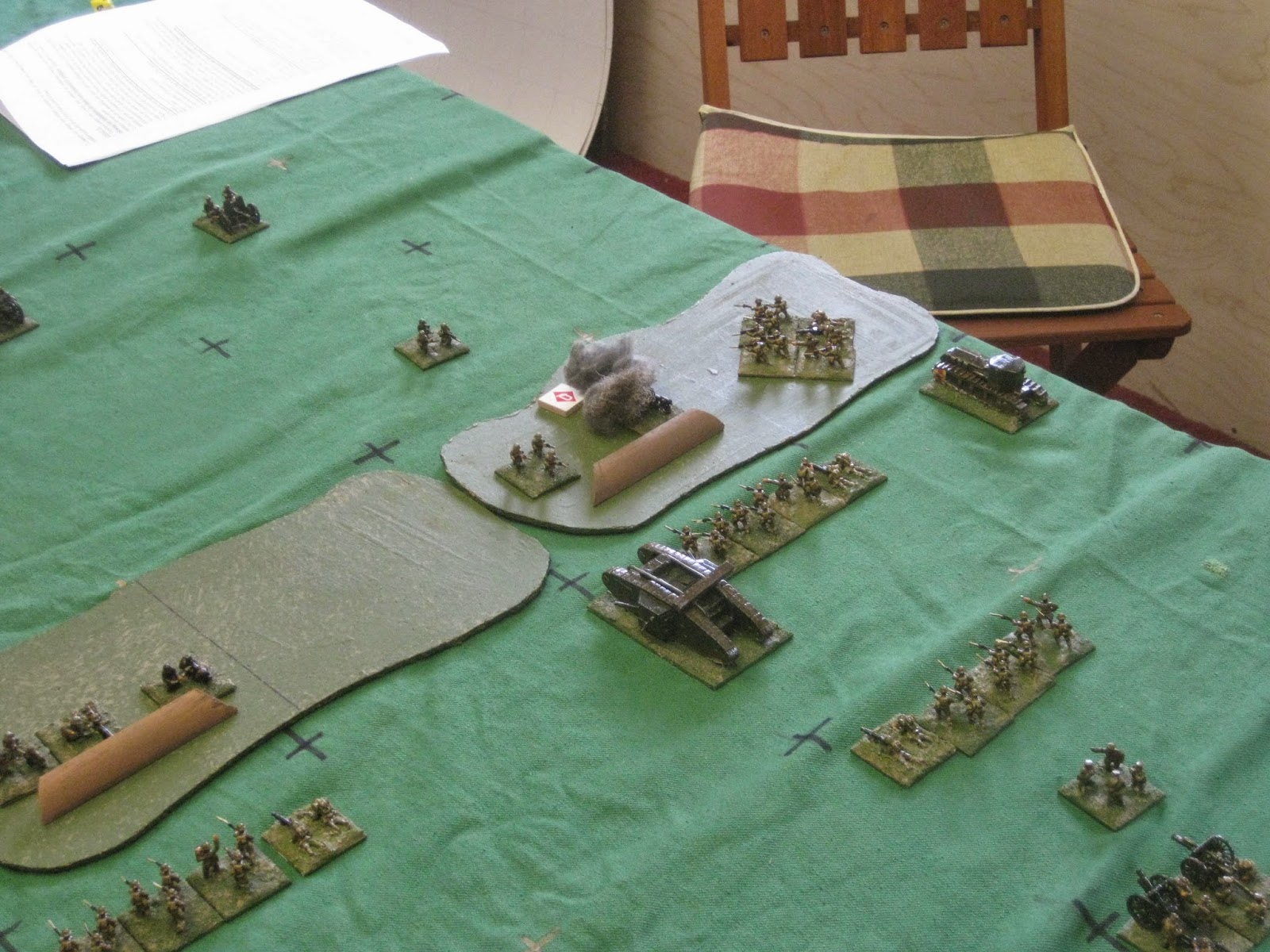 This is the initial attack on the first line. Smoke represents the result of the bombardment by the supporting RFA batteries. The Tommies then went in from the front with armour support and another unit threatening the flank of the position. It was soon overrun, exposing my gun line. 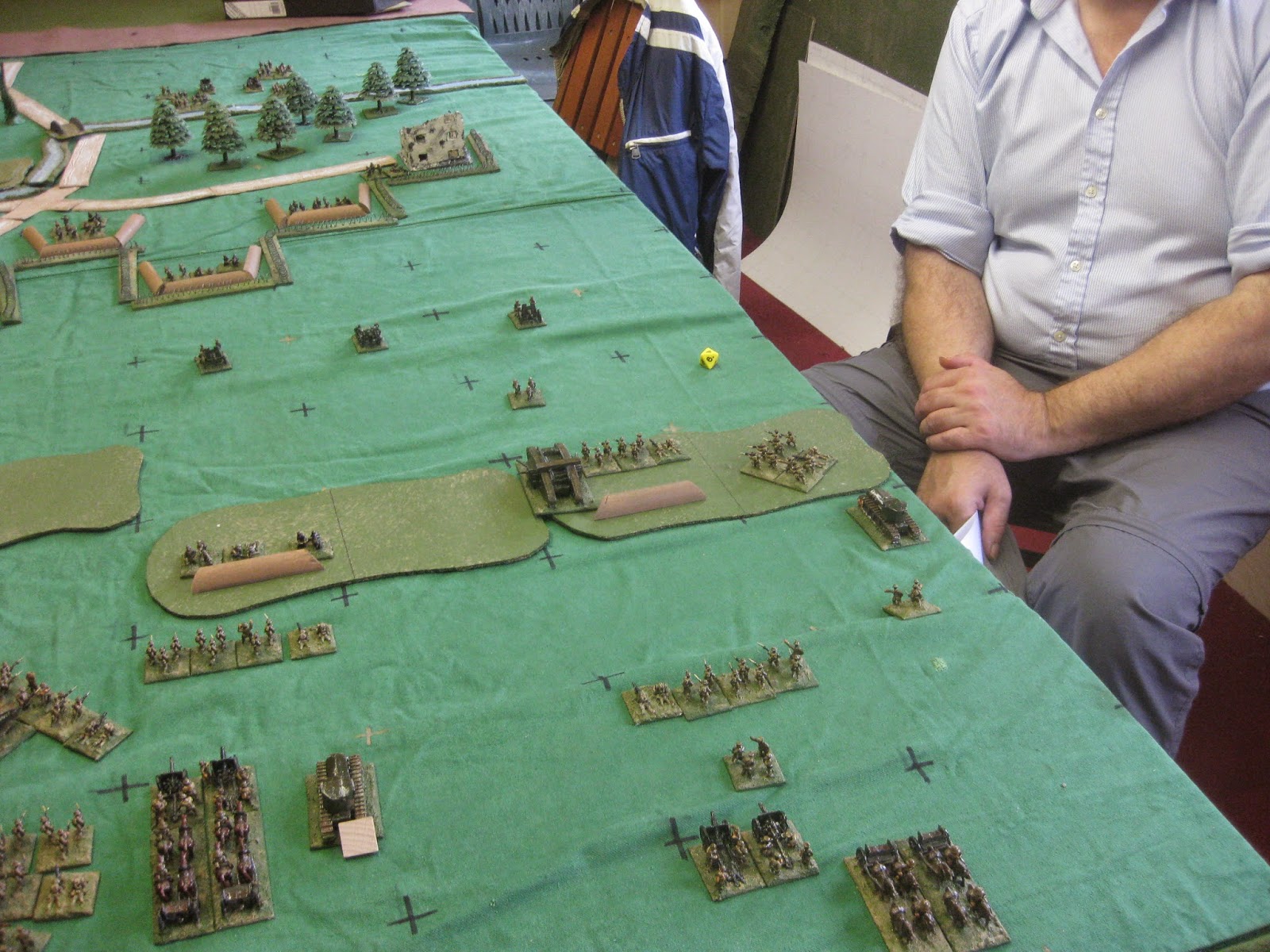 Phil has occupied the position and my remaining defenders are retiring to their guns. Under the rules any assaulting unit loses a base regardless of how well it does, so you do get ground down, even if you're winning. 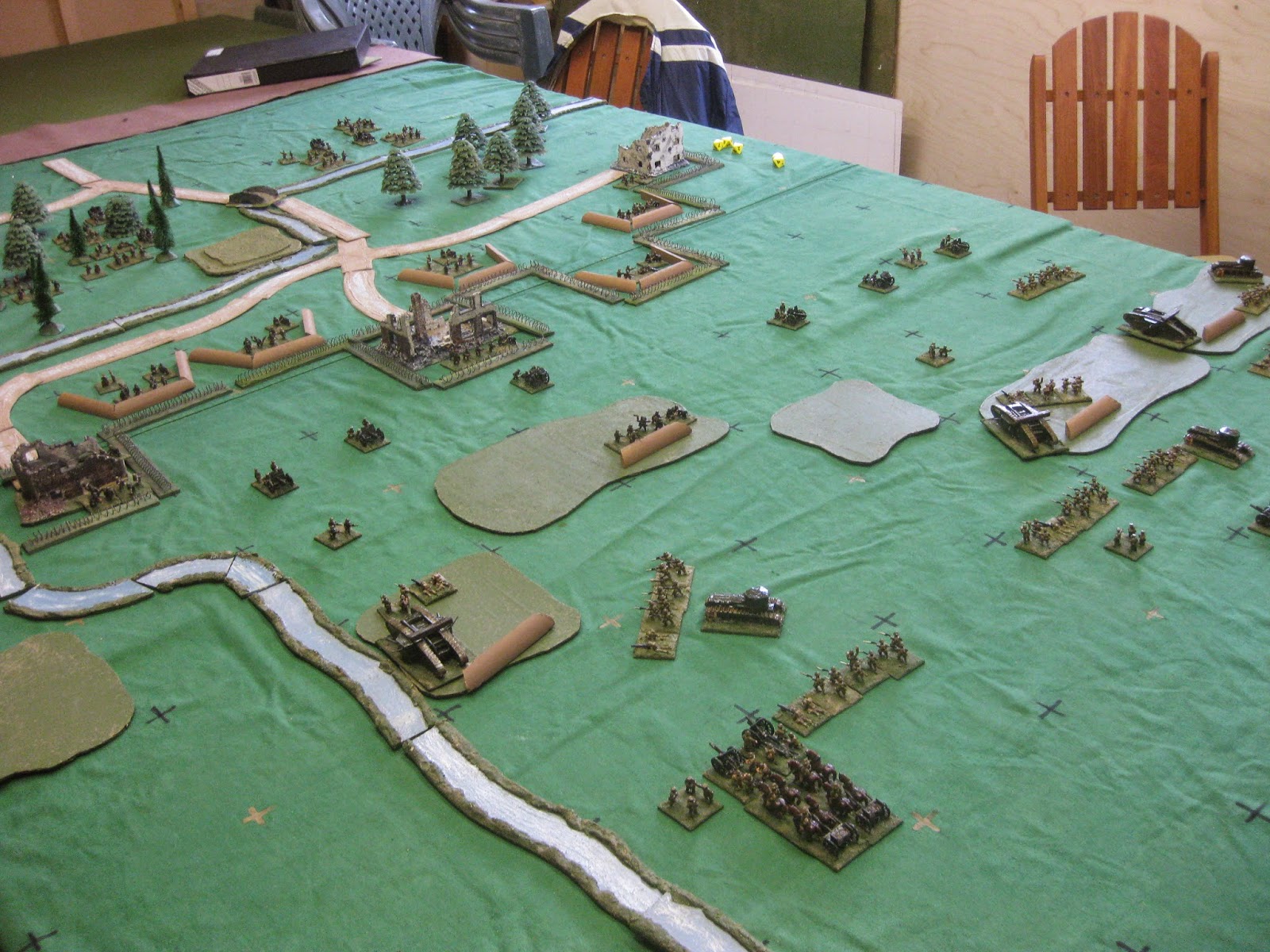 The attach on the British left also went well. Poor command cards in the middle meant that the Germans hadn't been seriously threatened yet, but the other right hand defence post had been overrun by this point. 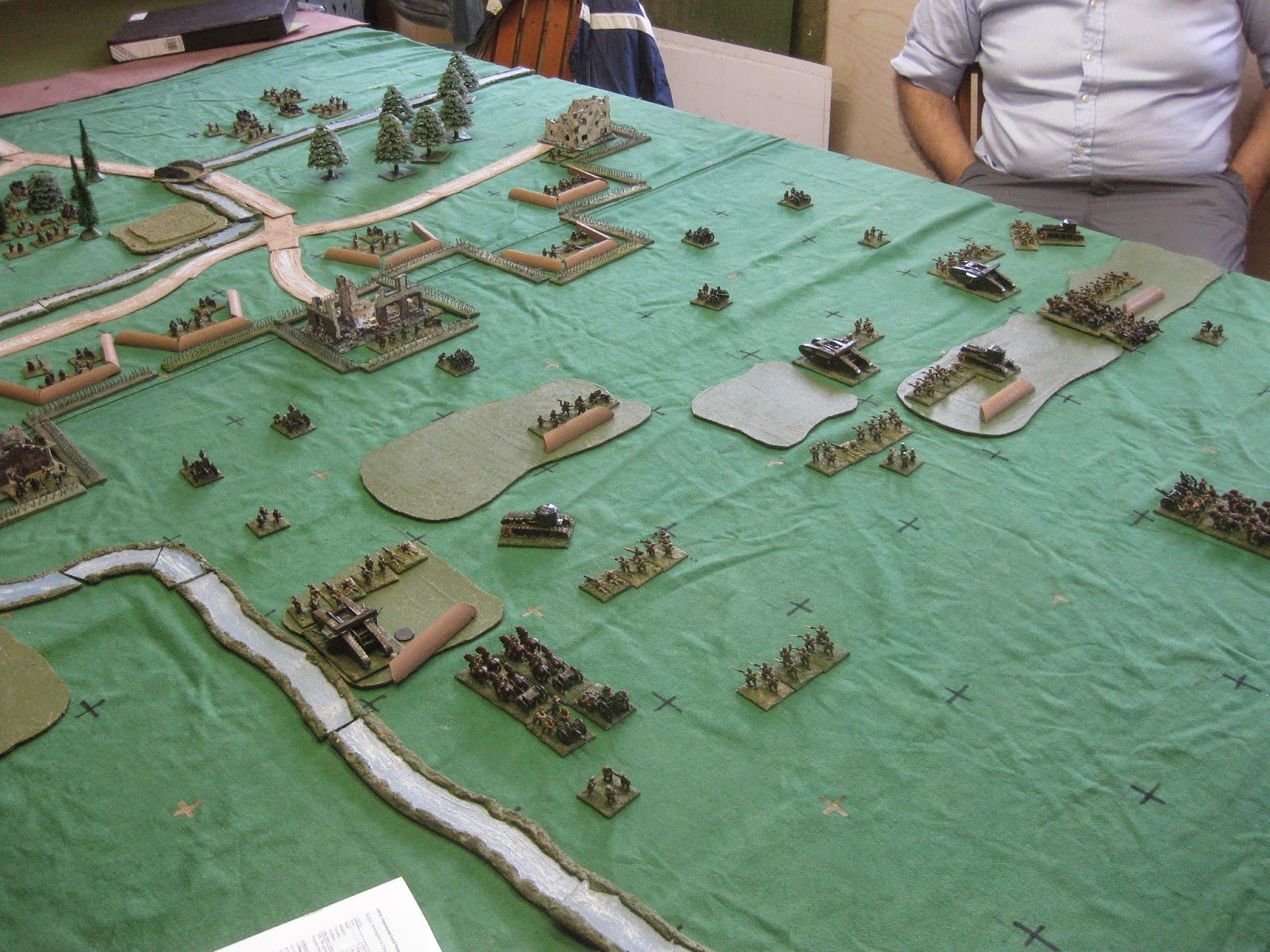 It's looking pretty good for the Brits. Two to three hours into the day (1 turn = c60 minutes) and most of the first phase objectives have been taken. I'm not sure I have the rules quite right for the defenders, and the German half brigade defence points are being taken easily. 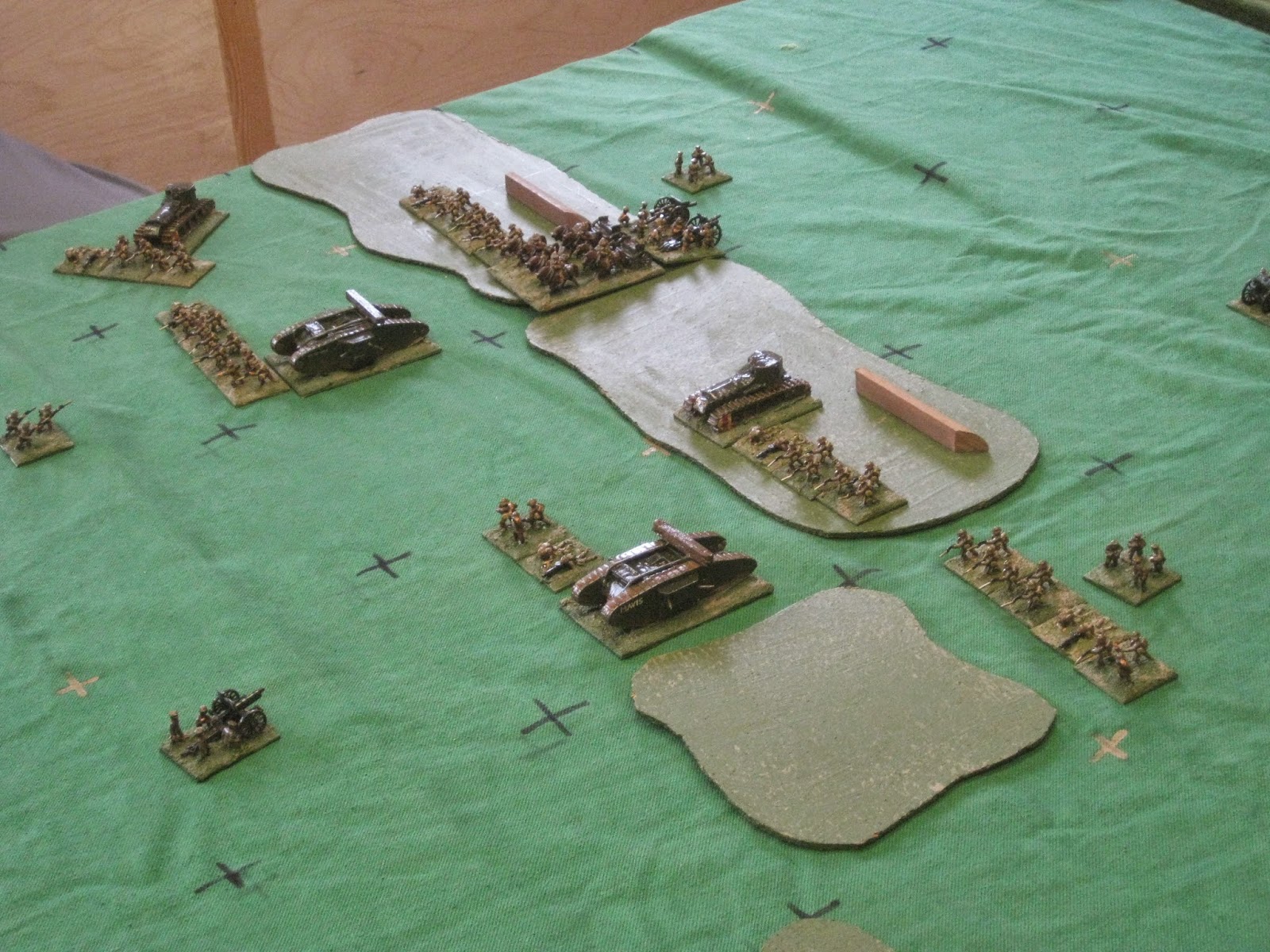 The British roll forward. The German guns are now limbering up to avoid capture (NB: Must buy German limbers). 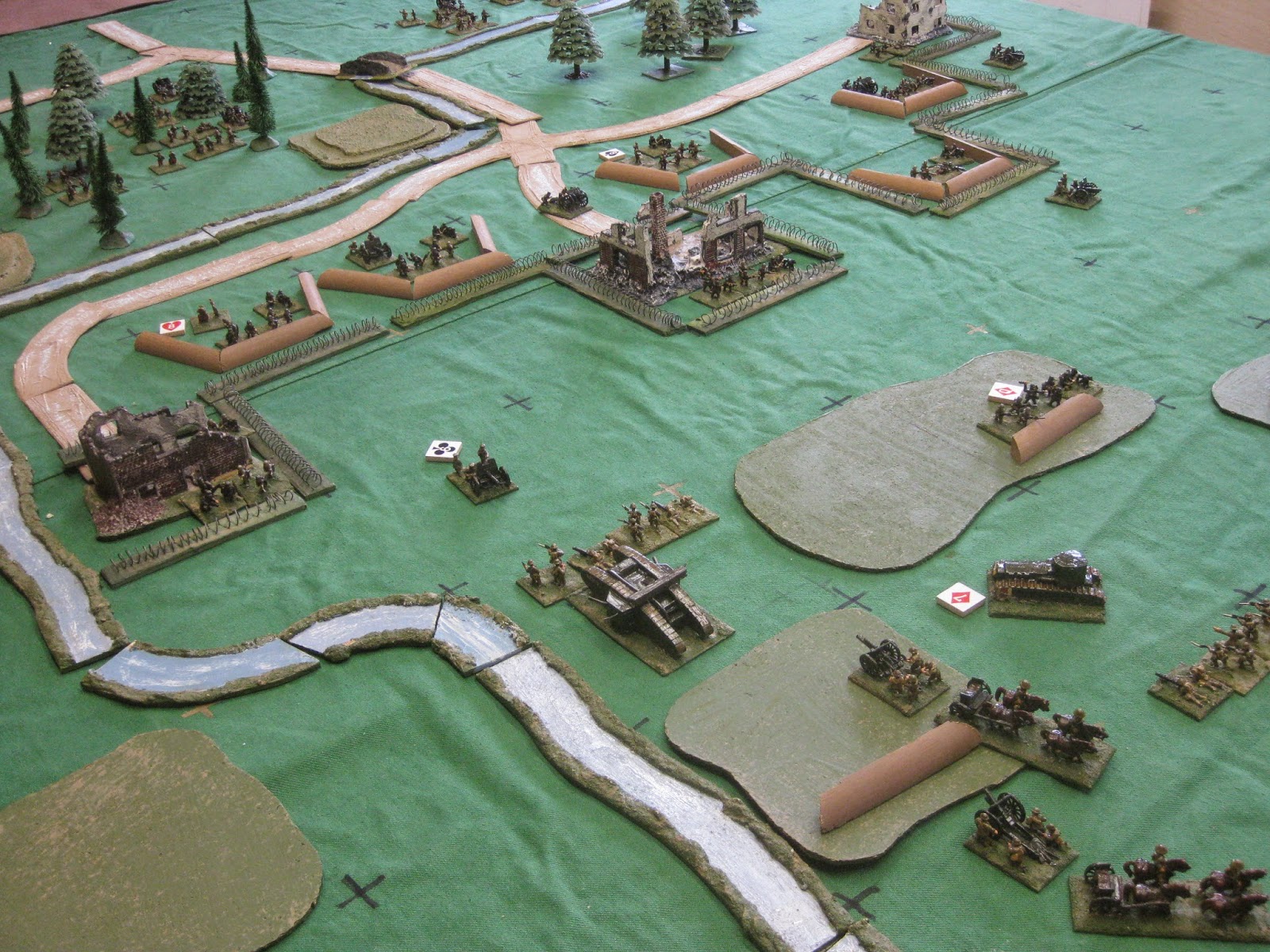 The British left is shaping up well, but there's still a pesky German position in the middle that Phil can't line up for an attack. 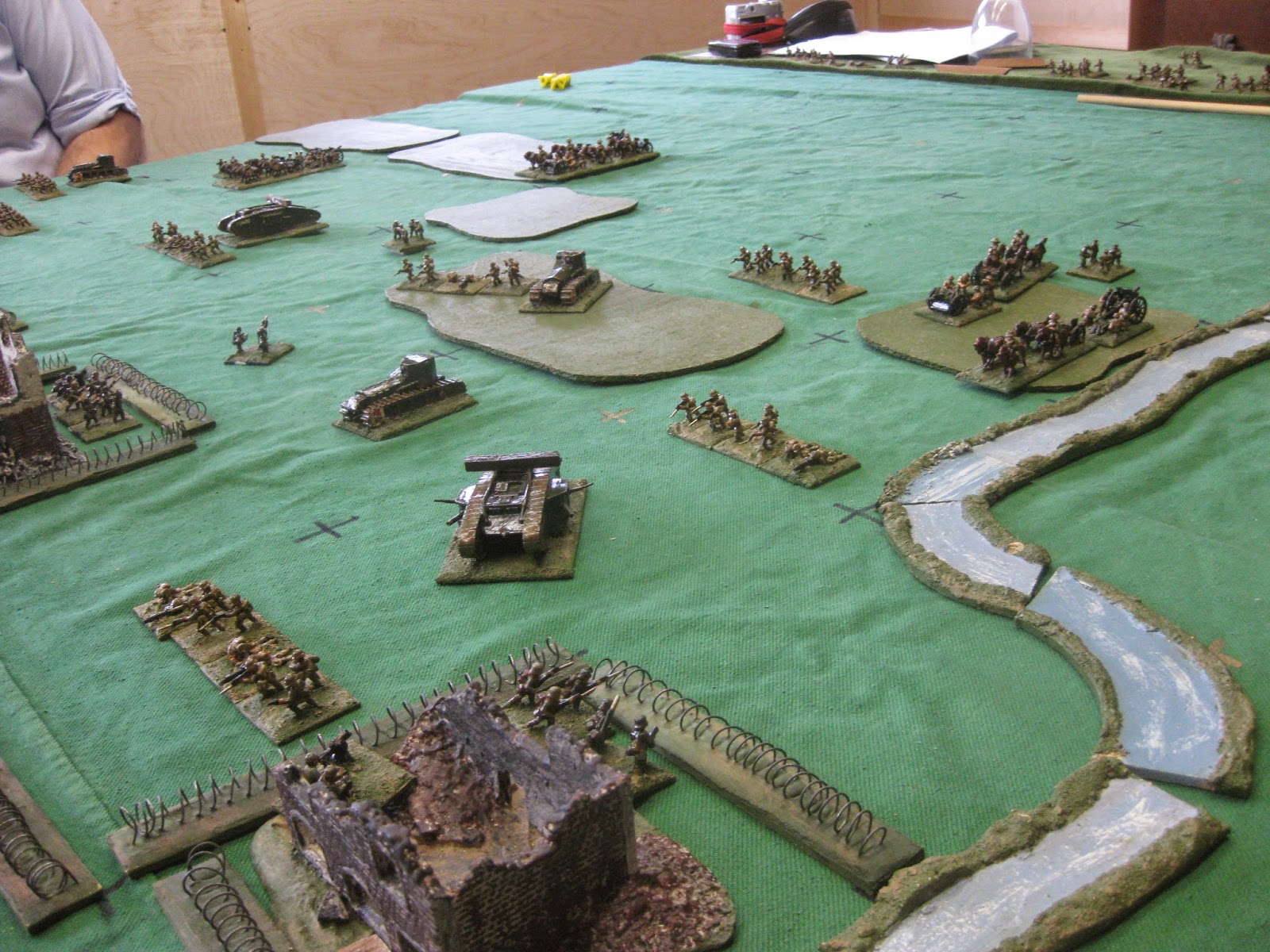 Finally Phil overruns the central position, but I've got all my guns away and these are heading back to reinforce the main defence line. 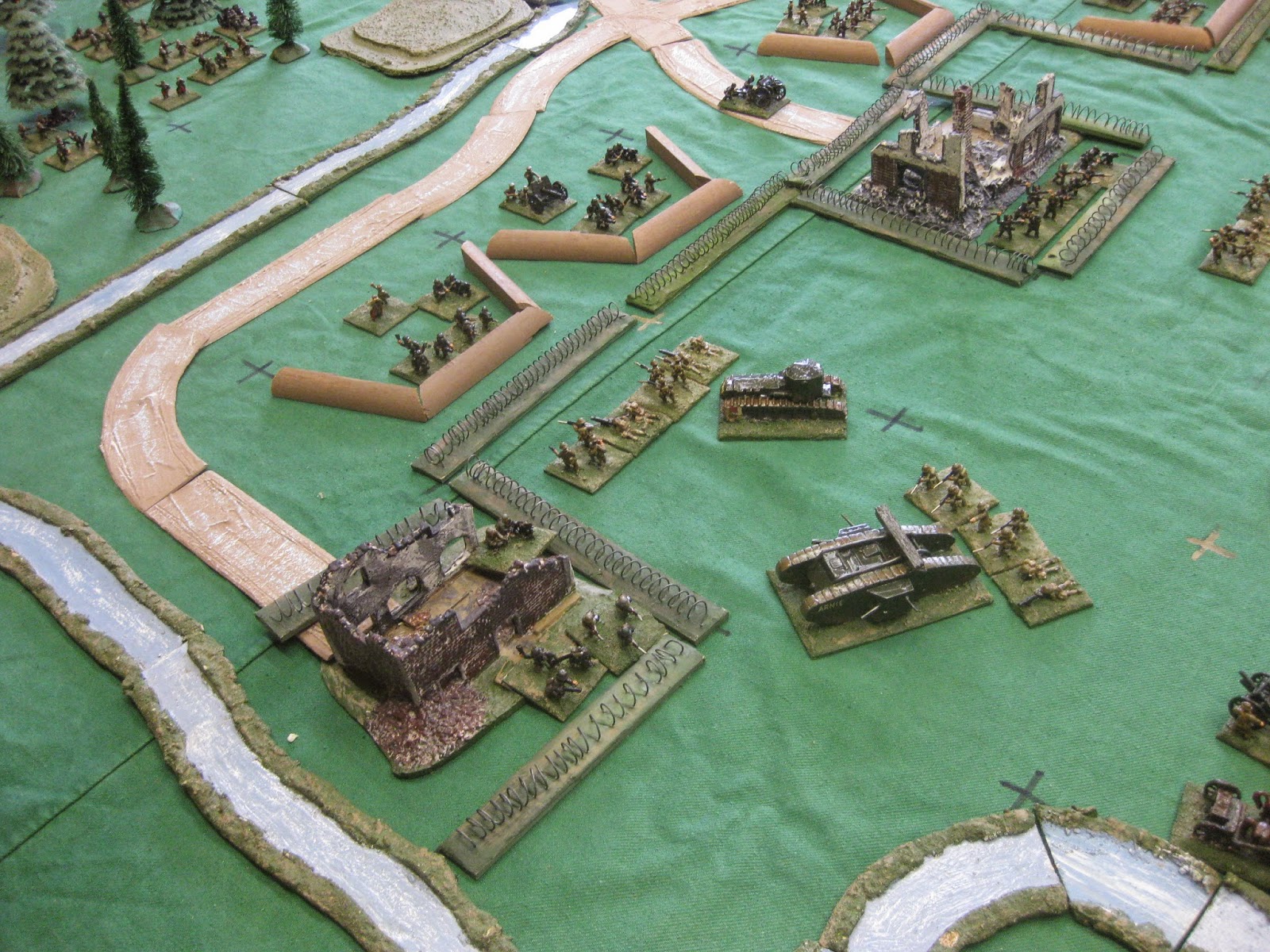 The British are looking to crack the German position on their left with combined all-arms attacks. The cards for artillery fire don't fall out well, and the attack is delayed by a turn. 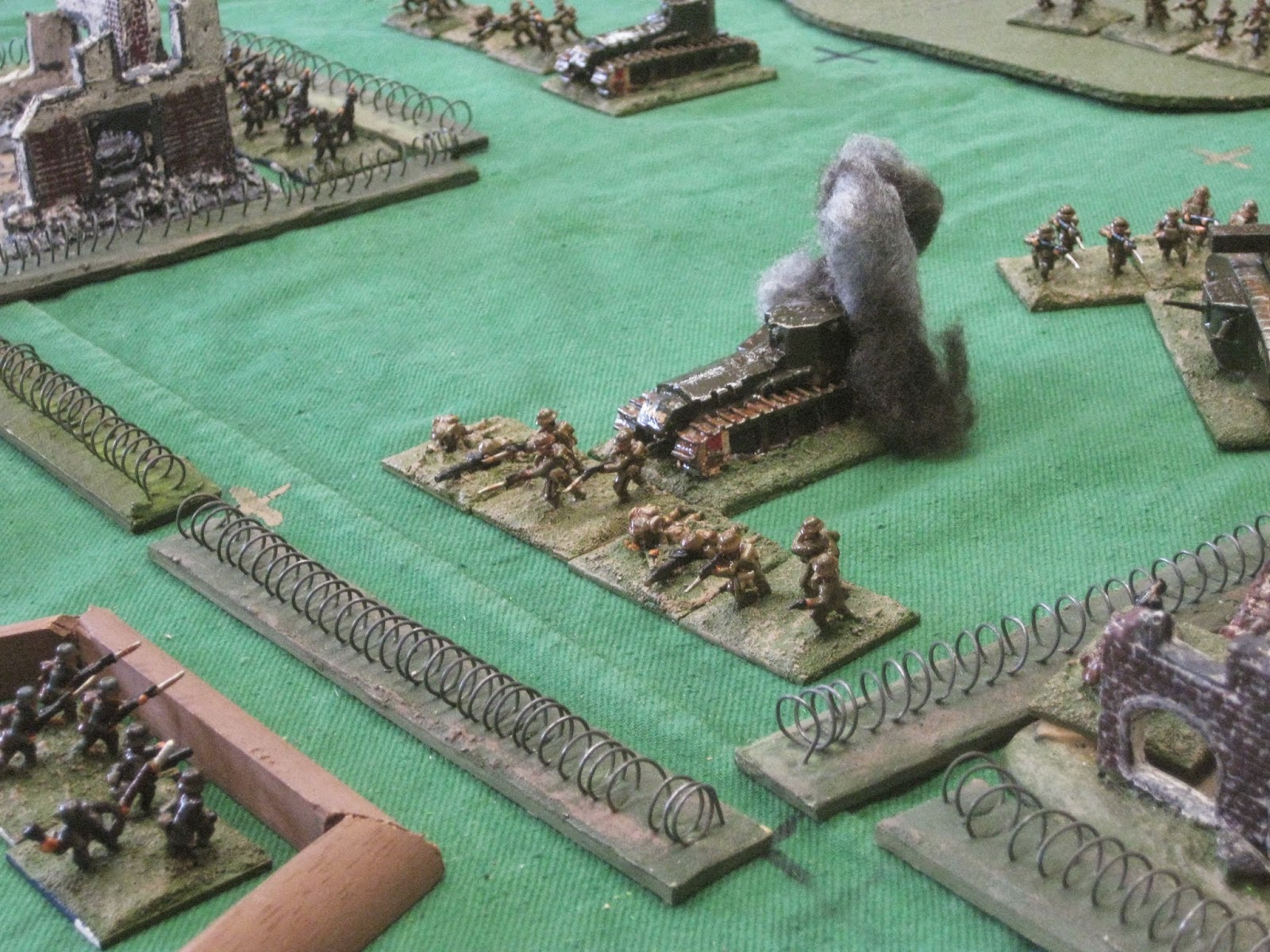 This gives me the opportunity to destroy one of the supporting armoured vehicles. A rare win for the Germans on the day. 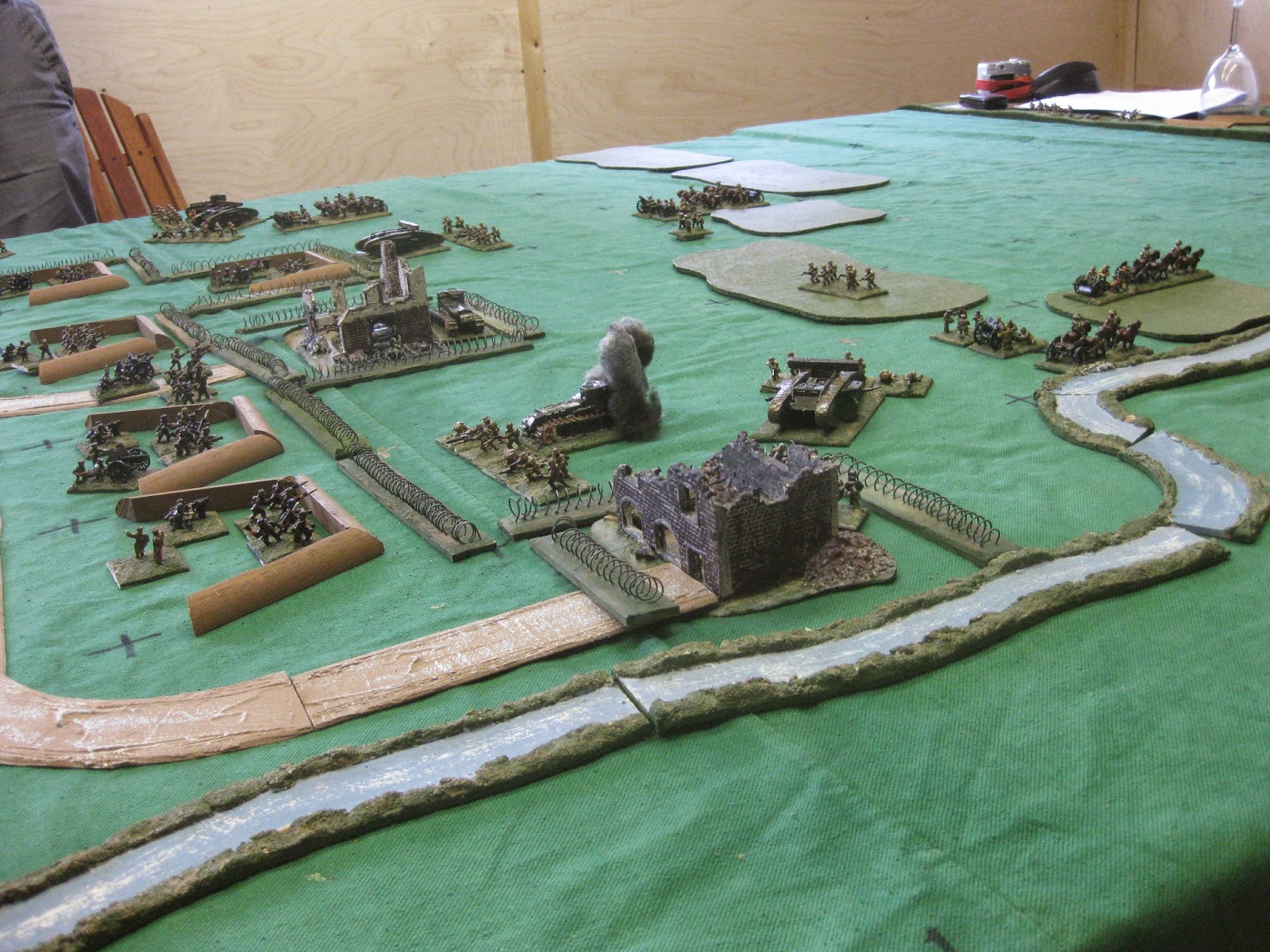 With the inner attack stalling because of the loss of the tank, Phil tried to crack the village strong point by the river. This ended up as a stalemate after a turn's fighting. 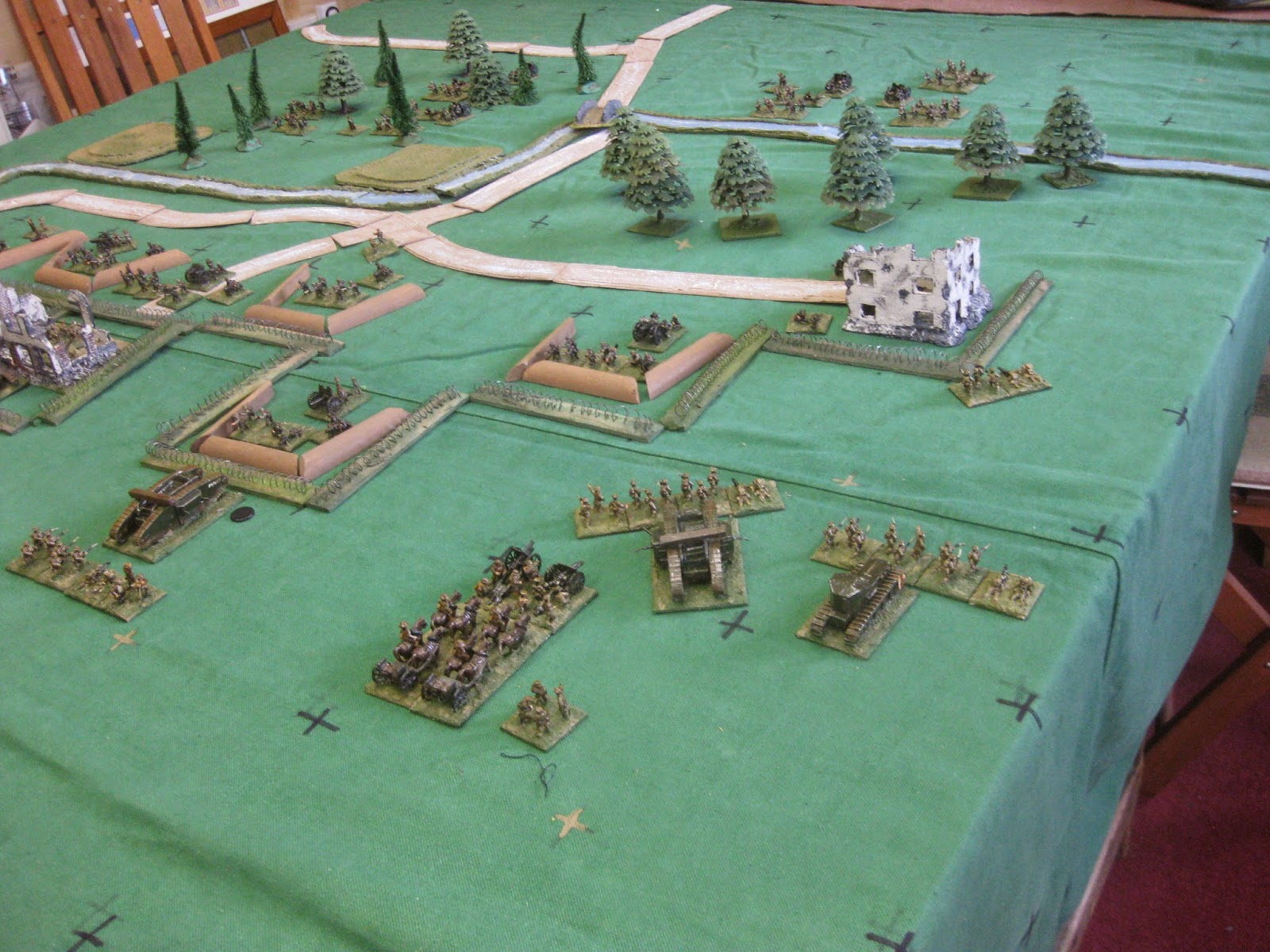 This is the final shot of the game before we wrapped it up. The attack in the middle has stalled due to a vehicle breakdown (see black counter), but everything was lining up for the next push.

It looked to me that the British would take the main line, but be too weakened to go any further, without reserves coming up. So, not a bad day's work, - depending on how effective the German counter attack is.

There are some bits of the rules we weren't sure about, and some things we may want to change. However overall it looked and played plausibly. Think I might try an RCW game in the next few weeks.

(NB The rule authors play using squares half the size of mine, and single figures instead of bases)
Posted by Trebian at 20:30