Where there's no Will

This week's Monday game was Tuesday. At Will's request we did Armati with Successor armies, - Antigonids v Eumenids. Alas Will was unwell and had been taken into Kettering General Hospital* so the game was played by Chris' A & W and me.

I partnered with CW with Antigonus, and CA took the Eumenids. Probably because it had the most elephants. When the deployments were revealed Chris A had gone with all of his pike in depth. We had split the army in two, each of us having a heavy infantry and heavy cavalry division. Chris W had the elephants and normal cavalry. I had the Companion style chaps. 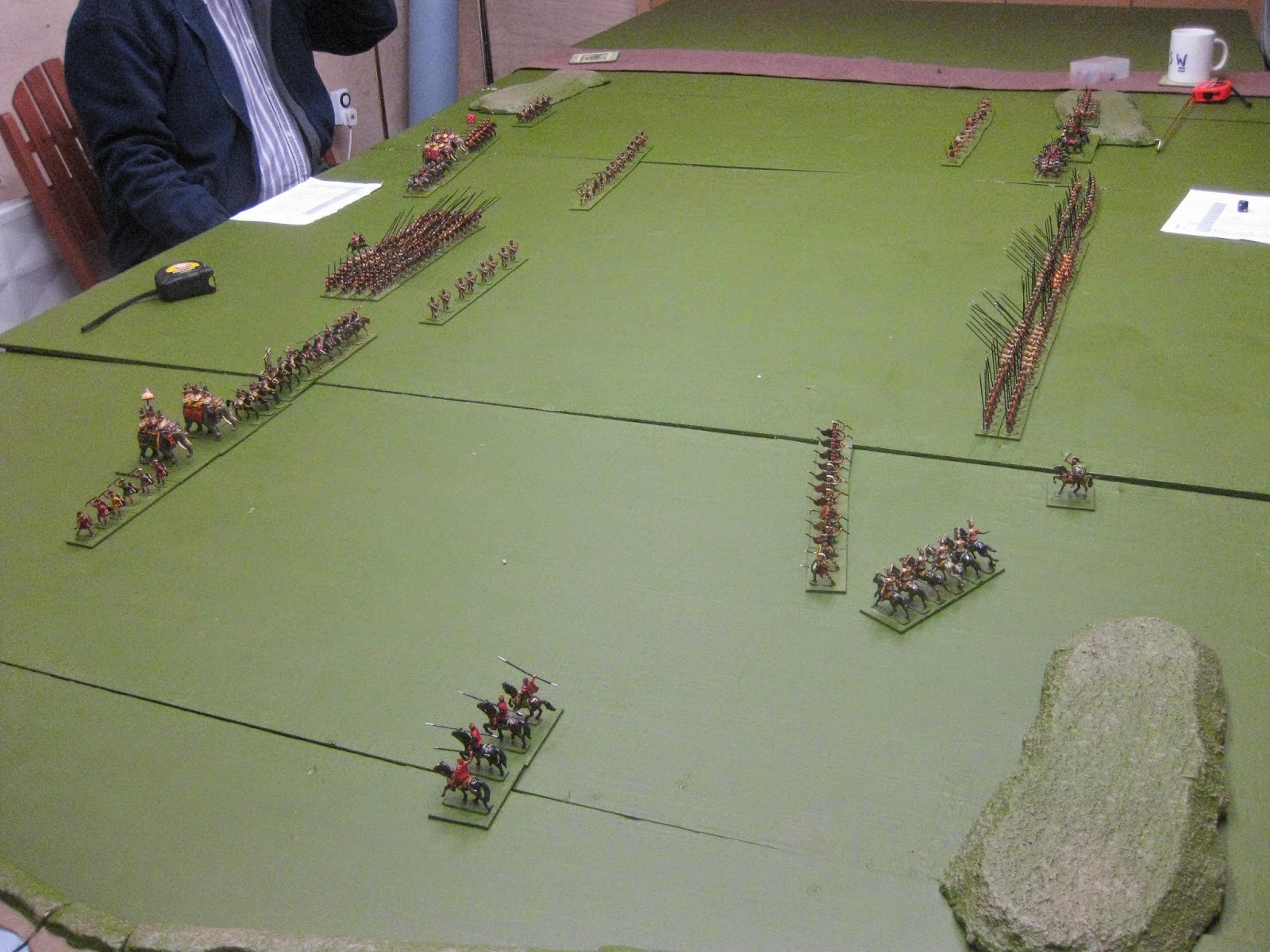 Once the deployment curtain was removed I was facing a heavy cavalry division with embedded elephants. Accordingly I moved my light infantry across to counter the elephant, and lined my Companions up with the internal end of the cavalry line. Our General is moving across to join them. NB We are persisting with deploying the light troops two sections wide for this game. 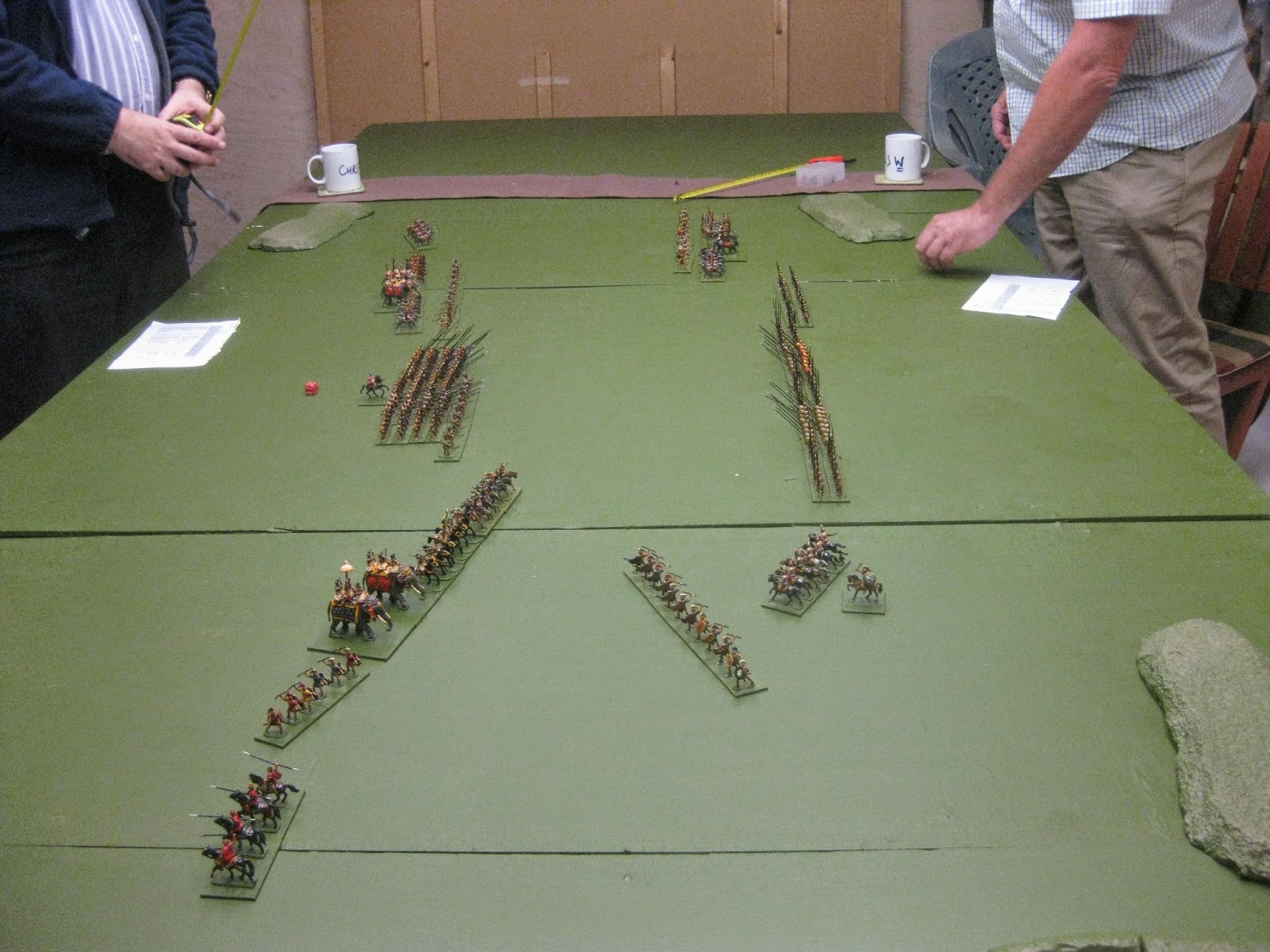 Elsewhere the lines closed slowly. Both of us went out wide with our light cavalry, mine nearest the camera. The others are on the other flank. 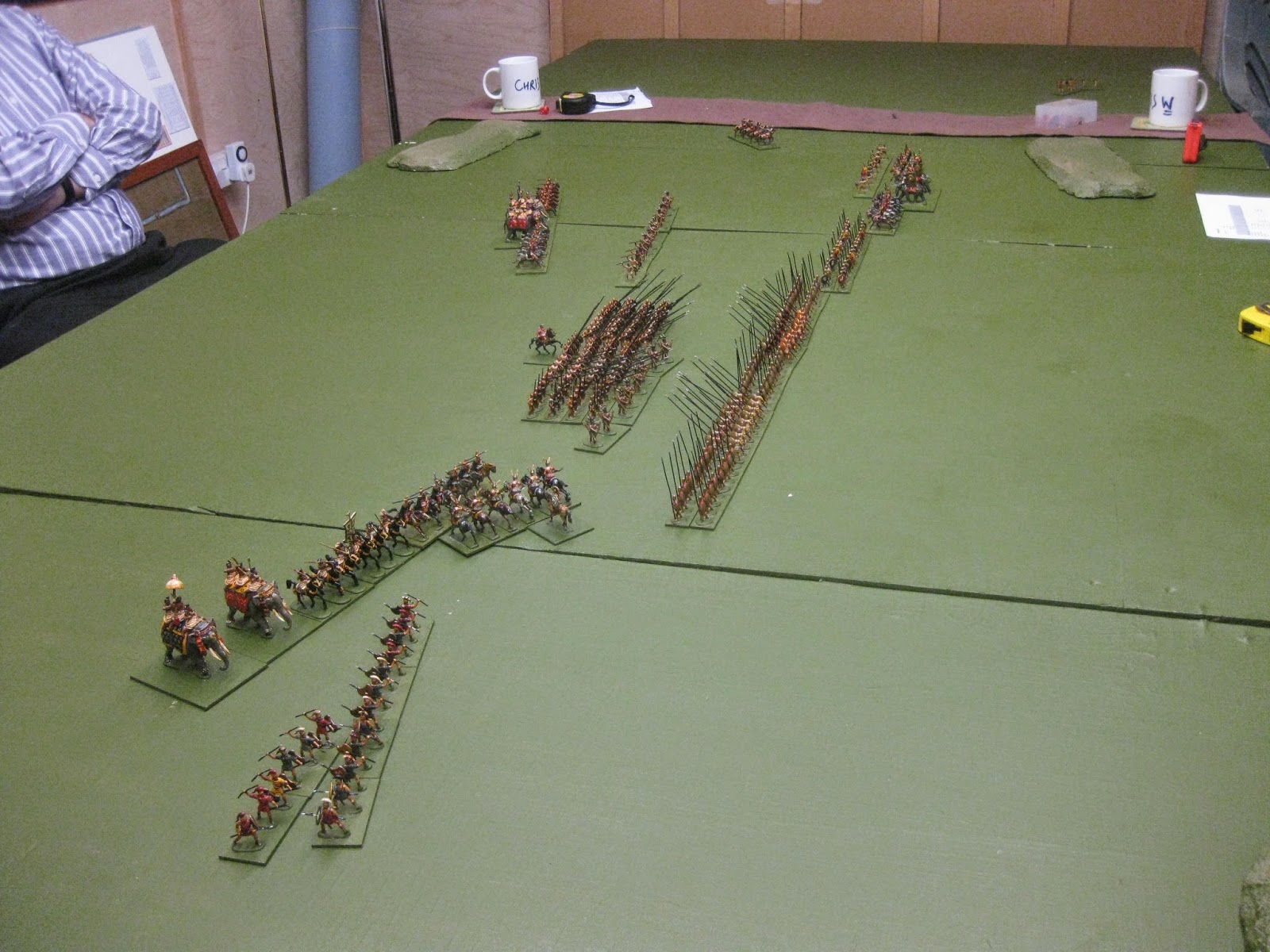 So I reckon I've got this wing sorted. Initially there's some mild issues as I've put the factors for the Indian cavalry down wrongly on the army list I gave to Chris A. He was very good about it. What it meant was he thought I had to make an obligatory charge on them, whereas I knew I didn't. I therefore added Antigonus to my cavalry and clattered the end of the line, with a +2 to the dice. 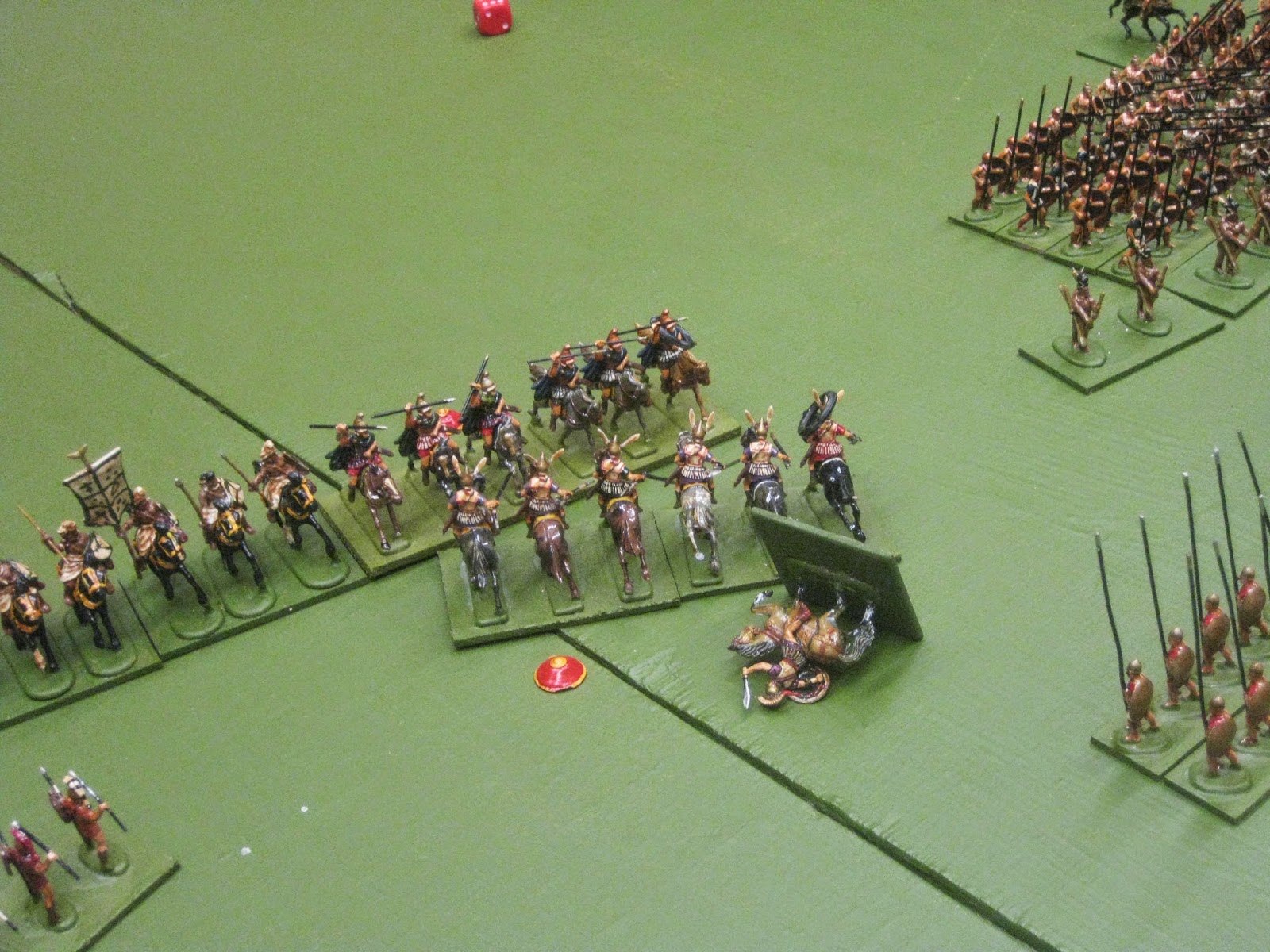 And promptly took a hit and died. Rats. Serves me right, really. BTW - new casualty makers on display. These are the spare shields from the Hat Assyrian Infantry box, painted red. 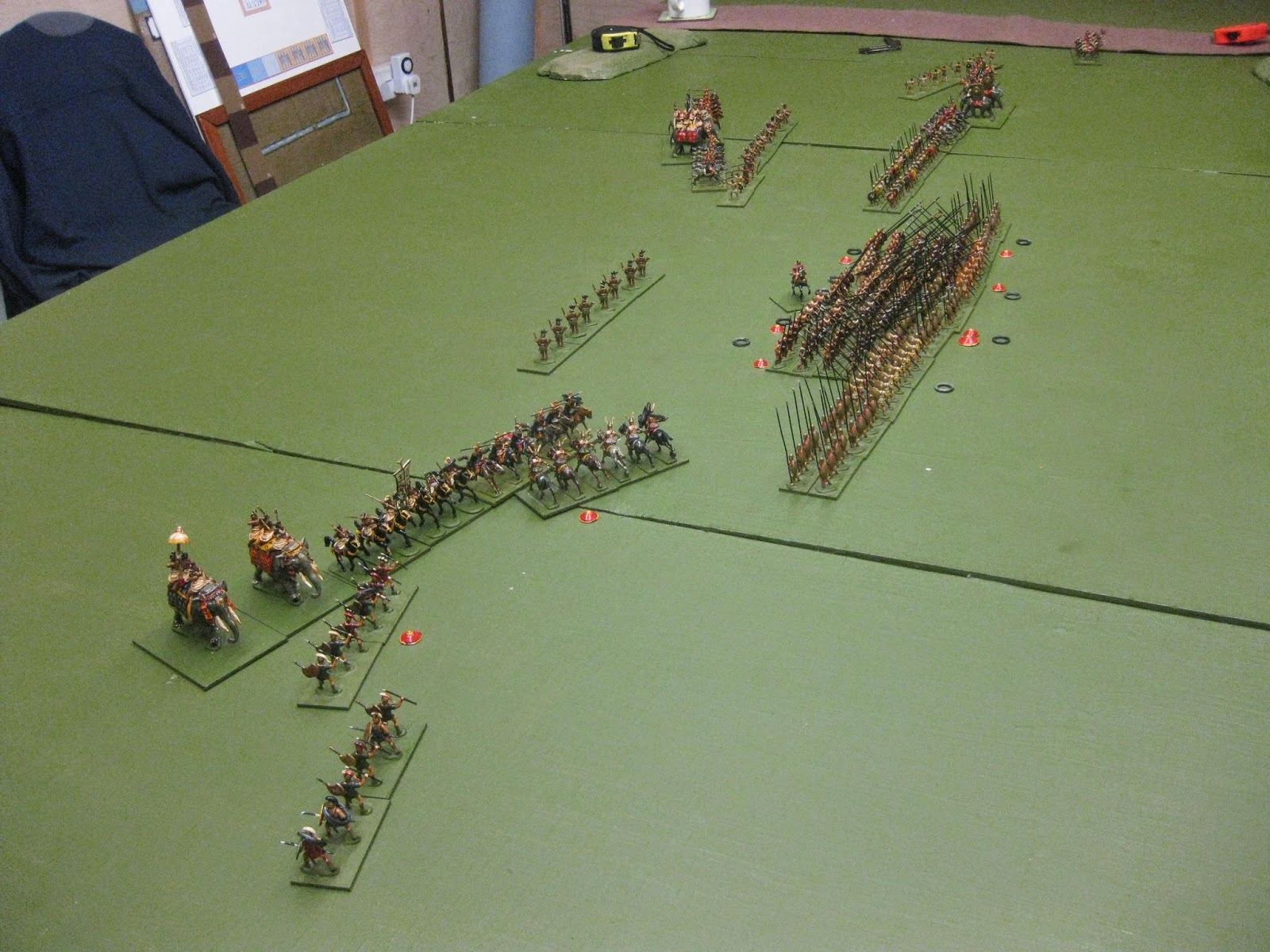 I succeeded in getting my light infantry into contact with the Indian cavalry, but couldn't hit the elephants. My light horse has galloped off into the distance to try and get into the rear somewhere. The central phalanx clash is about evens on the first round, but Chris has got two hits on one of my units, so it's a bit wobbly. Over the back Chris W is closing in on the elephants with his hoplites 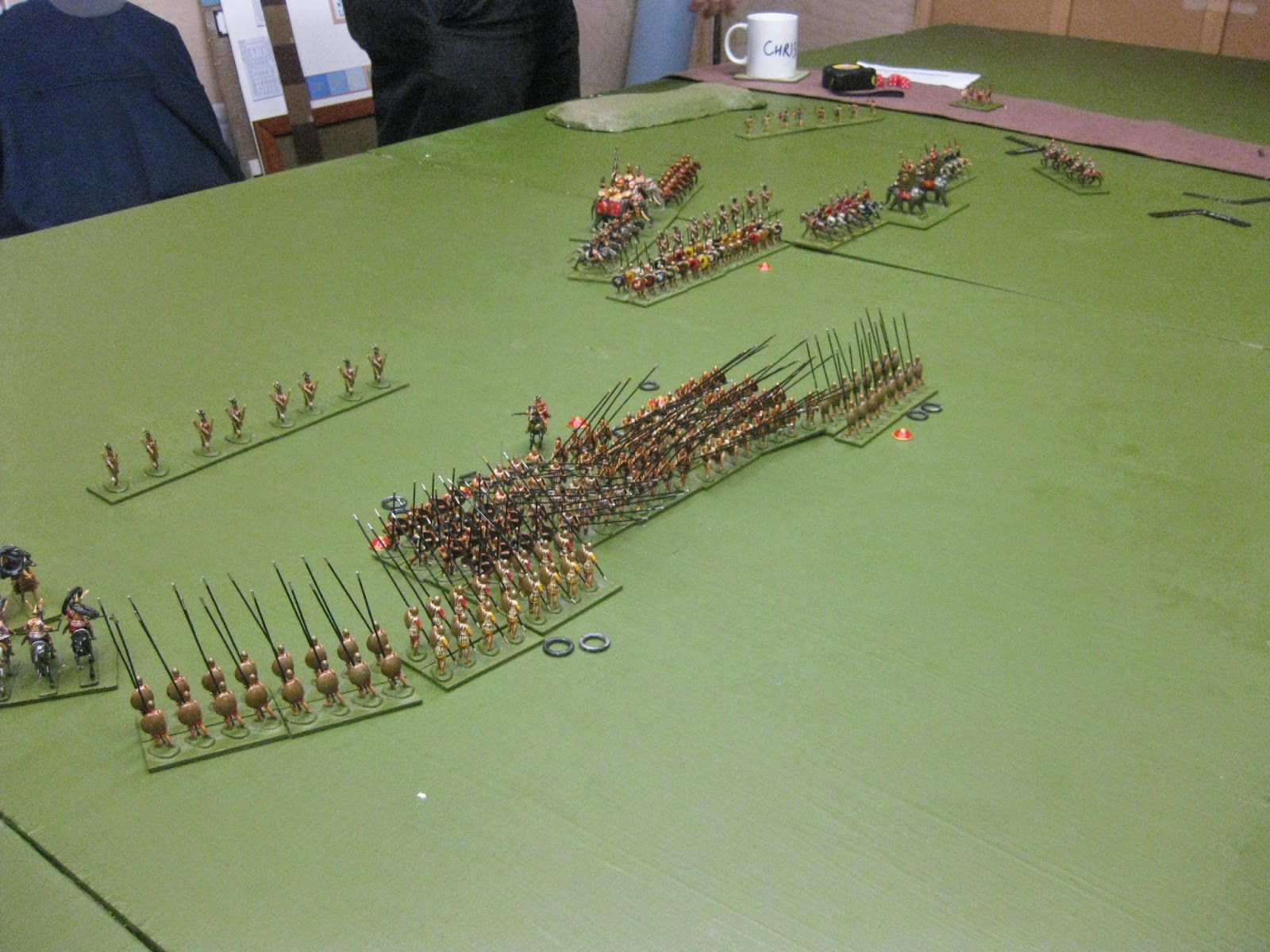 After a couple of rounds of combat it has all gone Pete Tong in the middle. By being in depth Chris has got two or even three units fighting one of mine, and outscores me all along the line. We've also taken a couple of division breaks, so we're losing initiative rolls as well. 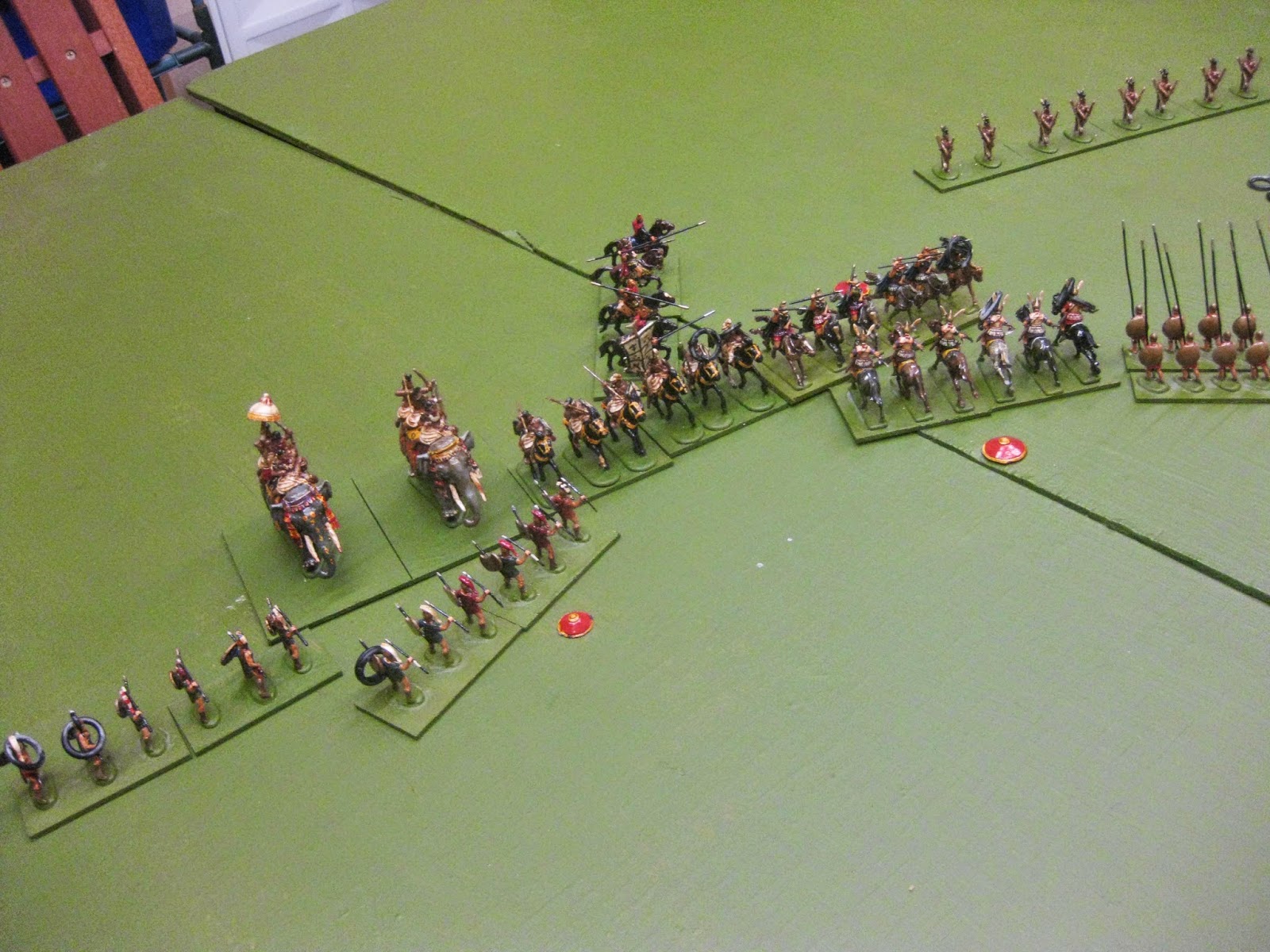 Finally get everything on my flank in place. I've hit the elephants with light infantry, and got my light cavalry into the rear of the Indians. However, it is all taking much too long, and I'm taking too many hits. 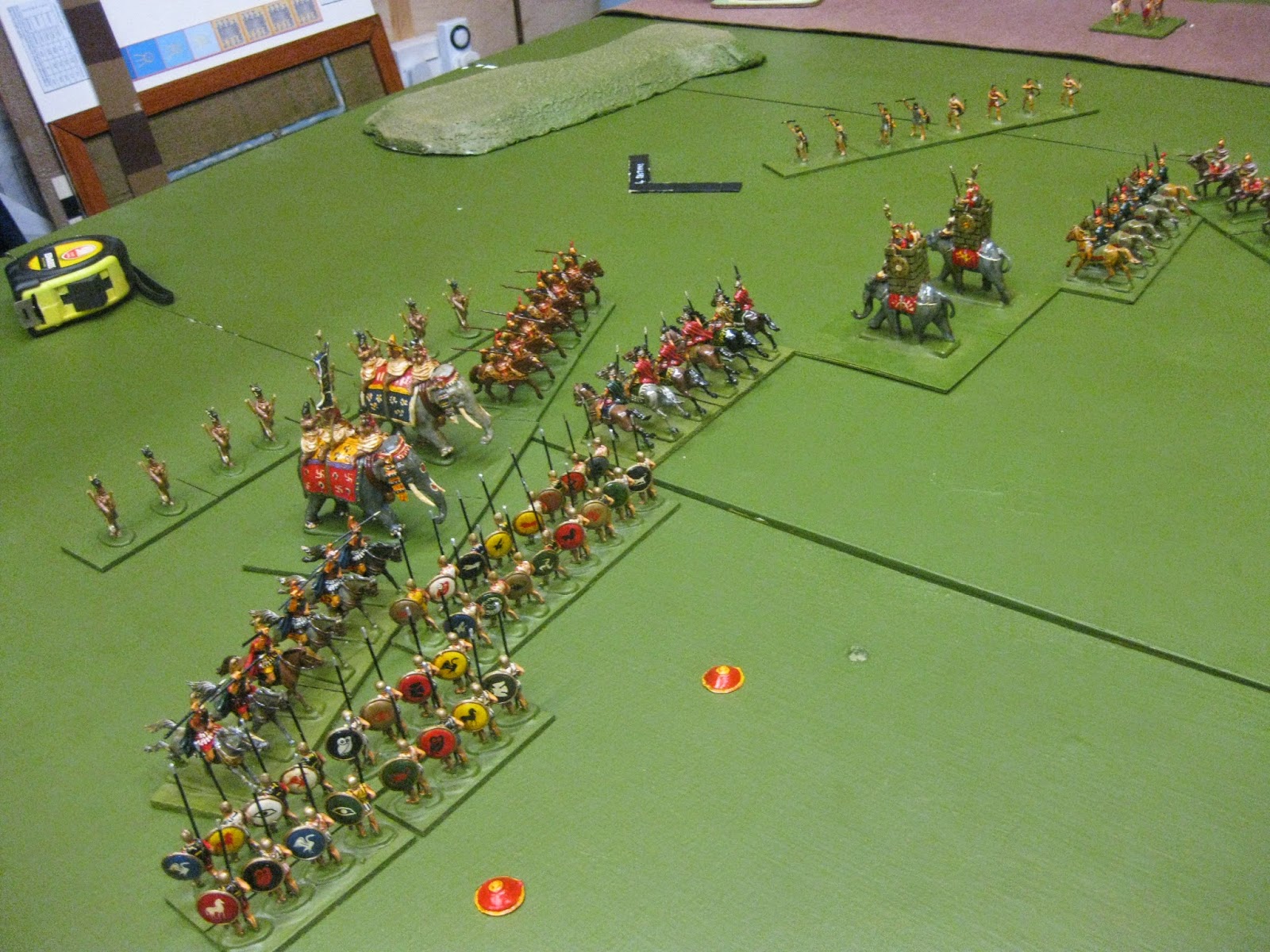 On our right, thanks to some bad advice from me, things are a bit mixed. Chris W has got the hoplites engaged, but is taking more hits than he should. Chris A has pinned his mounted troops in place by a well timed rear charge by his light horse. Due to me using up the Divisional splits, Chris W can't get his elephants into the cavalry in front of him. 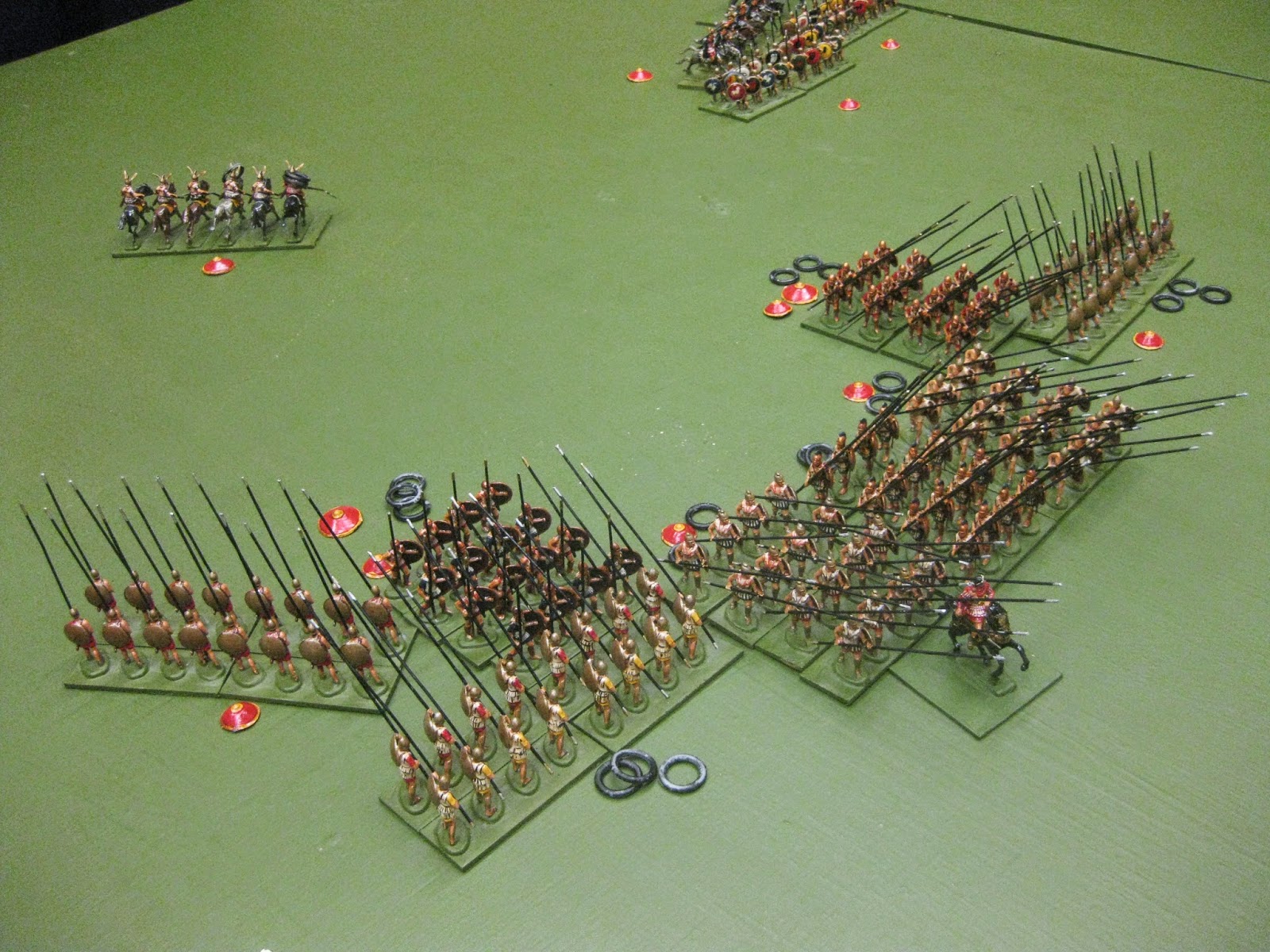 Chris A has bust through my centre, just as I finally get my end phalanx into the flank of the end unit. In fact this was unnecessary, and a waste of a divisional split as I beat him from the front any way. 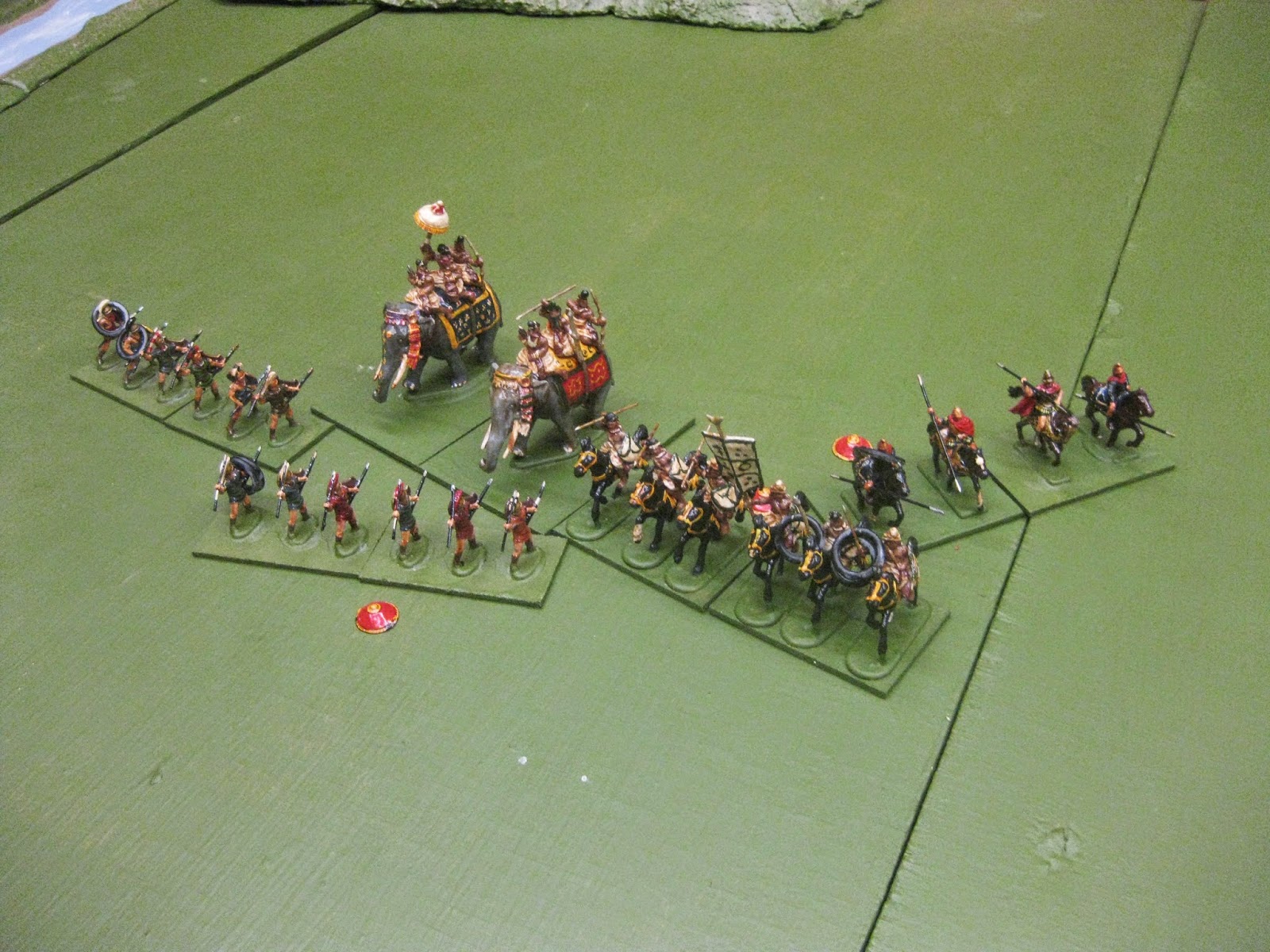 Finally I break that end cavalry unit and gallop off into the enemy rear That's why my unit isn't in the picture. 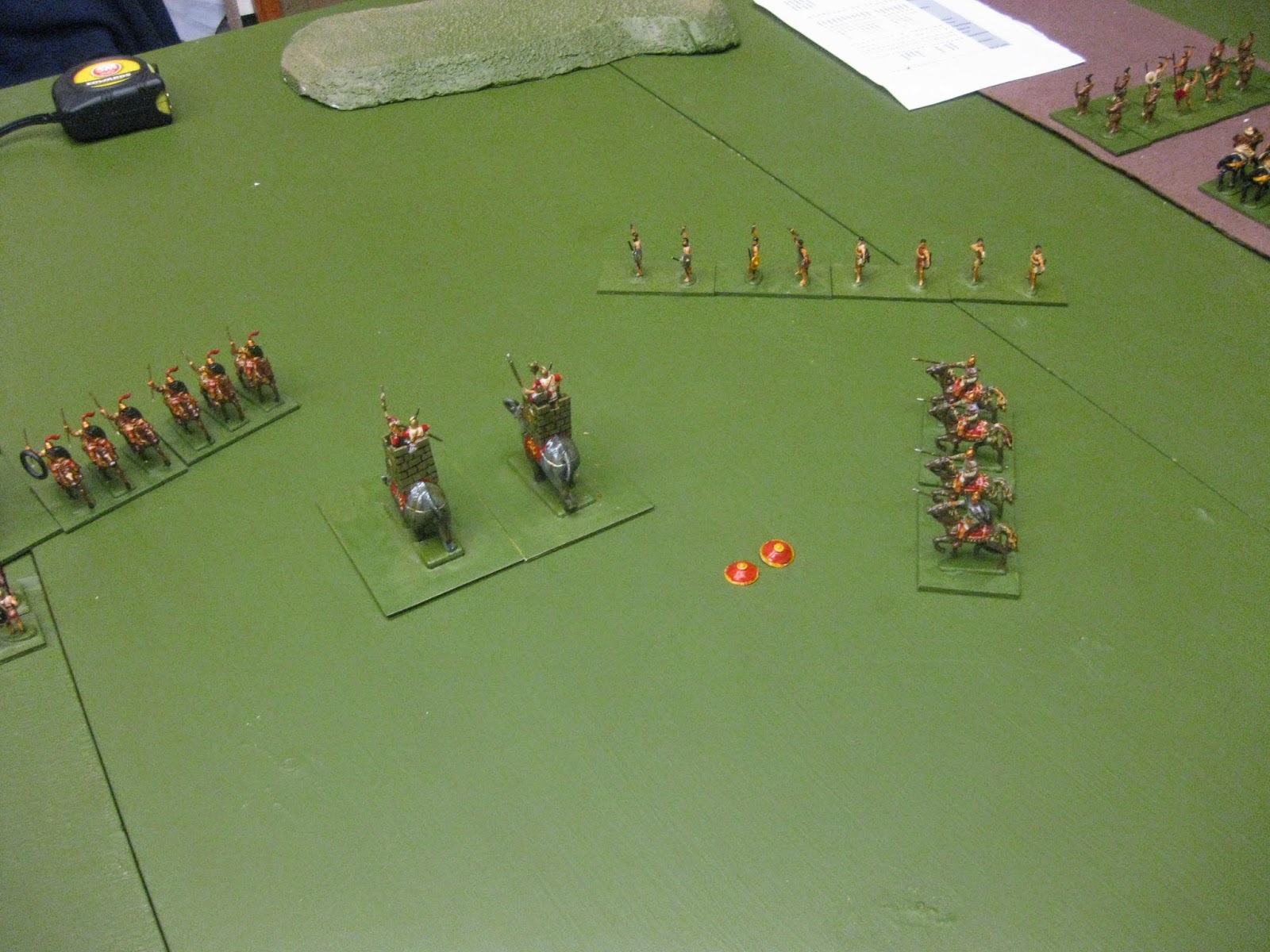 Damn. That cavalry unit over on our right breaks. The initiative was key in the last round, as we had two Eumenid units on the point of breaking, and only needed one. However, Chris got the melee direction and broke us first. 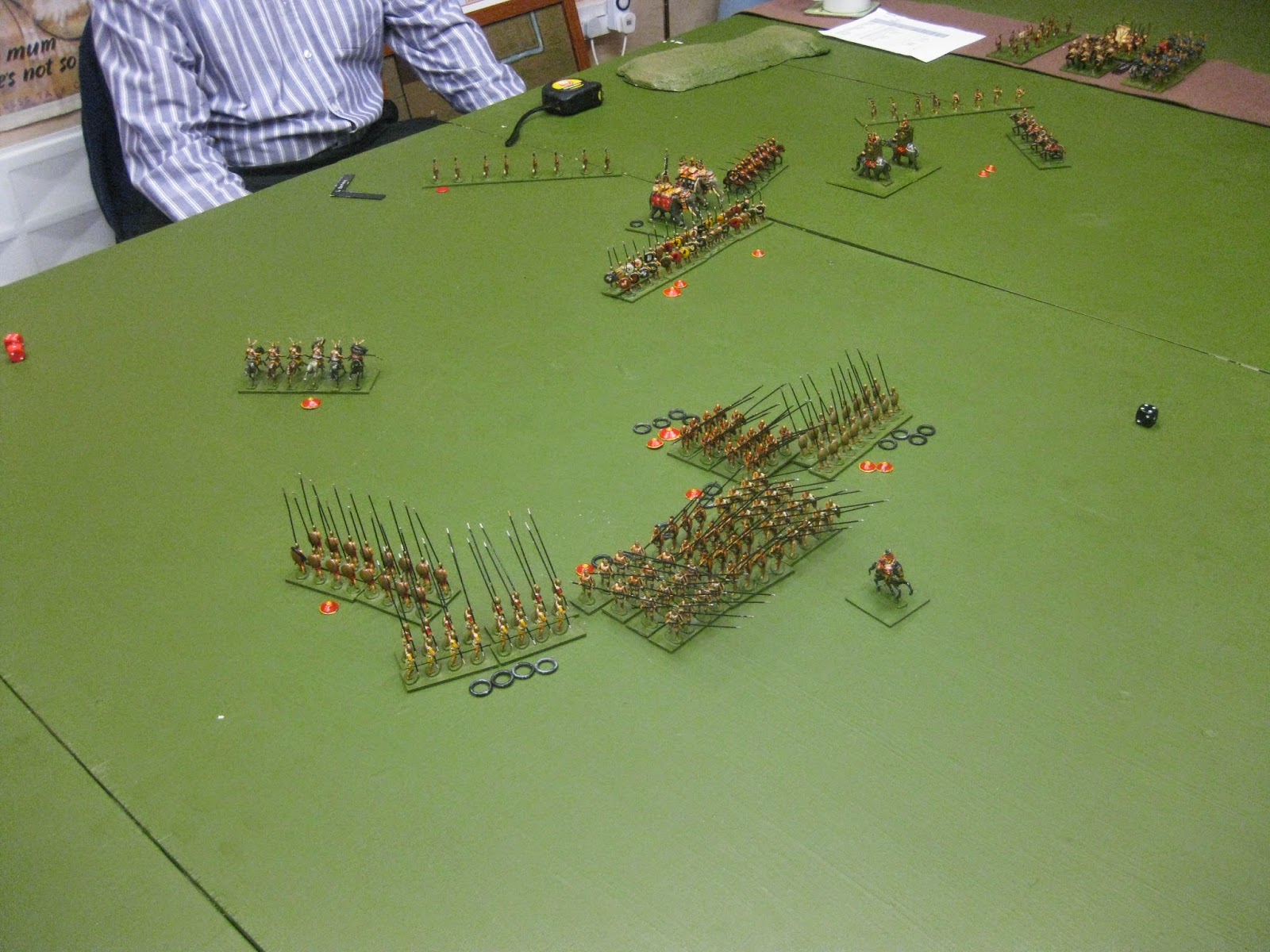 In the end it was much closer than it looked like it would be. I probably lost us the game by taking a divisional split when I actually didn't need it.  The Successors are always good for a match up, as the armies have a wide range of troop types. Deploying the lights two wide also makes a major difference.

*At the time of writing Will is still in the KGH but feeling much better.
Posted by Trebian at 12:52