A year or so back Mrs T and I had a holiday in China.  On the last day in a park in Beijing I saw some wooden model building kits. I bought two, one of the Tienamen Gate and one of a traditional courtyard house.  They were about 15 mm scale.  I know - I took some figures with me to check the size of likely purchases.

I built the gate pretty much as soon as I got home. The Courtyard house was more of an issue. I really wanted to break it up into smaller pieces, but the instructions are quite complicated and I couldn't work out how the bits made the buildings. I therefore wimped out and put it on the shelf.

However, now I'm back painting Taipings the time had come to put it together. About 30 minutes. 45 tops to get it done I thought.

Actually closer to five hours, I think. And the pieces are a tight fit. No glue required, but pushing the pieces together isn't kind to the fingers.

Anyway, I don't know what I'm going to do with it, but I think you'll agree it looks lovely. Wish I'd been able to buy another one to experiment with. 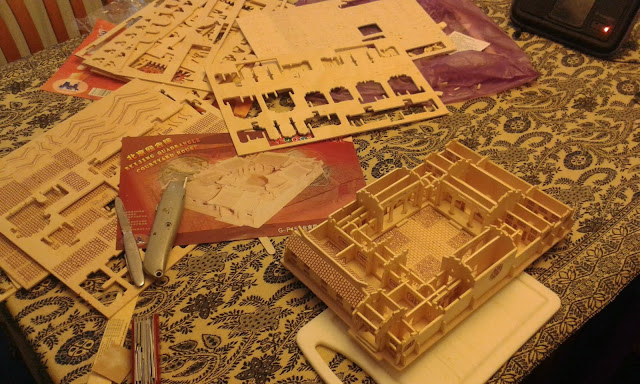 So, part way through the build. You can see the skeleton taking shape, and the press out templates. The instructions recommended pushing all of the pieces out first, but I thought that was a good way of losing them and not being able to track what goes where. 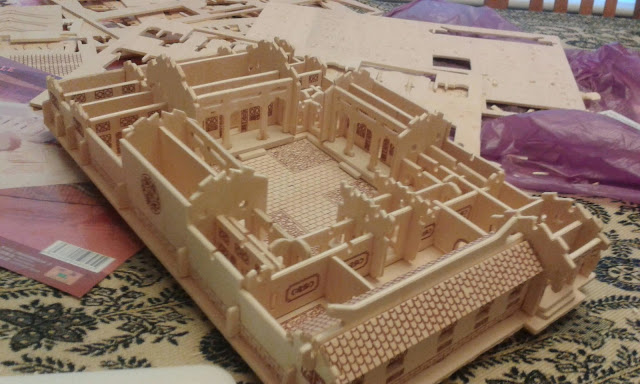 A close up of the construction. The quality isn't bad. The precut pieces are mostly pre-cut all the way round. There was one minor tooling error in the base, with the slots being out by a couple of millimetres. This made it quite hard to push together, but a bit of BF&I fixed the problem. 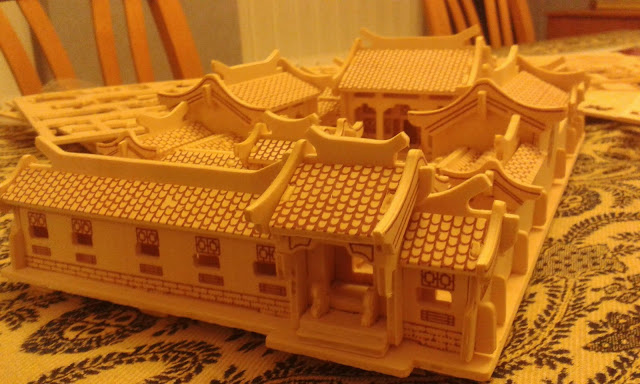 Finished at last. Here's a shot of the doorway and the two Lions guarding it. 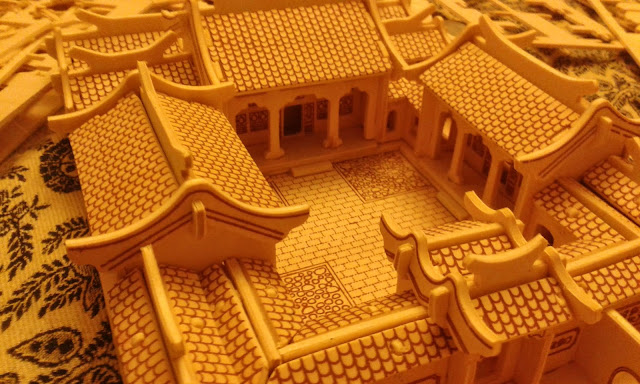 The Central Courtyard is printed onto the base board. It's mostly lined up with doorways. 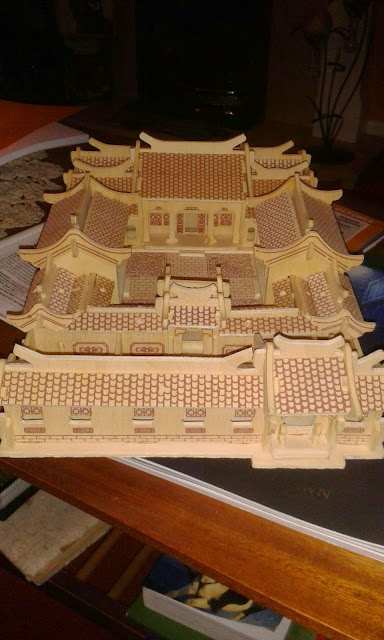 I managed to get a final shot without flash, which shows the natural colours better. Now I can see it in one piece it looks like I can divide it up into half a dozen buildings or wall sections with a fret saw. This is a similar problem to the old Airfix La Haye Sainte model. Nice to have, but it takes up a lot of space and is actually more useful as three component buildings.

Anyway, it's done now, If I cut it up I'll be able to paint it as well, At the moment it's a bit awkward to do.

Finally, as I know people will ask, I have been unable to find any more of these on line. The manufacturers name might be "Human Article" or it might not. They also do a model of the Temple of Heaven in Beijing. That, and the Tienanmen Gate, might be findable on line as re-sellers have them as "Great Buildings of the World".

Just a warning, - if you do find any despite what it says on the package it isn't a toy and a child of the age of 12 would struggle to assemble it. And it does play merry hell with your finger tips.
Posted by Trebian at 10:05