We haven't done any ACW riverine warfare for ages. I'm not normally interested in the ACW (I'll explain why should we ever meet at a show) but the river campaigns are a hoot.

I got interested at a COW many years ago when RFCM's "Hammerin' Iron II" was newly out c1999. I got completely slaughtered and hardly moved any ships but still loved it. Must be a good game.

So I bought a few ships and have added to them on and off over the years. I used to run it on the Friday evening before Brixcon and so am responsible for a fair few people acquiring brown water navies.

Okay so my board is blue not brown, but that's the compulsory colour for wargaming water. It's a tradition or an old charter or something..

The team for the evening ended up just being me & Will. Of the Chris' one was overrunning on his daily DIY quota, and the other was turned back buy police when they sealed the village off.

I set up a simple scenario. The Confederates are trying to get a VIP down river and so have to exit his ship off the far end of the table. The VIP is on the General Bragg. He has an escort of a couple of light schooners (the Tulip and the Fuschia) and two ironclads, the Arkansas and the Palmetto State.

The Unionists just want to stop any Rebs sailing downstream. They've got three small schooners out on picket duty (the Miskatonic squadron of the Innsmouth, the Dunwich and the Arkham under the command of Captain Lovecraft) and some other ships off the table in reserve, - the Cairo, the Carondelet, the Essex and the Blackhawk. 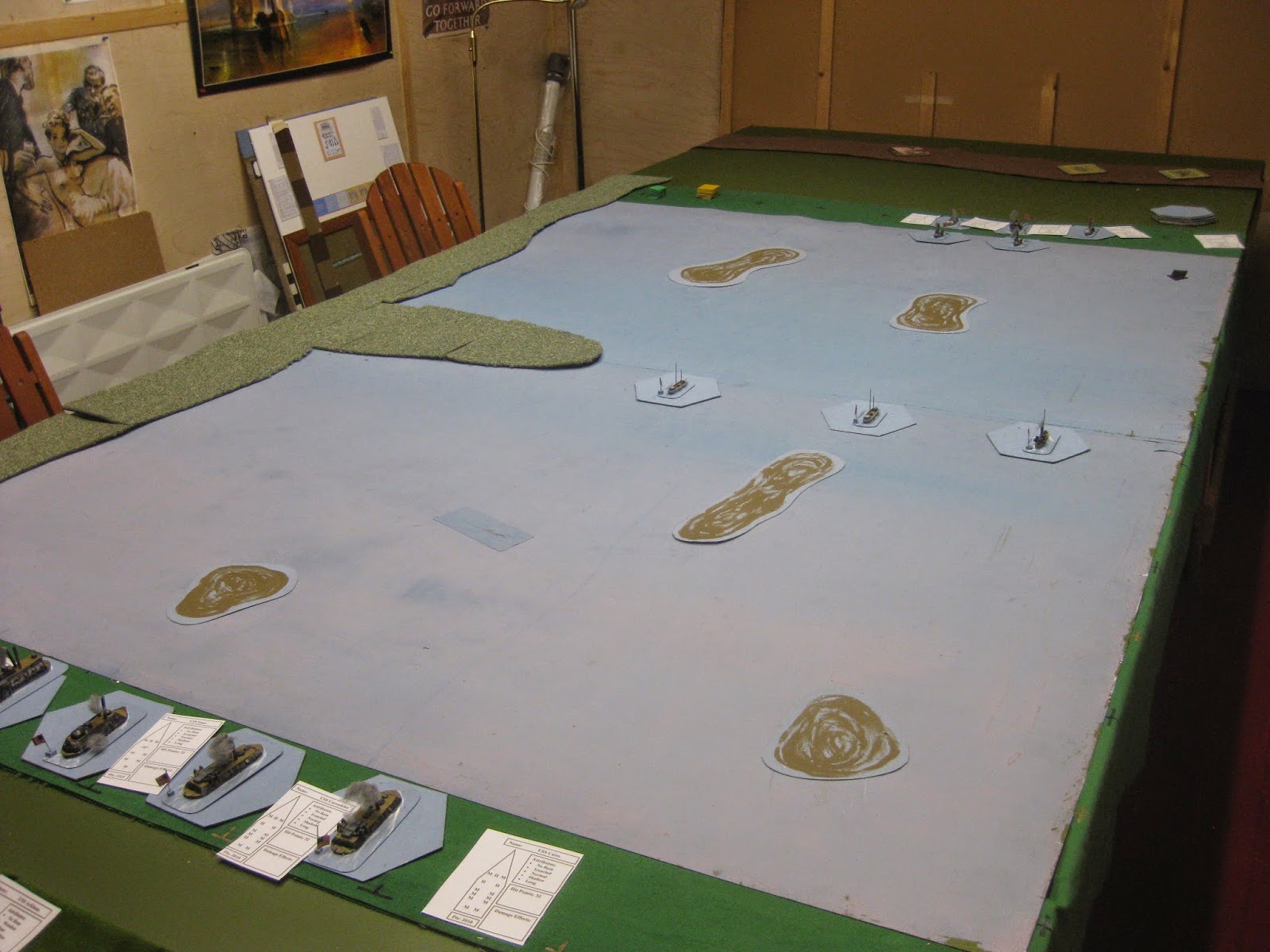 I put out a river bank with promontory and a few sandbanks. I briefed Will as the Rebel commander, because I thought we had other players coming. As stated above, however, circumstances meant there were just two of us, so I took the Yankees and tried to pretend I didn't know what the rebel briefing was. 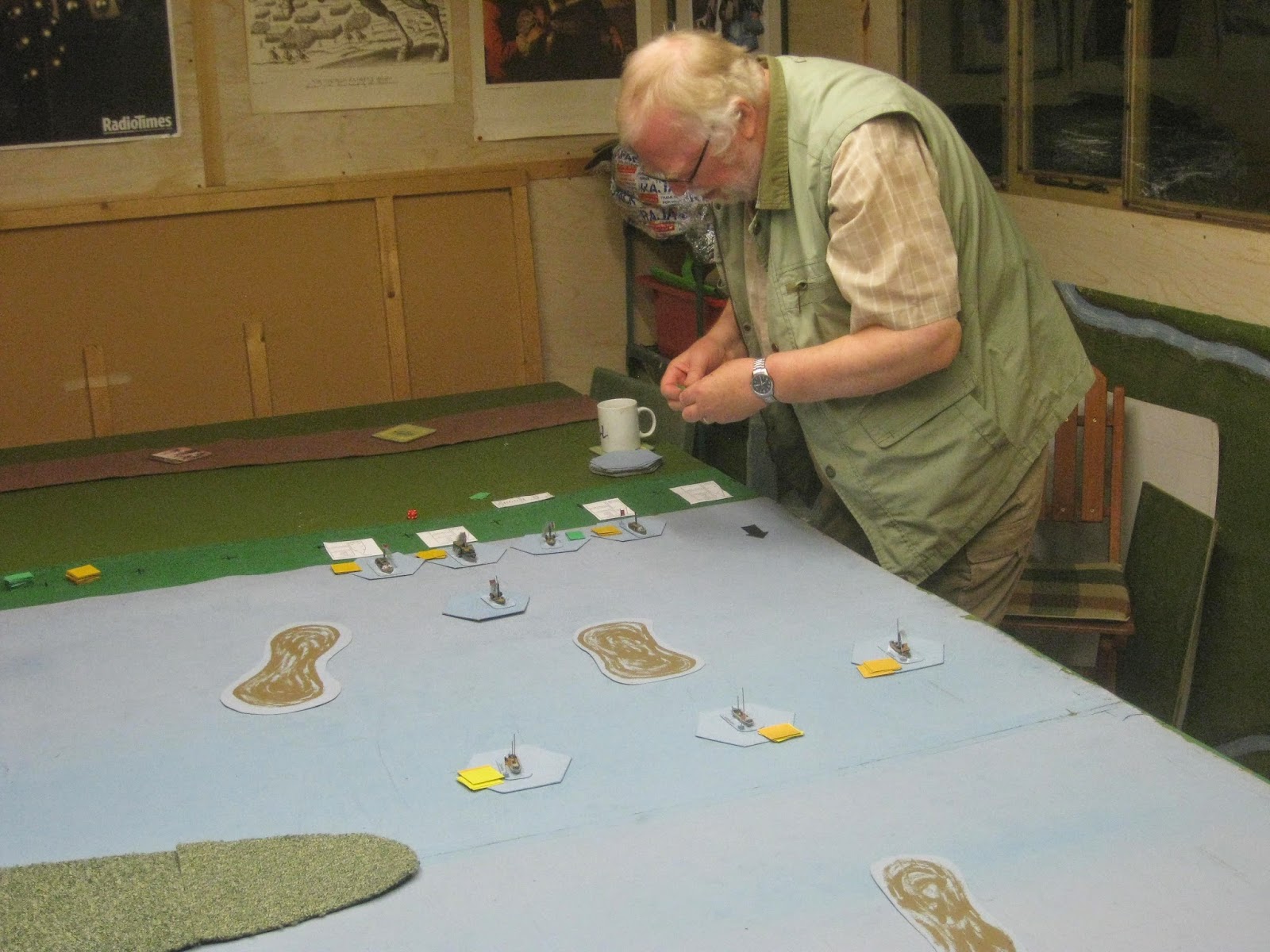 Will won the initiative roll and had me move first. An odd choice, I thought, as it enabled me to push my picket boats further up the river. Will then brought on his pickets, and strangely gave then Gun Port cards.

For those of you who don't know Hammerin' Iron ships have a set of order cards. There are two types. Under the new version of the rules, - of which more later - these are known as "Smoke" and "Gun Port". The Smoke cards in my set are square and yellow, the Gun Port cards oblong and green.

Smoke cards mostly enable you to move and sometimes fire. The Gun Port cards mostly enable you to fire and sometimes move. Some cards let you do both. At the start of the game it's usually best to take the Smoke cards, so you can move into action. When you get close you swap over to Gun Port cards and let your opponent have it.

I suppose in fairness to Will he has only played the new version that works on a hex grid on a table 5' x 3' where the navies start off quite close together. I was playing on an 8' x 5' table, using what is known as the "free hex" method, where ships move on their own hex, not on a grid. I like a fair amount of clear water so the ram ships can get properly lined up. 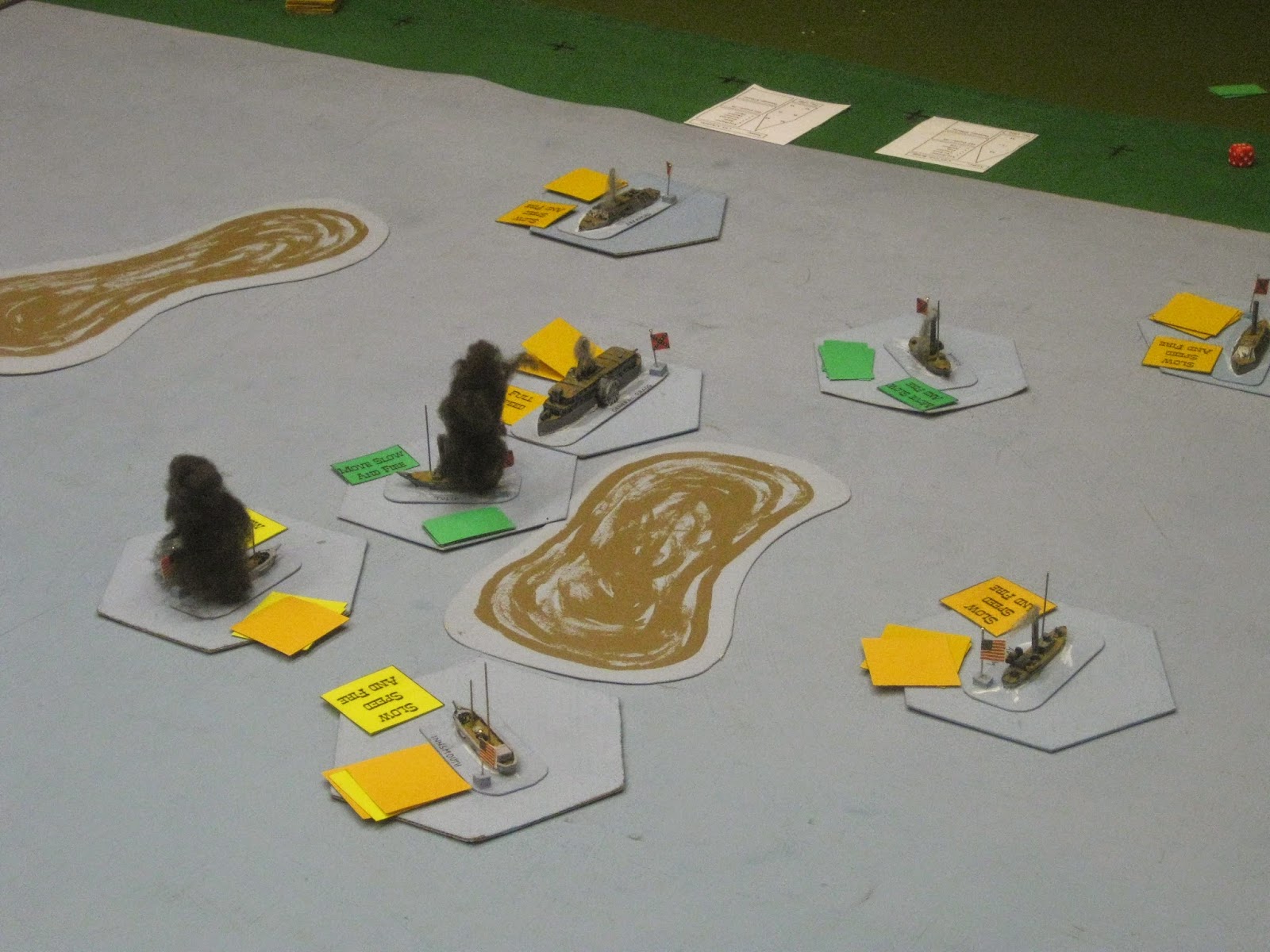 Will rolled to bring his second wave of ships on, and miraculously they all turned up. Two picket boats exchanged shots, and both caught fire. Luckily we were able to put the fires out before too much damage was caused. 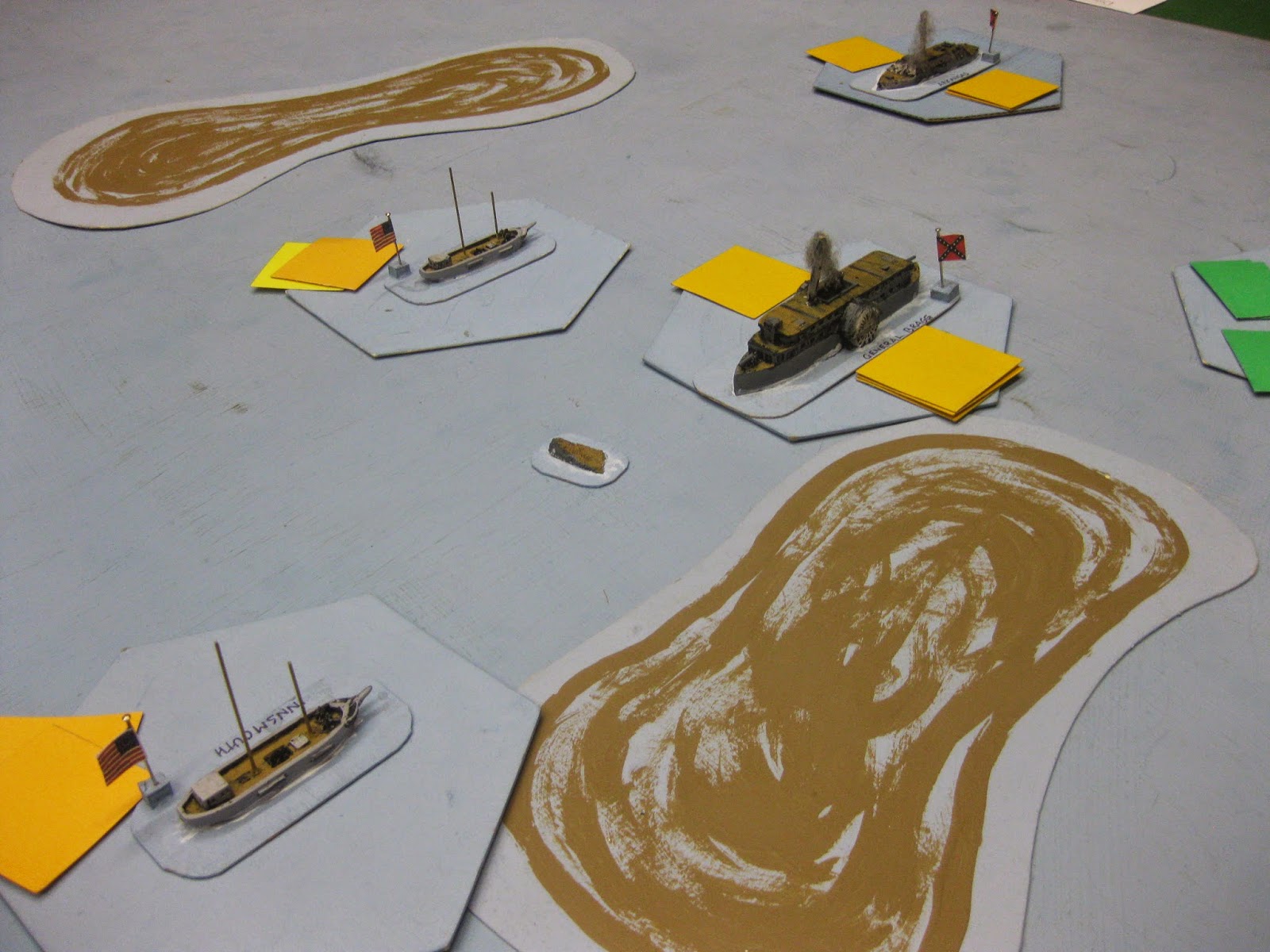 However, a second round of firing did for Will's ship. The Fuschia, I think. 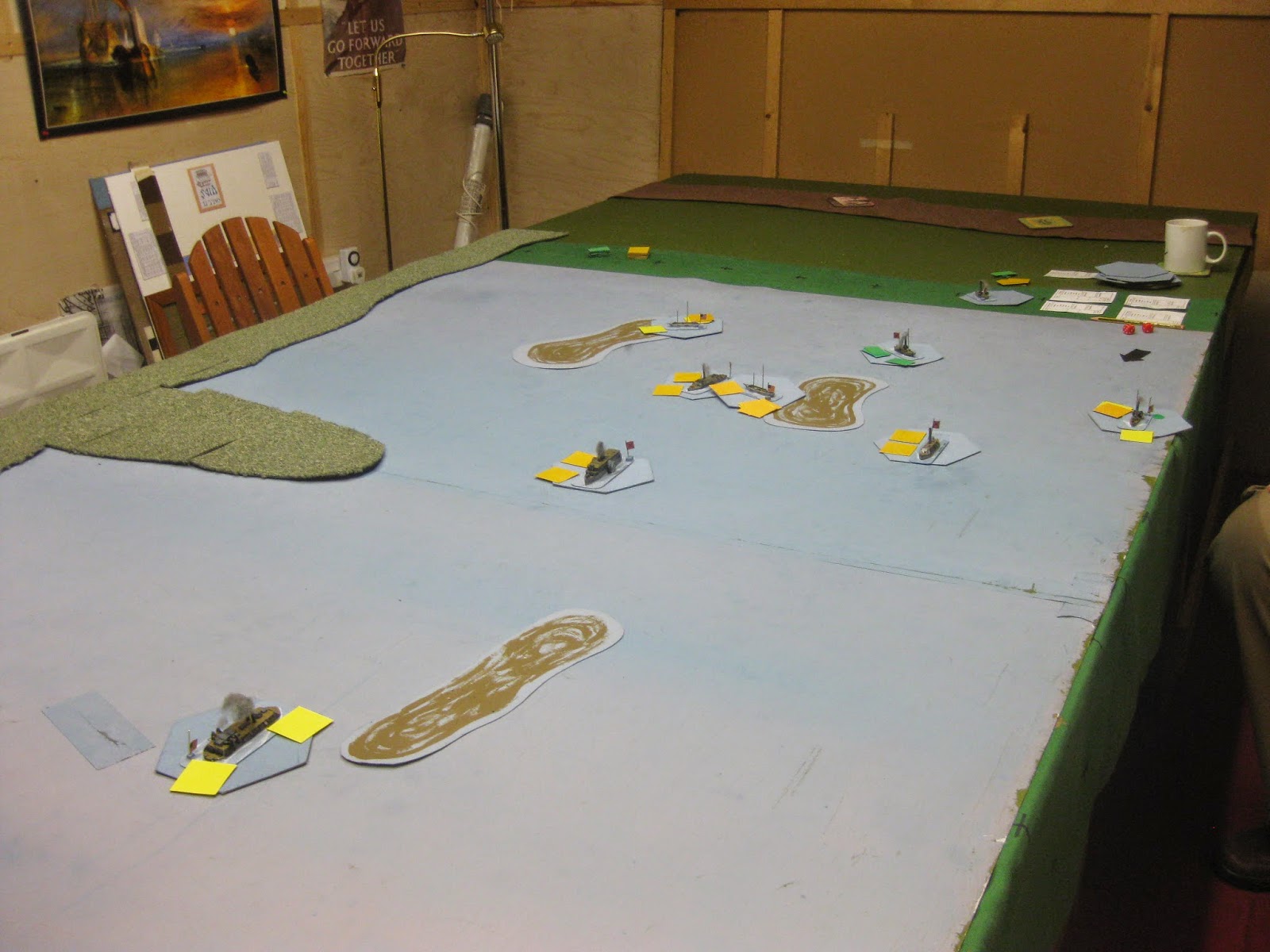 I had by this point succeeded in getting my first reserve on, the Carondelet. This isn't that fast, not is it a rammer, but it is stuffed full of guns. 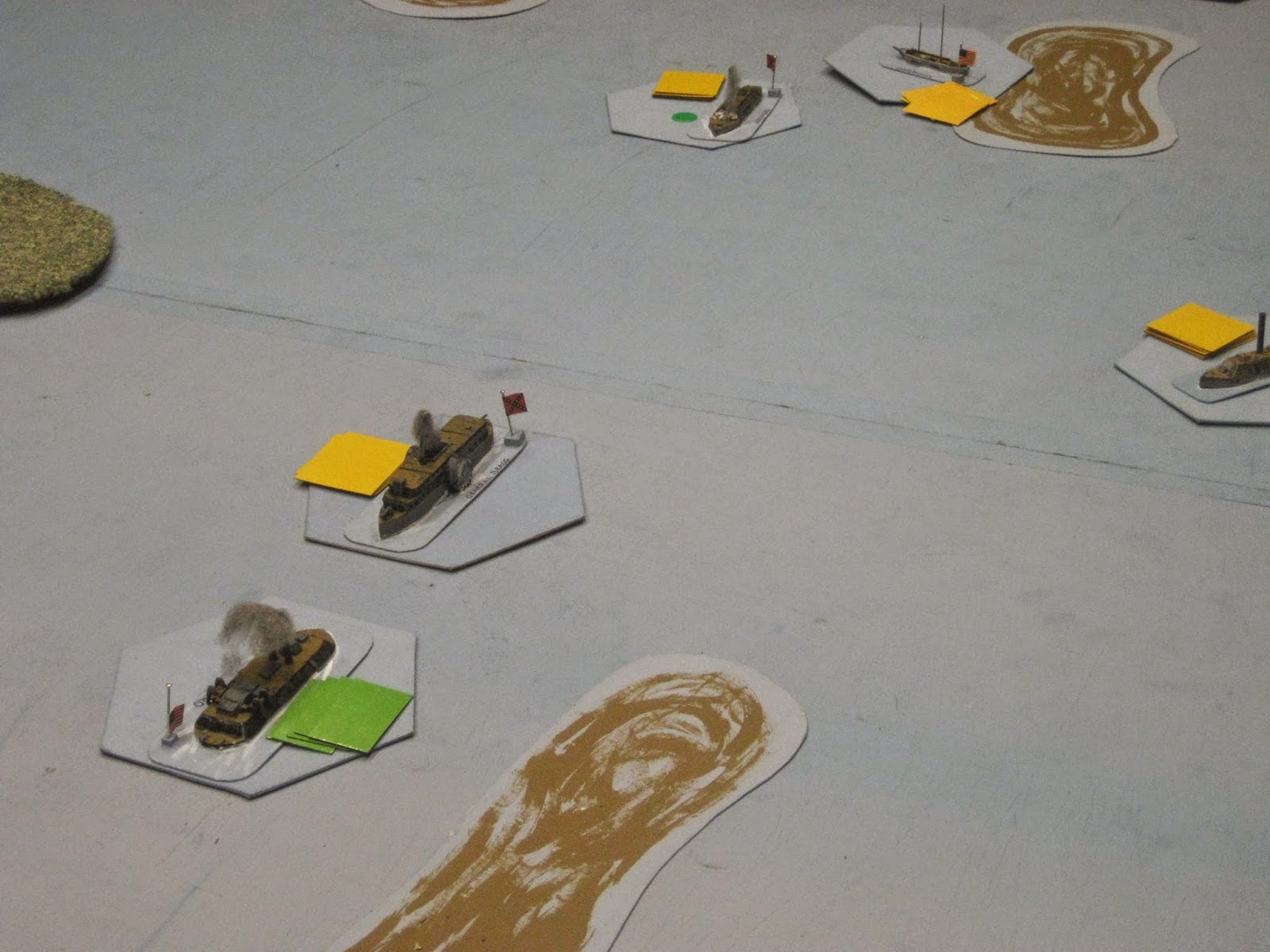 The General Bragg had broken through my cordon, and ignoring its escorts just steamed at full speed down the river towards me. 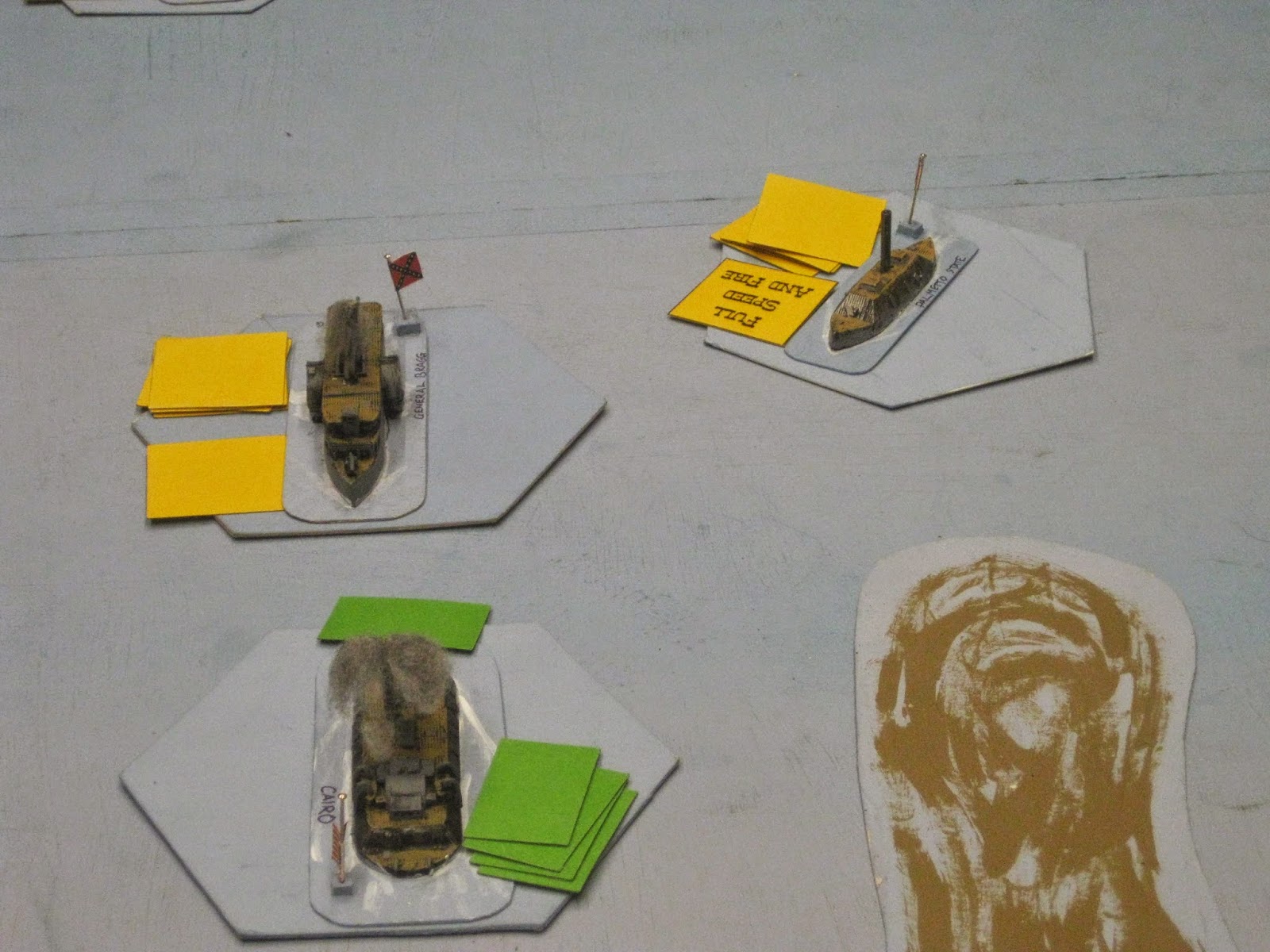 I slowed down and started to blaze away with my forward cannons. Will brought up the Palmetto State as fast as he could to help out. His other ships were tied up by my pickets. 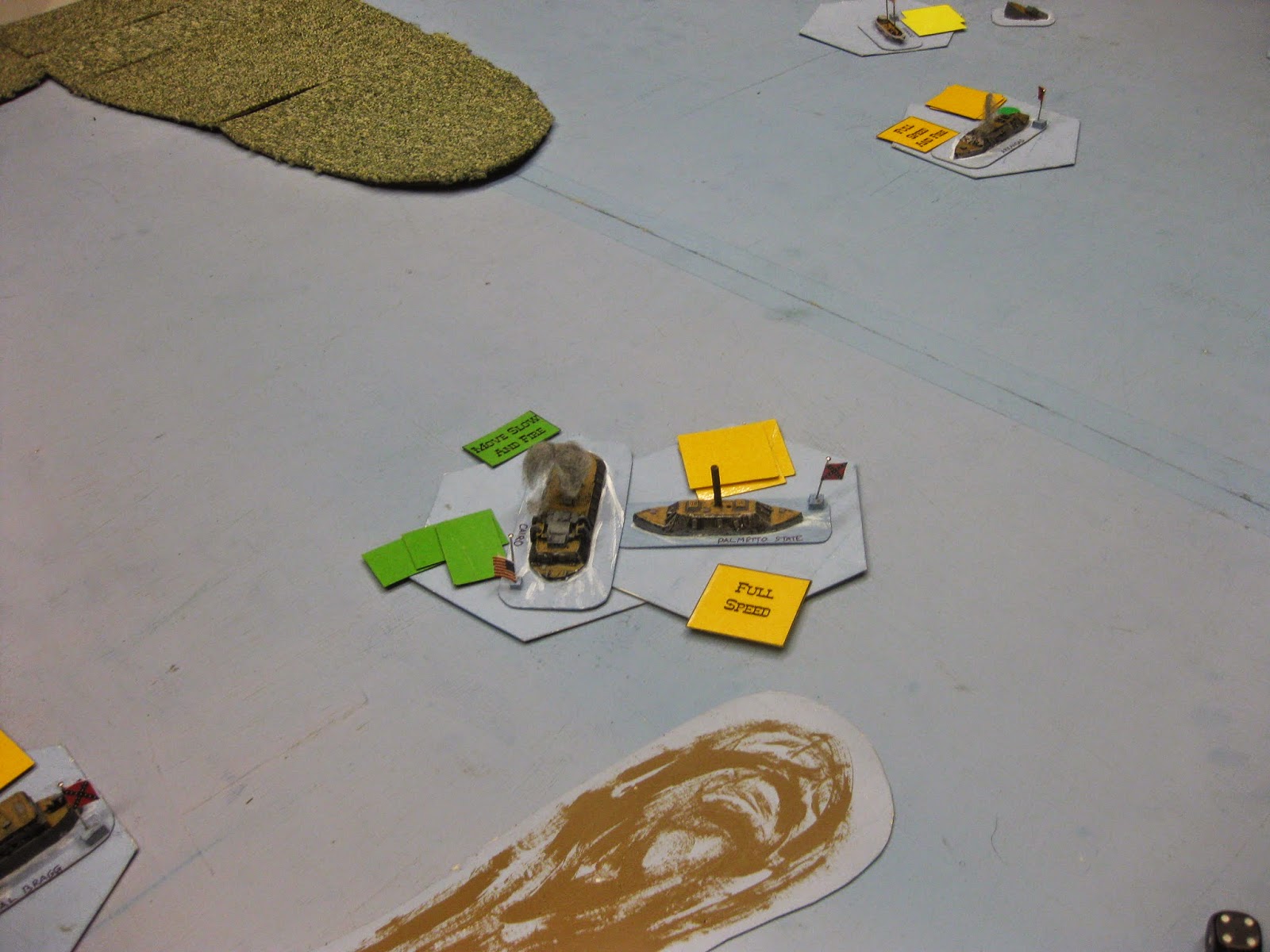 I angled the Carondelet to get a broadside in, but the General Bragg was able to steam past me, and the Palmetto State rammed me amid ships. 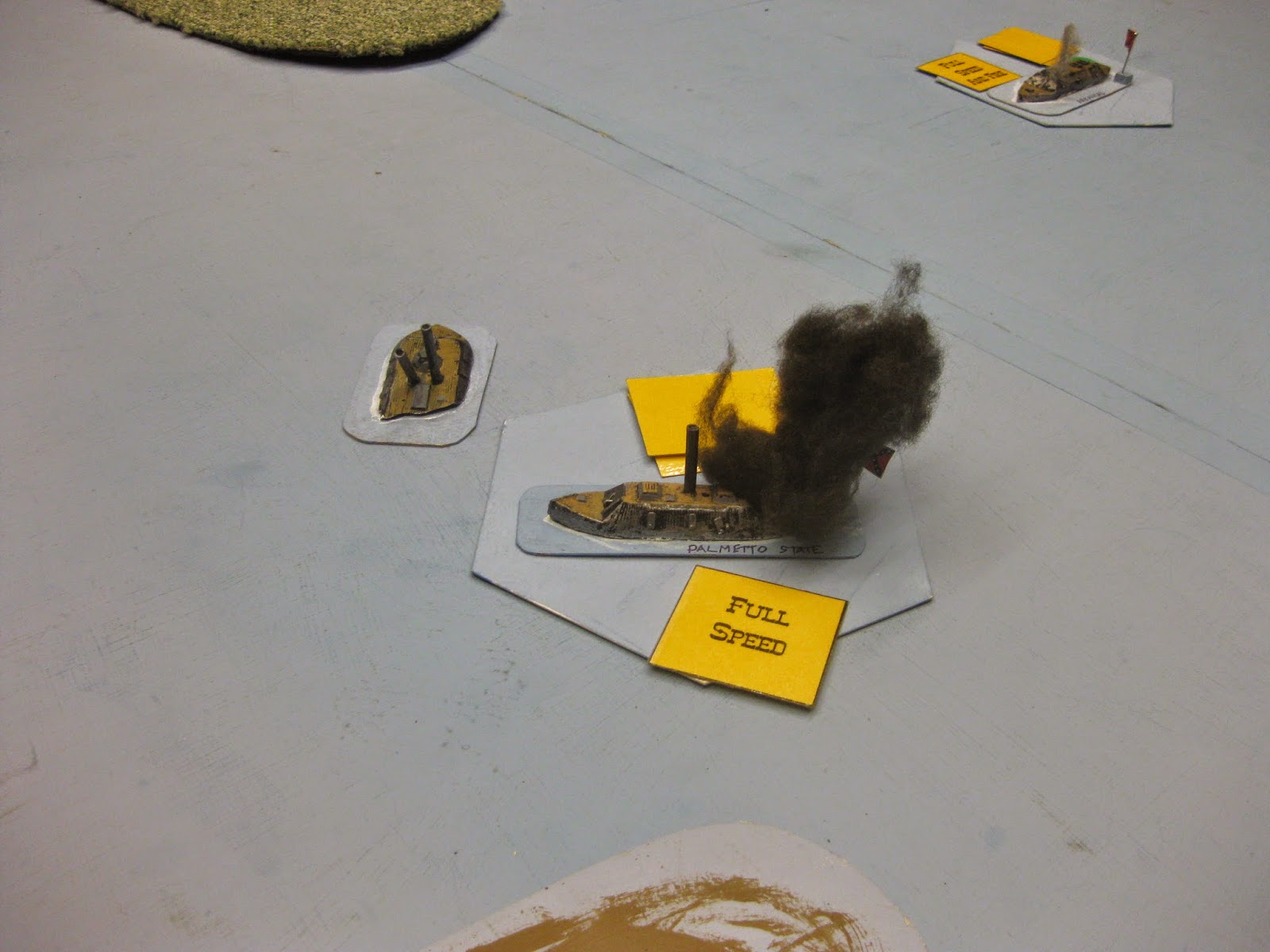 I gave the Palmetto State a broadside as she came in, but she hit me cleanly and sunk my ship outright. The impact did cause a fire to breakout though. 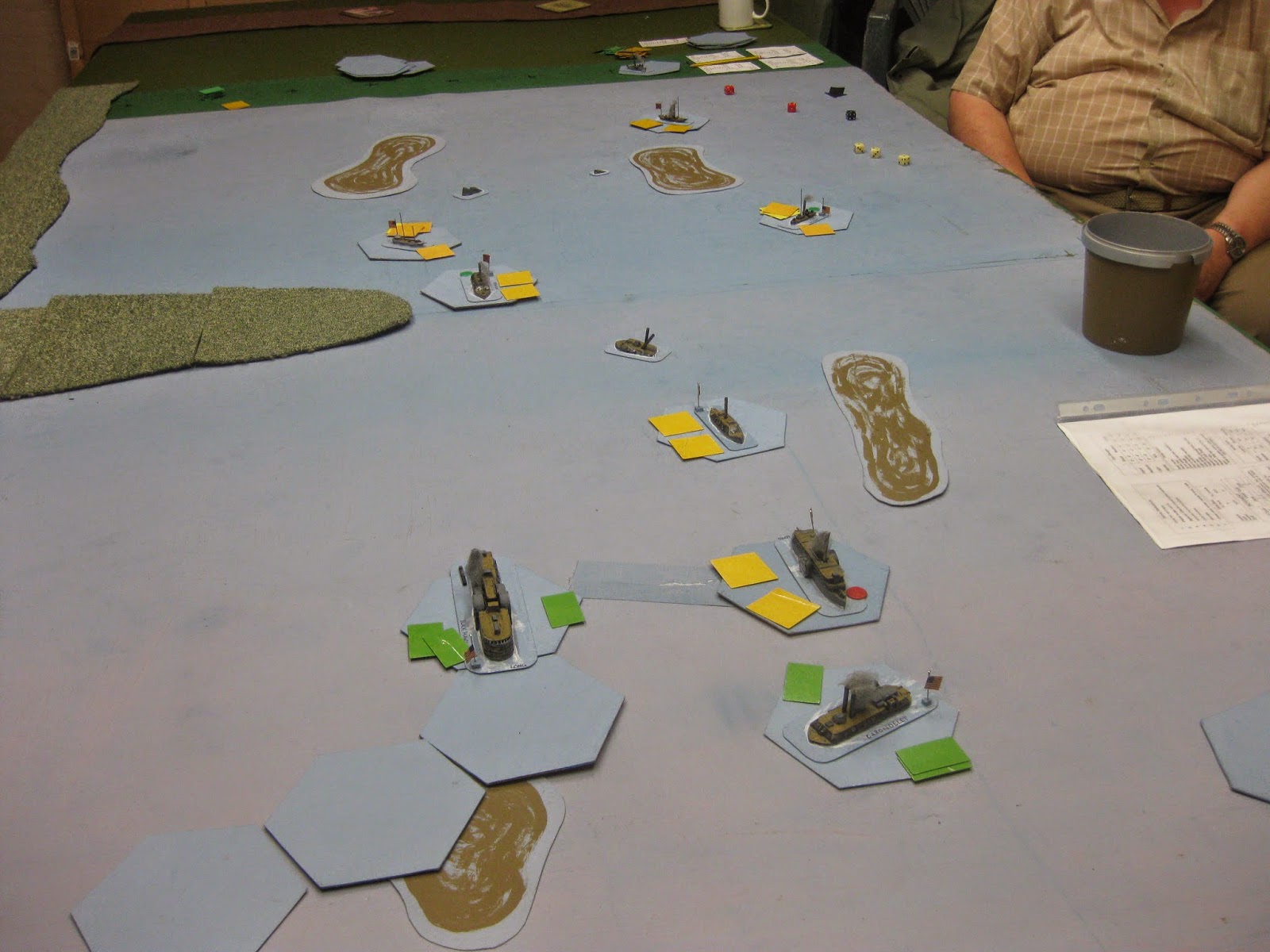 However, I had delayed Will enough to get the Blackhawk and the Cairo on. This meant I could pummel the General Bragg with lots of guns. A critical hit blew out her engine room and stopped her dead in the water. The Palmetto State had put out her fire, and limped up towards the General Bragg with the intention of taking off the VIP.

Further up stream the Miskatonic squadron had done excellent work delaying the other Rebel boats and causing lots of damage. 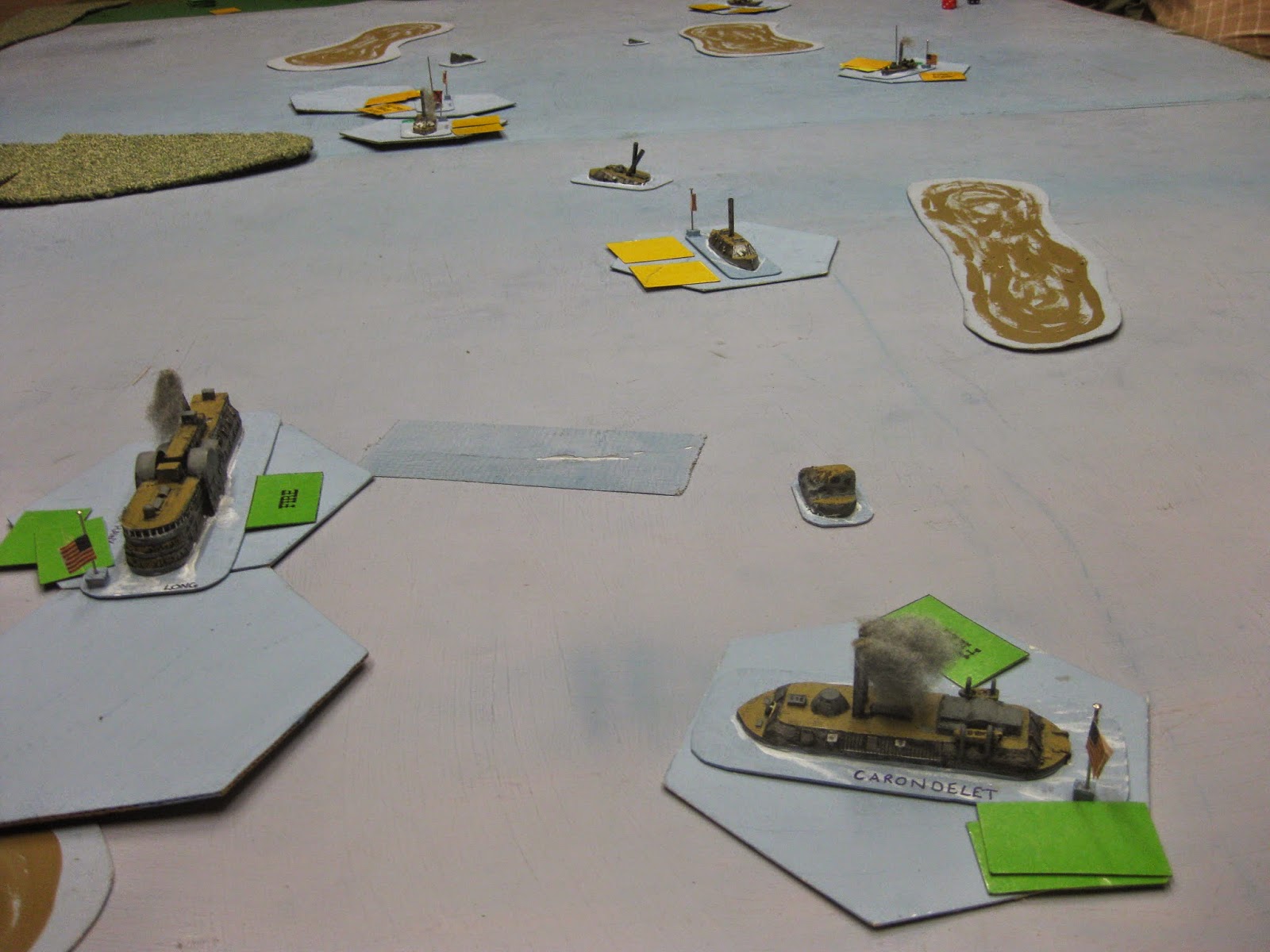 The combined fire of my two ships was finally too much and the General Bragg subsided beneath the river waters, complete with VIP. Game Over.

Will claims to have thoroughly enjoyed himself. As I said above we were playing the old Hammerin' Iron II version, and he has only played the 2011 re-boot.

The mechanisms between the two sets are very similar. The 2011 version also contains the "free hex" rules in addition to the hex board, and the firing/movement card system is unchanged. It has a more detailed pre-game sequence and a bit more chrome. I think all of that is unnecessary if you're okay to put the ships on the table and knock out your own quick scenario. Many games I've run of this have been a free for all, with multiple players in two teams, each with their own ship.

My version of HI2 is a bit battered, and it isn't the most professional production ever. It's got typos and the occasional contradiction and the ship points aren't always right. However it is packed with exuberance and sheer fun. It has clearly been produced by someone who loves what he is doing and just wants to share it with you. It's naive in many ways, but it is brilliant. It is imaginative, original and simple.

So, another old favourite dusted off and proven to stand the test of time.

If you've never tried this period of type of wargaming I urge you to buy a set and pick up a few ships. It's just great. And distinctly affordable