Last weekend was the Derby World Championship thingy, which is now no longer held in Derby, but at Castle Donington race track.

This year, for a variety of reasons, our local group attended as representatives of the Northampton Battlefields Society. As such our aims are threefold, I think:

1) Raising the profile of the battle
2) Drawing people's attention to the new insights that have been gained over recent years and
3) Campaigning to preserve the site.

To that end we had Phil Steele's excellent model/wargame board and a working approach to how we might wargame it, using a matrix game structure. It is always fun to introduce new people to matrix games. It's 10 years since the Society of Ancients published "De Matricae Bellae" and people are still finding it new (although kudos to the guys who were running the Borderers game behind us who were using a matrix argument system based on DMB, without realising the author was sitting behind them). 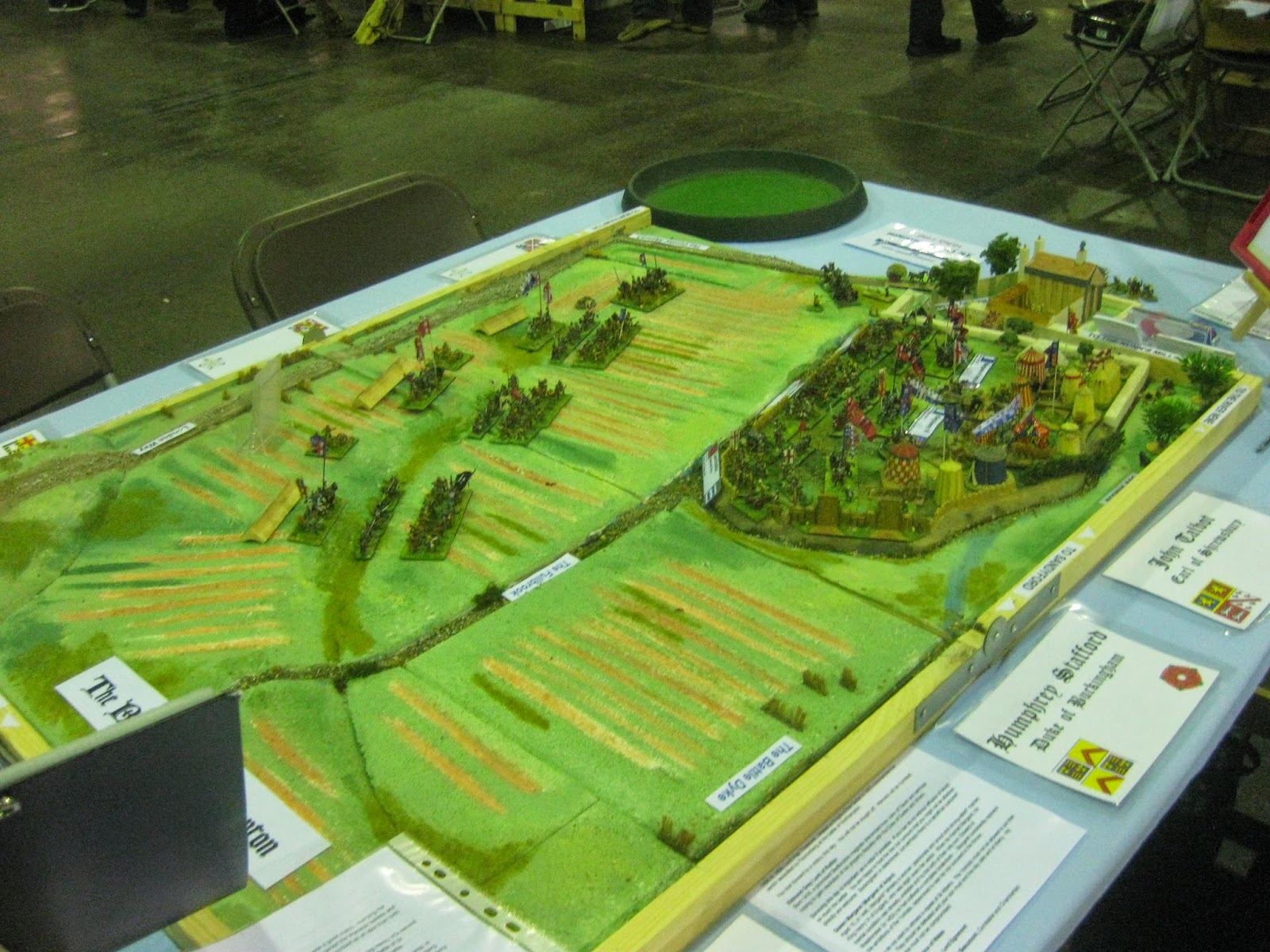 We had run a playtest/discussion session in Shedquartes last week and got the main structure of the game sorted. The participants take the Yorkists, and a "plumpire*" the Lancastrians. Following that playtest we had some tasks to finish things off. I did the player names cards, a rules summary and prepared the matrix card deck. 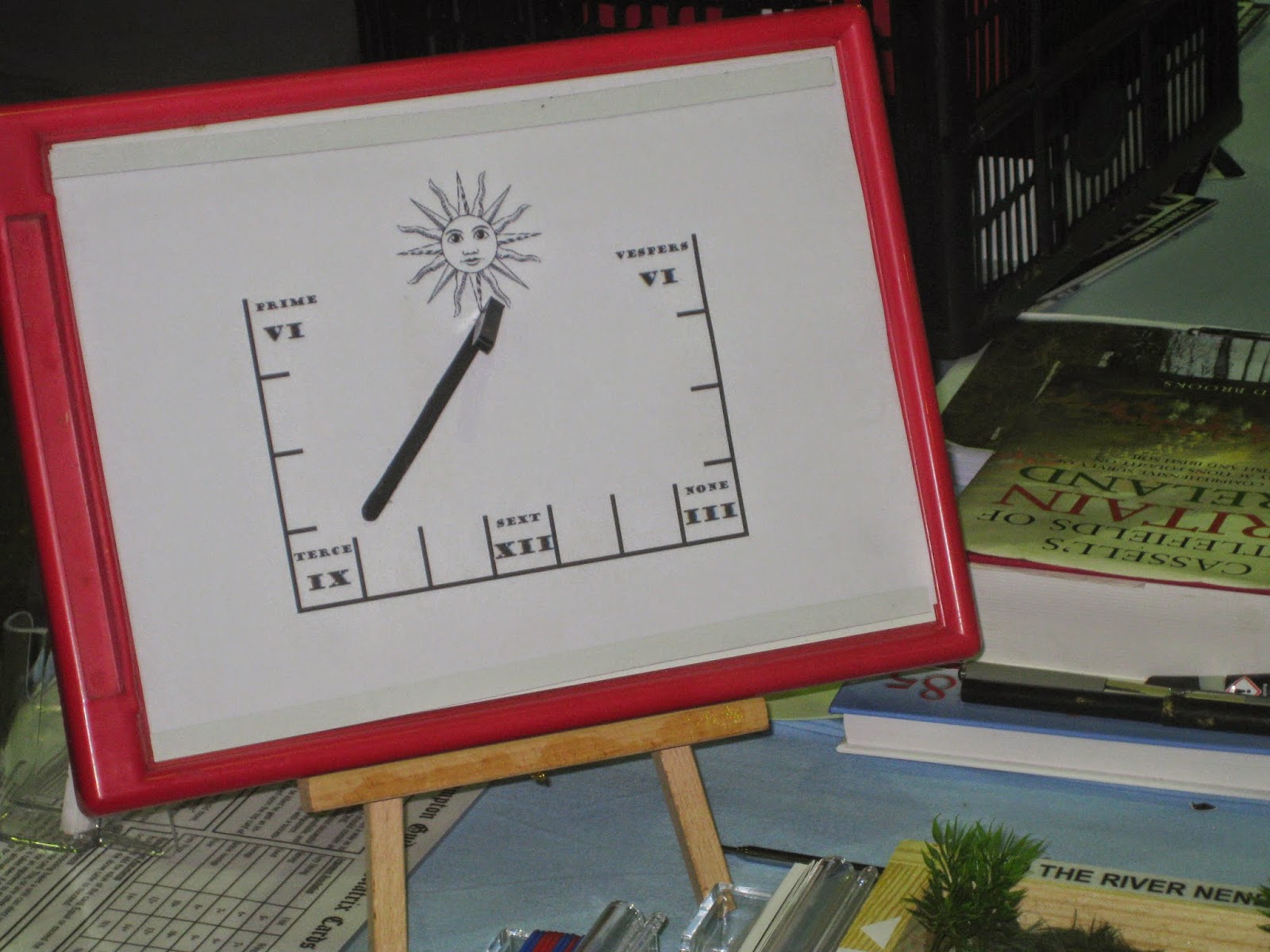 Phil did everything else, including this really neat game clock that looks like a sun dial. 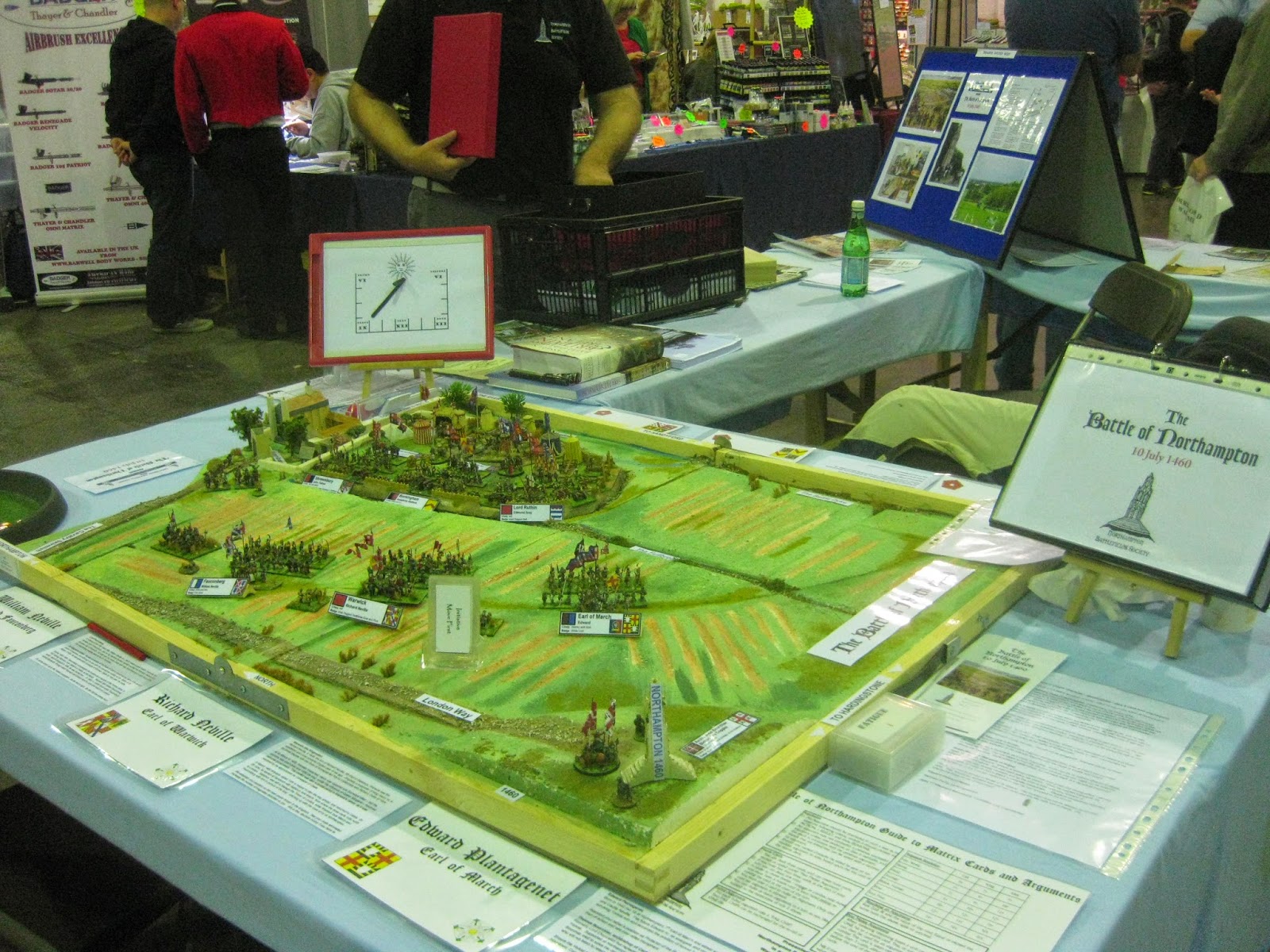 We had a compact little stand and a steady stream of people to talk to. We played the game a few times, refining the process as we went along. 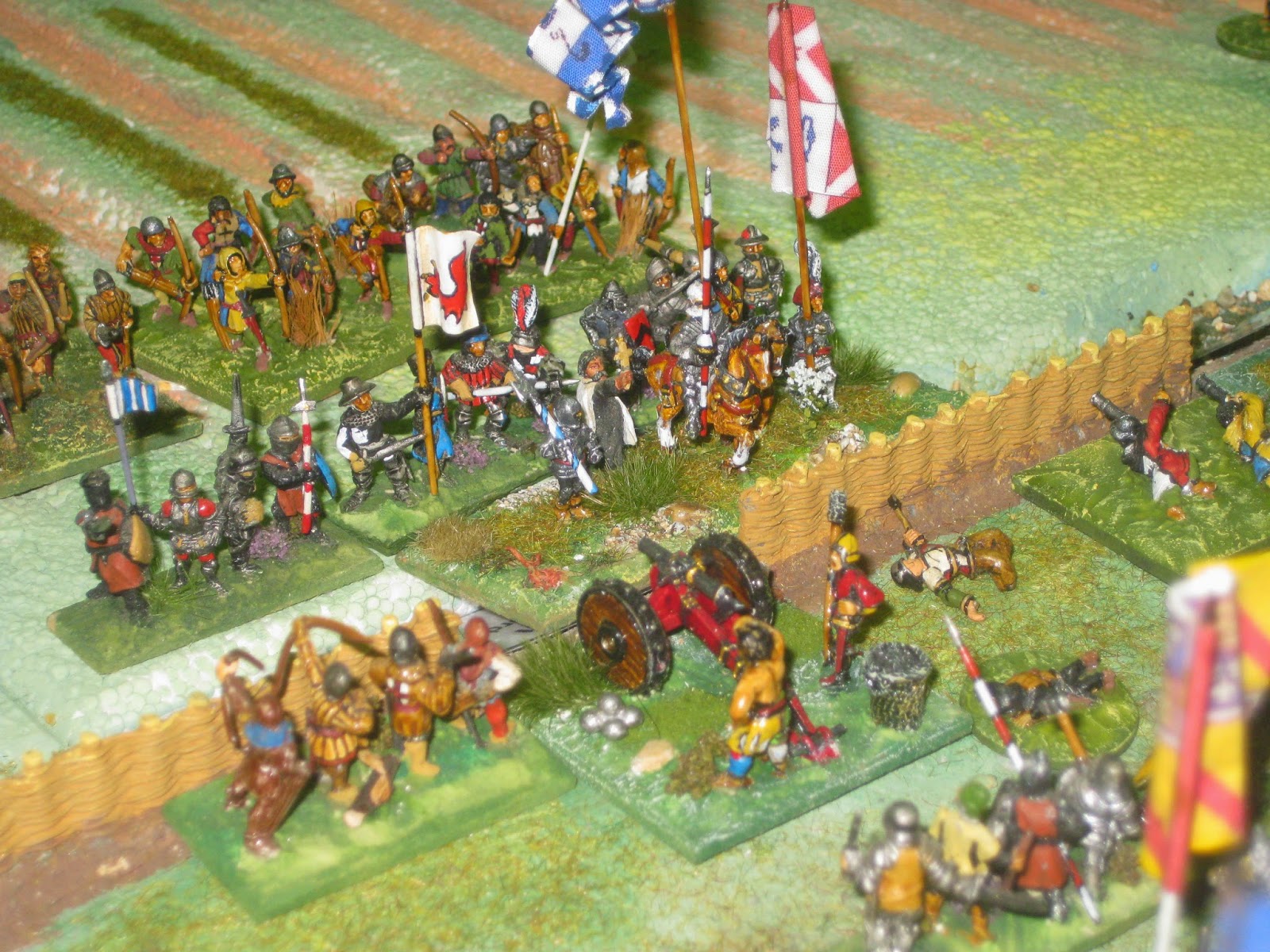 The last game was a real nail biter, with Fauconberg storming the entrenchments. 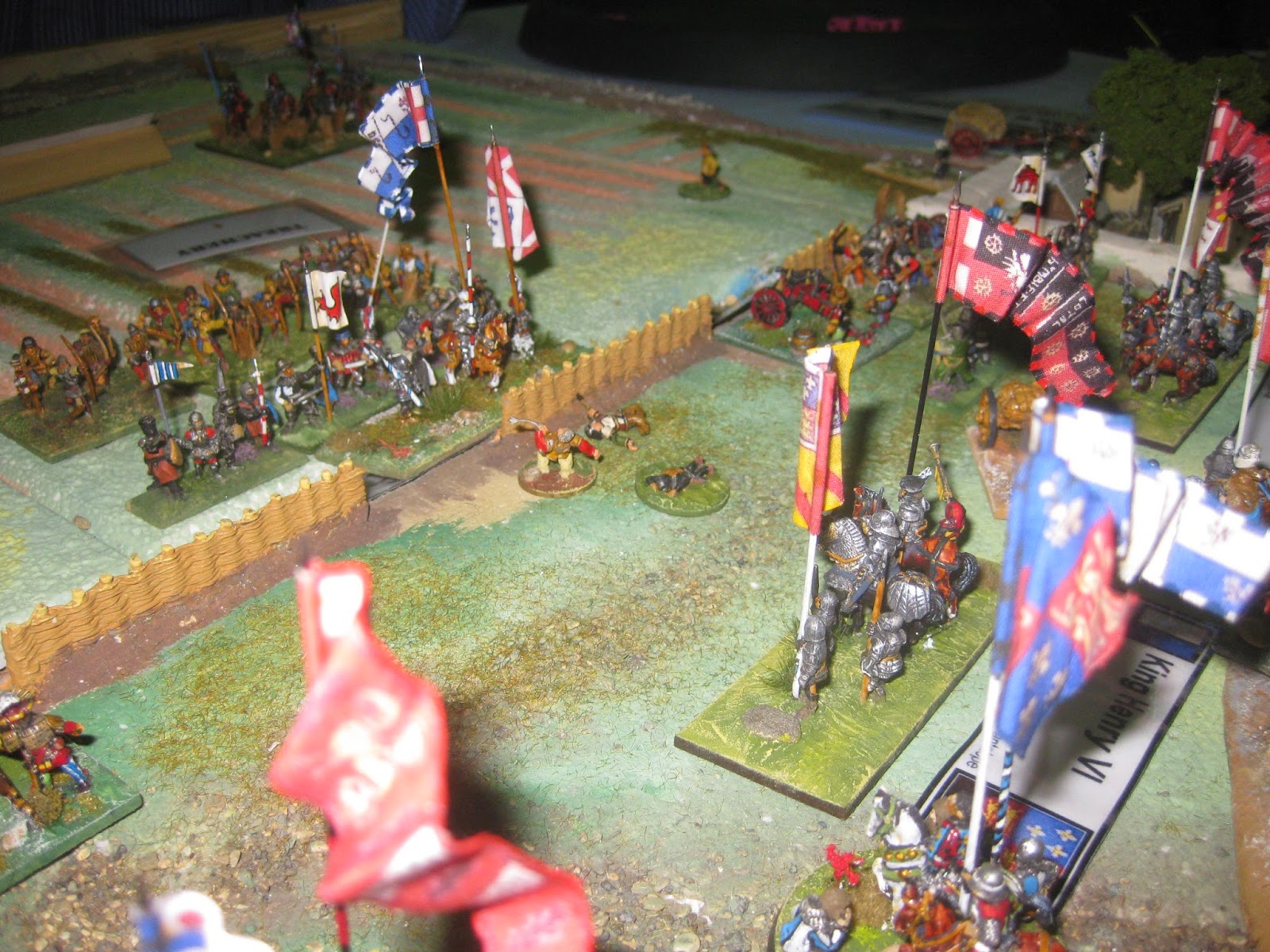 Buckingham's men died in droves, and the game ended with a man to man combat between the two leaders. Fauconberg was struck to the ground, but escaped death before overpowering Buckingham.

In the post game arguments it became clear that Fauconberg had enhanced his reputation considerably and his influence in the Yorkist faction at the expense of Warwick & the Earl of March. Buckingham became a martyr and rallying cry for the Lancastrians.

The important thing was we got to talk to a lot of people about the battlefield and the threat it is under. You can track what is going on and become and Associate Member through our Facebook page: Northampton Battlefield Society. Please do, - numbers are important in campaigns of this type and local residents need to understand that the battlefield is of national significance.

Elsewhere I picked up a few bits and pieces (and made the fatal mistake of not buying a book in the remainders box on my first pass through it at Caliver Books) and met up with some old friends. Pete Berry at Baccus as usual is full of interesting ideas and products. His WW1 BEF stuff looks just great. His artillery pieces put designers of larger stuff to shame. I'm sore tempted by these as I don't have any 1914 WW1 armies. However, unusually for me I have four projects queued up**, so this is unlikely for a while.

Pete is working on releasing his rules for iPads/tablets, and it looks like he may have cracked the way rules, armies and results can be linked and run painlessly using technology. This is a bit of a Holy Grail, but Pete's got as close to something I might consider using as anyone has. Alas, like Rupert Giles, I still like my books.

As for his figures....I find it amazing that people still claim they can't paint anything that small and then will paint lace, buttons, epaulettes and unit numbers on hat badges on a 28mm figure, all of which is actually smaller and more difficult to do than painting a 6mm figure.

Elsewhere was the usual mile stacks of Perry/Warlord/Victrix toy soldier boxes and so on. I usually pass these by and talk to the really interesting people in the hobby like Pete Berry and Ian Kay. Wonderful those 28mm figures may be, but it's all a bit soulless. I don't know how much of a living people make from re-selling this stuff, but I'd rather support those guys making their own figures anyway. I've been buying from Ian Kay for probably over 25 years, and he's always got something thought provoking. You really should go and buy his Taiping Chines (you can see them on his website listed under Indian Mutiny British. Don't ask).

Oh, and I bought some really small aircraft from Tumbling Dice to use as air attack markers for my SCW games.

The participation games had a few that looked interesting, but mostly we have reached a point where there's a standard that says a certain type of figure, painted a certain way with a certain style of terrain. Most games are running or selling commercial rules and I saw little of the classic one off participation game. In fairness I had little chance to sit down and join in, so this is a very peremptory assessment.

I like the Derby show, but I am still not a fan of the venue. It's big, empty, cold and when the track cars are there  (which is always) very, very noisy.

And the prize for optimist of the weekend? The chef who decided the best idea for lunch time was a large tray of vegetarian potato and leak crumble.

Now, I'm off to sort my purchases out.

* Plumpire = "Player-Umpire". It is not a reference to the girth of most wargamers.
** These are 1) Finishing the Assyrians/Medes, 2) Taiping Chinese, 3) El Cid/Almoravid/Andalusians, 4) The Peru/Chile War of 1879 - 1884. To understand why this is so wrong, go to: How-to-finish-wargames-project