As one of the players who really wanted to play Hammerin' Iron was missing last week, I thought we'd have another go this week. Then he was taken ill, but I thought, let's do it anyway. After all, I'd done the work.

The most well known naval battle of the ACW is Hampton Roads. Every wargamer usually knows it's where the first clash of Ironclads took place - the CSS Virginia/Merrimack v the USS Monitor. What the wargamer with only a casual interest doesn't know is that the day before the clash of the Ironclads there was a more extensive engagement where the CSS Virginia had a go at several large ocean going ships, whilst accompanied by some smaller vessels. The Virginia gave the Union a right scare, inflicting the first major defeat on the USN.*

I did some minimal research (Wikipedia and that rather good civilwar.org website) and established that I had at least one of the ships present. That would be the Virginia, 'cos, like, EVERYONE who does this sort of thing buys the Virginia and the Monitor. Obvs.

The rest of the ships are all wooden, and are a mixture of side wheelers, sloops of war and frigates. I went through my collection to get the closest matches possible and massaged up some ship stats. I had to guess on a few as most aren't in the HI rule books. I also tweaked the stats to give some ships more of a chance.

The area of the battle is a bit more complex than what I laid out, but then my wargames table doesn't have a bend in the middle and I didn't want to cramp the player's ability to manoeuvre too much. 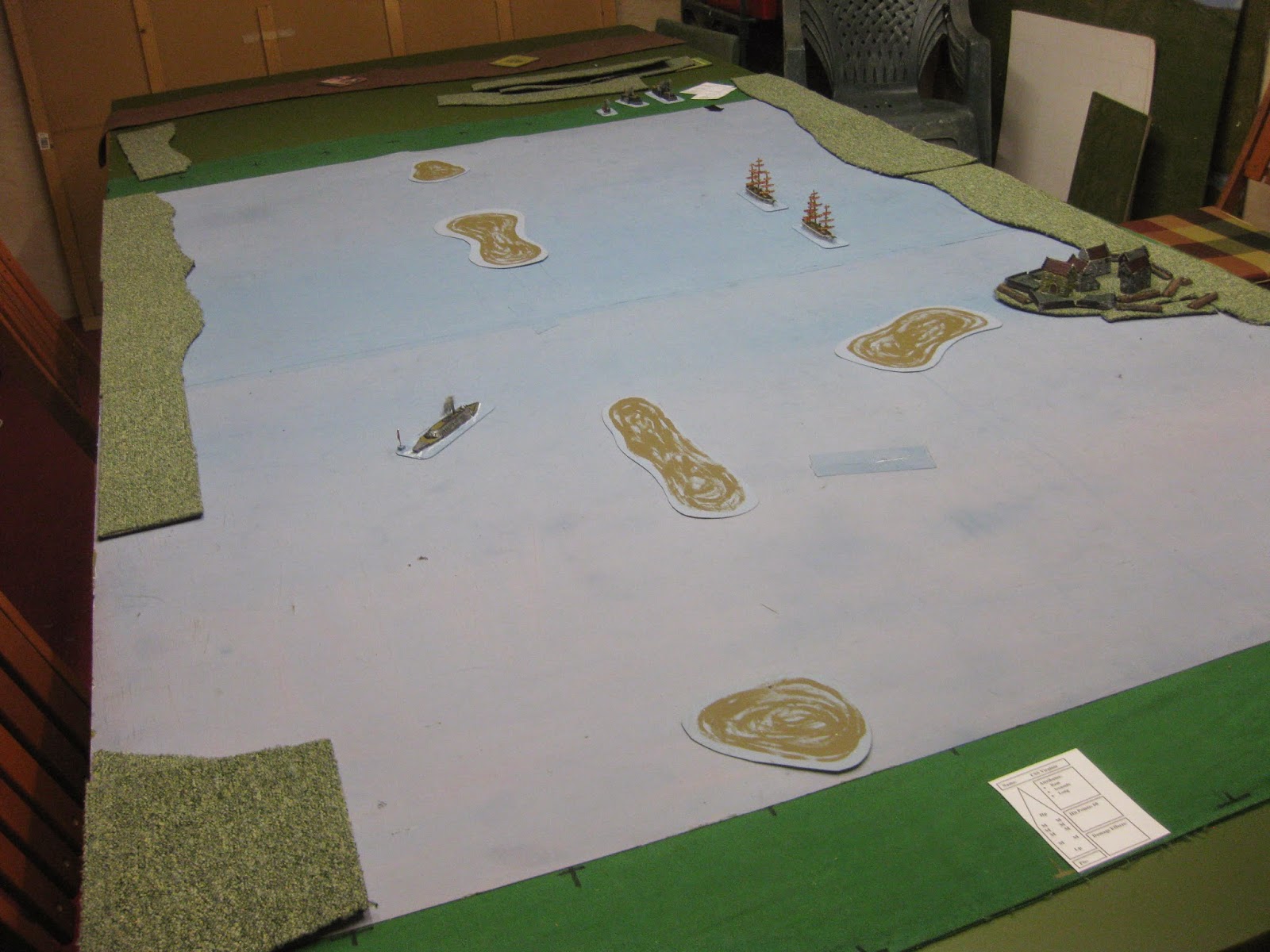 This is the set up. I put the Virginia part way onto the table, with the Congress and the Cumberland anchored. The Confederate "James River Fleet" will enter from the top of the board, and the Union reinforcements will come on from the bottom right. The Rebel aims are to sink as many Yankee ships as possible, unite the fleet and then retire up the channel on the left to refit. The Yankees want to stop them and sink everything possible.

Will took the Rebs,  I took the Yankees until the Dormouse arrived to help me out. 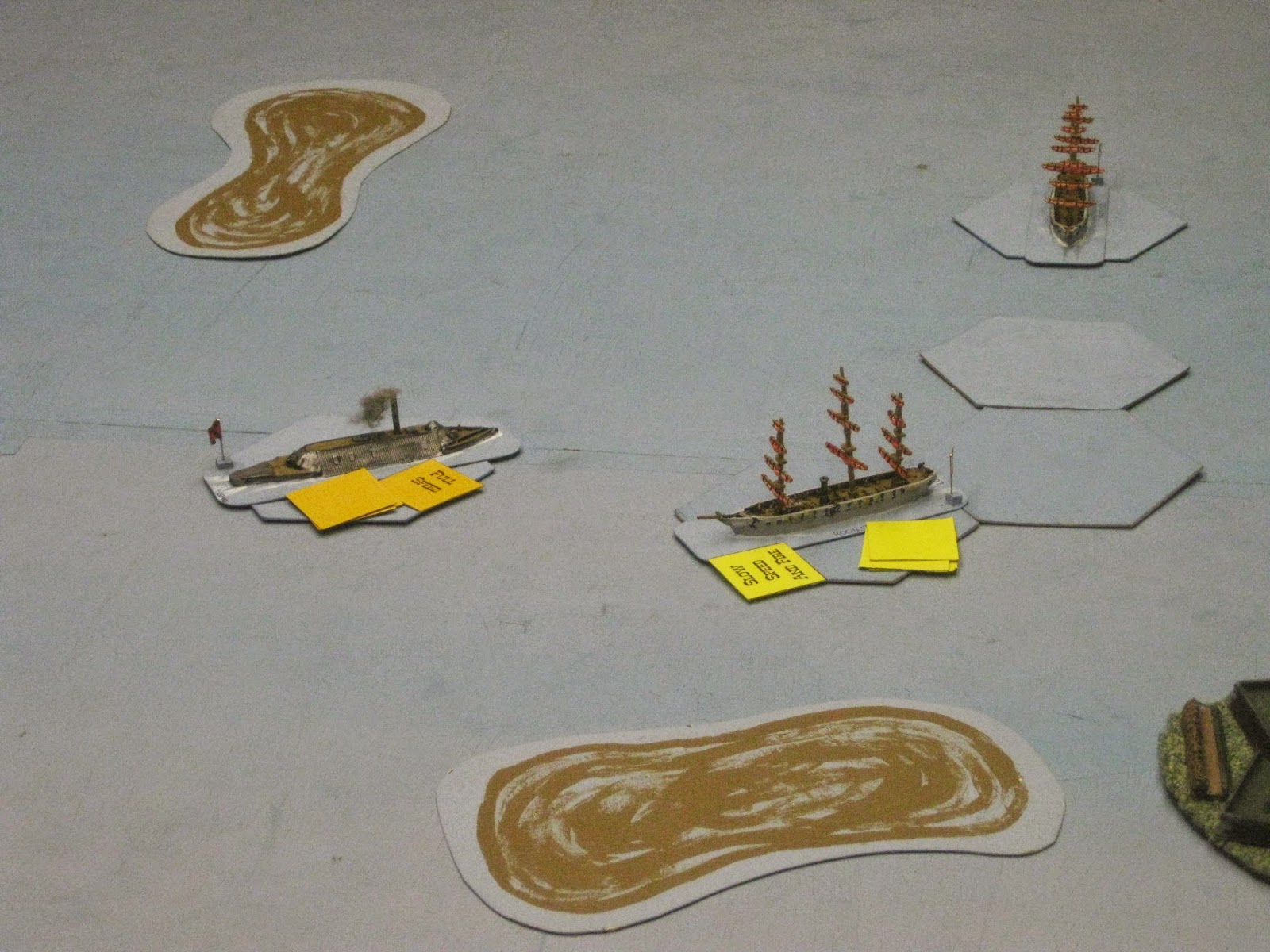 The opening moves. The Virginia steams in at full speed. The Congress (aka the Rochester) has seen her and raised steam. The Cumberland is being a bit tardy. 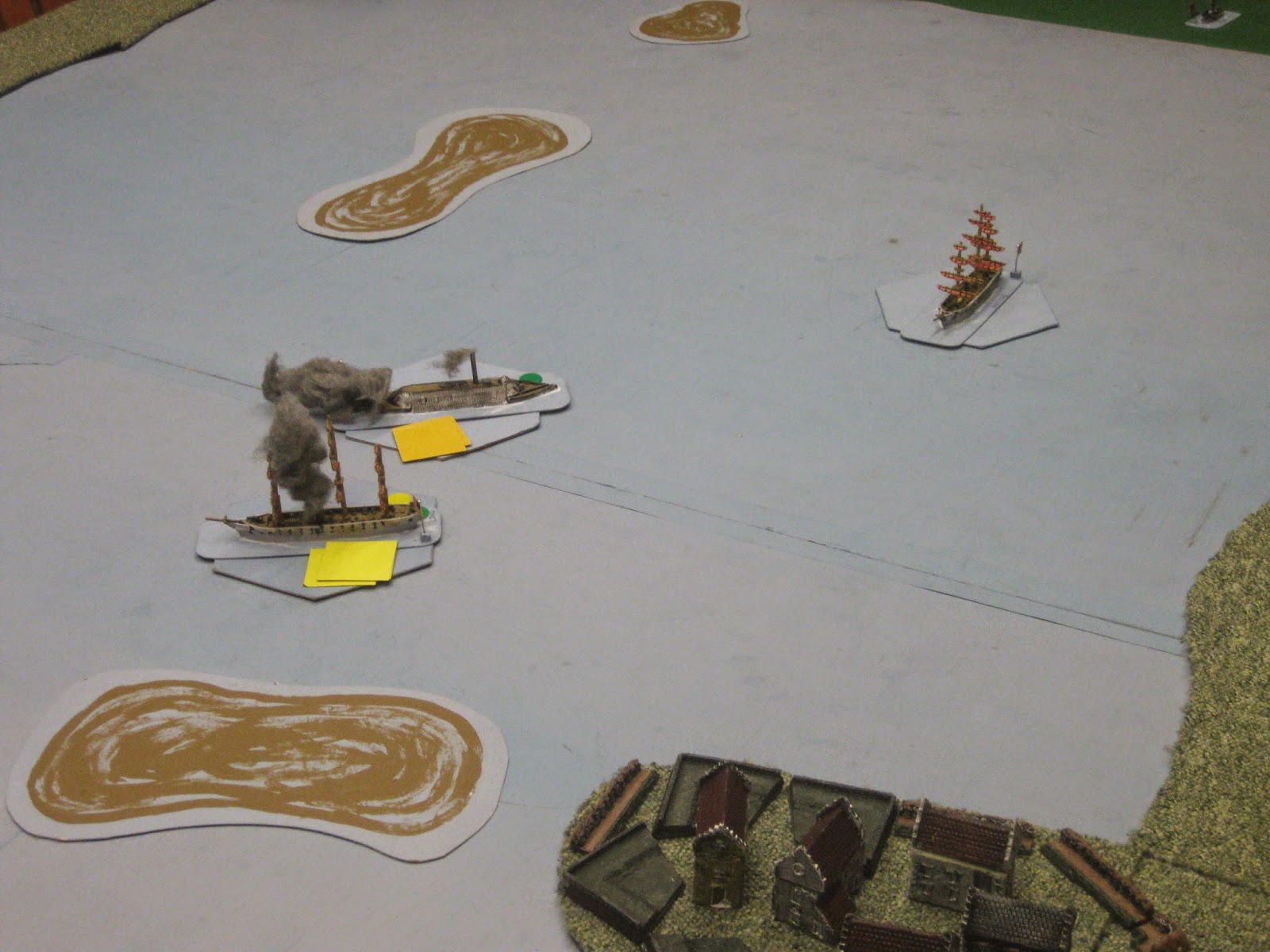 The initial exchange of fire causes damage on both sides, and fires break out. This is an interesting fight. The Congress has a seriously heavy broadside, but no armour, the Virginia the opposite. In this exchange due to some demon dice rolling the Virginia comes off worse. 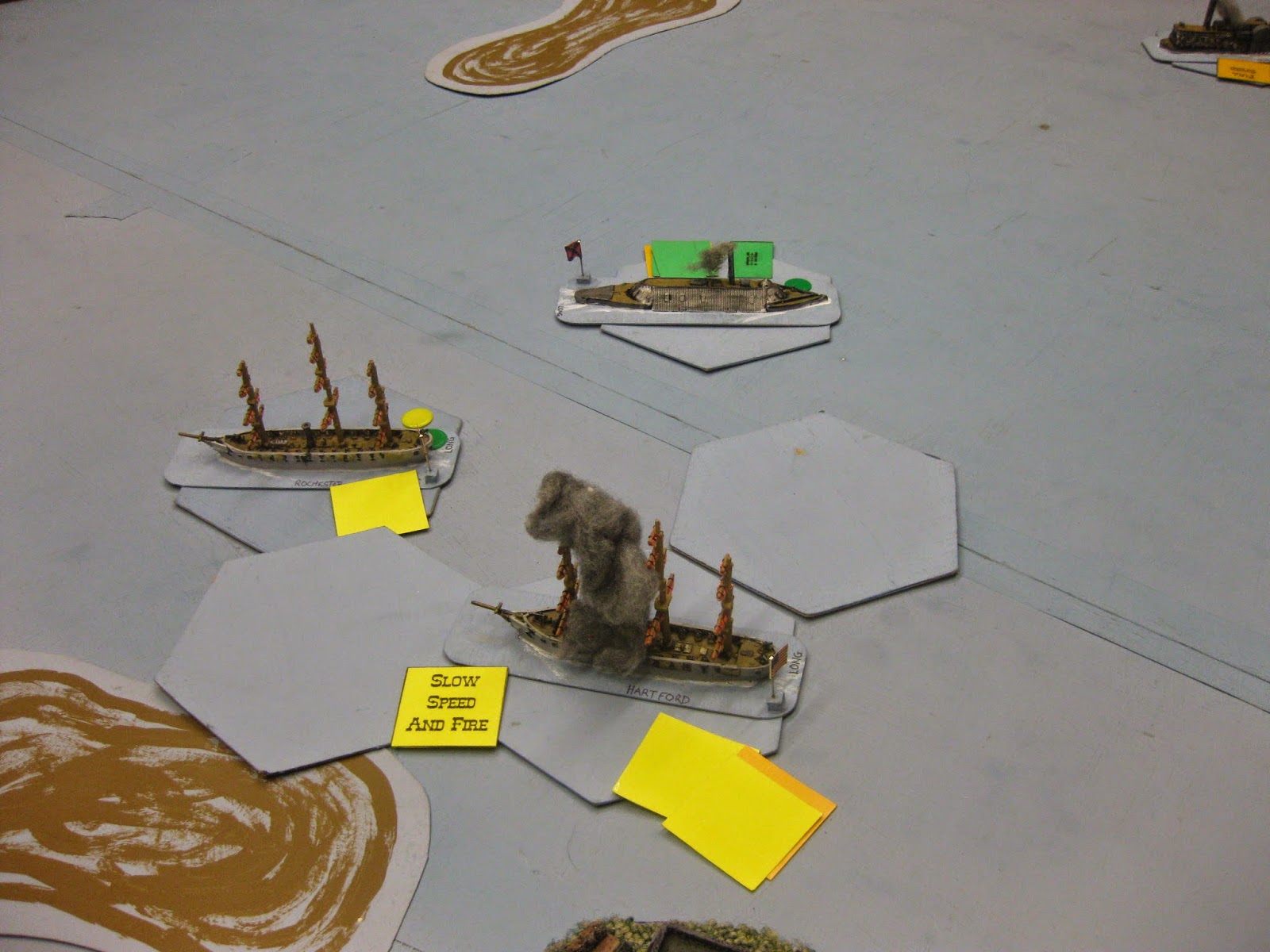 The Cumberland gets under way and joins the action. The Virginia and the Congress have managed to immobilise each other with hits to the pilot cabin and the smoke stacks. The Cumberland has a fire break out, the other two ships having got theirs under control. 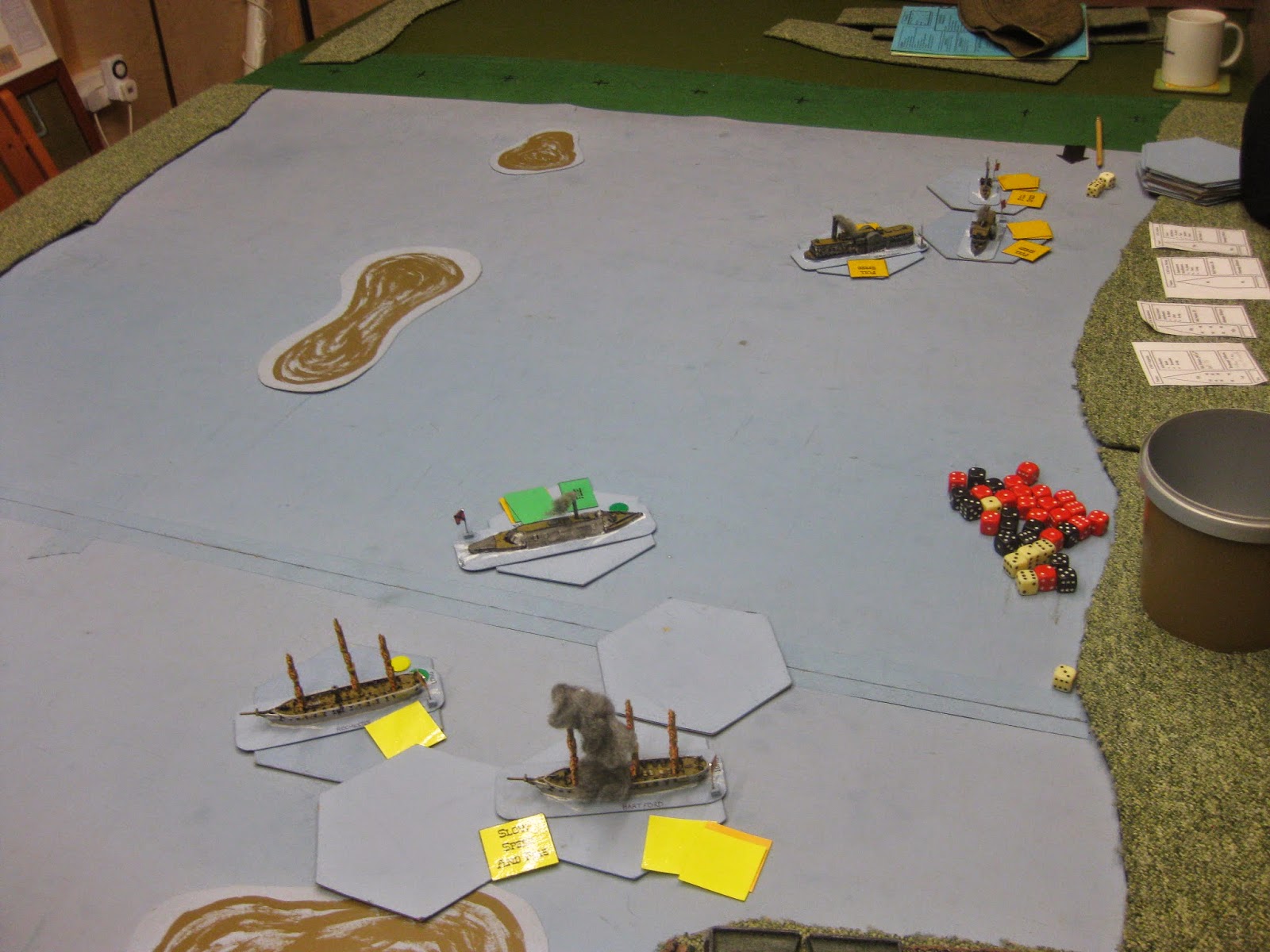 In the distance the James River fleet enters the table. 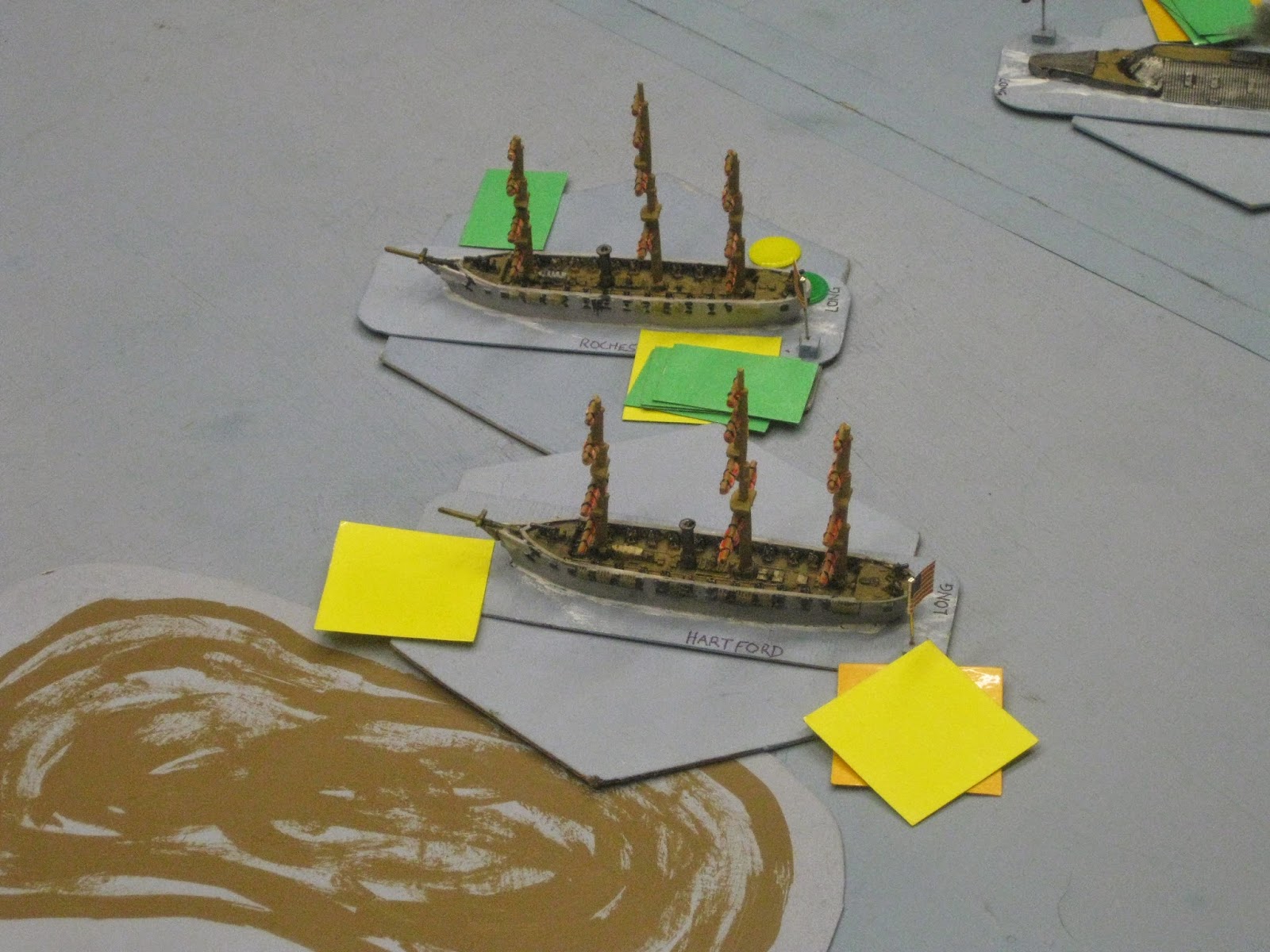 Forced to cross a sandbank the Cumberland runs aground. 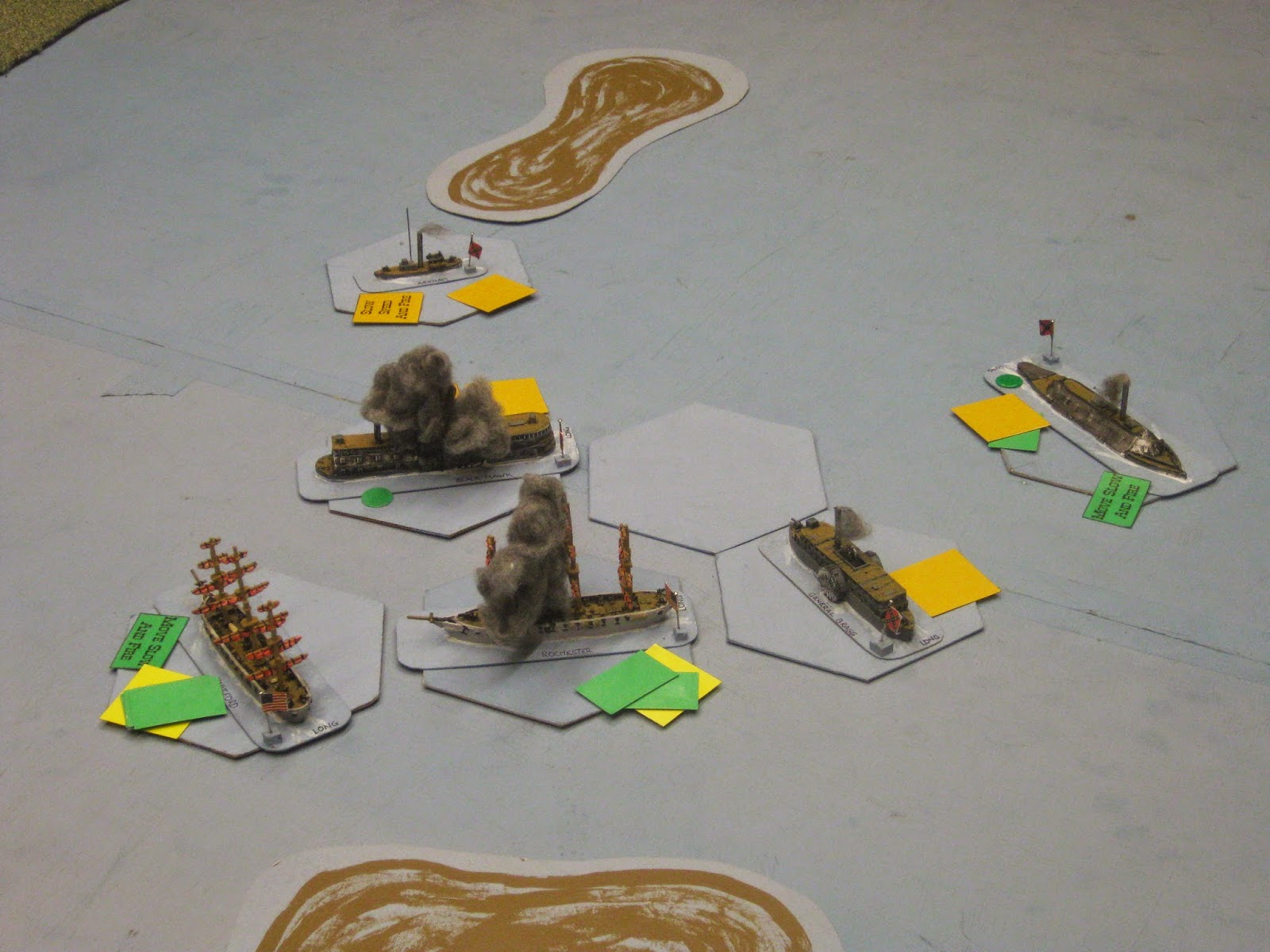 The Cumberland frees herself and the Virginia is likewise under way as well. She's moving slowly and has a big turning circle. Can she get at the Congress before she can restart her engines? The James River Fleet throw themselves into the action to hold the Union ships in place so the Virginia can get back into the battle. More fires break out.

Off camera the Union reinforcements arrive. 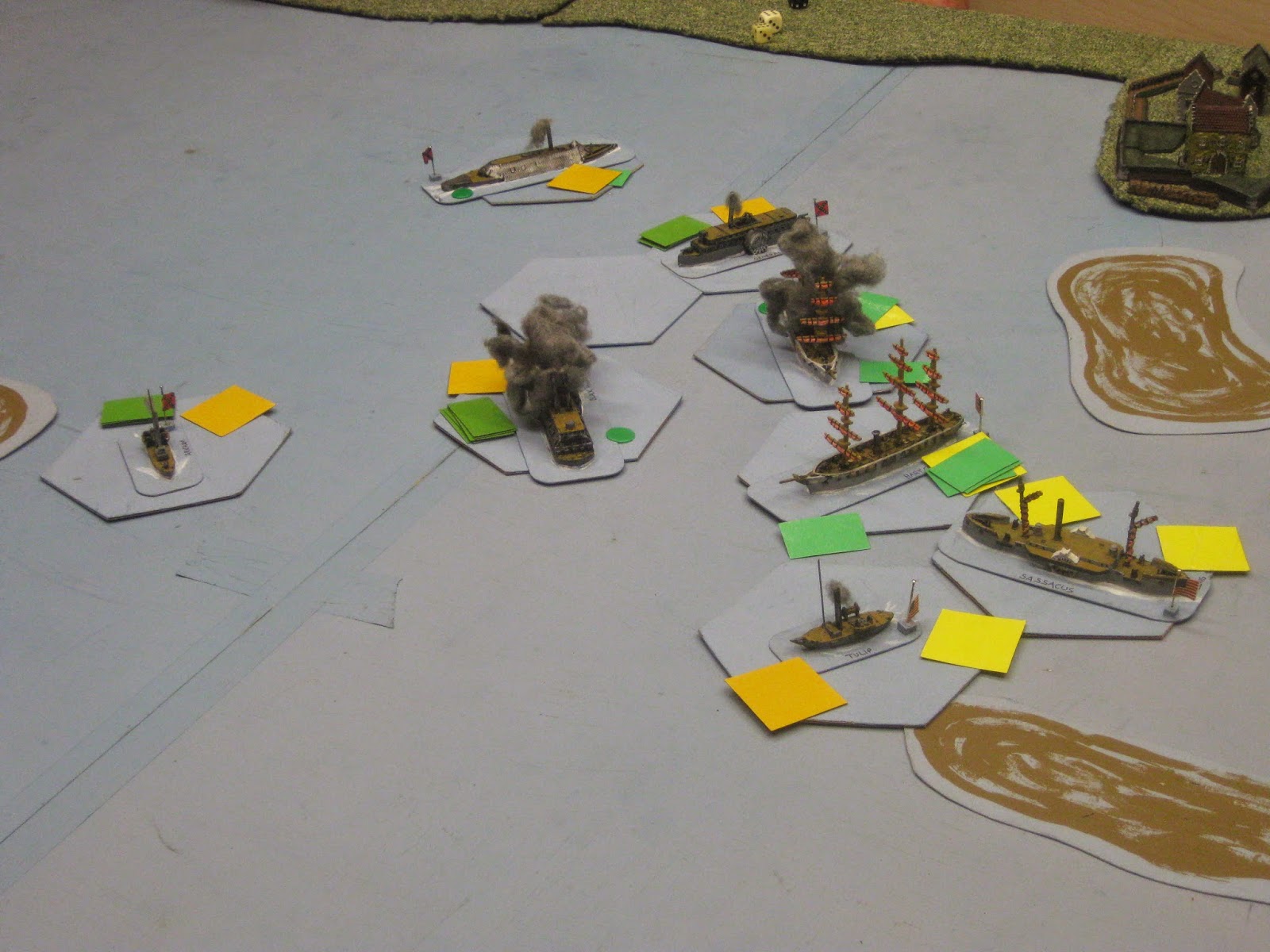 The CSS Patrick Henry (aka Blackhawk) is burning and immobile. The CSS Teaser is moving up to give her a tow.  The Union reserves are now involved. It's not looking good for the Rebels. 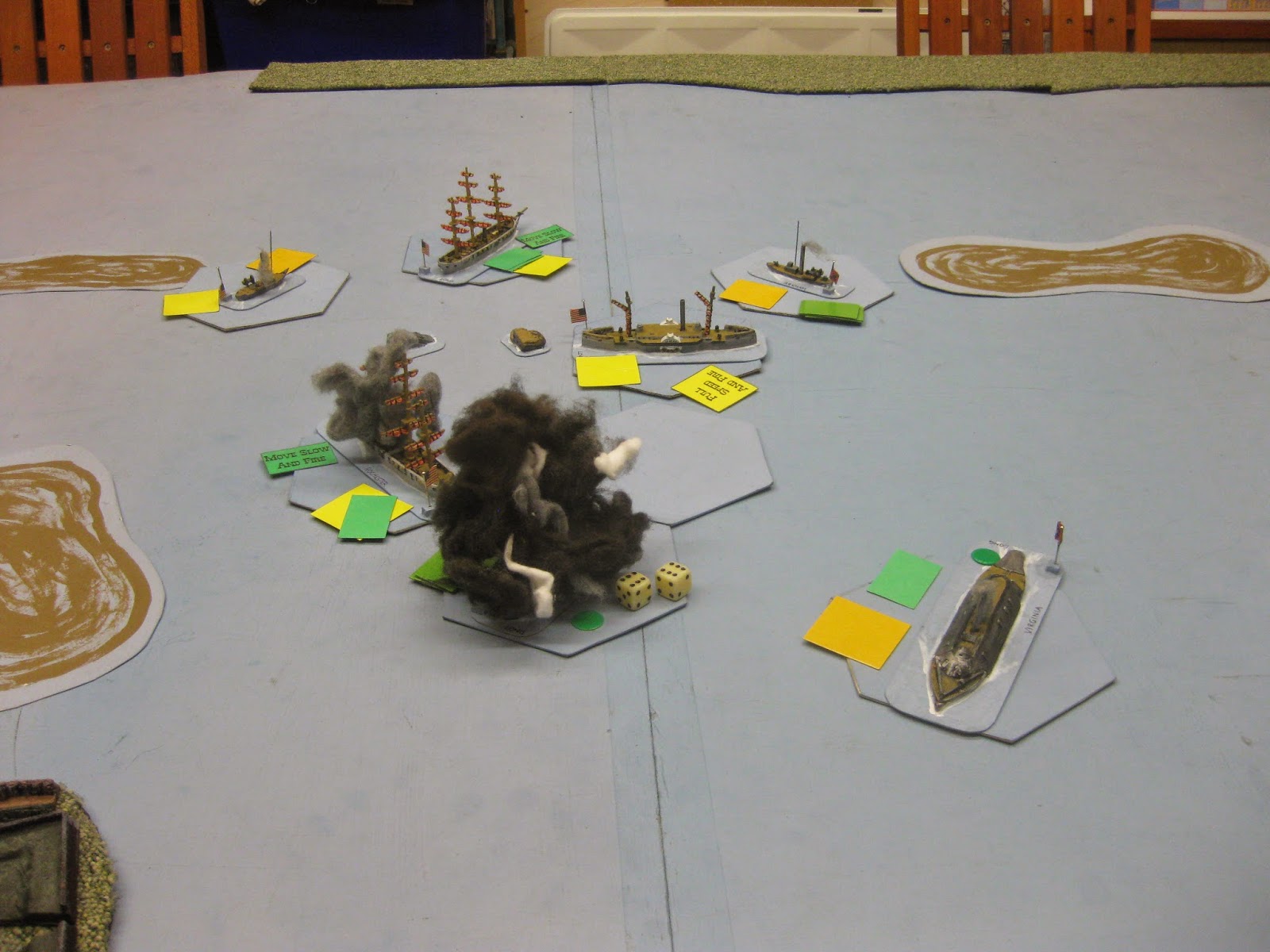 A hit to the CSS Jamestown's magazine causes a major explosion. The Virginia continues to limp round in her vast turning circle but her prey, the Congress, is still not moving. 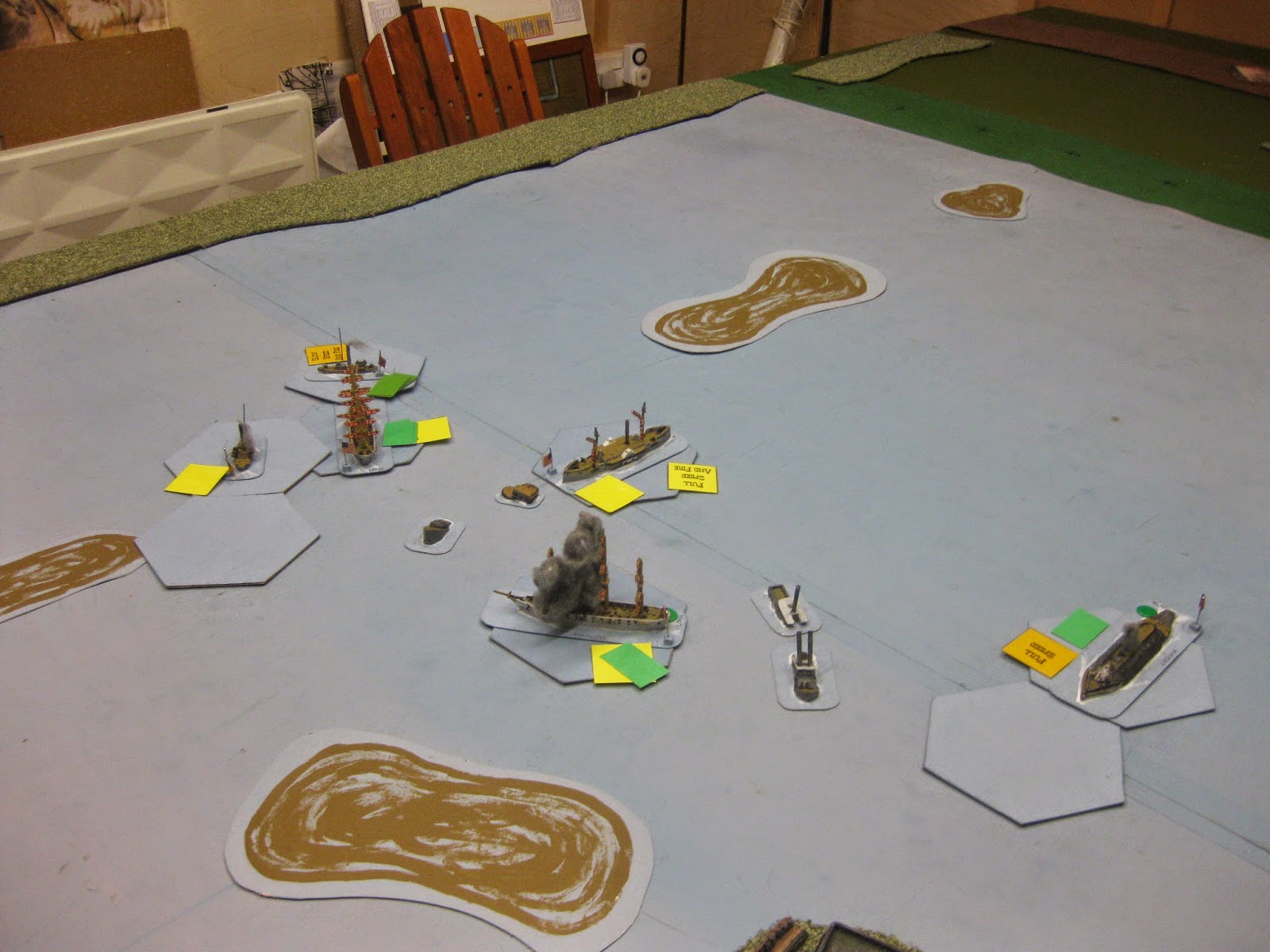 The Patrick Henry succumbs to the fire. The James River fleet is down to one ship. 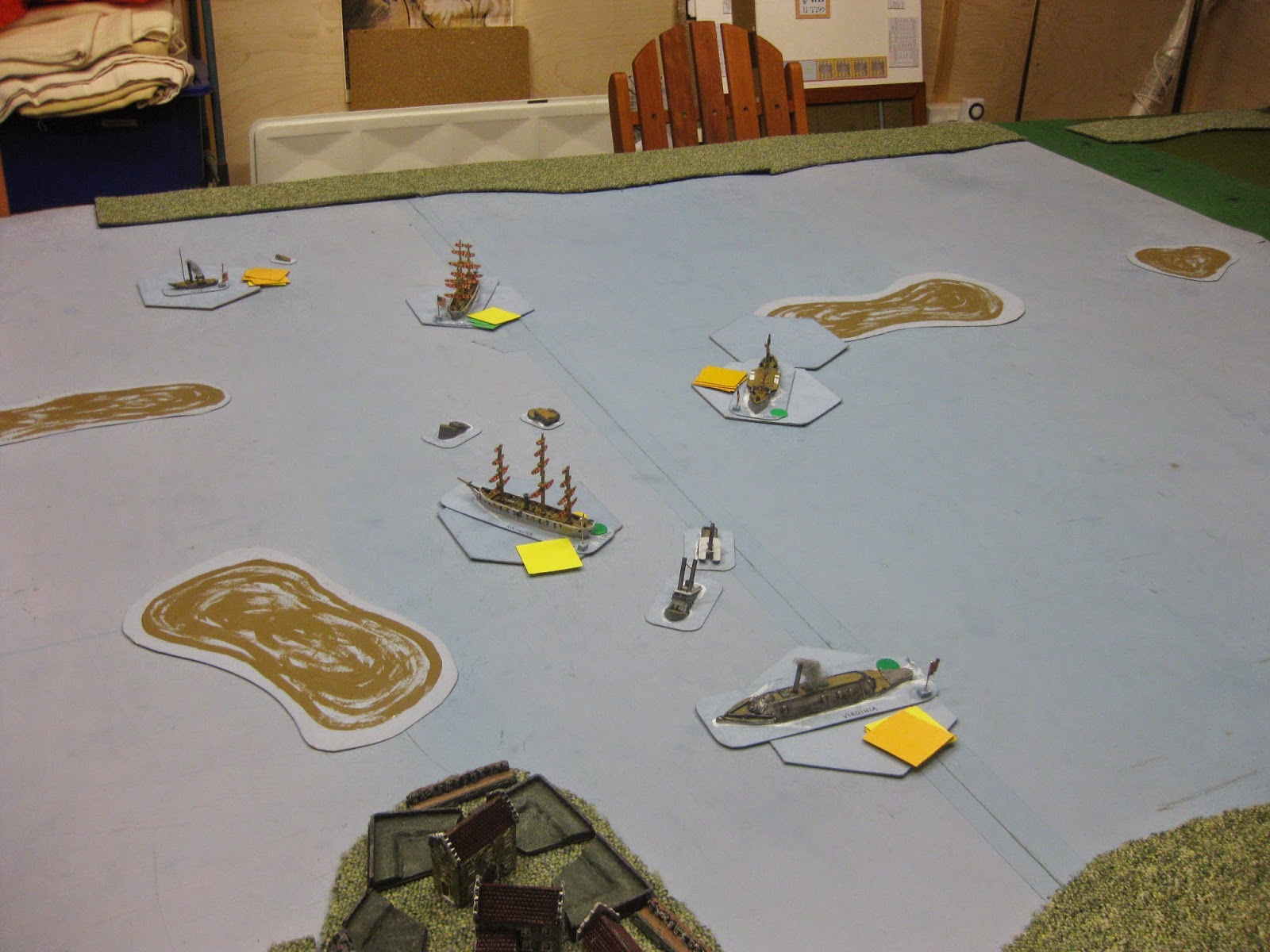 The "fleets" circle one another cautiously. The Virginia continues to turn (NB In the battle with the Monitor the Virginia took an hour to line up an ram, and then missed....history repeating itself, perhaps?) 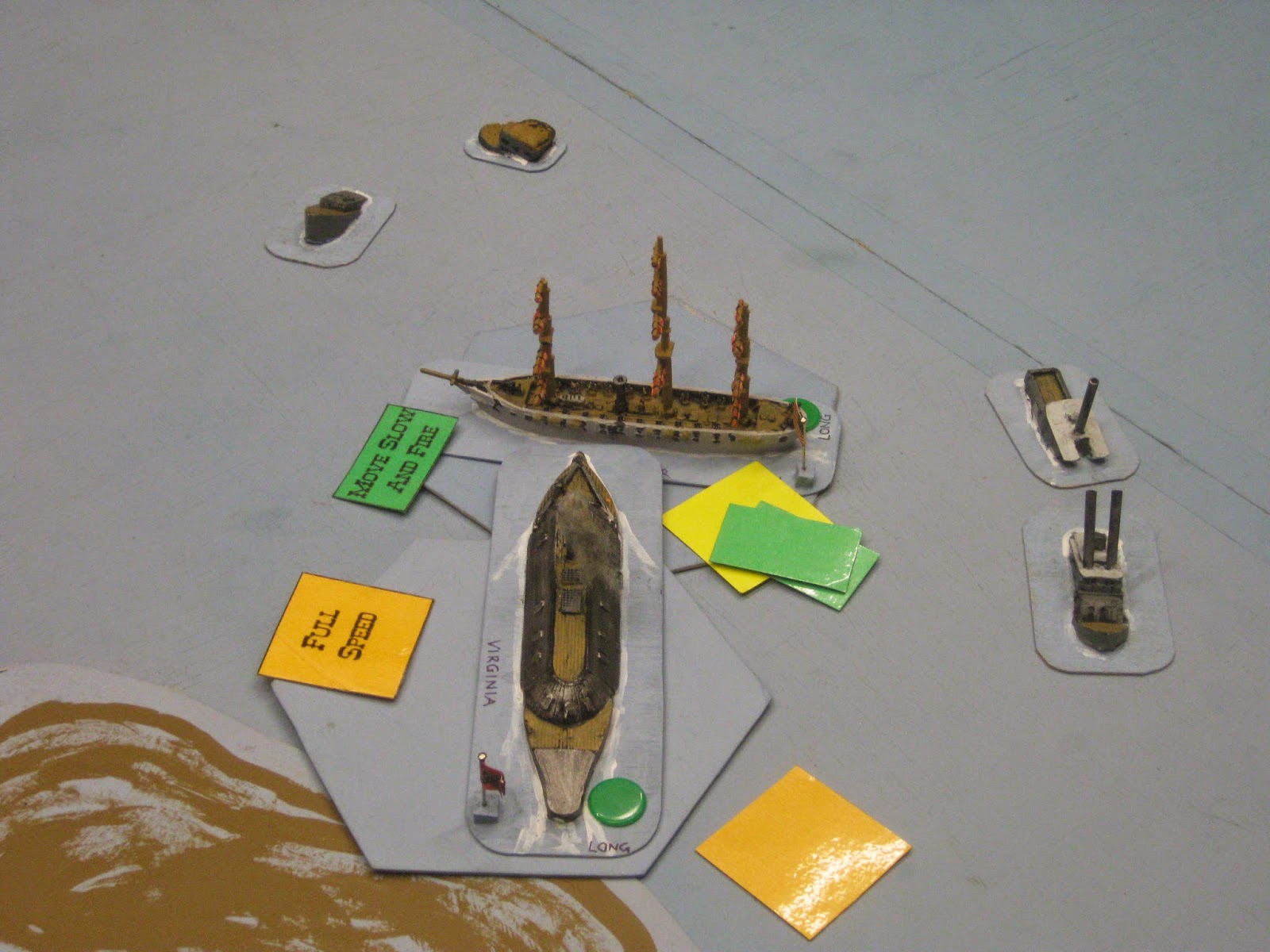 Finally the Virginia rams something, suffering a ferocious broadside as she comes in. 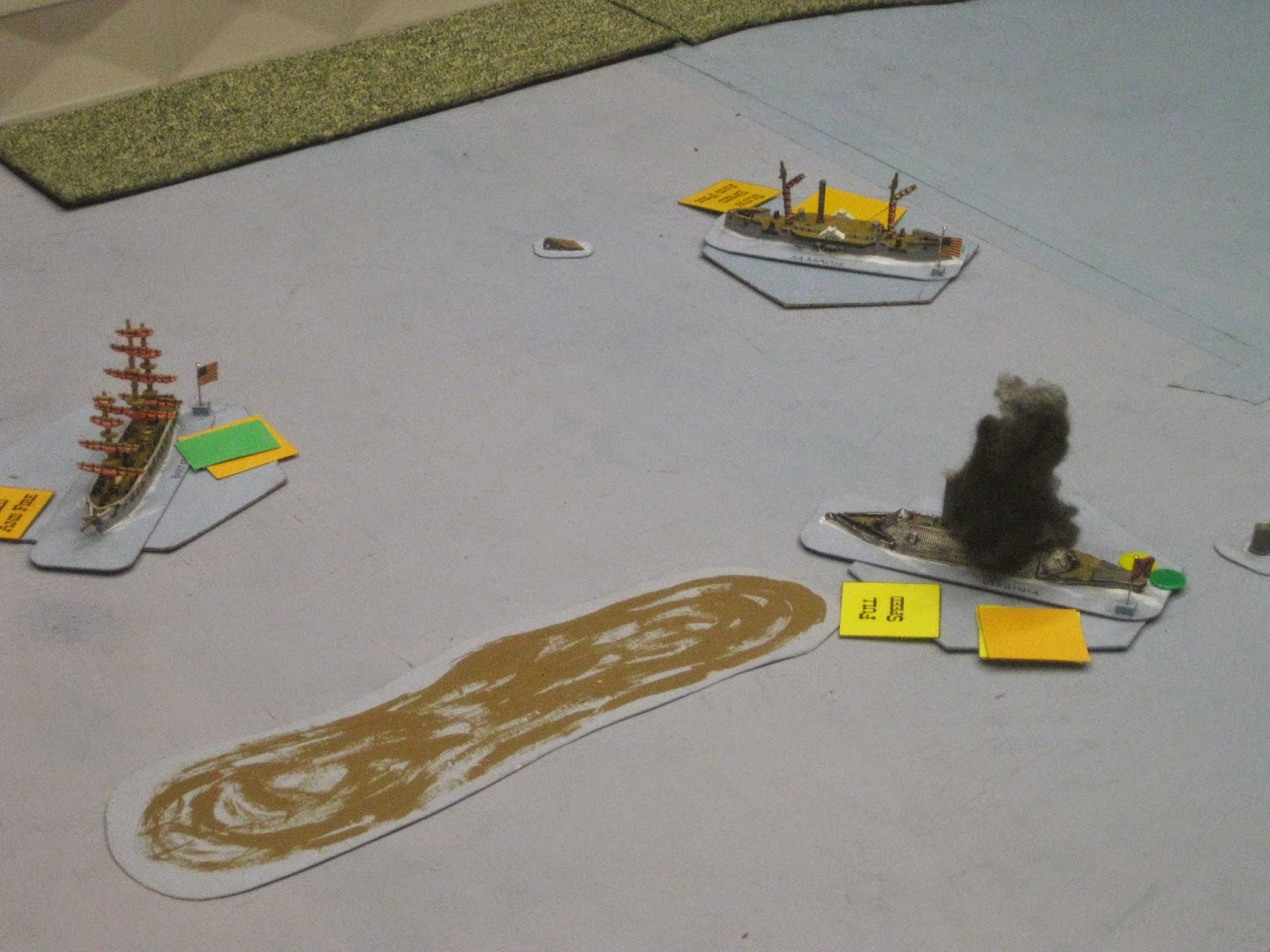 The Congress, struck squarely amidships, goes down spectacularly. Alas for the Virginia the impact damages her ram and causes a fire to break out. Desperately trying to put this out she starts to limp for home. 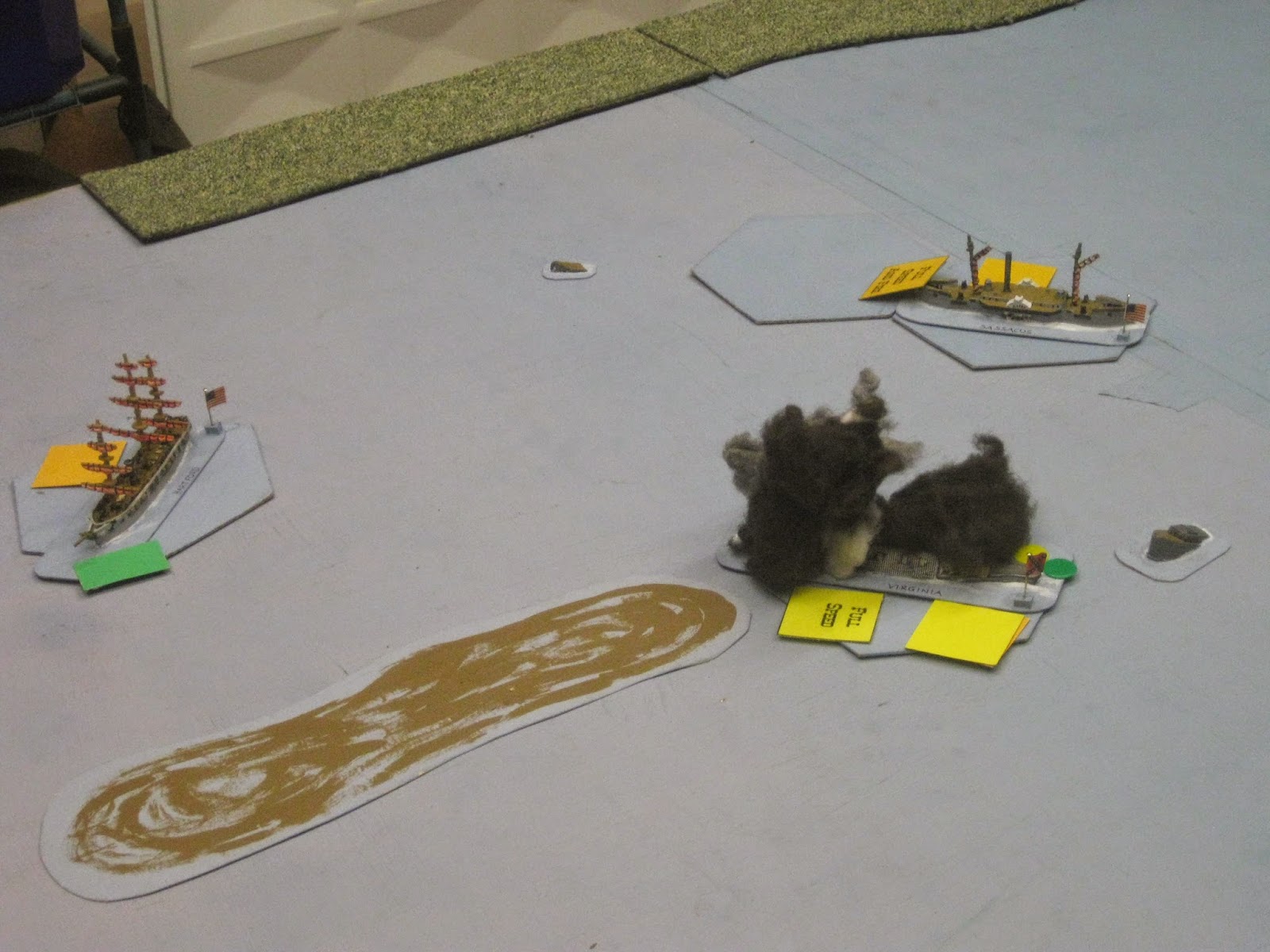 Then the Cumberland and USS Minnesota (aka Sassacus) get full broadsides on her and she expires. Game over.

A decisive victory for the Union, although pretty hairy with the loss of the Congress. The Virginia was very unlucky, and her loss of movement early on was significant.

We're still enjoying old "Hammerin' Iron 2". I updated my ship stats and gun layouts from the new book which Will had lent me. I think that before we play again I need to look at the saving rolls for proper ironclads. Historically the Virginia was pretty much immune to most of the fire directed at her, a fact not reflected in the game. Of course you need a bit of play balance and I don't want ships side to side pounding at each other for hours.

*This probably tells you quite a lot about the history of the USN. There's less than a dozen ships involved in which only one is sunk. Get some perspective, guys
Posted by Trebian at 11:51