More from the Russo-Turkish War

Our man with the Russians and Turks had another week off work (gotta fit his holiday in before the end of the year) so we decided to have another go with them.

We like the Neil Thomas rules, but we found for the very large games we're playing that they can be a bit slow. all that measuring and stuff. So Chris - the one with the Russians and Turks, - wondered if we could try and put it on squares.

Since we last played I'd acquired a copy of the rule book and knocked up a playsheet. we had a quick discussion about move distances & ranges then set the table up. 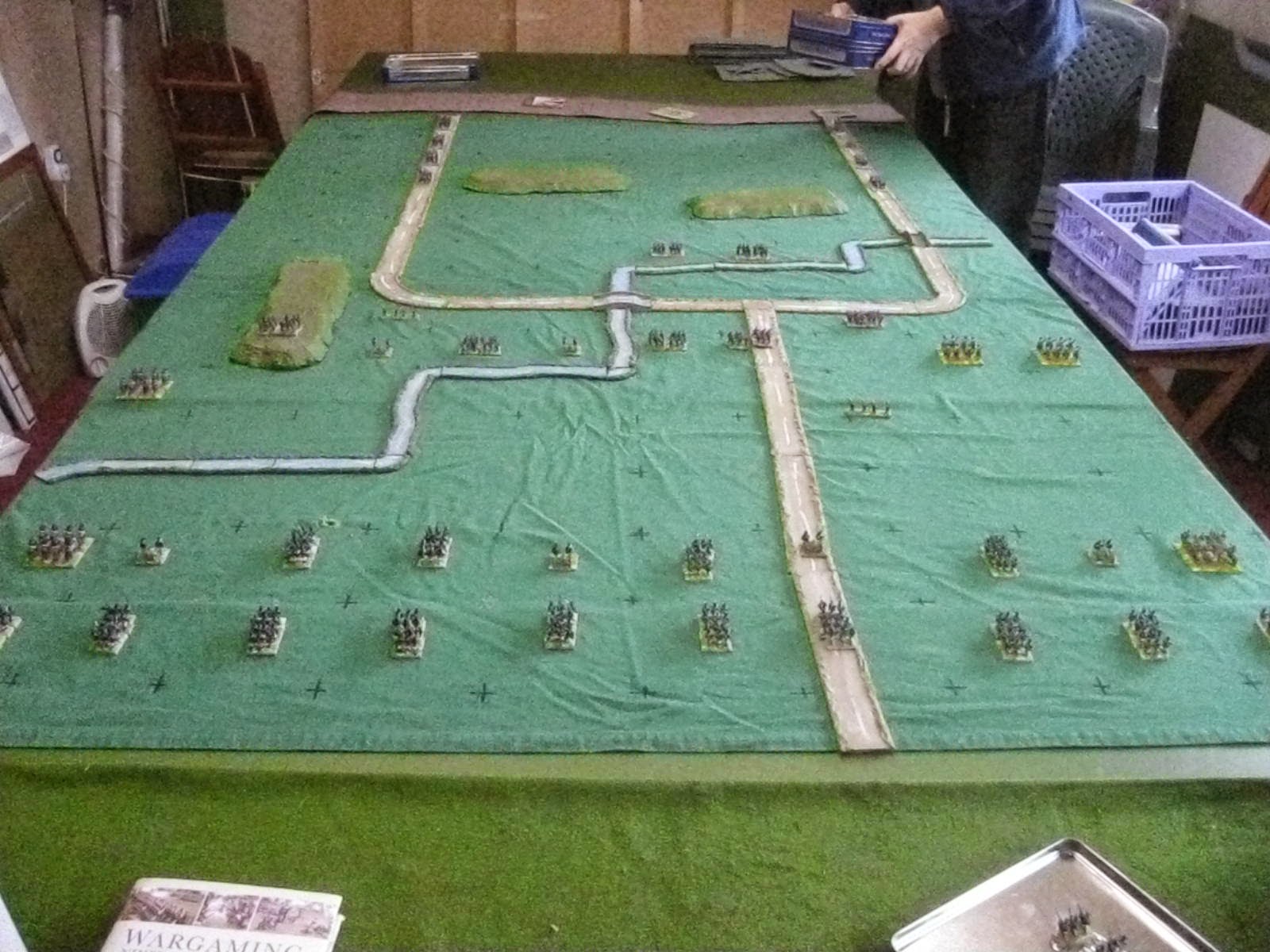 Loads of Russians have been set the task of storming the Turkish defence line. I got the Turks. Please note first official use of my river corners to allow the rivers to follow the square boundaries more easily. 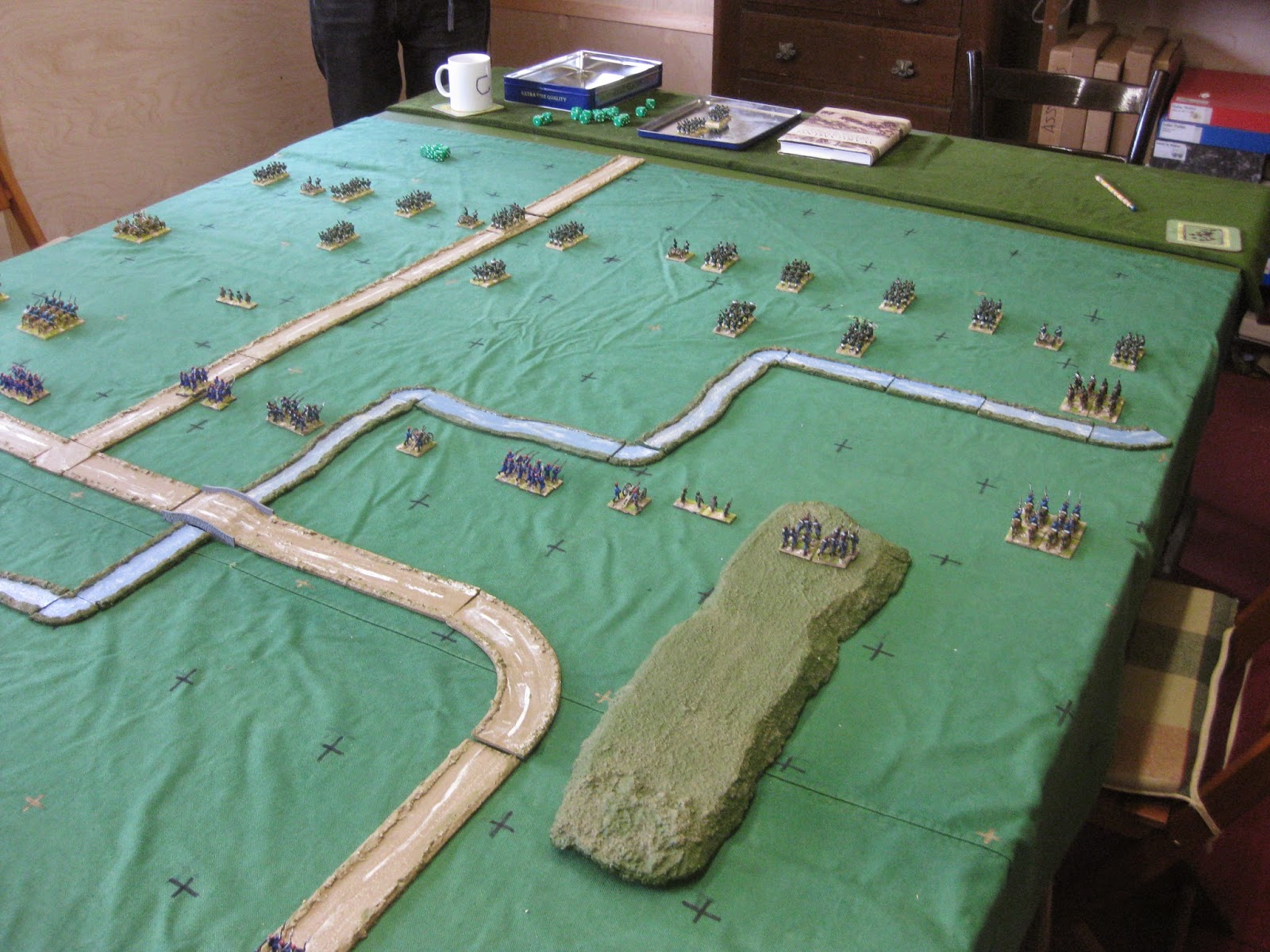 The Russians advanced generally. Chris spread his guns out along the line. I reckon he'd be better off as the Russians to set up a grand battery. Their firepower is otherwise pretty rubbish, as they can only deploy and fight in column. 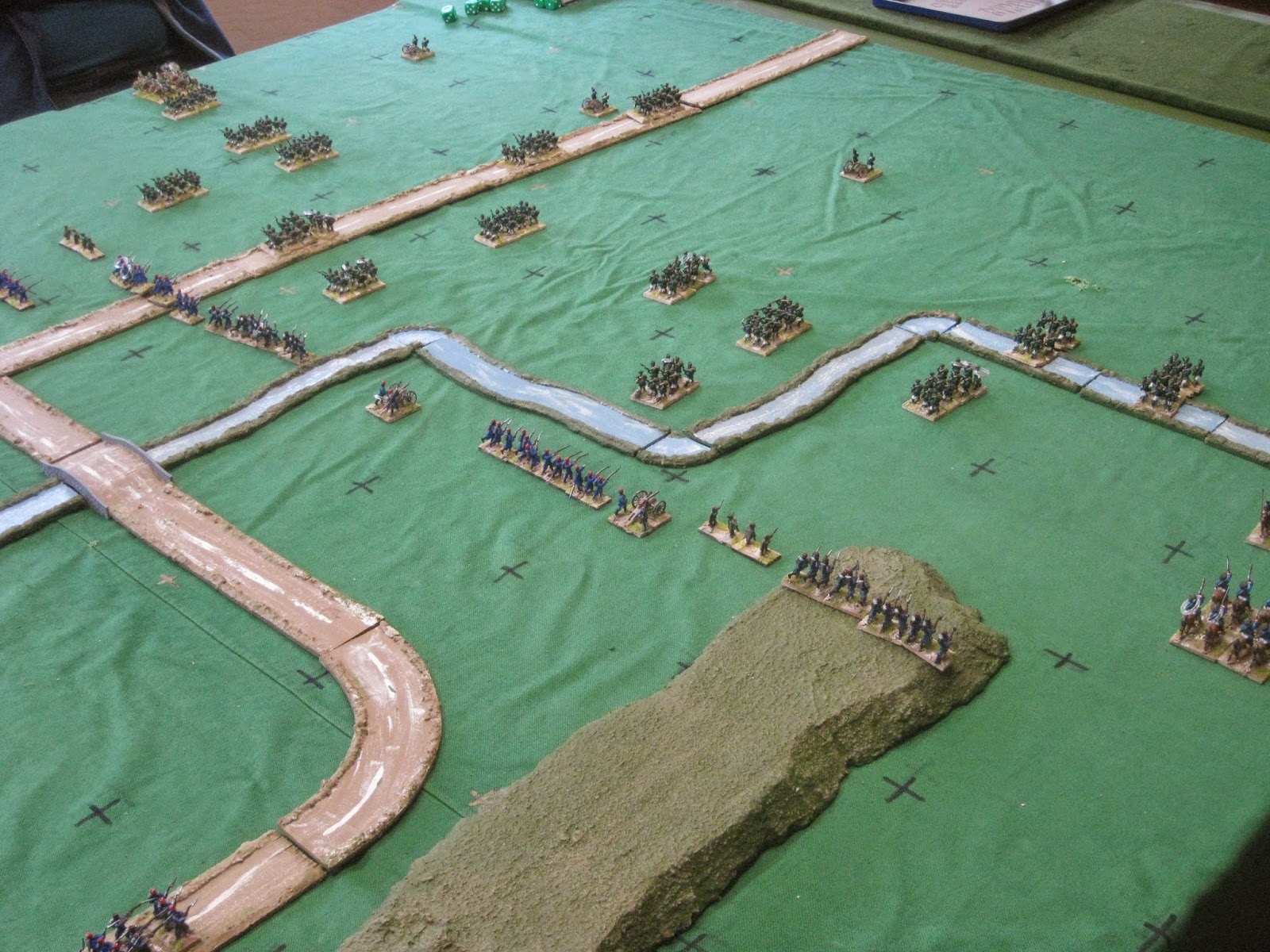 As we were using squares we thought it'd be okay to deploy the Turks in a single element depth line, rather than the usual 2 x 2 formation in the earlier photographs. 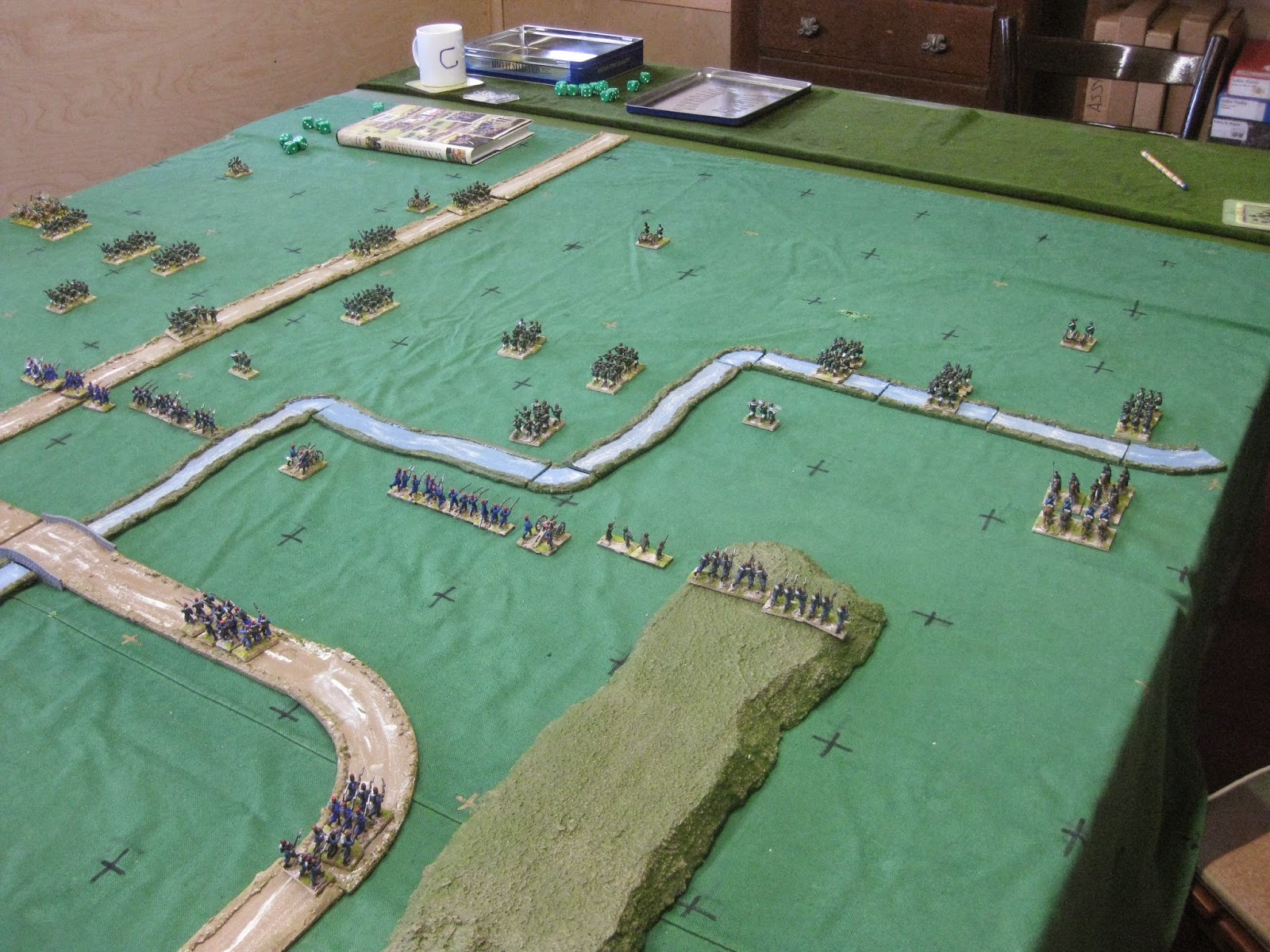 We had some cavalry tussles on the flanks and I generally came off worse. I knew I'd have to rely on my rifle armed Turkish militia to save the day, so blazed away merrily at the on-rushing Slavic hordes. 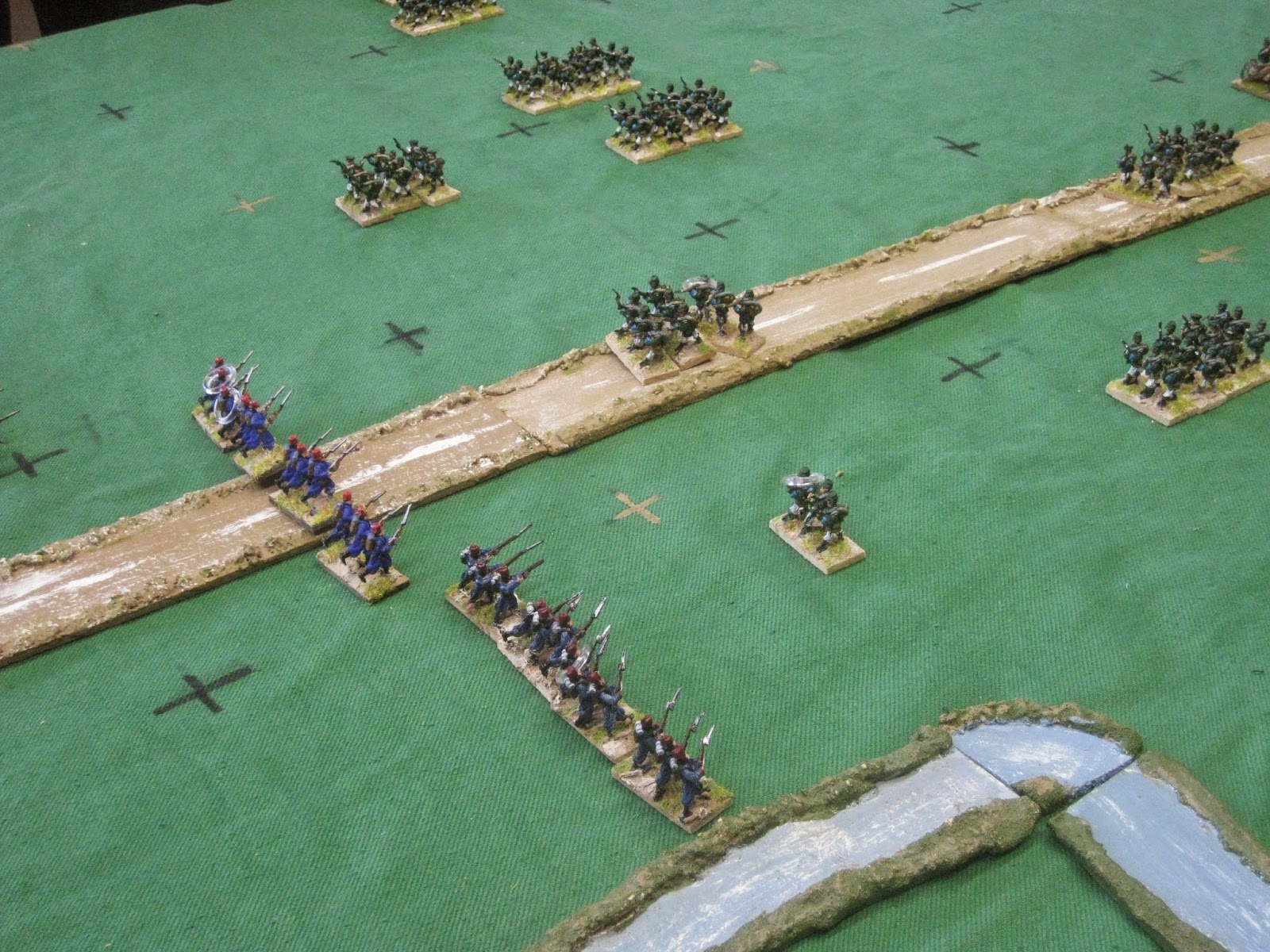 I did a pretty good job of that, blowing away a few columns as they approached. We have a question mark over density per square for units, or whether we need smaller squares 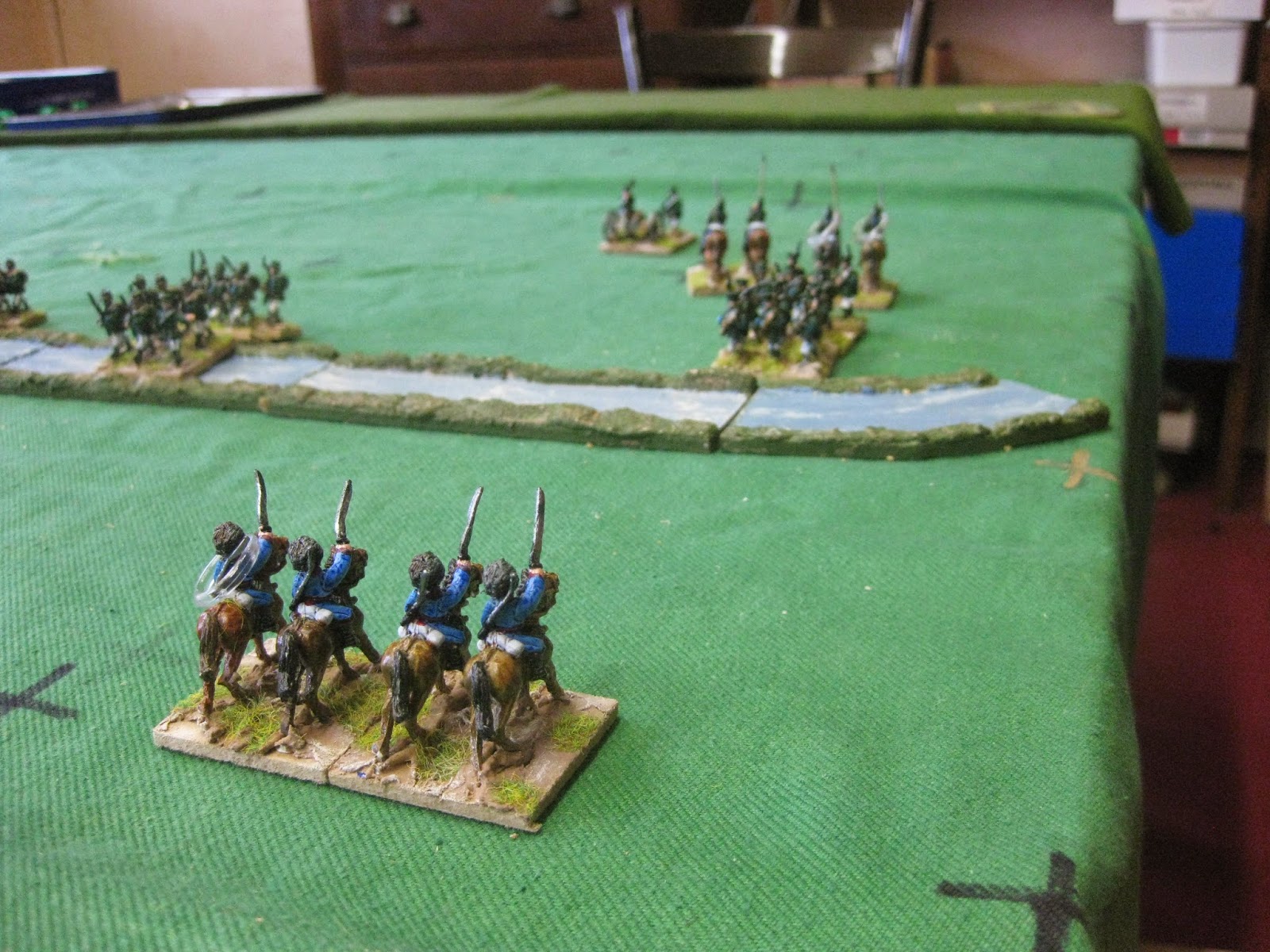 My dragoons were forced back from the river line, but I gave the Russian dragoons a bloody nose first. I'm in danger here of having the flank turned. Luckily I'm facing Russians. 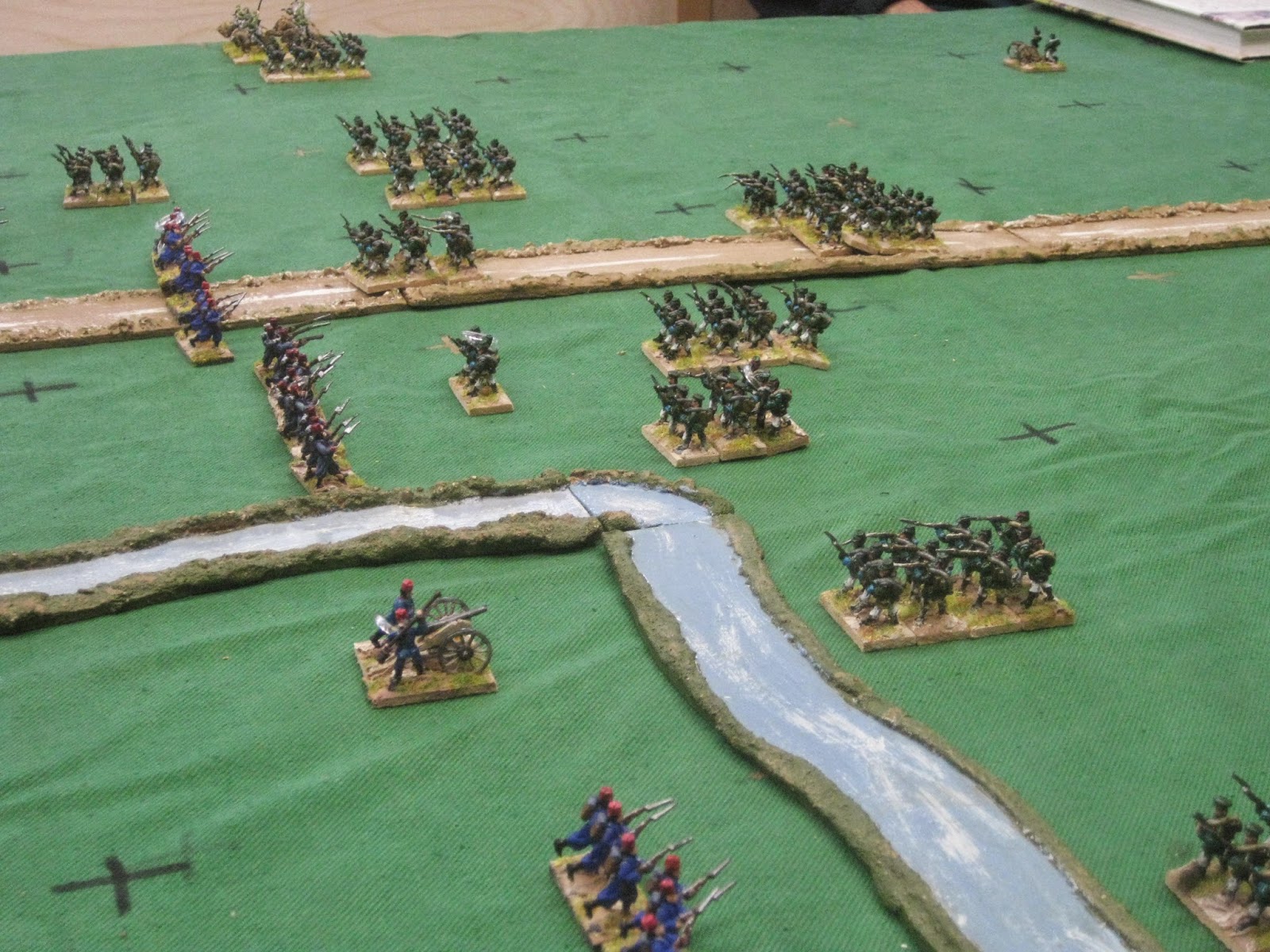 And still they come. At this point I realise that my line has some holes in it where the guns are. Whoops. 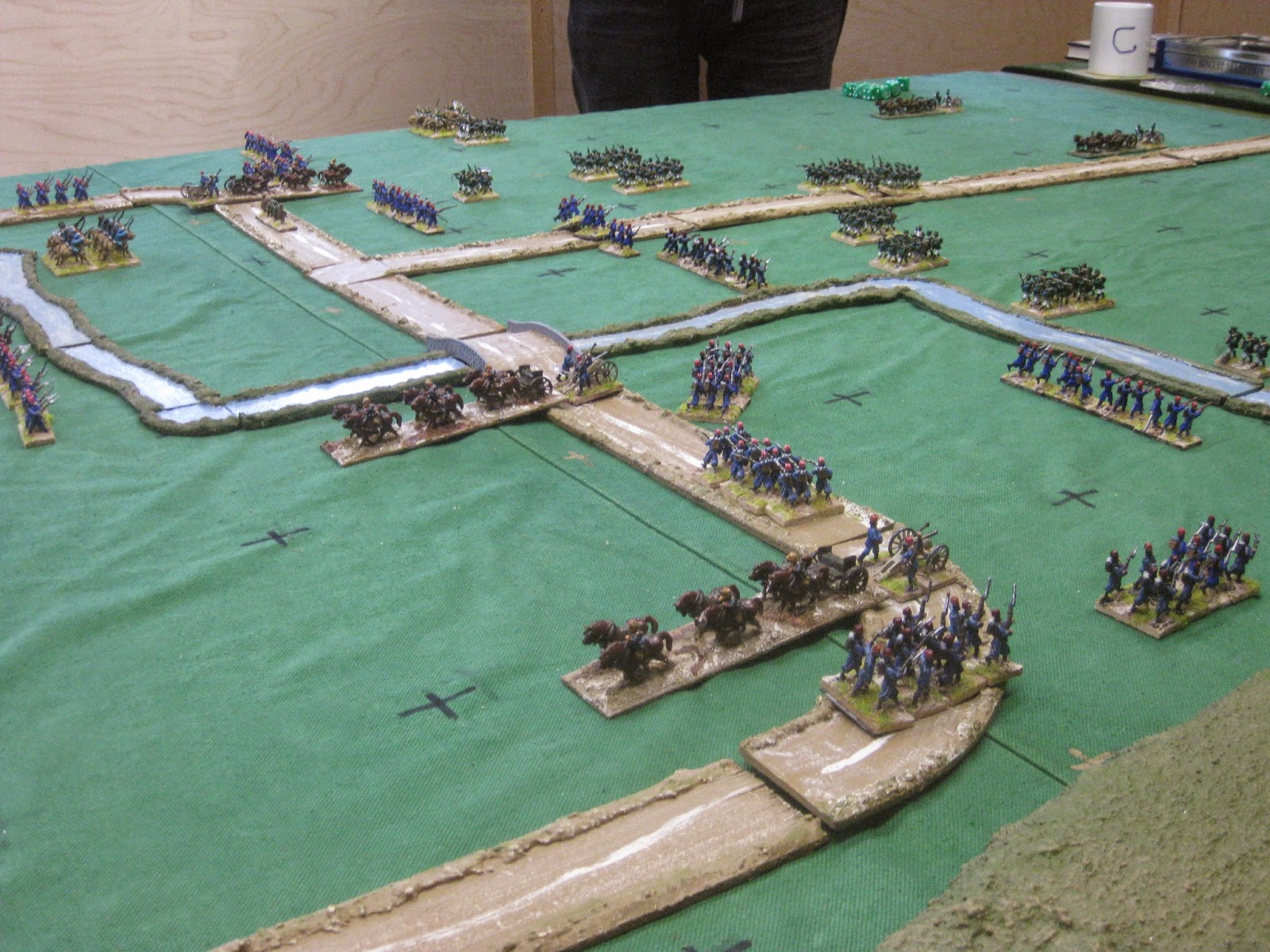 I rapidly deployed some infantry into the gaps, and limbered up my guns (the sharp eyed amongst you will notice the limbers aren't exactly Turkish as Chris hasn't got any. Yet). 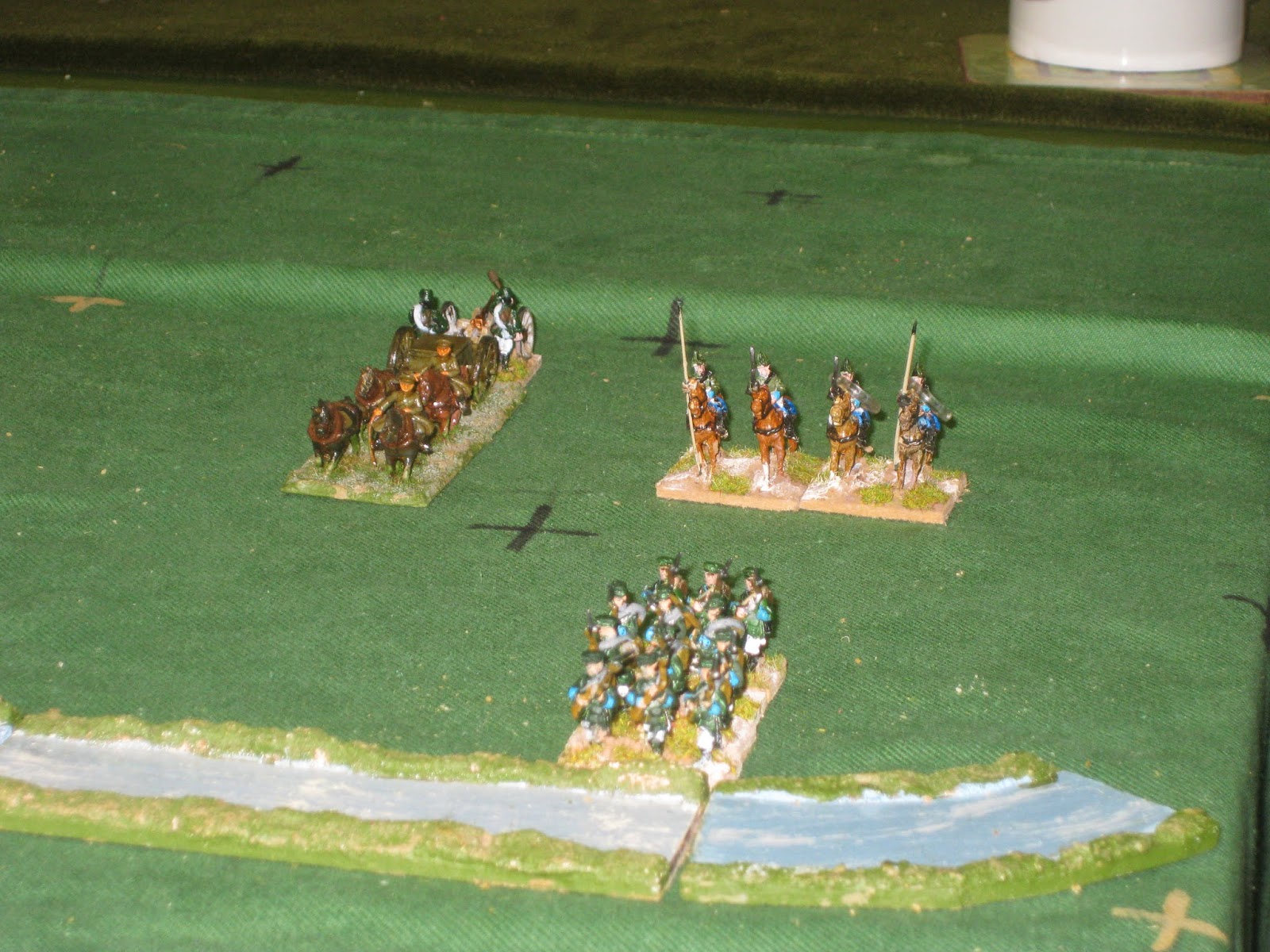 The Russians limber up and move their guns forward as well. The limber bases are green as they're my limbers, but they are Russian. They're Minifig Crimean limbers modified for the RCW. 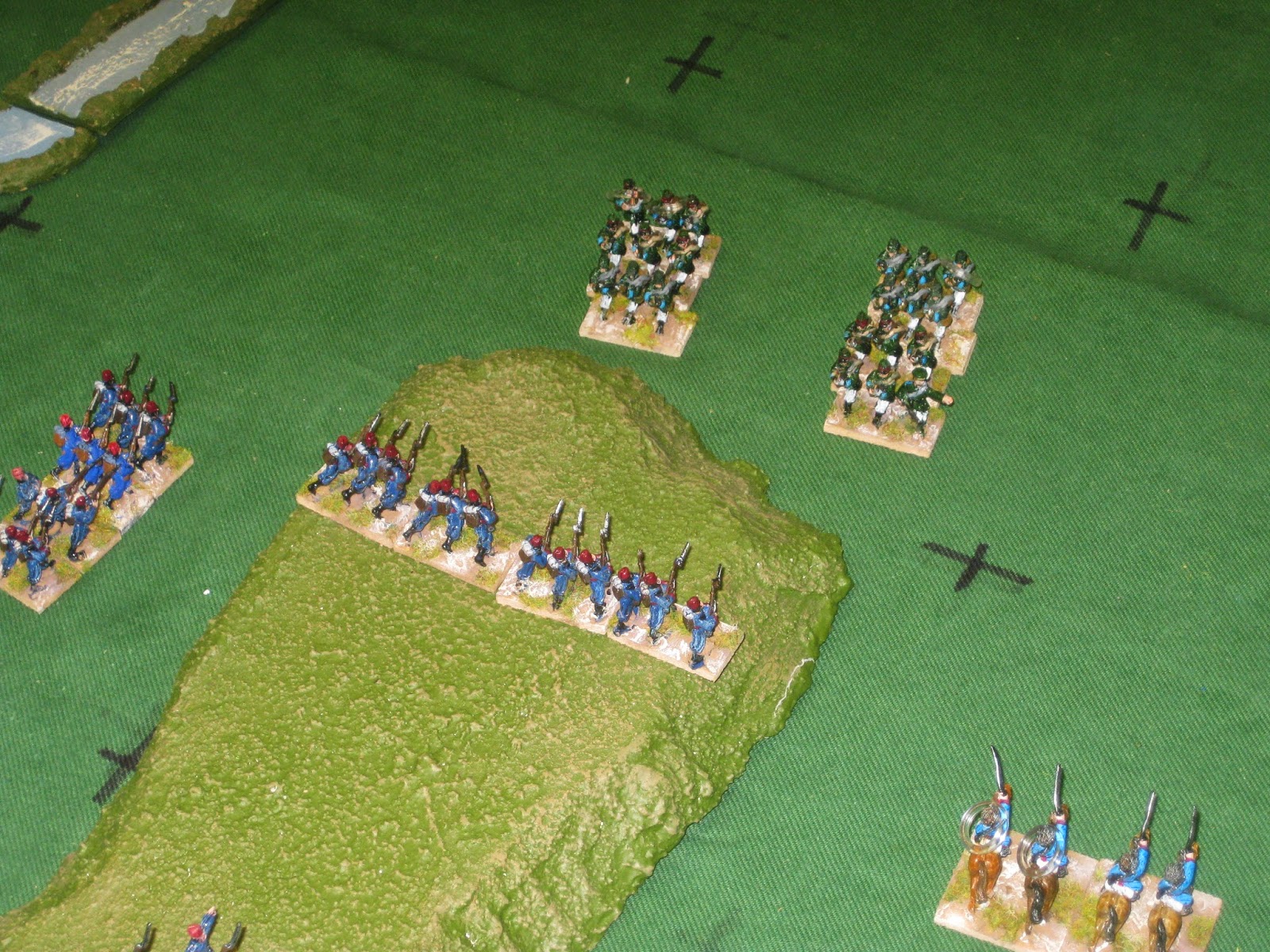 The Russians mass for the attack on the hill on my right. We had a bit of a discussion here. We like the NT rule that only one unit can fight to each face of a defending unit, but we felt the supporting column in the square should make a difference, so we added one d6 per base for the attackers. I think this should be up to a maximum of the bases in the smaller of the two units. 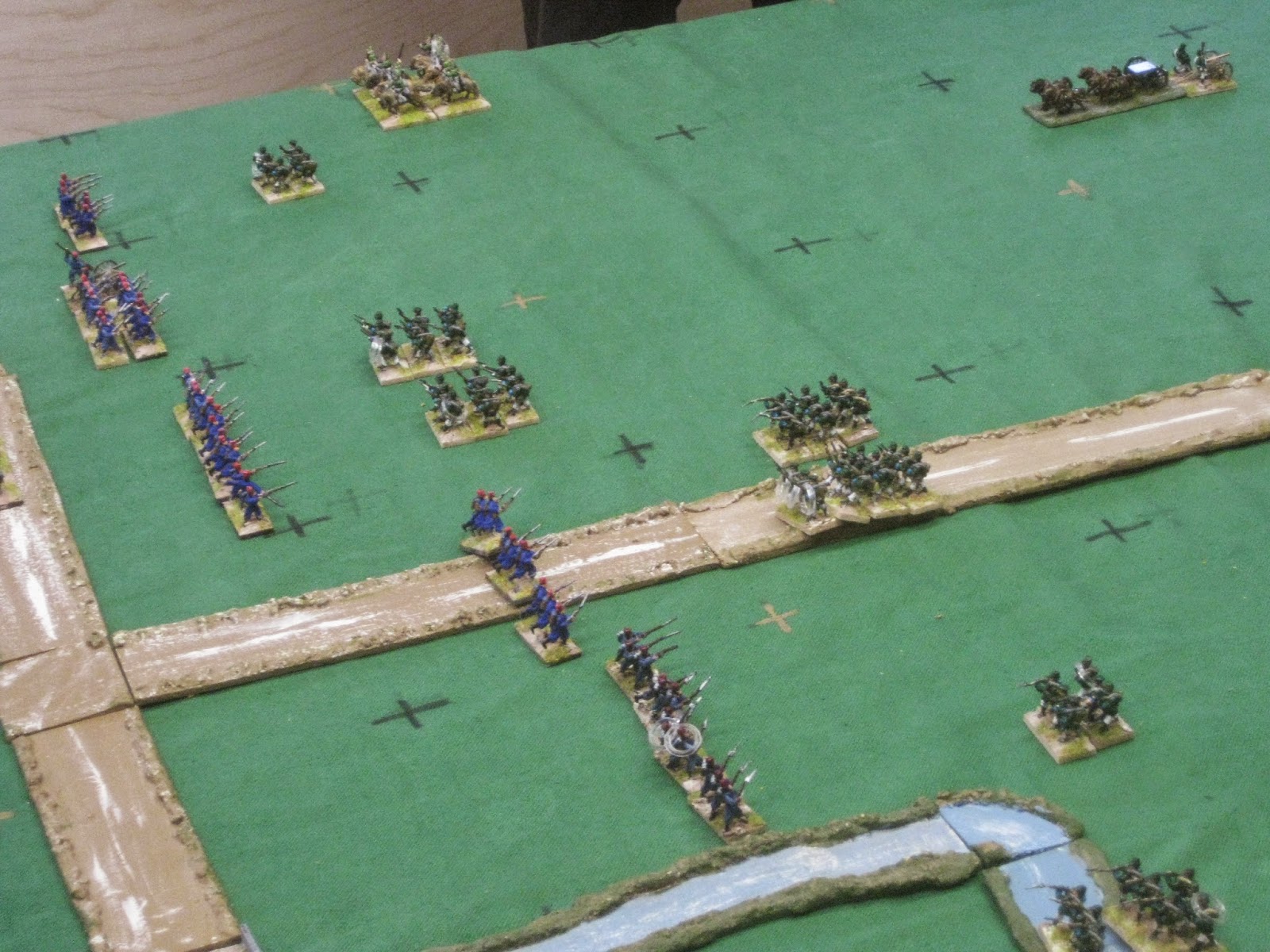 And still they come. 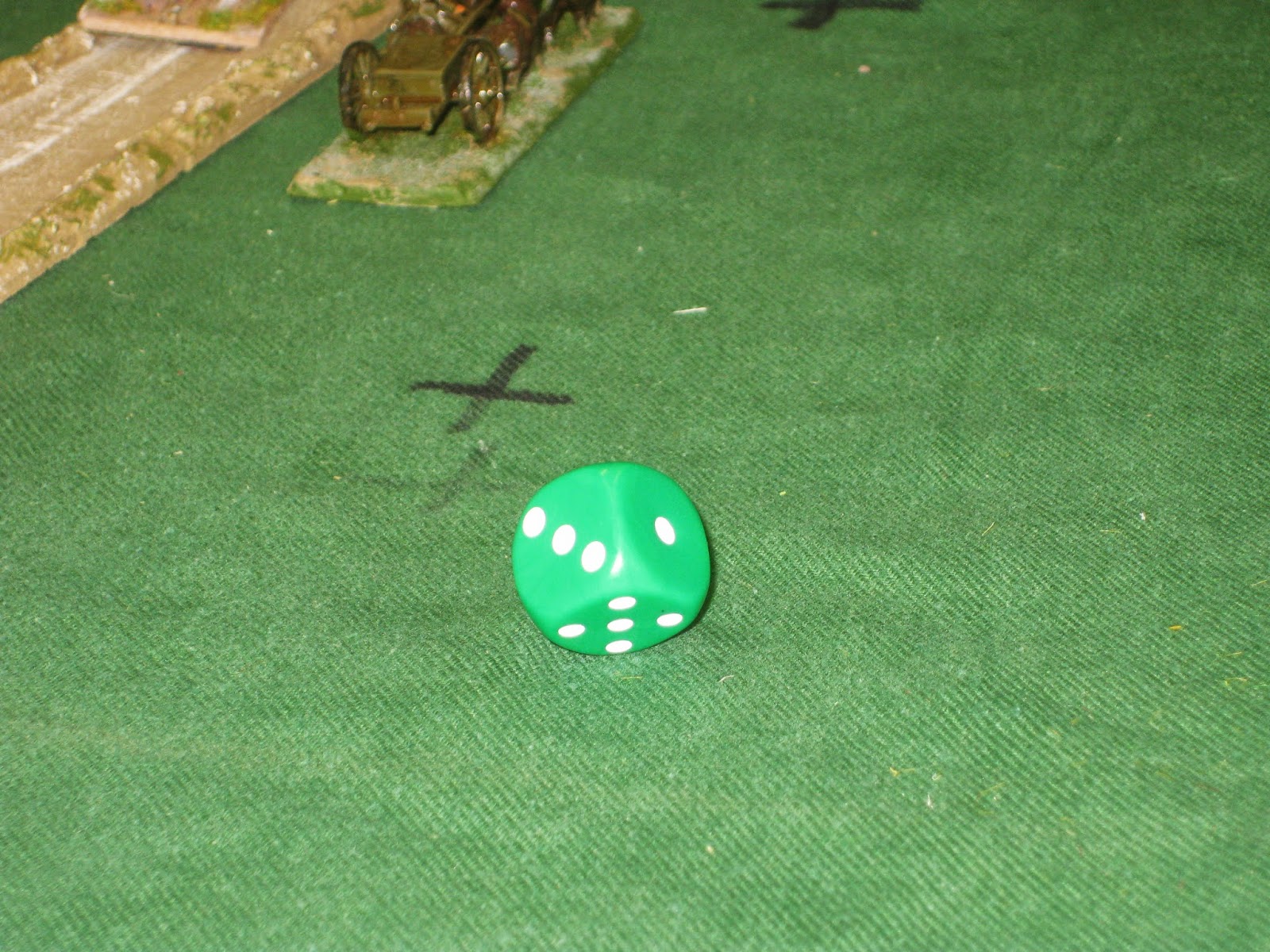 This just happened. That is a properly cocked dice. 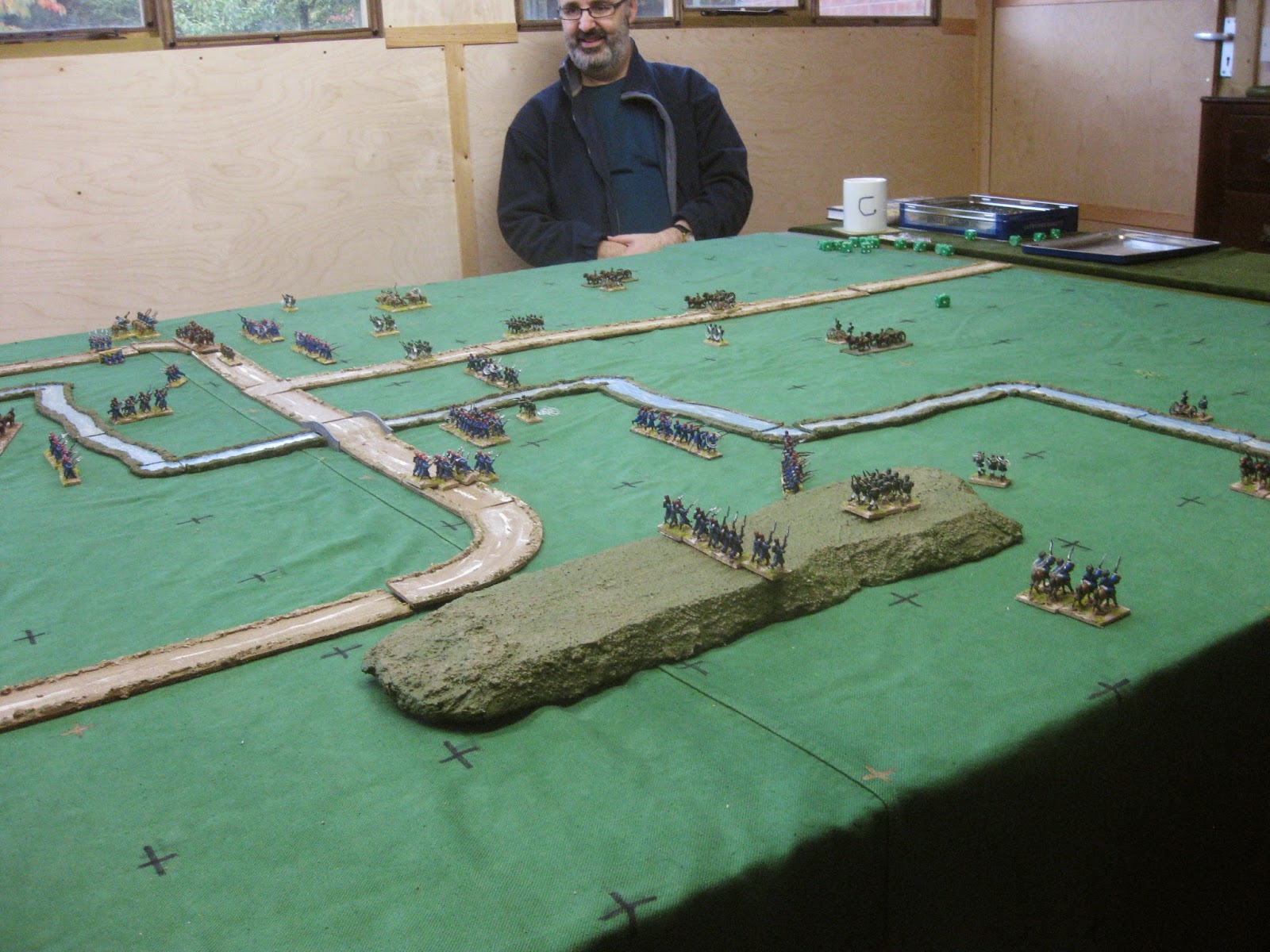 As you can see the Russians forced my unit on the hill back, but elsewhere they died in droves and the Turks booked a big win, without deploying their full forces.

The square experiment worked pretty well, although we have some slight refining to get it right. It certainly speeded the game up. This took about 3 hours and we had a lot of toys on the table.

Left us enough time for a game of AMW.