Last month I went to London and tried to visit the new Great War Gallery at the Imperial War Museum. I wrote about it here: Visit to London.

In summary we were unable to get into that gallery and I was underwhelmed by the exhibits and the general lack of understanding by the visitors elsewhere.

Today I had to be back in the City for a sort of interview for a totally hush-hush job. Honest. The only time this could be arranged was for 9:30am on a Friday, which left me the rest of the day in London. I tried to hook up with some contacts, most of whom were having a Friday off (although I did meet up with someone for lunch) so I was slightly at a loose end. Well, I thought, why not try the IWM again.

I'm glad I did. The Great War Gallery is excellent.

The exhibits are exceptional. Well chosen, well displayed and well explained. The non-exhibit displays are also very, very good. Very clear explanations of why the war started and what was going on at each stage of the conflict. Excellent hands on stuff for kids & grown ups (including a good touch screen game about keeping essential supplies flowing into the UK through the U-Boat threat. The key is to form convoys everyone, and give them an escort).

The place was very busy, and not just school parties. You still get amazing levels of ignorance ("Of course German Machine Guns were so much better than ours". No they weren't.) but I have to give a very honourable mention to one woman in particular.

She was a young teacher with a group of 13-14 year olds. They were industriously doing their work sheets. They were well behaved and well mannered. She worked her way round the various groups pointing out what they should be looking at and giving clear and correct explanations of what was being looked at. She was, to my mind, a model professional. I know she'll never read this, but well done to you, young lady. You are a credit to the much-maligned teaching profession.

Any how, I took some pictures too. 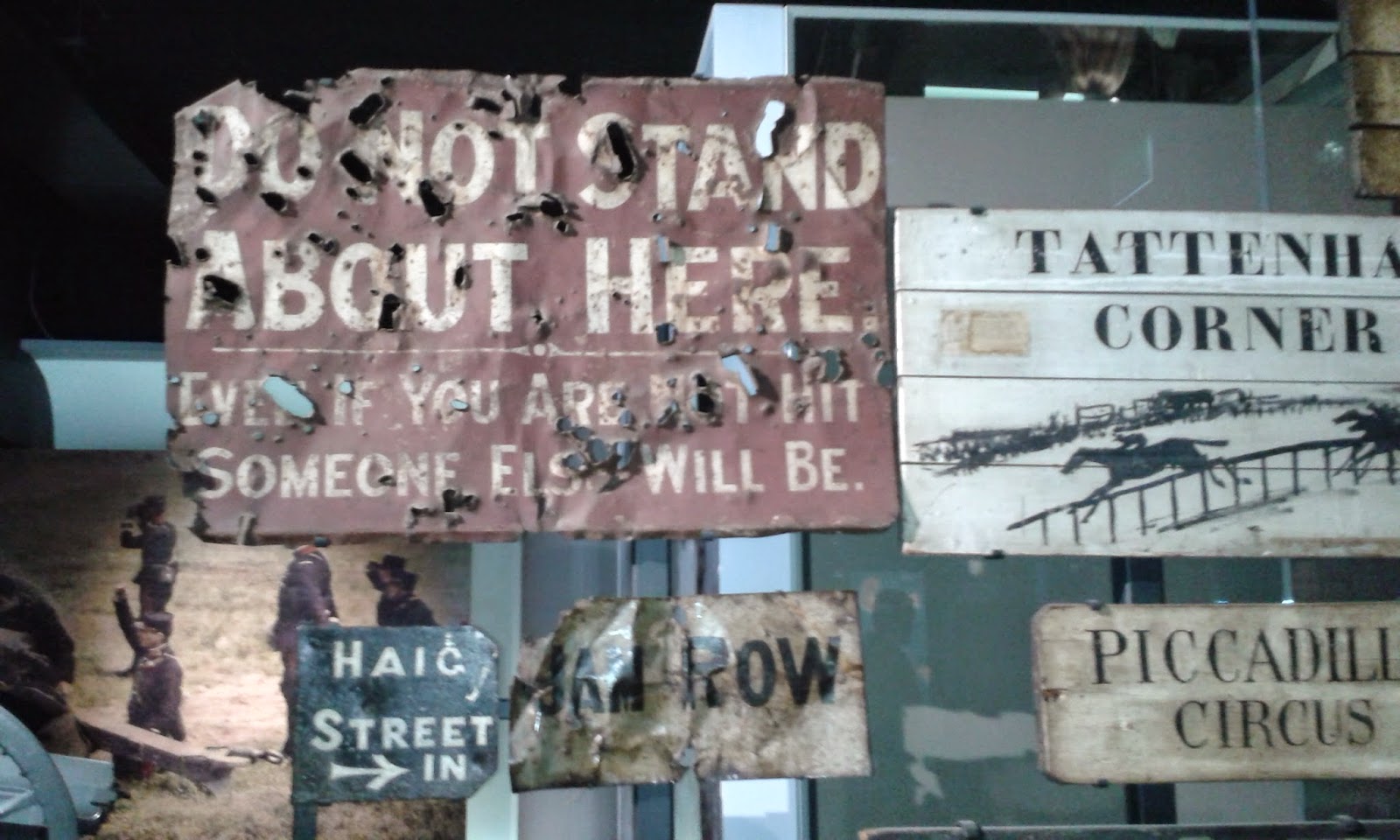 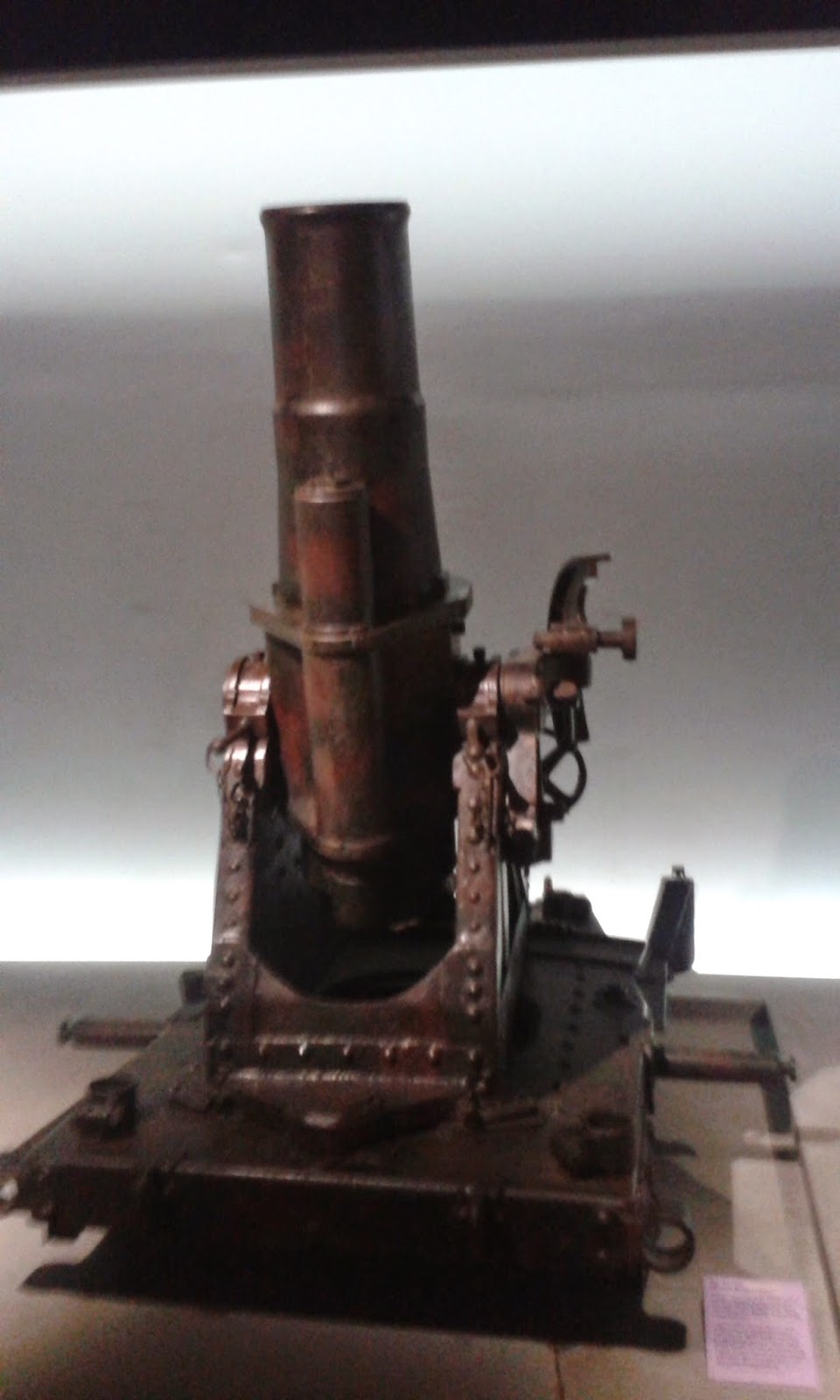 A minenwerfer. No idea of scale, which is makes this a poor picture, but the things were big and heavy. Not exactly the most mobile of trench weapons. 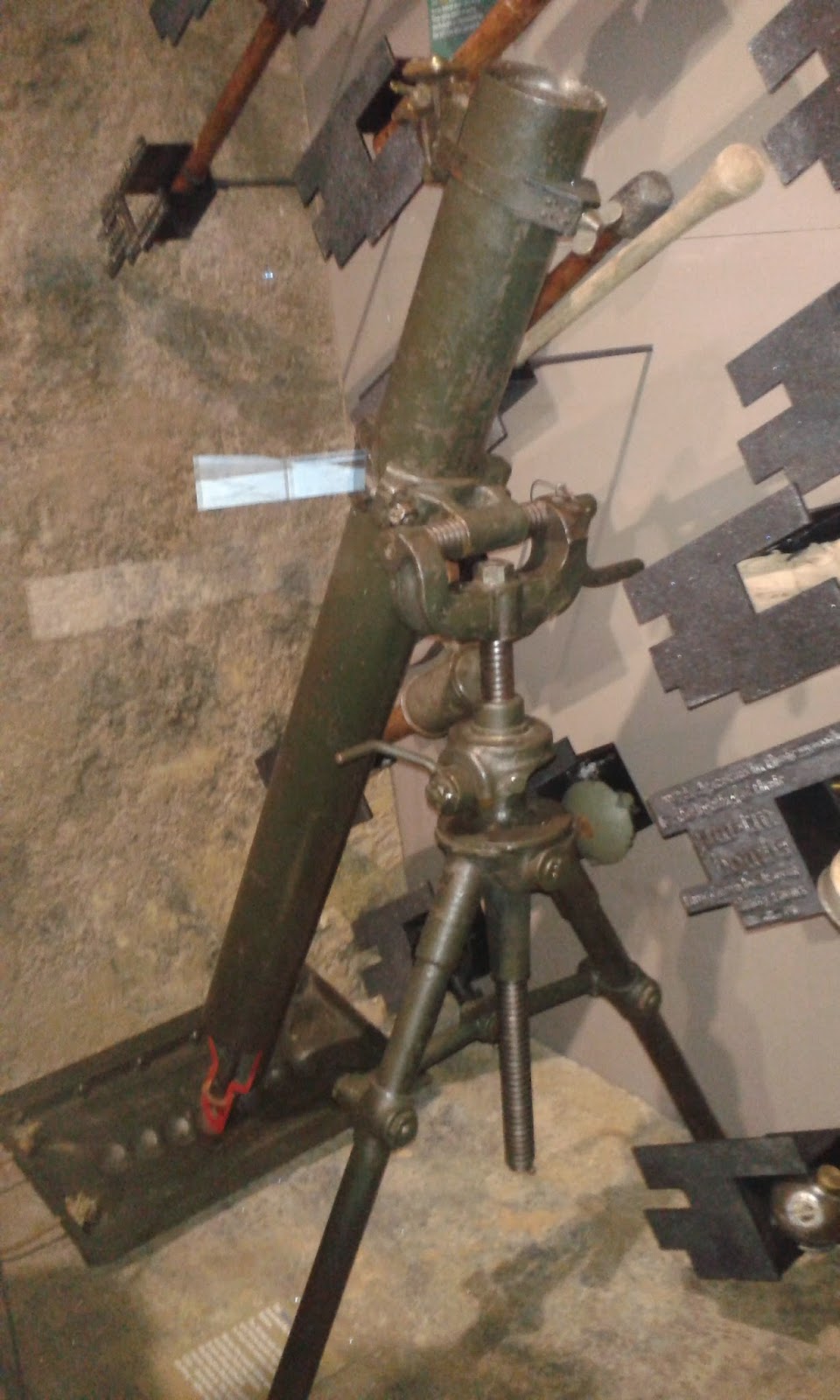 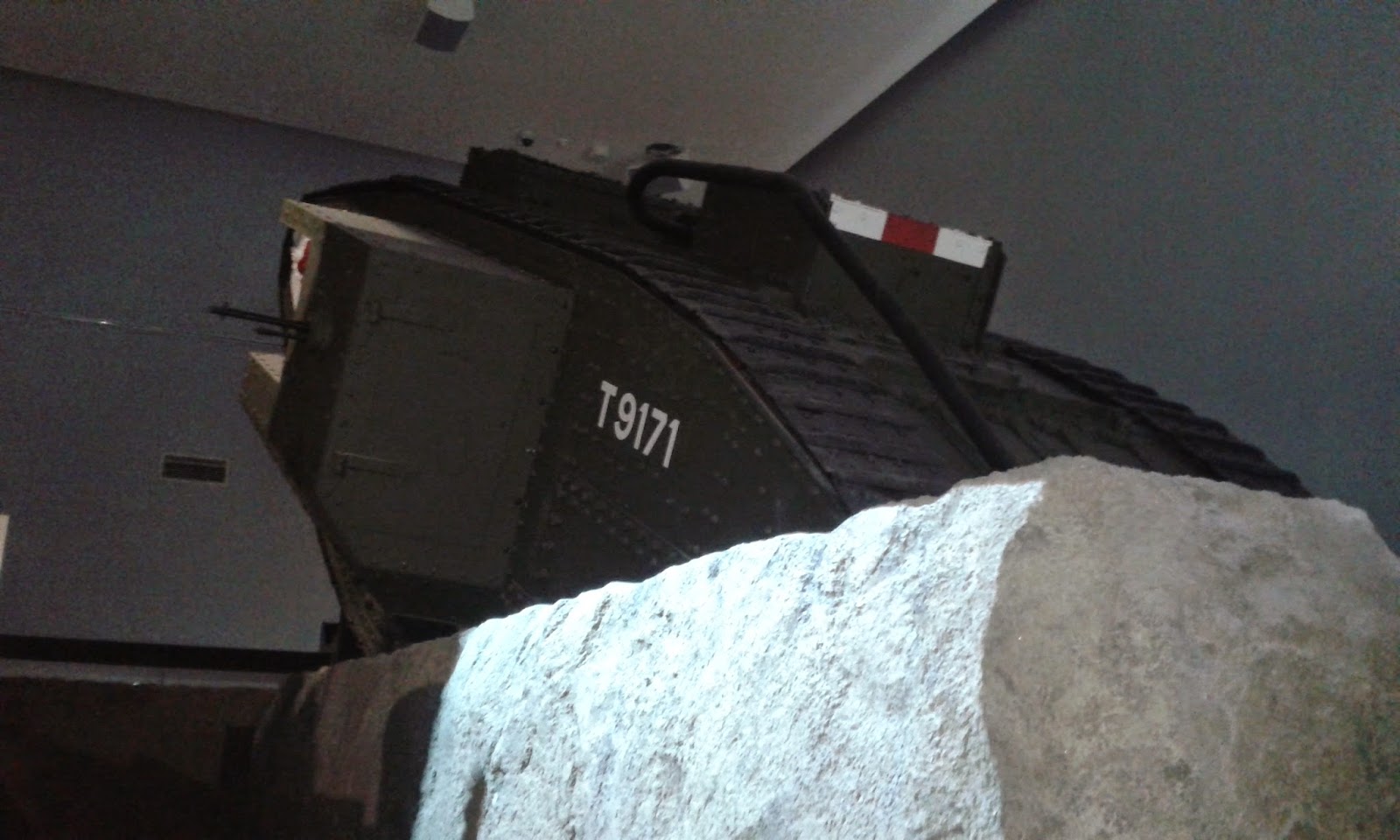 Yeah. They've got a tank, crossing a fake trench. That white looking piece of trench wall was illuminated with shadow projections of troops moving on it with a sound track. Very good. 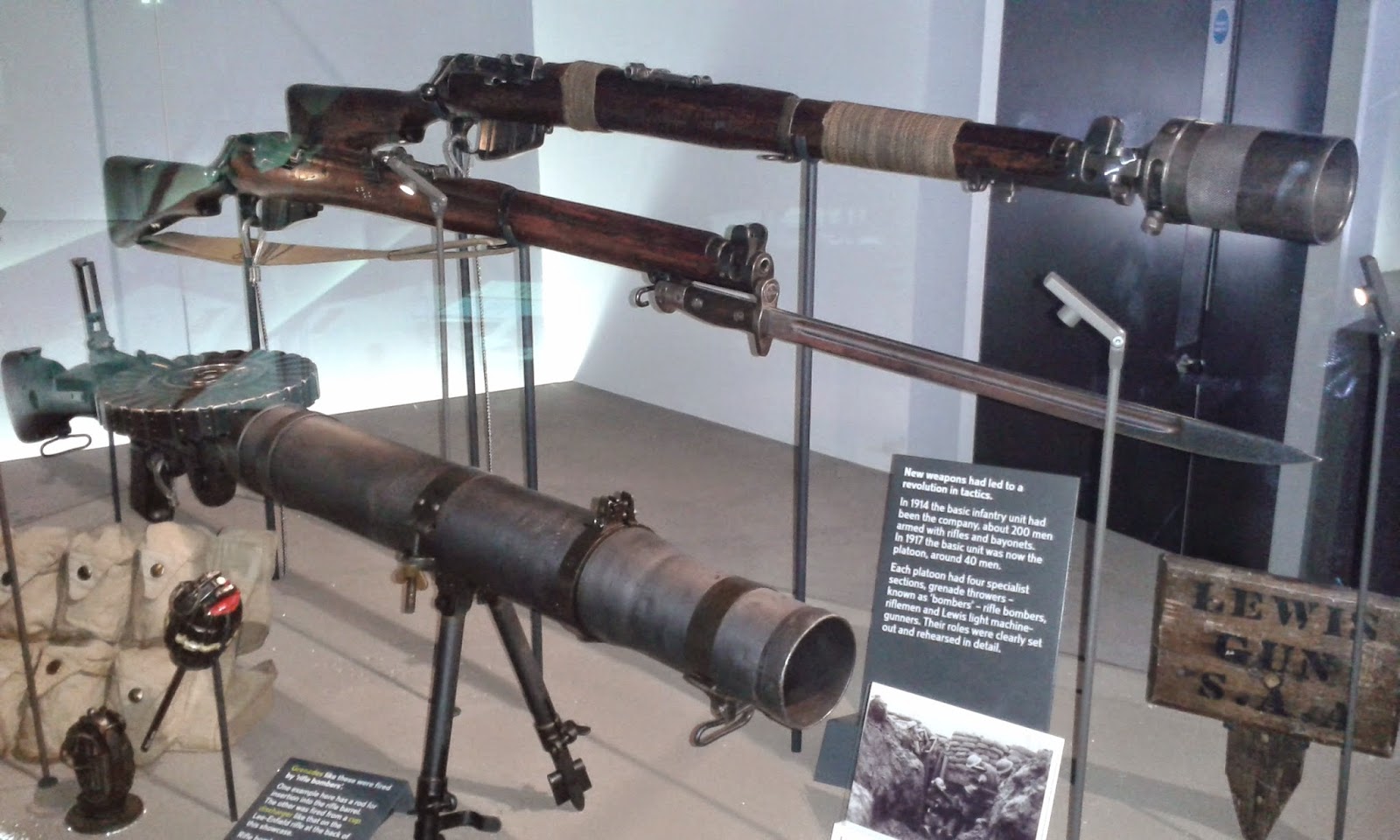 The classic infantry weapon trio. The Lewis Gun, the Lee Enfield and the Rifle Grenade launcher. Look at the information board which is a model of relevance and clarity.

I'd like to have had longer there, but I had to be somewhere else. Be good to go back.

I hope, when the time is right, that they re-do the WW2 exhibits to the same standard.

Yes, definitely one to recommend.
Posted by Trebian at 15:53