Back from the pub & it's Phil's turn to entertain us.

I have written previously about my re-fight of Cannae using DBA 3.0. This was done as part of a DBA 3.0 "Great Battles" project, due for publication early next year. I was roped into the exercise by Phil, who was planning to do a take on the Battle of Yarmak, 636AD for the project.

Yarmak, as you all know, is the decisive six day battle between the Islamic Hordes spreading the word of the Prophet by fire and sword and the Byzantine (or Eastern Roman) Empire. The Islamic forces wins with consequences that are still with us today. Phil is not doing all of the six days but is basing the game on the action that took place on day 5.

Anyway, that's not the big reason to get excited about this game. Phil is putting it on using 30mm flats many of which once belonged to either Phil Barker or Tony Bath. How cool is that!

I'm not a massive fan of the flat aesthetic, I'm afraid, but this is a piece of history. And Phil very cleverly deployed the armies at a slight angle so the players could see the figures obliquely rather than just having a whole array of edges in front of them. 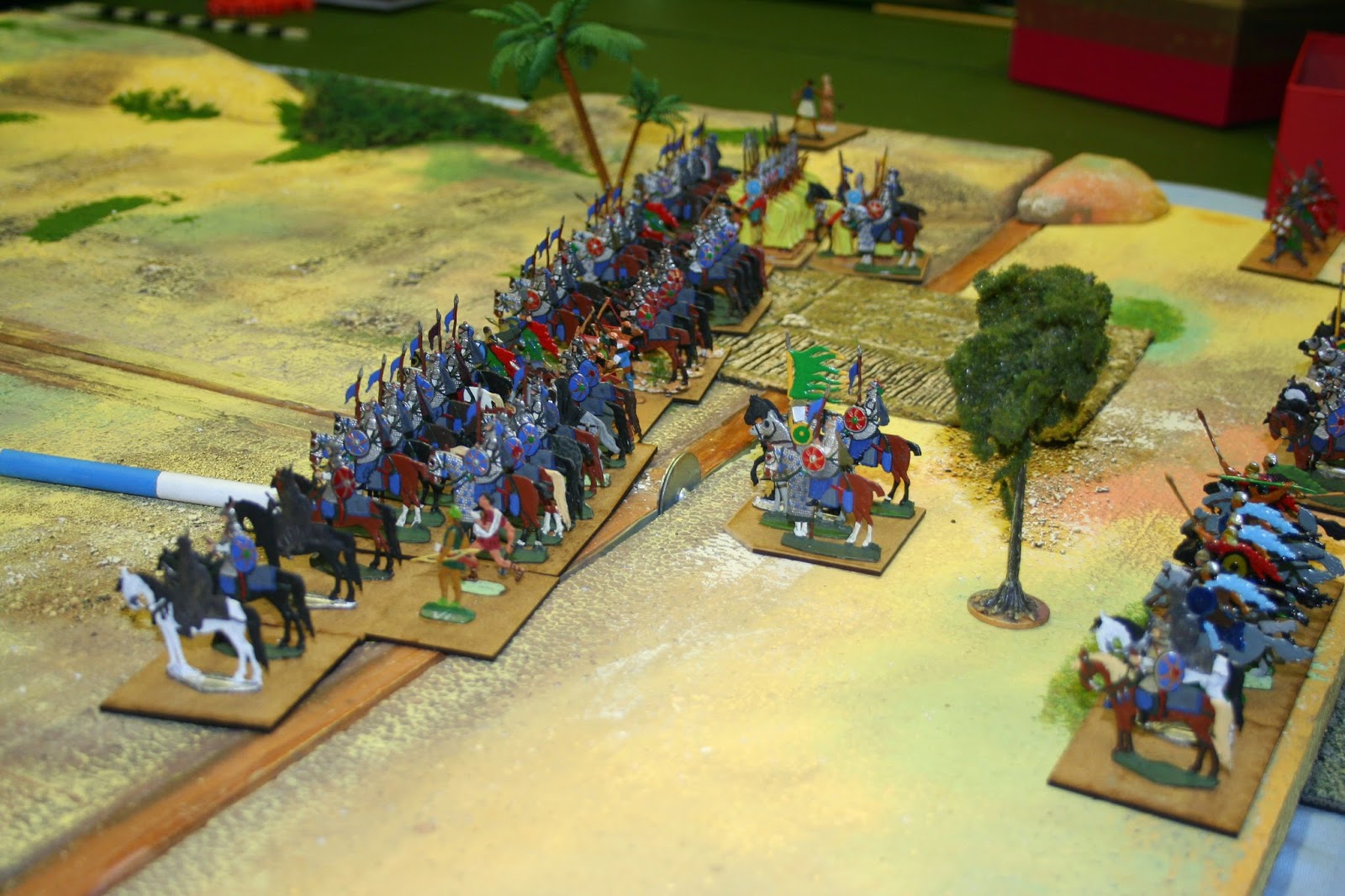 Phil & I took the Byzantine army (which he informed us was mostly Armenians and Arabs) and Richard and Chris took the Islamic Army. I was facing off against Chris. This is never good. He is really adept at creating several of those "kill" situations regularly every turn whereas I'm usually lucky to get two or three in the whole game. As you can see in the above picture the massed lines of cavalry create a pleasing "3D" effect. 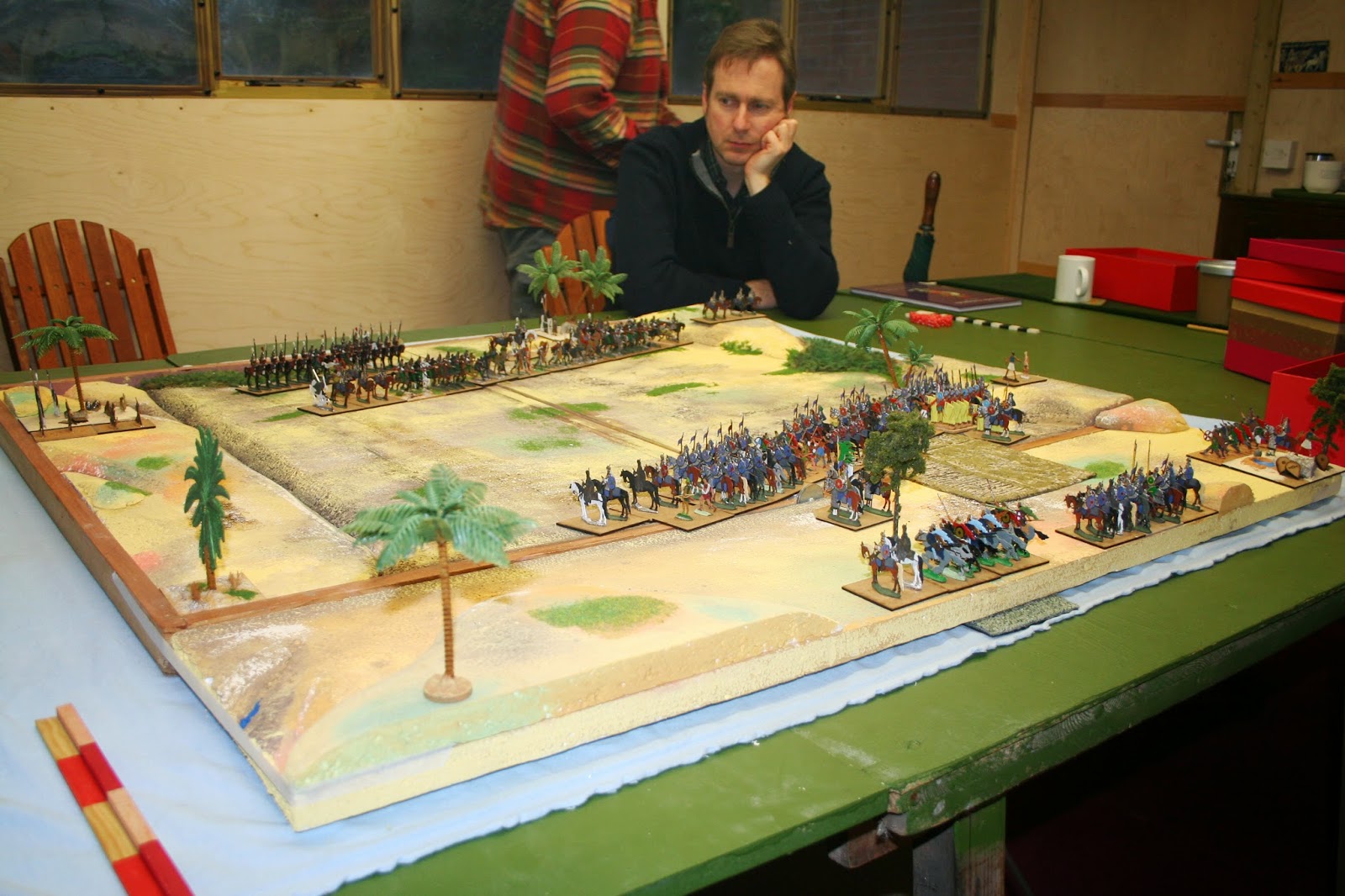 My forces are on the left hand side of the line. We have one camp, - in Phil's corner - and they have two, one in each of their corners. 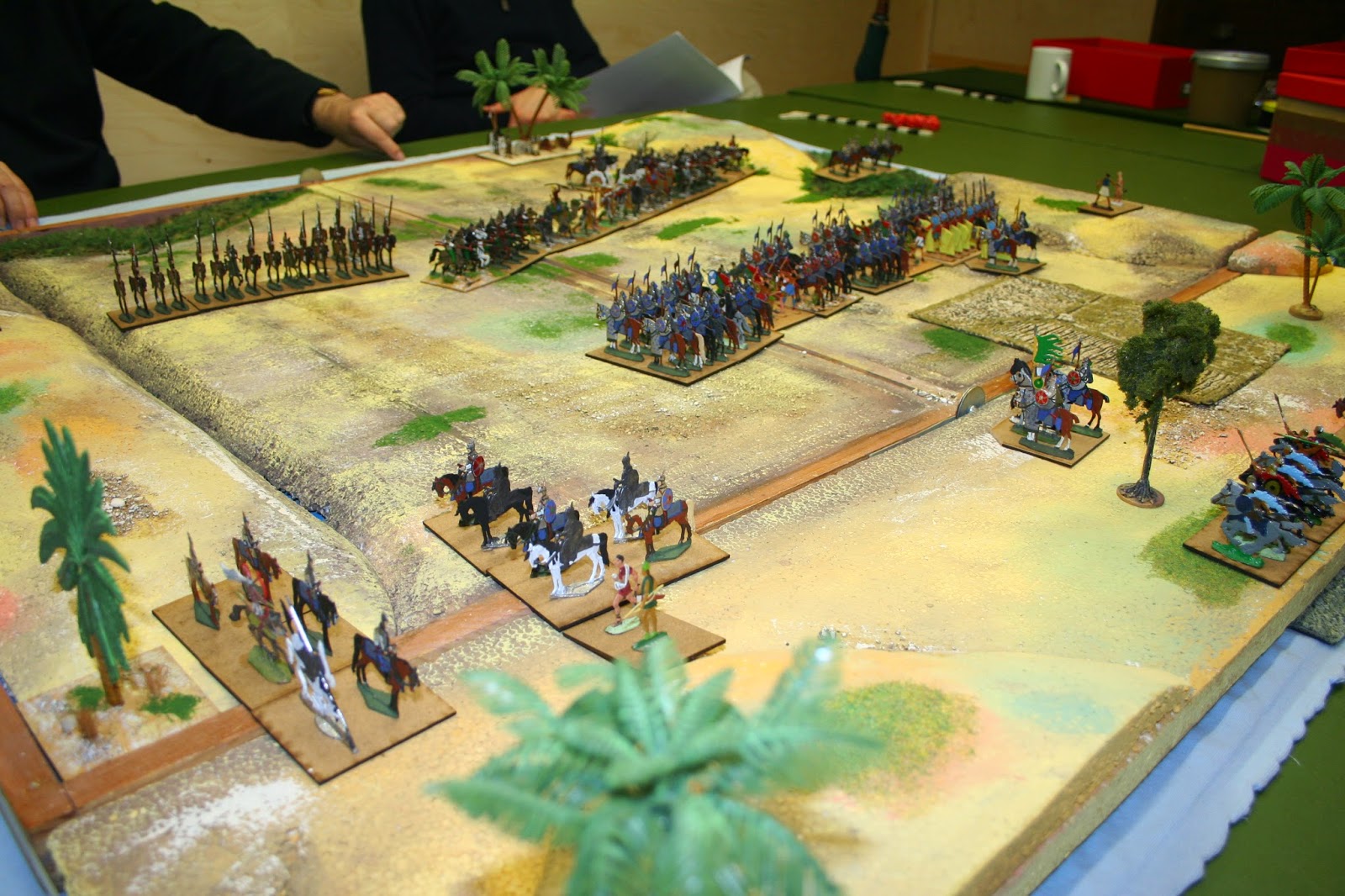 The Islamicists have the ability to switch PIP dice between the players. We are stuck with who gets the highest once we've chosen on turn 1 (it was me, but then I was facing Chris). Chris immediately got his light horse into a column and tried to turn my left flank. I hastily assembled a light division to see him off. In the middle the main lines trundled towards each other, Chris bringing up his reserves to exploit my internal flank.

Part of the problem for the Byzantines is they have some two deep units. These are great against blades, but otherwise they reduce your frontage and cost more when they get killed. As this is mainly a cavalry battle they aren't your go-to troop type. 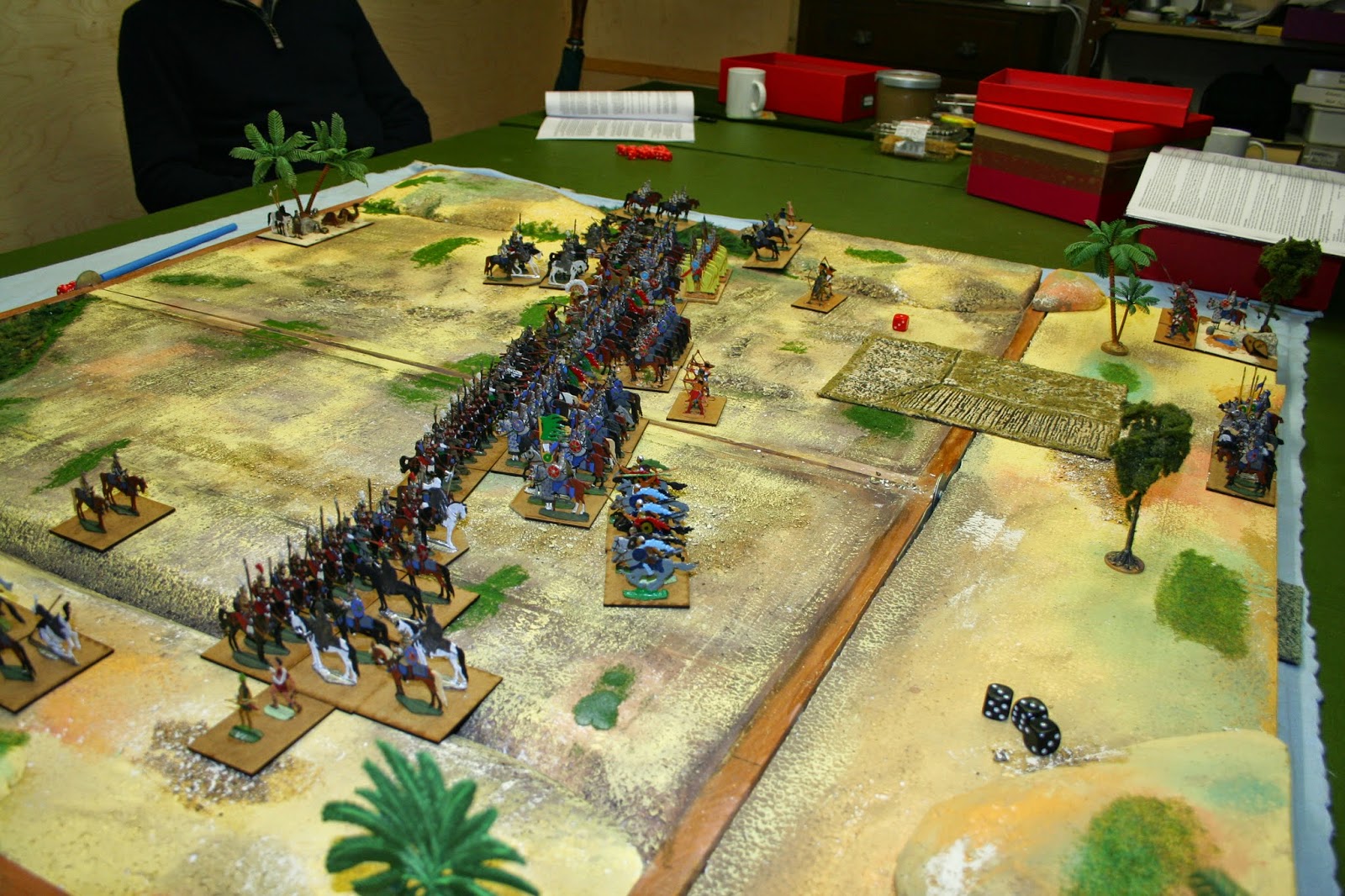 My light division saw off the flanking move, but I was forced to use it to prop up the end of my line to stop it getting turned whilst I brought up my reserves. I have no idea what was going on on Phil's side of the table. 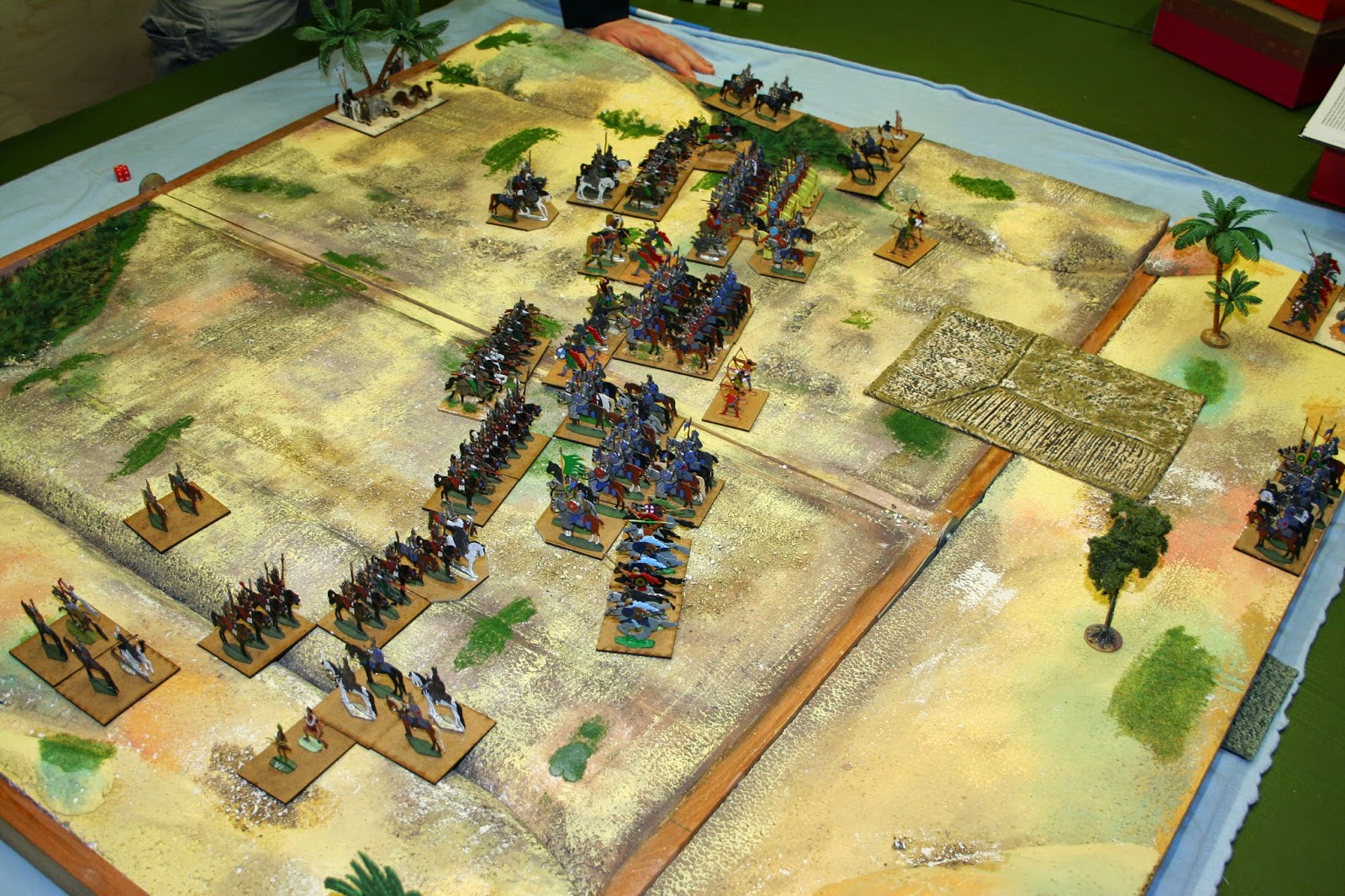 I had a shocker in the first round of combat and didn't roll above a 3. 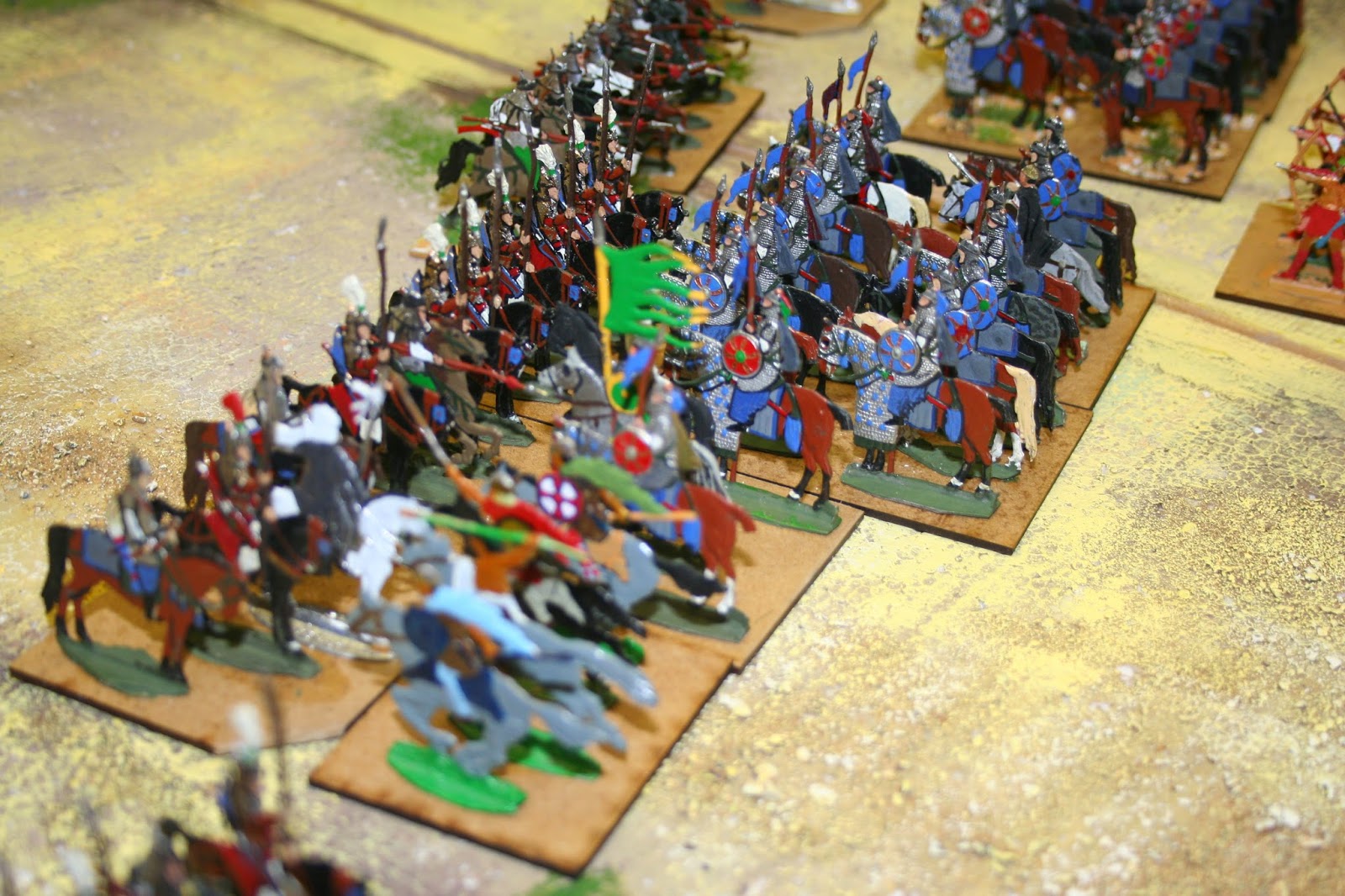 Whatever. It still looks great even tho' the figures aren't finished. 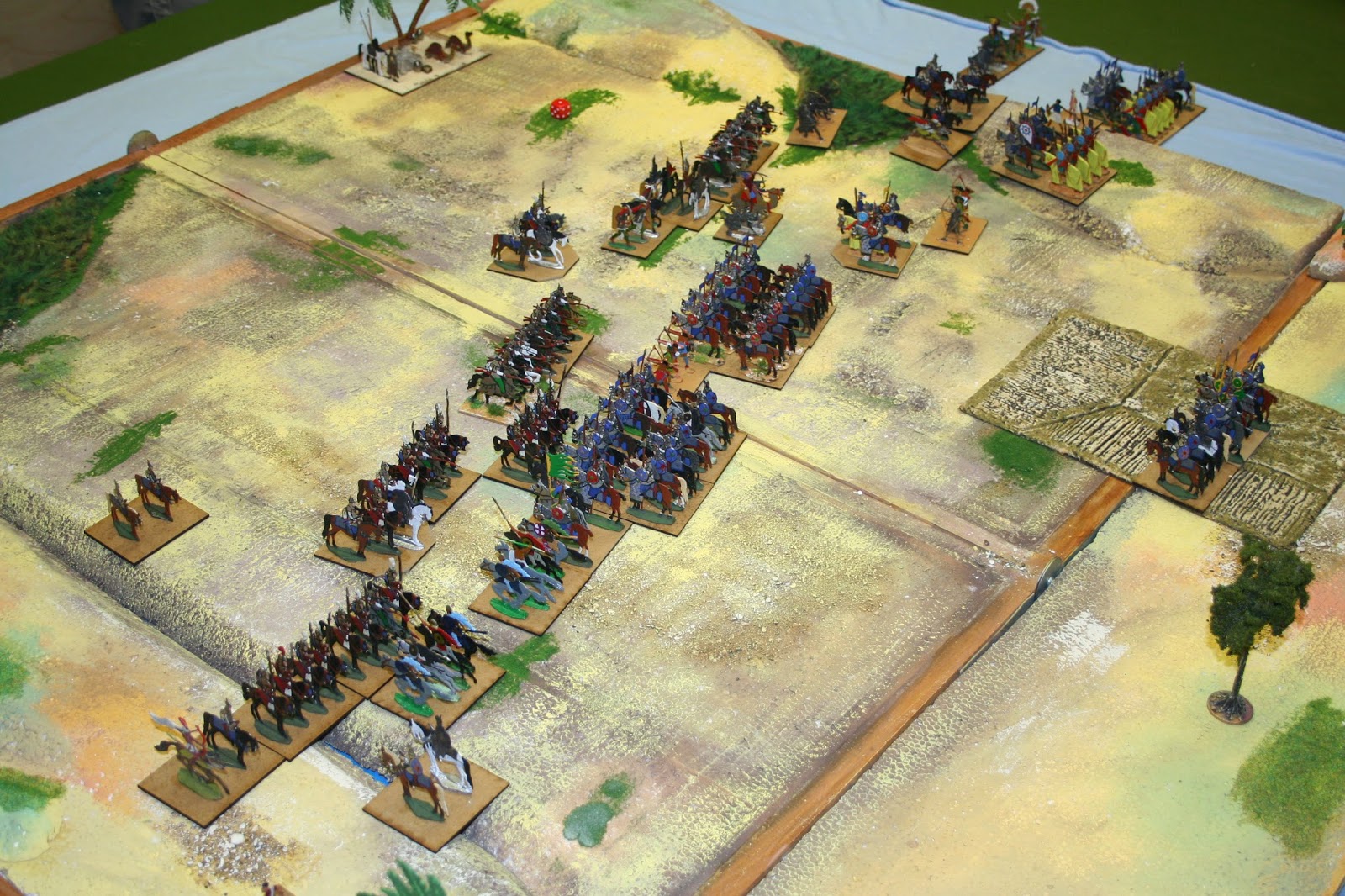 Another round of terrible rolls meant I was soon three elements down having inflicted no hits. My light division was down to a single base. On the positive side I'd got my reserves into line and stabilised the position. Phil had taken a hammering as well, losing one of his double elements. Two more down and his command was demoralised. 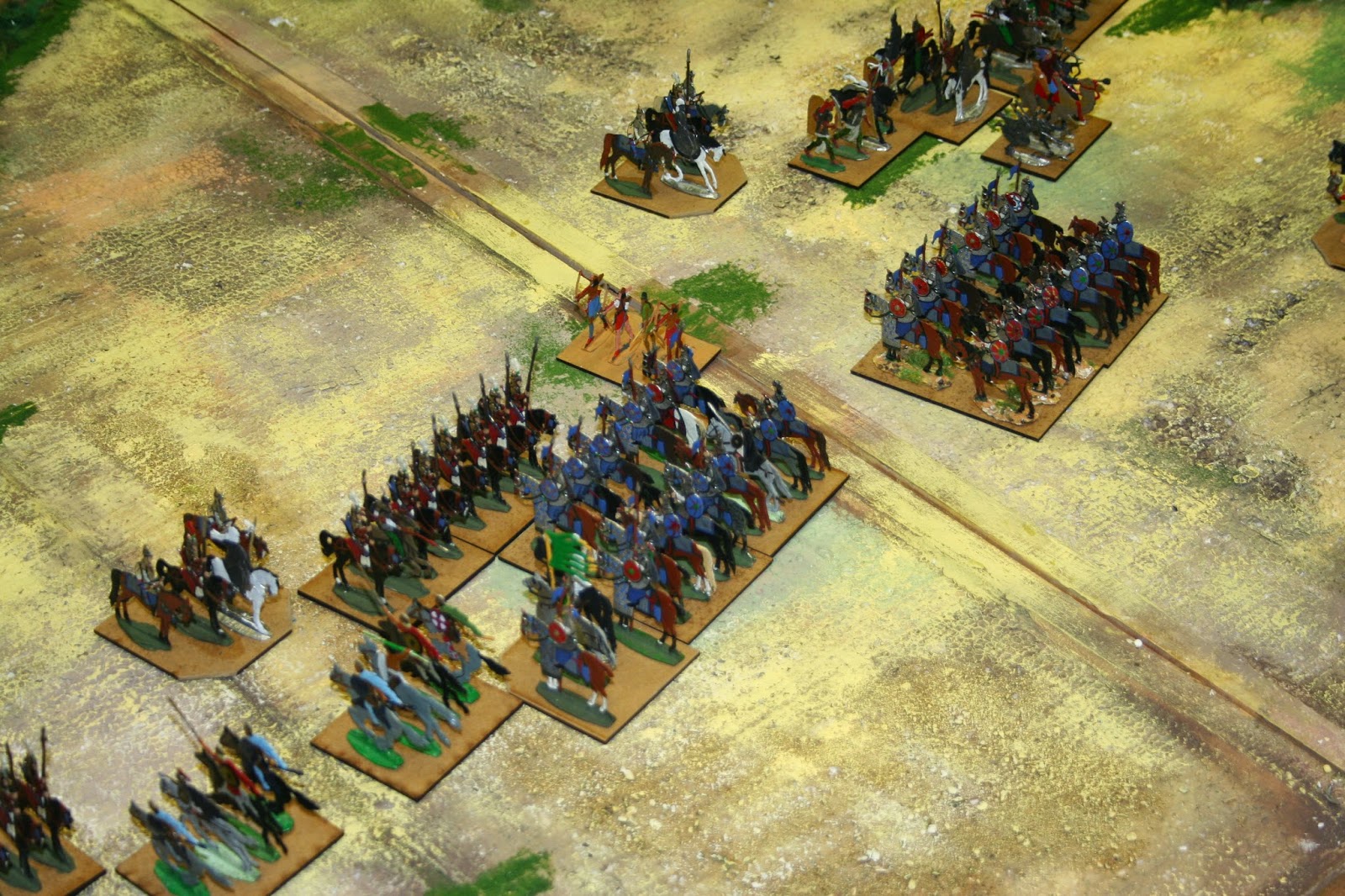 A few liucky die rolls and I've got my blades through the middle and flanking the enemy line. At this point, however, I lost another base so I was demoralised and we had lost.

Phil & I thought it would be a good idea to play on as I'd only lost a few light troops and most of my heavy stuff was still okay. Plus we had the time to do it. Chris pointed out that if he'd known that he'd have played his previous turn a bit differently, as some of his troops were more epxosed on the basis that he wouldn't have to fight any more. 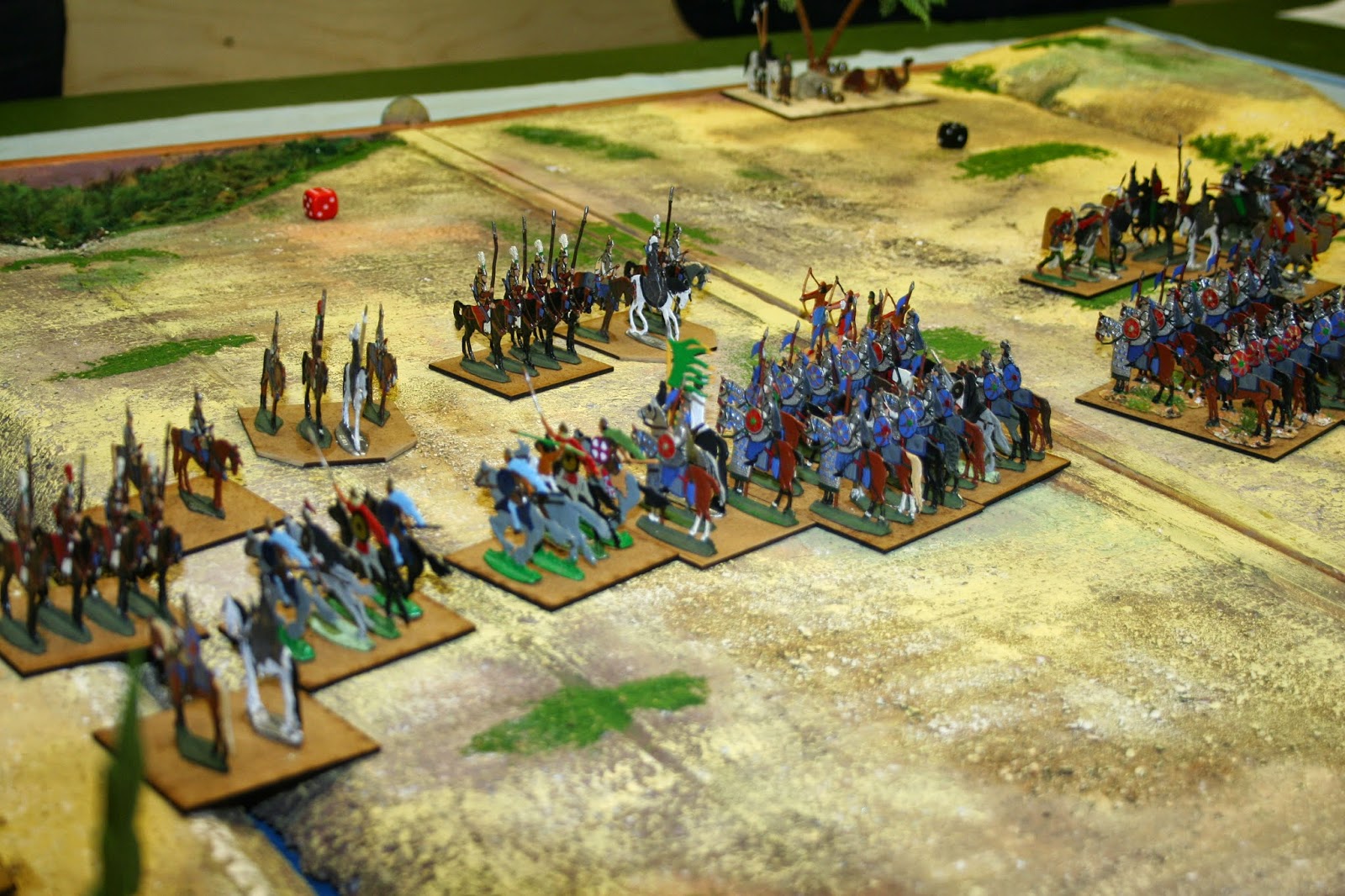 I hammered forward and my luck changed. Regardless of how he was set up I just out rolled him and got a few doubles, eliminating units straight off. 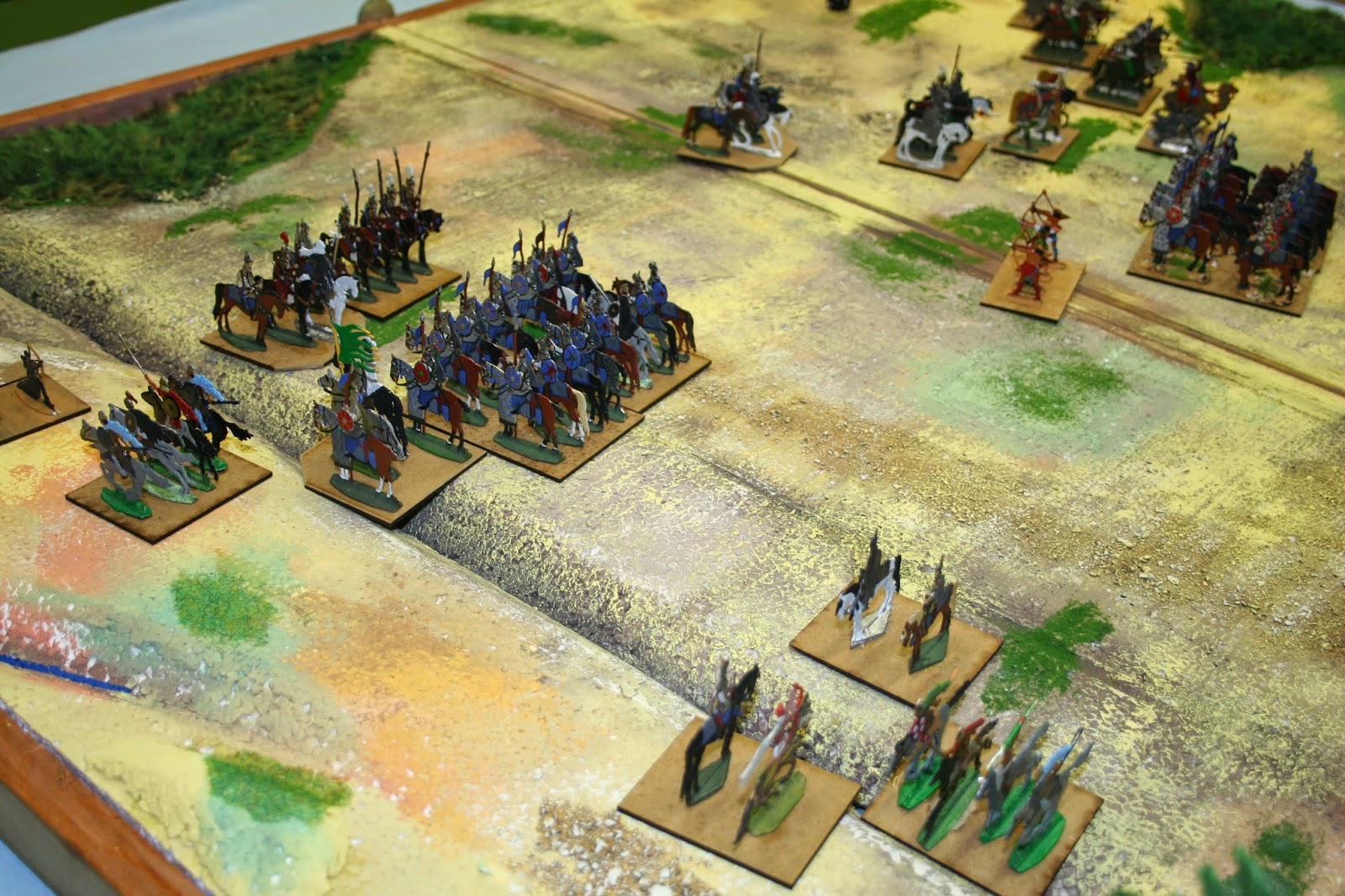 Before you know it I'm bearing down on his remaining forces and camp and no amount of clever manoeuvres are going to help. 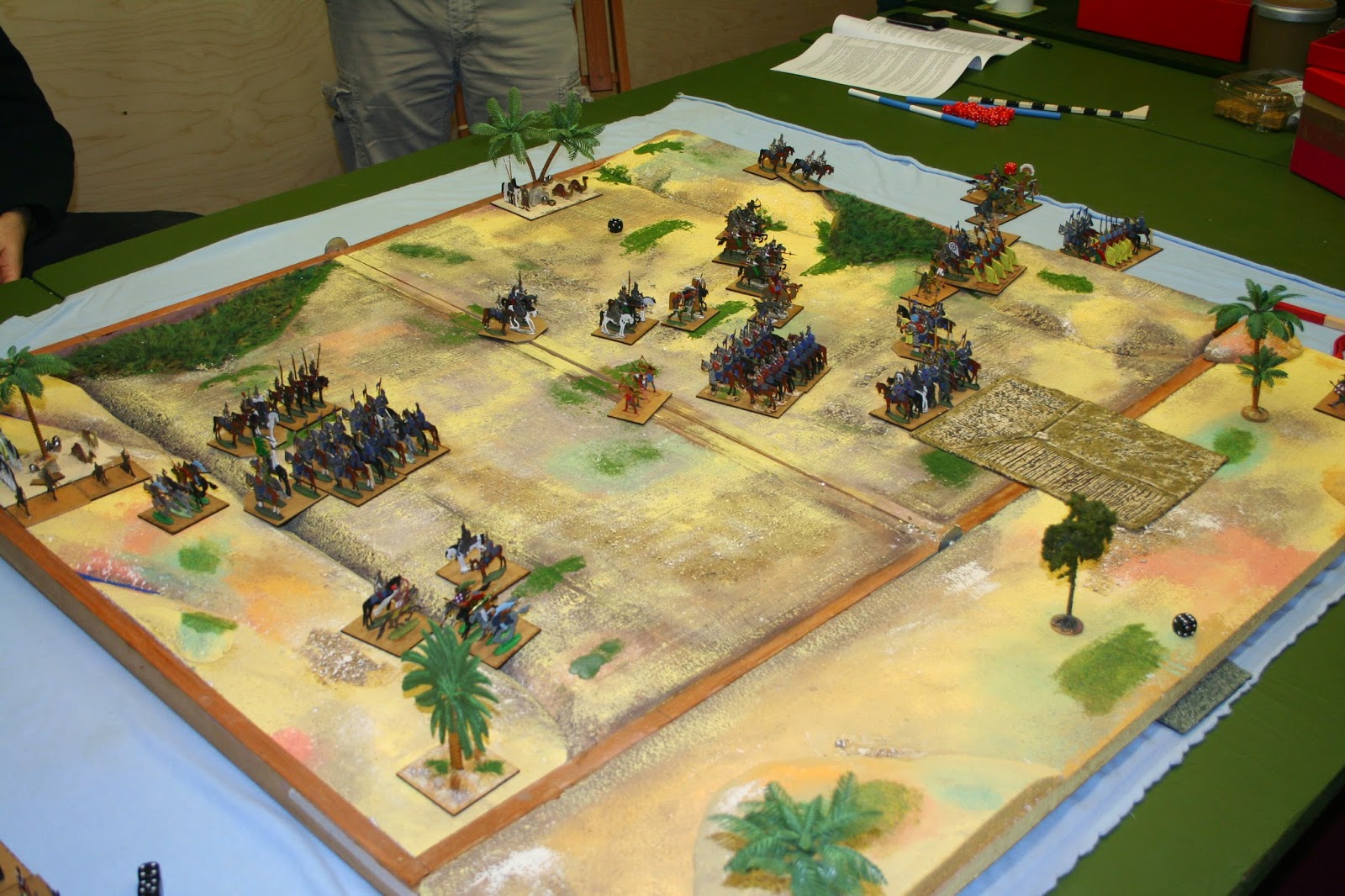 And so the game ended. Phil had managed to drag things back on his flank, and the Byzantines were claiming victory.

Phil has some scenario design issues to deal with and is probably in need of some special rules. The one special rule he did have , - a one off rule that allowed a Cav unit to move like LH - was not used as Chris was okay doing things the old fashioned way.

Unlike Cannae I had no conception of how this should pan out. Phil will have his own ideas about how he wants this to run and so has some thinking to do.

Lots of fun and quite challenging as well. Those flats will look great when they're finished and playing with a real bit of wargaming history is a notable thing in itself.

I'll be sticking with my round figures, however.