Our final games feature of the day was provided by Chris. He brought Neil Thomas' "One Hour Wargames" and his Prusso-Danish War figures along (we didn't know he had them either).

The rules in the book are very simple and it relies on the scenarios being challenging to make the game. The book has a lot of scenarios in it. 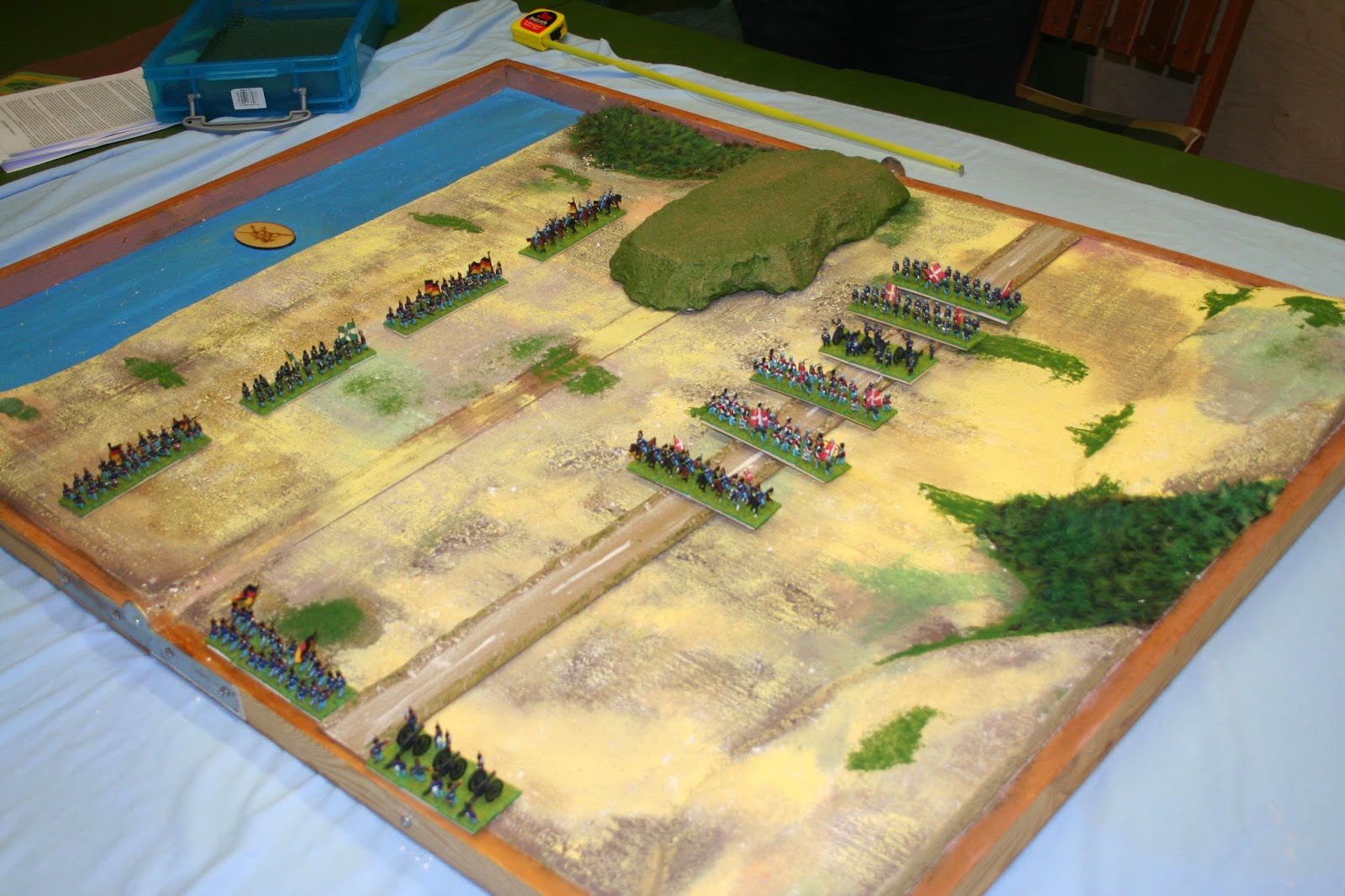 In this game the Danes are advancing down the road and the Prussians are trying to stop him. The terrain for this game was the recently harvested wheat fields of Denmark and nothing to do with the sandy desert of Syria. 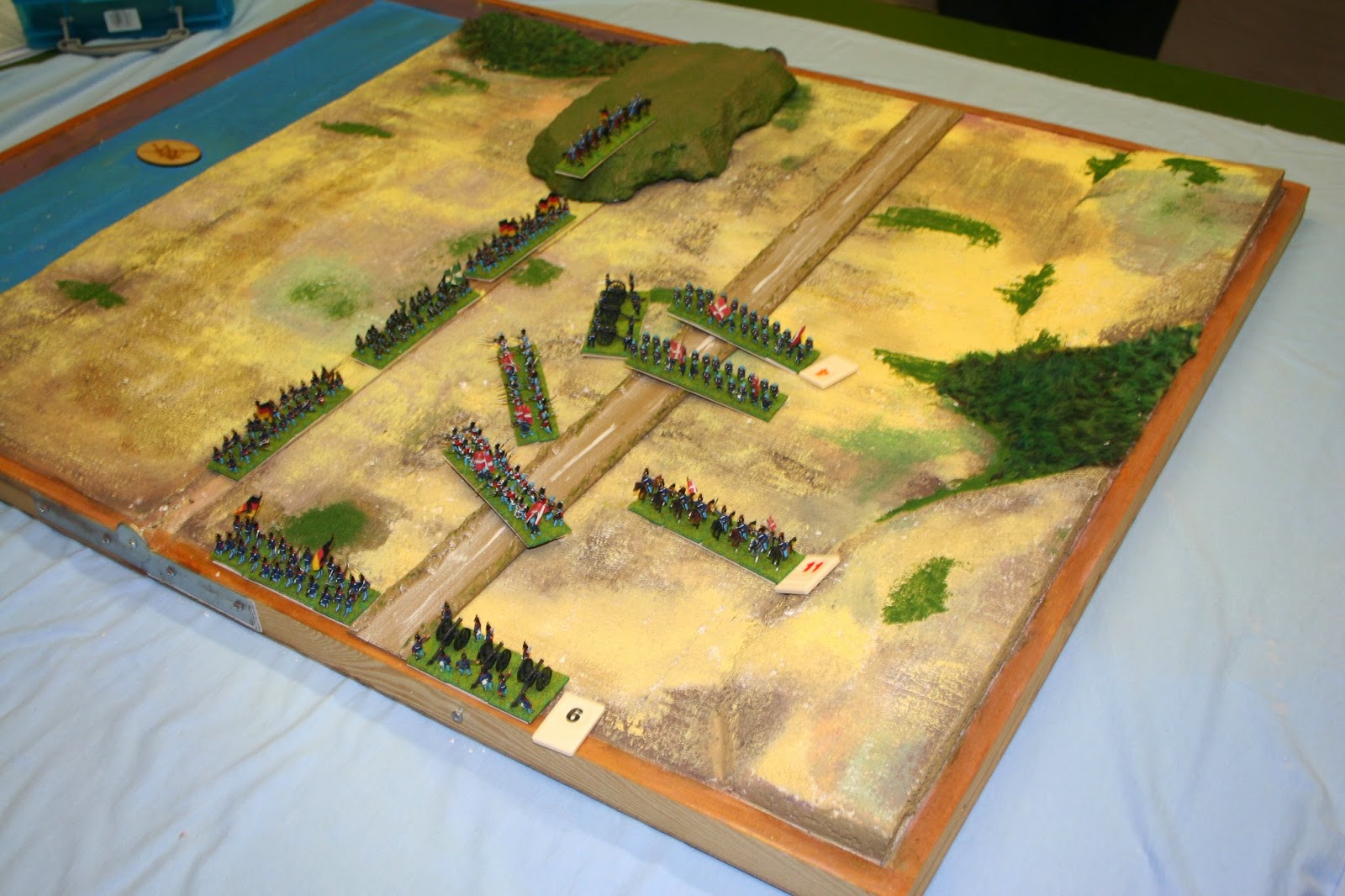 The Danes had to exit the board with three units. The Prussians caught them in a cross fire (I missed the start of the game as I was making tea/coffee and getting cakes & sausage rolls so I'm not clear exactly what was happening). The system has simple die roll = hits methodology, with units taking 15 hits before destruction. We used Rummikub tiles to record the number of hits. They go up to 13 & have a "Joker" tile you can use for 14 if needed. 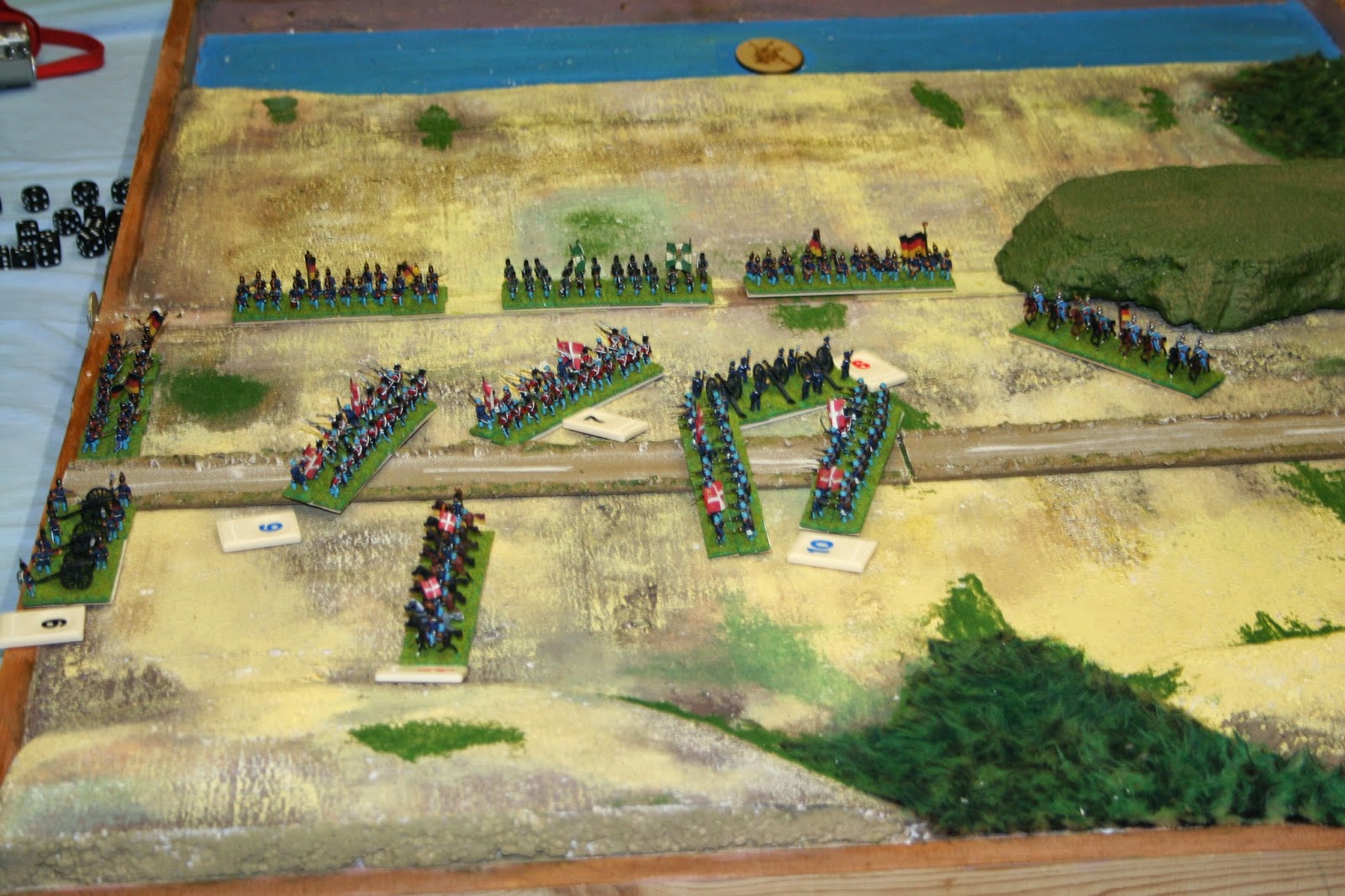 The Danish cavalry repeatedly charged the Prussian guns and suffered accordingly. The infantry fire fight was loaded in favour of the Prussians as well. due to their flanking position. Perhaps we hadn't set this up right or we could have been guilty of tired tactics after a long day. 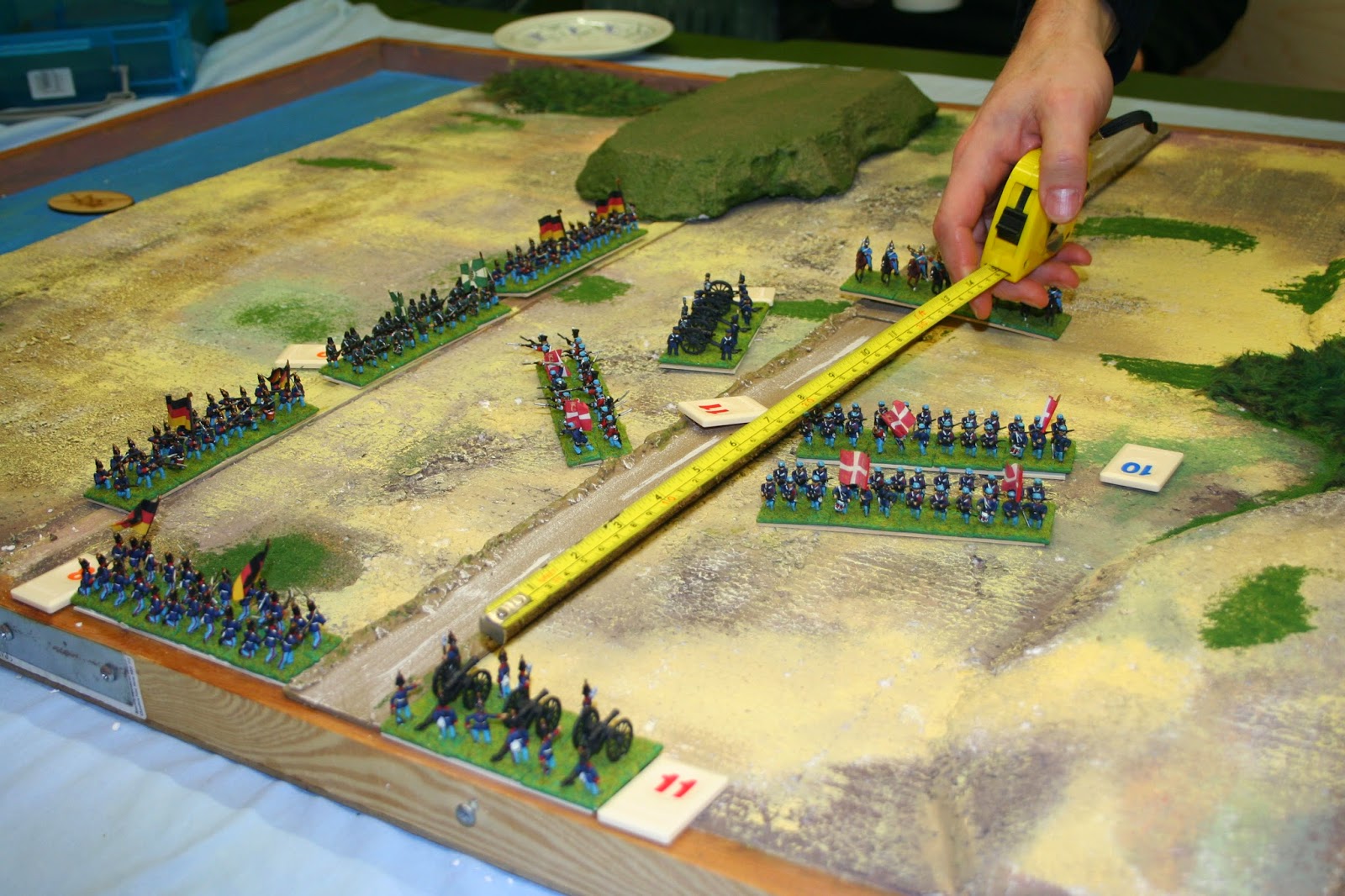 However, having reduced the artillery to 4 hits remaining, perhaps the Danes could force their way off. 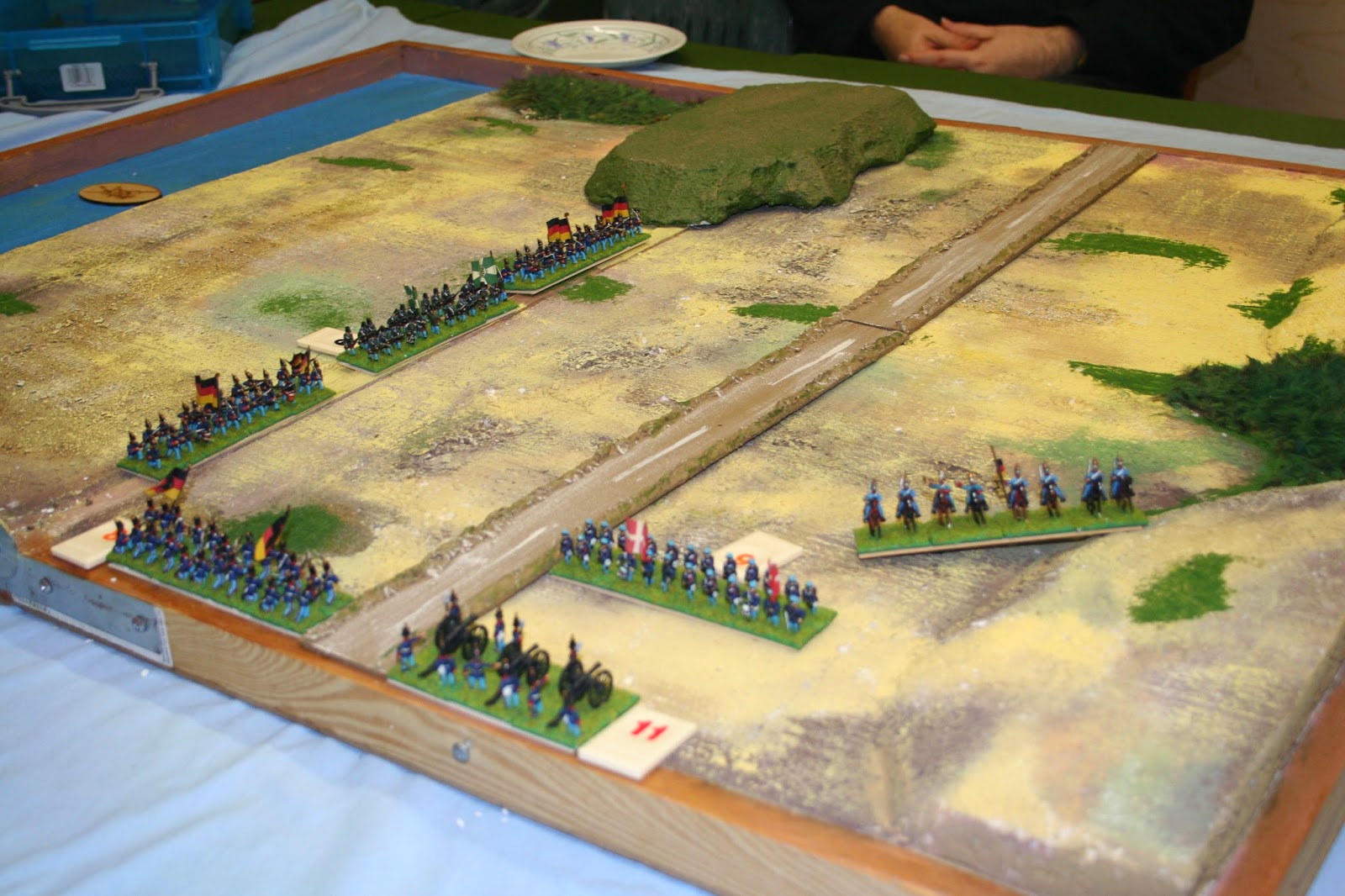 Alas Prussian musketry proved too much. 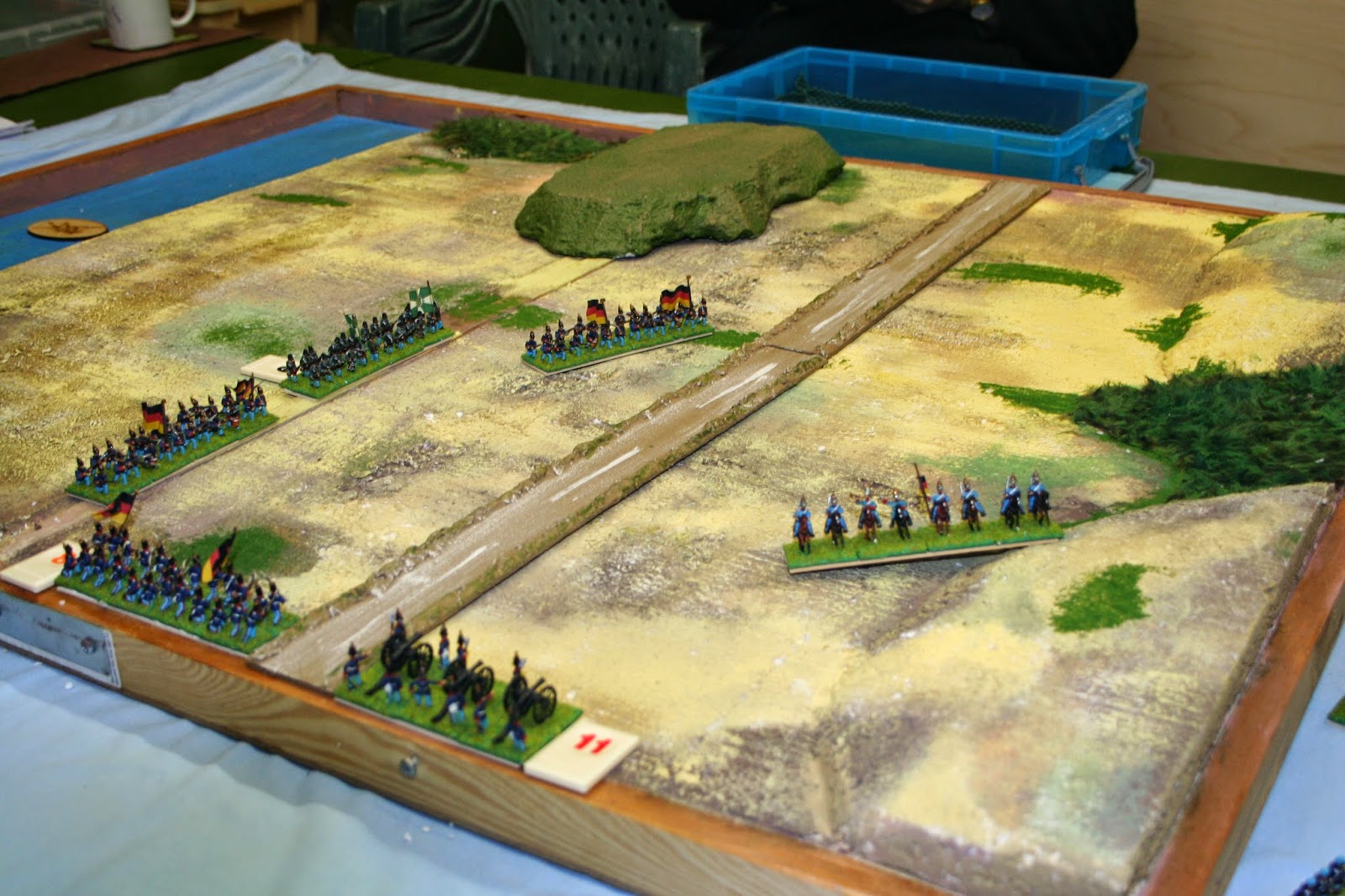 And then it was all over. It took us about 15 minutes, so the challenge with the game seems to be to stretch it to an hour, not squeeze it down to one.

The rules are really, really simple, even for Neil Thomas. The game is based around interesting scenarios, so it needs more tries. I can see that the rules would have further utility for really large games with lots of players. They're quick, unambiguous and don't seem to need umpire intervention.

Anyway, to summarise it was a good way to round off the day and could be played comfortably whilst eating and drinking. I think we'll be seeing them again.

I shall probably seek out a copy of the book sometime in the future.
Posted by Trebian at 10:57