So Phil has until the end of December to get his battle report off to the DBA 3.0 Great Battles project. I therefore thought it would be helpful for him to have another run at it in Shedquarters, so it provided the second half of our pre-Christmas game afternoon.

On this occasion I swapped sides and got the "Arabs", whilst Will got the Byzantines. As with the previous game of the day I partnered Chris & Will teamed up with Phil. 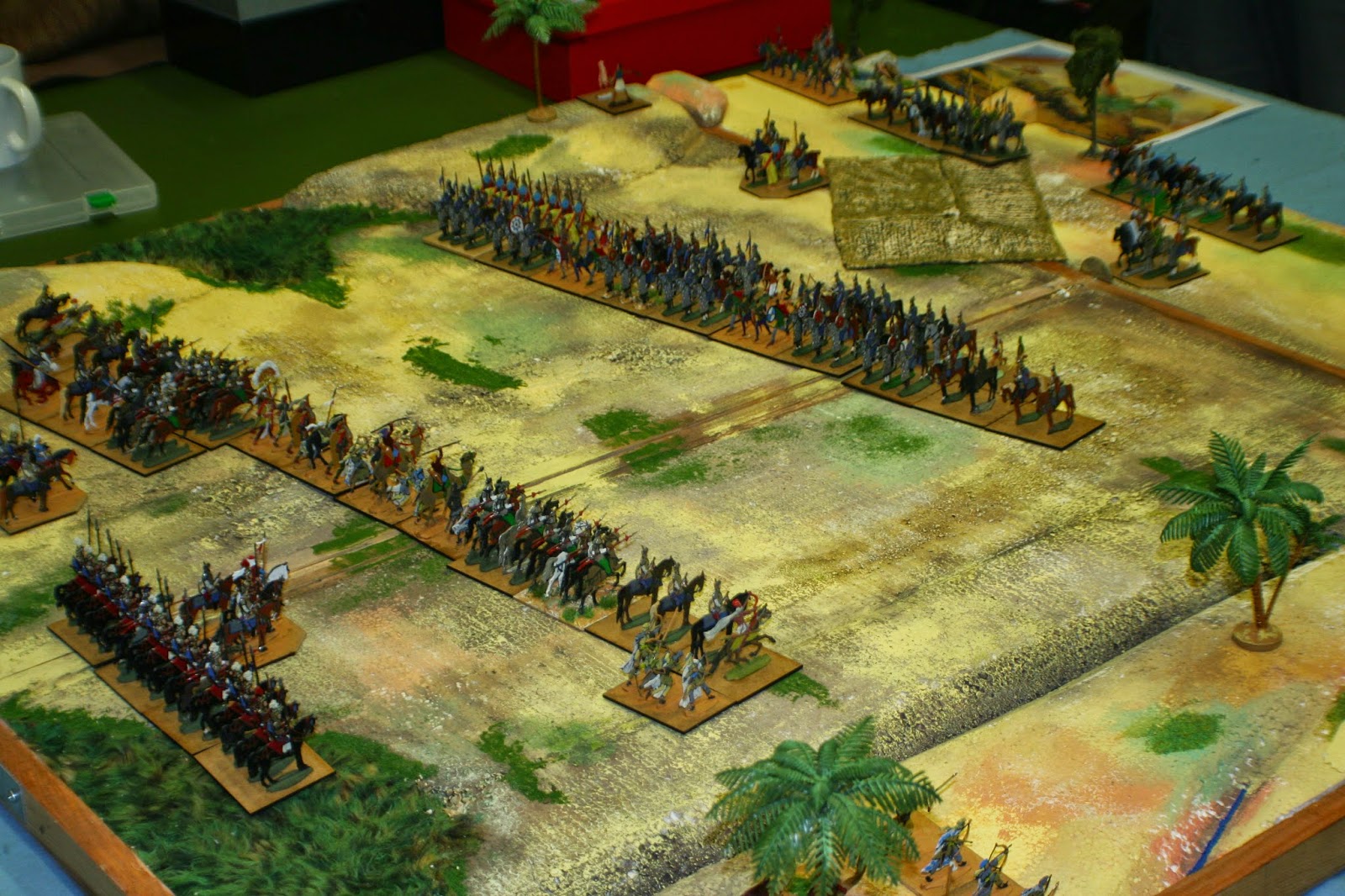 The Islamic forces are on the left, with the Byzantines on the right. After the initial game Phil reckoned that the best way of simulating the Arabs' greater pre-battle speed and manoeuvrability was to allow them an effective "landing" on the flank if they wanted it. 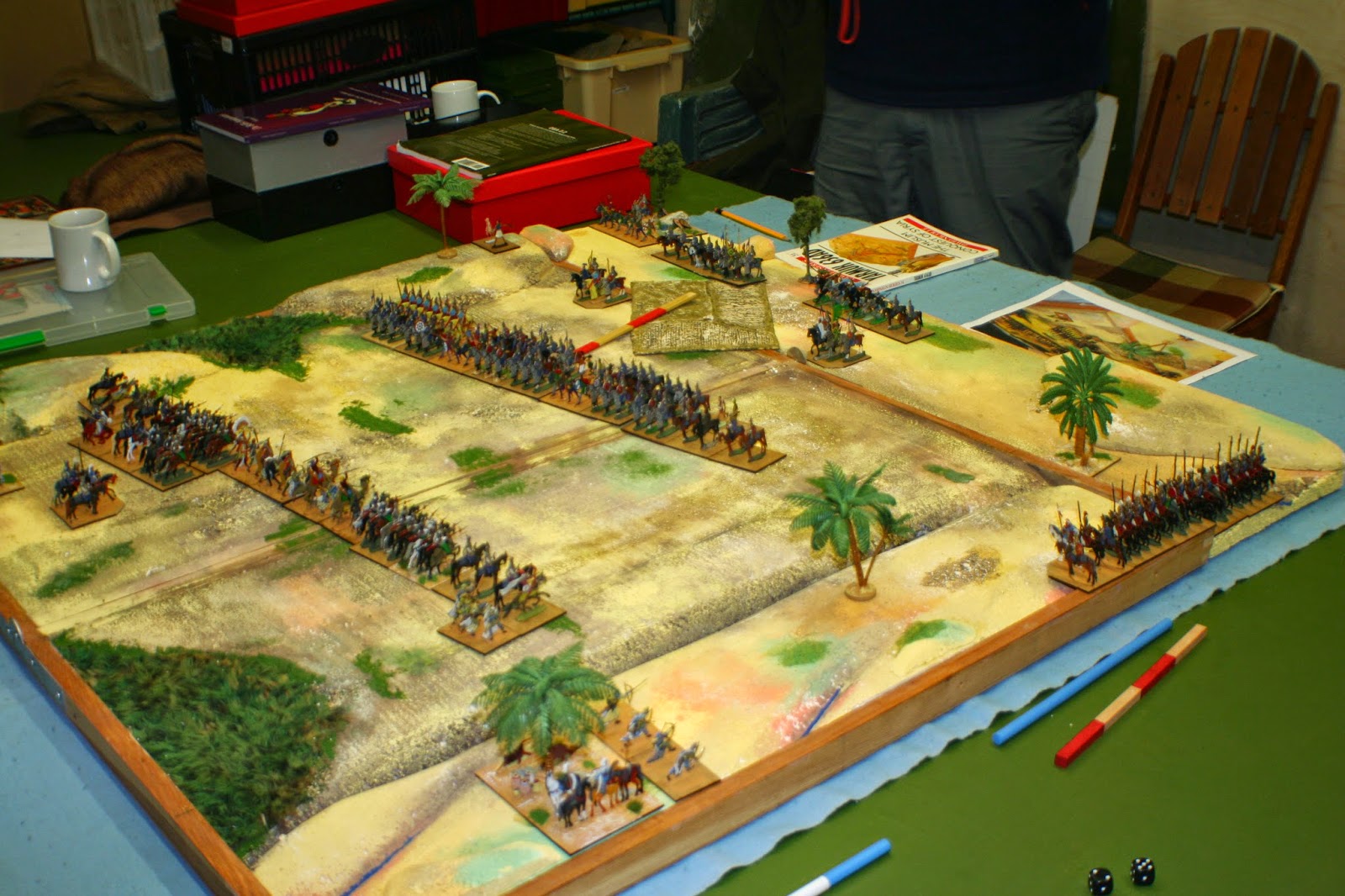 I did. Want it, that is. So I switched a whole load of heavy cavalry and my General out on to the Byzantine left flank, as you can see. 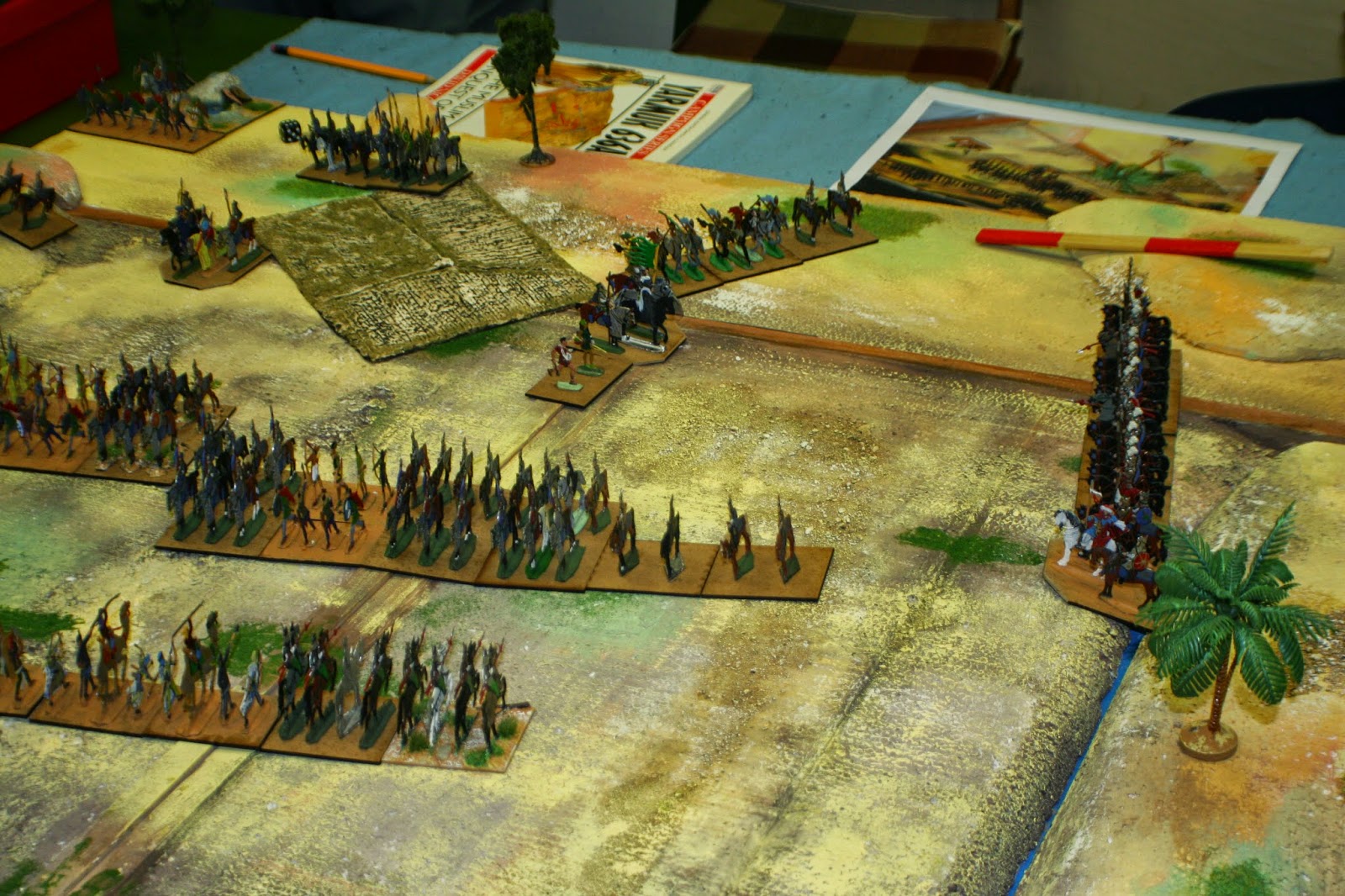 Taking the first move we swept on towards our opponents. I misjudged the opening turn or two and accordingly lost two LH units against similar opponents in what can be termed a "crapshoot". This was careless, as it meant my half of the army was already half way to being demoralised under the Big Battle DBA rules, and my flanking force was in danger of being outnumbered and overwhelmed. 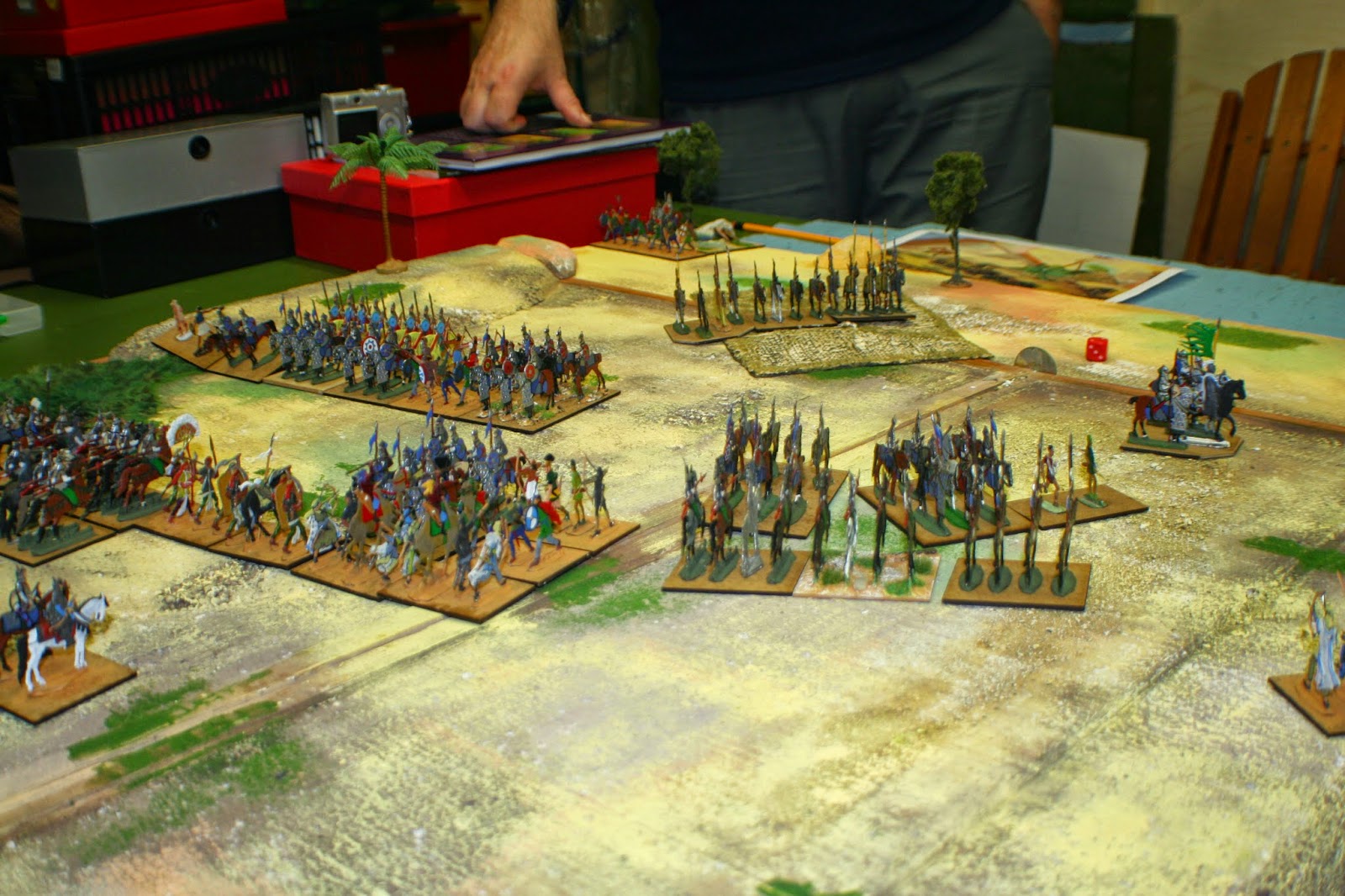 The battle on my flank resolved into a confused cavalry melee against heavier knights, and I was soon bested down to demoralised state, and was forced to hold or retire. 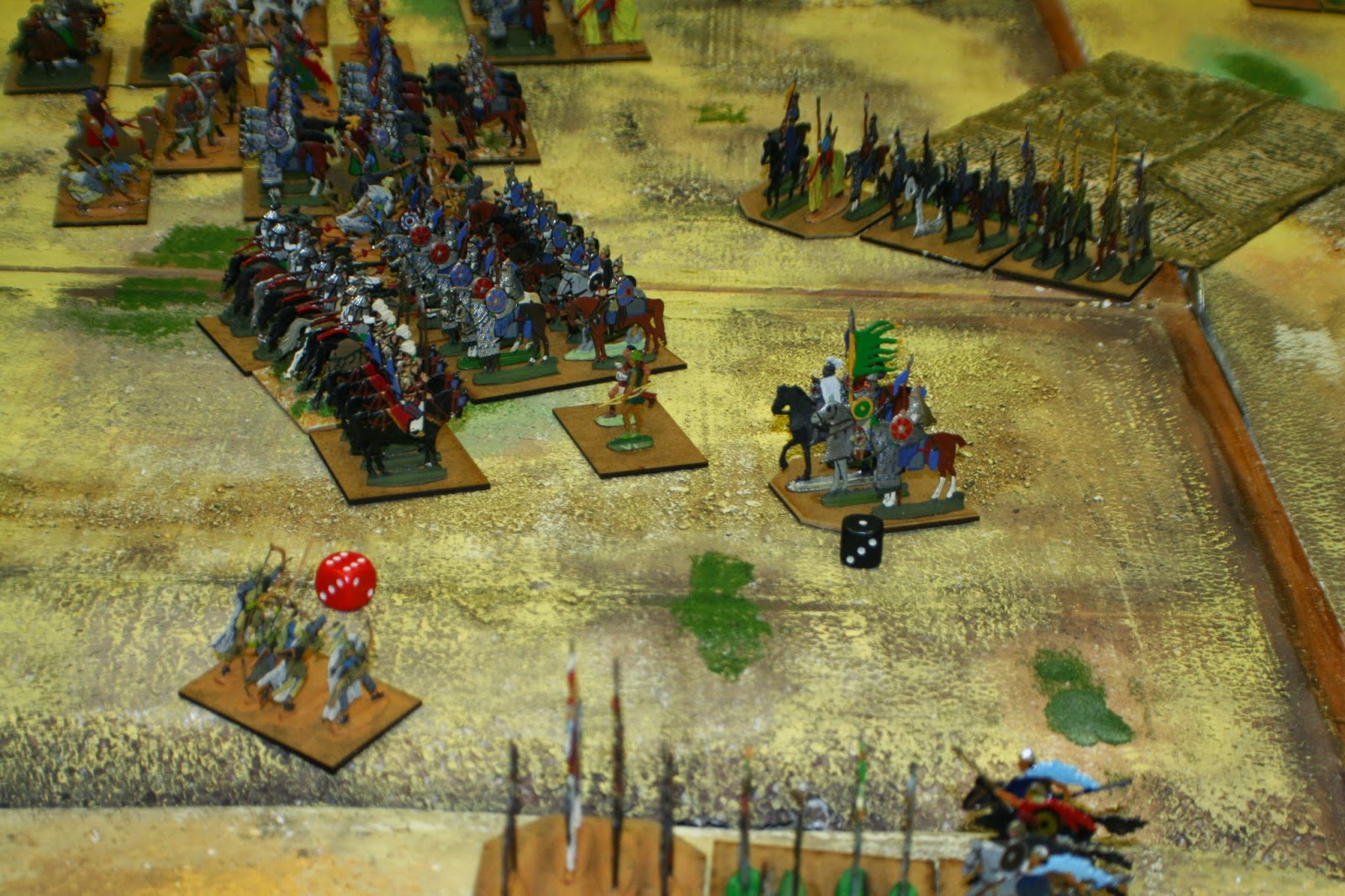 Luckily some keen shooting by my solitary archer unit soon evened things up (they are not affected by the demoralisation modifier when shooting). 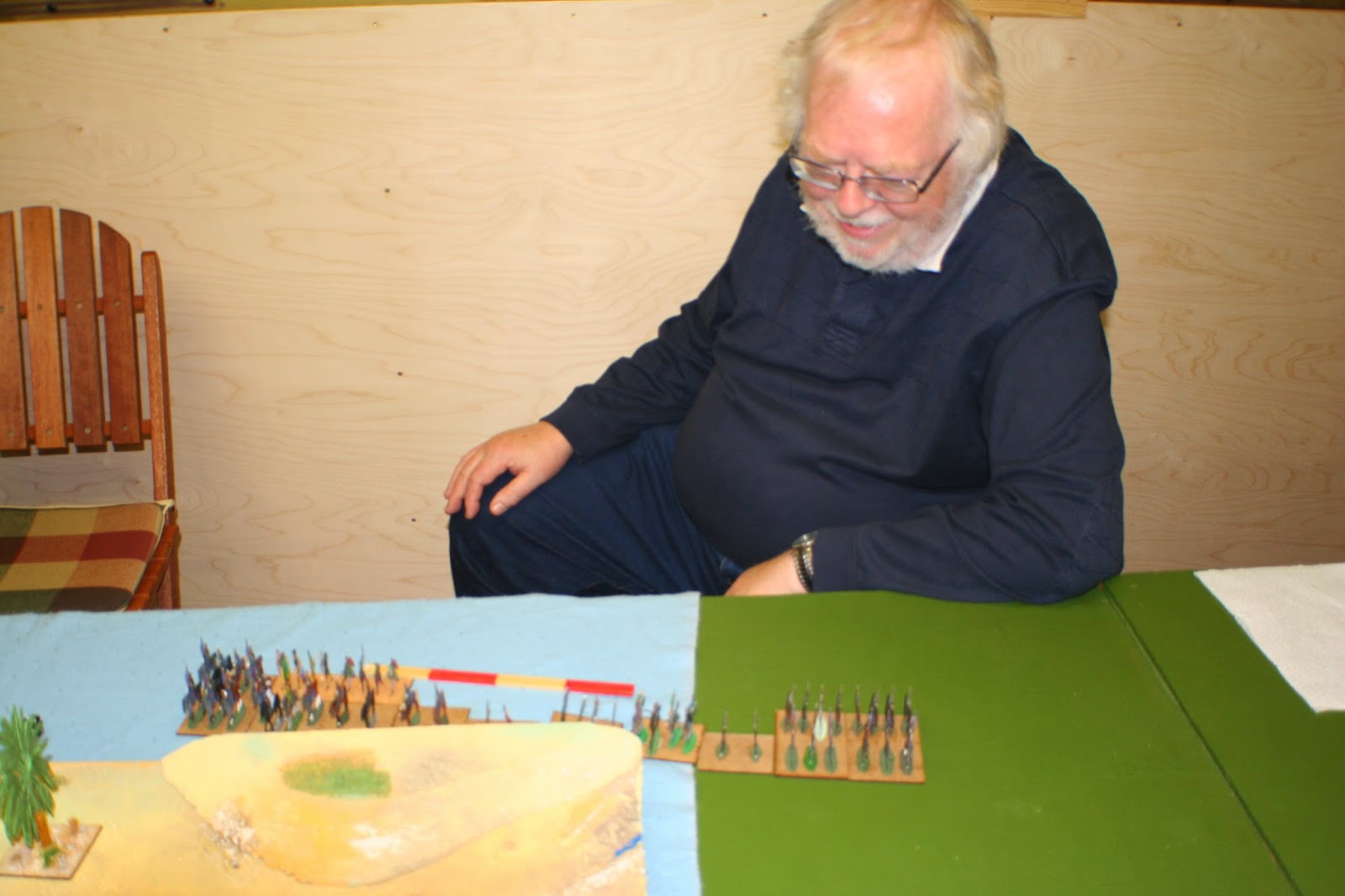 Will was soon gazing despondently at his casualty pile, and also the remains of his army which had fled. I was still holding in position, protecting my companion's flank. 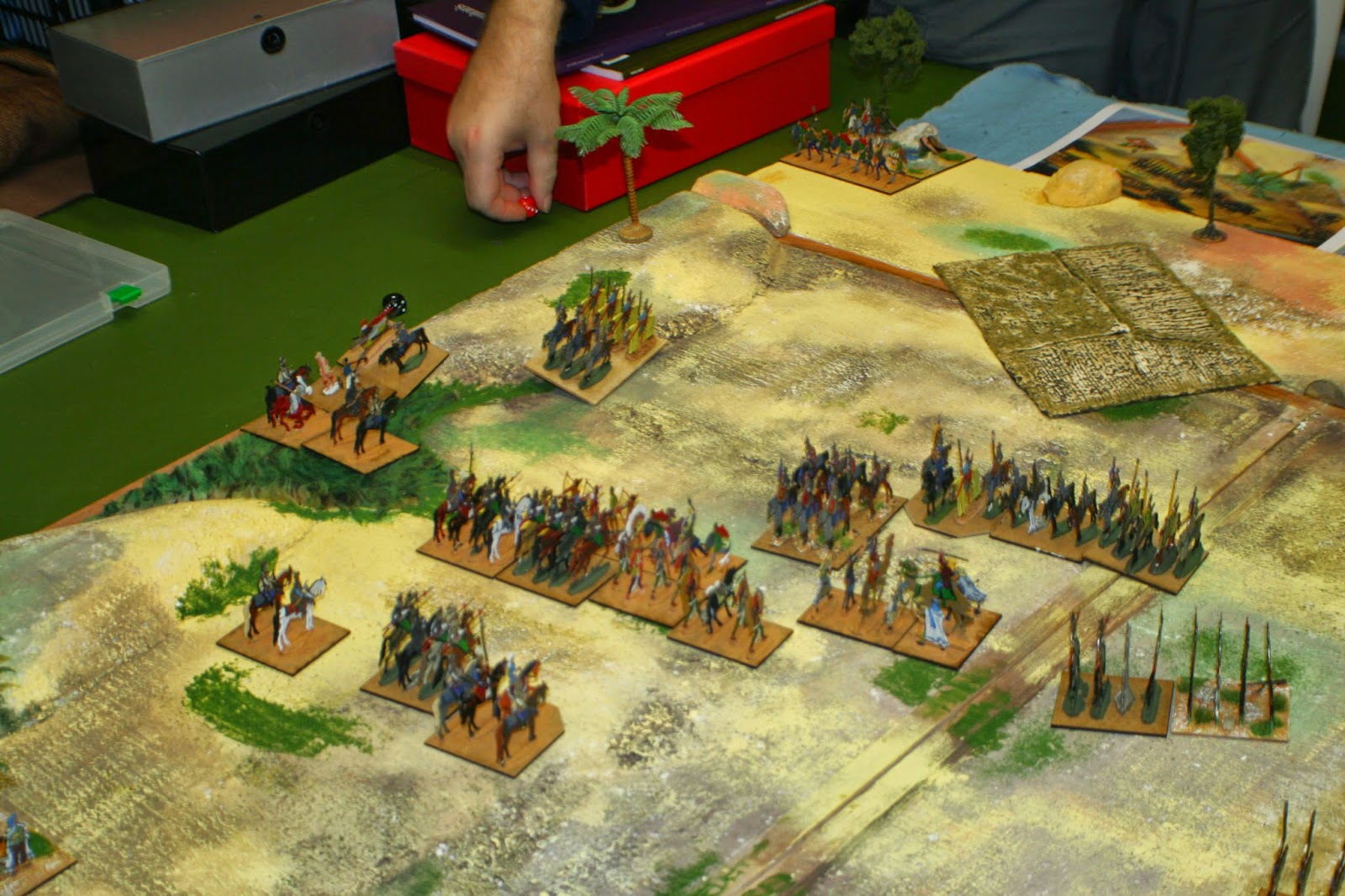 The other flank was more confused. Phil & Chris are much more experienced as DBA players, and so the tactics were accordingly more sophisticated. 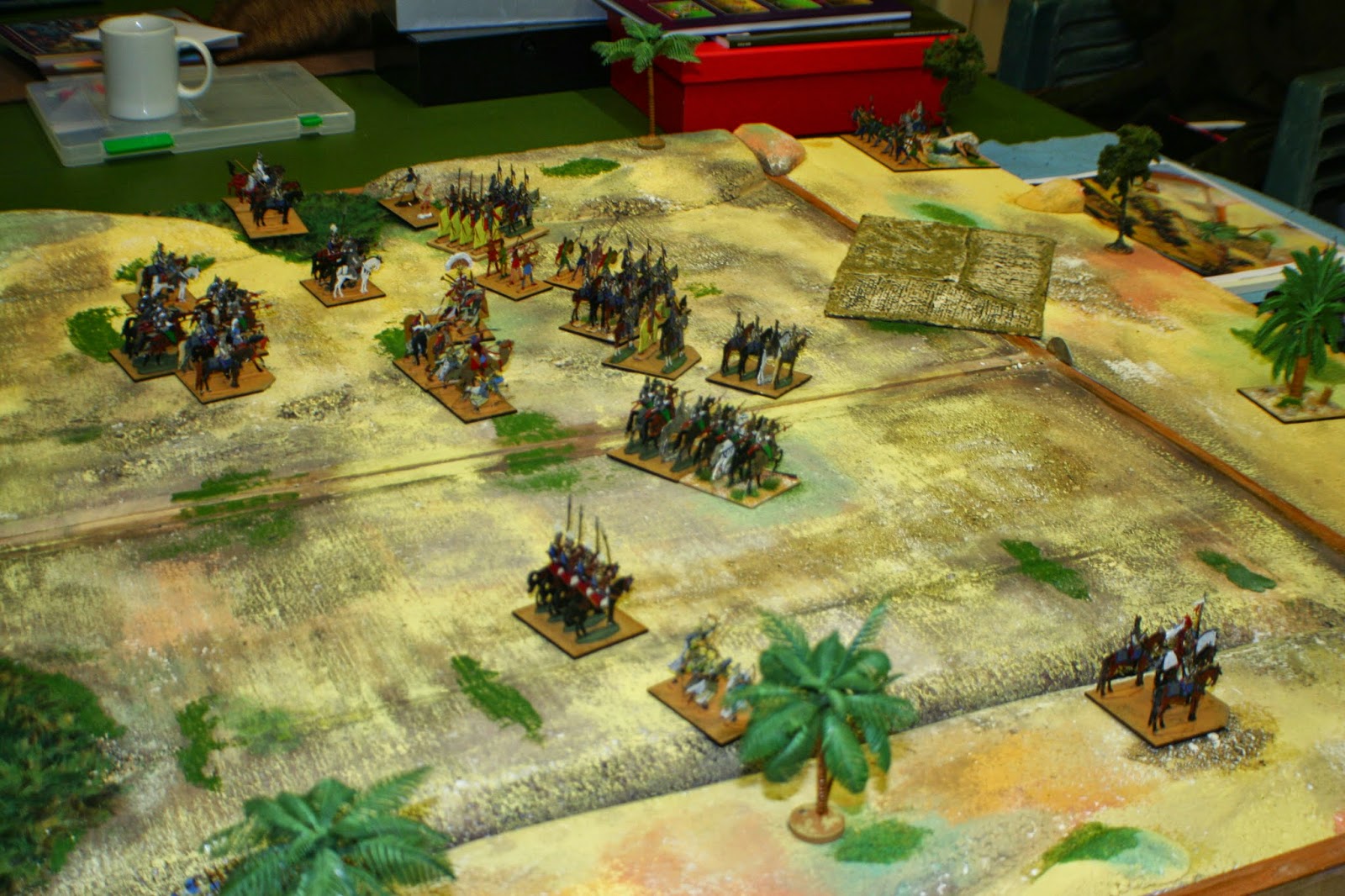 Many of the combats did not go as expected, - a classic light horse envelopment resulted in them all recoiling, one off the board, due to a 6:1 dice roll. 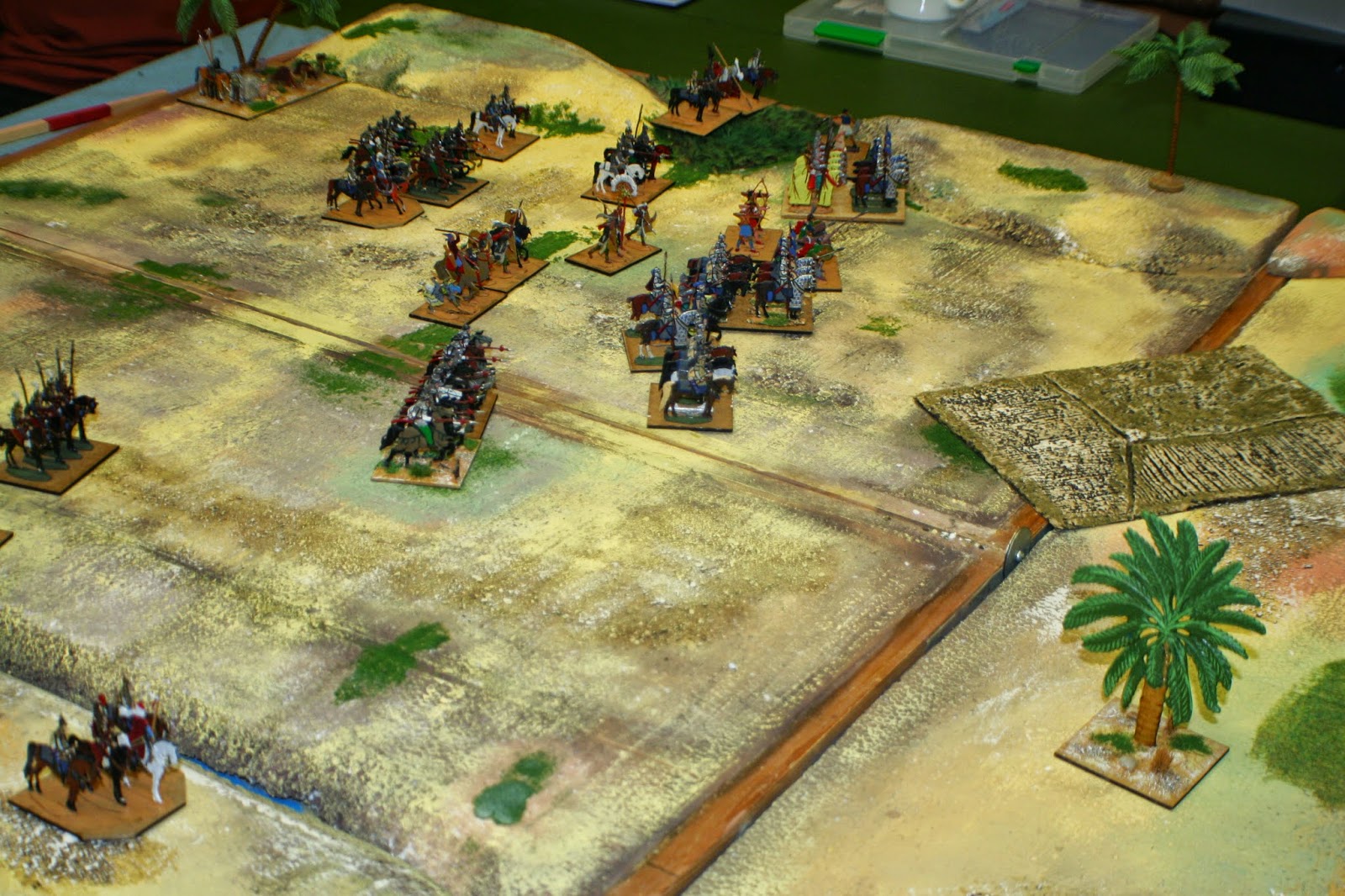 But it was soon too much for the Byzantines and we had their army broken albeit at a high cost to ourselves.

The idea of the flank landing worked better than Phil's previous ad hoc rule, so I think that stays in the scenario as a way of showing how the mechanisms can be "re-purposed" to good effect.

We had a good discussion about the Big Battle Rules. It is my contention that they have not been as well thrashed out as the main rules, and the writing style is much more...relaxed, and possibly open to ambiguity where the main rules are not. There are bits of them that I do not like, principally that it is several armies bolted together. That doesn't ring true to me, however convenient it is as a mechanism.

Still, a fine way to round off the day. I can only cross my fingers and hope that Phil finishes off the painting and basing by the deadline.
Posted by Trebian at 09:27