For a pre-Christmas game we got together to play some DBA 3.0. Phil has just finished his Viking army, of which he is justly proud, and wanted to give it an outing. See here for more pictures: Phil's Vikings.

The Vikings make a pair with pre-Feudal Scottish. Phil has done a propor job on both of them (Chris remarked to me that he has long ago given up being jealous of Phil's stuff and just got on with his life. He's probably right). 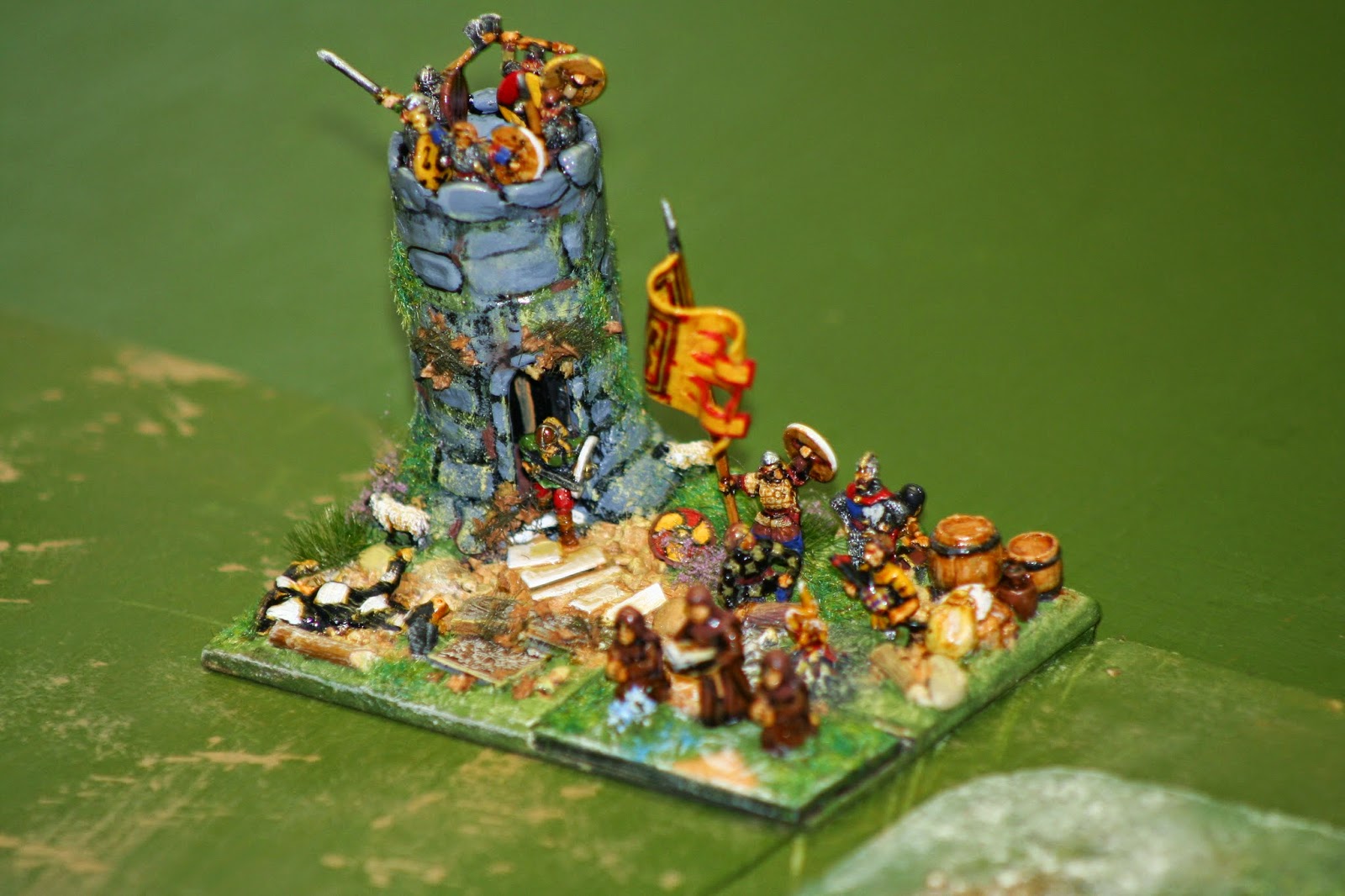 The Scottish camp is a Broch, with some detachable monks as defenders. The tower is made of something clever, but I can't remember what. 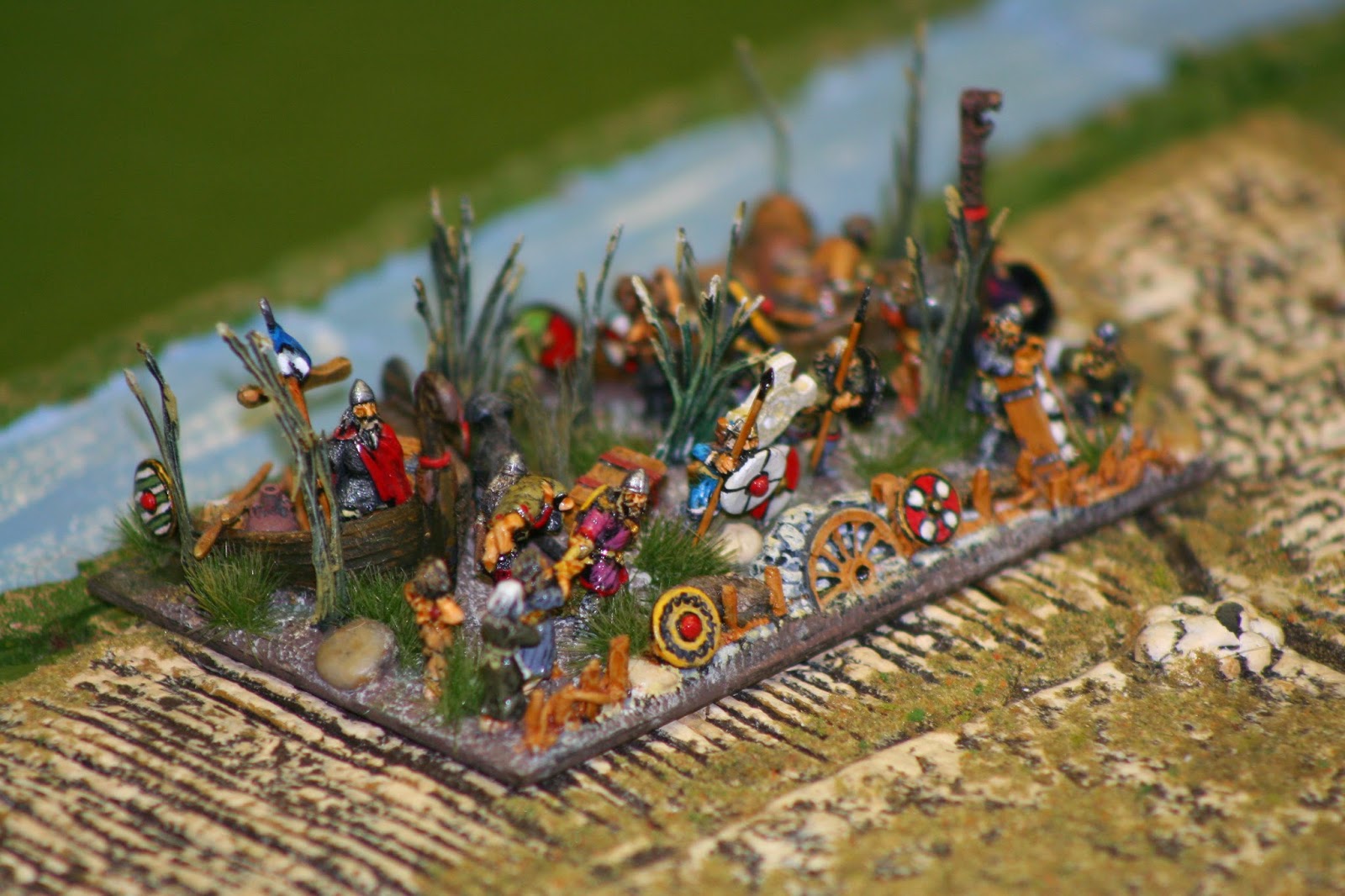 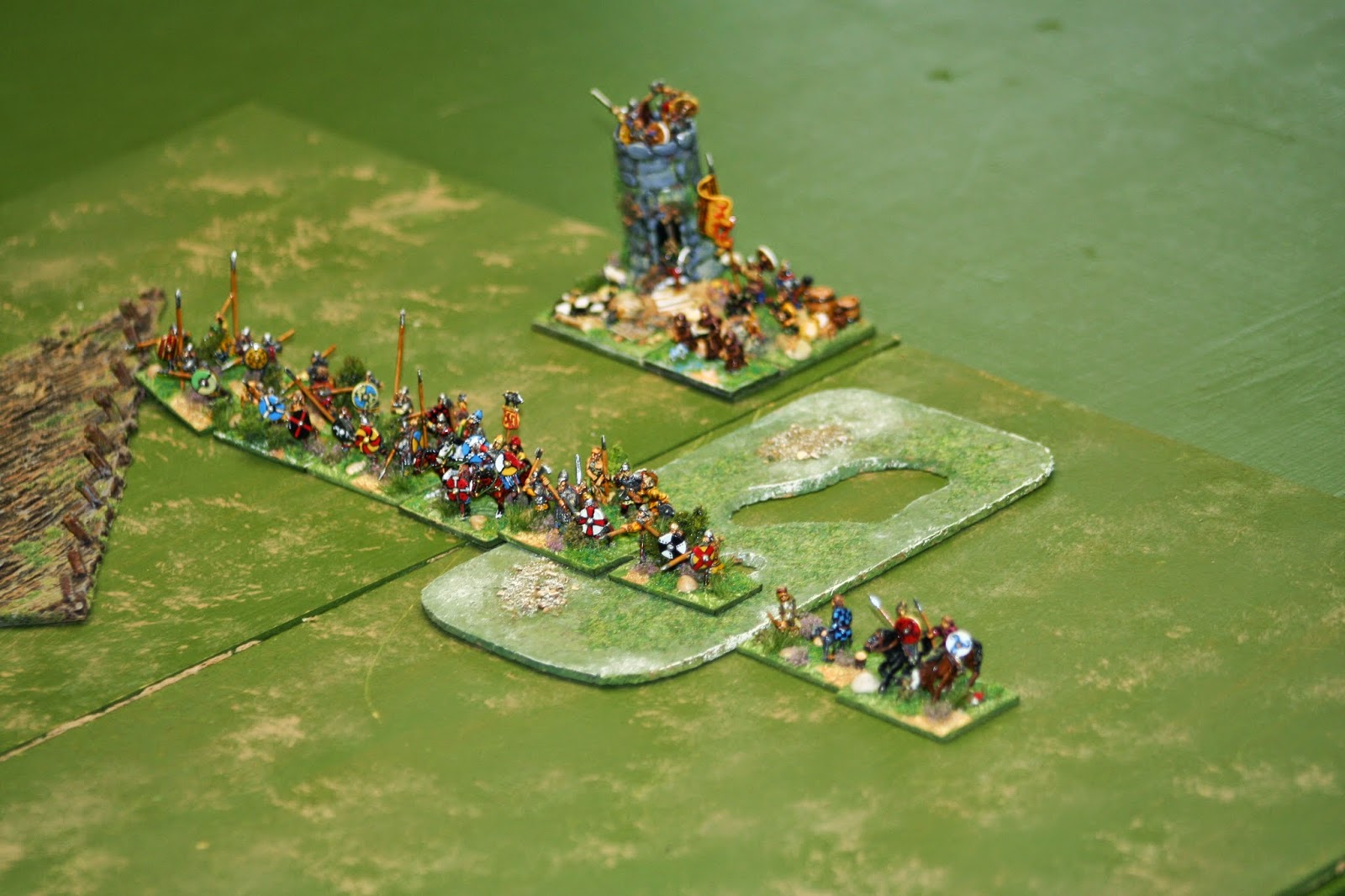 The Scots have a load of "fast" pikes, some warband and an element of light horse as well as a mounted cavalry General. Will commanded the army and put them out like this. Phil was his military advisor. 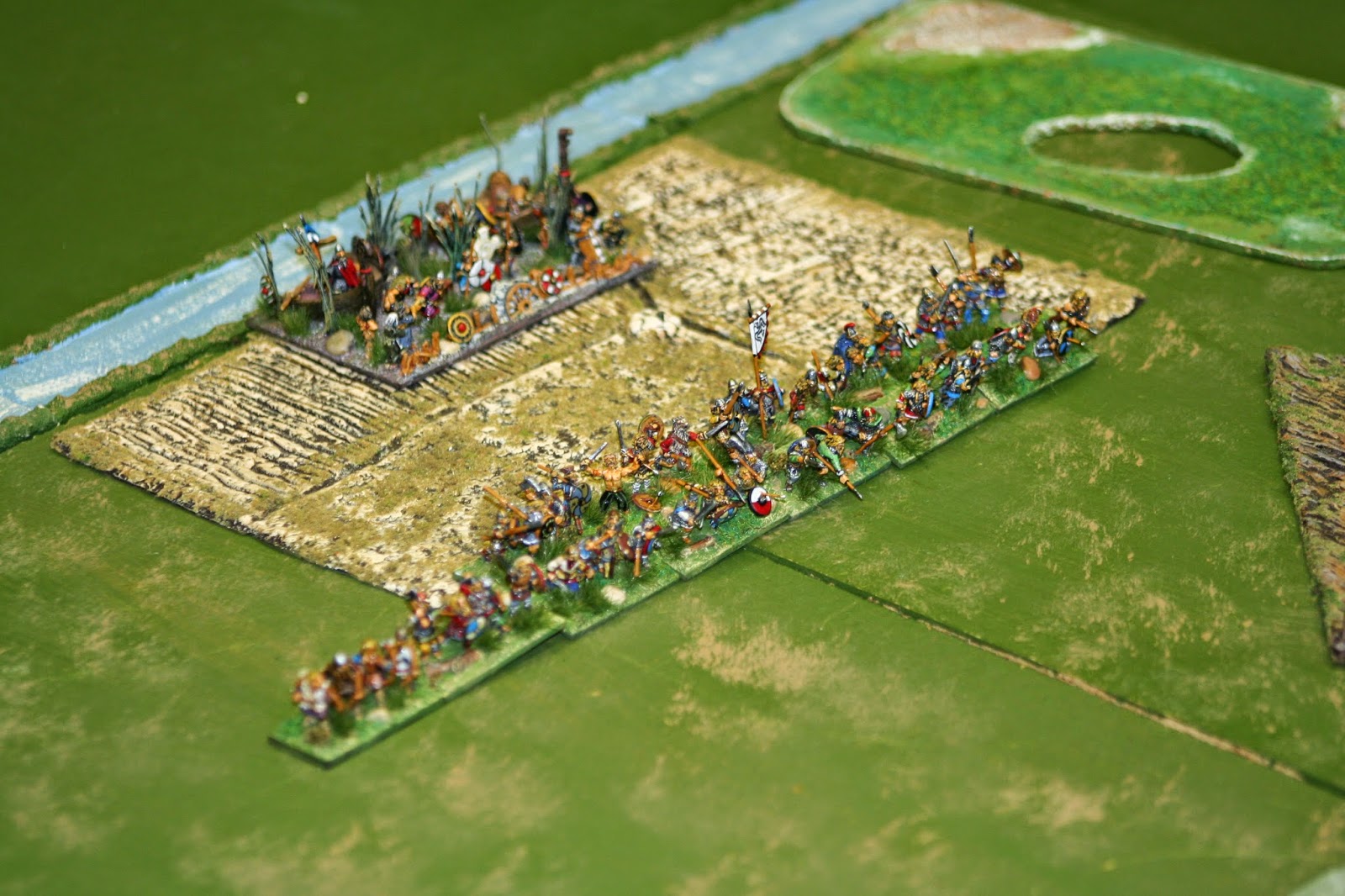 The Vikings have blades. And a bow element. I put the bow out on the right wing to shoot the light horse. Chris was my advisor. We had advisors as Phil & Chris have a copy of the rules and Will & I don't. 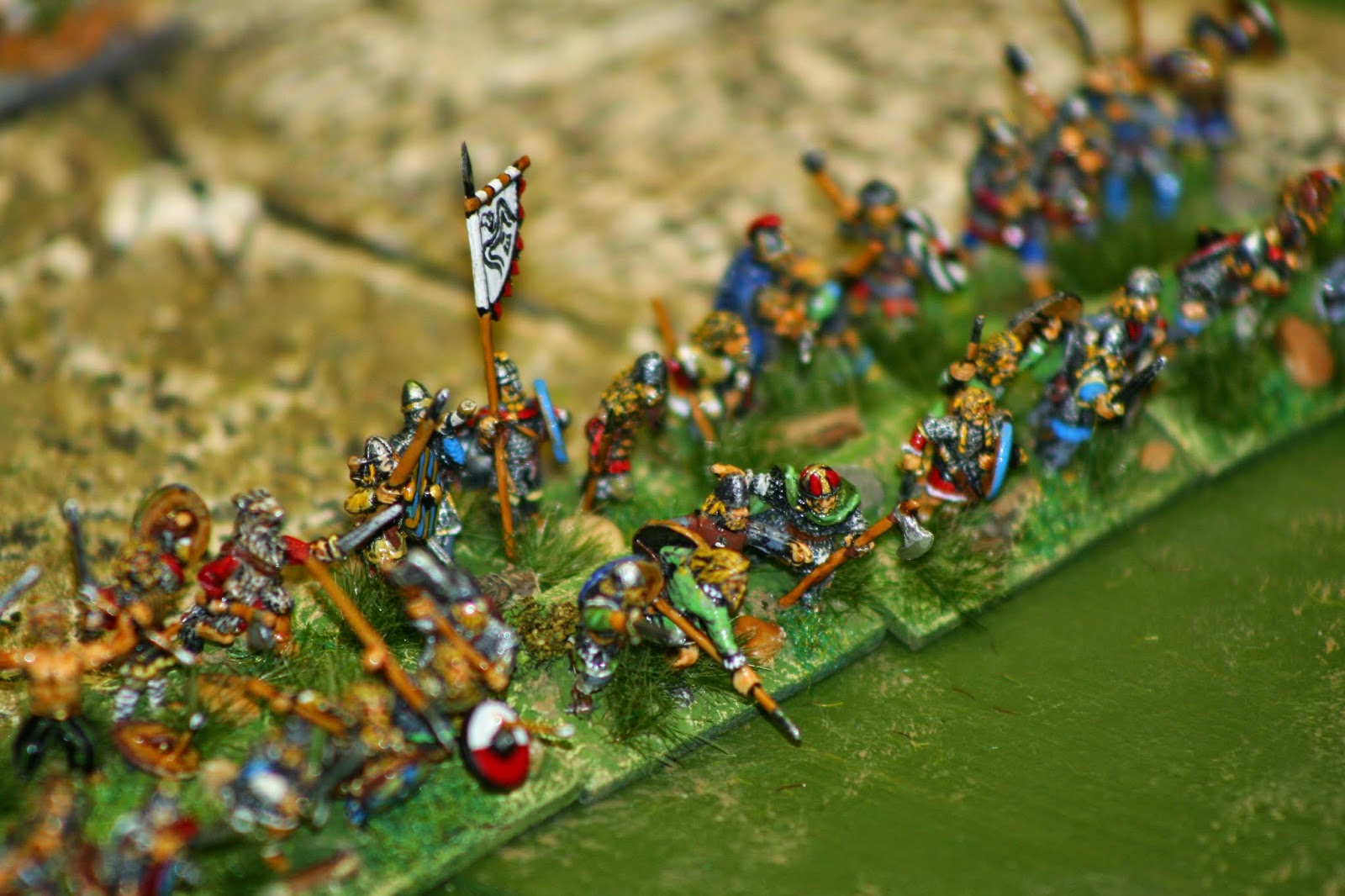 This is a close up of the Viking commander. All very nice. I'm in two ranks to prevent a break through, and also so I can easily expand to lengthen my line, having obeyed the deployment restrictions about being near the board edges. This will enable me to flank Will's line and kill him lots. 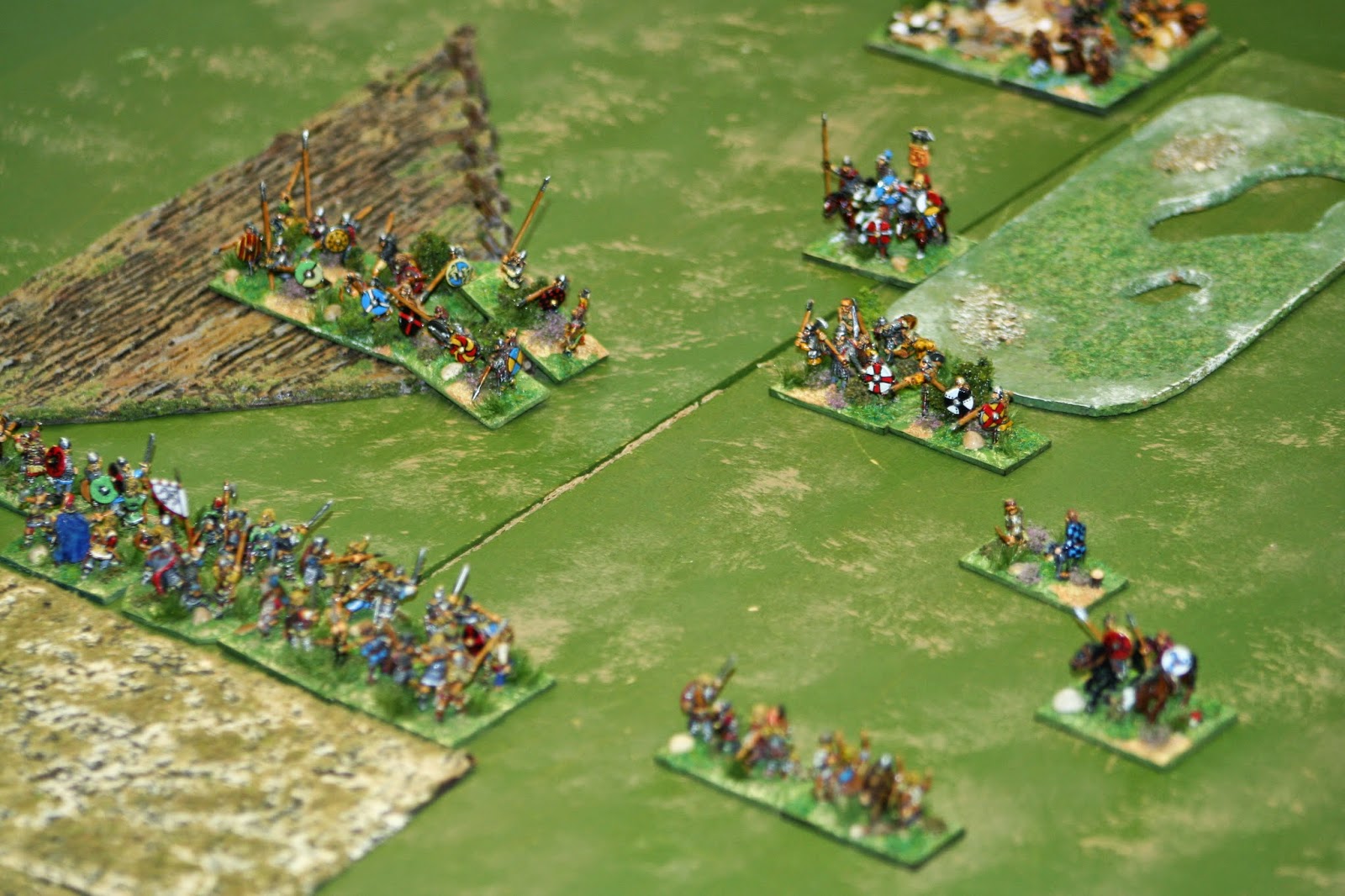 So off we go. Will tries to turn my line with his LH, so I send my bowmen out to hold him up.

The photos sort of stop here for a while, as I rolled 5 PIP dice of 1 in succession so not much moved. This meant my line just sat there, pretty much, not expanding whilst the LH danced round me without a scratch on them. Will wasn't going to close in the middle until his LH had finished their task.

DBA 3.0 has fixed a whole load of things I didn't quite care for in the earlier version (better bow ranges, better push back rules, etc) but they haven't/can't fix the crapness that arises from a run of bad PIP dice. Luckily DBA is over fairly quickly, as any wargame where you can't move your figures whilst your opponent does as he wants is pretty close to broken.

My shooting was rubbish too, so the LH managed to assault and ransack the camp, and then gallop off behind my line, which had moved forward but still couldn't expand to create any overlaps, as you can see below. 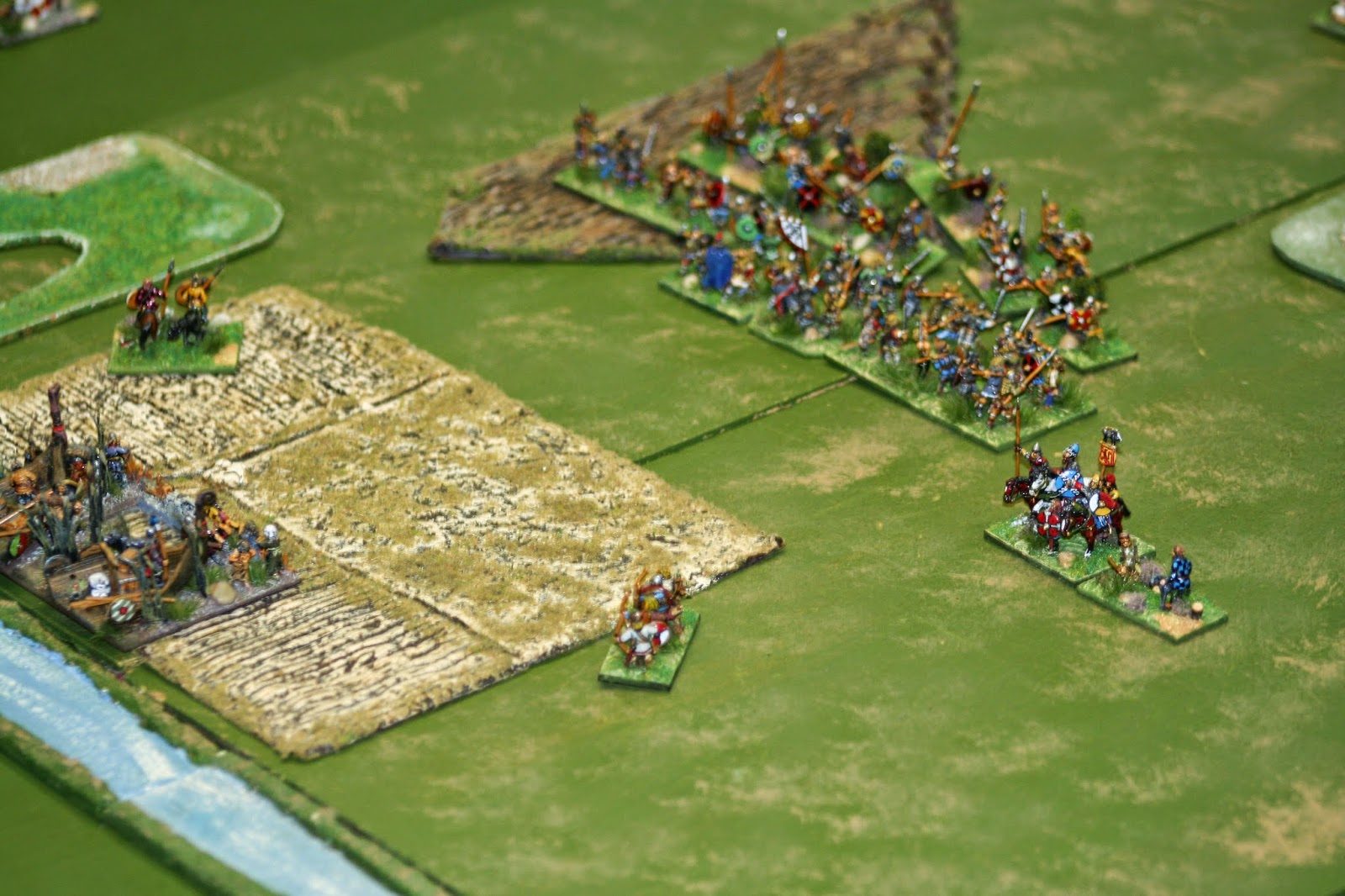 Yep, now got my rear and both flanks threatened by cavalry. 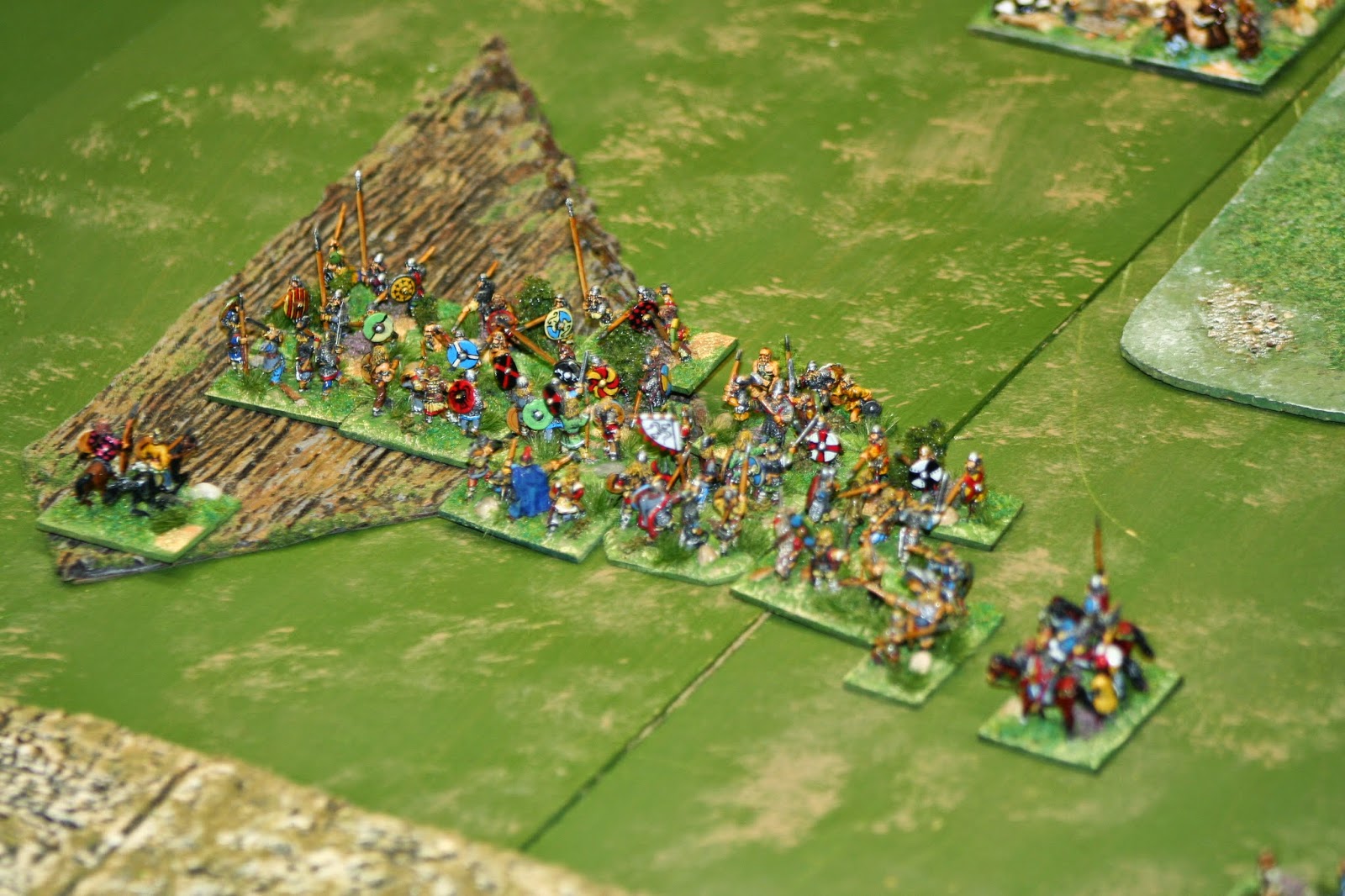 The central melee was a mix, with it going 50/50 I'd say. Will's flank attack by his General paid dividends and I lost an element as I couldn't recoil. I'm coming to the end of my run of 1's here, but basically I just had to stand there and put up with it. 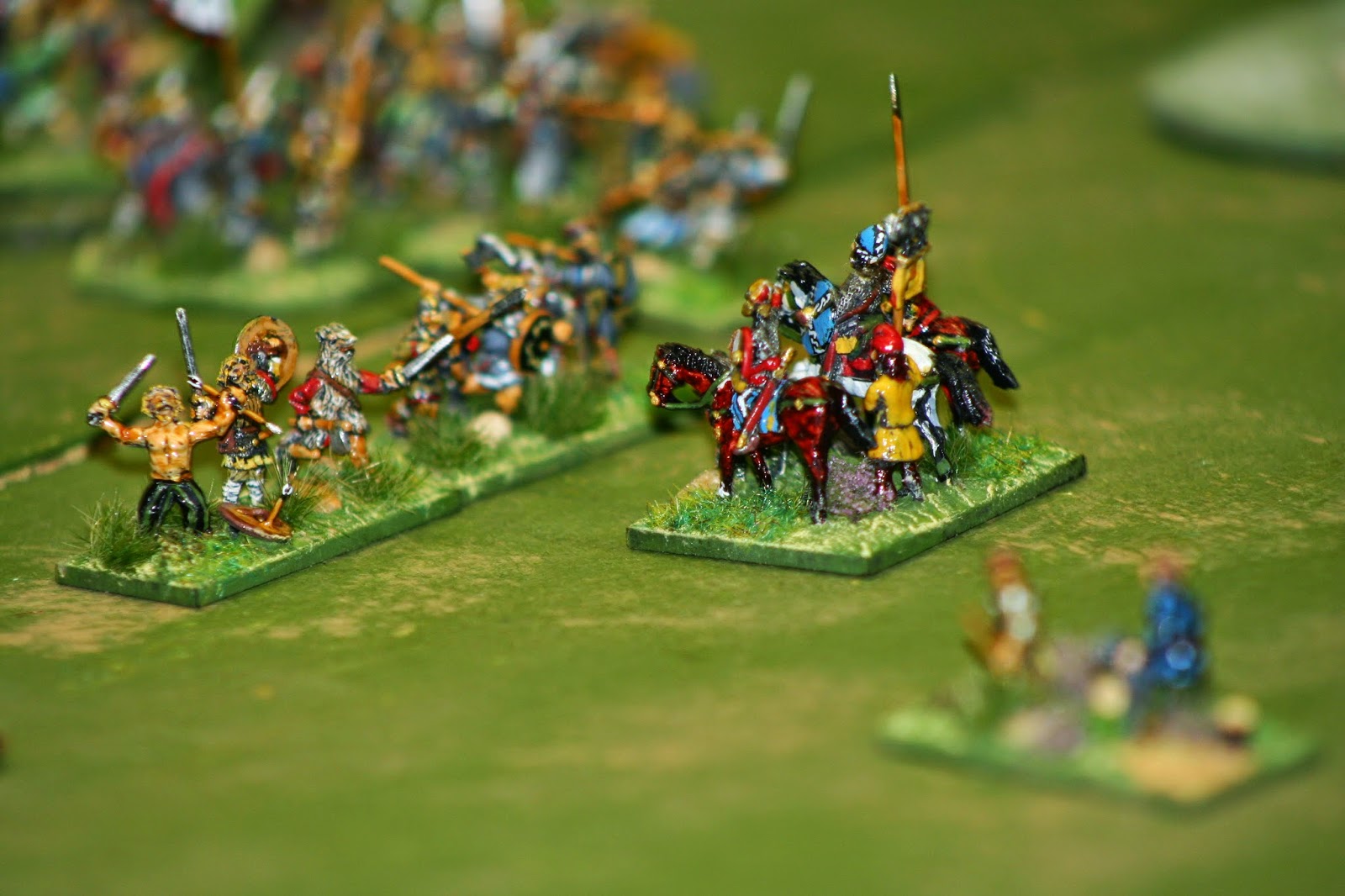 See, all I needed was a couple of PIPs to scare off his general. 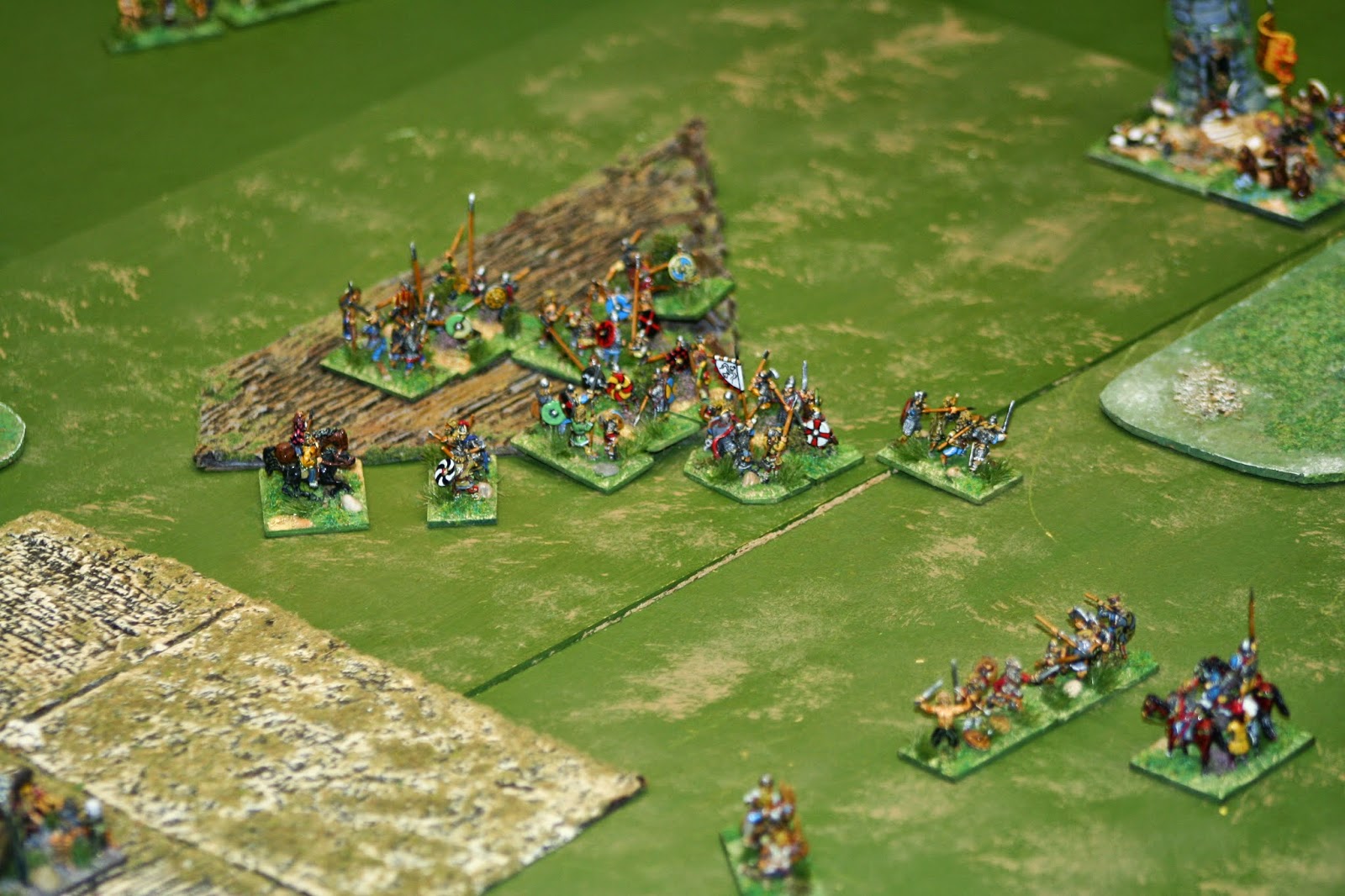 My sulks above not withstanding an enjoyable game with some nice stuff and some good friends. The PIP system is what it is, - DBA wouldn't work without it but it is also the reason I can't take the game as seriously as some do.

DBA 3.0 is the future of DBA, however. It has sold out and been re-printed and my copy is hopefully in the post. It is a cleaner, less cheesy game and a lot of fun. Its development has taken years and a significant number of players have been consulted and play tested it. The only reason I can see for sticking with DBA 2.2 is because you don't want to buy new rules (understandable) or because you have broken the mechanisms sufficiently for your own benefit (unforgiveable).
Posted by Trebian at 08:32