It’s been a few days since my last post. A few reasons for this. Firstly I'm working full time, so blogging during the afternoon is more problematical than it has been recently. My painting schedule has been disrupted, and I'm not running any games either.


On top of that there’s been Christmas related activity. I had a lot of my old team round on Saturday for mince pies and a catch up. Nearly three years since I got made redundant and they split up my department, but we still keep in touch.

Anyway, over the last week I've been able to fit in a few minutes painting here and there and my first Feudal Spanish  elements are done. These have been a bit of a challenge. I have generally steered away from the medieval period because of the whole heraldry thing. The Wars of the Roses was okay as no one is holding shields so no need for all that painting of lions and so on. Mostly.

The other thing is that heraldry is so personal. It identifies who the man in the armour is and you have to be careful if you are using the real stuff that at least the guys concerned were alive at the same time. On the other hand in the early 11th century the whole system is still a bit simpler than it later becomes and simple geometric devices aren't uncommon.

Plus Phil has a lovely 15mm Feudal Spanish army. Not that I'm competitive. Besides I'm doing 20mm plastic. 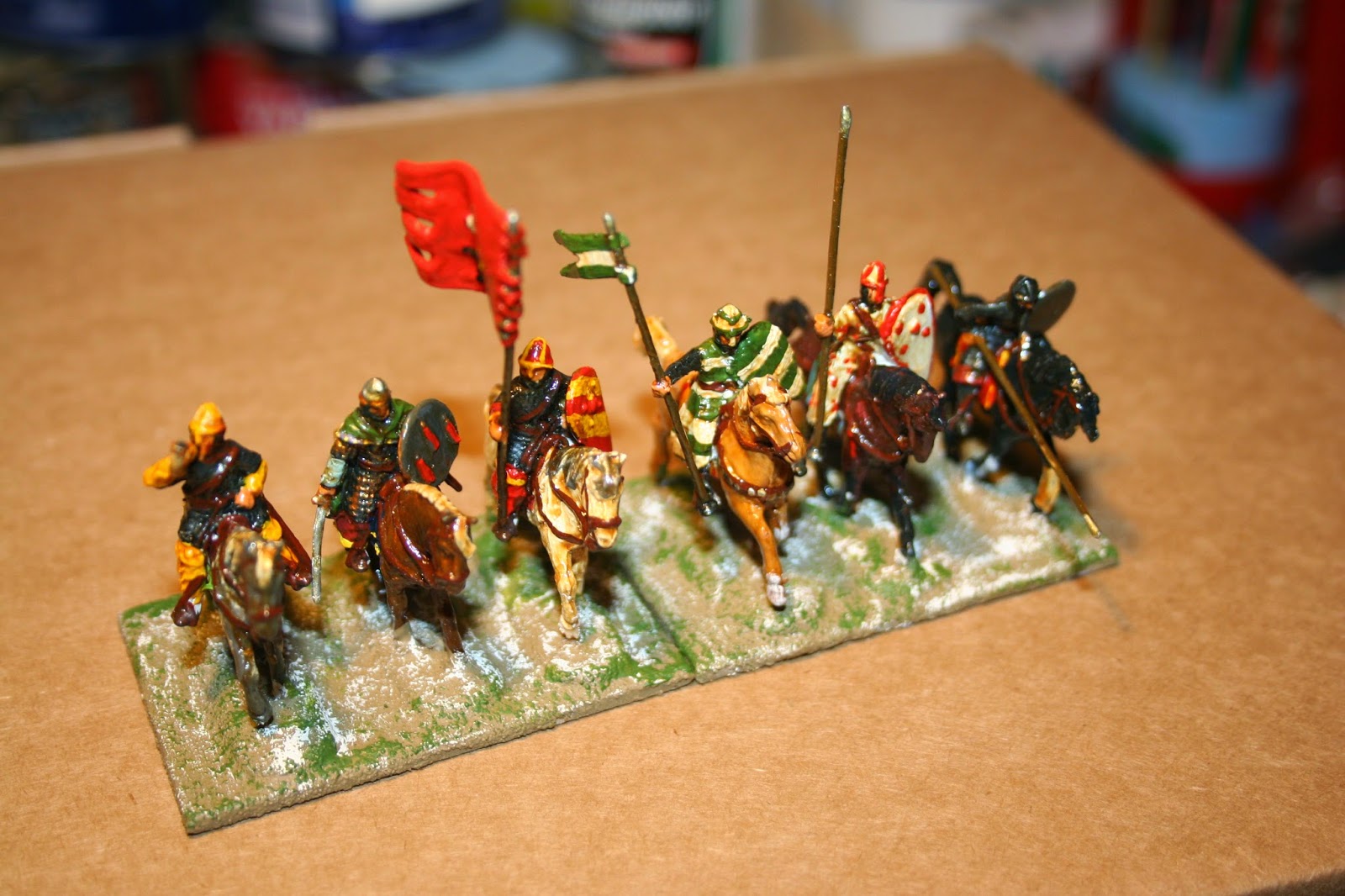 There’s nothing particularly remarkable about these two elements. One is made up of figures from the Hat El Cid Command box, the other from the Hat El Cid Spanish Heavy Cavalry. Compared to their Arab / Moroccan adversaries the mounted figures are quite slight. Those of you who regularly look at 28mm Perry style figures will notice quite a change. In build and proportions these are much more like Ral Partha figures of old, and more like the build of the figures you see in medieval manuscripts.

The trumpeter in the command element has a separate arm for his instrument. This fits on its peg really well and didn't seem to need the little blob of superglue to hold it in place, although I used it anyway. The Leader figure is clearly intended to be The Cid, so I gave him the round shield from the options in the box. 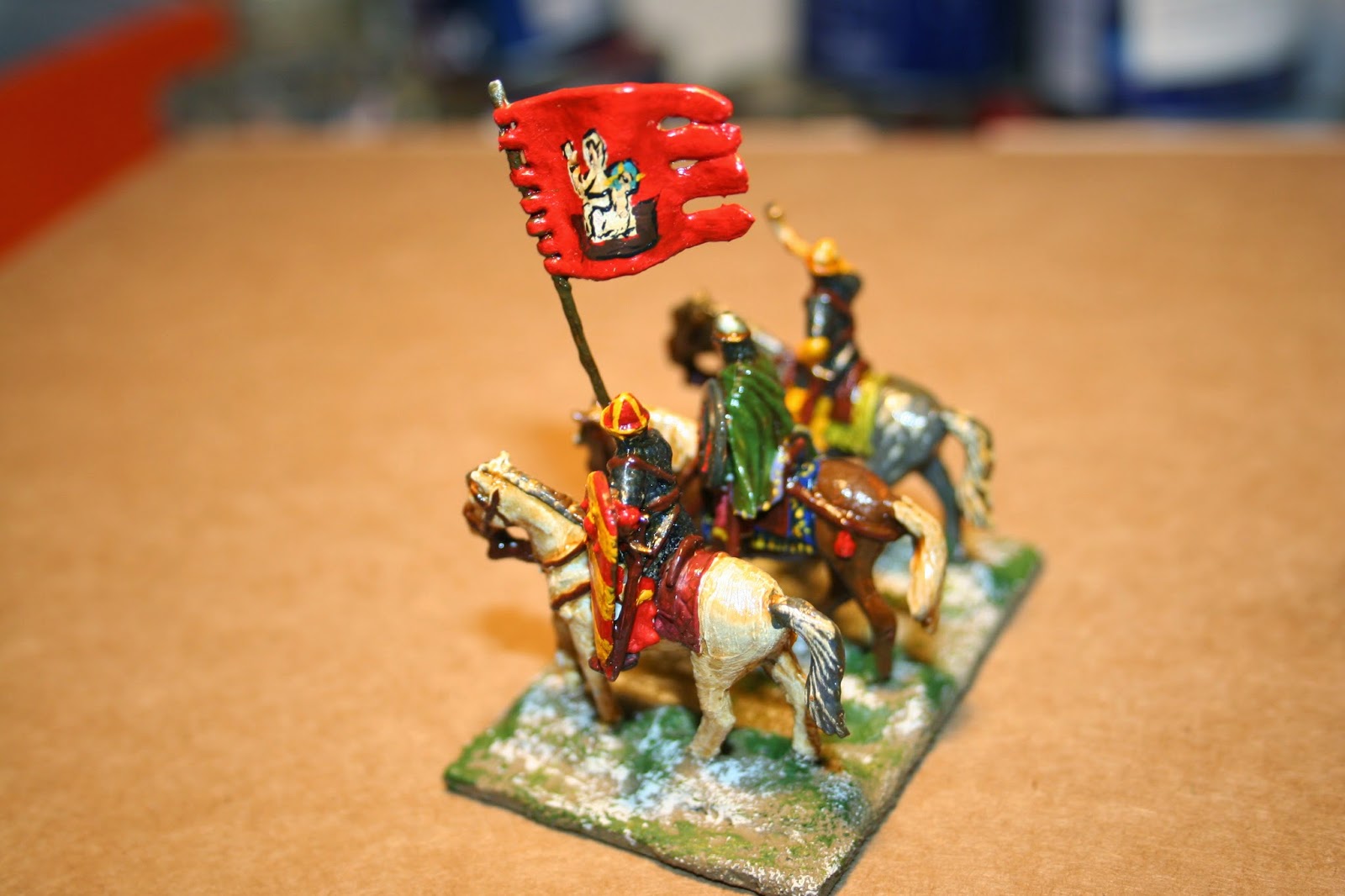 The standard bearer had a bit more work done on him. The kite shield is added from the spares on the sprue, but the standard was a problem. The box comes with a nicely modelled flag, with rounded partitions along the edge. I can never get that effect with paper or any other method I've tried. So I wanted to use it, but it’s on a plastic wobbly lance. So I got a bit bold. I cut the flag from the lance pole, and carefully made holes in the flaps where the pole goes with a fairly big safety pin (it was too small flexible and small to use a drill) and then pushed a  pole made from florists wire through as a replacement. It isn't perfect – I missed some of the flaps – but it looks alright and went into the figure’s hand okay. It is held in place at the bottom by being glued into a hole drilled into the figure’s foot. 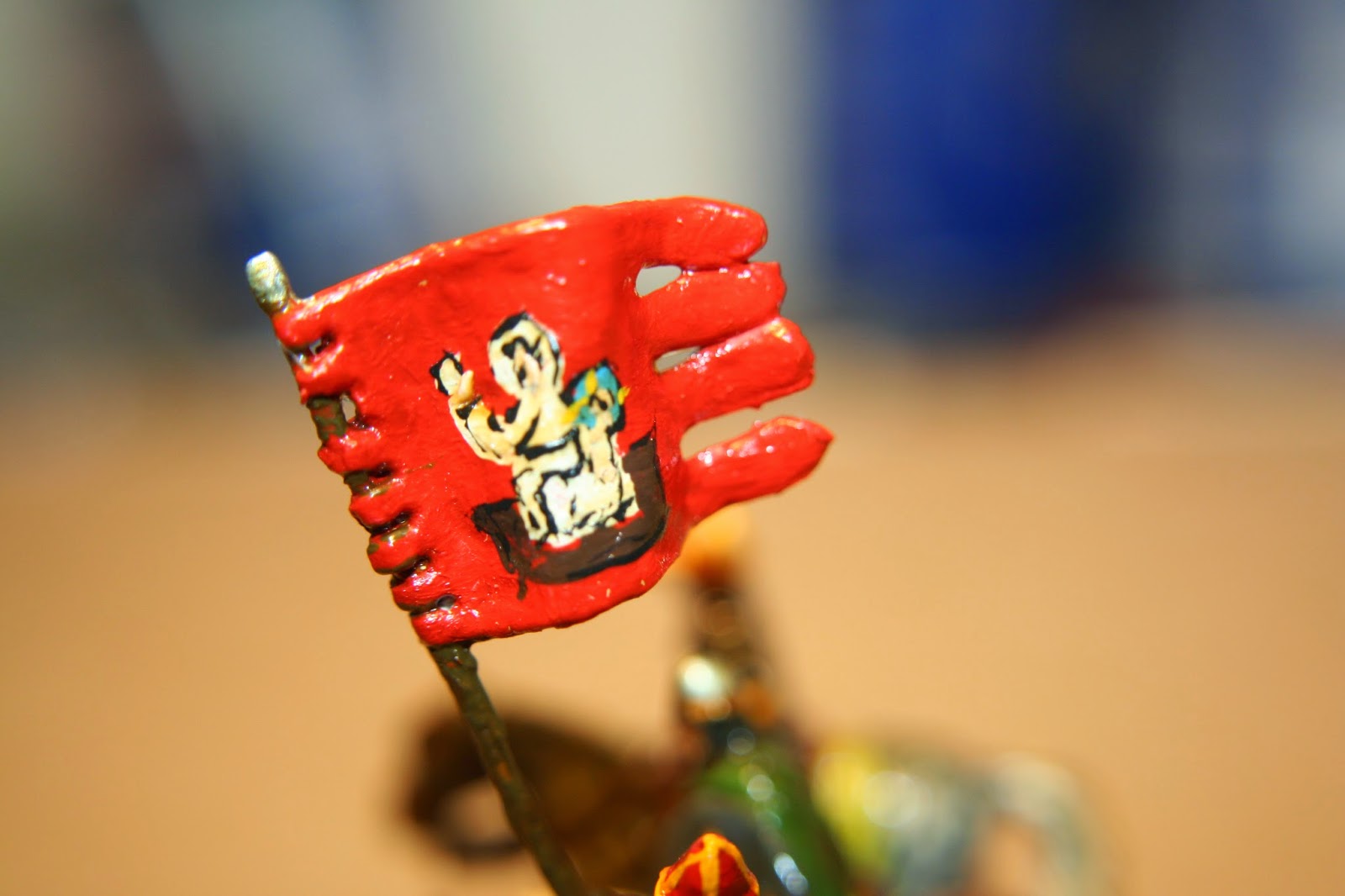 I got quite ambitious with the design on the flag as far as what I'm normally prepared to paint, but I'm pleased with the result. It's the Madonna and Child. Honest. The other element of knights had lances replaced by florist wire and the green surcoated figure had his head swapped out for one of the spares in the Command box. He was wearing a flat topped helmet that’s a bit later than the Murabit period, so that had to go.

Unlike my normal cavalry units these have quite a mix of horse colours as I reasoned every man brings his own horse and fights with his friends, so no enforced uniformity of colour.

So that’s two elements done. Next up are some DBA Cv elements, - heavy cavalry with javelins in this case. Then I can get on to the infantry. I have a few days off over Christmas, so you never know, -a new army in the New Year?
Posted by Trebian at 21:19