A face off between Al and Cid

Any form of actual gaming has been mostly absent from my calendar of late. Too much commuting and too much to do at weekends. However this Saturday afforded me a small window to squeeze in a game and try out my new armies using DBA 3.0. Okay, so I haven't built any camps yet, so some improvisation is required.

I'd been having some feelings of dissatisfaction with the army list (III/33) that I'd been using for my Murabits.. Not with the troops types as much as the other bits and pieces. The list is generic North Africa/Sicily and covers a wider period than the 60 years or so of Almoravid domination. Then, about 20 minutes before my opponent was due to turn up I discovered I was using the wrong list. I should have been using Islamic Berber (III/75). A hasty re-jigging of the bases I had out produced me a close approximation of the army (some African lancers standing in for Christian knights) and I was ready, but also had a new painting list.

My opponent for these games was Phil. He'd got some stuff for me from a recent Peter Pig order and it seems churlish not to invite him in for a game if he's come past to drop the stuff off.

Enough of that and on with the game.

Phil has a 15mm Feudal Spanish army, so he took their 20mm bigger brothers for the first game.It may not be the troop mix he's used to, but he had a plan. Of course this is the first game he's used the army for under DBA3.0, so a few surprises might be ahead for both of us. 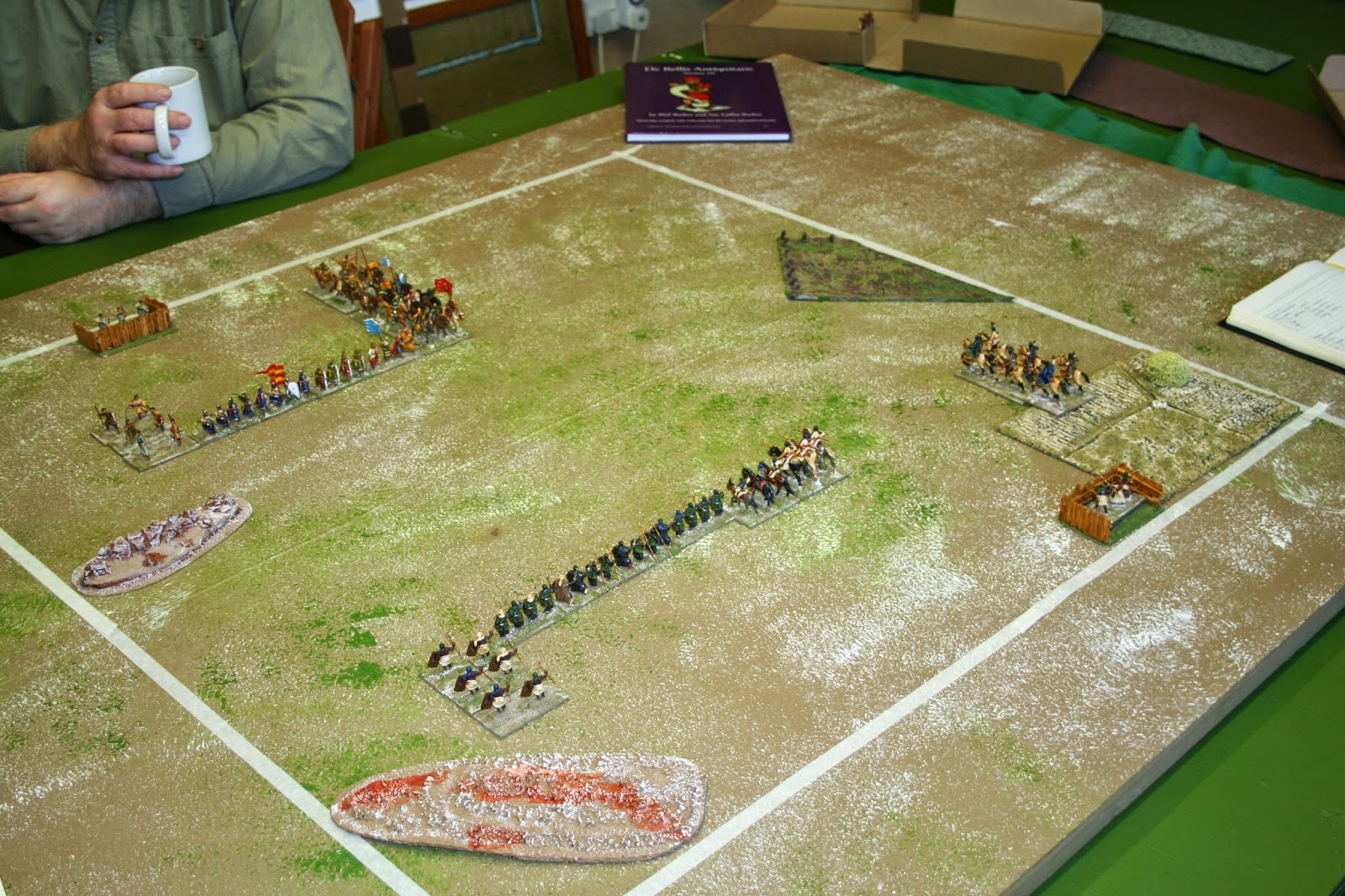 Phil was defending, so he set up first. I sort of mirrored his deployment, but pushed my Light Horse out wide to try and get round the flanks. 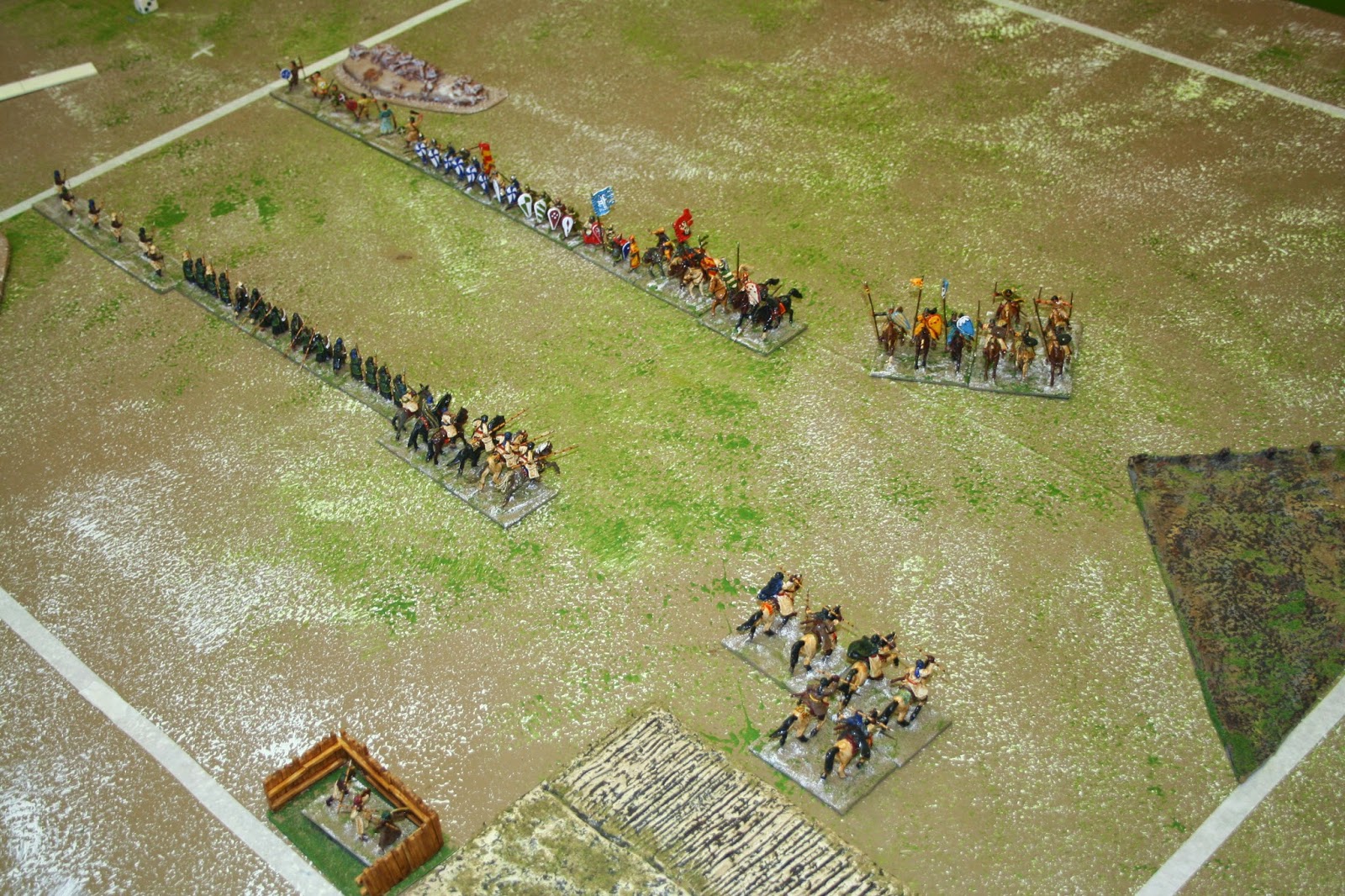 Phil advanced generally, and pushed his cavalry/knights out to his left to mask off his exposure to my Light Horse. He's doing something clever with his single base of Light Horse apparently. I rolled a 1 for my PIPs and so didn't do much. 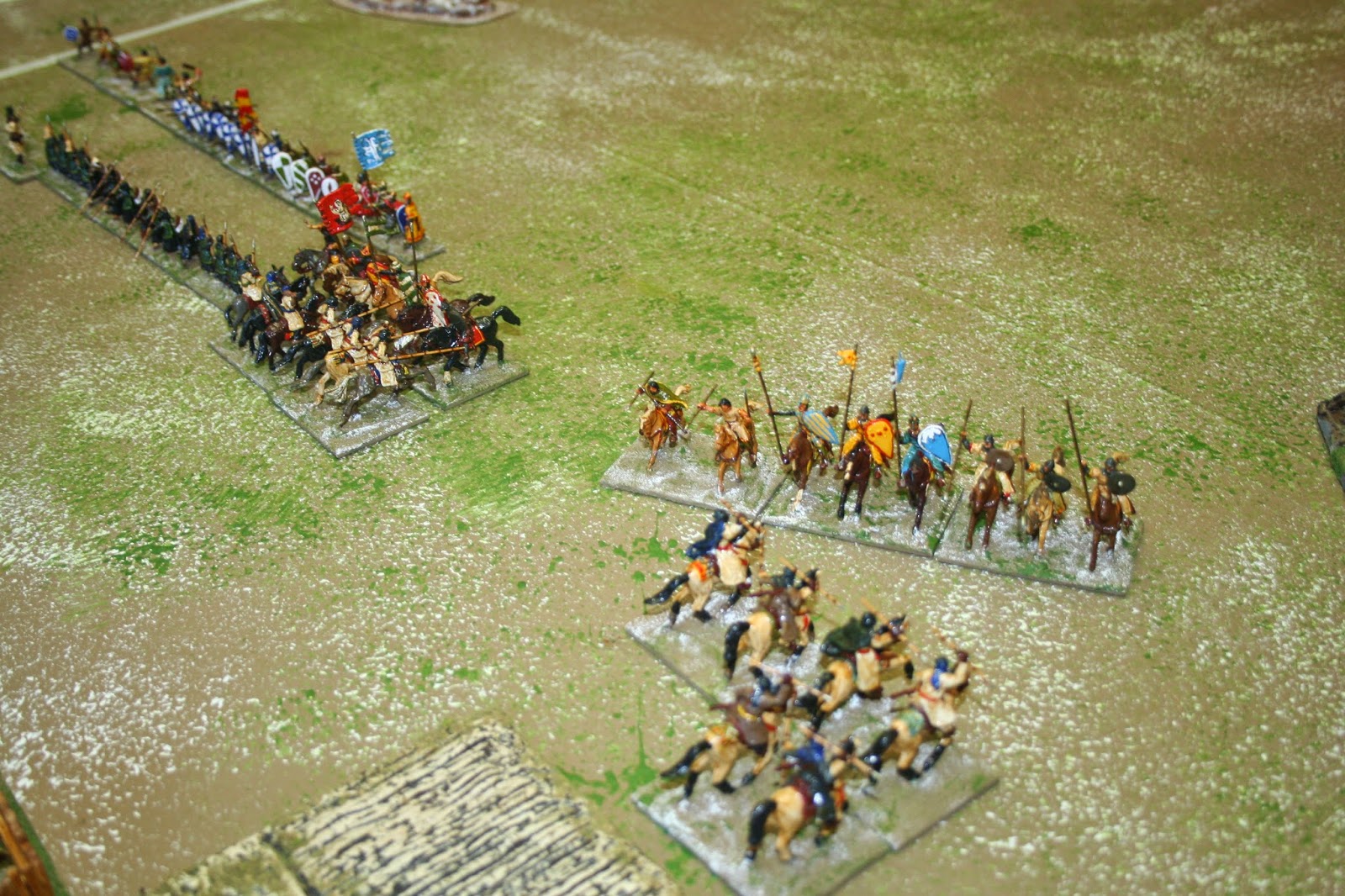 Phil threw his Knights into the end of my line, forgetting that what looked like some Berber cavalry was actually Knights. He's managed to pin my Light Horse into the corner too. Brilliant die rolling by yours truly killed the Knight unit with the red banner. You should note that due to a lack of figures that the Spanish general is the foot blades with the blue banner. My general is the inoffensive looking guy with the donkey and the trumpeter. 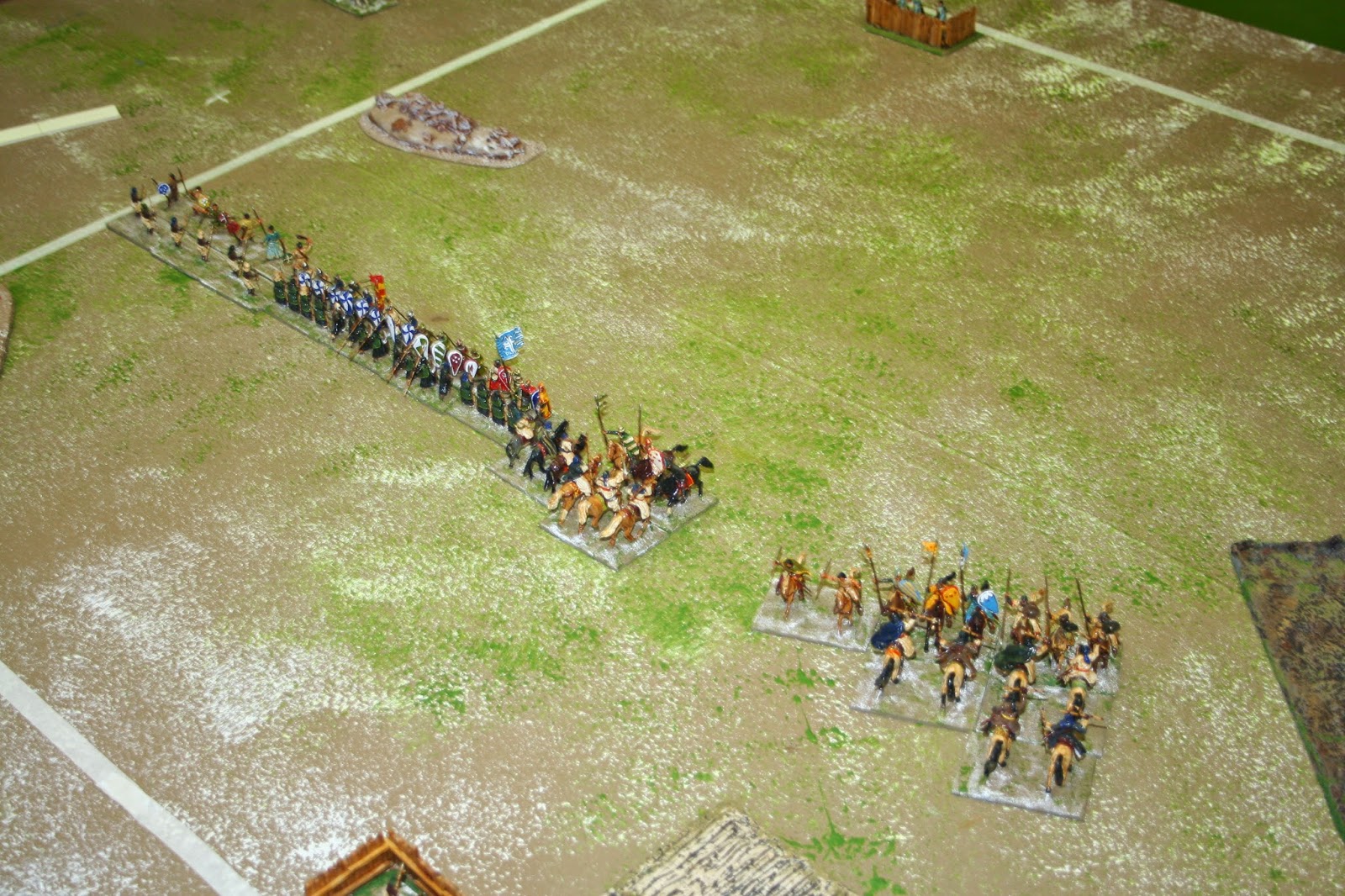 My turn and I just engage all along the line. It is evenly matched, which when facing an opponent who is tactically more competent than you are is not a bad deal. 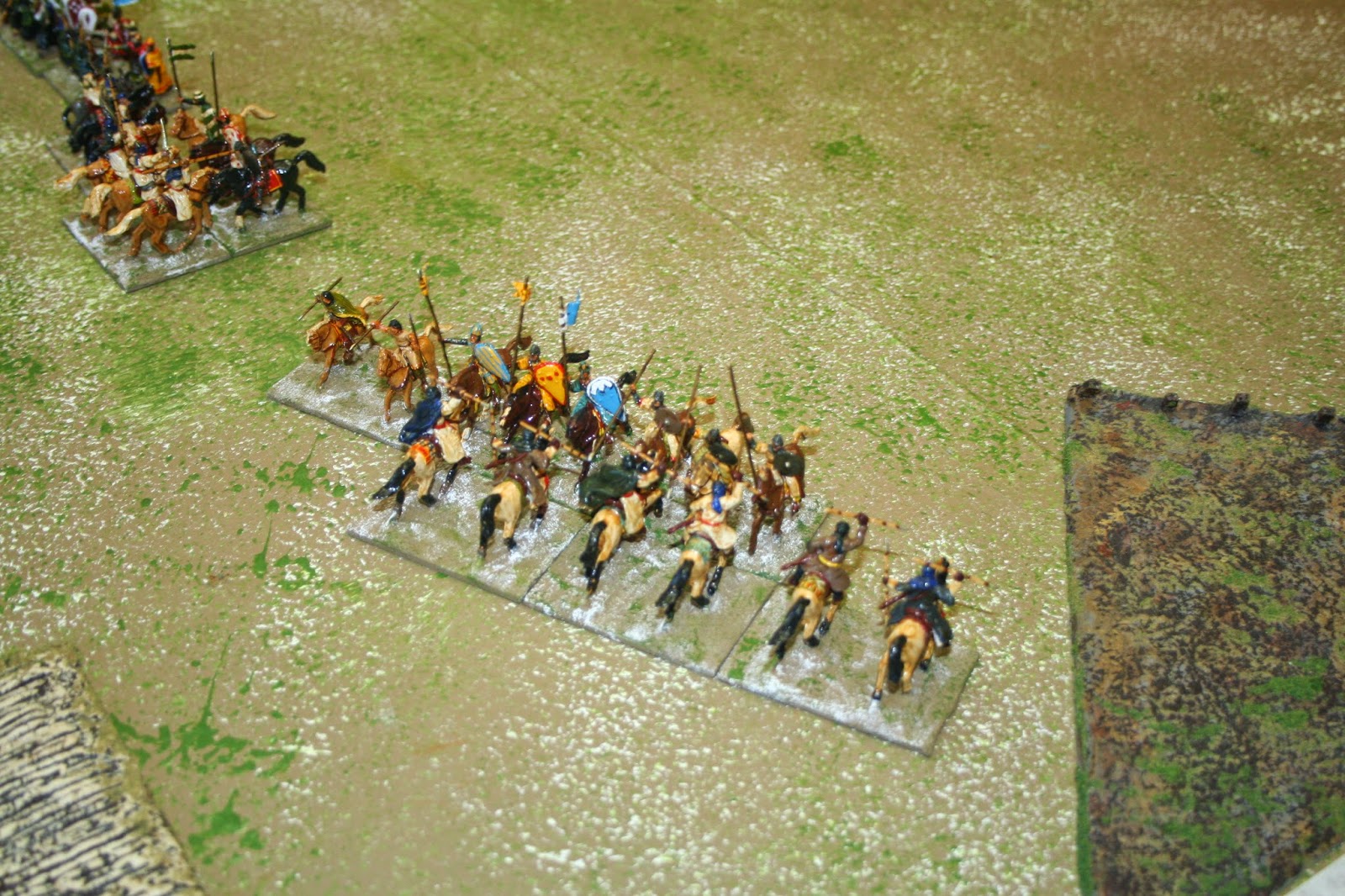 I'm seriously out matched on this flank, but I actually get away with it. 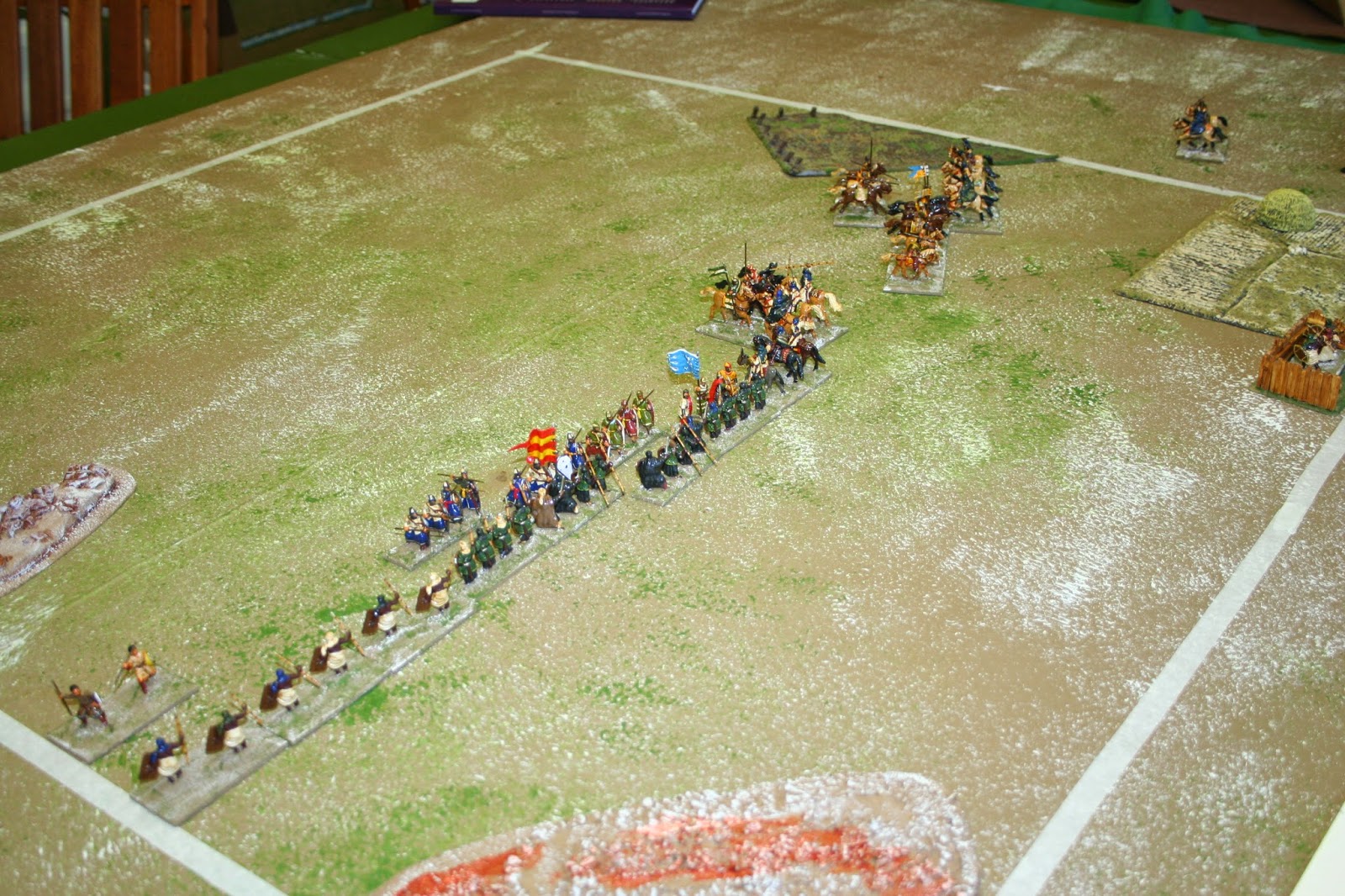 The combats in the middle go my way in spades. Lots of the Spanish recoil and I get two kills on the Psiloi. That pushes Phil's dead pile up to three and I'm still firing on all cylinders, except for one base of Light Horse dead out on my right.. 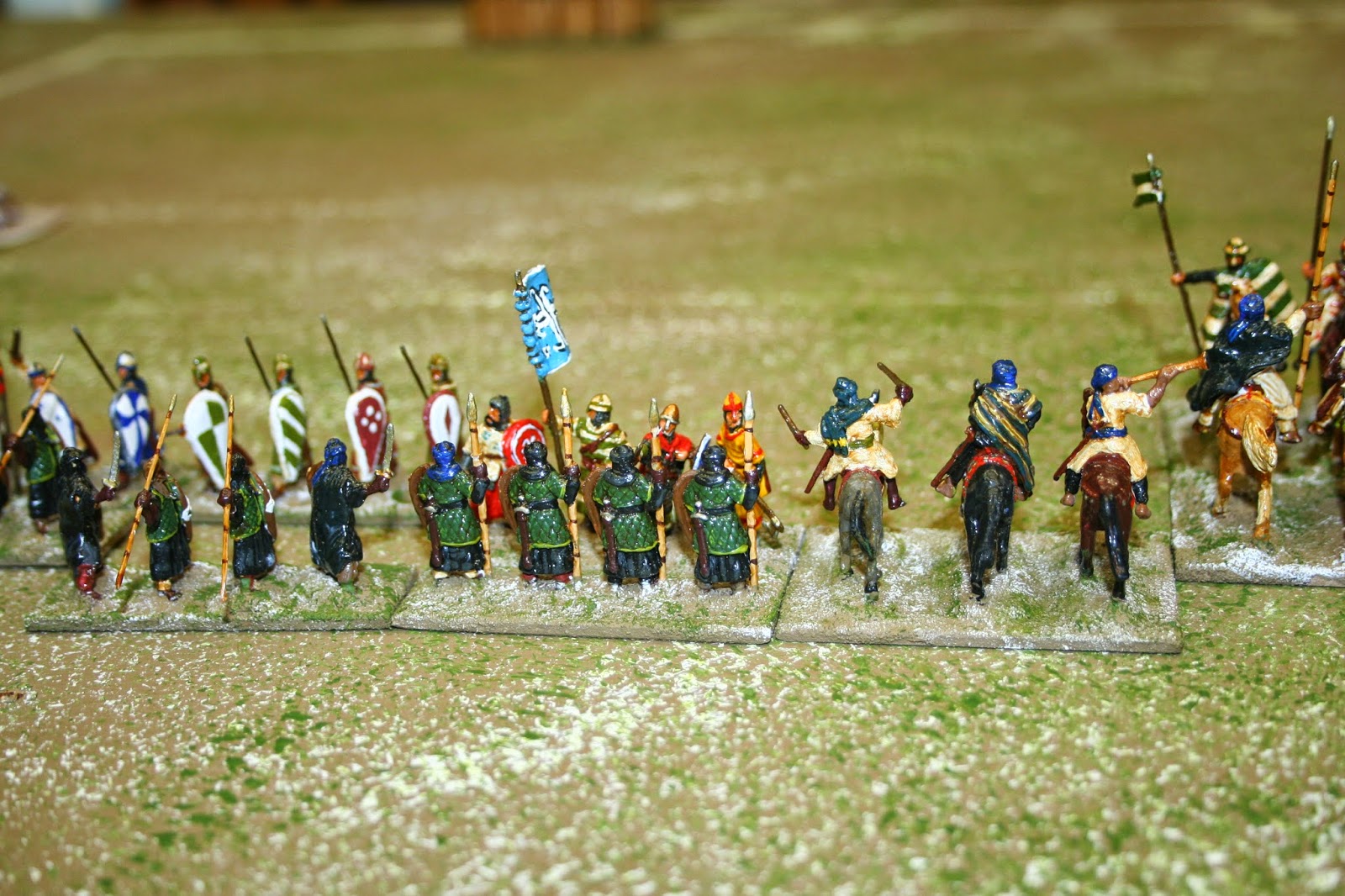 I just like this view from behind my line. 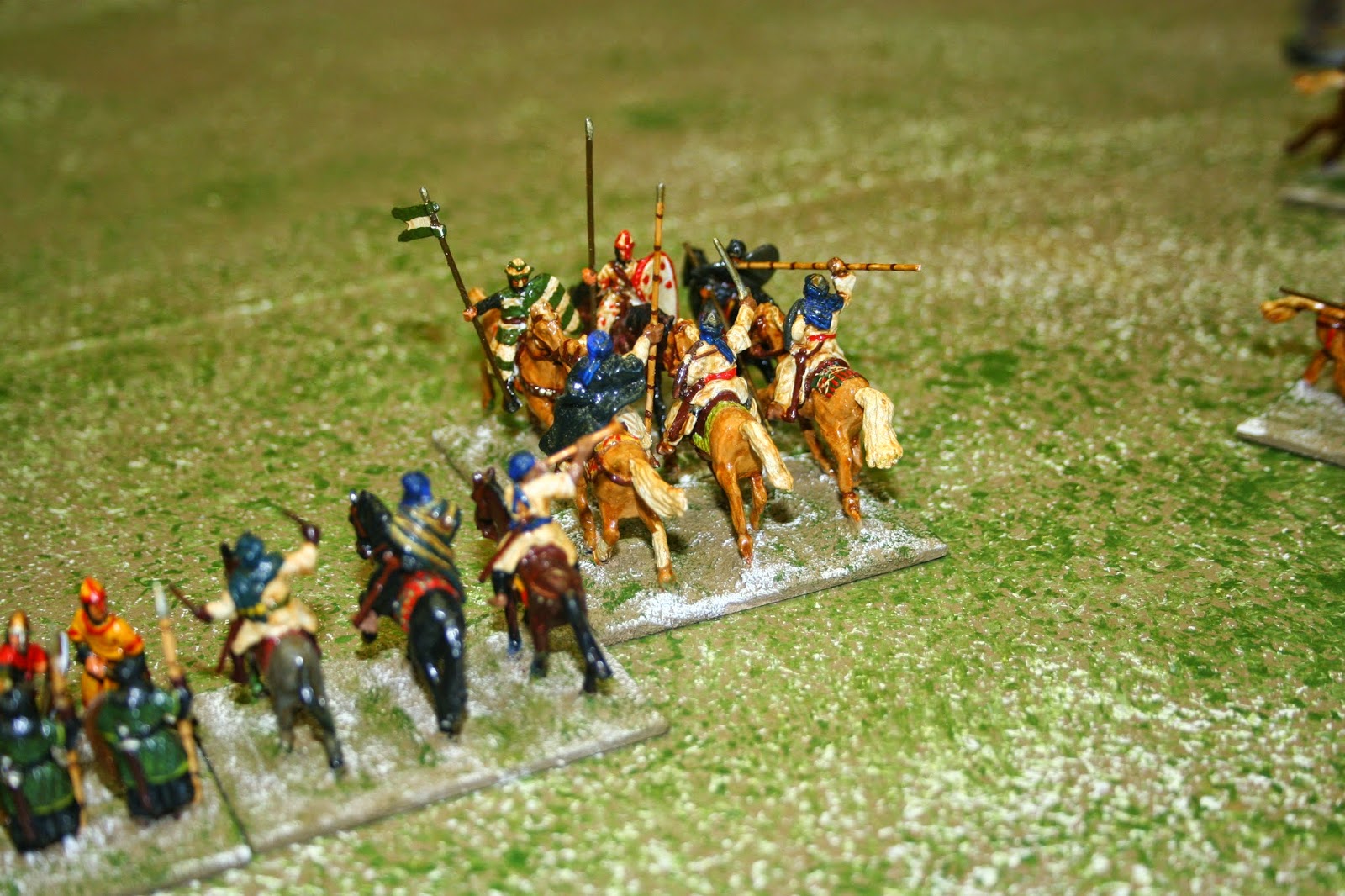 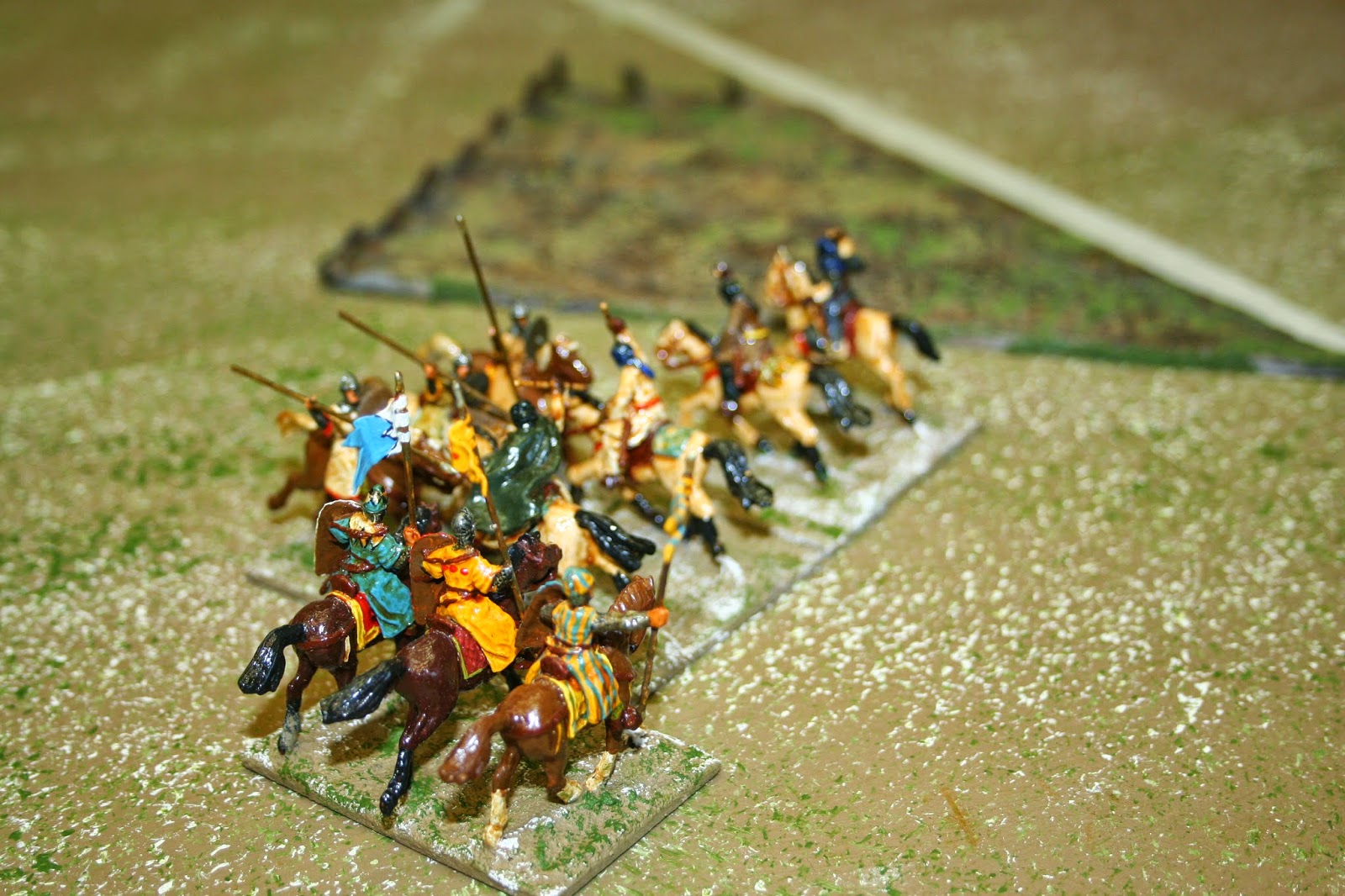 So Phil needs to kill lots in his next turn and goes for it full throttle. He turns his Knights in on the flank of my Light Horse. Ooo-er. 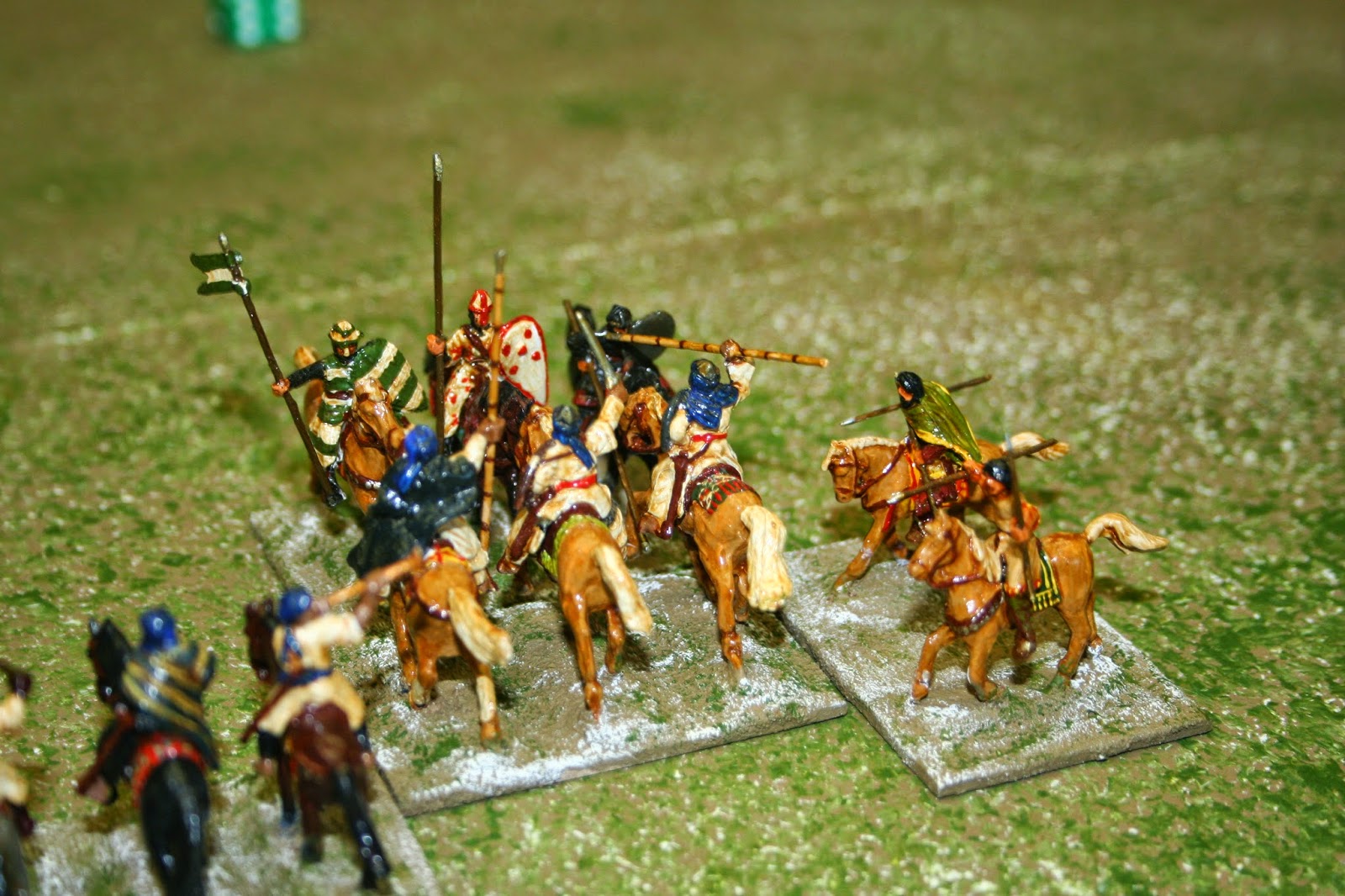 His Light Horse from the combat on my right peel off and catch the flank of my Knights. This is bad news. As I pushed Phil back last turn he is no longer overlapped by my General base. At the end of the turn Phil has pulled the game back to 3 all. 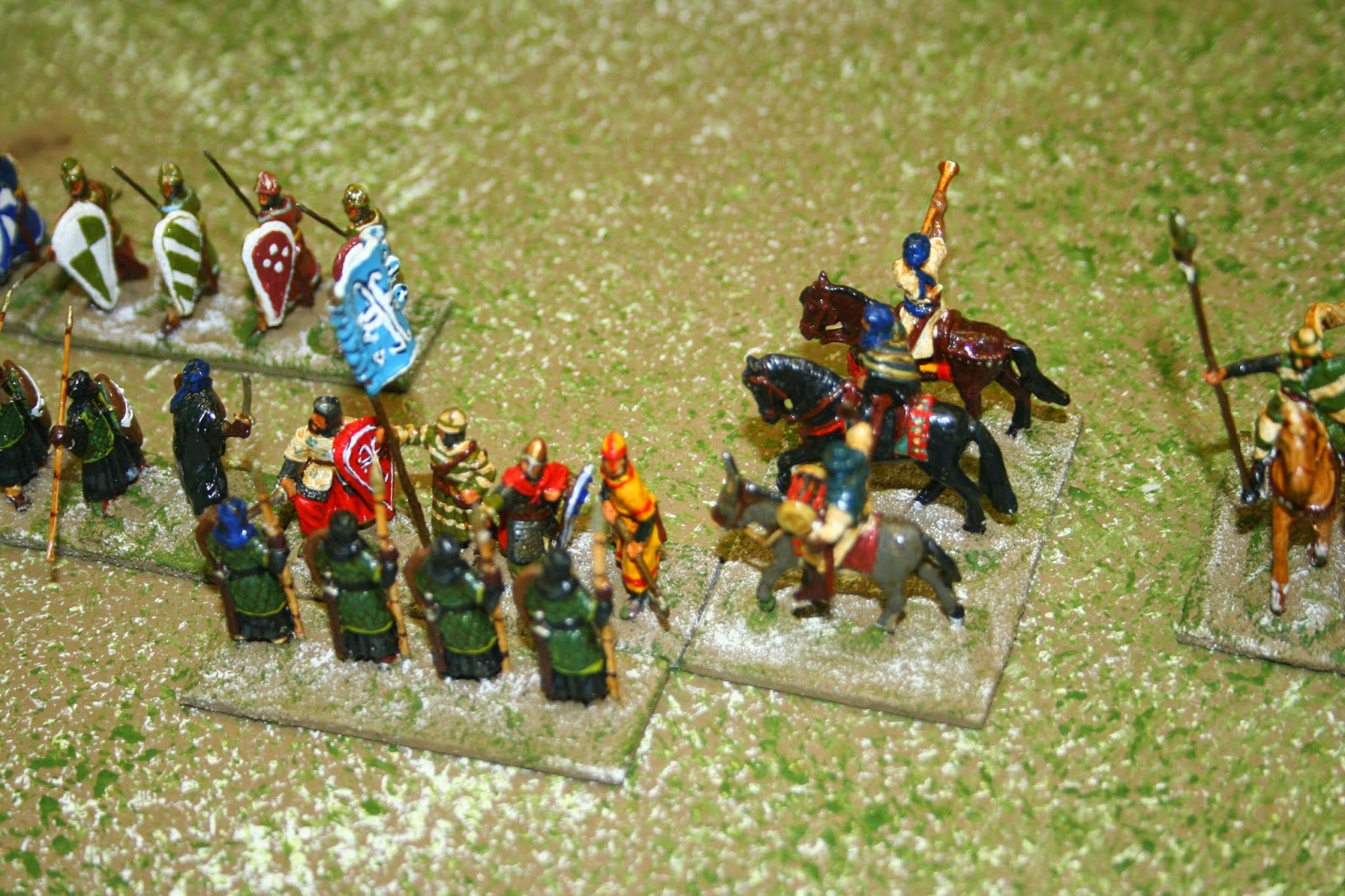 In my turn I have just enough PIPs to turn my General into the flank of his opposite number. He dies, game over. Win for the Murabits.

So, a game where I was comprehensively out-generaled by a superior army but I won it any way. How come? This table might make it all clear. 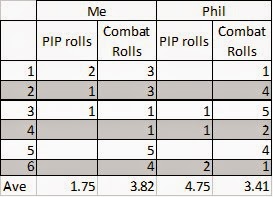 Yep. I kept a record of the die rolls in the game. Phil consistently out rolled me on PIPs, but I had him cold on the combat rolls. The averages are revealing, but the killer has the frequency I rolled 5s & 6s. Game to me through dumb luck.

How would we both fare when we swapped the armies over? 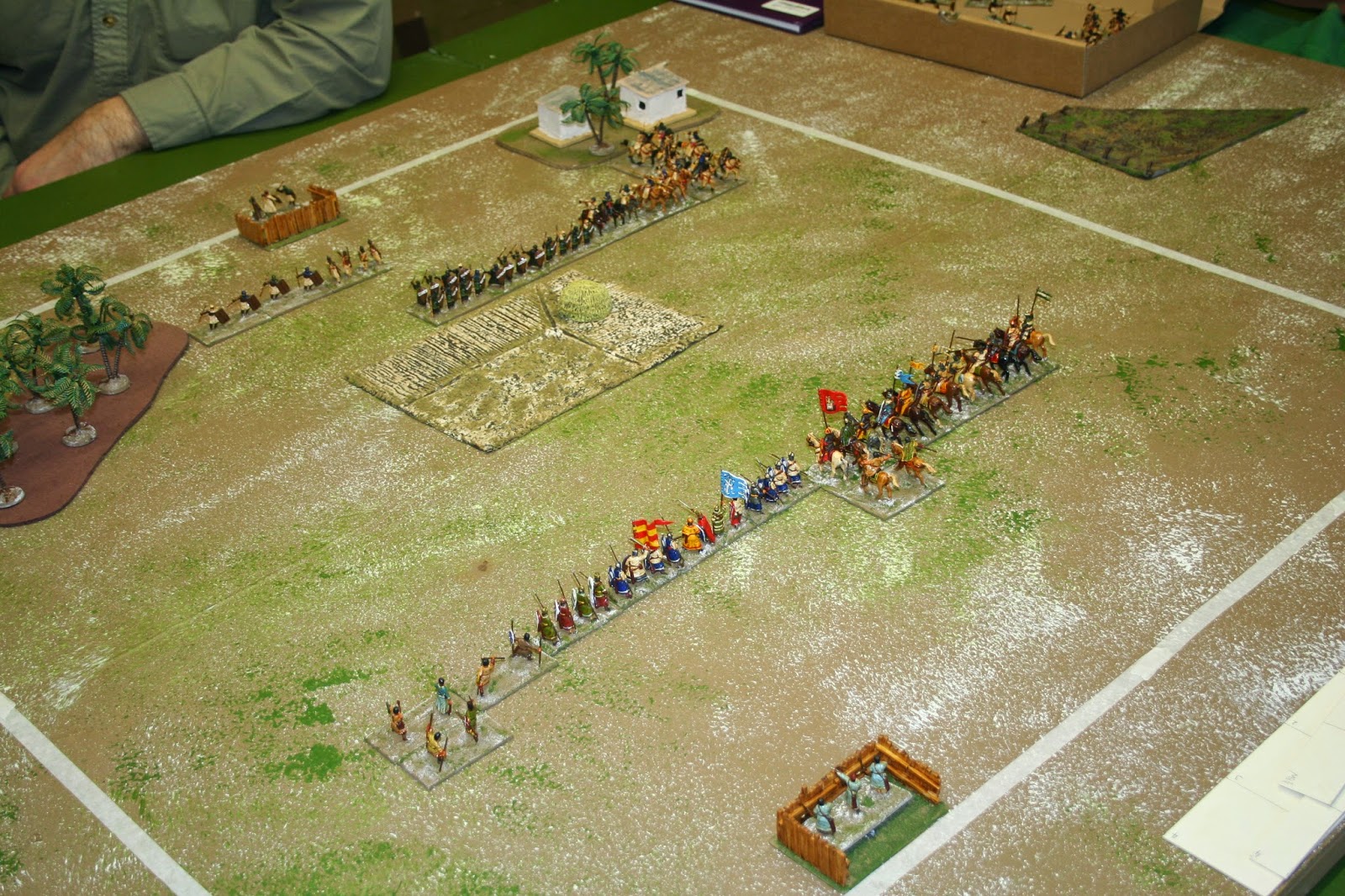 Again the Spanish were defending, so I had to deploy first this time. Not sure what my plan was. Hold the middle with my infantry whilst crushing his flanks with my superior cavalry, probably. Why is that Light Horse unit in the middle? 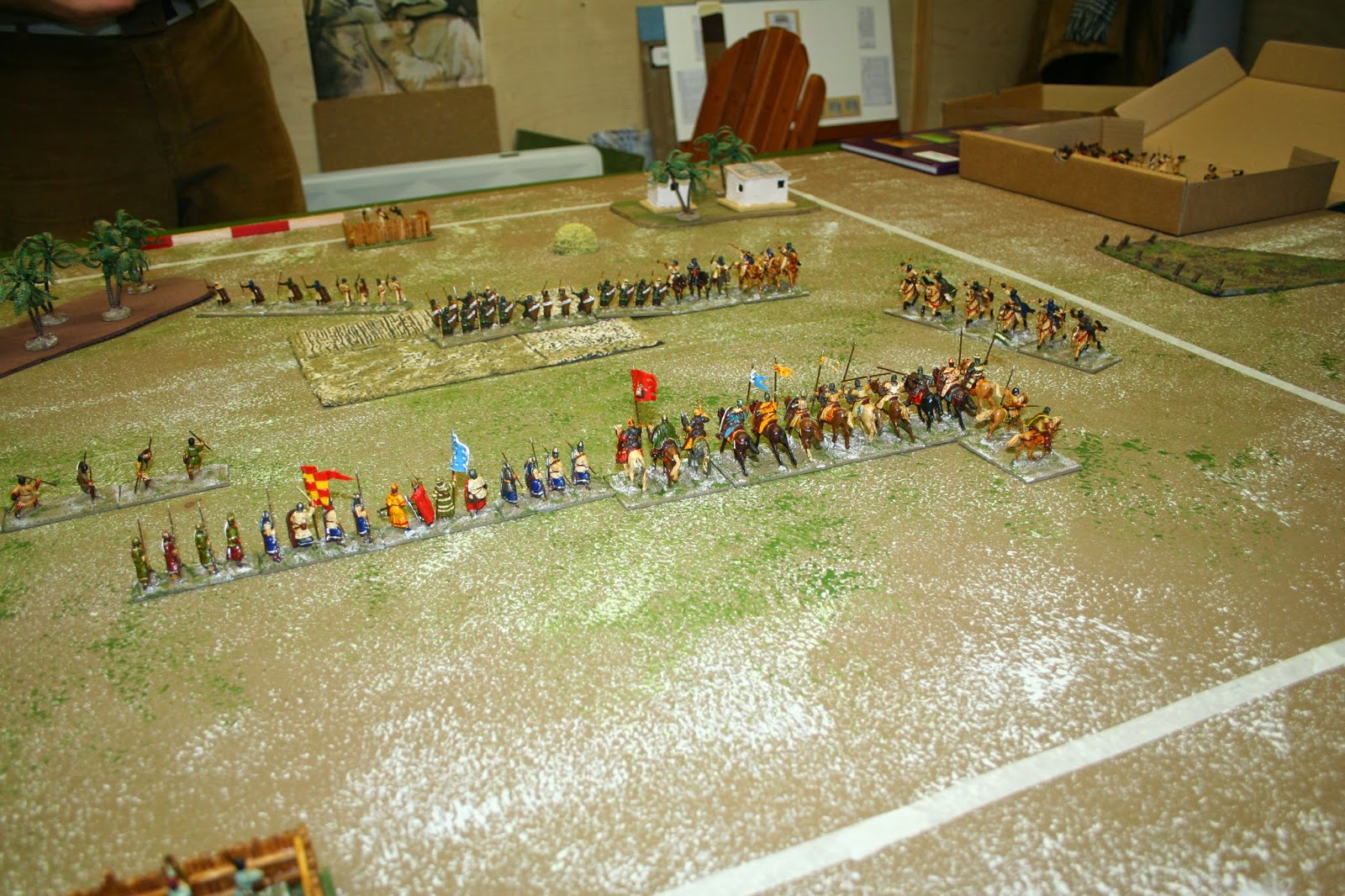 I think I had a 3 for my first PIP roll. I sent my Psiloi off to occupy the wood and  transferred my Light Horse out to the end of my line. Phil, as usual got his Light Horse in a threatening position. 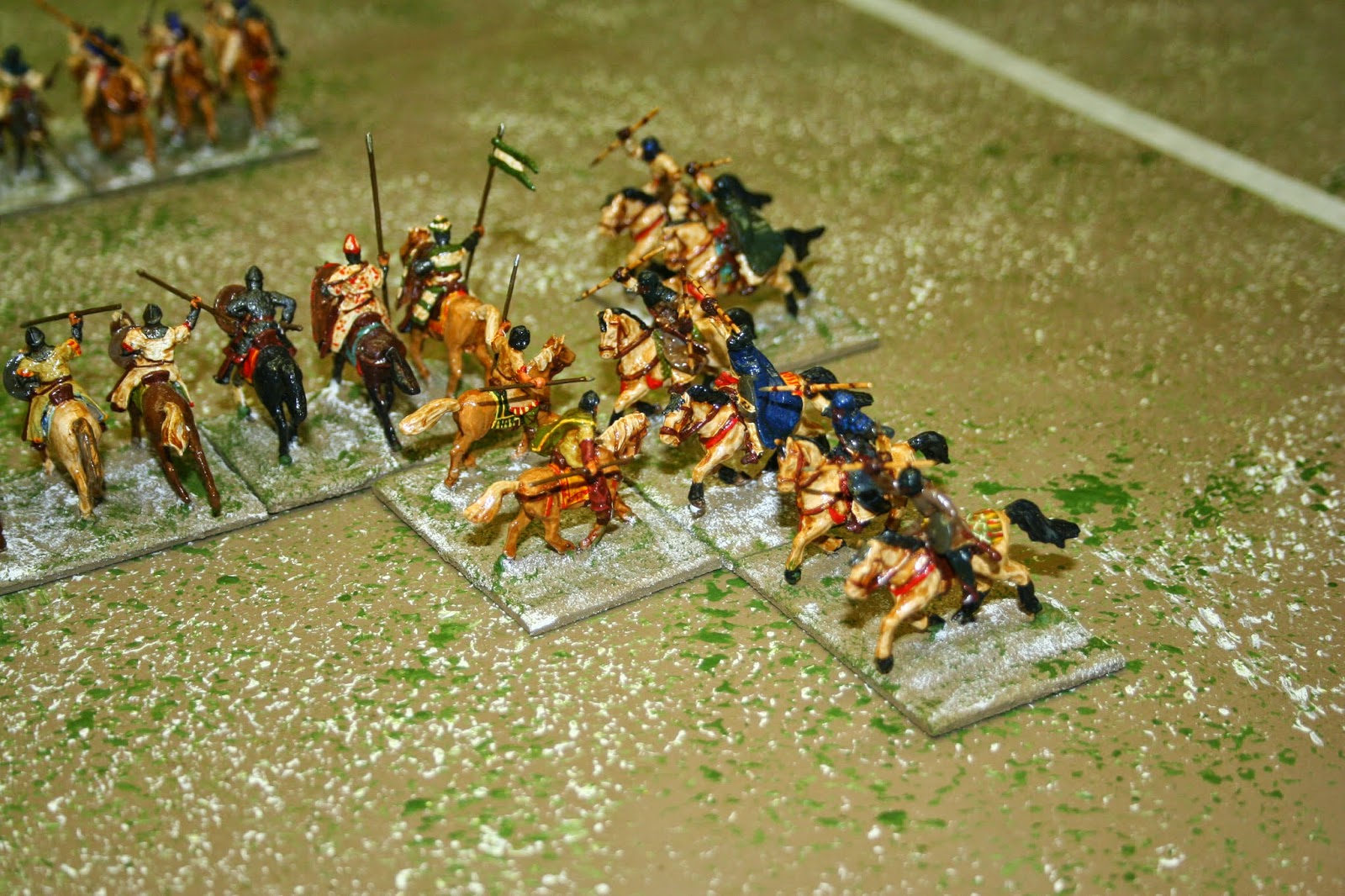 A PIP roll of 1 left me standing still pretty much, so Phil was able to sweep in upon my flank and hit my Light Horse. 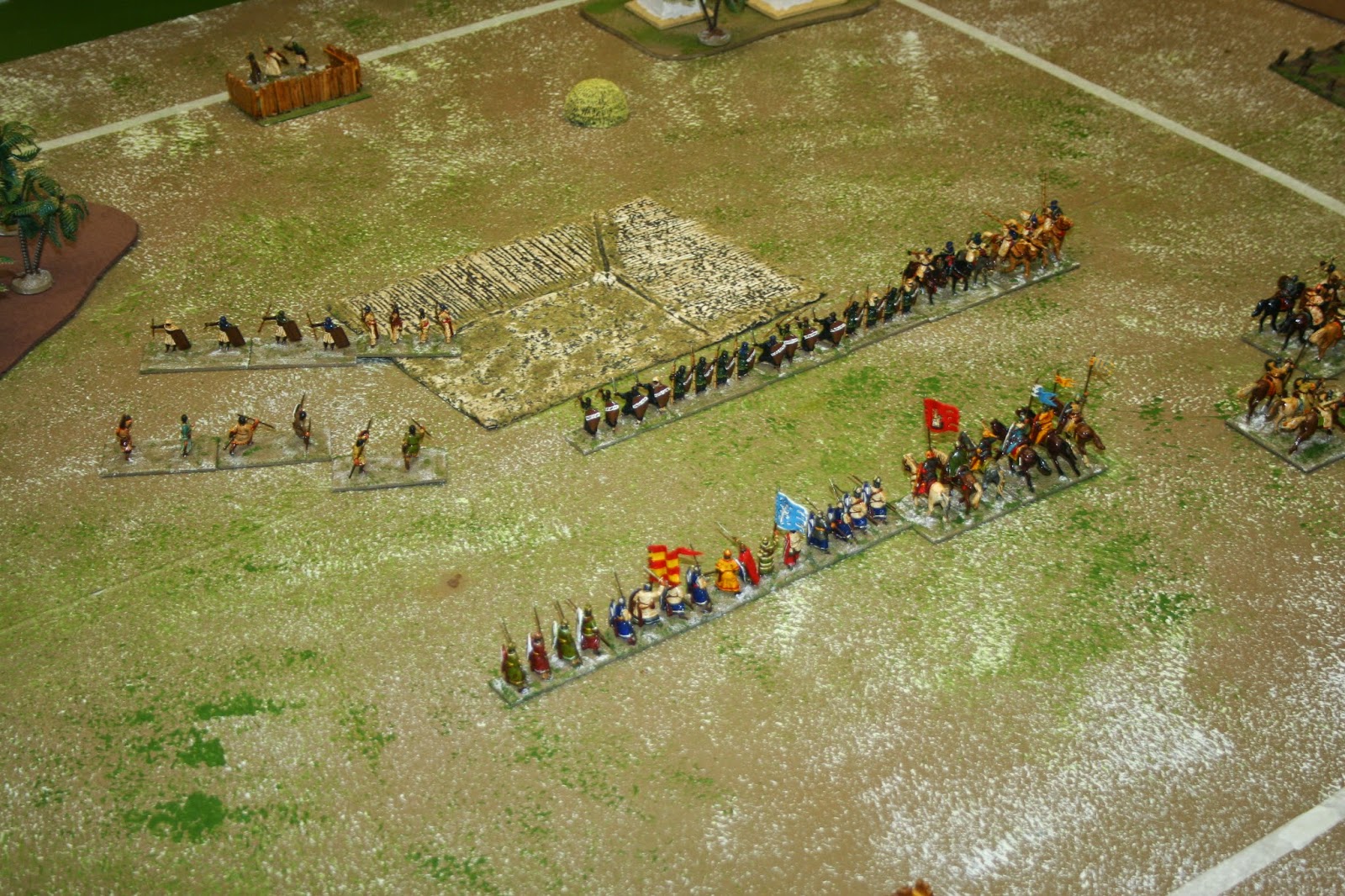 Although I lost the Light Horse I was able to counter attack with my Knights and Cavalry. This drove the Light Horse off and inflicted a casualty too. My attempt to close with Phil's Psiloi/Archer unit was frustrated  by a push back result (NB We didn't realise until after the game that Phil has an illegal army. He can't have the Knight unit and the Archers). 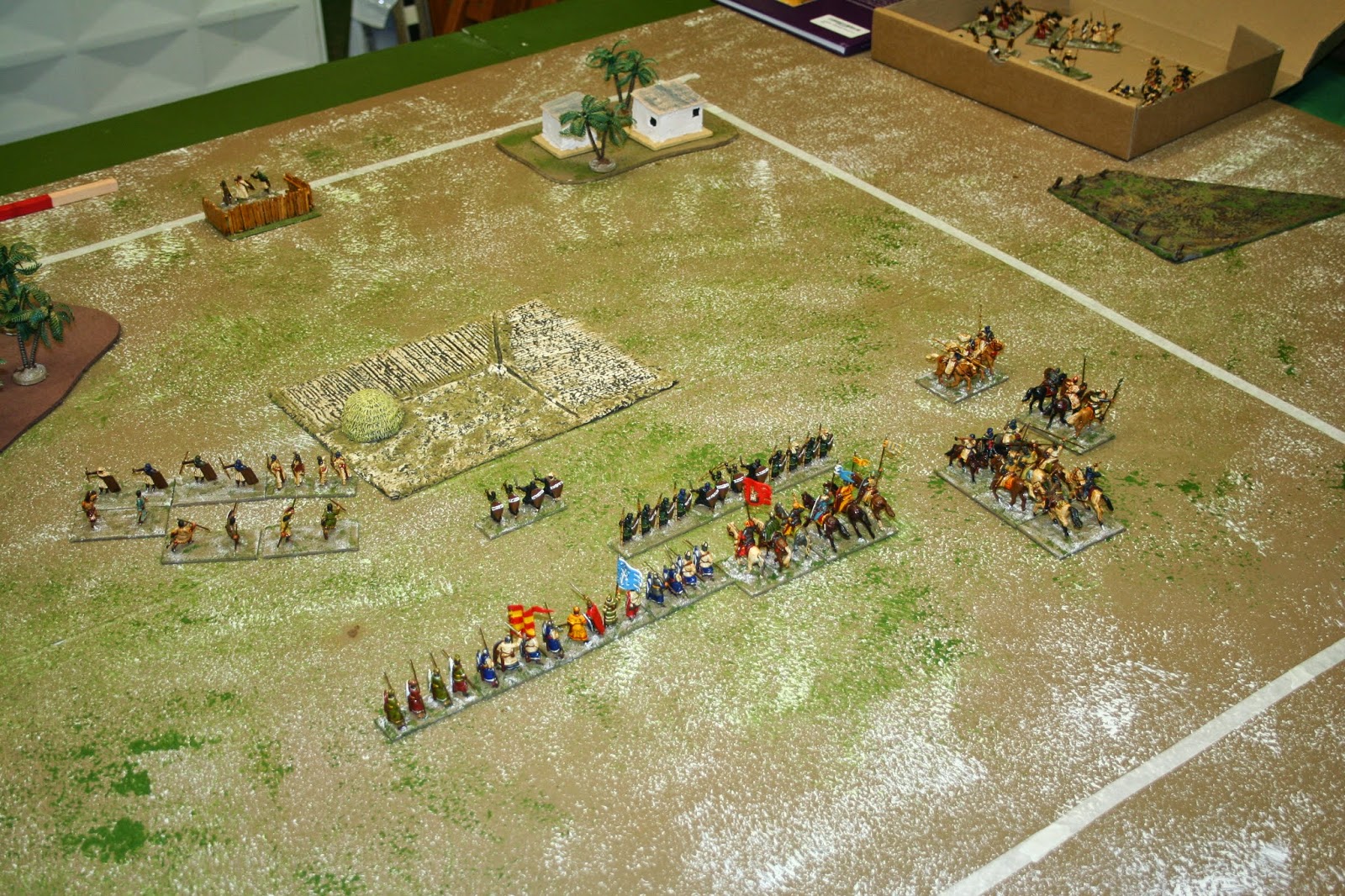 My right wing looks a bit of a mess now. Phil's general is in there, Light Horse round my rear. What a mess.

I'm missing some pictures of the action in the middle. I closed with everything I could, and drove Phil back, inflicting some damage. Phil killed off my Cavalry unit and piled into the back of my Knights in the main line. These died. Looking dodgy. 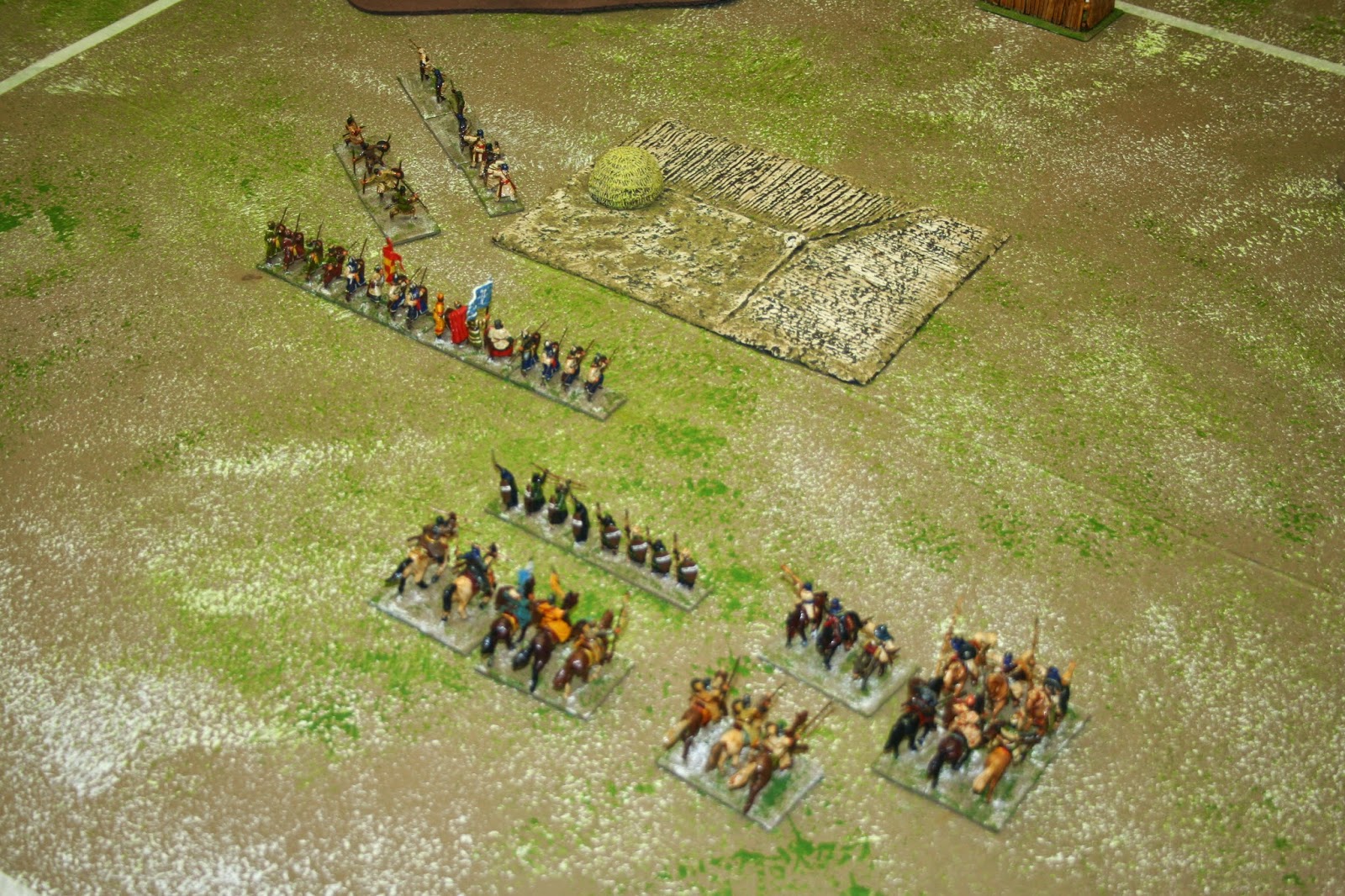 Then it was all over. A couple of good rolls and I've cut up Phil's spears and won the game.

Another win for me, and a win for the Spanish. So what does the Dice Table tell us? 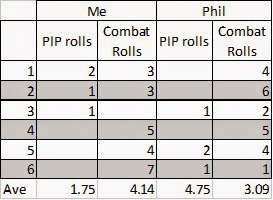 Even clearer than the last game. Doesn't matter how useless you are, if you get good combat rolls you can get out of almost anything. I had the same spread of PIP rolls as in the previous game, so I was again very passive.

I've never done such a thorough analysis of dice rolls in a game before. Not all games lend themselves to this type of analysis anyway. What's more, not all die rolls are equal. A 6 is much more useful when opposed by a 1, than a 5, for example. And you can get away with rolling a 1 if you're not fighting in a 2:1 combat. Sometimes a 1 is all you need for PIPs.

I also have to say that normally Phil beats me, so I think these games aren't a true reflection of the game. I was very lucky.