Battle of Sentinum 295BC

Our post Christmas game this year was another epic AMW refight. This one was a bit of a departure in period & armies, - early Romans v a Gallic/Samnite coalition.

My main source for the game was Sabin's "Lost Battles". However simply translating this directly into AMW troop types would make the game a walkover for the Romans as half the Gallic/Samnite army is warband in light armour and it would be facing legionnaries in medium armour.

I felt that at this stage of development the armies would be closer together in terms of equipment, so I drew the armies up as follows:

A slight numeric advantage to Gellius' men, but otherwise not too badly balanced. I set a break level of 6 remaining units for both sides. 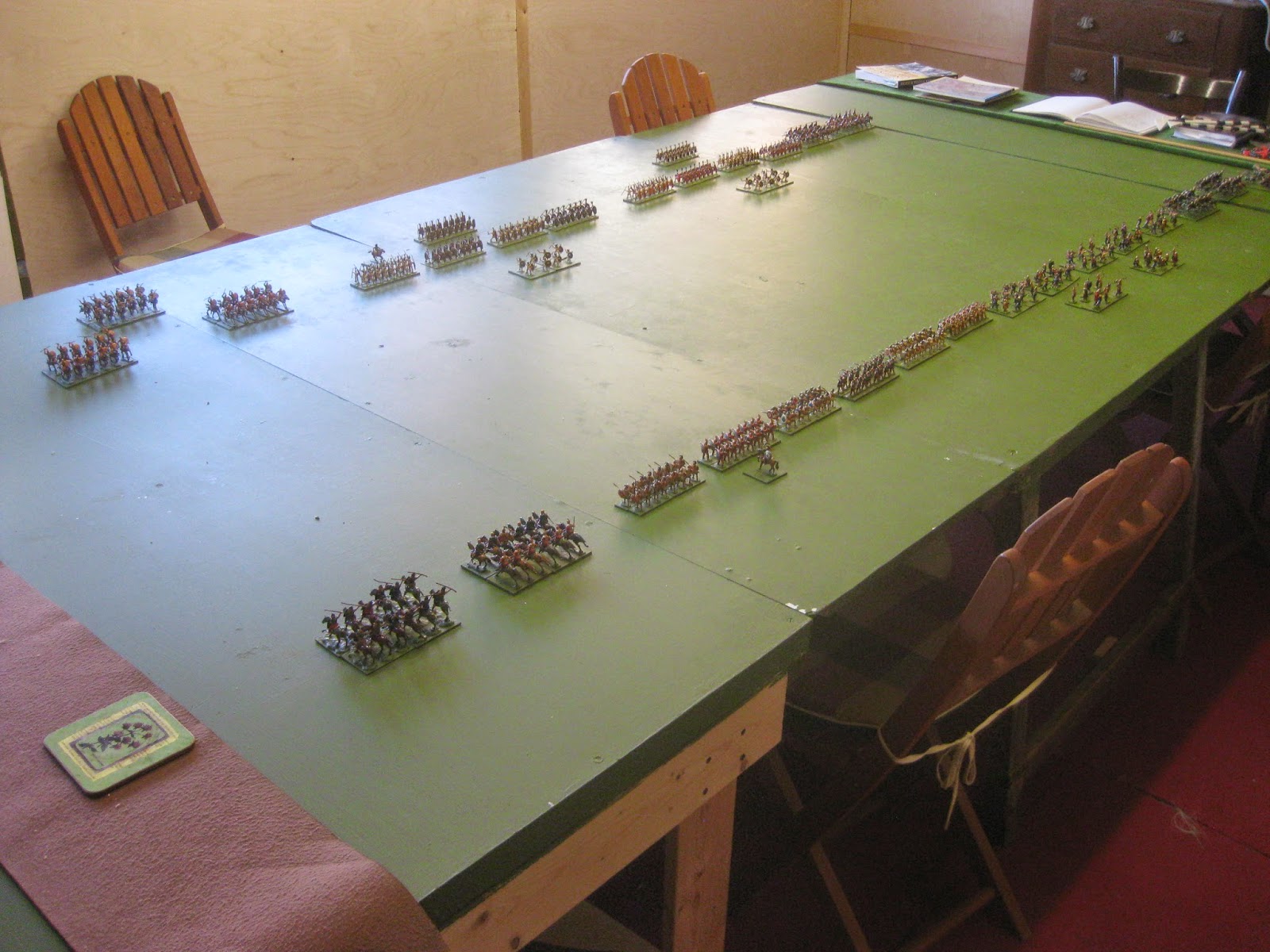 The initial deployment has the Romans at the top, furthest away from the camera. For the coalition the Samnites are on the left and the Gauls on the right. On the Roman right they have three heavy cavalry facing two similar Samnite units. On the other flank there are two Roman cavalry units facing two Gallic units and the chariots.

Will & I took the Romans, and Phil the coalition. I had the left flank with the uninspiring Decius. Decius is the least imaginative of the two commanders, so it was best for the game that I played him "in character" as that also allowed me to umpire when needed. 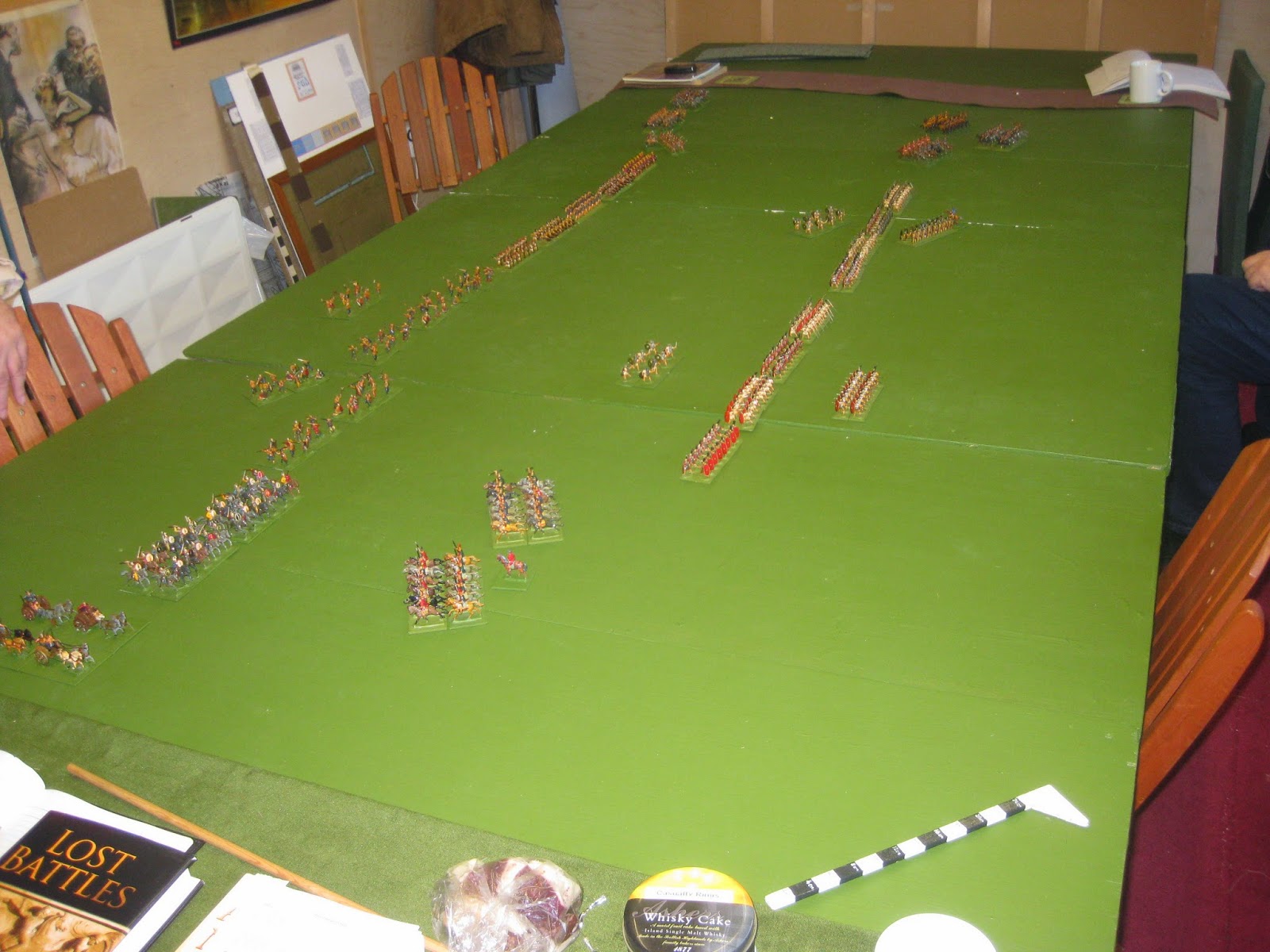 In the opening move of the game I fearlessly lead my cavalry forward to attack the opposing Gauls. My aim is to hold this flank up long enough to enable my infantry to get to grips with the warband. 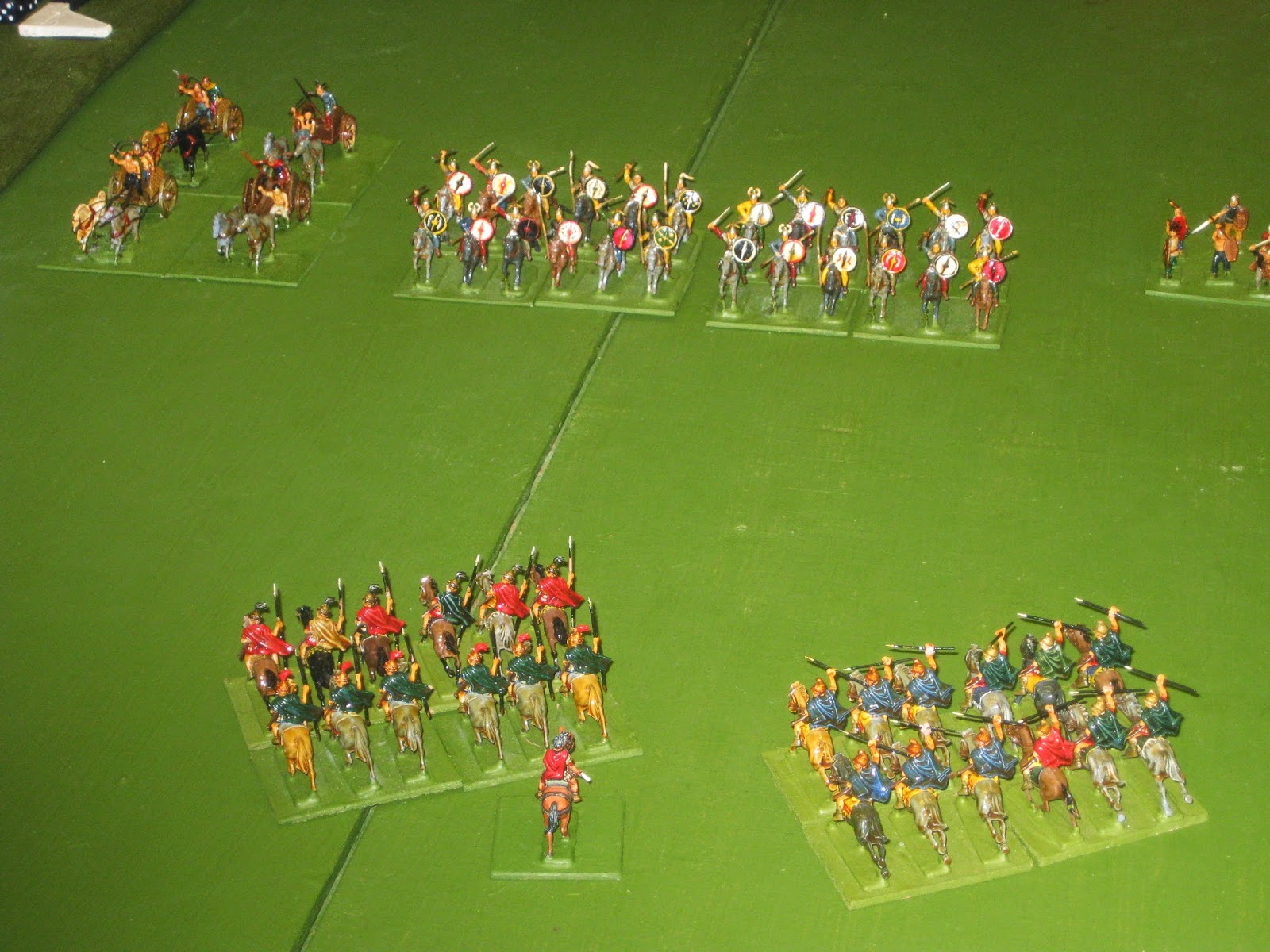 This is the first time we've used this type of light chariot in AMW, so they were a bit of an unknown quantity, - pretty much as in the real battle. I hoped the presence of Decius with his re-rolls would offset the numerical disadvantage slightly. 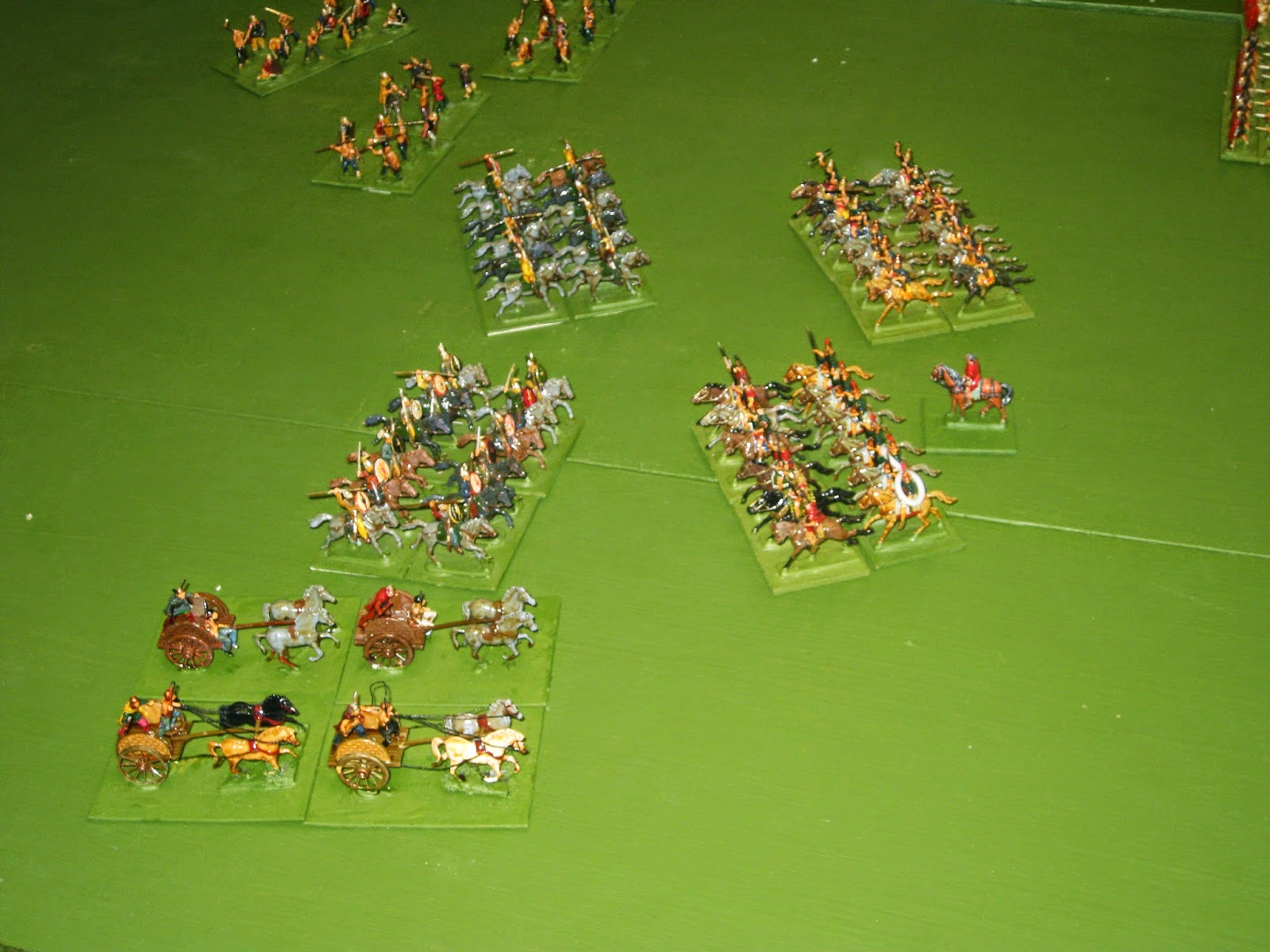 Phil moved the chariots up to throw javelins at me and got a couple of hits, whilst protecting them with his cavalry. 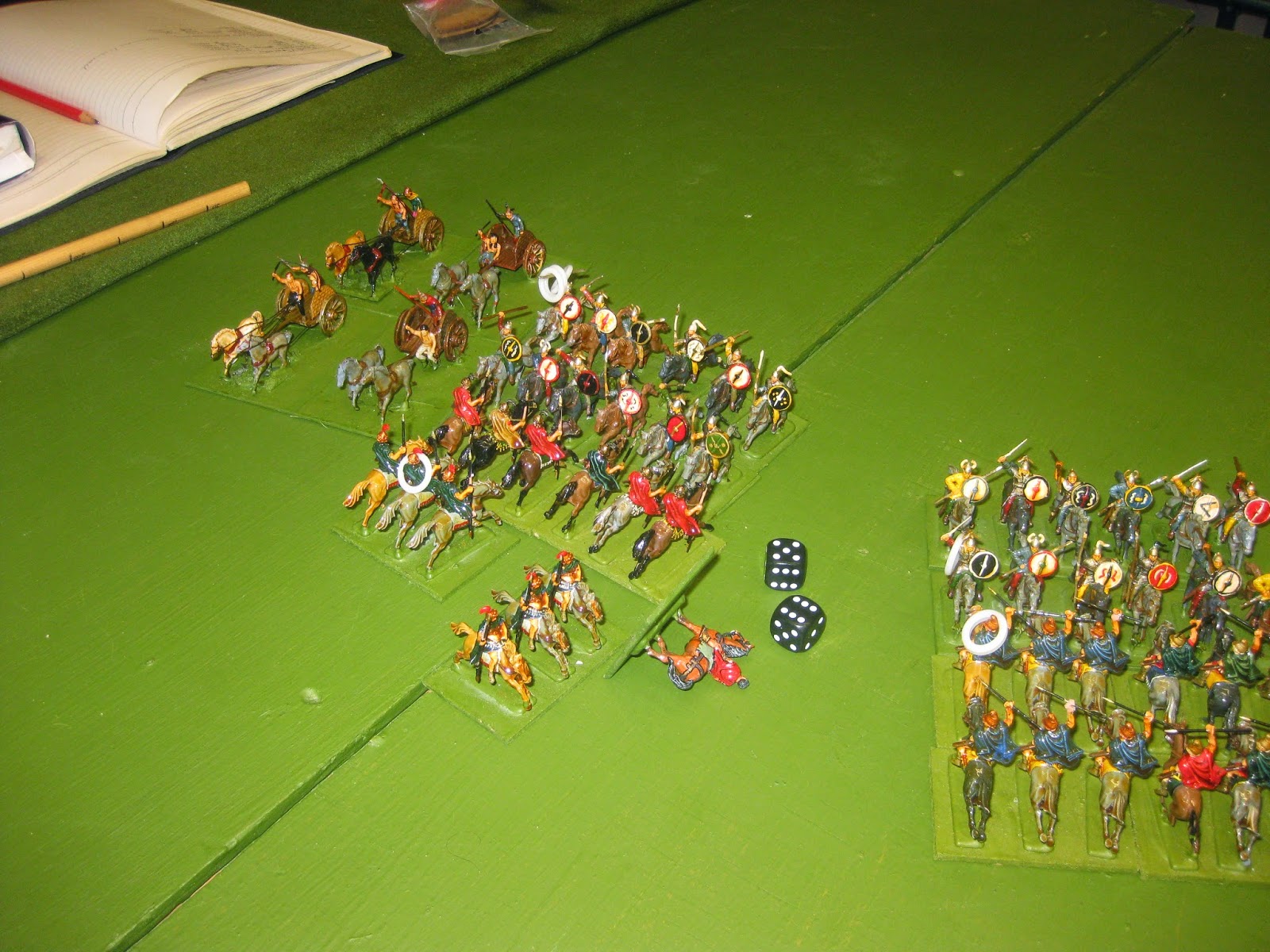 I therefore smashed into the Gallic cavalry and things unravelled in spectacular fashion. No saves, a base lost and then Phil rolls a kill roll on my Consul. Three moves in and I'm dead already. In the actual battle Decius did actually die in a reckless charge - a "devotio" as the Romans called it, - so I can't complain*. 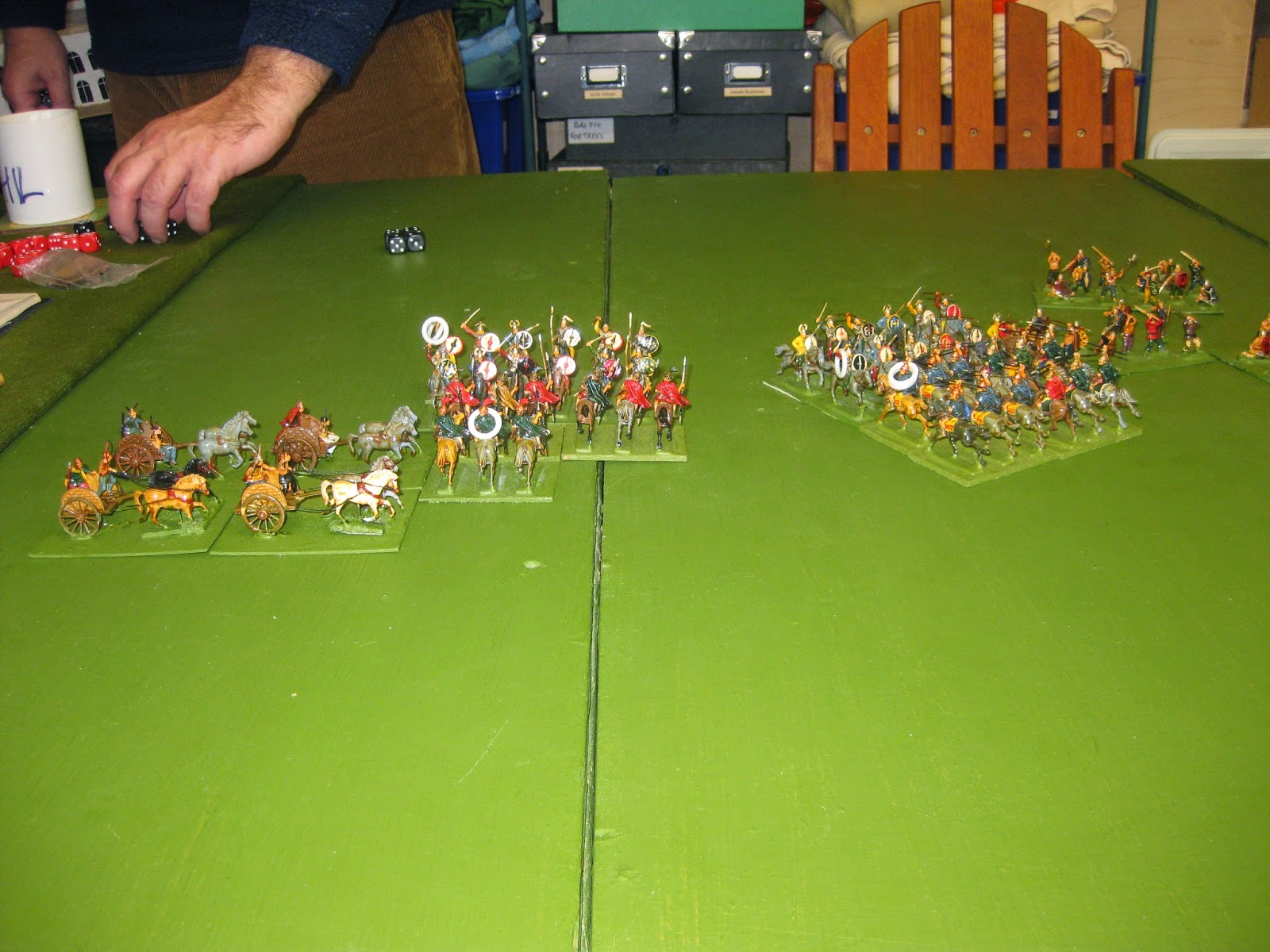 Phil then swung his light chariots into the flank of my outer most cavalry unit. This is probably the point at which it all started to go badly wrong. 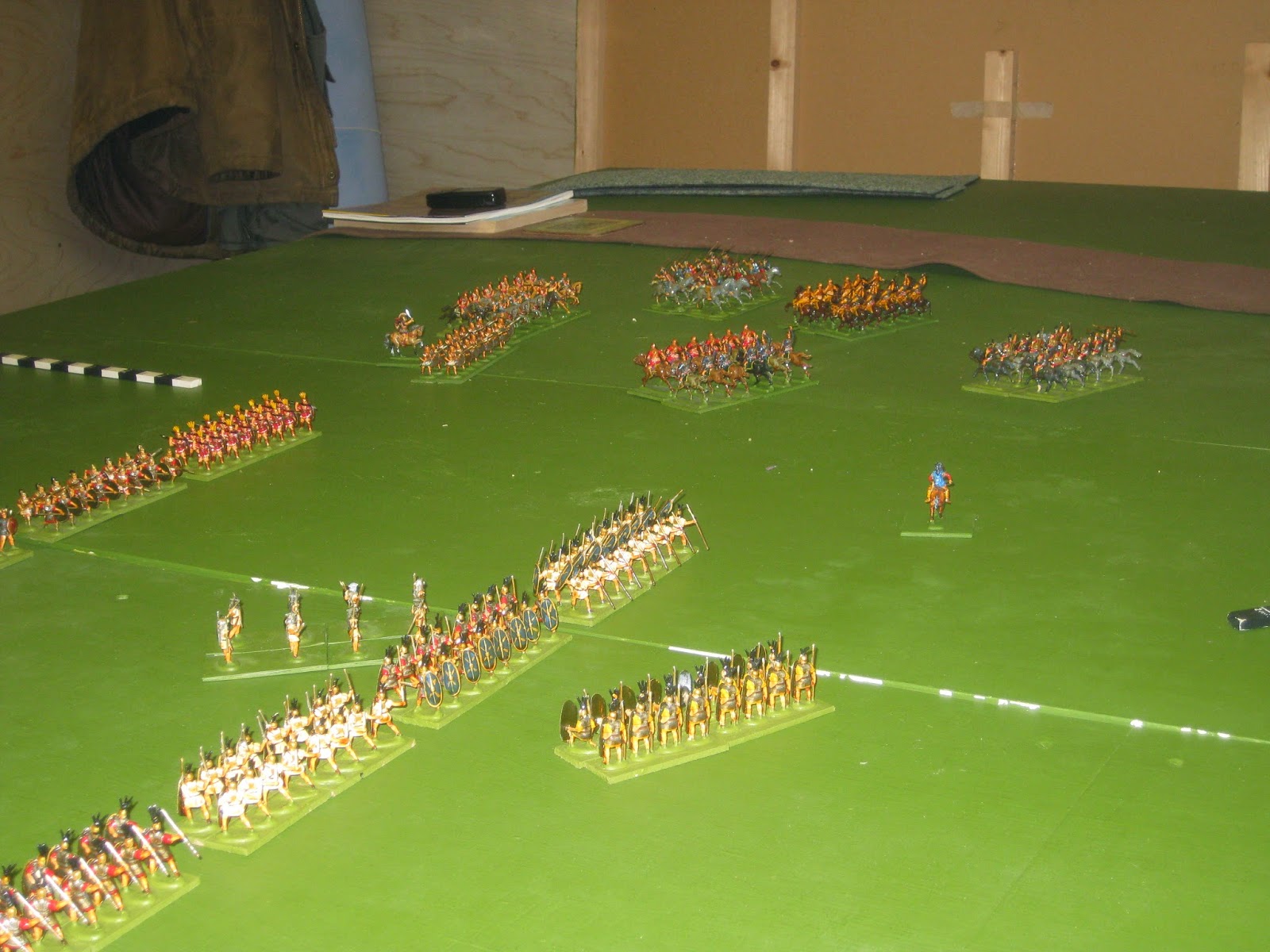 On the other flank Will had got himself a bit tucked up by the table edge, and was unable to bring his cavalry superiority to bear. Phil was crowding his manoeuvre space with a spare unit of heavy infantry. 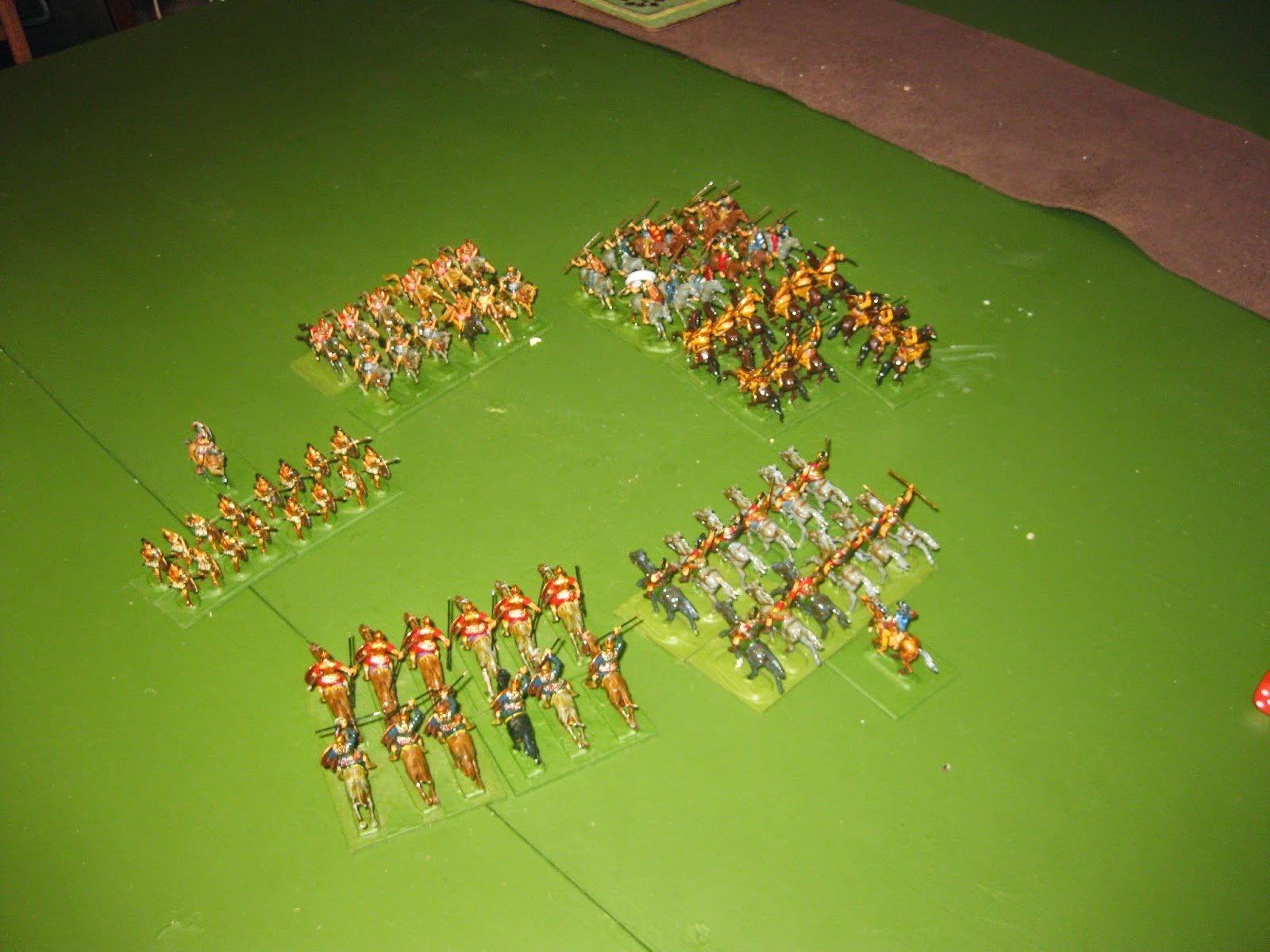 As you can see Will didn't have enough room to get round the open flank. I think Phil had shut it down a bit, but on reflection I think we should have had more room out here. 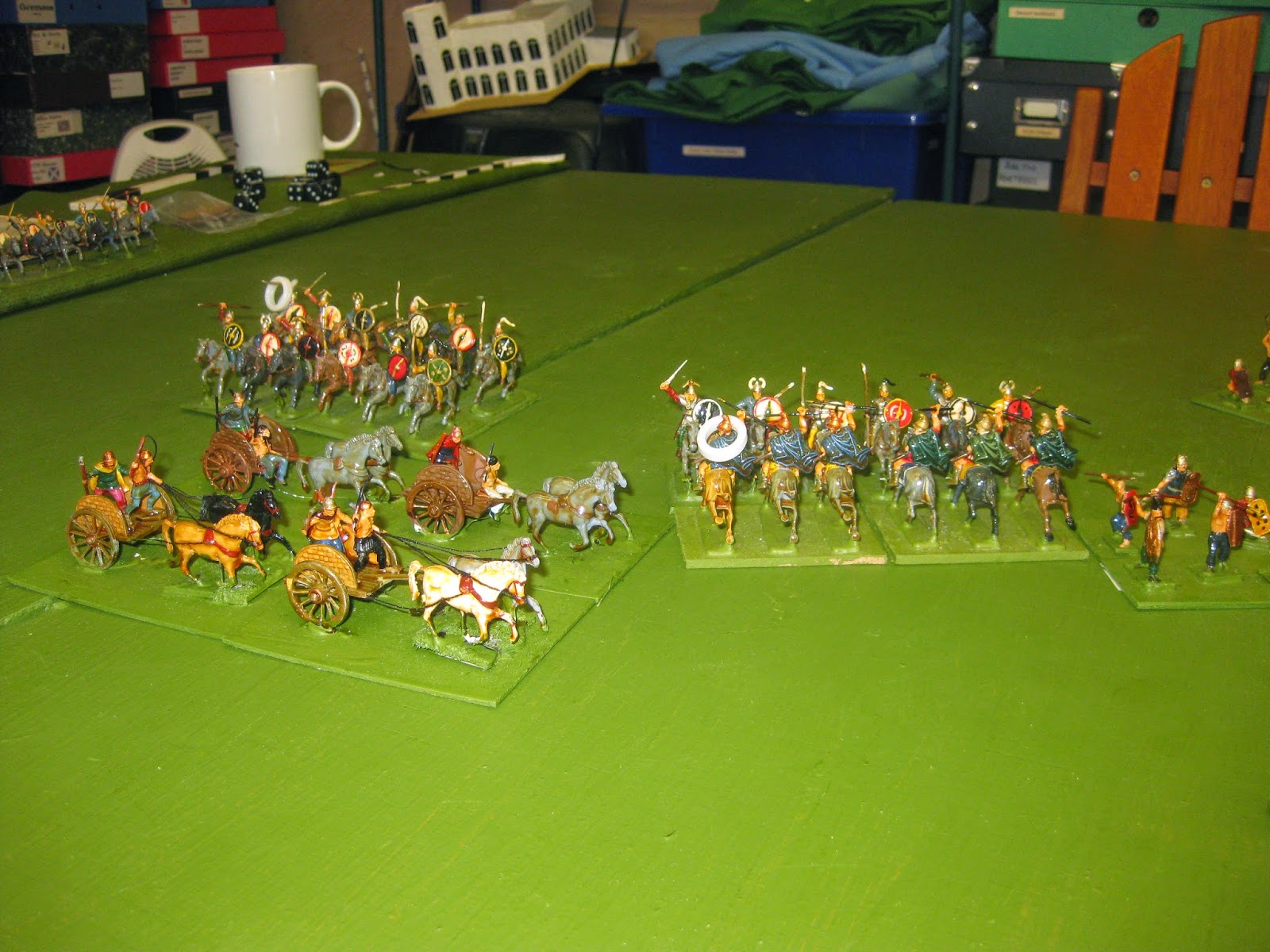 Having sorted out one of my cavalry units the chariots caught the flank of my other unit. This happened quite quickly and my attempt to shore it all up with my triarii was developing too slowly. 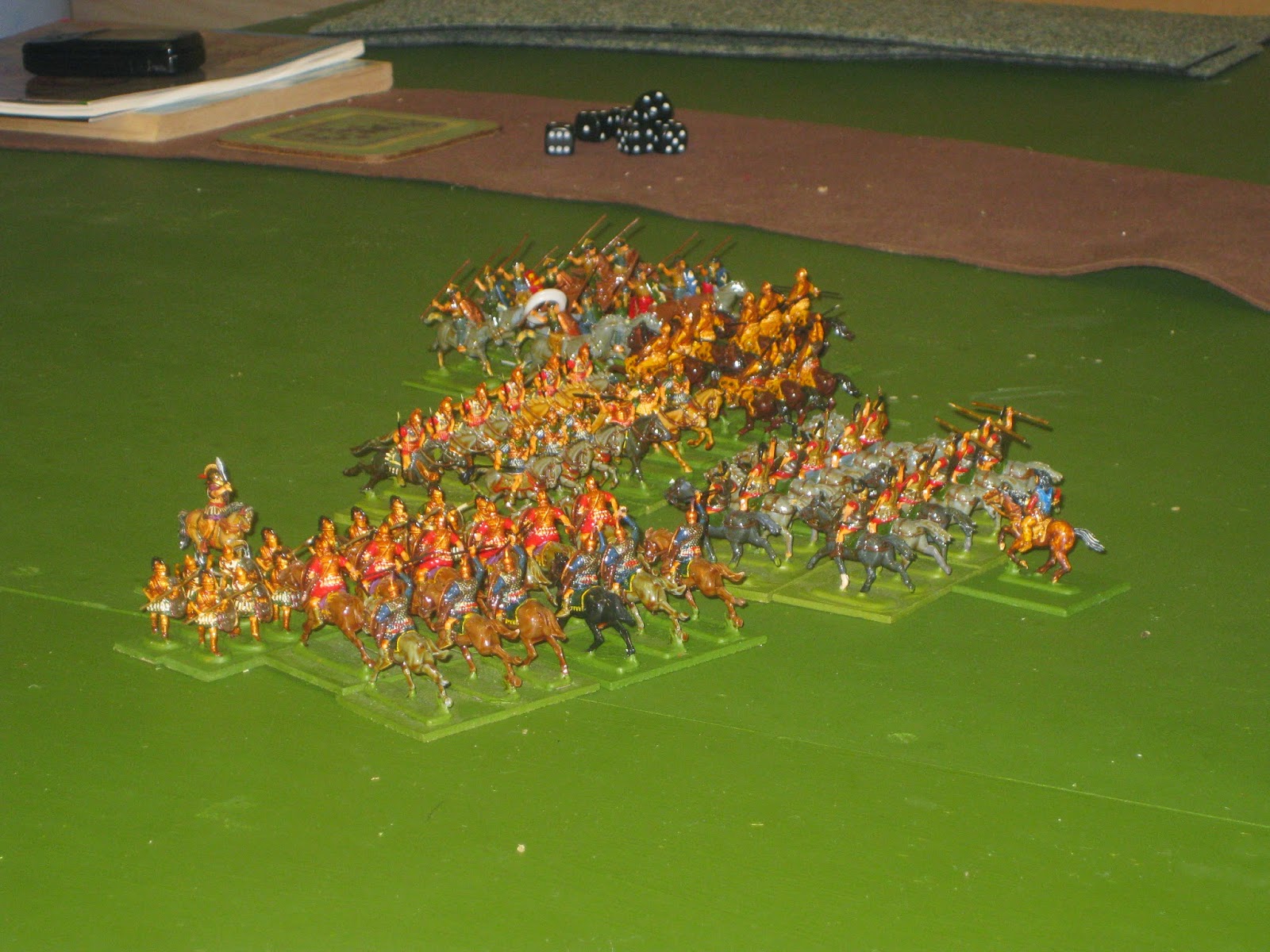 All of Will's cavalry was now engaged, and was generally suffering badly, despite the presence of his general in the thick of it. 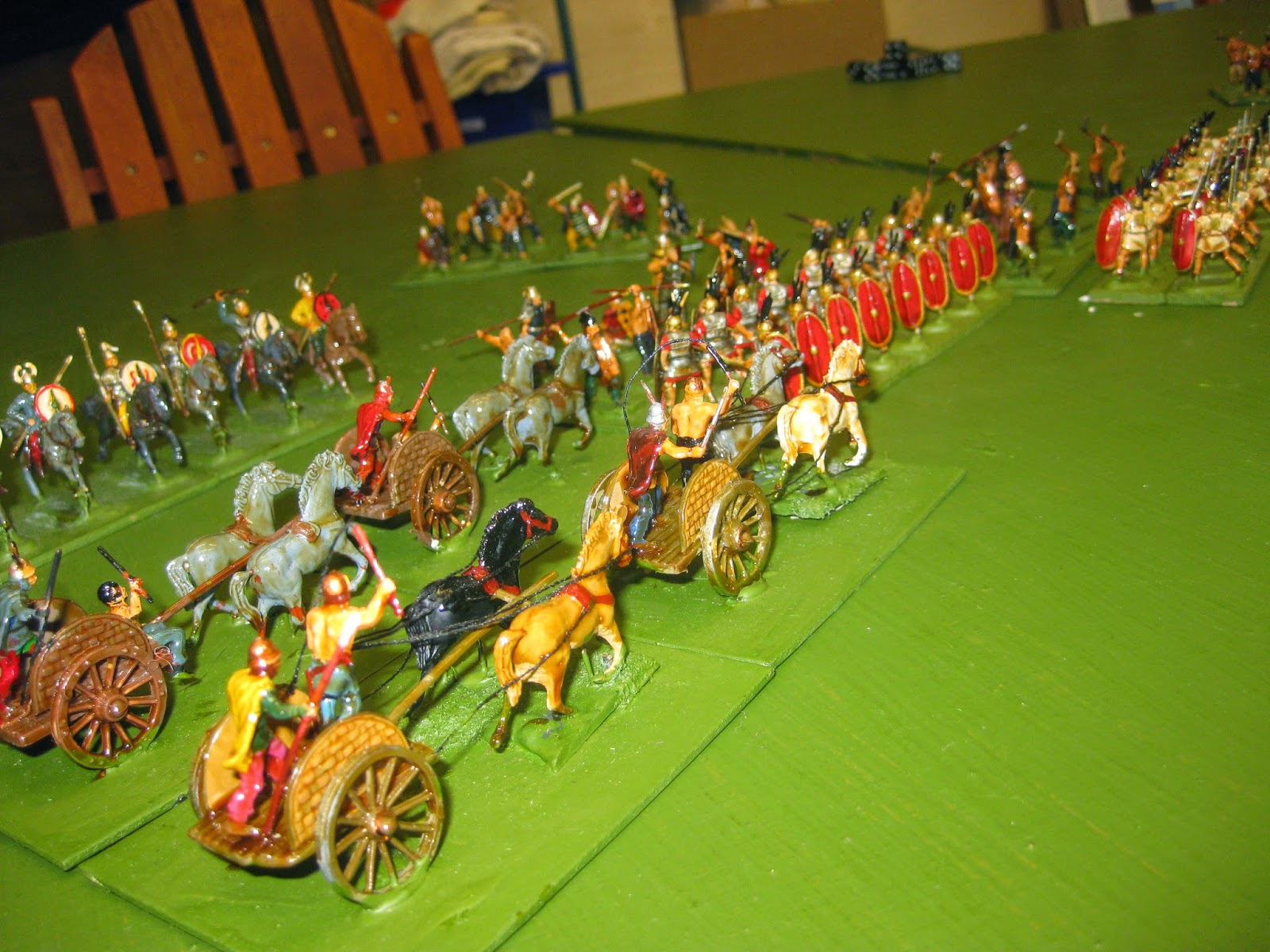 Another cavalry unit gone, and the chariots continue to roll up my flank. The key to Phil's success here is that all my units are simultaneously engaged to the front, so I can't turn to face. 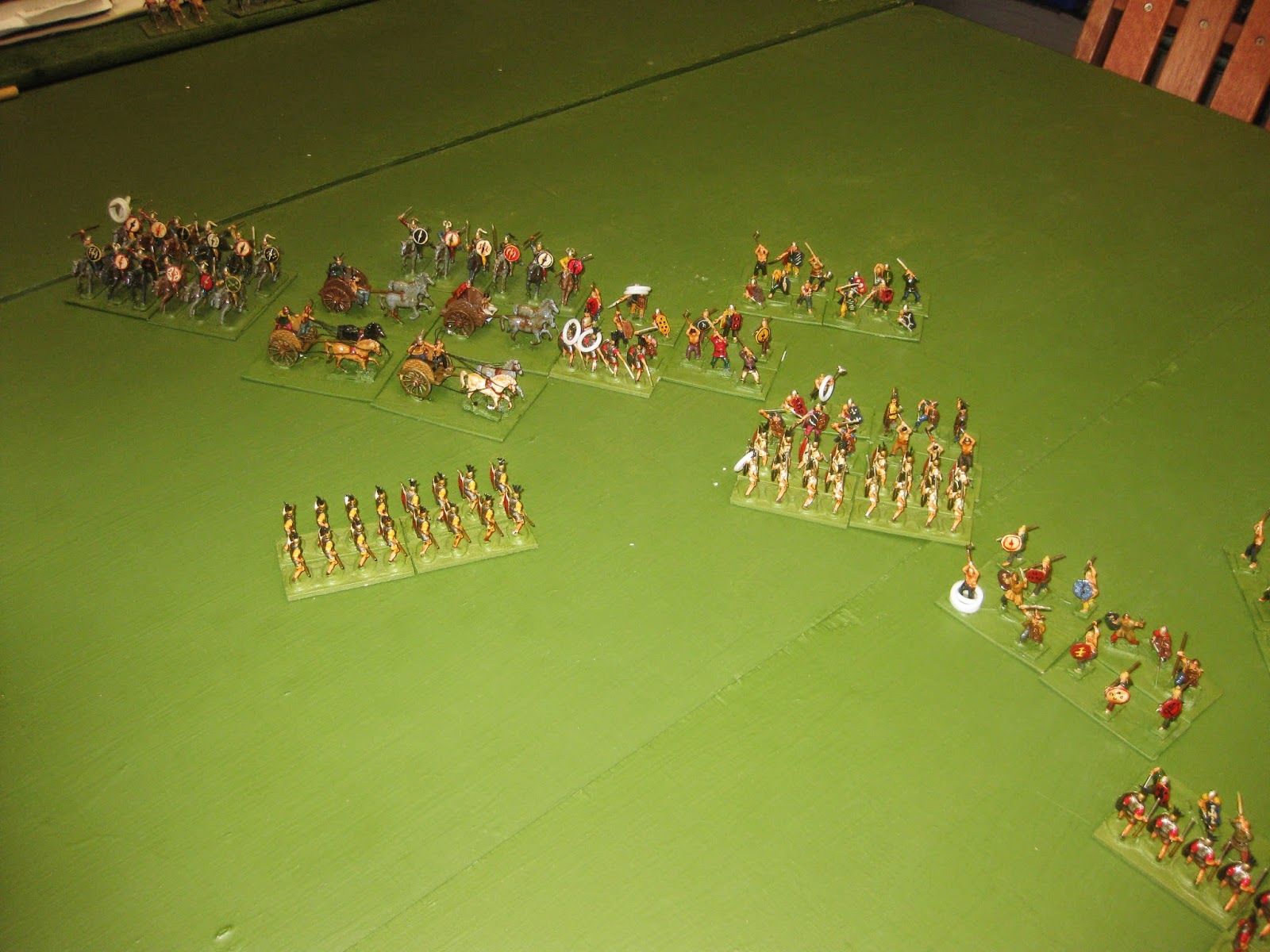 The triarii are making ground but the legionary unit I was relying on to hold the end of the line has just evaporated. 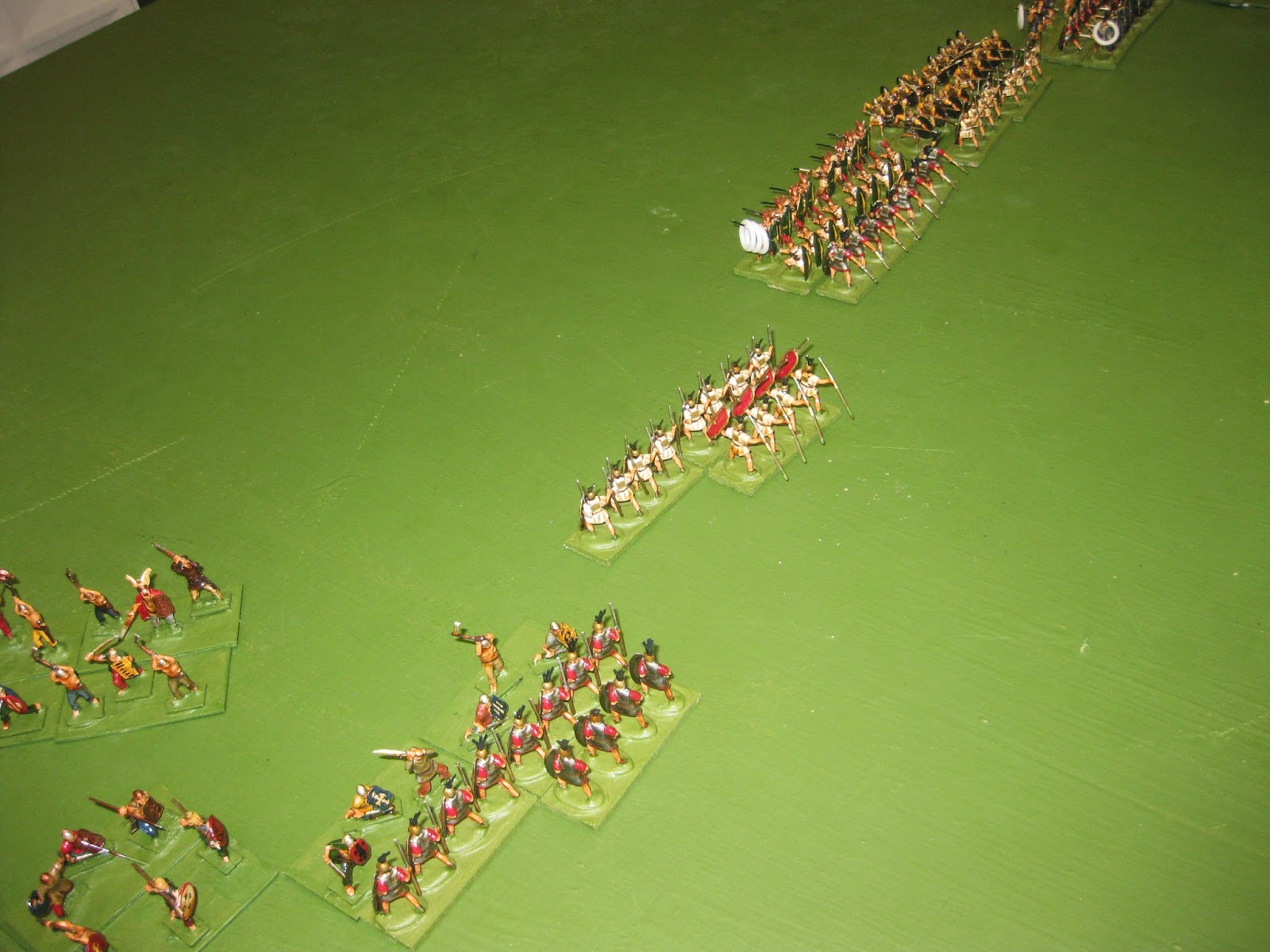 I've done a bit better in the middle, and have broken through the line of warbands, but it will take some time to exploit the opening. 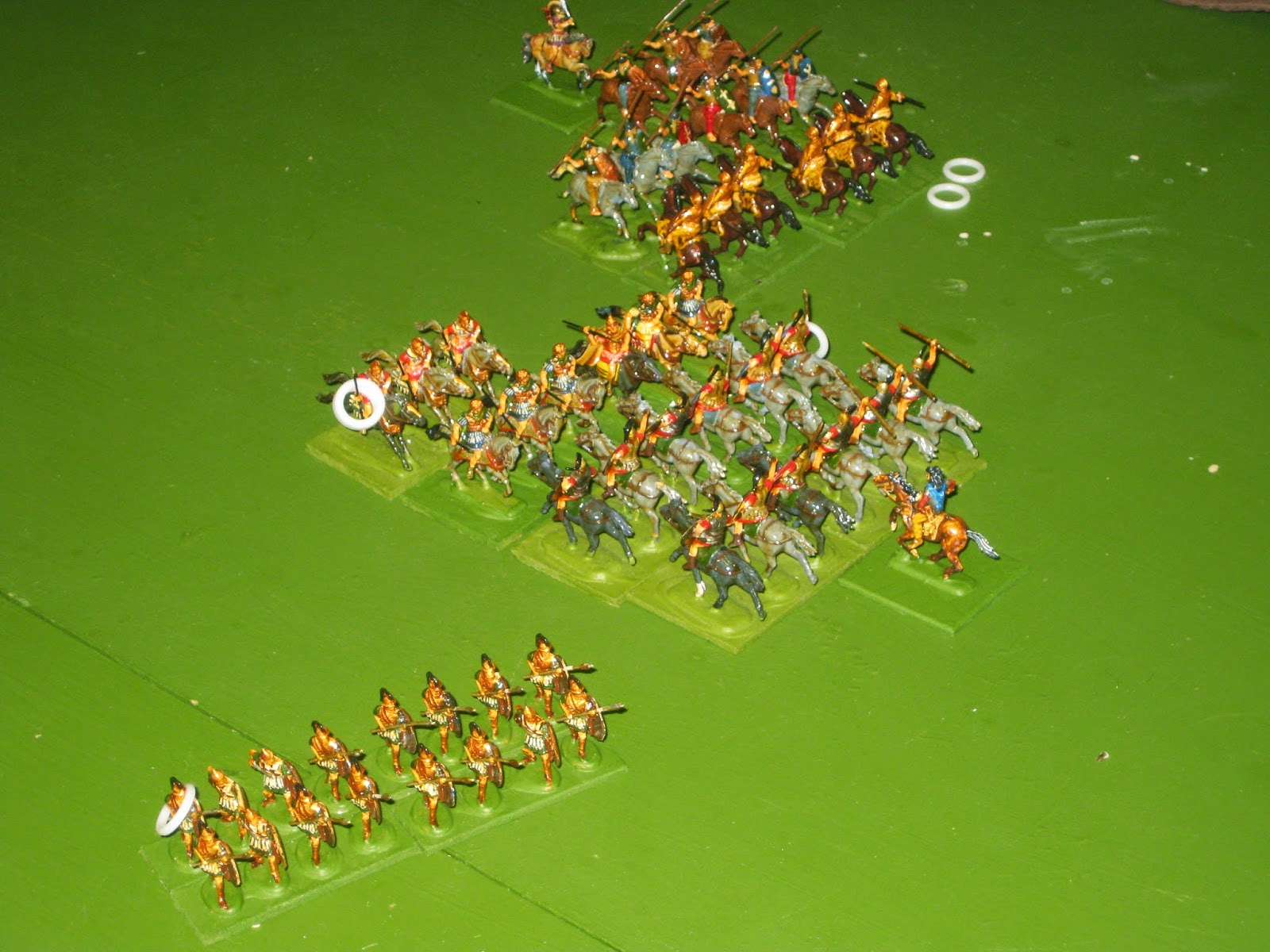 Will has lost a cavalry unit against the foot. His central unit with Fabius is gaining the upper hand, but more slowly than his right hand unit is being ground down, 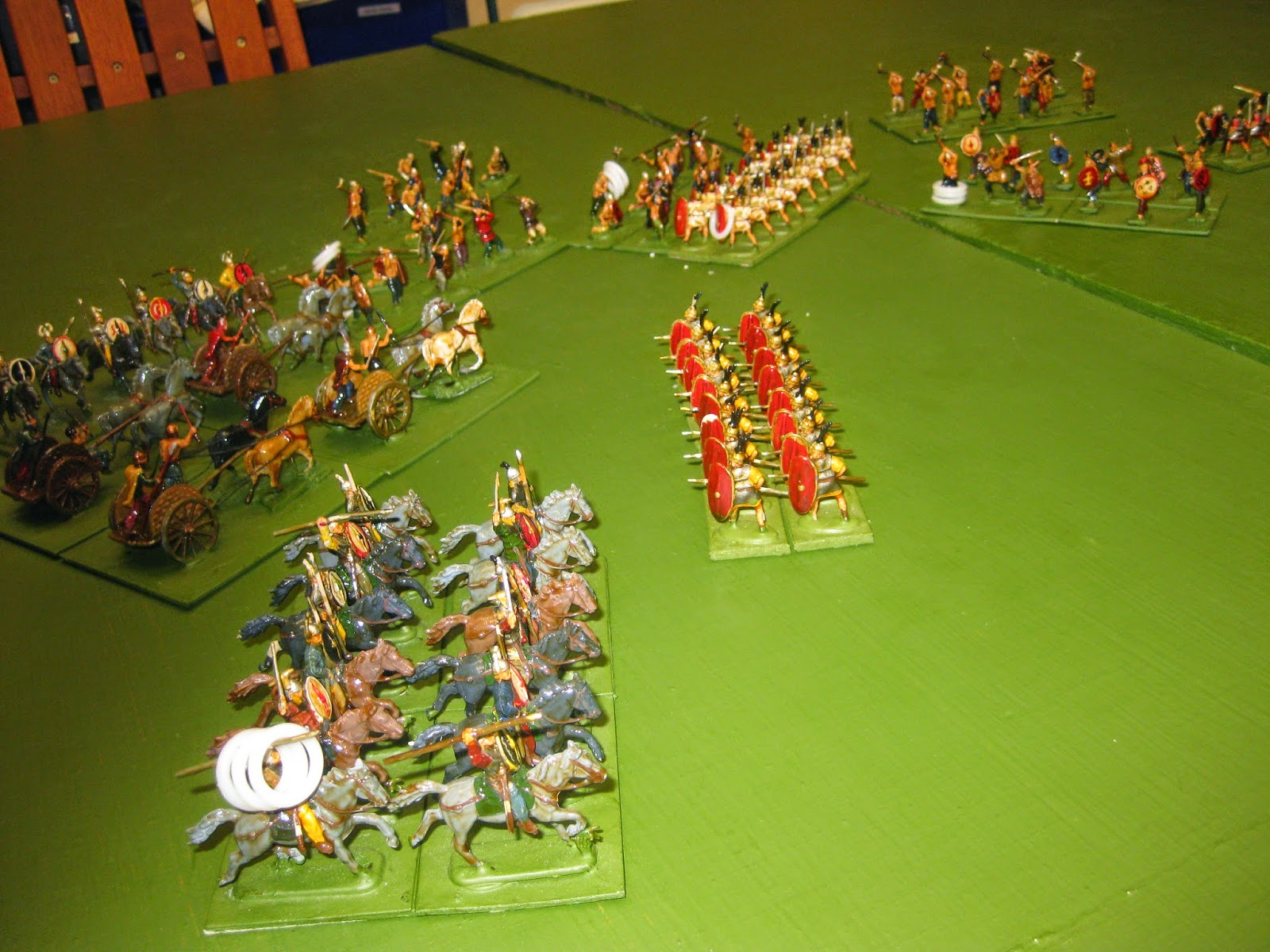 Phil has got some cavalry in place to protect the flank of his chariots, whilst he extricates them and brings up warbands to sort my triarii out. 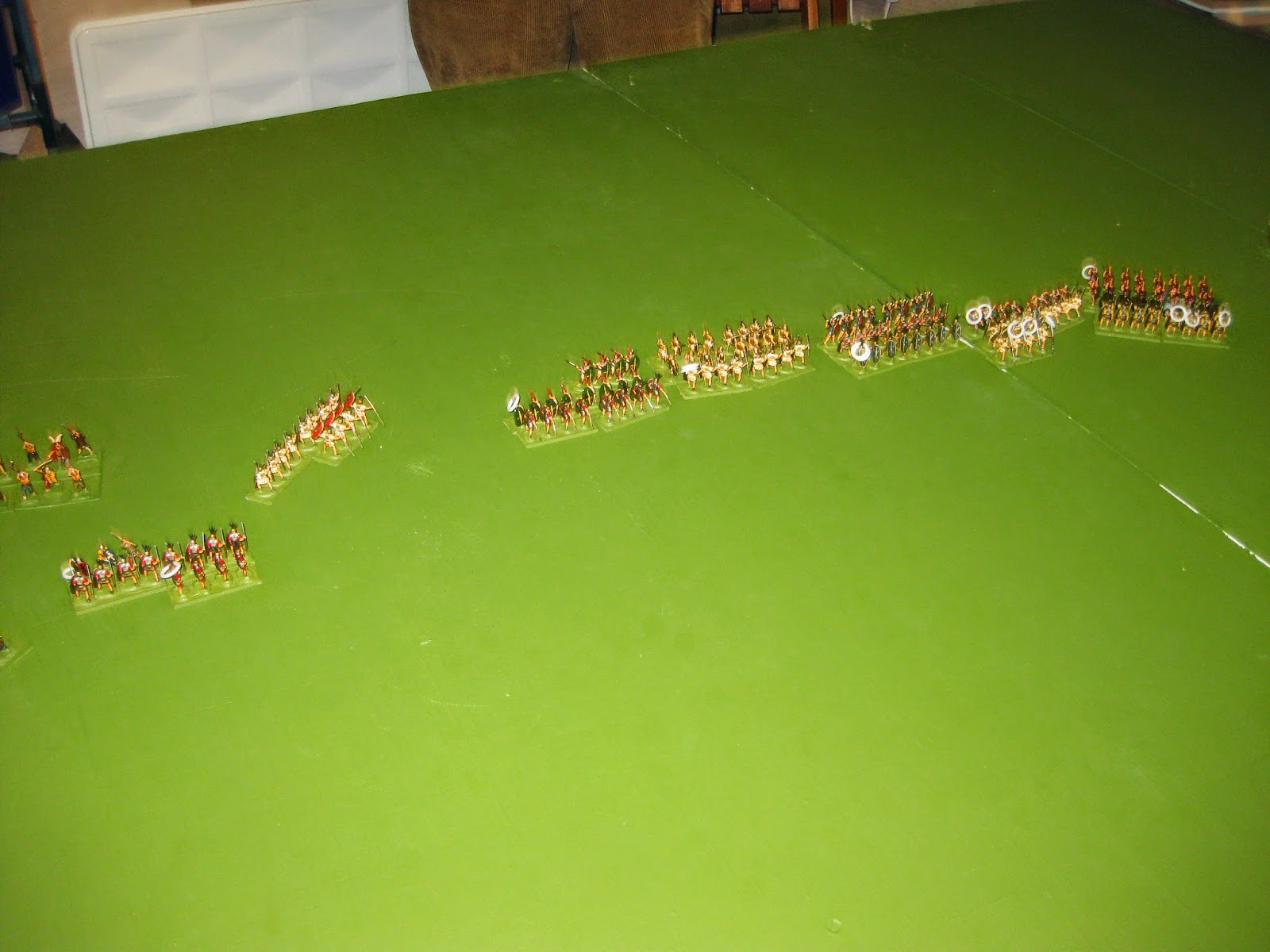 The centre is touch and go for both sides. My troops are breaking through to roll up Phil's right. Question is will it be quick enough? This was Phil's lowest point, - he took and failed 5 morale rolls in sequence. We still couldn't get a decisive breakthrough however. 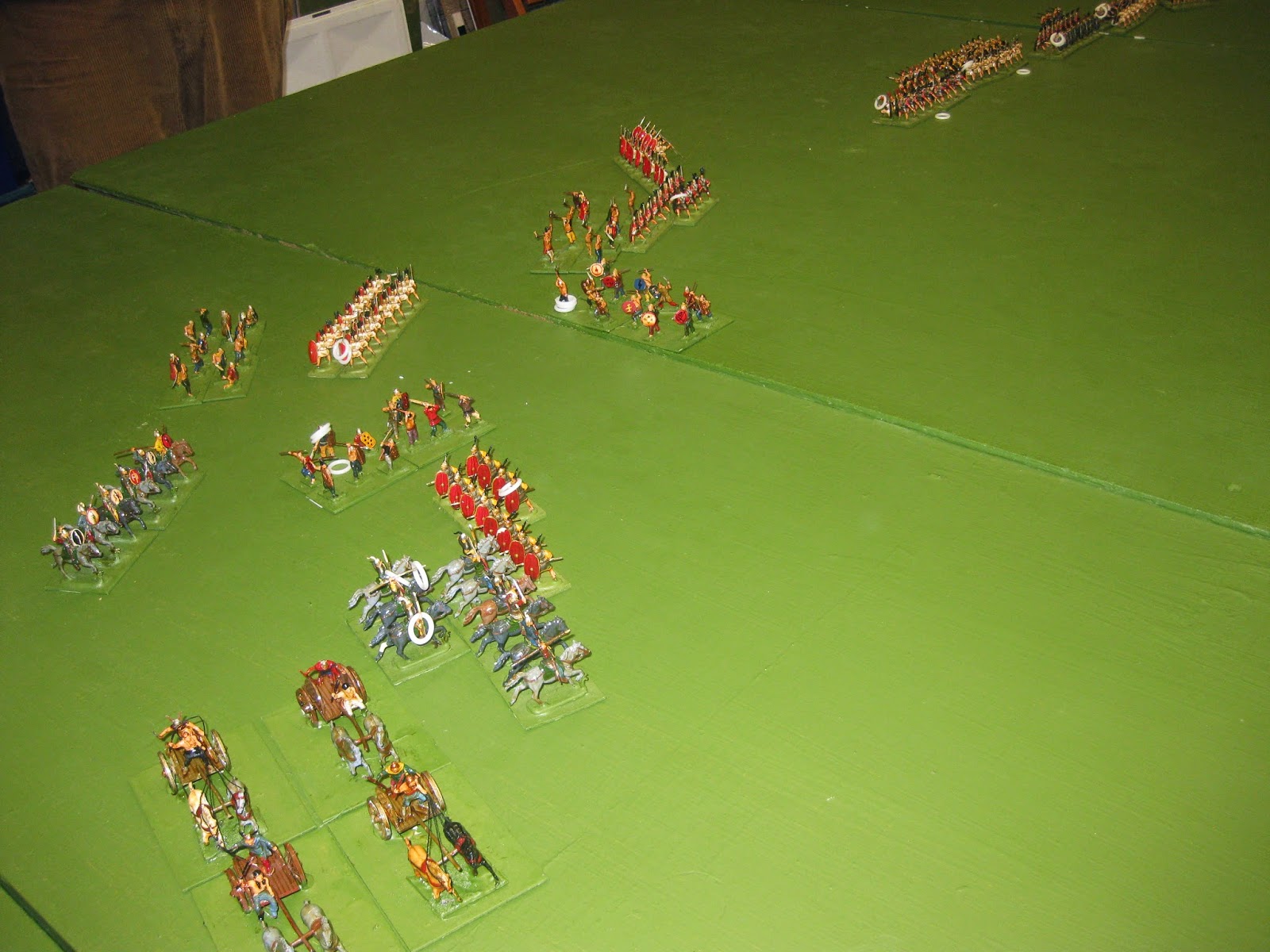 The chariots have got away and the warband have got my triarii. Elsewhere I'm making a bit if progress. Will's flank has bogged down. He's losing the cavalry fight, but very, very slowly. 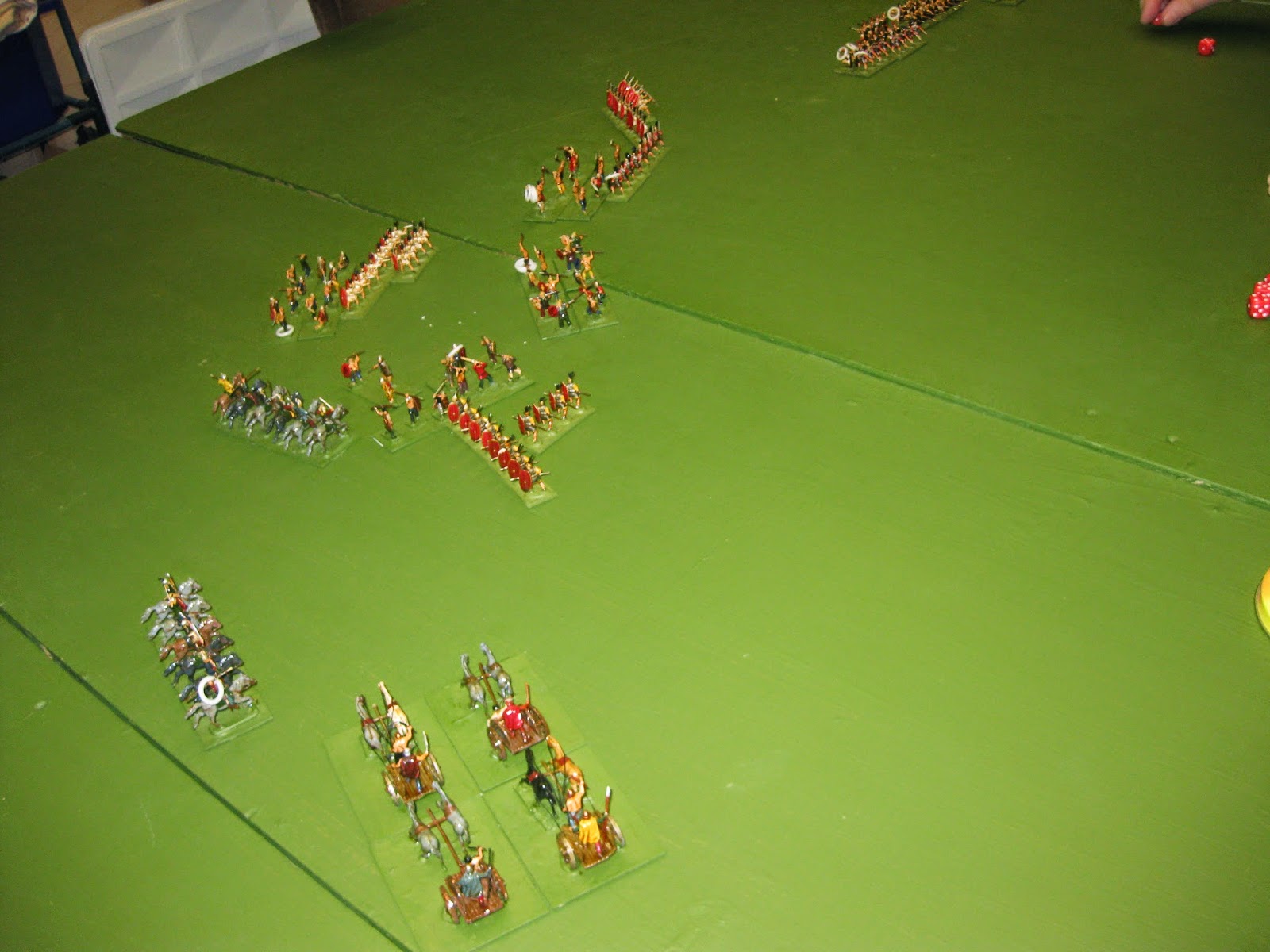 Very wisely now he's got his warband into the triarii Phil withdraws his heavy cavalry to preserve the unit. 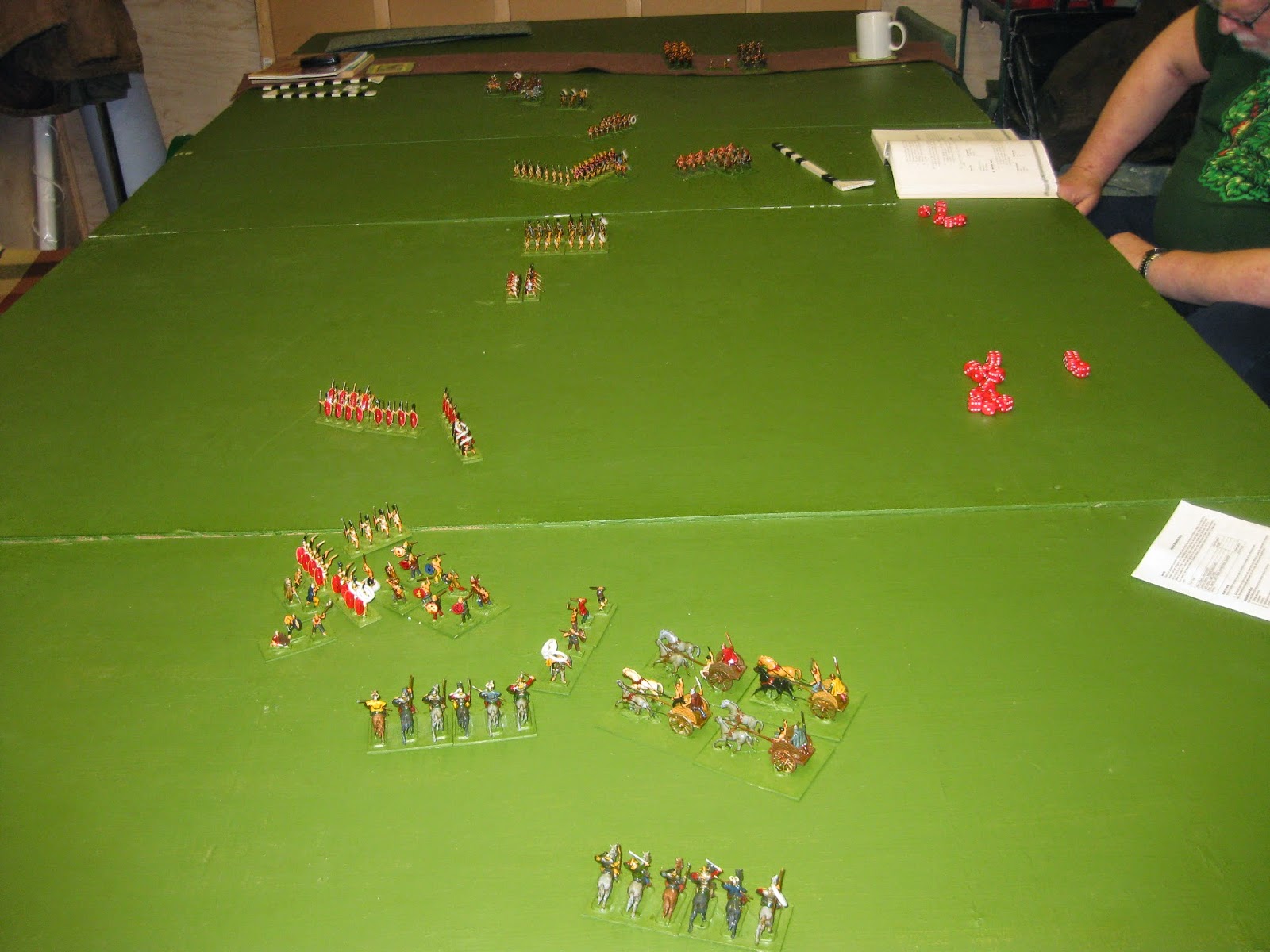 My left has completely collapsed. I'm still fighting in the middle, but Will has been unable to defeat Phil on his flank anywhere mostly. 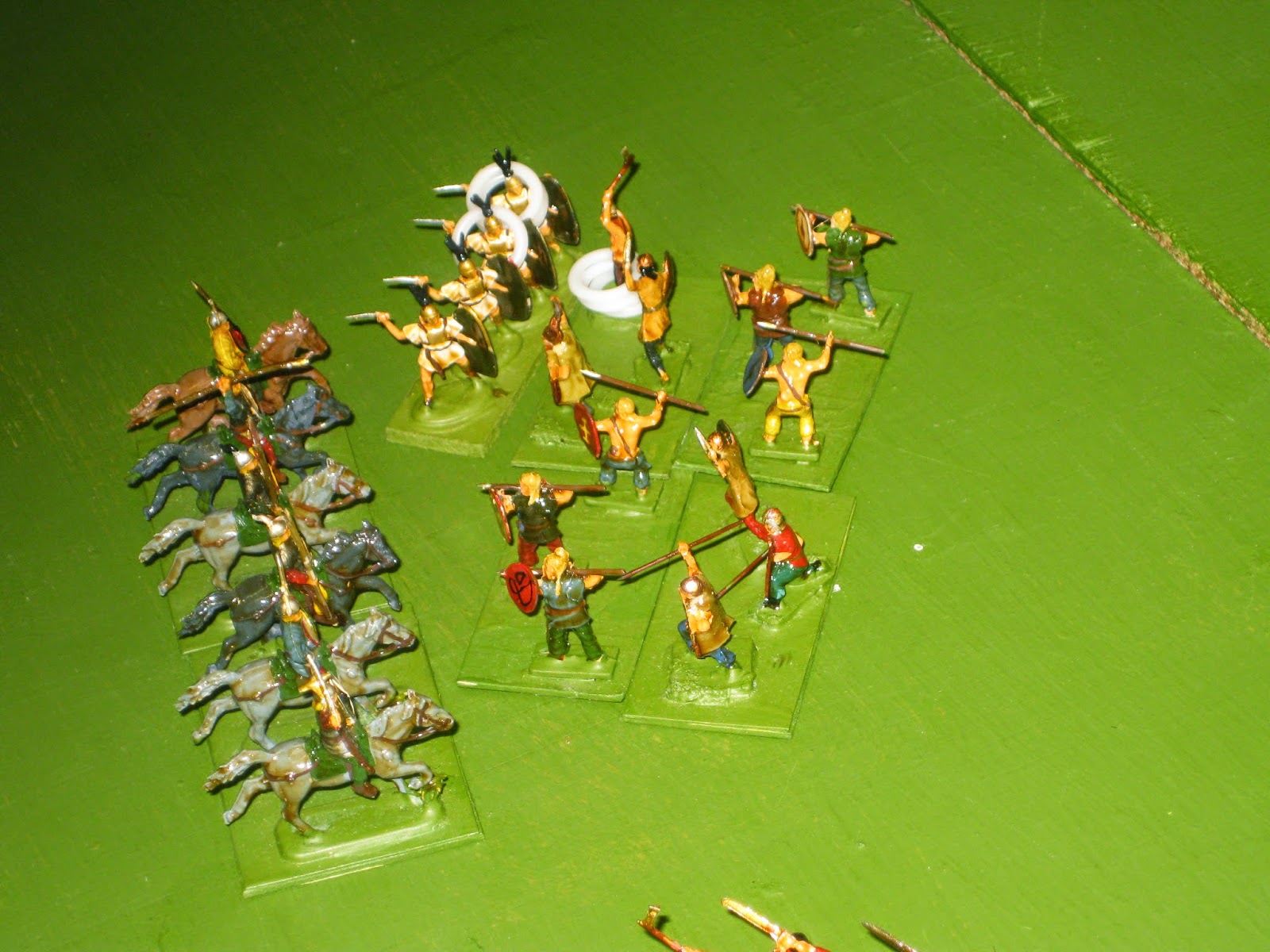 Phil is now able to use the greater speed of his cavalry to get local superiority and overwhelm isolated units of legionnaries. 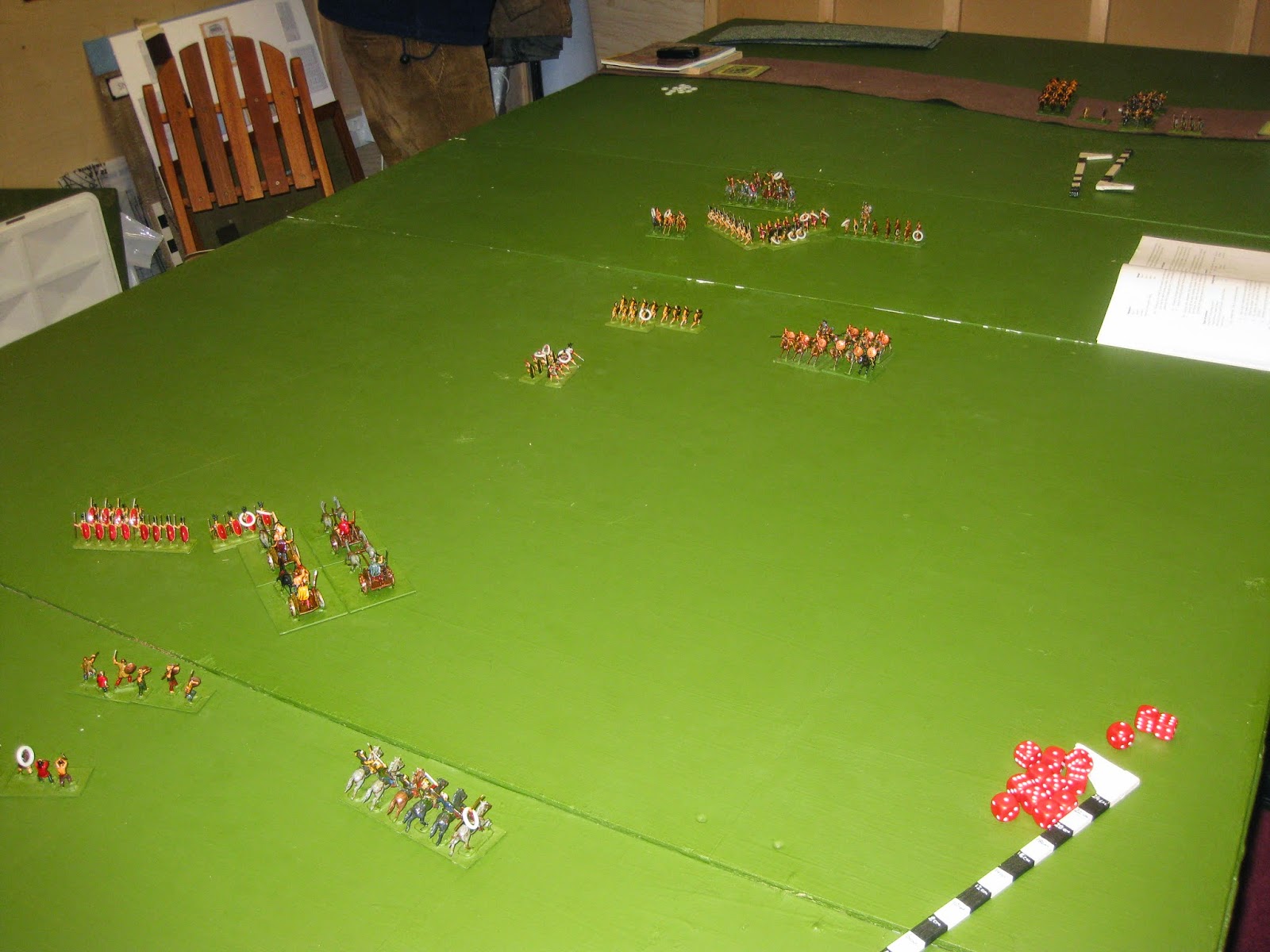 And then it was over. We were down to 6 units. Phil had about 12 left, although most were heavily battered. It was a hard fought battle, but we never got ahead once my flank had been turned. The tide of Roman history has likewise been turned.

If we were to play this again I would need to look at the amount of space out on the right flank. I think the legionaries might justify an increase in armour to improve their staying power against the Samnites. Being outnumbered in AMW isn't good and you need to have a way to counter it.

Now, off to prepare Saturday's game.