Cid & Al are ready to play

Actually, the first two  of three. I need to do the Andalusians (III/34) as well at some point. So, having a Sunday morning free I retreated to Shedquarters with my finished figures, put my "desert" board on the table and took some photographs. 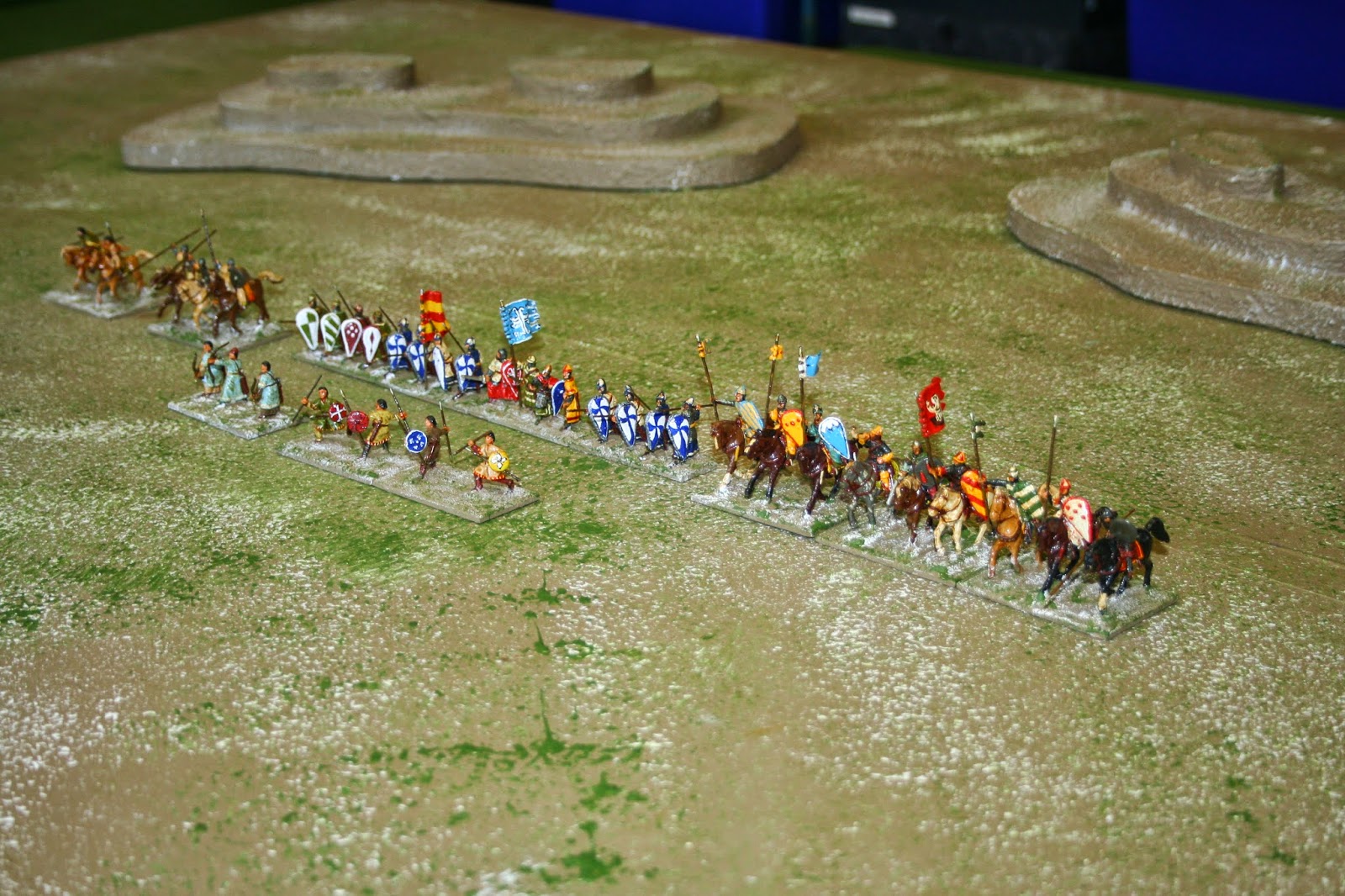 Here's the array of Spanish. A fine body of heavy foot in the middle, flanked by hidalgos and caballeros villanos, and screened by some javelin men and archers. 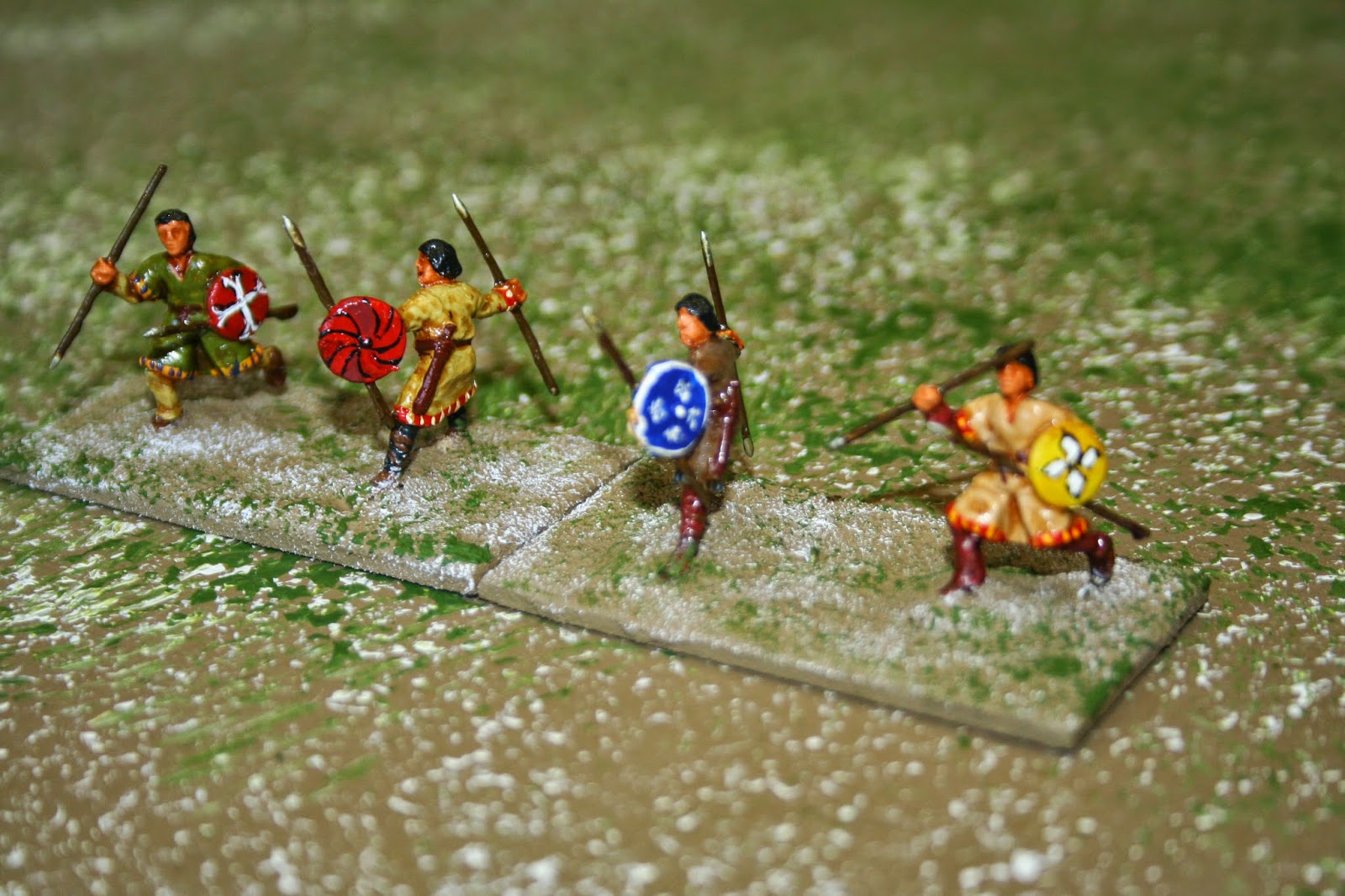 Here are the "psiloi". They've all got pins for javelins, and where possible I've added some more to the original figure. They're nice but I'm a bit concerned by the figures on either end, who are running on a single leg. Not the most robust of poses. 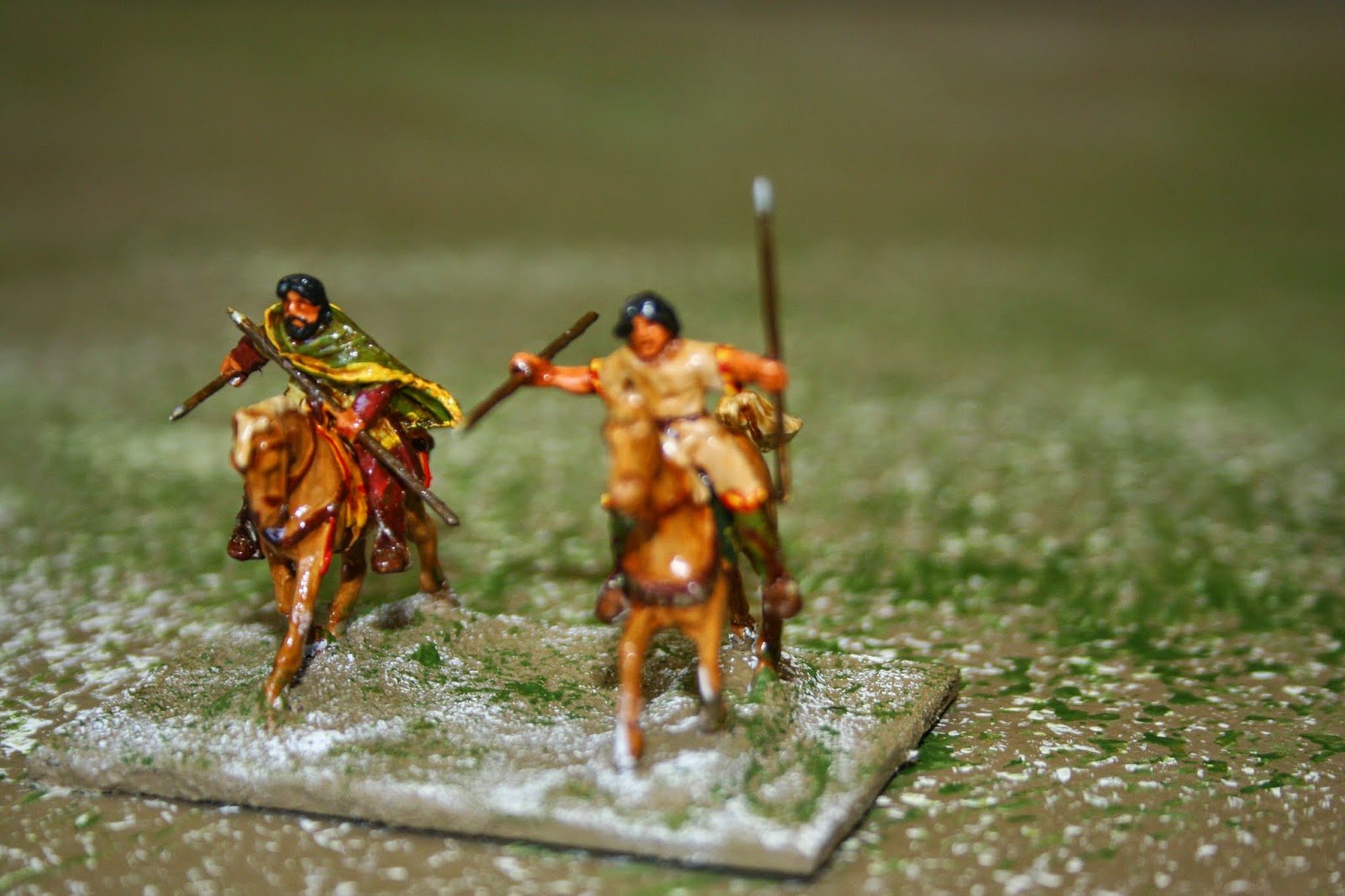 Oh! Forgot these in my brief description above. Some pre-jinete light mounted javelin men. 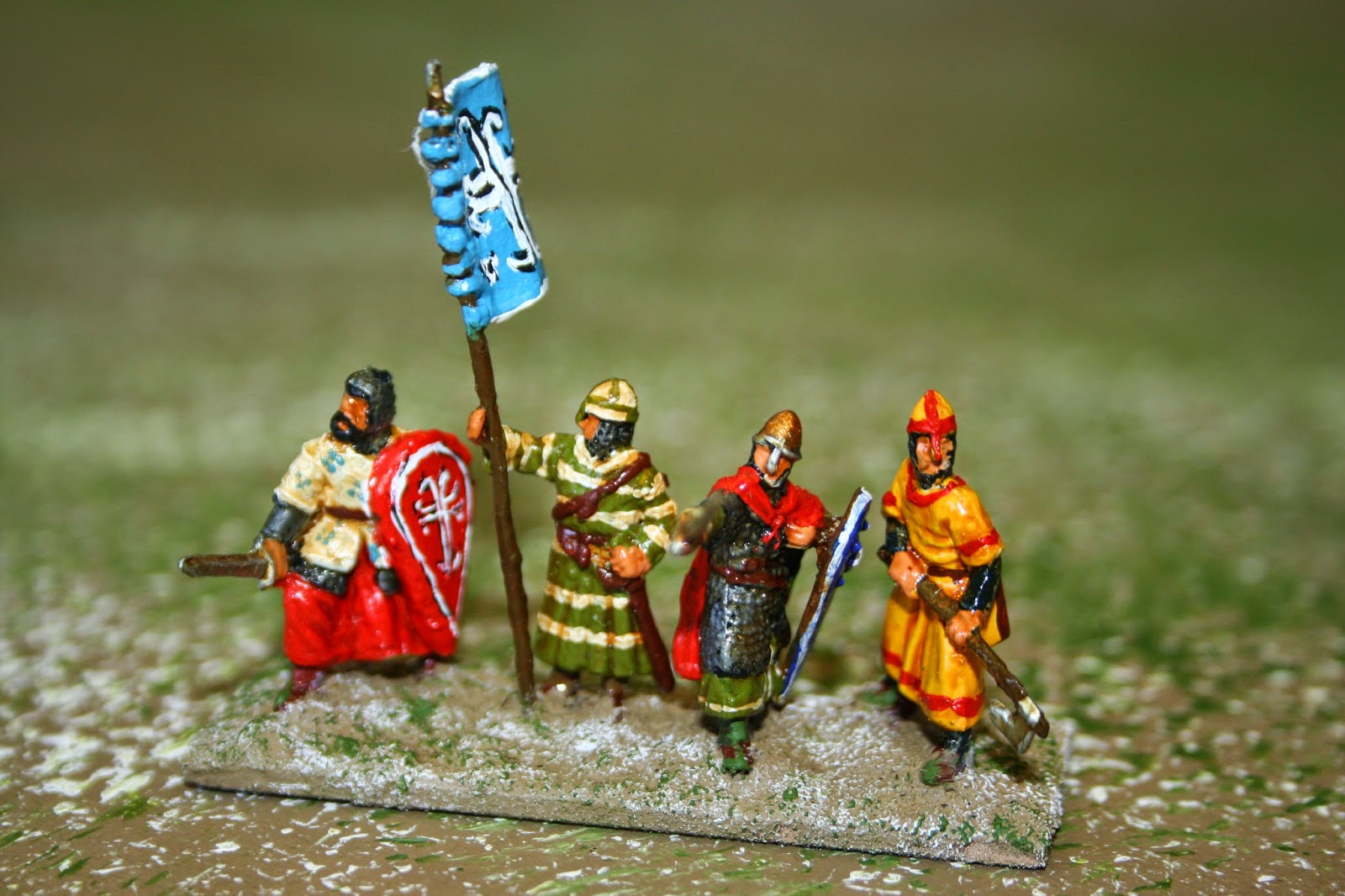 This is my dismounted General (4bd) element. One of the hidalgo bases could do as a General instead, but then I'd need to paint another one to make up my regular hidlagos, - which I will, in time. The standard is a plastic one from the set, with the pole replaced by florist wire again. I debated replacing the shaft of the axe with a pin, but decided I'd be okay. I can always go back and do it later if I need to. 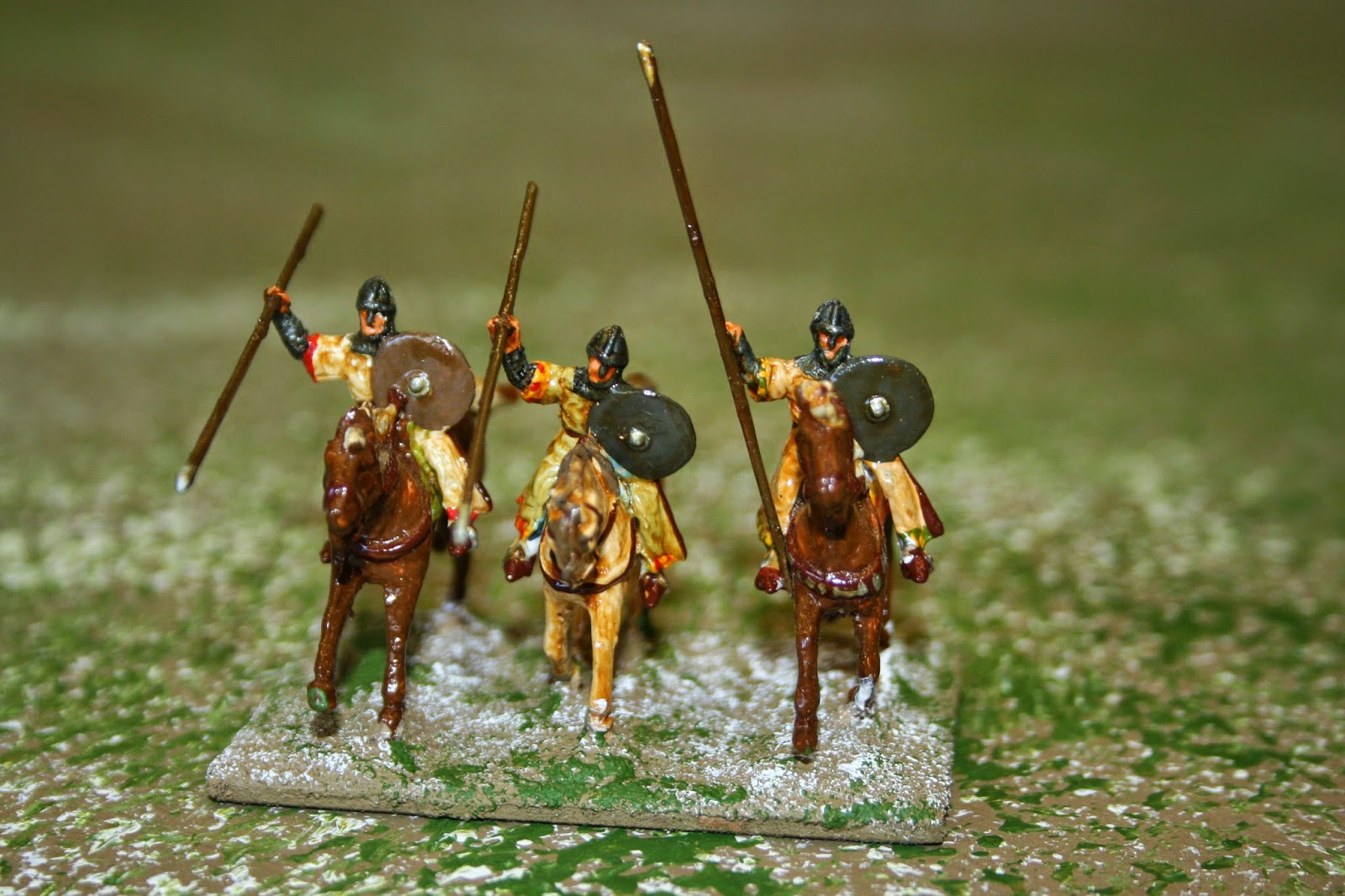 For the caballeros villanos I went for the figures with the round, simple shields, to imply they don't have the most up to date and expensive equipment. I've also gone for fairly simple colours, but with a bit of trim to indicate their slightly higher status than regular towns folk. 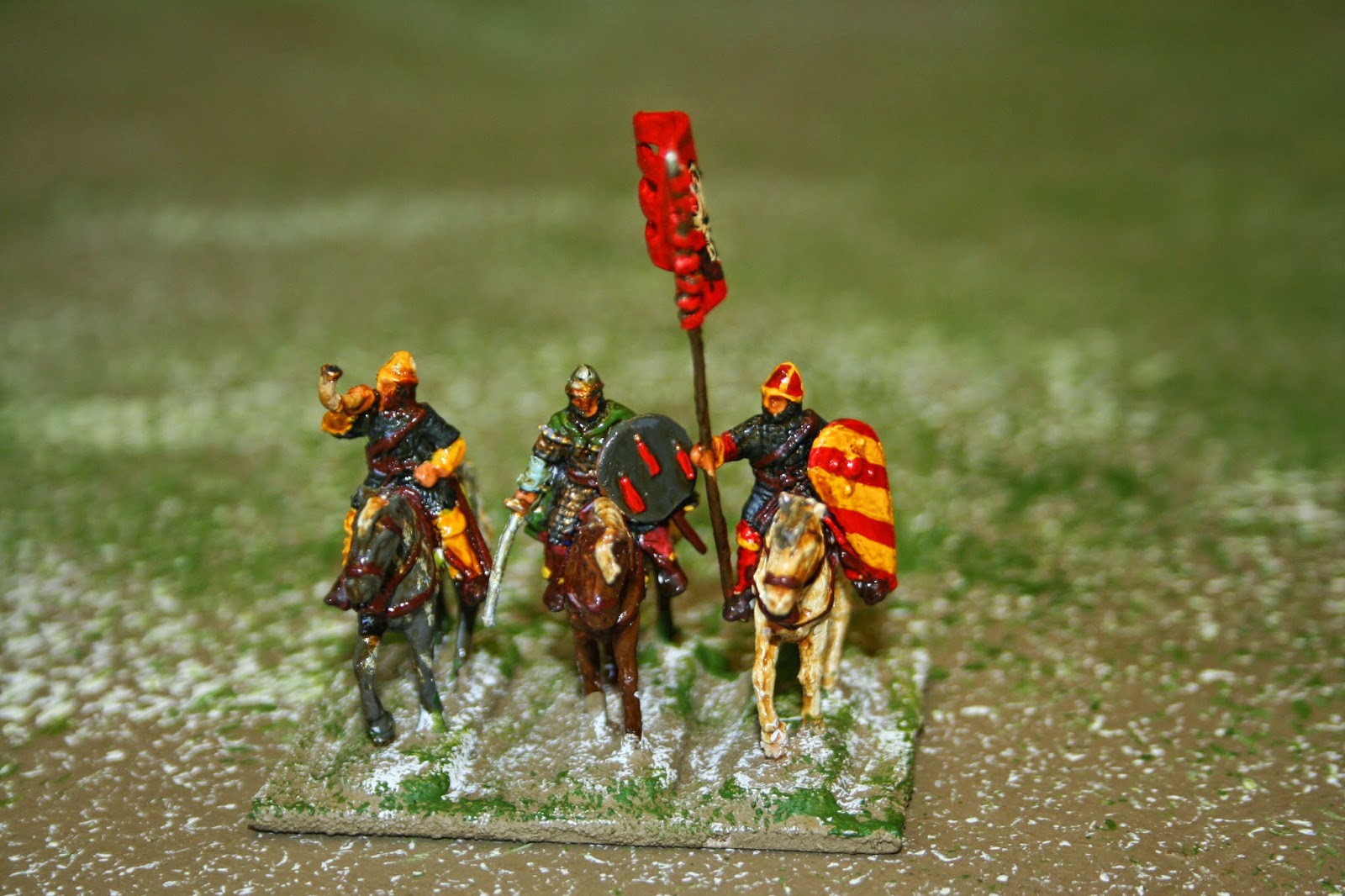 This is the hidalgo base which could also double as the General. 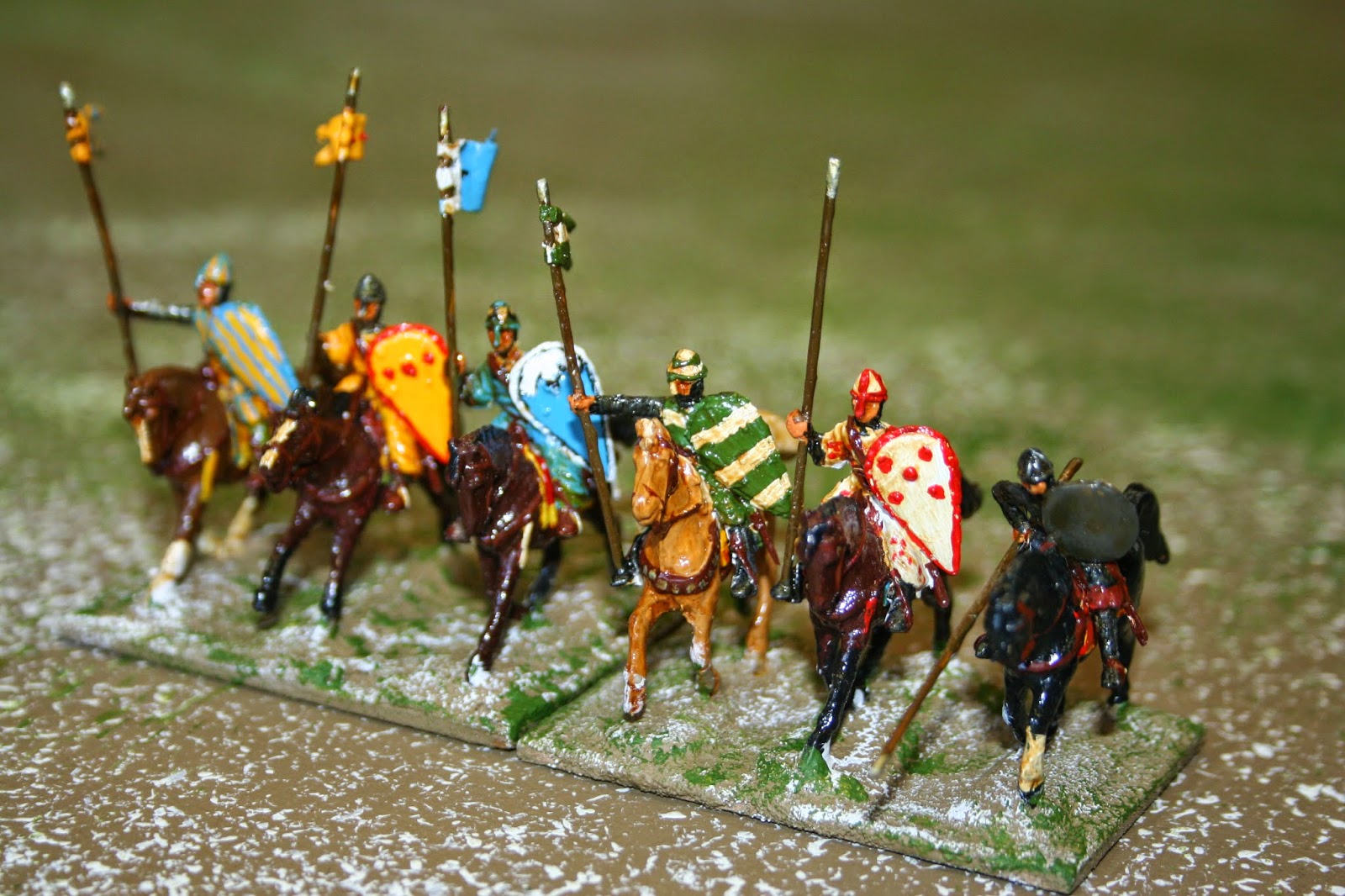 There are two other hidalgo elements. I added lance pennons, either by transplanting the ones from the lances in the set, or by using some wine bottle foil. The results overall are a bit mixed I'm afraid. 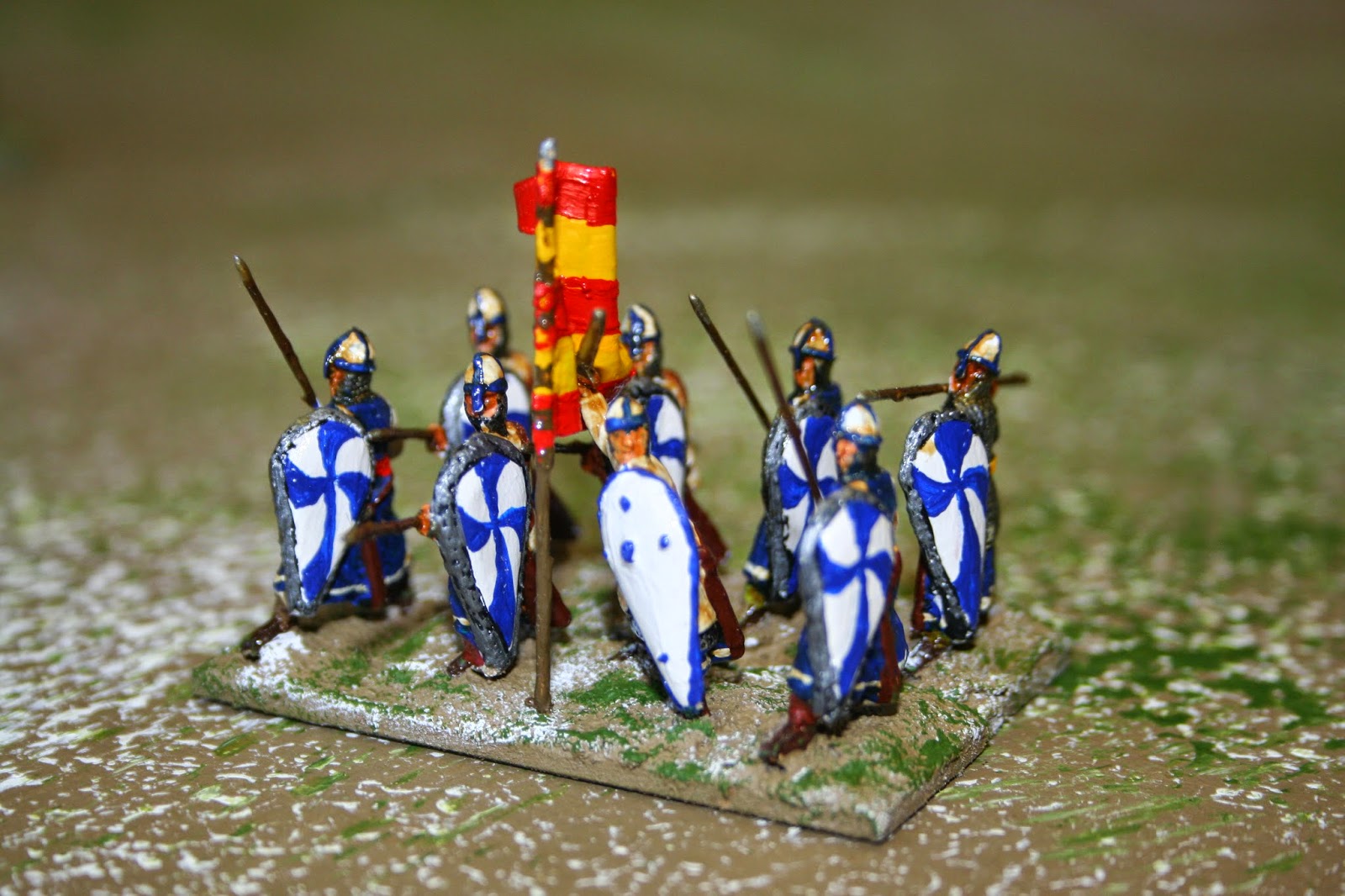 The army has 3 elements of 4 Sp. I did two bases in similar colours and "heraldry", but I fear they look a little too uniform for the period pre-knightly Orders, and a bit too smart to be a city militia. I gave them a standard to vary the colours a bit. 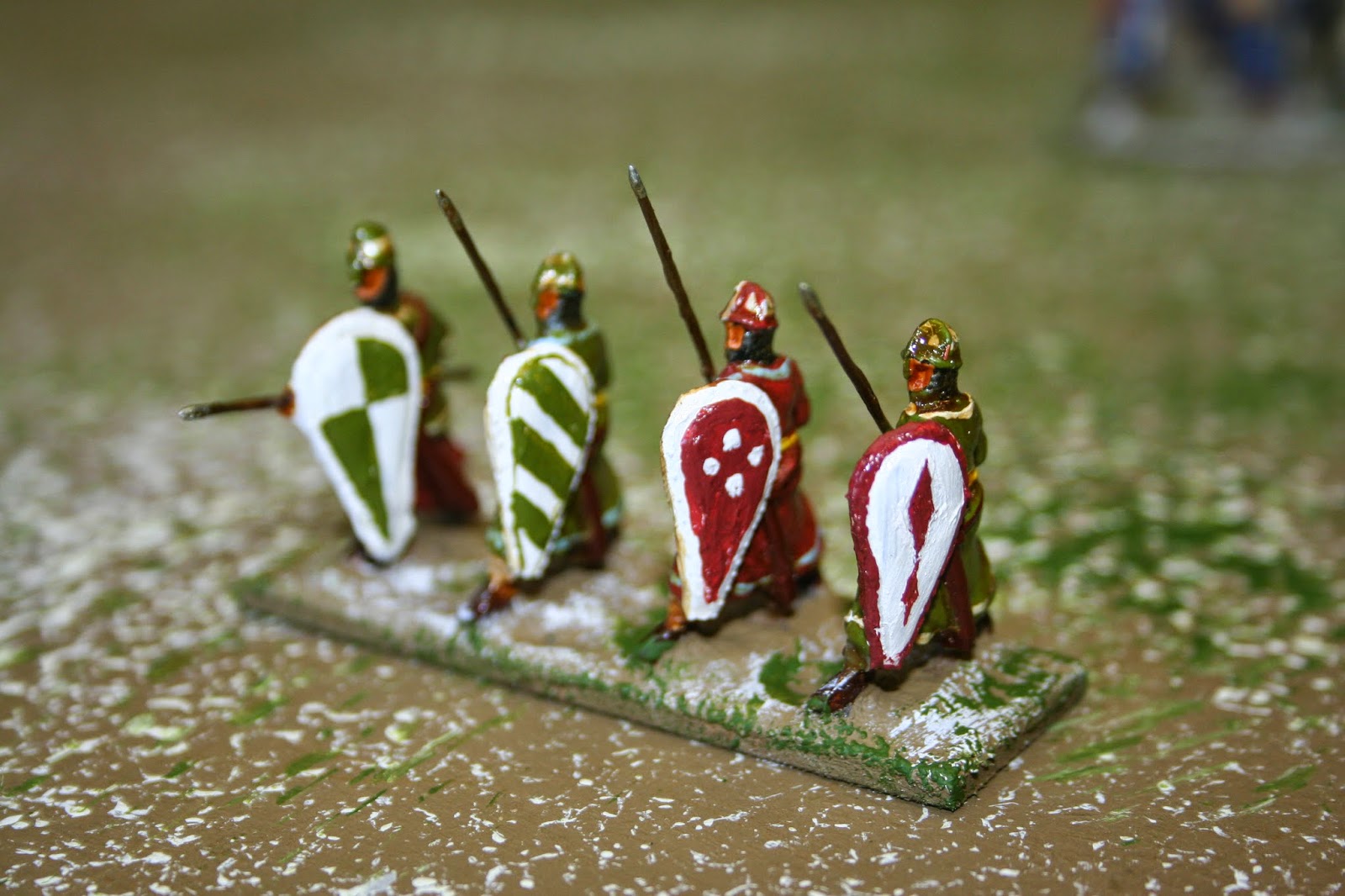 As I reported in an earlier post the army list changed from 2.2 to 3.0, so I had to add another spear base. These have a brick red/green theme. I'm quite pleased with this look. 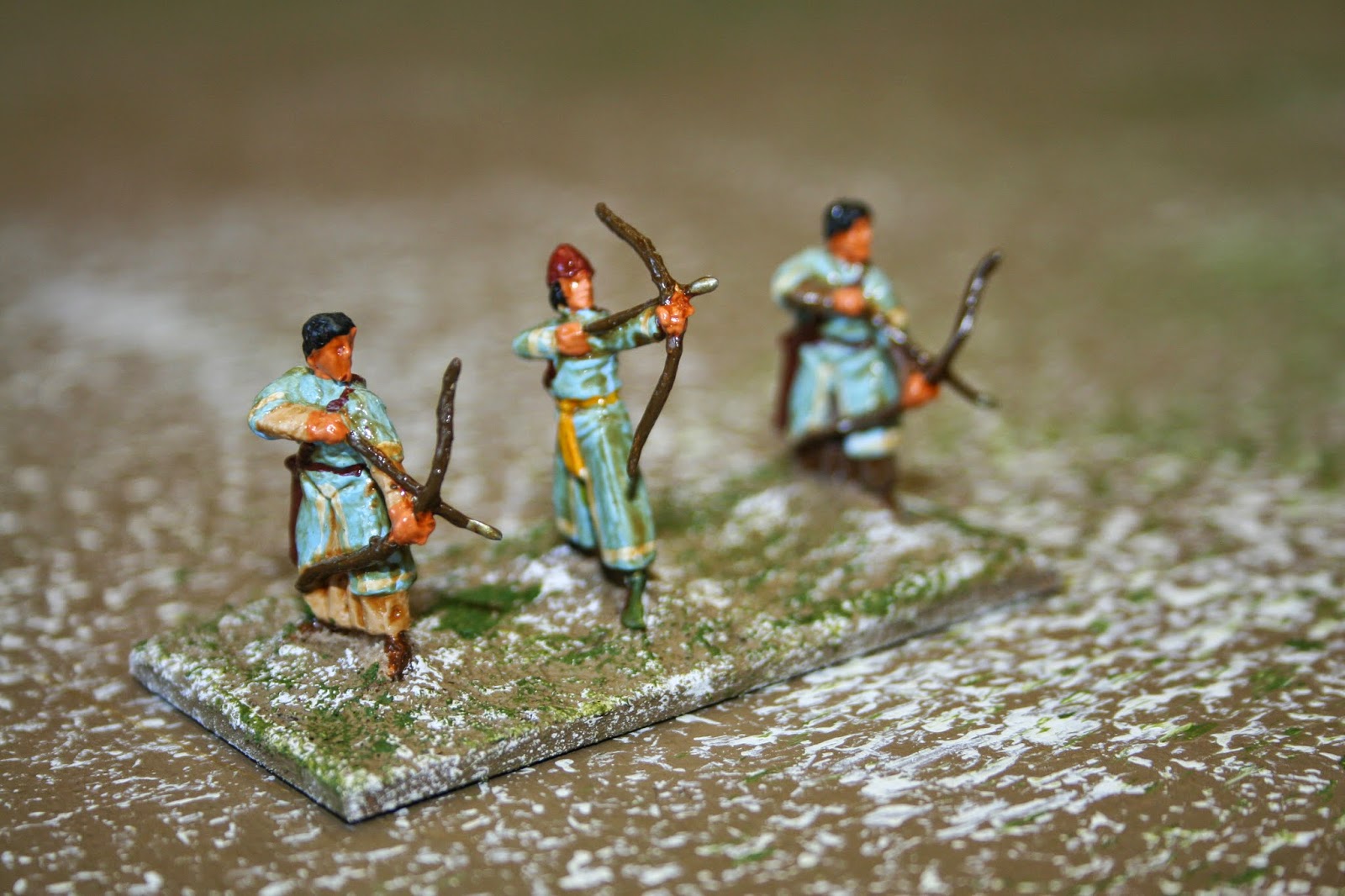 Finally a 3 Ax bow unit, which is new to the DBA 3.0 army, makes up the round dozen.

I also have a couple of spare bases to enable me to mix it up a bit. 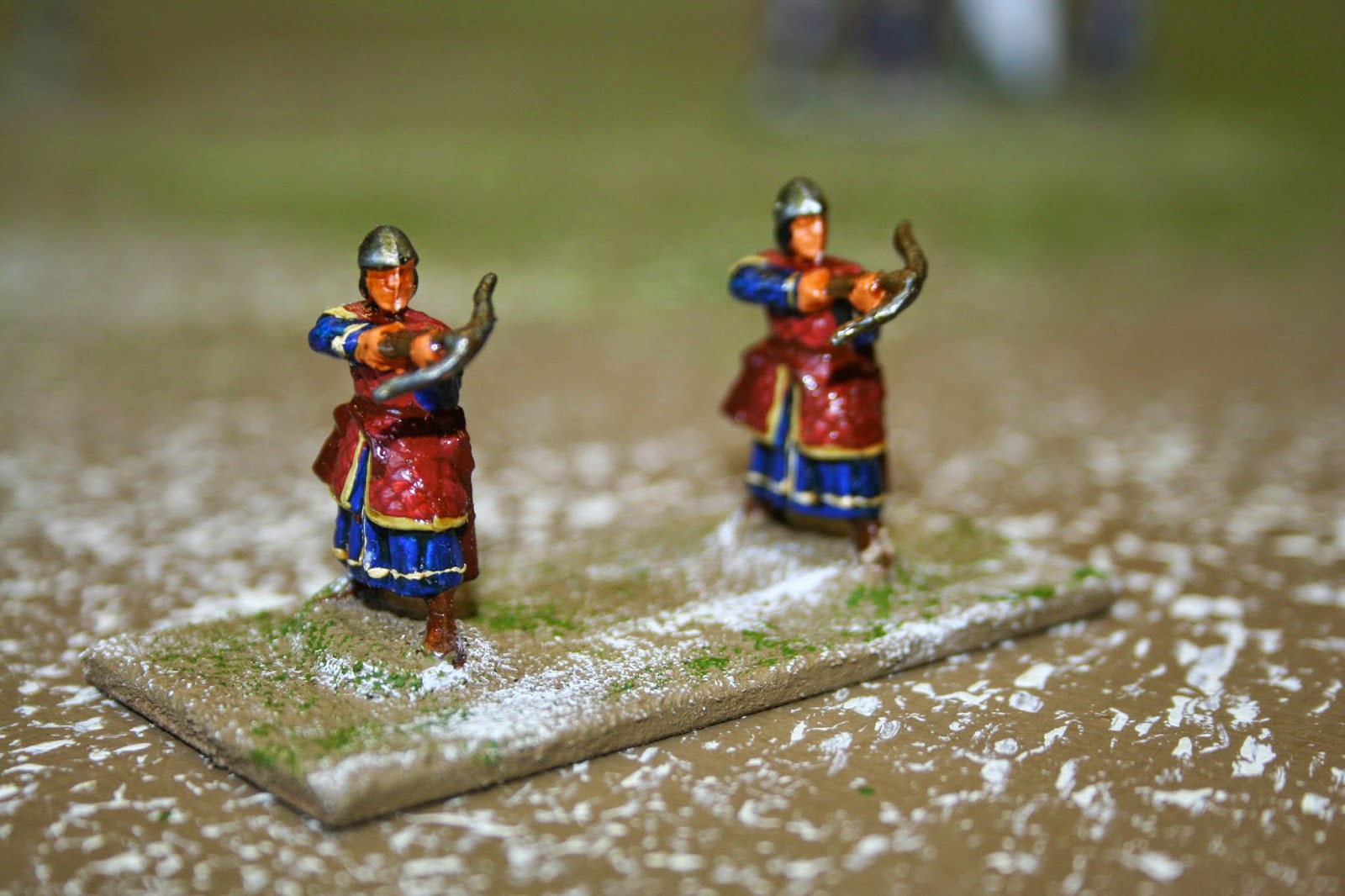 The cross bows were done as psiloi for the 2.2 army, but the 3.0 army sees them as 3Cb. I'll need some like this if I use the army under Armati, although I'm not convinced by skirmishing arbalasters. These may end up being rebased. 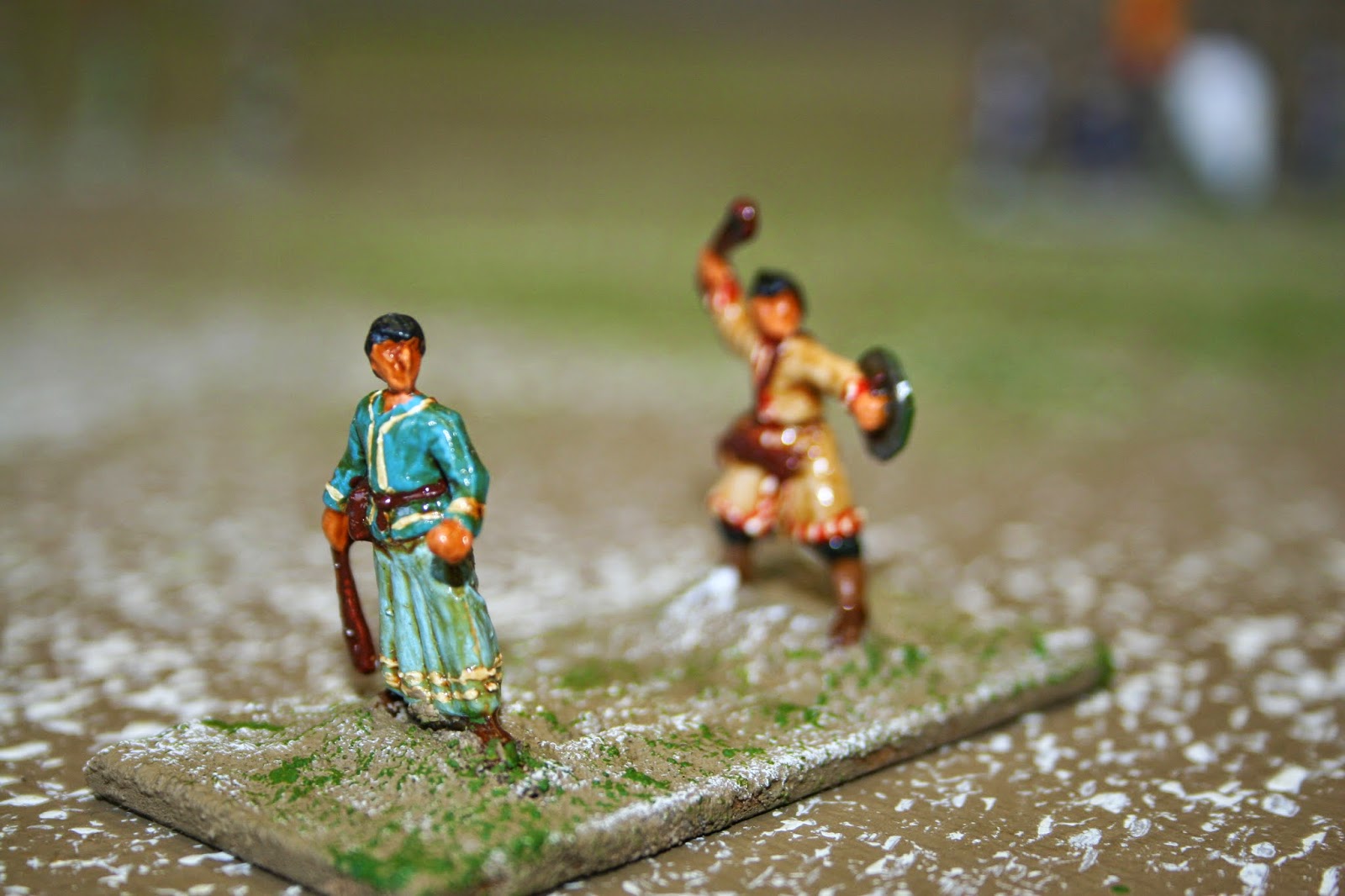 Finally some slingers. Armies never have enough of these, in my opinion.

So now we can turn to North Africa, for my Murabits (III/33). I added some huts and palm trees for a bit of atmosphere for the group shot. 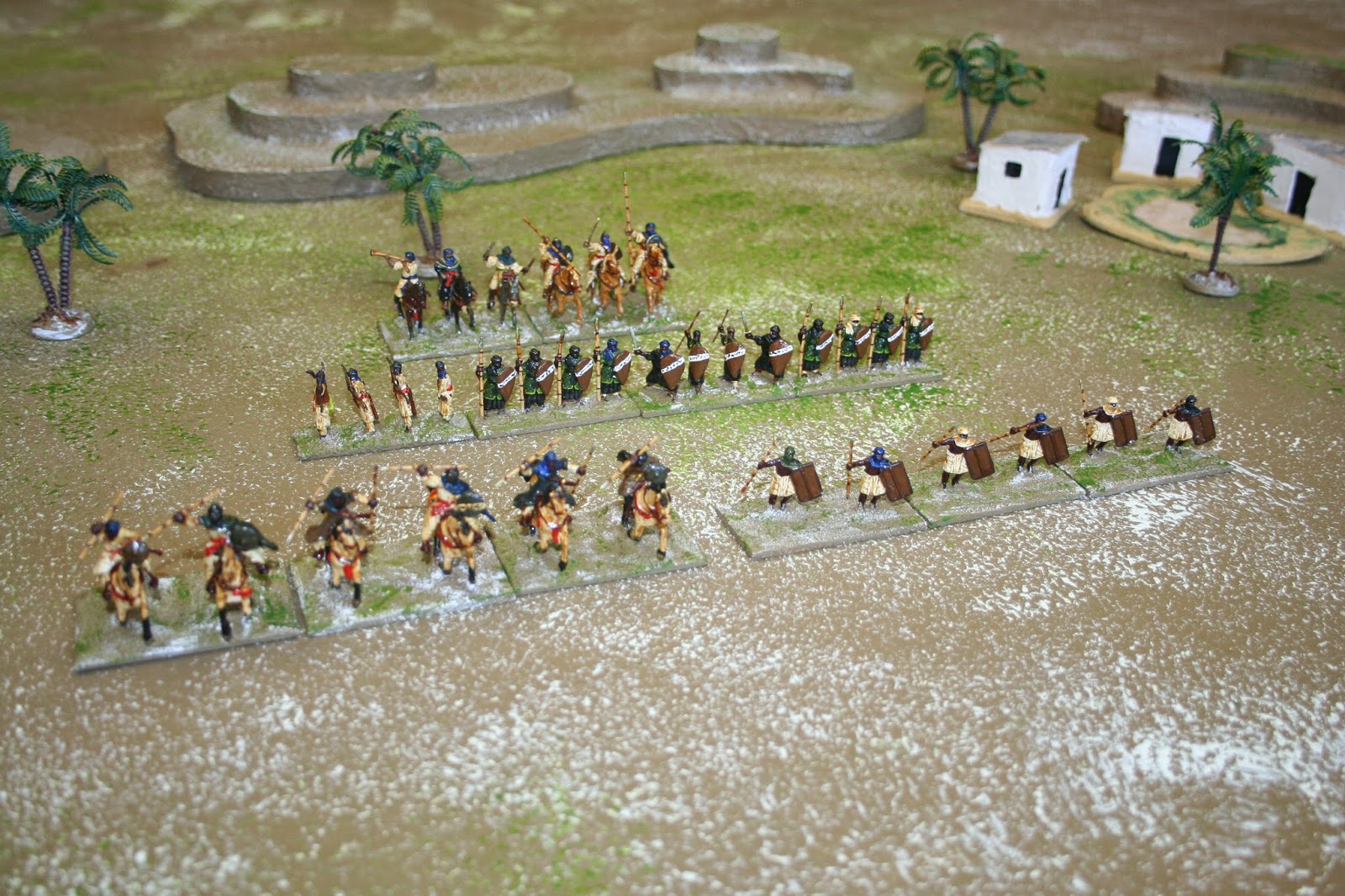 A good number of light horse, some decent heavy cavalry (not knights) and some spears make this quite a nice little army. 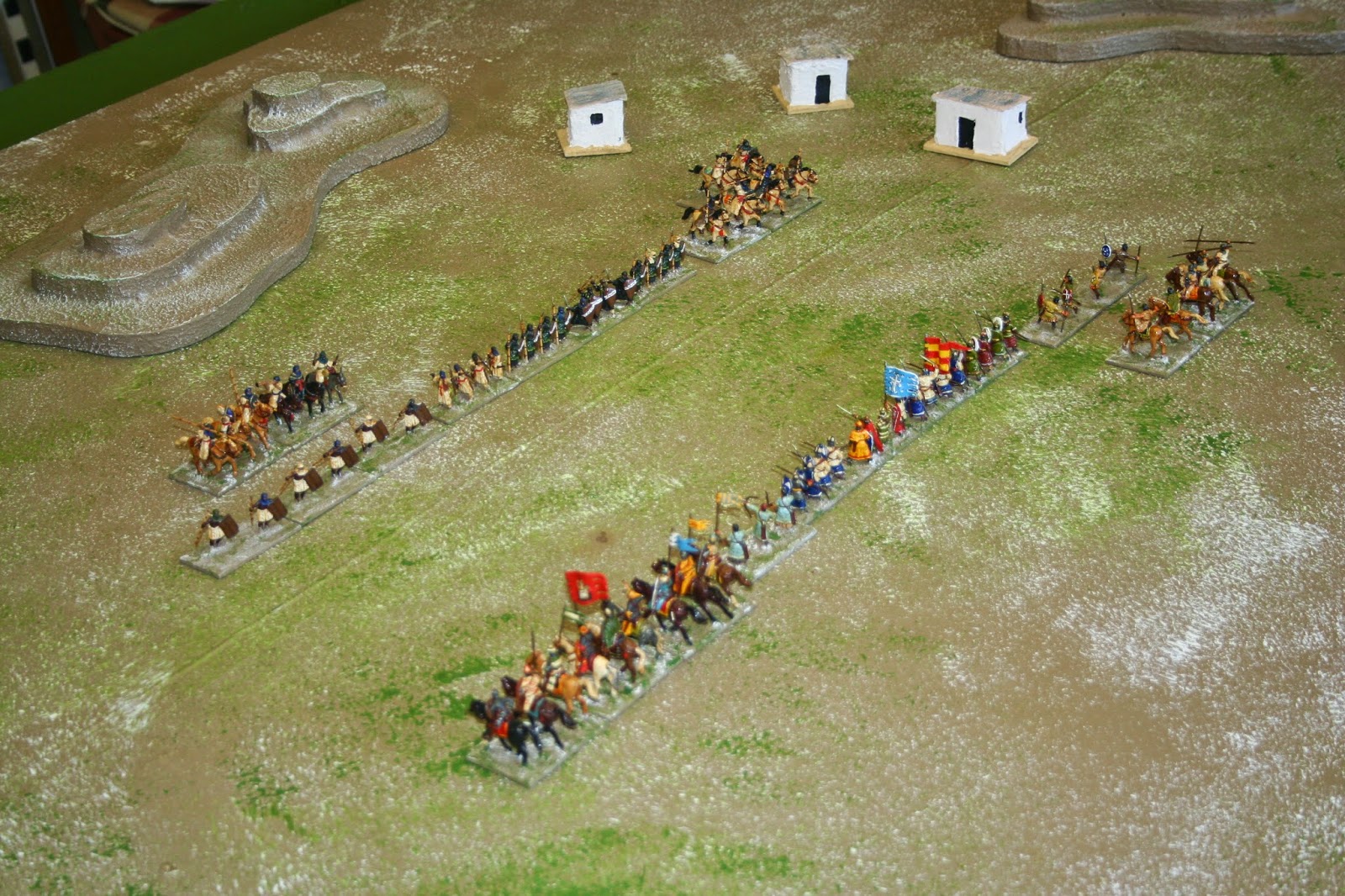 Here they are facing up to the Spaniards. Must be in Spain now, because there are no palm trees. 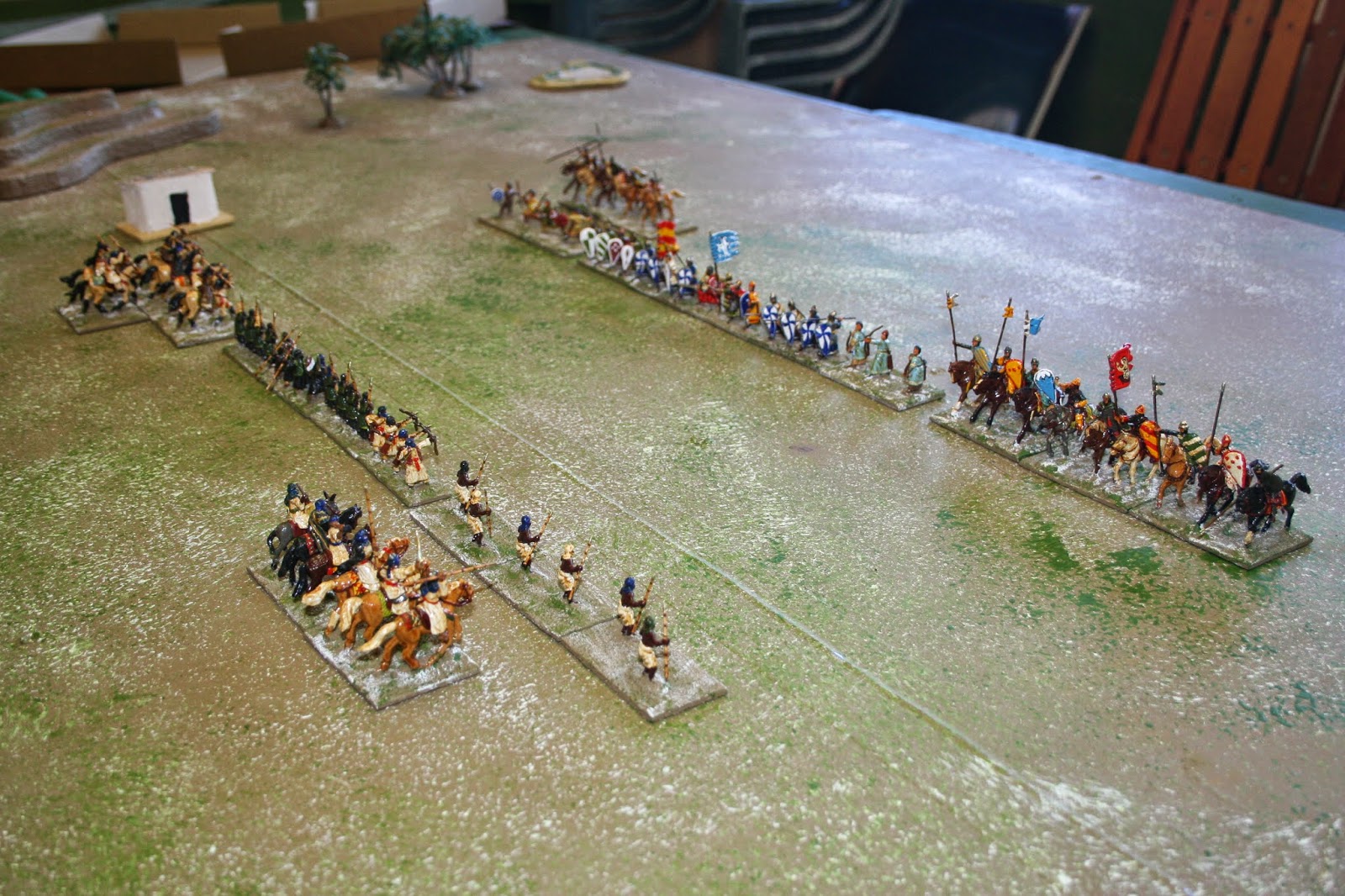 I'd like to pretend I played a game, but I didn't. These are just posed. It was important to check the cavalry can fight each other without the lances getting in the way. 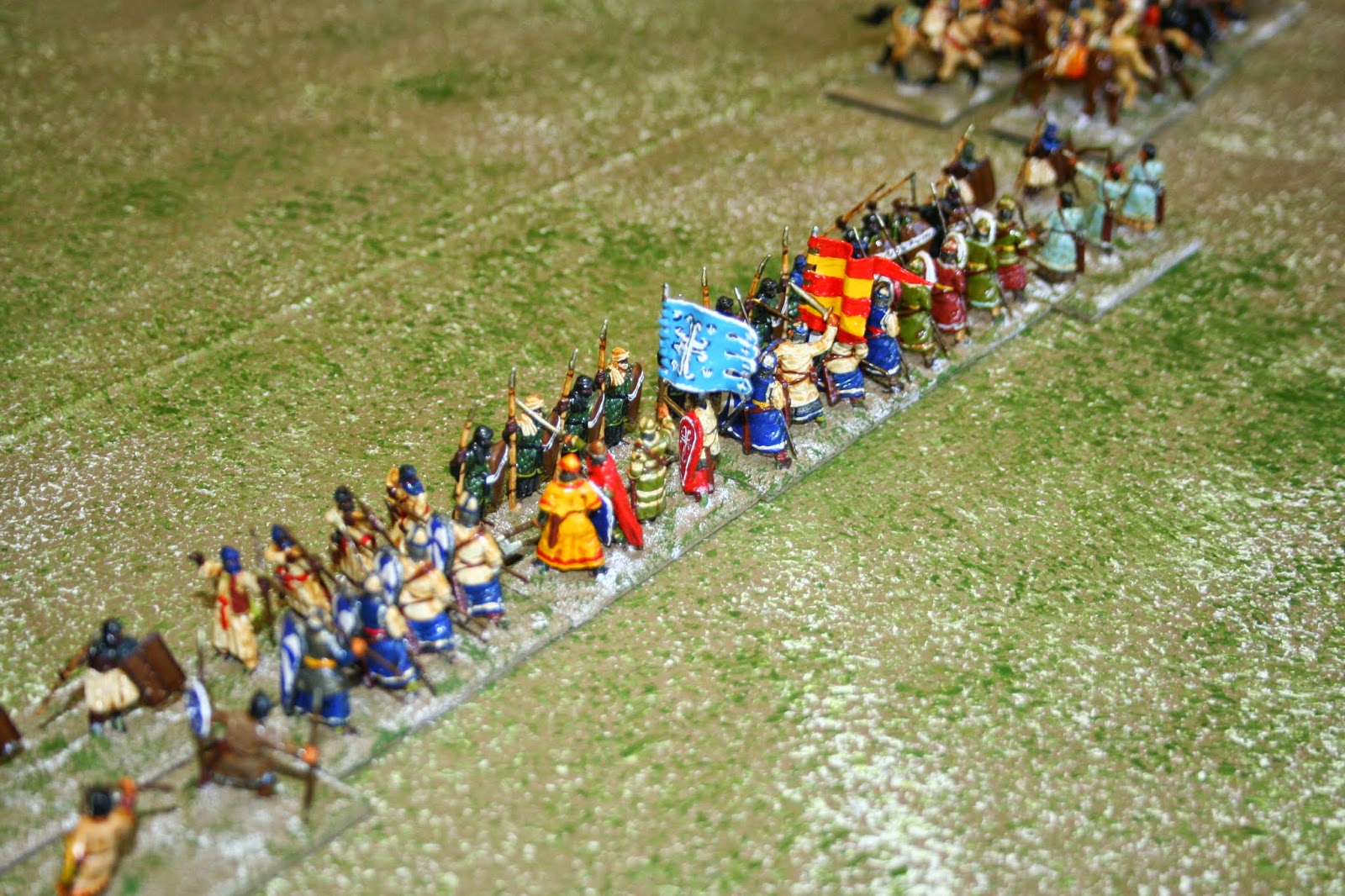 And finally the infantry match up, for similar reasons.

They're a nice colourful pair of armies. I have some more to do for the Murabits to give me a few more options, before I move onto the Andalusians.

This has been posted a bit later than intended. The trains this week have universally not run to time. Ironically this evening I caught an earlier train that had been delayed 20 minutes and so got home earlier than I would if the trains had been running on time and I caught my usual one. Got that? In summary it meant I had enough time to finish this post.