I really must start this project

I don't know if I've mentioned this before, but we (Mrs T and I) went to Peru last year. I went not intending to be interested in their military history (Incas v Spanish? What's the point?). However, against my best intentions and thanks to a guide in Arequipa the Pacific War of 1879 - 1884 came to my attention.

After a small amount of inquiry it became clear this was an interesting and of course confusing and bitter struggle with lots to interest the military historian and wargamer.

Coming back home it turns out there is a recently produced range of figures from Outpost Wargaming, and also some cracking good sources.

Alan Curtis has published a two volume guide called "To The Last Cartridge" which you can get through Nafziger. Curtis has also posted a painting guide on the Outpost website.

And then there's this Christmas present I got. I nearly didn't ask for it. After all it's £45. That's a lot for a book. On the other hand when you see what people will pay for a box of plastic figures from Warlord it's actually reasonable. 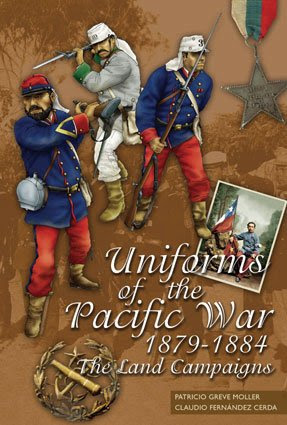 I'm talking about "Uniforms of the Pacific War" published by Partizan Press.

For anyone wanting to model or paint the armies this is about perfect. The translation is a bit off in places (evidence of Google Translate, perhaps?) and I think it would have helped if the translators had read Curtis' books. Inclusion of an explanation of exactly what a Civic Battalion is wouldn't have hurt, for example. The problem is often that a direct translation of a word doesn't always carry the same meaning. "Militia" and "Volunteer" have distinct meanings in English in a military context and no doubt Spanish is the same.

Anyway, ignore that, because this book is brilliant. In 256 pages you get 160 pages of colour illustrations and descriptions, half of each. Each illustration broadly has 3 clear representations of different units and uniforms. So that's over 200 good, usable pictures. They're divided by Campaign and by army, as all the sides seem to change their uniforms and organisation from year to year. And nick their opponent's kit. And some of them wear picklehaubs.

Your basic Osprey has 8 pages of pictures with a similar number of pictures per page. So, in one way this is the equivalent of 10 Ospreys. Then you also get the rest of the pages stuffed full with contemporary photographs or modern photographs of contemporary equipment. Then to round it off it has a list of all the units that took part in the War, by campaign. The brief description of the War at the start of the book is handy, but if you're serious you'd go to Curtis for that any way.

Any other problems? Well, be nice if it had an index, but on the other hand it means you have an excuse to leaf through it when ever you want to find something, and it is gorgeous to look at.

The original authors were Chilean, but they've tried very hard to cover all three armies in the conflict. The slant on the history is also Chilean, as is Curtis', but I think that's inevitable. The Chileans won in a nation defining way. The Peruvians and Bolivians got thrashed and lost terrain that they still covet.

So, I really have to get my order for figures in and start this project.

When I'm done with my Arabs, Andalusians, Feudal Spanish, and Taipings.
Posted by Trebian at 11:27