So, having rashly suggested that the Rapid rules might work for the Wars of the Roses and the Battle of Northampton, there was nothing for it but to try the ideas out.

Phil took the Lancastrians and I ran the Yorkists. I had some scribbled notes but no playsheets so Phil was a bit at sea. He couldn't even remember playing Rapid Raphia, so he was on the back foot a bit. 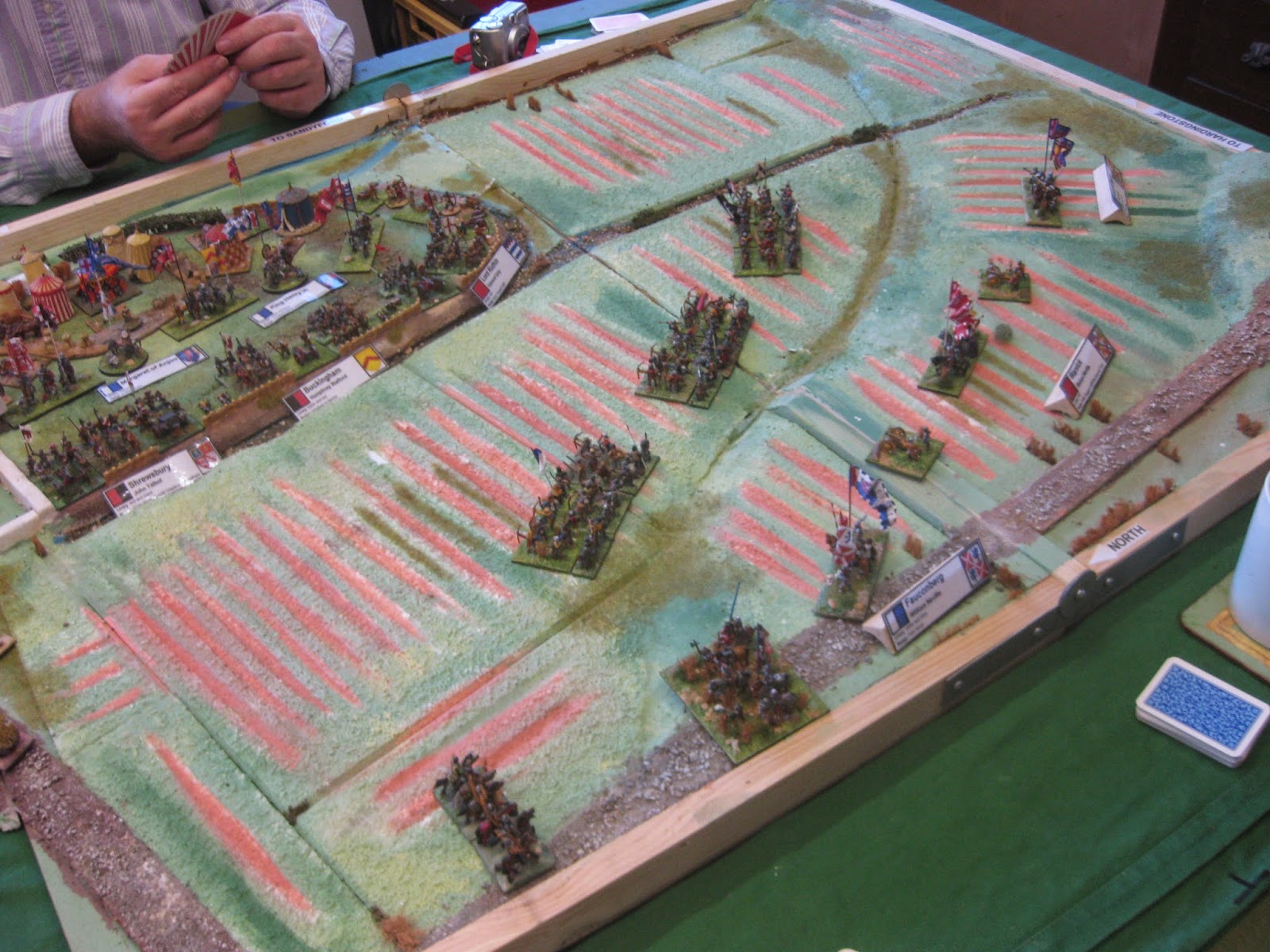 The battlefield is divided up into notional zones. It takes three moves to get from ridge to barricade, and there are zones in front of each defending battle. When we play the game live we will probably need to mark them with pins. The cavalry skirmish takes place in a little world of its own, but it gives the defender something to do. 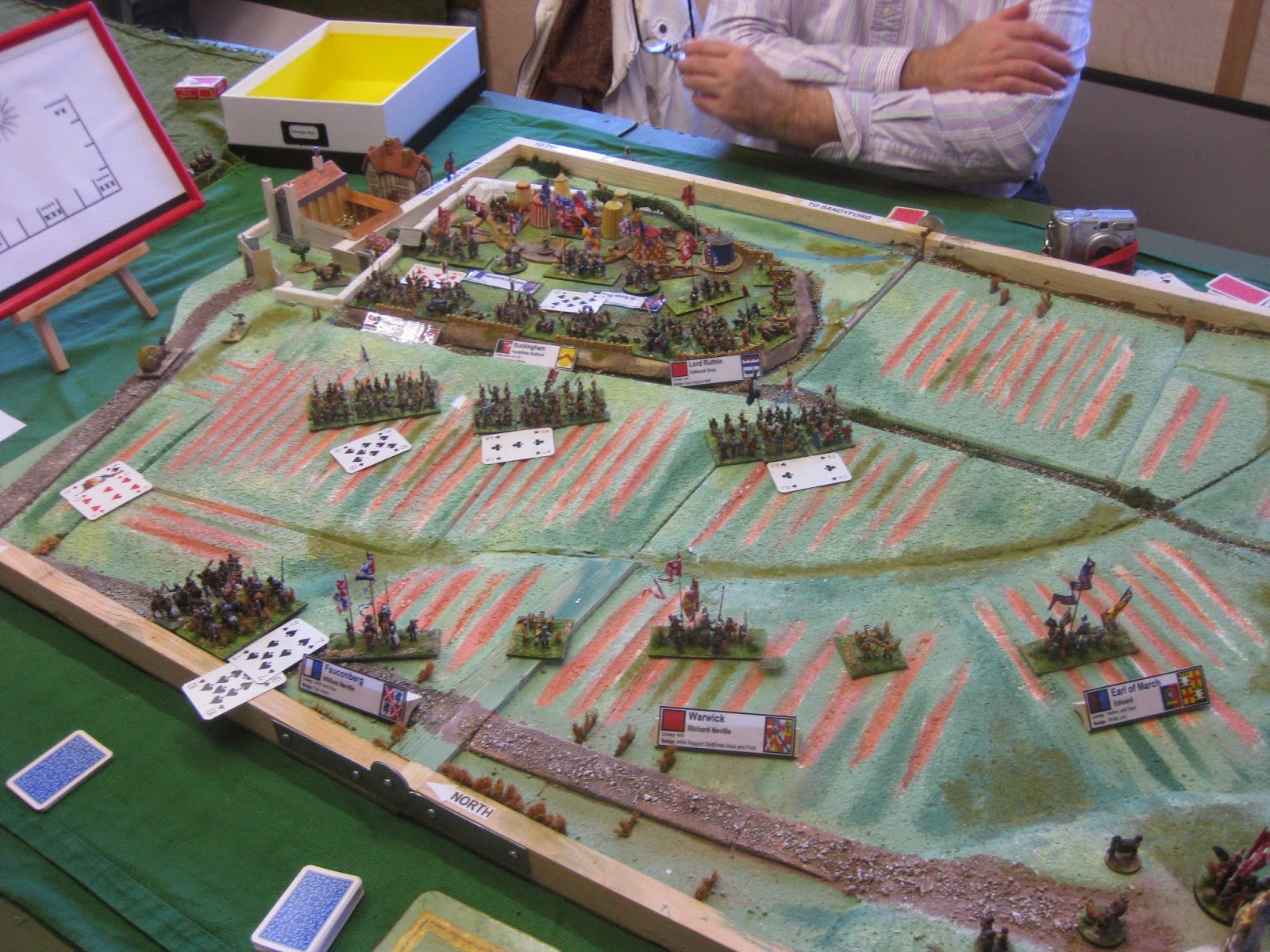 I was going to have battles/units switch from moving all on the same cards to fighting by element when they got into contact, but that proved to be unnecessary. We had quite a discussion about the effectiveness of archery and decided it shouldn't be too strong. There's no account of an arrow "storm" at Northampton and neither of us is convinced by the masses of falling arrows argument. A bodkin armour piercing arrow is intended to be shot on a flat trajectory for a start (think about it, - a falling arrow is losing speed and coming in at a glancing angle).

I pressed on and moved up to the barricades. The totally new element of the game is the use of the joker in the bidding for priority at the start of the turn. If you bid with a joker you get to chose not only who goes first but also select from a menu of potential special events, - such as treachery, negotiations, artillery able to fire/not fire and so on. Some of these events can only be tried for at certain times. 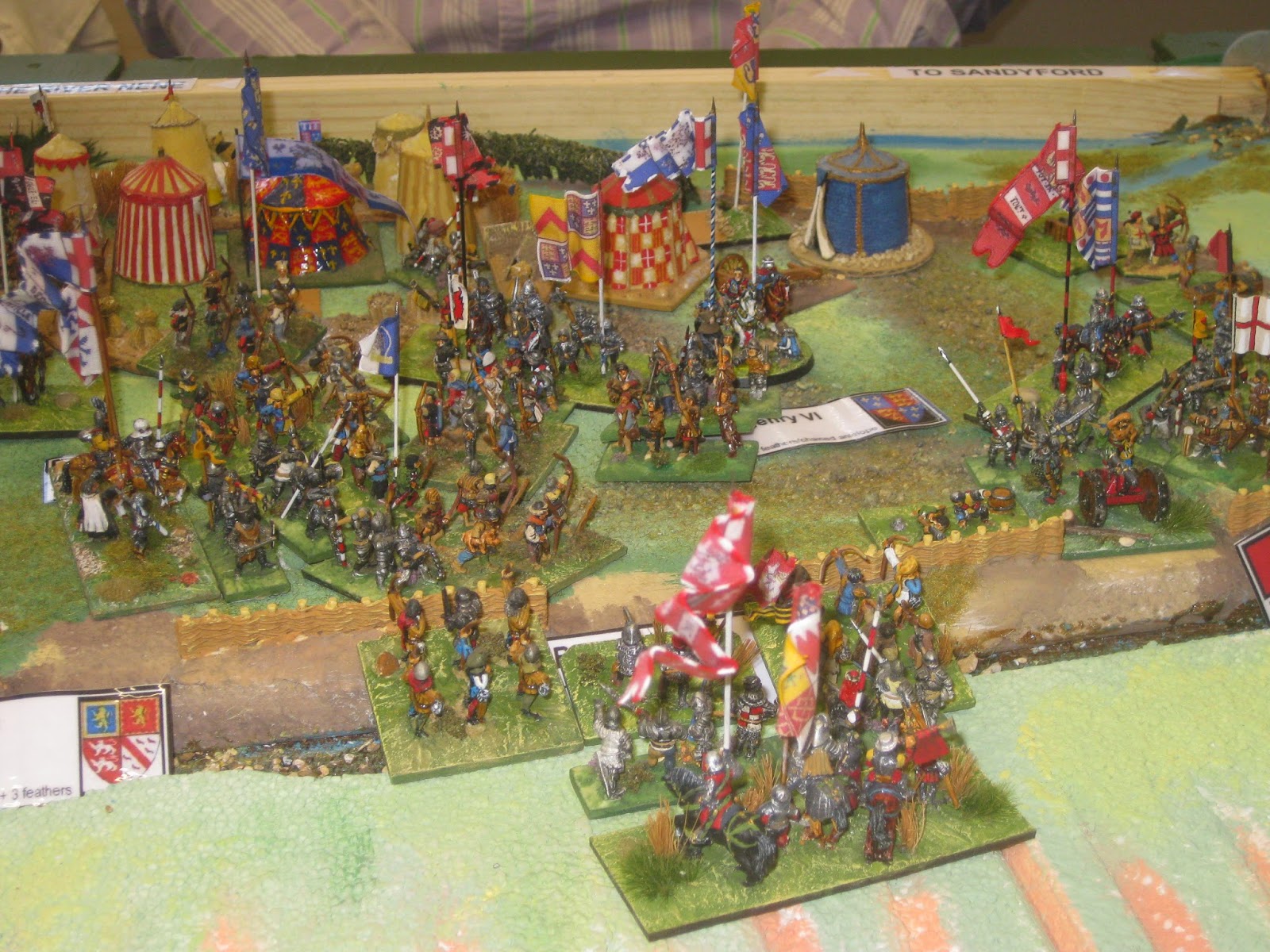 When we got to the barricades Phil tried with a joker to fire his guns, but failed. I went in the next turn for some treachery, and my Lord Shrewsbury switched sides and helped the Bastard Fauconberg's men over the defences. Although that is effectively game over we fought on some more turns to see how the rules played out. 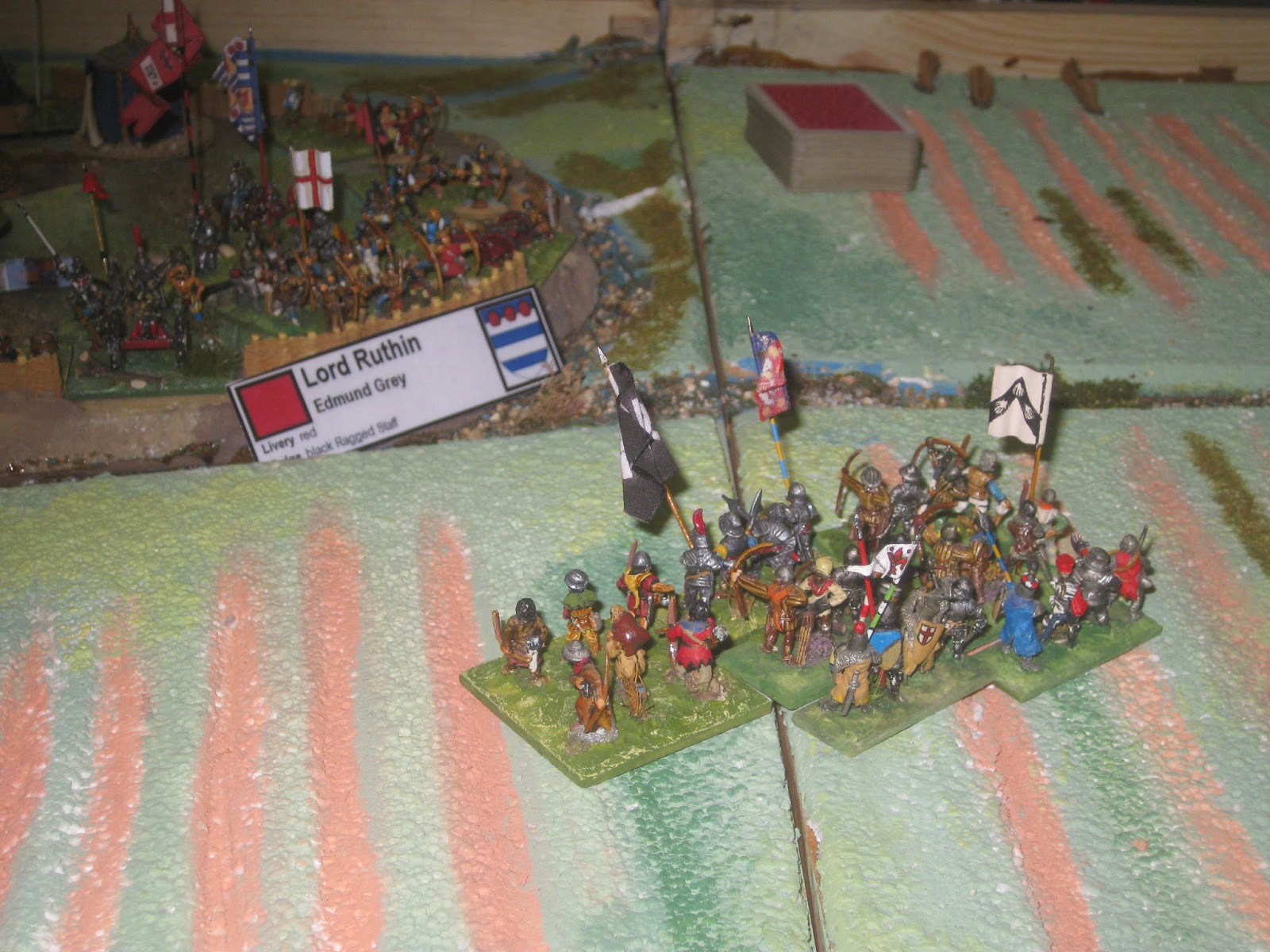 Elsewhere it proved very hard to get across the barricades until the flank has been turned by the treacherous retreat of Shrewsbury's men. Lord Grey of Ruthin held on to the bitter end, seeing off Edward of March, who died in an assault.

I then turned up another joker and demanded a complete surrender, which on a turn of a card turned out to be effective.

So, in conclusion there is a game in there and it will probably take about 30 minutes to play, which is perfect for a participation game. We will halve the deck for each side and use 26 cards plus two or three jokers depending on the special events. So far we have:


Any other ideas plus how they might be resolved welcome.

What we have got here is a set of rules to play Northampton quickly. That's the first target. Once that's sorted I can look at producing a generic set of WotR rules.

Once we'd finished we had a quick game of DBA with the Feudal Spanish and Murabits. Phil took the Murabits because they had a new Tuareg Camel element that needed blooding. He likes camels. 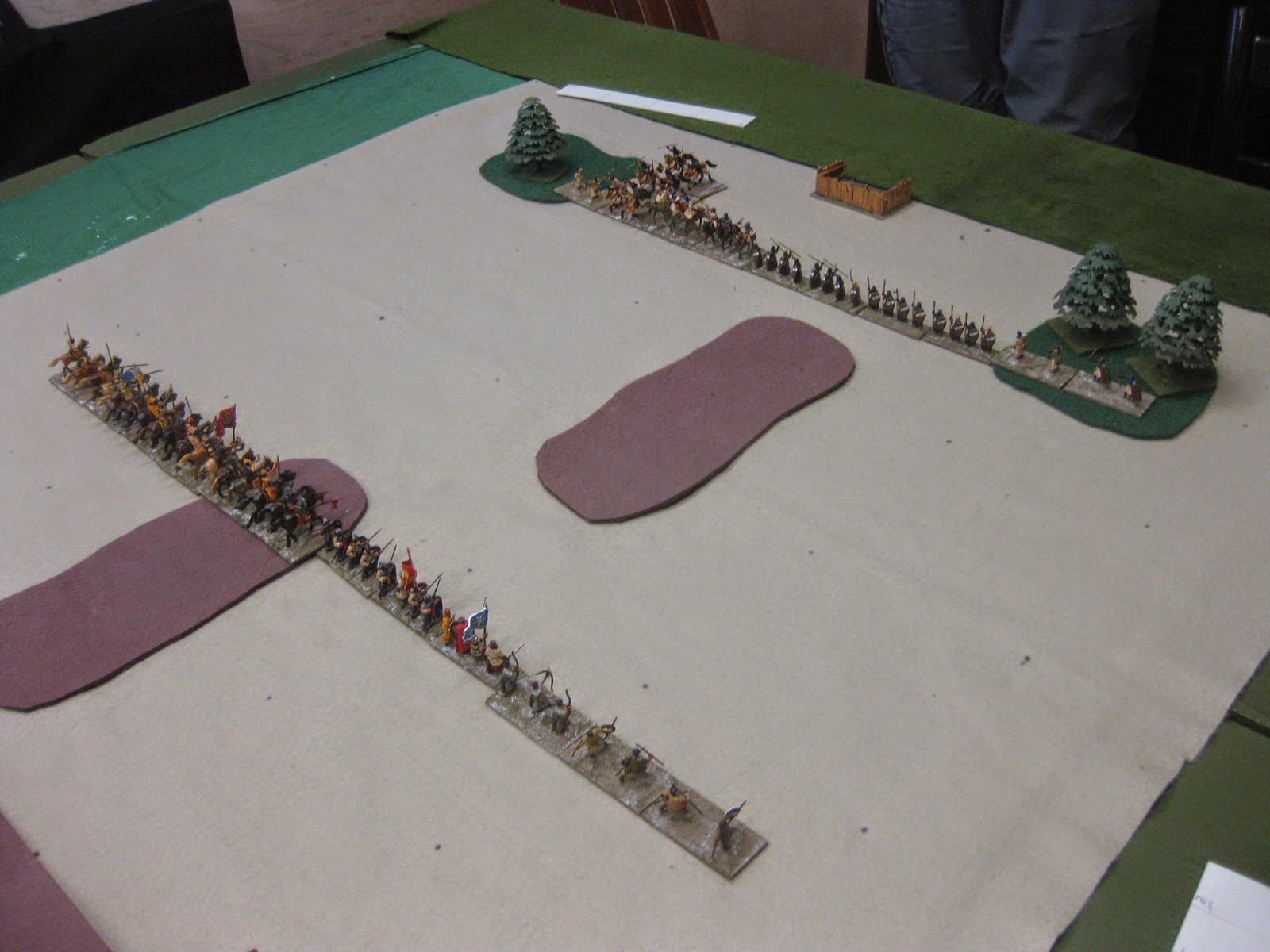 Phil won the aggression thingy and I set up the table. Those brown blobs are ploughed fields. I went first and rolled a "1" for my PiPs, making the ploughed fields bad going. Any how, I just advanced the whole line in an effort to get to grips as soon as possible. 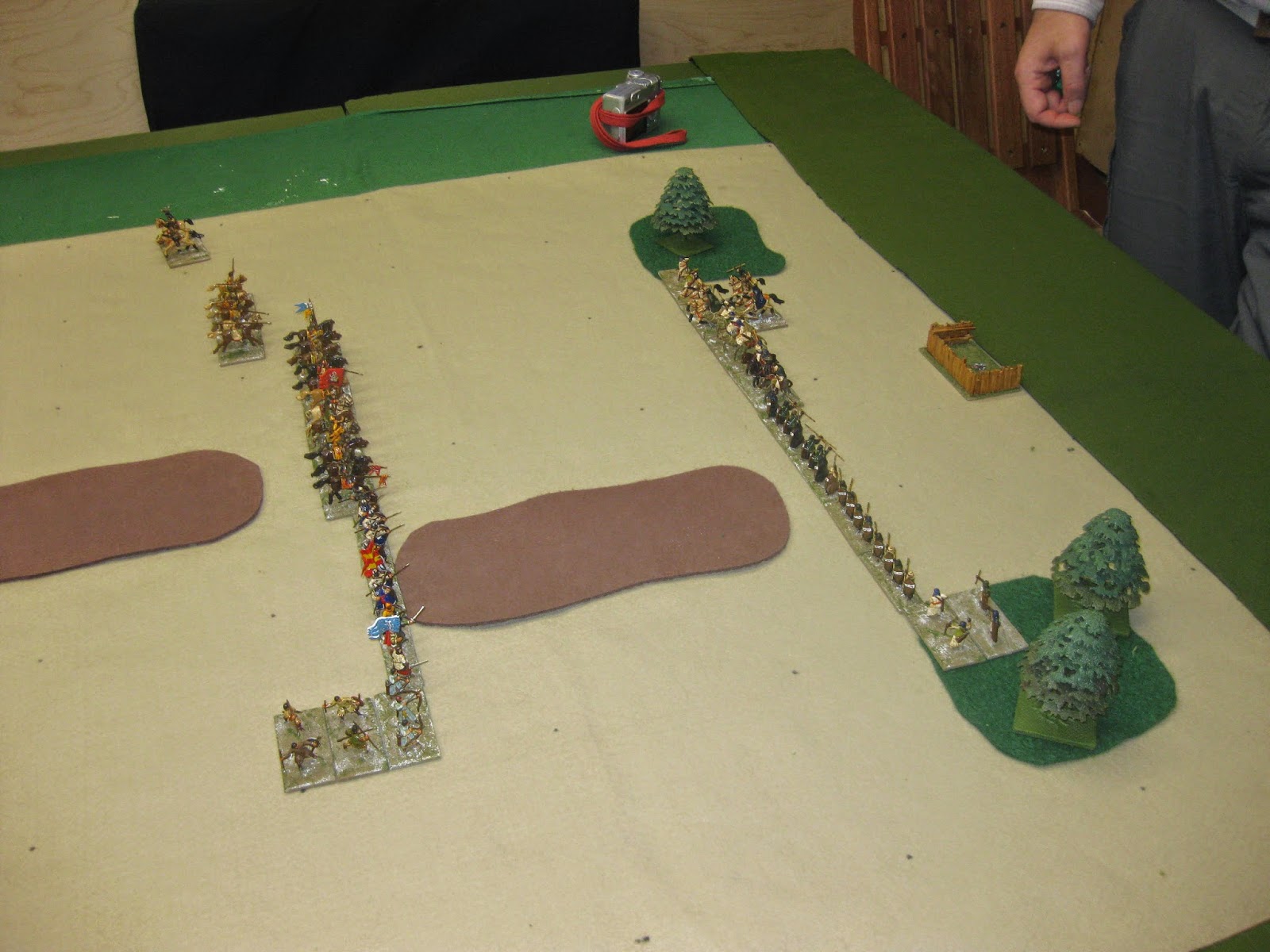 Phil rolled a 5 for his PiPs, and set up his defensive line whilst trying to get round my flank with some Light Horse. 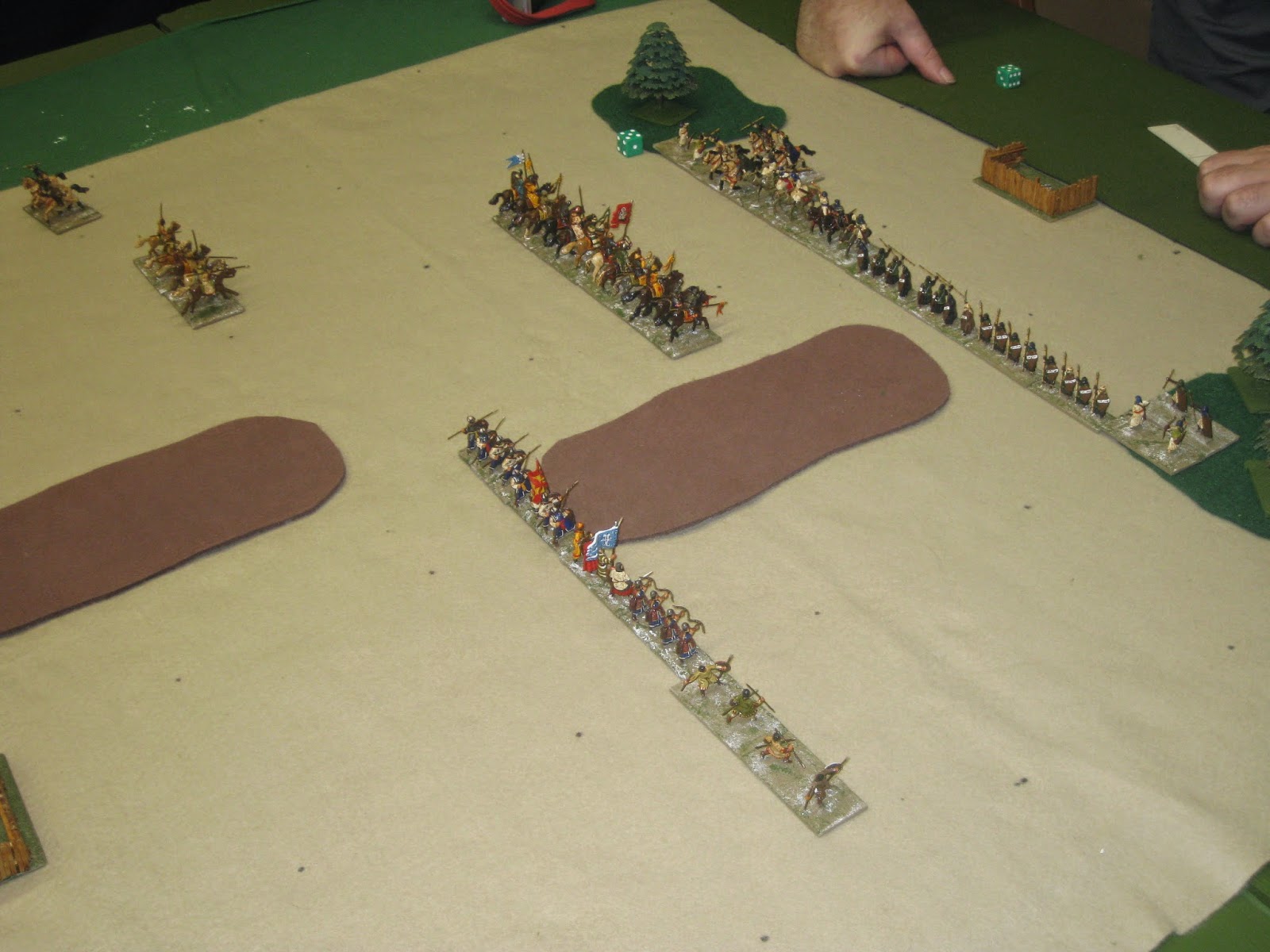 I kept rolling 1s for my PiPs which was all I needed to charge my heavy horse straight at Phil's line. 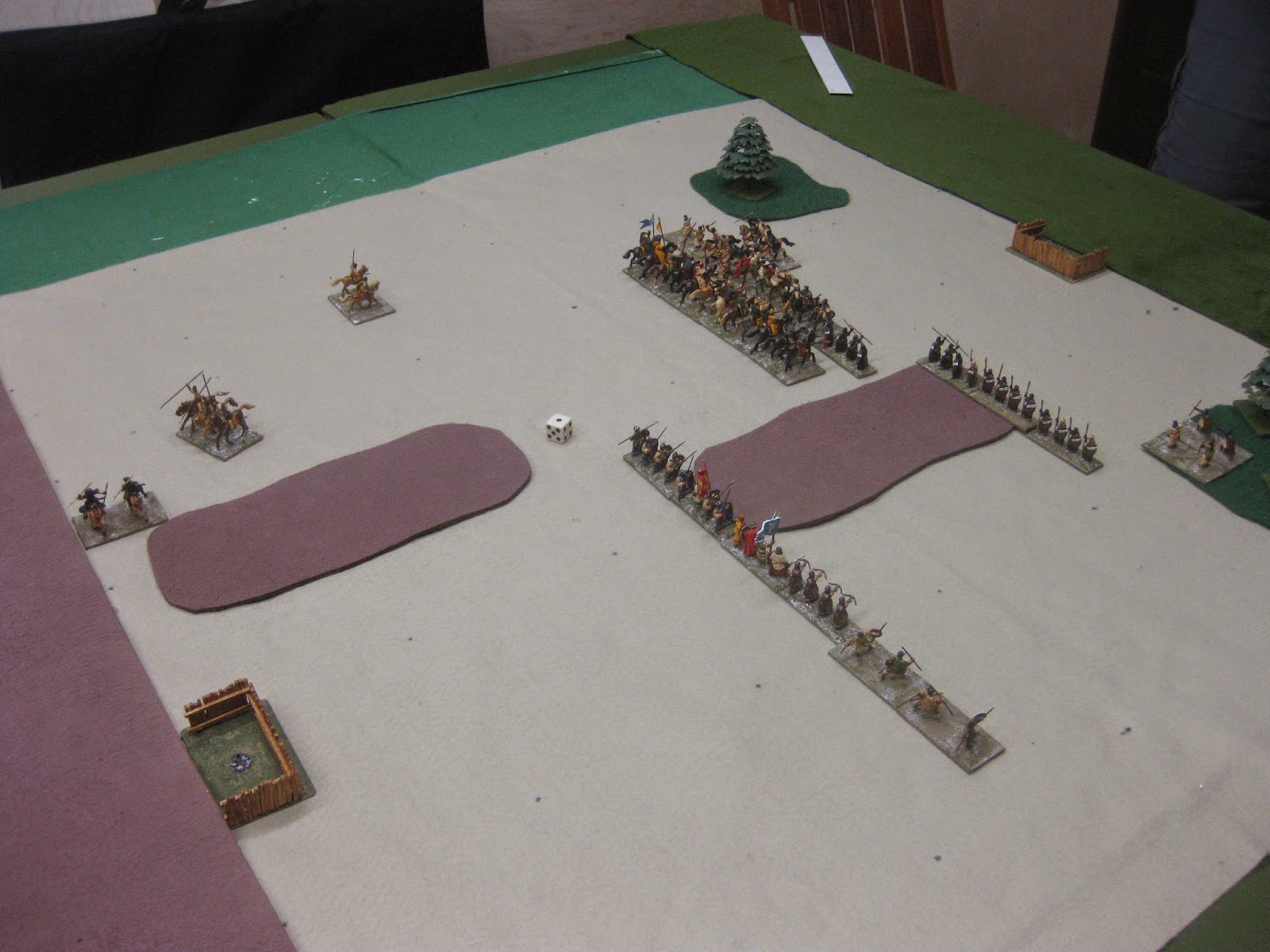 I was a bit concerned that Phil was going to sack my camp, so I turned my caballeros villanos to cut him off. Luckily Phil had mistimed his move and I was able to get him in a threat zone, so he had to fight my horse, rather than overrun the camp. 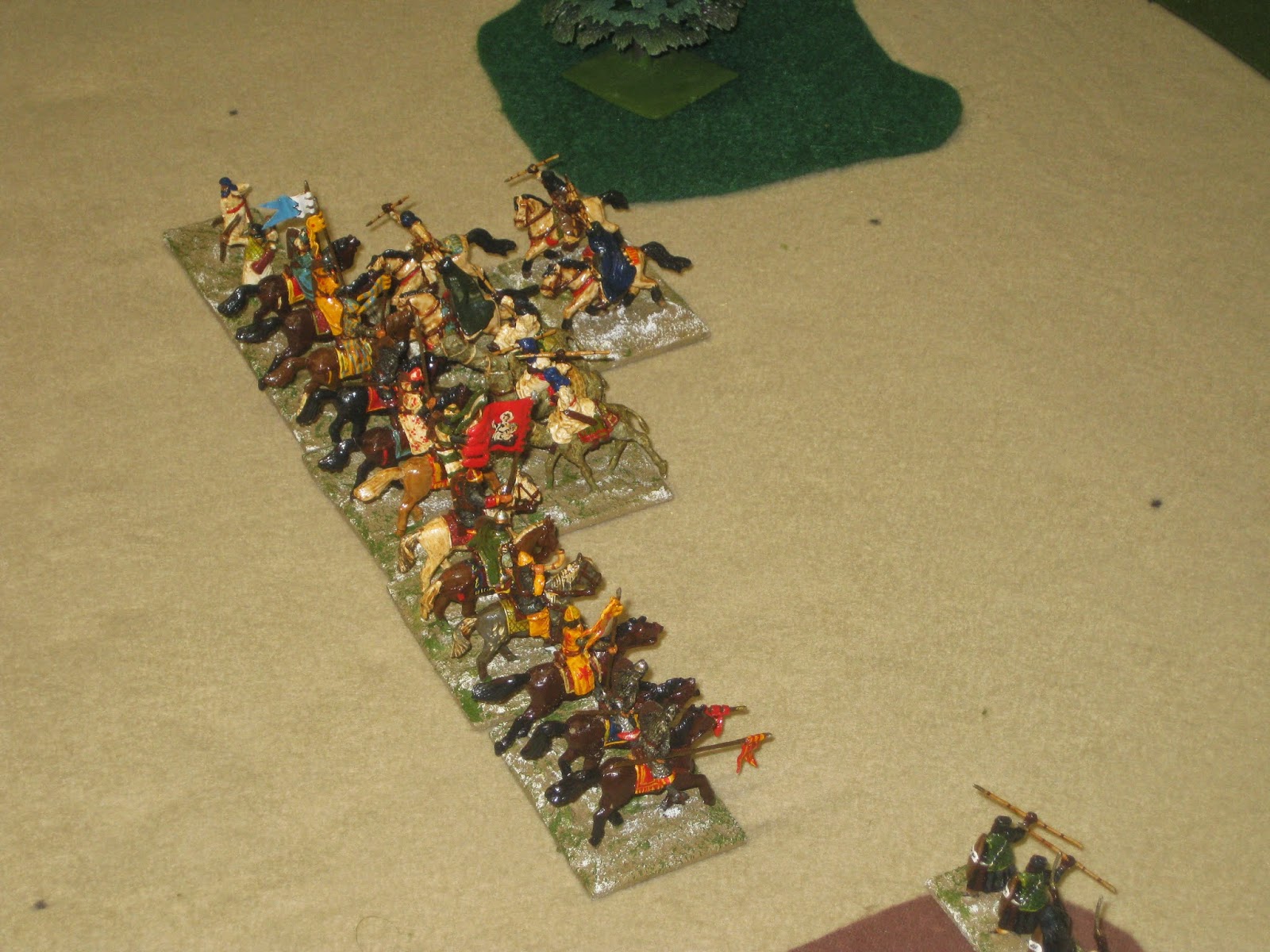 When the lines collided I out rolled Phil in ALL of the combats. So he lost some elements, including his General who had been matched up against mine. 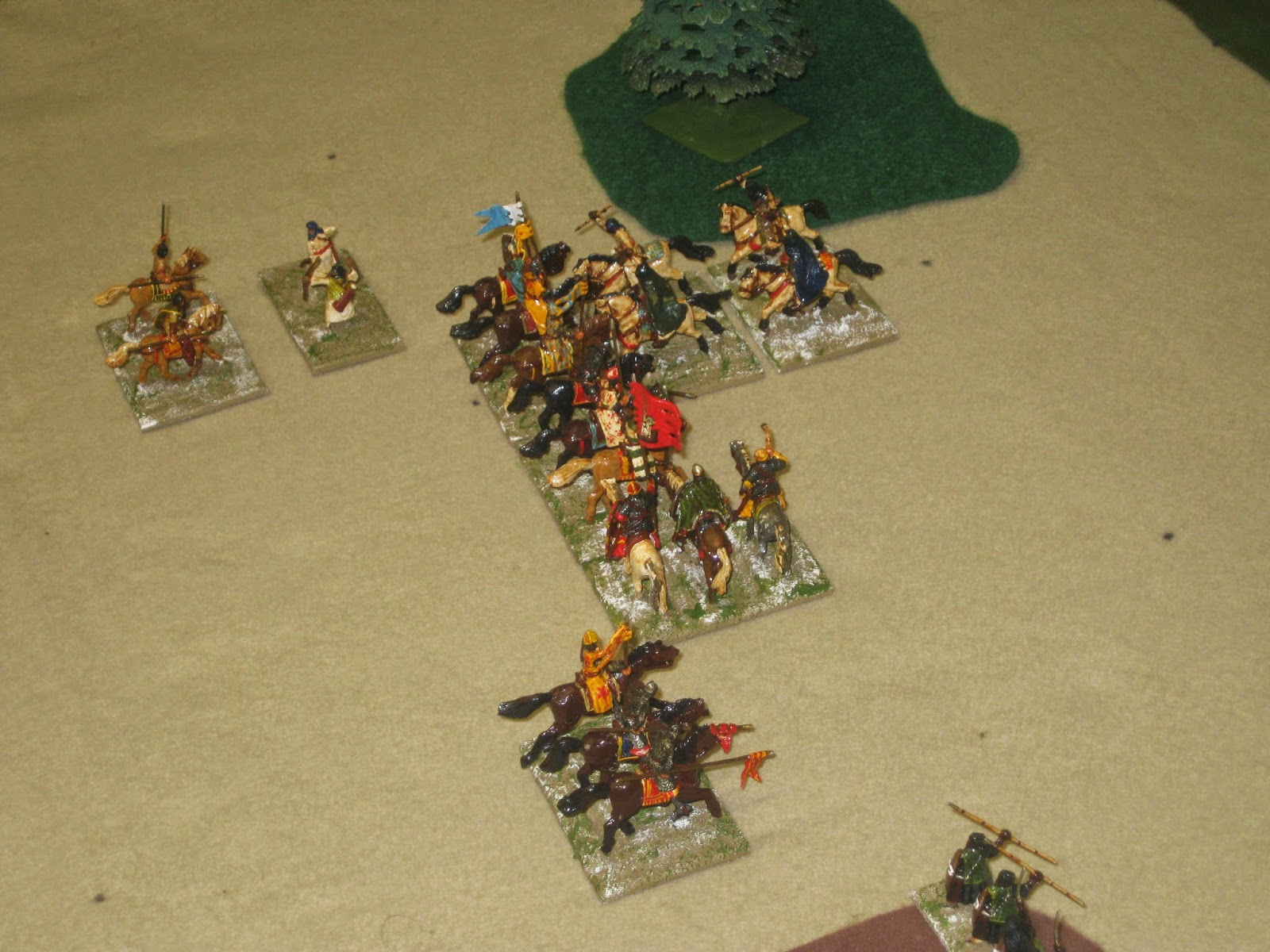 I did the same in the next turn and so won the game without losing any elements.

We had a look afterwards at the Army Lists we are using for these armies and it's clear that the Murabits (and the Andalusians) lack some firepower. They need to get favourable terrain for all their light troops, but the Murabits in particular suffer from having high aggression so never getting to lay it out.

They have access to allies, including Feudal Spanish, so the answer may be to max them out with three elements of Christian Knight allies. Which means I have to get another box of El Cid Spanish Heavy Cavalry.