Finally managed to finish my Andalusian DBA 3 Army (III/34b). This doesn't have all the options, alas. There are no Christian mercenaries as I need another box of Spanish Heavy cavalry. The ones I have are tied up in the Spanish Army. Having said that I've got some spare figures in the El Cid Spanish Command box, so maybe I can do something with them. 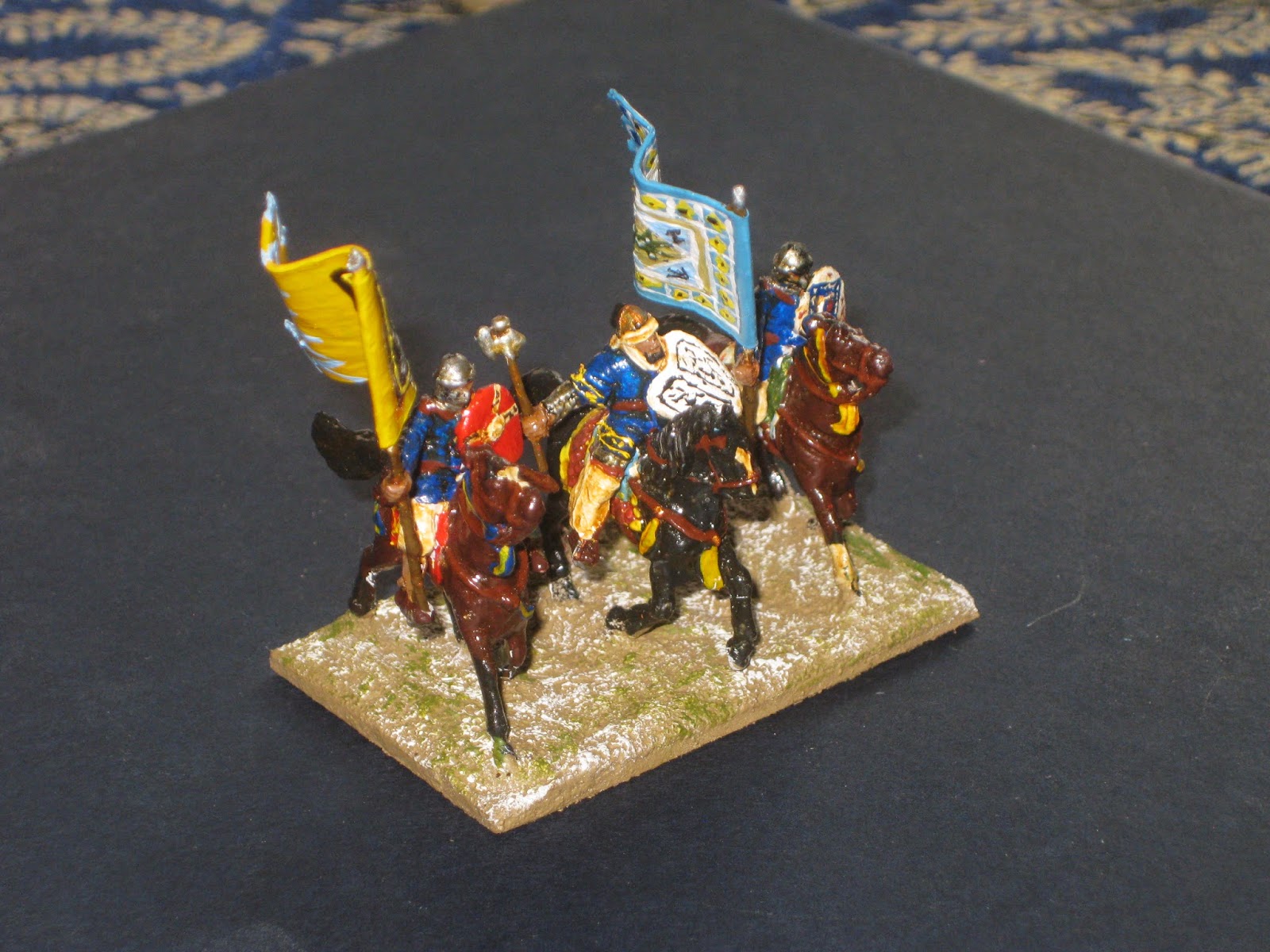 First up 1 x General (Cv). Banners are made out of a tomato paste tube, poles from florist wire. The thin tin sheet folds well but it is very stiff and a pig to cut accurately. It has to be put in place before you can paint it so I found these banners hard going. The General's axe has had the original plastic version cut away and the head transplanted onto a pin which was then pushed into the hand and cut off to the right length. 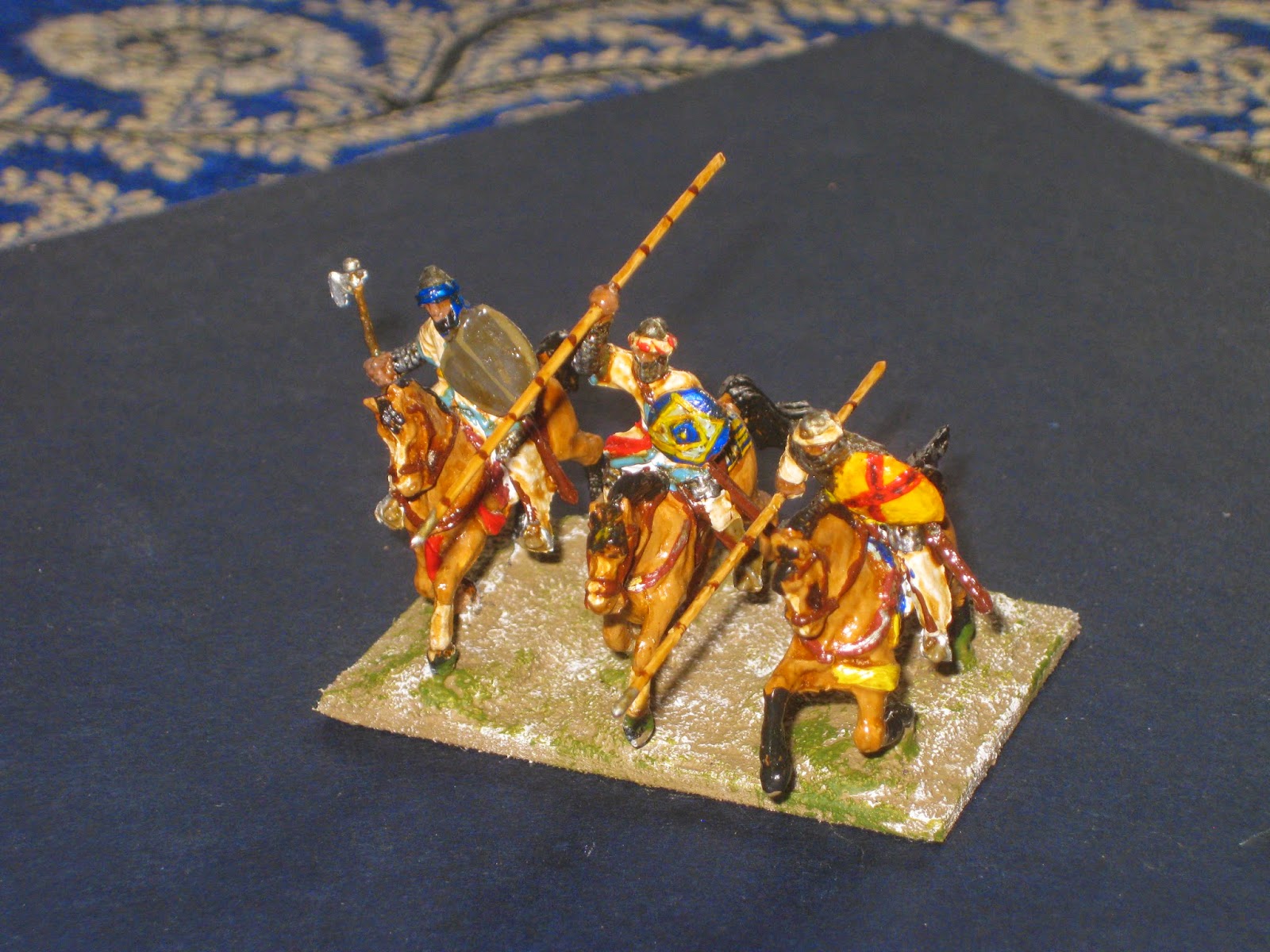 1 x Andalusian Cavalry (Cv). I like the poses and design of these figures. Spears are florist wire and I've done the same trick with the axe head. 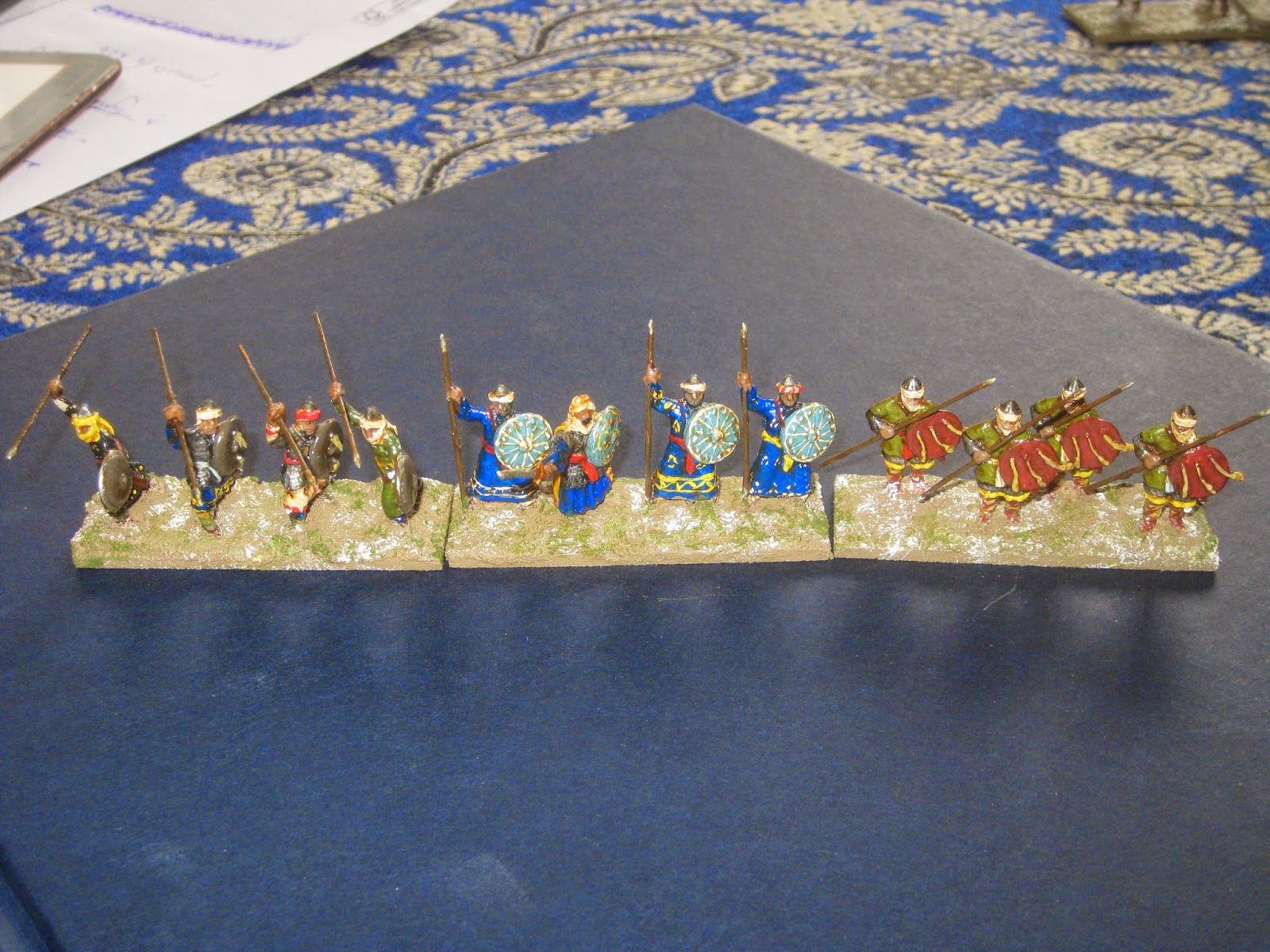 These are a mix of Black Guard and Andalusian spearmen (Sp). They include a number of axe wielding figures who have been converted to spearmen with pins. Everyone else has been suitably pinned as well. I like the figures on the right a lot, but there's only 4 in the whole box of 96, which is a bit of a shame as I'm not buying another 3 boxes to make an AMW unit. 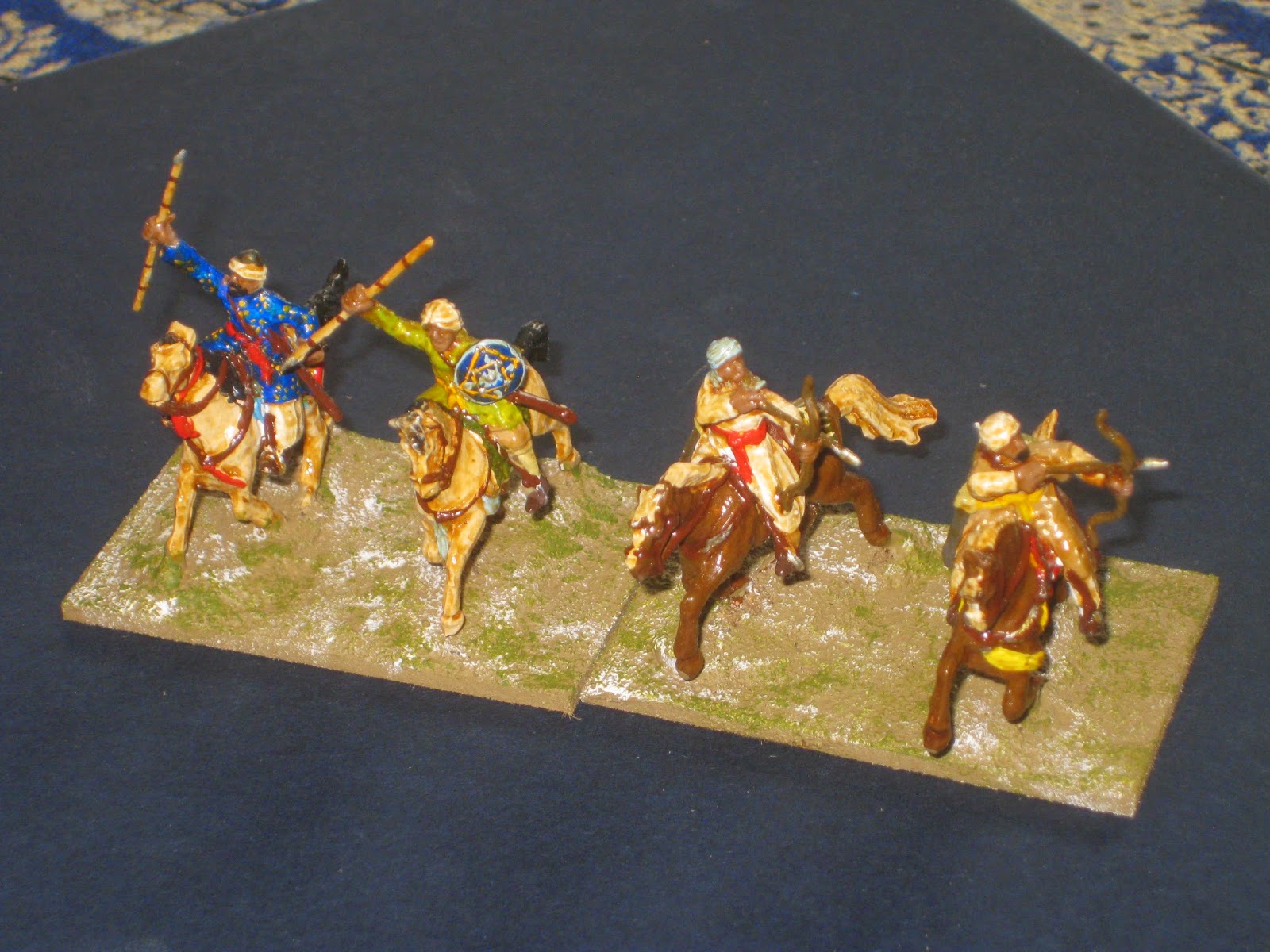 2 x mujahids (LH). Again with pins for spears. The overall colour palette for this army was mostly blue and green with red kept to an absolute minimum. Really stands out when it is used, however.

2 x archers (Ps). Not completely happy with the look of these, - especially the figure with the white hoops on blue. I had half a mind to repaint him & I think I probably should have done. The pose of the figure drawing an arrow from the quiver is good however. 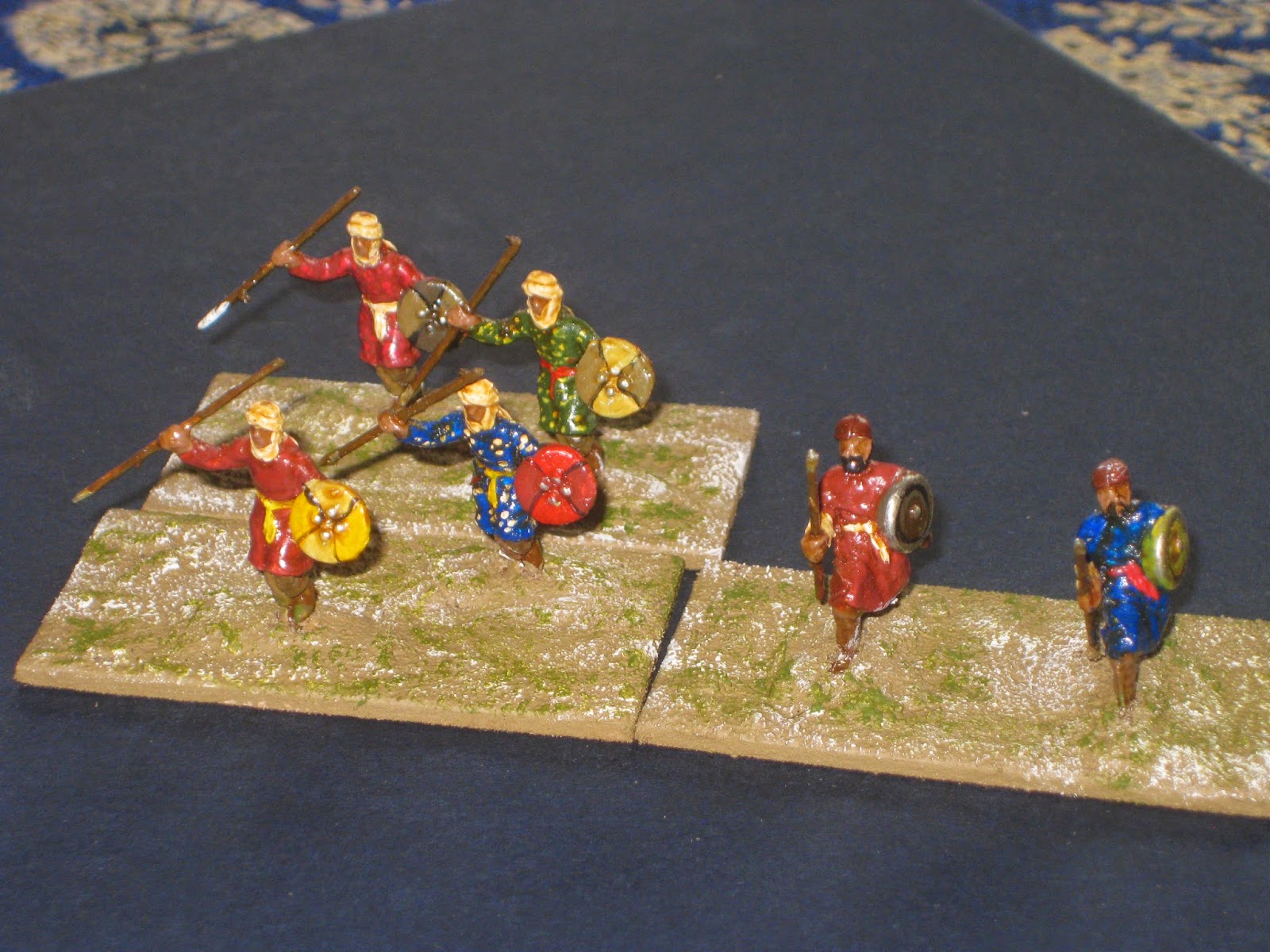 Finally 3 x javelinmen (Ps). The army list says these should be berbers, but I went for a more arab look. These are the most colourful figures in the army, again with pins for javelins.

Don't know how well these chaps will perform. There's a lot of light stuff in there and no real killing bases (no Kn or Bd) but you can never tell with DBA. Adding Spanish Feudals as allies might bolster them a bit.

What with working in London and stopping to do the Taipings these three armies based on the Hat El Cid range have taken longer than expected. I'm pleased with the overall look of them: 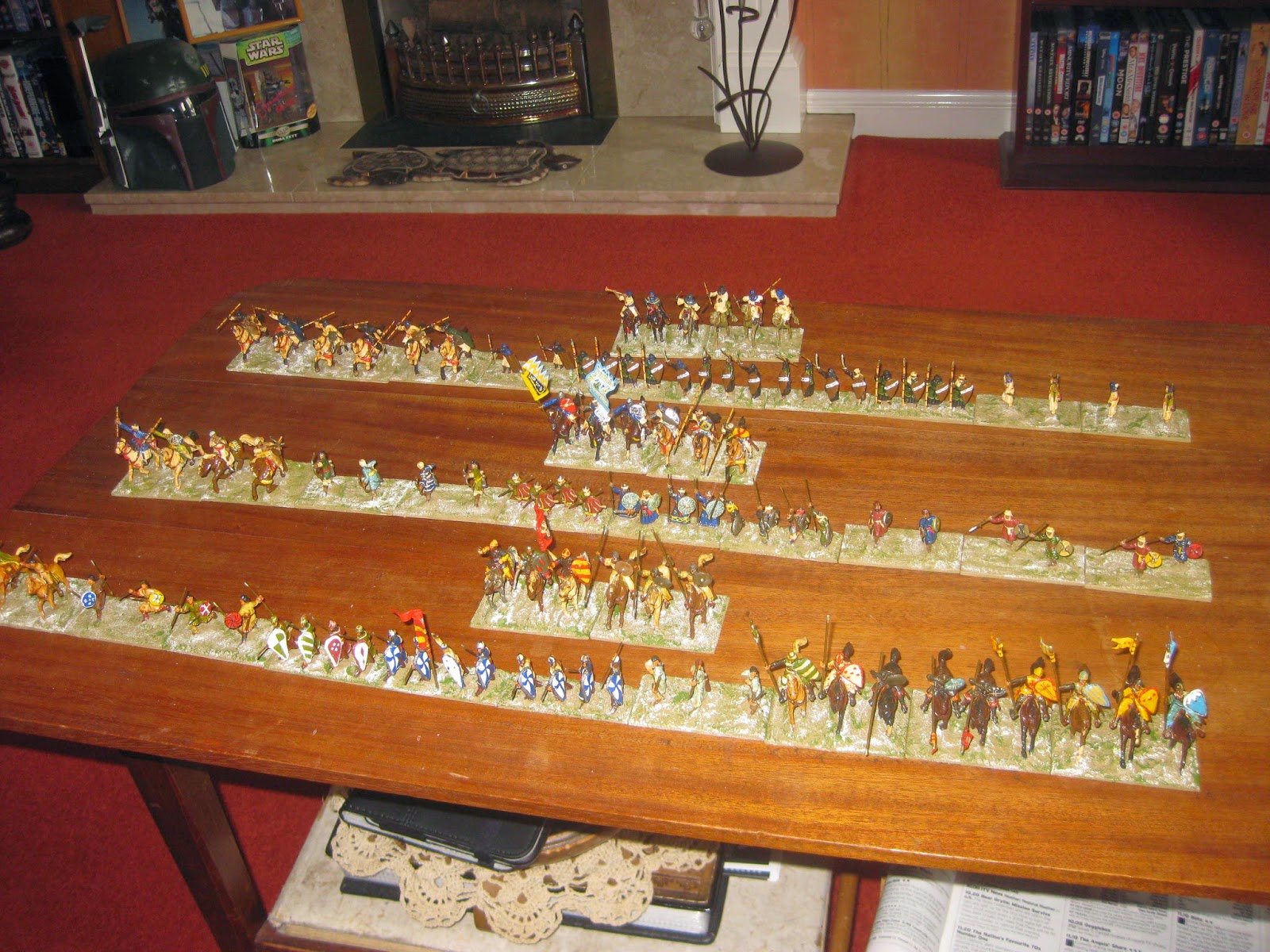 That's the Almoravids (Islamic Berber III/75) at the back and Feudal Spanish (III/35b) at the front, with the new guys in the middle. 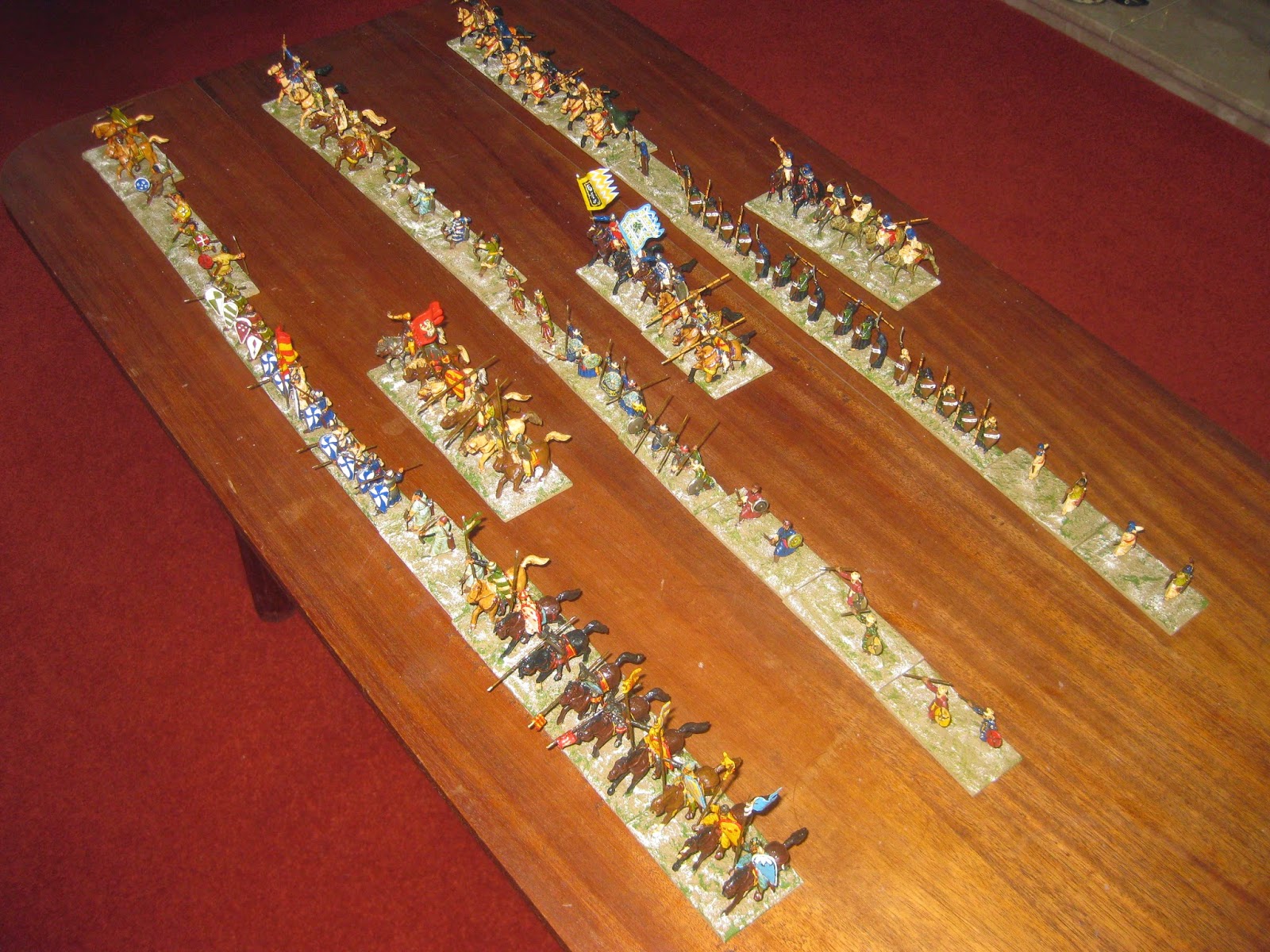 Having got this far the next step is to ramp up the numbers for AMW. I've already started with the Mujahids and have a couple of completed four base units. Of course I need to decide on the army composition first really, rather than just paint all the stuff in the boxes I've got (although that technique often works as well). As indicated above I'm a bit light in some areas and over supplied in others - mainly arab/Moor heavy cavalry.

This will all be blown of course when the Peruvian & Chilean forces arrive so they may be added to intermittently rather than consistently over the next 12 months. Still, who's in a hurry?

Finally I must say thank you to blog follower Jim who made me the gifft of these figures. They've been a joy to work on.
Posted by Trebian at 16:41