It was a Good Friday after all

A Good Friday break from work gave me a chance to open up Shedquarters. Phil still needs to do some work on his Yarmuk DBA refight so we agreed to pick that up in the afternoon. Whilst I was waiting for him to arrive I thought it might be interesting to re fight Hydaspes using AMW straight, without any of my various additions over the years. 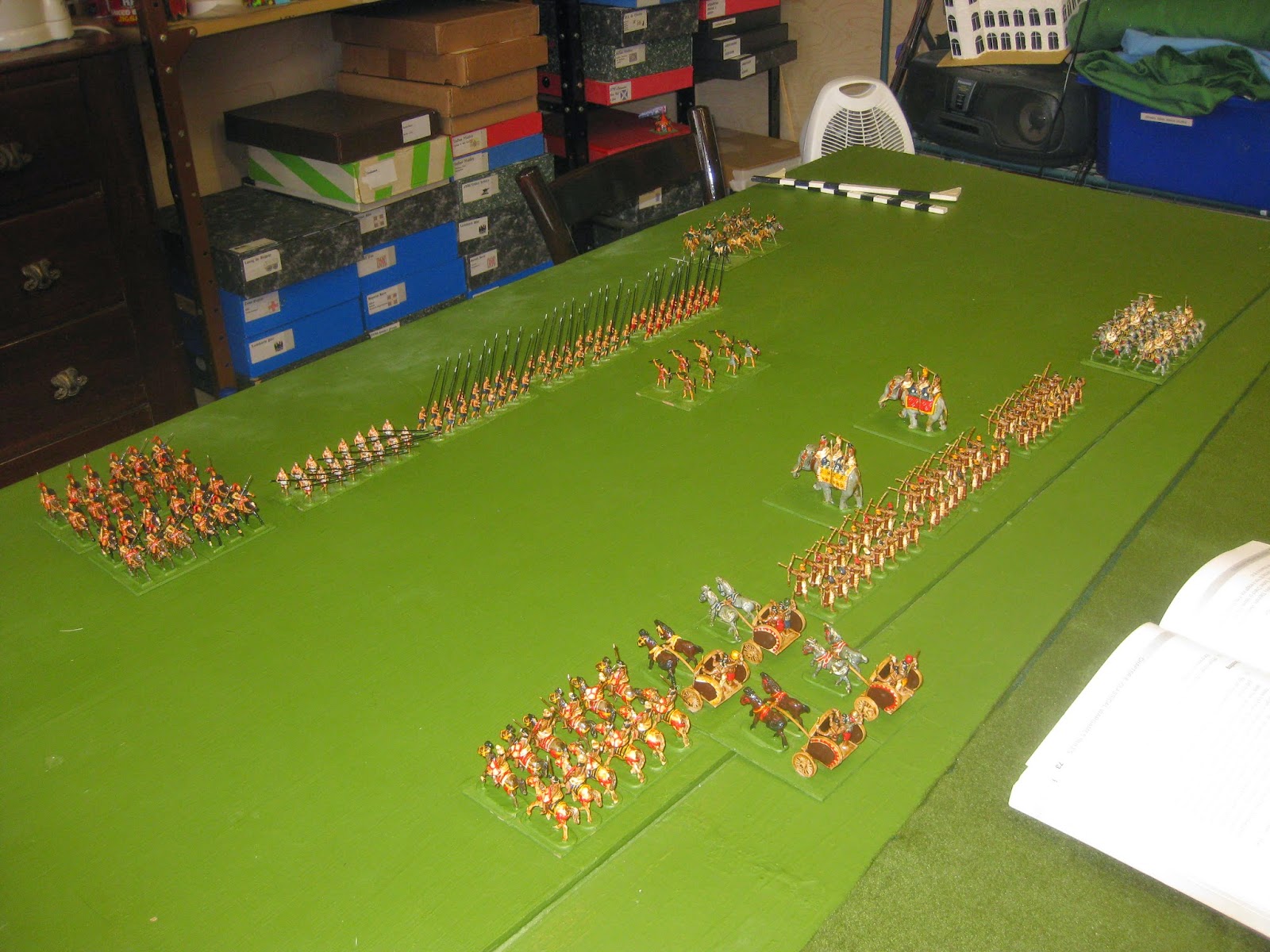 As its only 8 units a side compromises have to be made. Alex ends up with just a light cavalry unit on his left and the Indians only have one unit of chariots. 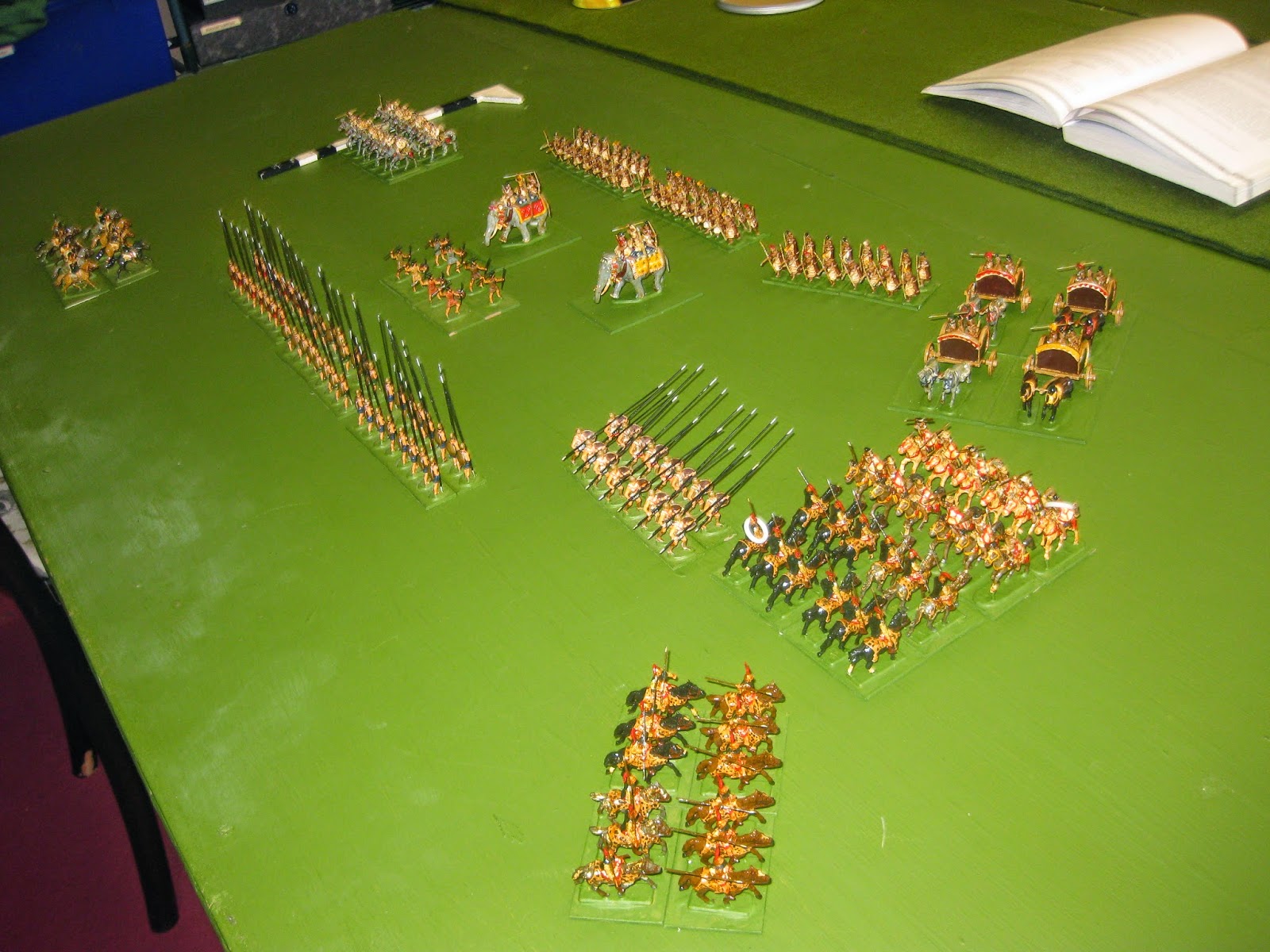 It's not a subtle battle. The Macedonian right wing has some fancy manoeuvring as the Companions try to avoid a one on one with the chariots but otherwise its fairly head on. 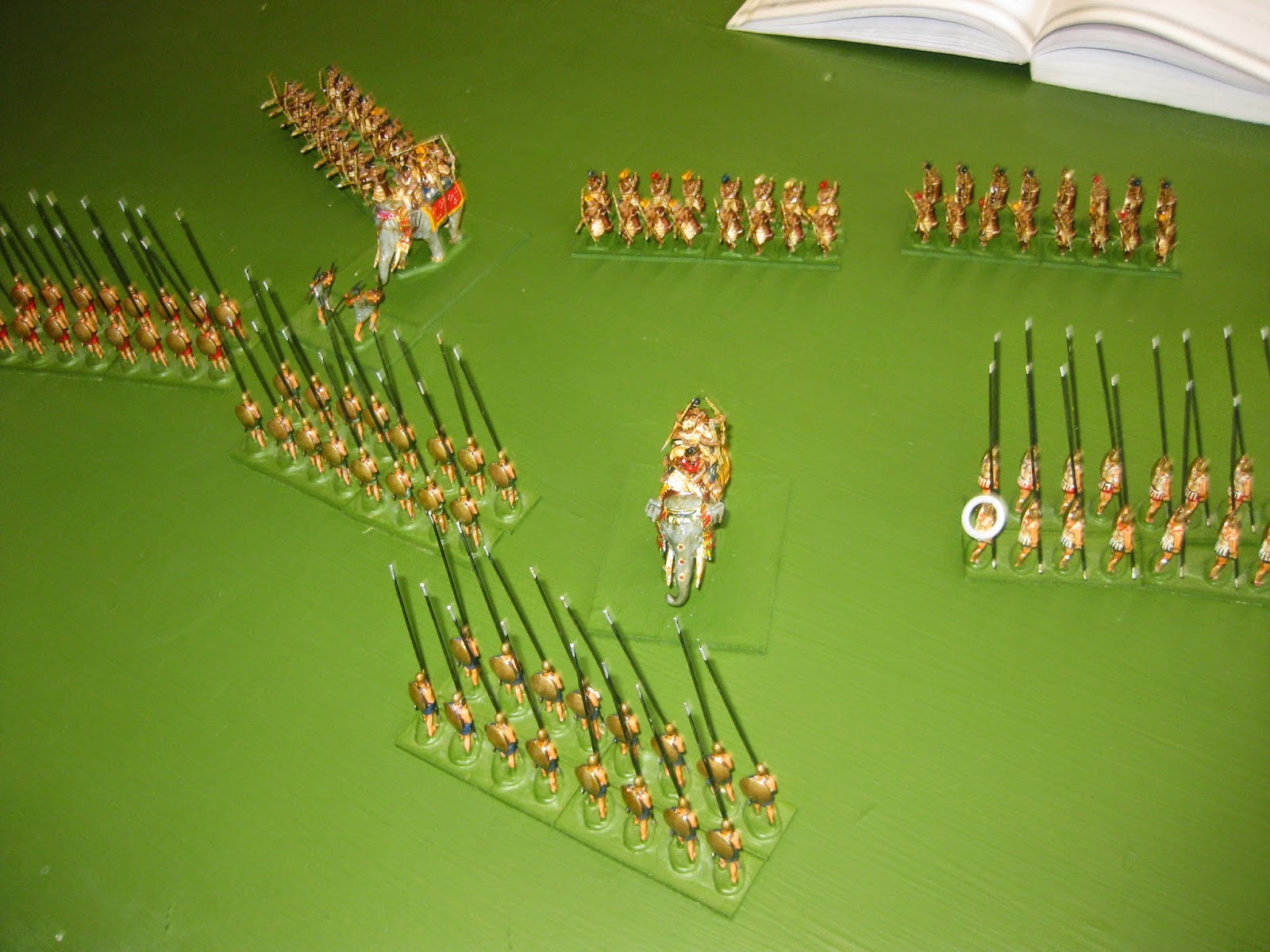 In the middle the elephants start an all out assault on the main Macedonian line. 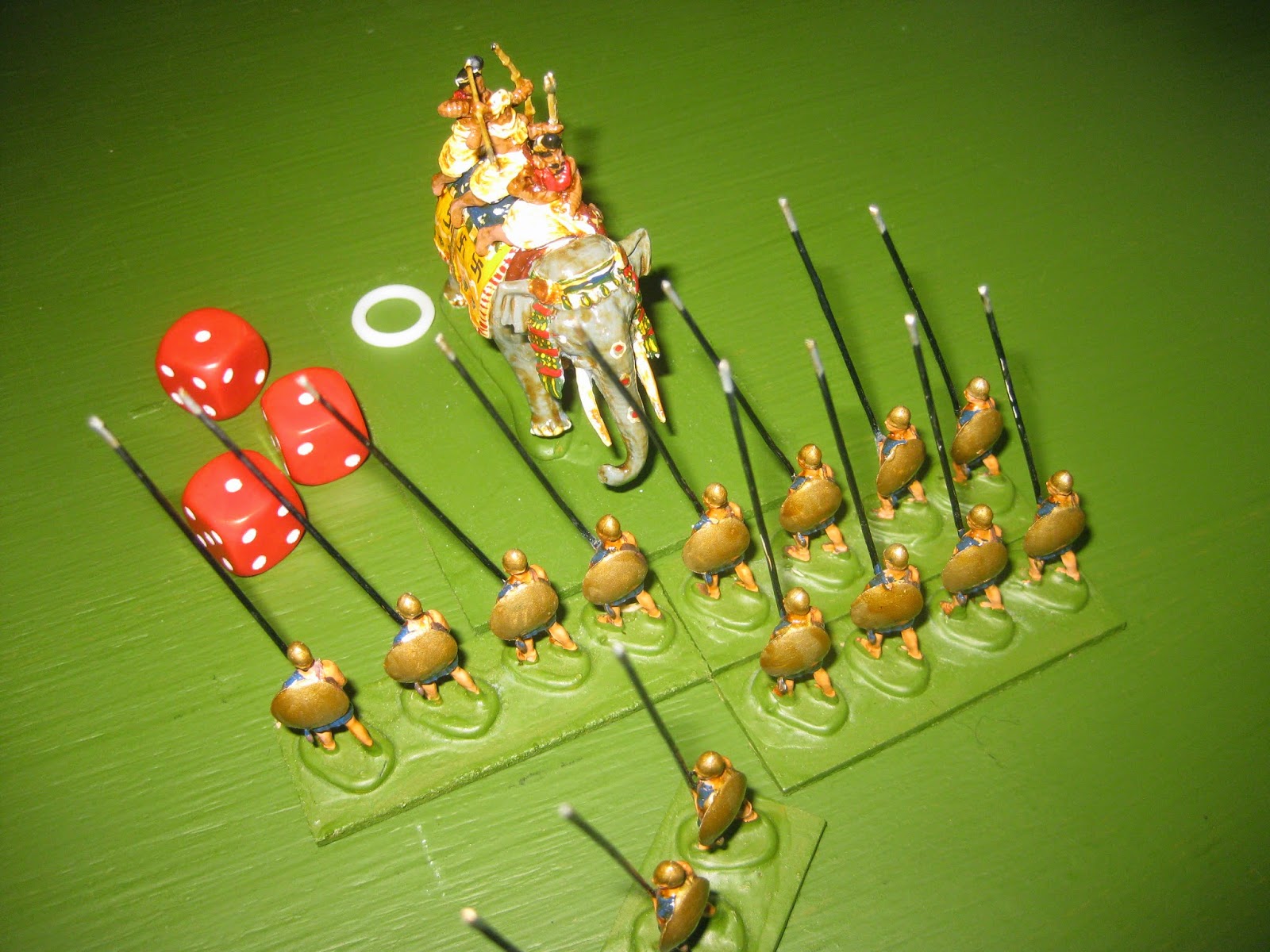 At first it looks like it's going badly as one elephant fails three saving rolls and promptly dies. 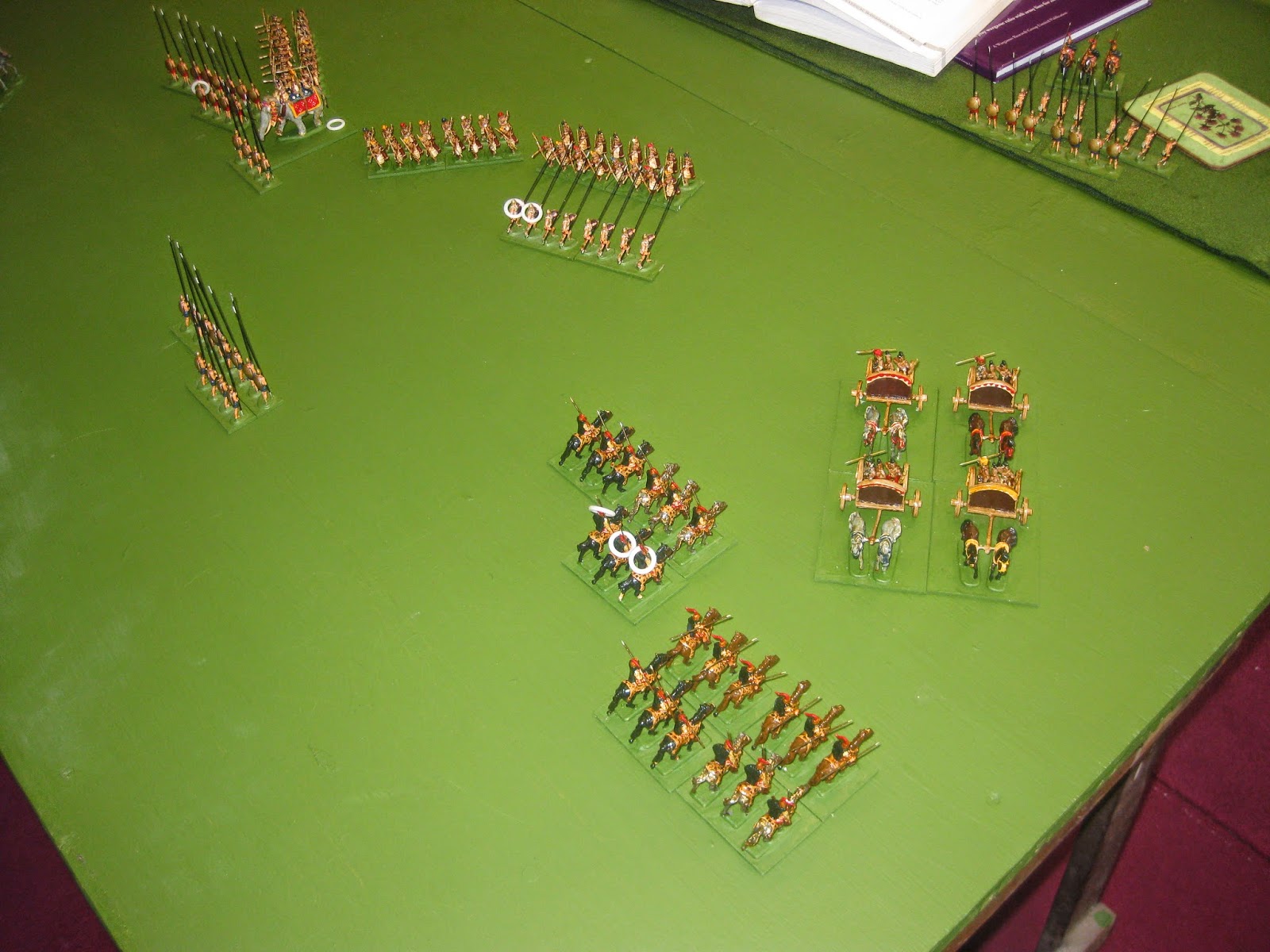 On the right the Indian cavalry succumb to the Alexandrian onslaught and it looks like they can get two on one with the chariots. 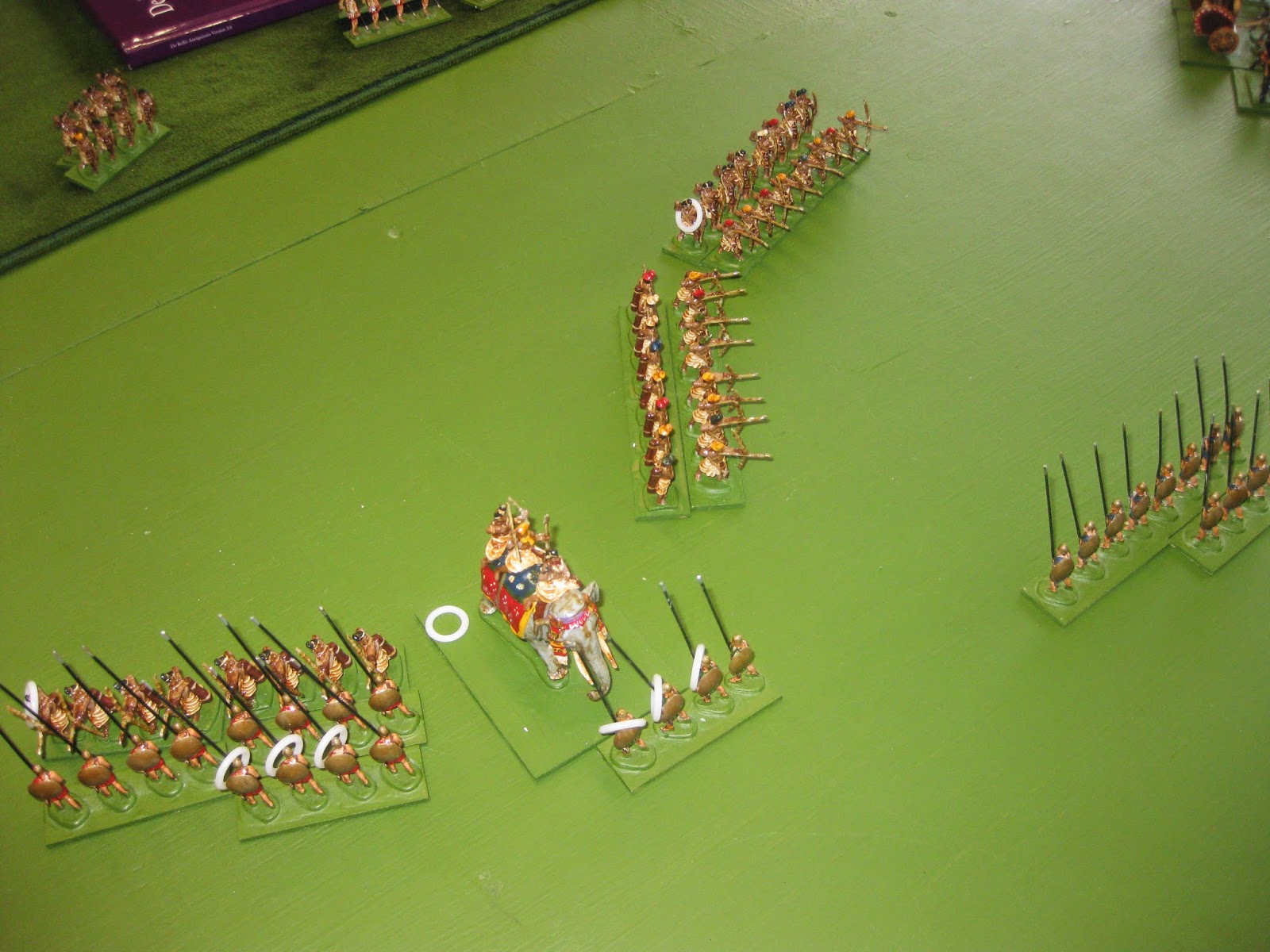 The remaining elephant is doing stunning work, apparently invulnerable, churning its way through the phalangites. The bow units perform creditably in the shooting phase as well. 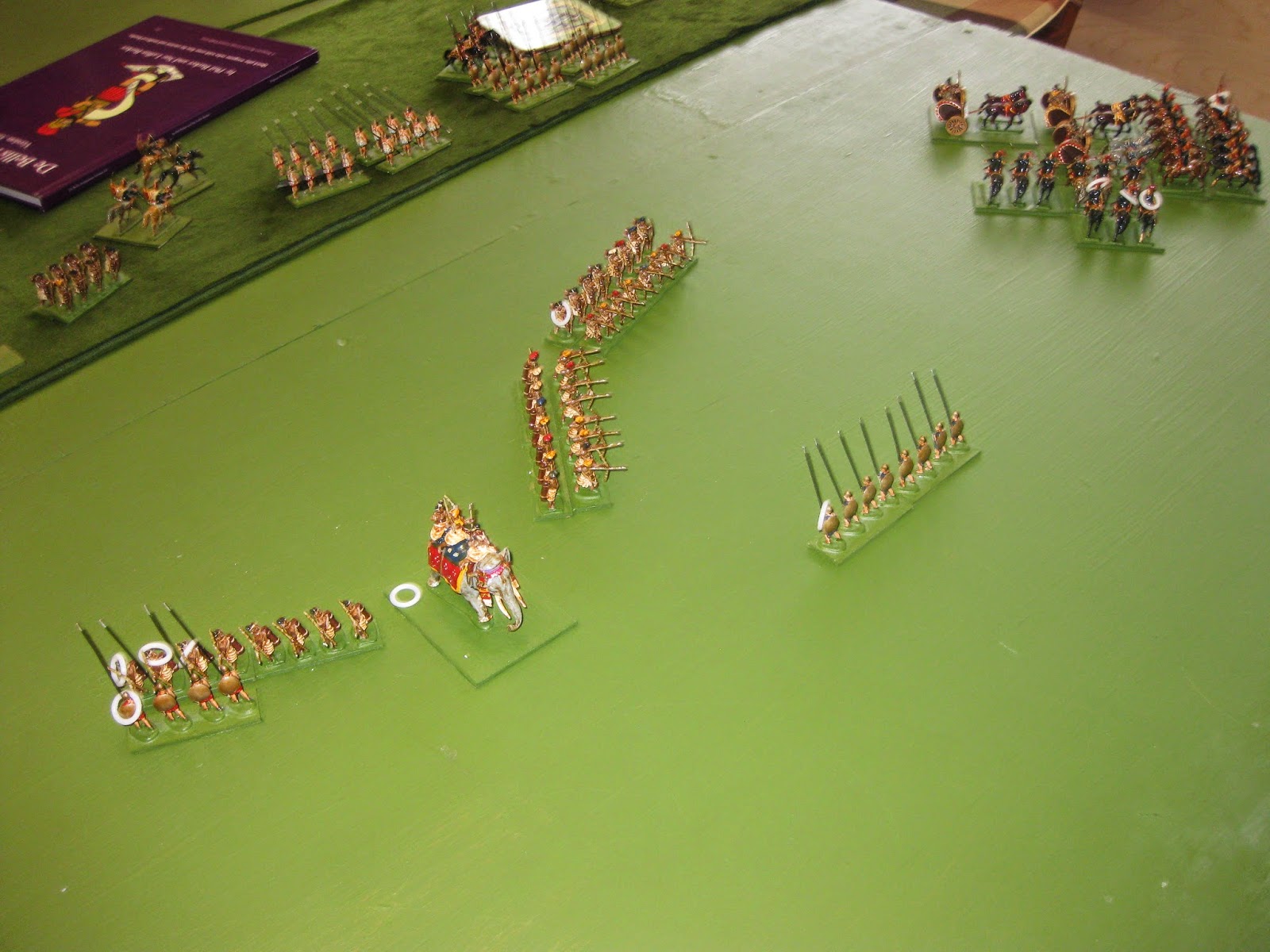 Half a phalanx shot away and another crushed by an elephant. Not looking good for the invaders. 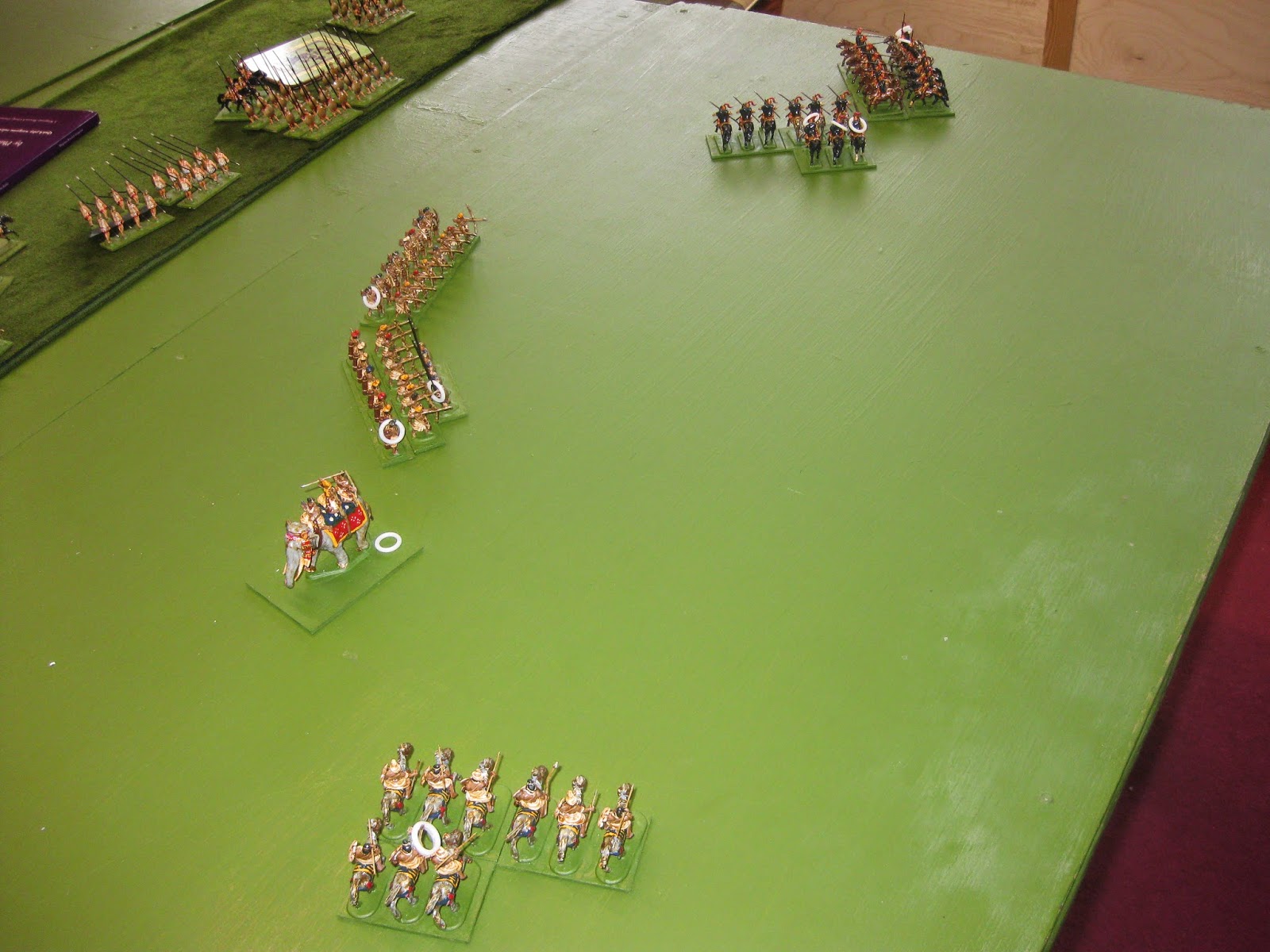 Another phalanx crushed by an elephant and if you look closely you'll see there's one last base of the other unit just in contact with the archers. Still, the chariots have been seen off and that leaves Alex with two units of companions and one of light horse out of the photo at the bottom. 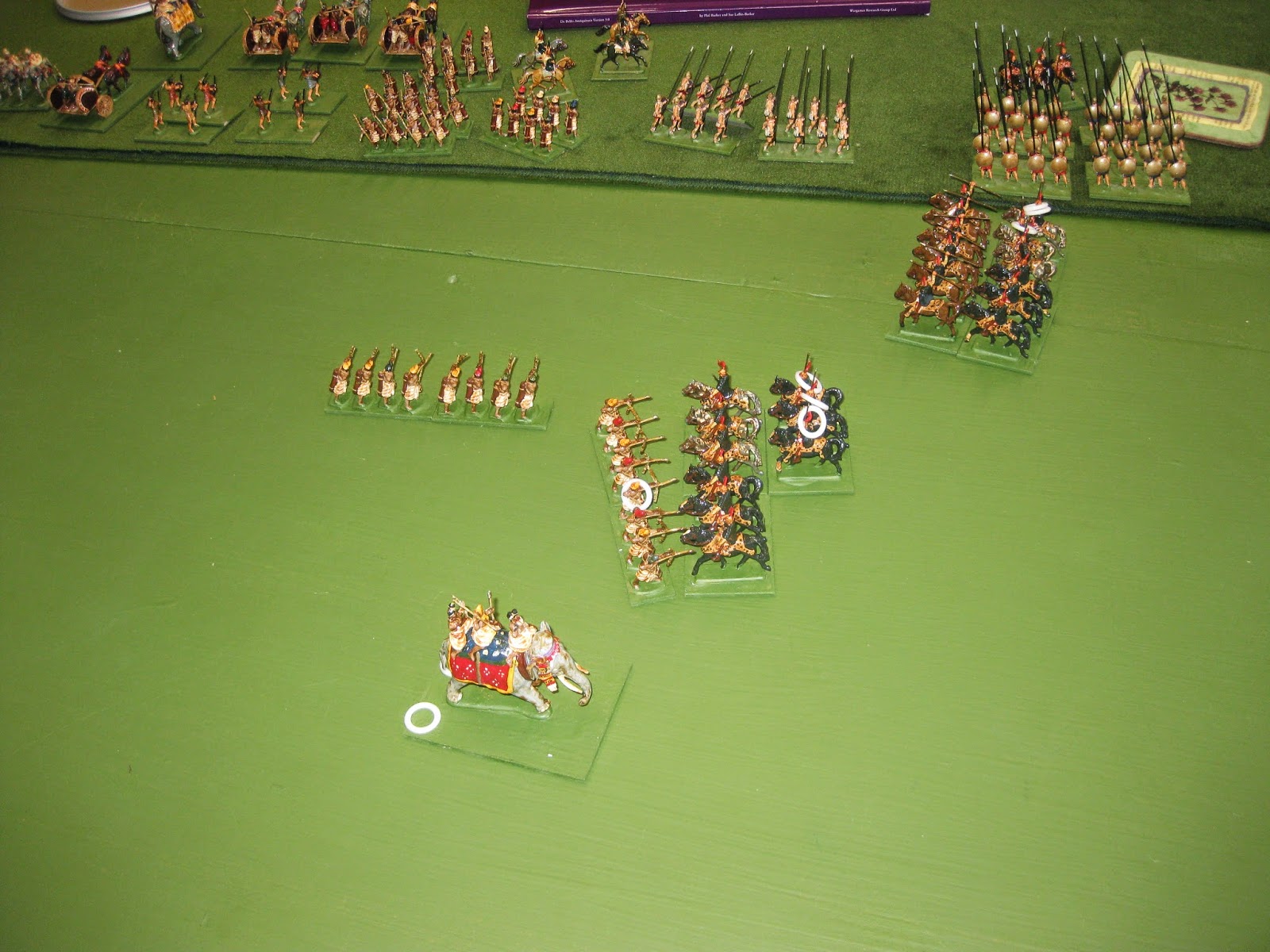 The race is on to see if the Companions can hoover up the Indian Heavy Archers before they lose another unit to the elephant. 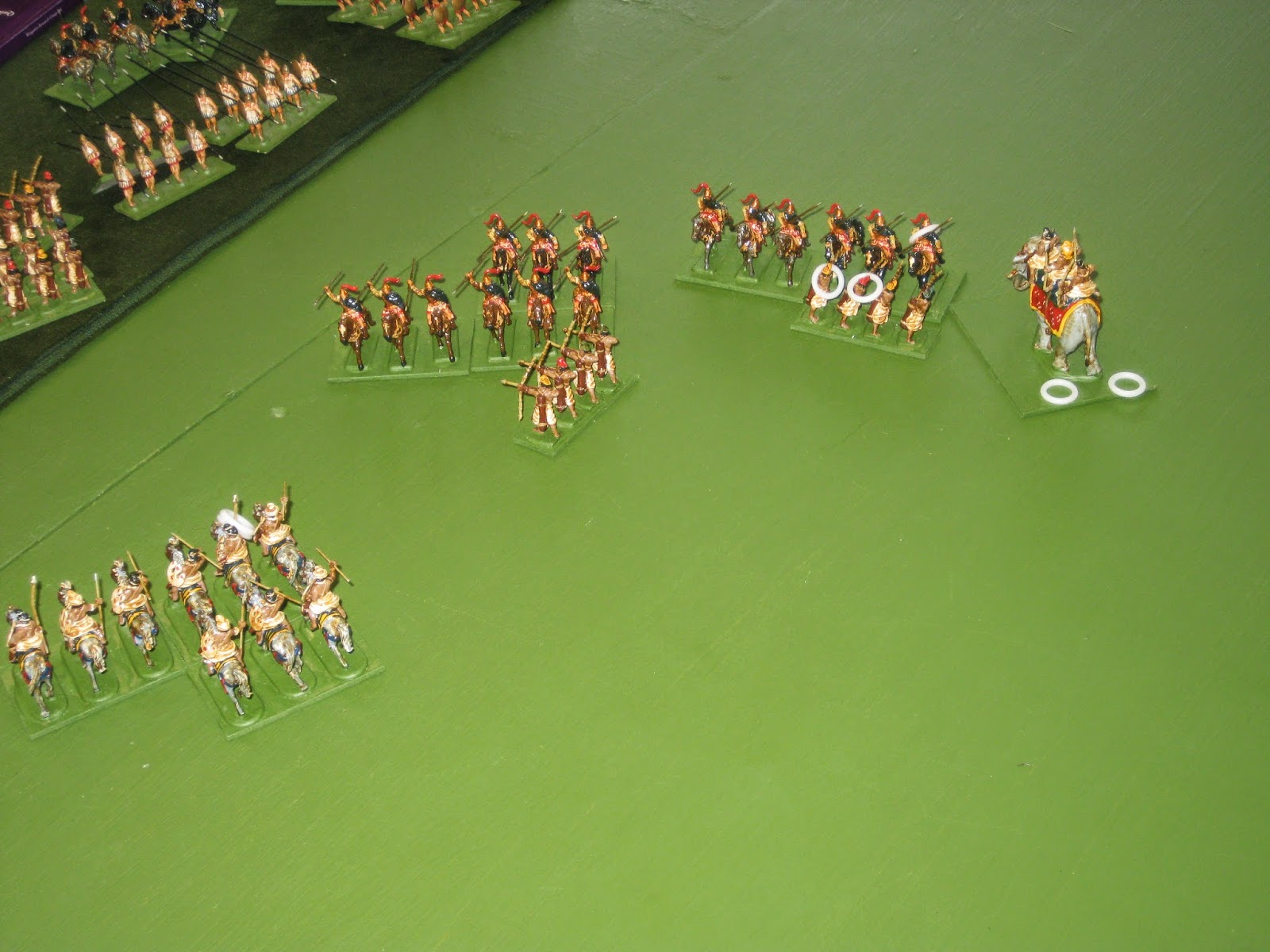 Hanging on by the smallest of margins the archers are still there when the elephant comes up and catches their opponents in the flank. 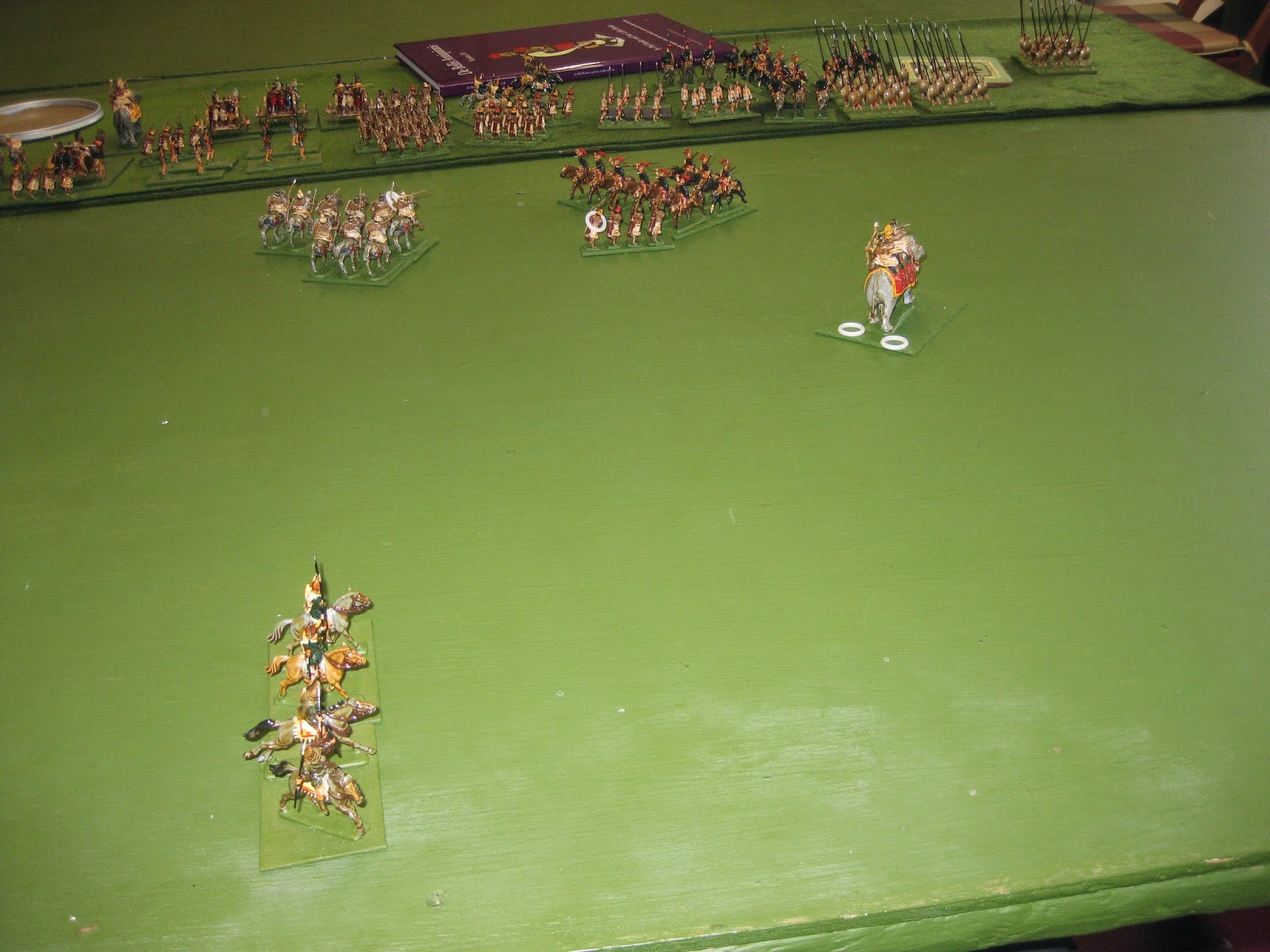 And that's it. A 3-2 win to the Indians. A very close game that could have gone either way. Perhaps a better outcome than the game at Bletchley?

Just as I finished Phil arrived with Yarmuk. I have no pictures of the game. We played it twice with me as the Byzantines. I won the first game fairly easily. As we reflected on this it became clear than the games we had played featured Byzantine wins on a regular basis with the Arabs infrequently troubling the scorer. The flank march was actually a liability as it got crushed by Byzantine reserves and the Arab holding action in the centre wasn't a great success either.

A discussion of what we wanted to see led to an upgrading of the Arab foot from Blade to Spear and a repositioning of the Byzantine reserves and commanders. The next game then gave us an Arab victory and a much more satisfactory game narrative.

All Phil has to do now is finish the figures, take some more pictures & write it up.
Posted by Trebian at 10:54