More from the Russo-Turkish War

This post is a bit out of sequence as we played this game last Bank Holiday and I've been doing other things and evenings have been a bit tight for time (especially as it was after this game and the following attempt to do the Battle of Northampton that I had to completely re-write the latter rules). 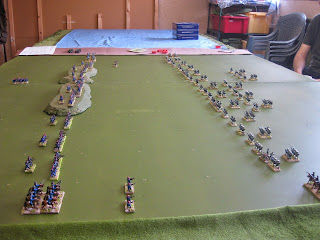 A simple scenario was laid on. The Turks are on a ridge line, the Russian are going to attack them. We may have been here before. What can possibly go wrong?

I was the Russians again. We were trying the squares options I've written about before. You may not be able to see it in the pictures but my green mat now has very discrete brown dots painted on it to create squares.This enables us to be a bit more creative with unit formations. Neil Thomas (for we are using a variation on his 19th century rules) represents attack columns with skirmishers as just the column. For this game we show the skirmishers as two advanced elements with the remaining two as a column behind. Firing lines are three elements with a fourth command stand behind. Cavalry are unchanged. 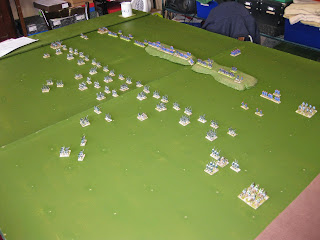 As usual, being Russian, I started with a general advance everywhere I could. Because the Turks were on a hill I didn't mask my guns immediately. 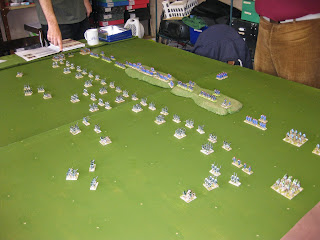 My shooting was not as effective as it has been. Chris has discovered that in a change to doctrine the Russians no longer massed their guns, but spread them out in penny packets. I was thus unable to blast a hole in the centre of the Turkish line, 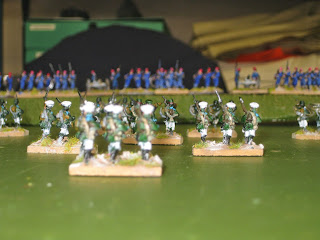 Since we last played Chris has painted some white caps on his Guard troops. They look nice. 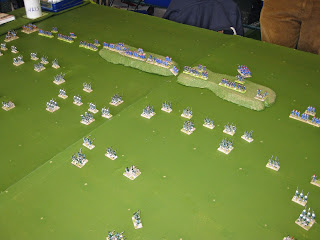 I press forwards, into the hail of shot and shell. Being Russian I am largely not bothered by this and the increasing piles of corpses piling up. 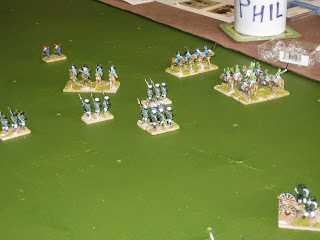 By this time the photo evidence would indicate that Phil has arrived and has taken charge of the Turks. He is doing his best to get out of the way of my superior cavalry (well, dragoons actually) and slow me down. This is important as my cavalry are my best troops and my main hope is to turn the end of the line. 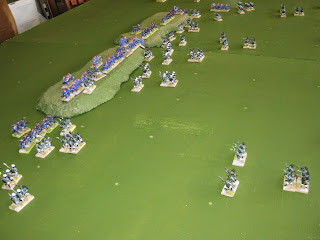 Soon the armies are almost at bayonet point all along the line. 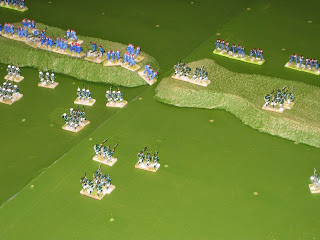 I'm being well shredded at this point, but I include the photo mainly so you can see the brown dots on the mat. 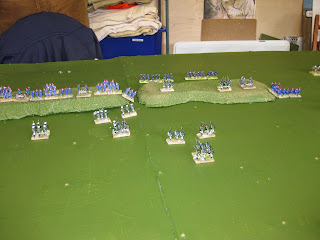 I'm starting to run out of units. Again. And I can't crack the ridge position. I need some new tactics, but alas I'm Russian. 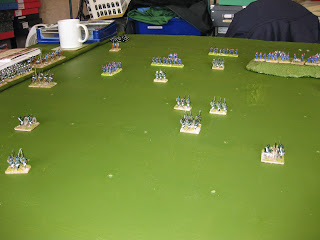 Game end, and everything Russian is either dead or fleeing. Curses.

I think we are getting there with the rules and the squares. A bit more scenery would help as rifle fire is quite nasty when you are in column. And it'll be good when Chris has done the standard bearer bases.

After that we tried to play my WotR rules on Phil's Northampton board. As I indicated earlier it was not good.

But that's the value of play testing before you go public with something.
Posted by Trebian at 18:47