More on my Andean Journey 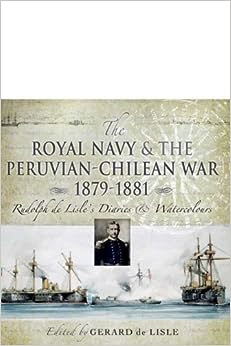 As I said in my report on Campaign I picked up a contemporary account of some of the Peruvian/Chilean conflict. This was written by Rudolf de Lisle,a Royal Naval officer on HMS Shannon, who kept a diary and illustrated it with watercolours. It was re-printed by Pen & Sword books in 2008 and I got my copy from Dave Lanchester*.

The book has a historical introduction which is okay, and suffers from some idiosyncratic foot-noting, but otherwise it’s a gem. The chap who wrote it was a talented water-colourist. He’s clearly an amateur but he’s a military educated amateur so he knows what he is painting when he’s doing the military stuff. He served on land from time-to-time, which ultimately cost him his life at Abu Klea**.

Most of the military illustrations are of naval combat between the Peruvian and Chilean ironclads. He saw most if not all of the ships concerned, although I don’t know that he actually saw them in ship-to-ship action. If you want to model the ships the pictures are excellent.

There are some pictures of the land based forces, including of the fortifications built round Miraflores all of which are useful. Even more useful for me, already having the Caliver book on the uniforms, are the illustrations of the terrain, showing the colours, types of buildings and so on. One of the pictures at least is of a place I have visited that is now completely built over.

The diary text is of variable usage but all interesting as to what was important to a Naval office in the last quarter of the 19th century. Playing cricket against other ships and the locals features highly.
It’s a lovely book and thoroughly recommended to anyone with an interest in that period and not just in that part of the world. After all many of the ironclads that fought were built in Britain and most of ours never saw any action.

Don't take my word for this being an excellent book; Bob Cordery over at Wargames Miscellany got there first about 4 years ago, before I'd even heard of the conflict, let alone the book - Link

I have also managed to finish my first unit of Peruvian cavalry. These are the “Caballeros de Rimac”. They were so named because the unit was fitted out from the contents of a captured Chilean troopship called the Rimac.

In practice it doesn’t matter what I call them. The Peruvian army mostly equipped its cavalry in a uniform manner so they can pass for anything. They also shared similarities in uniform colours with the Chileans, so keeping them apart will be a challenge (the Bolivians had a different uniform colour for each regiment, pretty much, so no issues there).

The figures are crisp and well detailed and proportioned. The horses are slightly smaller than usual which is correct. The horses in the campaign were noted for being small (and it must be admitted also sometimes completely absent). The detail on the firearms is very good too.

If I was to have a criticism it would be that the arm out to the side with a sword is a really awkward pose to get on a base without the sword sticking into a colleague. If I’d known I’d have asked not to have had any of those poses in my order. What I may do for some of them is substitute a lance for the sword to reduce the footprint of the figure.

My next batch on the painting desk includes some more infantry and some artillery. It’s slow progress, but I’ll get there.

Now, off to think about how I make some South American buildings…


* Whenever possible you should always get your books from Dave ‘cos he’s a nice bloke who looks after wargamers.
** He is clearly going to be a character in my next SvP game.