Over the five or more years I’ve been doing this blog I have had occasion to remark on how much I like Campaign at Milton Keynes. It isn’t the biggest show but it wins because of its location, depending on what you think wargaming shows are for.

Mostly we know they are for taking part in competitions, off loading stuff at the Bring and Buy and then spending too much at the trade stands. Personally I like the idea that they are about explaining the hobby to the public and enticing in newcomers. Campaign wins on the latter score every time as it is free to come in and it takes place in what our American friends would call a shopping mall. Yup, - it is set slap bang in front of John Lewis and Next in the Central MK shopping area. 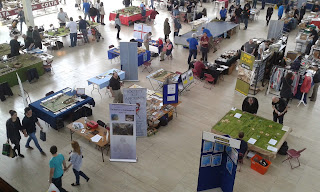 I’ve not been for the last two years. Two years back it clashed with CoW, and last year it didn’t happen as Centre Management had decided it was inappropriate. This year it was back in its more regular slot. I went along with Phil to help him run the combined Society of Ancients/Northampton Battlefield society / Naseby Battlefield trust stand. Phil took along his lovely Northampton and Naseby 15mm battlefields and I wrote a quick game to be played on the Northampton one.

I had been struggling to make Rapid Raphia work for the battle and failed dismally last time I tried it out (an as yet unblogged game). I was on the point of giving up on the design when a series of ideas all clicked together and I ended up with a 20 minute game where the players can actually make decisions, is reasonably tense but also steps through most of the known events that occurred during the battle. It’s not necessarily a game you’d want to play more than once or twice, but it delivered what I wanted.

I ran the game three times over the weekend, - not very often, I’ll admit. Mostly this was because a lot of the passing traffic were people from Northampton on a shopping expedition who wanted to know more about their local heritage. I think I should have been bolder about getting people to sit down and play, but I didn’t want to scare people off. We need local support to preserve the battlefield and that needs to be explained clearly and carefully.

Of the three games we got some good results. The first game ended up as a Lancastrian win, despite Grey changing sides as an initiative to reach a negotiated settlement brought the battle to an end with no Lords being executed and a shared council being created. The second game was an out and out Yorkist win with Lord Grey changing sides at the critical point. The final game went the same way (and was the only game where I didn’t play the Lancastrians, - Will & Phil faced off) but both Fauconberg and Warwick were killed in the fighting. 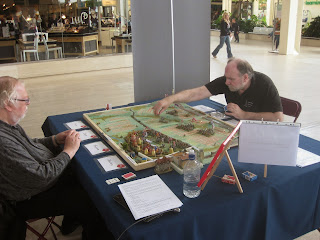 Elsewhere the participation games were a bit hit and miss.

The centre piece was the Dambusters Game which won an award at Salute this year. 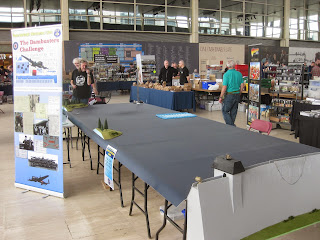 Love this,  - not just for the way it looks, but for the design which was clever but playable and didn’t just require the player to roll a d6 several times. 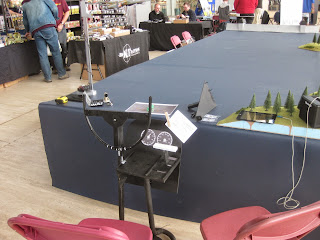 You even get a proper pilot's control and the wooden device for lining up with the flak towers we all remember from the film. 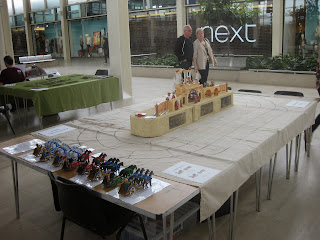 and a Lego Star Wars battle was also featured. 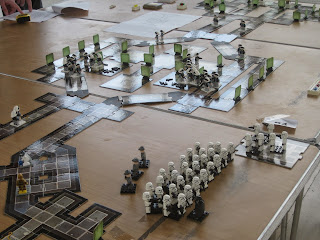 The Staines club had an imaginative take on Agincourt in its 600th year, but alas they were only there one day and I didn’t realise it so I was too late to take pictures.

Elsewhere there was a good mixture of historical and sci-fi / sci-fan games and board games. The club most local to me were running the classic Gladiator Rules from Paragon Wargames (originally advertised as the game you could put in a biscuit tin). 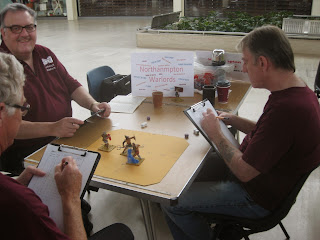 The only thing I would say is that much as I am a fan of MDF buildings (and I am) they do need to be painted before you put them on a table. Otherwise they just look like MDF. At least stain the wood with something so roofs and walls are a different colour.

On the trade stand side of things I picked up a couple of books (including a set of watercolours painted during the 1879-81 period of The Pacific War). However it was generally a bit thin on the ground. I wanted to pick up some basic supplies and no one had what I wanted. I’m hoping this is only because of the break in continuity last year and that with the show back in the calendar things will be stronger next year.

Finally, my best memory of the weekend was the man in a wheel chair who said “I didn’t realise this was a thing you could do” and went off to join the local club and buy some soldiers to paint. Brilliant. I hope they make him welcome.
Posted by Trebian at 20:35