Having finished the work I needed to do for one of my CoW games I was in need of a playtest. There were some tweaks to the rules required and I wasn’t completely happy with them, so I needed a willing opponent.

What with all the commuting and other stuff going on it has been difficult to squeeze a game in of an evening. Luckily as the project I’m on ramps up its numbers at the same time as the company is selling off real estate the requirement to work from home has become a necessity about one day a week. That means I can finish work later than normal and still get home an hour or so early, freeing up time for a game.

Phil agreed to come over and help out, although I had a suspicion that the “Rapid….”  ruleset does not hit his sweet spot for games.

The game is the Hydaspes refight I referred to in my last post. Phil took the Indians, and I got Alexander. My feelings were that Alex would be up against it to manufacture a win, as the central block of elephants is quite formidable.

As it turned out I wasn’t quite right. However, I think that was mainly down to me not explaining the rules fully, and then rolling out tactics that I knew would work.

I should also say that Phil hasn’t played the system that much (he thinks “at all”) and it is certainly a game where knowing the rules is key. The skill in the game is in managing your cards and deploying them at key points. There are very few places you can create an absolute advantage, and you have to throw everything in to them. There are also times when you have a complete lost cause, and trying to defend it is just a waste of resources. What this means is that if you know how it works you have a huge advantage that no amount of tactical skill will offset. 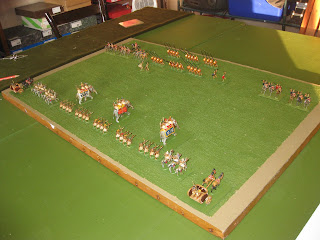 It’s a bit like playing Martin Wallace at one of his games for the first time. He has no qualms about kicking you around the park if he can.

The game was a little formulaic. I went for a big right hook lead by Alexander, and mostly got away with it. I won two out of three combats, but that left Phil with a cavalry unit on the inner flank that would prove to be a nuisance. 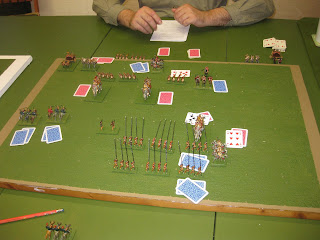 Phil tried to free up his archers, whilst smashing off the right hand end of my phalanx. The archers aren’t that effective. Partly it is hard to use them as they are masked, which is historical. Also the rules for using them effectively are not completely intuitive. A single unit on its own isn’t that great, but you can make headway if you use them in groups, or if you combine them with a hand to hand attack. The bald mechanisms as written don’t make this completely clear. However, I will admit that I am a bit harsh in this area, and a re-write has been done.

As Alex had won on my right flank I was able to turn on the line of archers and start to roll them up. You can see them causing havoc quite clearly. 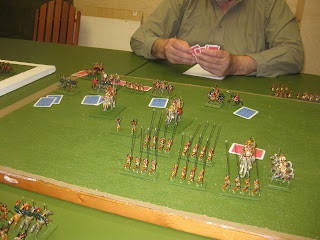 Phil made decent inroads into my phalanx, but I was well ahead on damage done. I'd finally decided to push my left flank up, as Phil advanced his remaining elephants. We're getting into the final phases of the game here, and card management is becoming absolutely key. 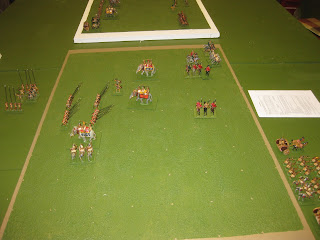 This is where it ended. I've wiped out the infantry, and done in both flanks mostly. The game is over as we've both run out of cards. The dead piles give the victory to Alexander.

I got a few rule changes out of the game, but otherwise I'm good to go to CoW with it. I need to do a really good QRS and work on how I explain the game so that players are in with a chance of playing the game how I want it to be played.

I am toying with the idea of allowing the players one recycling of their deck so that they are able to get more units involved. In most games of the system so far half of the armies sit there as punching bags.

It certainly works well as a game, but I'm not so sure it is a great wargame. Maybe my WD friends will let me know if a few weeks time if they agree with me.