Getting ready for CoW.

WDs Conference of Wargamers is less than a month away now. Where has the year gone?

This year I'm putting on a couple of sessions,  both of which are based on things I've done before.
The first is a development of the "Rapid Raphia" game from last year. As the title seemed to work I'm offering "Hurried Hydaspes". As I have remarked before I know the battle now and I have the figures.

Last year I did it all in a bit of a hurry so the game was played on a sheet of card divided into squares. With a bit more time this year I have done one proper board and have another one under construction. 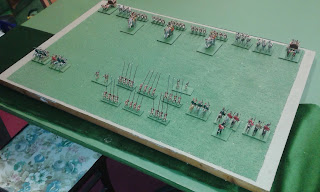 This shows the expected set up. The board is divided into squares using discrete brown dots, so hopefully preserving the look of a wargame over a board game. This board is built on the back of a pinboard one of my regular opponents kindly donated to put up in Shedquarters. I never really had the wall space or the need for it, so it serves a good purpose here. 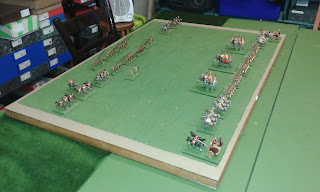 Unlike "Rapid Raphia" the armies for this one are not even in terms of units. Furthermore the Indians don't get a general figure. This is partly because there isn't enough room in the squares for a unit AND my Porus figure (he's in a chariot) but mainly because he doesn't seem to have done much in the battle.

The rules have been re-written and gone off for blind playtesting. There's been a few changes. "Rapid Raphia" is essentially a battle between two evenly matched sides using the same weapons systems. "Hurried Hydaspes" is a bit more asymmetric. The heavy cavalry on opposite sides isn't really comparable, and neither is the heavy infantry. It'll be a good test for the original concept.

Post Script: The other board was left to dry in Shedquarters today and it has been a bit warm. Consequently it has warped a bit. Curses. Need to attach a frame to the back to pull it back into shape. What a nuisance.
Posted by Trebian at 20:47