Sir Padraig of Norfolk agreed to try out "Hurried Hydaspes" with one of his local opponents. He was good enough to photograph the game nearly turn by turn and send me comments. This is how it went.

After we'd had to speak on the phone so I could explain a few things of course.

Sir Padraig was the Indians. Esquire Hoops the Macedonians.

Now I don't have captions for all of these pictures and I didn't see the game so this account is even more incoherent that usual. 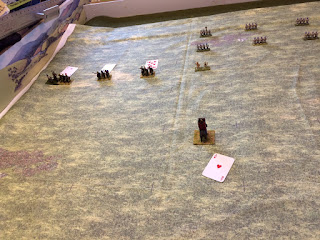 This is a view of Alexander's wing. He's out there on the extreme left of the picture. The Indian left flank cavalry are being held back, out of shot at the bottom of the picture.  Sir P is being devious, surrendering the initiative to give himself a card advantage at the end of the game. 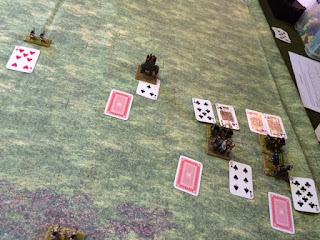 Lots of resources being thrown in on this flank to get a Macedonian breakthrough. Looks like a dead chariot to me on the right, although later pictures indicate this isn't the case. Wonder what happened? 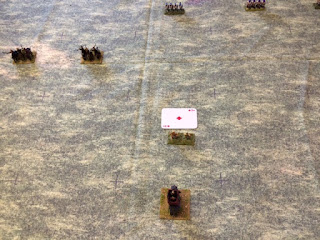 Nothing much going on over on the other wing. Those light infantry are keeping that elephant in check. 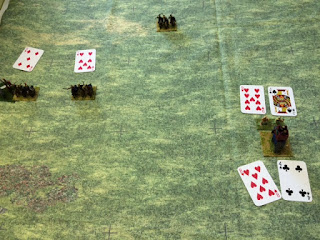 That looks like a dead elephant in this picture as the light infantry get stuck in. 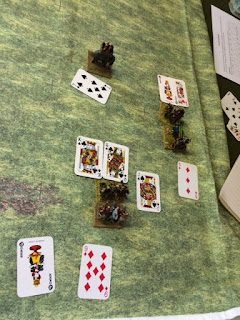 Right. That certainly should be a dead chariot, even with the elephant joining in. The Indian cavalry are certainly gone. 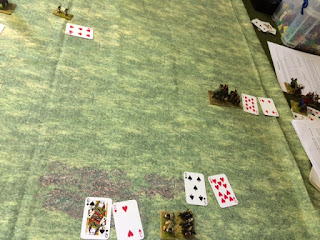 Macedonian cavalry sweeping along the battle line at the bottom. Can't work out who is doing what to who on the right hand edge. 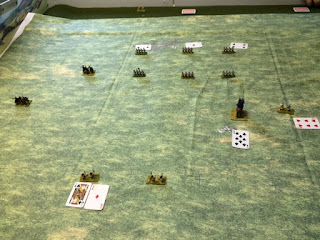 I have a note that goes with this picture. It says "3 Indian Units gone, 1 Greek unit gone" (sic) 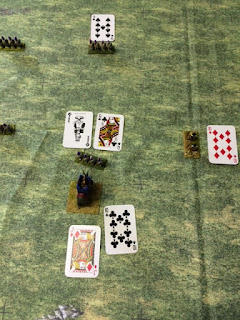 Those pikes have got it sorted against that elephant. Bonuses for two black cards, plus a support card from the rear rank. 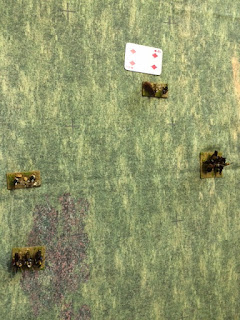 This picture is the wrong way round, but I can't rotate it. The caption reads: "Archers killed two cavalry cards with archery. But 2 for 2 stand off no movement no deaths. " It refers to the two units on the left. The archers have held off the Macedonian cavalry with some steady shooting. 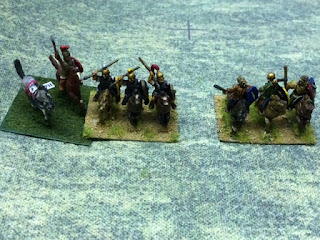 Alexander stayed out of action the whole game. Curious. 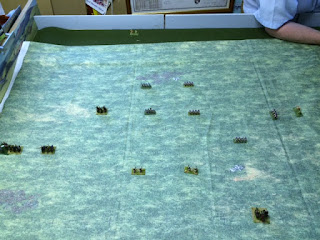 
"We ended early as I lost 7 units but missed the card turn. As you can see I had a very strong backhand (I have a picture of the remaining cards, but it's a bit dull for a blog). Alexander still not involved and Hoops pointed out that the next turn was definitely his last.

I had been successful losing the initiative to burn his deck and holding back to force him to burn cards.

We really enjoyed it. Thanks."

Looks like it was a close game, and it is good to get some positive feedback from people enjoying the game.

I have a few items to sort out and write up, but a reassuring playtest before CoW.