Is it that tine of the year again? Well, a week later than normal to avoid Silverstone, but yes, it is early July so it is off to Knuston Hall for the annual wargames event of the year, WD's CoW.

The weather is wonderful and old friends have arrived in force so an excellent weekend is in prospect.


For the first time pretty much ever I missed the plenary game as I was catching up with some fellow attendees enjoying the evening sunshine. However soon it was time for my first game of the weekend, a historical based role playing game run by Tom Mouat, following the escapades of famous female flyer Jean Batten, who has gone missing in the Pacific Ocean. 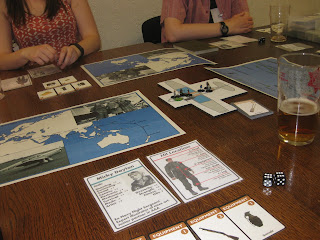 We were a team of 8 in an ex-military Catalina, now re-purposed by ex-Navy buddies into a private airline. There were a crew of three, accompanied by Jean's very rich fiance, his bodyguard, a professional photographer and the Dunlops, a couple consisting of another famous female flyer and her husband. Never did work out what he was for. i was the most junior member of the team that owned the aircraft, and my specialist skill was painting the nose art on planes.

Well, some one has to do it.

We set off from Auckland New Zealand, and flew back along the flight path Jean would have followed,and chanced upon an Atoll with a landing strip, slightly off the beaten track. Seeing a village we took the old bird down and landed in the lagoon. 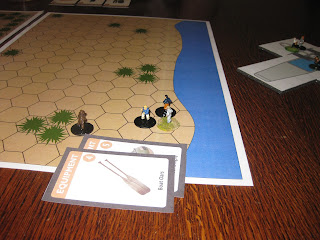 Luckily we'd remembered to pack a rubber dinghy, so we were able to send a shore a search party without risking the plane. We encountered the local natives, who were into a full-on cargo cult, complete with mock US Marine sections who did drill.Unable to establish if they'd seen Jean's plane land we took off again, and espied a runway, built on the atoll. An eagle eyed observer from the Catalina spotted fresh plane wheel ruts on the runway, so we landed and sent another party on shore for a look. 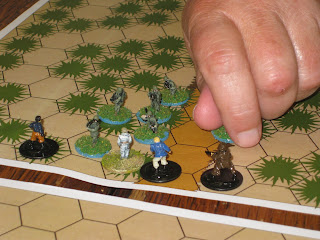 They shore party searched the surrounding jungle and found the wreck of Jean's plane, and also the distinctive footprints of those split-toed Japanese military sandals......oo-ohh...it's 1946, could there possibly by a section on the island who haven't heard about the end of the war?

The shore team followed the tracks into the jungle, whilst keeping in contact by walkie-talkie. The team in the Catalina kept the engines turning over. 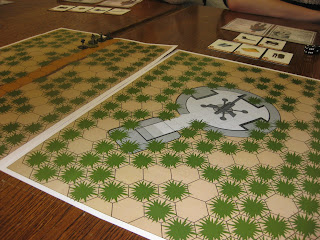 The shore party explored the abandoned airfield buildings and defenses that were clearly being used by the Japanese. In the process they nearly lost a team member to a booby trap and generally made a hash of things. Meanwhile......

Out in the lagoon a boat was being hastily paddled towards us full of Japanese soldiers, with the officer holding a gun to the lovely Jean's head. Clearly they were threatening to kill her if we didn't hand over the plane. There was only one thing for it, - put the plane up to full throttle and run them down.

The boat was destroyed and the party thrown into the water with the officer encountering one of the prop blades in bloody fashion. I hung out of the hatch with a rescue rope in intrepid fashion and we whisked the glamourous flyer up into the air.

All it took then was for us to reseue the rest of the party and we were off home, mission accomplished.Who would Jean fall for now, her loaded banker boyfriend or the heroic lantern jawed all-American guy who plucked her from shark infested waters?