Awakening to a glorious Northamptonshire morning with sun streaming through the window what could be better than a day's wargaming? 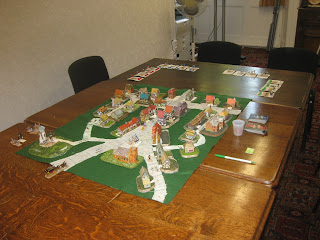 First game of the day for me was Sue Lafflin-Barker's smuggling game "Gentlemen Go By". This has been back and forth to CoW over a number of years, but I'd never played it, so I signed up for the latest iteration. Its return this year included some minor changes we were told, but mostly I think it might have been because Sue has just published the rules for this and a couple of other games in a small book 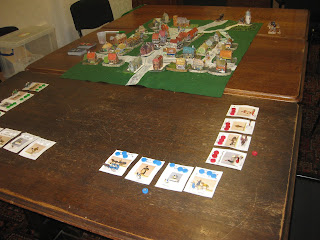 The set up is attractive, with a pretty Kent village made of cardboard buildings where its citizens go about their daily business, turning a blind eye to the dark underbelly of their community.

I got cast as the "Revenoo men", and three others turned up to play the more or less honest inn-keepers and smuggling band leaders. They have to make deliveries round the town of a mixture of legal and illicit goods. I have to catch them red-handed. 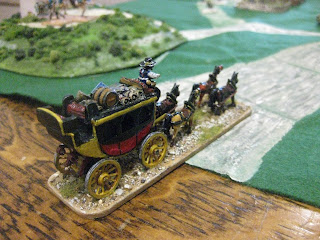 This is a stage coach built for Sue by Phil Steele. At this point in the narrative the picture is just gratuitous eye-candy. 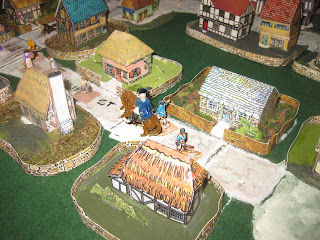 The game commenced and I sent my brave boys off patrolling, looking for those subversive elements who were undermining our Nation's attempts to defeat the evil French. 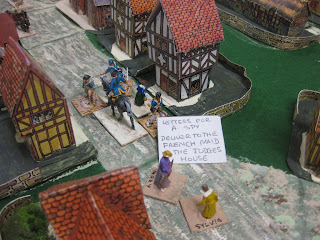 I struck lucky early on. Sue was quite exasperated, and lectured the smugglers on the need to co-operate. It did sound at times like a much loved tutor telling you your essay wasn't quite up to the standard she would expect from one of her students.

I wanted to make an example of this particular smuggler, - I mean Letters for a SPY!!! - but my attempt either to have her shot and dumped in a ditch or hung up on a gibbet were over-ruled, and I was told I just had to drag her back to our base at the windmill.

Alas my team were surrounded by villagers and "Betty" was freed. I redoubled my efforts and searched everyone I could. I realised at this point that it would have been a good idea to have kept a list of who had been searched, as once they have been "cleared" the system doesn't allow for them to be re-supplied with illegal goods.

A brief note here on the way the game works. It is driven by PiPs which you roll each turn to move both your own chaps and also any villagers you're next to. This has its usual frustrations as not enough PiPs means that you can't always do what looks like a sensible thing. Luckily the moves turn over quickly so it isn't that big a deal for your involvement if you roll a 1 for your PiPs. Alas a double 6 is useless, however, as that just brings the stage coach to town rather than let you move everything to everywhere.

I'm not convinced that this is the best way of dealing with command and control (!) in a skirmish game, but who am I to argue? 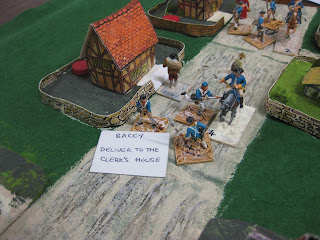 I did succeed in intercepting another parcel, and when the game had to finish I was dragging the miscreant away, and was driving back the local mob quite successfully, so a good outcome for me.