Following the smuggling game I had to chivvy Sue out sharp so I could set up for "Hurried Hydaspes".

After an initial slow sign-up (people waiting to see what else is on, I suspect) I was lucky enough to get a full house of four players (see, - "Full House" for a card game...oh, please your self) 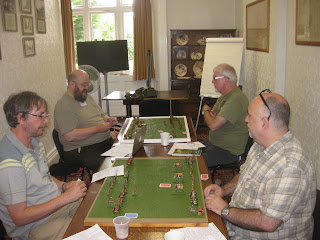 In the far game we have John Salt on the left, and Ian Lowell on the right, ex of the MNG. Near the camera we have Colin Maby on the left and Rob Cooper on the right.

John admitted that ancients wasn't his thing and Rob remarked that he didn't really do figure games. Perfect mix of participants.

The rules were explained, mostly clearly, and then I let the players get on with it, having provided rules and a QRS to everyone.

There aren't a lot of pictures of the games being played as I was dodging backwards and forwards offering helpful tips. Both the games were close and both played out differently.


In the JS/IL game the main fight developed out on Ian's right, where Alexander was. Alex got himself caught between a couple of Indian units, and there was a constant stream of court cards cancelling each other out. Eventually Alex succumbed, and died. The subsequent army morale check saw his forces retire to Macedonia.

In the other match Rob went for the high intensity approach with the Indians, attacking vigorously where ever he could, and giving himself card deck management issues. Eventually he ran out of cards and his army broke, making it one win each to the Macedonians and Indians.

In the remaining half an hour Nigel & Nick (in the background) kicked off another game and got close to a result.

All the players seemed to enjoy themselves and claimed to like the system. I discussed a number of options for rule changes with them, with the consequence that I will add a rule change allowing the player who wins the initiative to advance their whole army one square before any cards are played, if desired.

With that it was time to tidy away and have some lunch.