Saturday Evening gave me the chance to play in a John Bassett committee game. These are usually jolly good, with lots of Machiavellian politics and cut and thrust.

This on was "East is East", a game about the sepoy rising in Singapore in 1915 (yeah, I didn't know anything about it either). John professed to being torn between two roles to give me, and I ended up with the Police Chief. I think the alternative was the Governor, but more of that later. 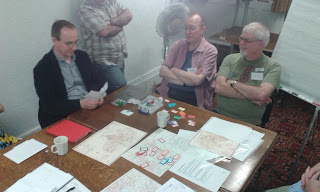 The game consists of a few maps and counters to look at and a load of personal briefings. We then all sit round the table and try to solve the problem with limited access to intelligence. Players receive info from JB as the umpire and can tell him what else they're going to do.

Reading between the lines of my briefing I could see that I had genuine concerns about subversive elements. What's more I was an ex-Highlander officer. An excellent opportunity for some role-playing.

It quickly became clear we needed more than just my 200 Sikh policemen to regain control. Men with guns were going to be required. However, the confusion and chaos enabled me to act upon all the dubious information I had been storing up during my career. Any one remotely subversive (those Ditch, - they sound GERMAN!) was arrested and put into the jails or held at the Cricket Ground in a concentration camp (well , it worked okay in the Boer War, except for the sanitation). With the jails not completely full I was in position to show how zealous I was by instructing the umpire to round up the usual suspects.

Alas I did misread my briefing and instruct the Special Branch to burn down the empty Turkish Consulate in an attempt to flush out more spies. My vigorous actions gained the support of the rest of the committee, except perhaps the Navy, when a few Marines got arrested.

Alas the Governor had lost control of the committee and the situation and lashed out in all directions, finally ordering my dismissal and handing over control to the military. I'm pleased to say that my loyal Sikhs backed me to the end and withdrew to their barracks, and in the eventual court of enquiry I was completely exonerated, backed by all my colleagues except the Governor.

We suppressed the mutiny, arrested all the local spies and restored order. Not a bad result.

All in all a lot of fun, if a little bit chaotic.