Sunday was a bit of a mixed bag of things, as it always seems to be.

It can be played face to face, but is best if played in different rooms with umpires running between them. 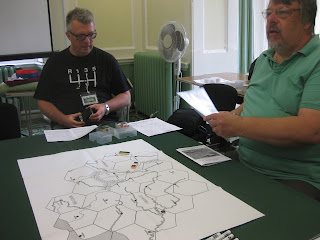 Bob explained the game to us and mentioned he had made a few amendments, - chiefly an additional hex with Calais on it. So, well briefed I went off with my fellow Germans to plan our attacks. 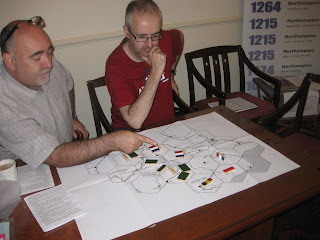 I was in a team with Rob C and Chris A, which struck me as a powerful grouping. However, the Allies were equally well provided for, and contrary to the recommended practice were allowed to be in the same room together and co-operate.

We went for a knock out blow towards Antwerp and a strong thrust towards Le Cateau. We completely refused our left and in fact hurried resources to the North as quickly as we could.

We hammered at this area for about half the game with little apparent success, much to our surprise (a subsequent check on the original rules indicated that Bob had altered them slightly to make it harder for the Germans. The French are ordinarily required to go on an all out assault straight forward but otherwise not move in turn 1, which would have enabled us to take Le Cateau on turn 2).

Having sucked the French reserves North we eventually punched a hole through the centre round Sedan. 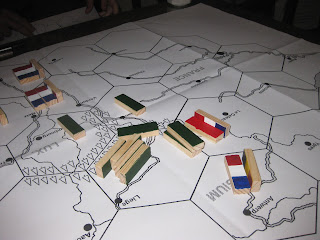 We seemed poised to take Paris, but were thrown back in disarray. The French & their Allies can refresh more units in the latter half of the game, so if the Germans don't get forward early on they can't make progress later in the game. The play sequence also allows the Allies to attack first (why???) which worked to our disadvantage here. If we had moved first, our lead unit would have been one hex closer to Paris, with the rest of the Army streaming in behind it. BTW In the picture above "spent" armies are represented by the blocks being turned on their sides.

This turn was our high water mark. 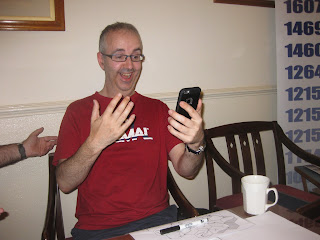 At this point my smart phone "beeped" and I discovered that one of my team mates had posted a picture of our map positions on the WD Facebook page. He took it down quickly. This is his "How stupid am I " look.

As the game was so in the balance Bob ran an extra turn (ie we played 7, not 6 as intended by the designer) but no one made a significant breakthrough. In fact the German forces were badly spent and the extra turn could only lead to an Allied breakthrough if they got it right. Which they didn't. Probably didn't realised how worn out our armies were.

In the post game de-brief it was clear that we had come close, but in the end fell short of the historical German position. So a marginal Allied victory.

The game is simple and works very well. Playing a game in multiple rooms with umpires is always a joy if it is done well as it was on this occasion.

And I know it is sour grapes, but without those rule tweaks/omissions we'd have been in Paris before the leaves fell.

The second morning session was a discussion on the history of card decks and how different countries have different decks with different colours (not just red and black). This was lead by Ian Lowell, with the aim, I think, of encouraging people to use more culturally appropriate decks of cards in games when needed. A couple of ideas for uses of Spanish decks and also German Skat decks came to mind, - the latter for a WW1 game where the Allies get a "normal" deck, and the Germans a Skat deck.

Post lunch John Curry gave a short talk on Paddy's career and how wargaming had affected it. John is Paddy's wargaming literary executor, so to speak, as no academic institution wanted those papers. Paddy kept all his correspondence, stapled together with notations, apparently. This is a bit unnerving in a way, as there'll be letters from me, written when I was in my teens and early 20s somewhere in there.

One thing I did learn is that he came close to getting a teaching job at my old University, just before I went up. Can you imagine that? Being taught by Paddy, and then wargaming with him at the Uni wargames club!!! Oh well, it was not to be.

And then it was time for the AGM and good byes, until next year.

Only 12 months to go to CoW 2016. Better start working on my sessions.