Several years ago I inherited my son's Canon EOS 350D. It had a sticky shutter release and when he traded up I took it over and had it repaired. It has done me good service not only with my toy soldiers but also in my trips round the world with Mrs T.

Alas the shutter release has become sticky again, so I went into the local camera shop to have it looked at. Same problem, same price. Is it worth having it done every three years?

The shop (Skears Cameras up the Welly Road in Northampton) is a terrific little shop, doing its best to compete with the internet. Having premises slightly out of the town centre helps. Plus they're very helpful and they will price match and so on. And they sell second hand cameras.

Sitting in the window was a brand new looking camera body for a Canon EOS 550D for about £200. This is the camera my son had traded up to. A quick check on my smart phone revealed it was out of production but still very well regarded. A quick text to Master T confirmed he was still in love with his camera, so I took the plunge. Well, birthday is only a couple of months away, and they gave me a trade in for my previous model as well.

When I got it home it was like it had never been used. The box was in perfect nick and all the accessories were in there, some still in their packets. It even had a spare battery. The strap had a slight, - very slight - discolouration - but that was all. The original receipt indicated it was 4 years old, but you'd never know.

And this model takes SD cards rather than flash memory, so much easier to upload photos.

Is it any good at taking pictures?

Bit early to say yet, but here are some pictures of some recently completed Chilean infantry:

This lot are a National Guard unit of the second campaign. They are distinguished by having  grey trousers. I've painted the kepis without the normal covers to give them a splash of colour. 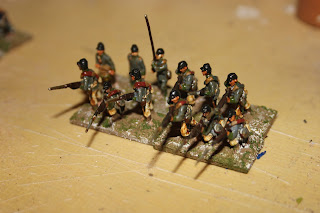 The Cazadores del Desierto from the second campaign, who wore grey uniform jackets and white trousers. 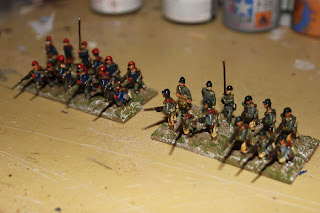 Both units side by side.

The main problem with these pictures is the light, because they were taken on my painting desk, just using the flash. I'm also getting used to using an SLR with a decent sized LCD screen, rather than using the view finder. Not sure which is best.