Weekday evening games have been a bit of an endangered species over the last 6 - 9 months. However as the project I'm on ramps up (and as my employer sells buildings and moves more people into fewer spaces) there's an increasing requirement for occasional working from home. That means I can get home from work in time to fit a game in.

This Wednesday was one such day. Hopefully the first of many between now and the end of the year when my contract is up. A quick email exchange indicated there were three Monday Nighters available so I just needed to sort out a game. After kicking a few ideas around I thought it would be interesting to go back to the Russian Civil War and see how Op14 will work for it. I spent part of the weekend rooting through my books to try and find a suitable scenario and in the end gave up and just put on the table what I wanted to see. I think lots of cavalry and sweeping movements are the order of the day if it can be achieved.

The game is suggestive of the White drive towards Moscow by Deniken's army of the south. They got two infantry corps and two cavalry corps. The Reds have three large infantry divisions and the possibility of reinforcements in the shape of a cavalry army. 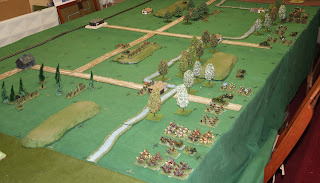 The Whites are on the right of the picture, formed up to cross the river. Infantry & cavalry units can cross the river with relative ease but artillery and vehicles have to cross at one of the towns/villages. The management of the traffic jam round the crossing points would be a major problem for the Whites.

I'd set it up for two White players and one Red. I was expecting players to arrive at different times so I was going to take the Reds at first because they'll be fairly static initially. The White commanders I was happy to have kick off at different times so they'd add the second corps attack when a player arrived and I'd hand the Reds over when it got exciting and the cavalry arrived. 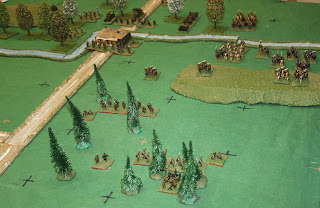 Chris K arrived first and took the left flank of the White army. He lined his artillery up to blast away at the brigade/regiment defending the river crossing, whilst sending the cavalry across to try and turn the flank and capture the railway station, cutting the line. 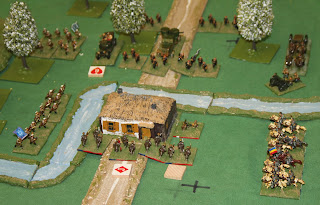 Chris soon had his troops in position for the attack but held them back until he felt he had effectively suppressed the defences with his guns. The face down chit indicates an artillery hit. It will be flipped to reveal the effect when the attack goes in. That isolated brigade is looking a bit exposed. As the shells started to fall I considered dropping them back to get them under command, but then thought again about what the Cheka would think about that and left them there. 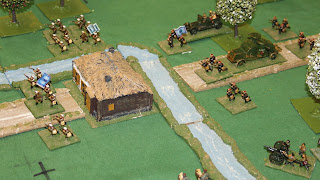 As it turned out a couple more turns of artillery firing preceded the assault and when it came in the pile of potential hits turned out to be all hits, so the attack was a walk over. Of course in Op14 it wasn't without consequences, with a couple of White battalions being rendered hors de combat for the rest of the day.

On the positive side for the Reds this had all taken quite a long while. We were now at midday in game time and the Whites were still effectively on the river line. Their right wing had stalled completely due to the absence of their commander. 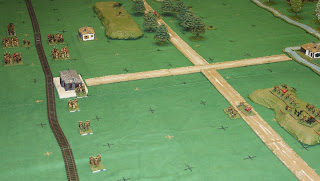 Whilst the assault on the town was being worked through Chris succeeded in infiltrating his cavalry corps round the outside of my position in very open order. It looked like he'd be able to get to the station and capture it, but...what's that in the distance? Could it be some proletarians on horse?

By this point we'd played about a couple of hours with no sign of our other two players. It turns out they were both held up unavoidably so part of the scenario didn't fire as well as it could have done and we stopped.

I've left the table set up as we can pick the game up in the future if there is any appetite from the players. Either that or I can solo through a few turns over the bank holiday weekend. Having put all the toys out it would be a shame not to get some value out of them.

There are some bits of Op14 I need to look at and I need to revisit the orbats for both sides for future games. The basic unit size is 4 brigades, - anything between 4,000 and 8,000 men - and RCW armies are not necessarily that big, so a bit of downsizing might be on the cards.