Who'd a thought it?

I see Warlord Games have announced a range of Doctor Who(TM) figures and a set of rules to go with them.

This isn't the first range and set of rules to be produced. Harlequin Miniatures produced a range at the back end of the 90's (ie before the Russell T Davies renaissance). Now, I'm a bit of a Whovian so as a wargamer I suppose I should have been in the target audience.

Even so  I missed the range when it first came out and didn't really pay much attention when I did hear. Then I saw some of the figures and realised that they were really good. I mean really, really good. So when the figures came down slightly in price and the company did some bulk discount orders I was in.

I painted the figures back when I could do fine detail and had the time and patience to do shading and so on. They're what we would call 28mm now, but I don't know that a scale was ever published. The character figures (several Doctors & assistants, Weng Chiang, Mr Syn, Bok, the Master plus others) I painted to display standard and they're in a cabinet in the dining room. The others were painted and varnished to use as figures in a game, but they still came up okay.

The figures actually looked like the people they were supposed to be and were well proportioned. The UNIT troopers are well built, but then they're professional soldiers. However they are slim and weedy next to GW muscle men. Yeah. They look like people. See it is possible. 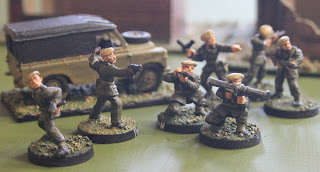 Here's a small squad of UNIT troopers, with the Brigadier in the centre (I have another Brigadier in the famous sweater and cap but he's in the display cabinet) and the UNIT Land Rover in the background (plucked from a remainder bin in Forbidden Planet, Birmingham). 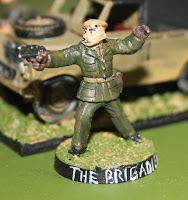 This Brigadier figure suffers a little bit from where the face fitted in the mold, but it's a nice pose and he has a nicely chunky Browning automatic.

I painted him with brown leather gloves, because he always seems to have dressed that way.

One of my favourite characters. 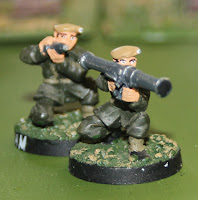 The bazooka team came out okay too. I'm not sure the loading pose is entirely correct, but who is arguing when faced with Daleks? It's funny how variable the effect of these weapons is against Dalekanium.

These came from a UNIT heavy weapons pack, which included a mortar and a Bren gun team.

The bad guys were very well realised as well. Here's some Ice Warriors with an Ice Lord on the right. Another personal favourite, and sadly not a fixture of the latest series, especially as they are from Mars.

The Yeti were robots, of course, controlled by the Great Consciousness (reprised by Richard E Grant in a recent series, sans Yeti alas). Deeply scary as they inhabited the Tube in one story. 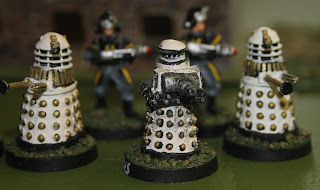 Of course no collection would be complete without some Daleks. Here are a couple of standard Daleks flanking a demolition Dalek, from the Sylvester McCoy story "Remembrance of the Daleks".

This was a much under rated episode, which featured the first levitating Dalek on screen. Well worth revisting. In the background are a couple of Dalek troopers from the Peter Davison episode "Resurrection of the Daleks".

Finally here's unit battling it out with some Ice Warriors. The game -  "Invasion Earth" -  came with some cardboard buildings, which you can see in the background. The telephone box was obtained for me by Phil. Can't remember who it is by.

Okay. An excuse to get the new camera out. Fair cop.
Posted by Trebian at 20:33

Email ThisBlogThis!Share to TwitterShare to FacebookShare to Pinterest
Labels: Doctor Who, Harlequin Miniatures