I've done most of the Chileans for my 1879 Pacific War project. Well, most of the first batch anyway. A gun or two need doing and there's some more cavalry to be done, but I've got enough for a Neil Thomas style army.

So, a quick set up in Shedquarters and a few photographs were in order. 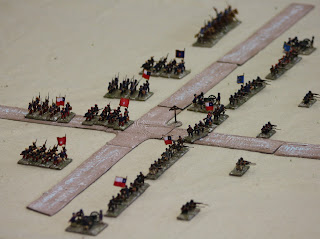 Here's most of them together. Lighting's a bit off (I'd turned the flash off by mistake). The units are each four bases, and I'm thinking of setting them up with three in line and one as skirmishers when the unit is deployed. 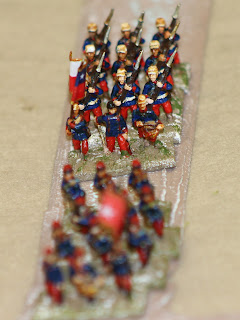 The units are painted for the first/second campaigns and so are mostly in blue jackets & red trousers. Some I've done with white cap covers and some in the basic red. 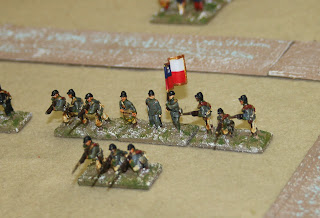 The unit in grey are the Cazadores del Desierto, who were a National Guard unit and were nick-named the Foreign Legion. 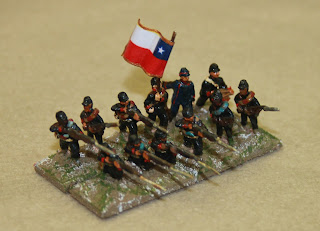 These are the National Guard Battalion "Atacam" No 1. They were unique for being dressed in black uniforms The flag is the national flag of Chile, as I don't have detailed information on the standards by unit. BTW the flag staff is too thin and fragile for a wargames figure. I wish now I had drilled it out and replaced it with stiffer wire. 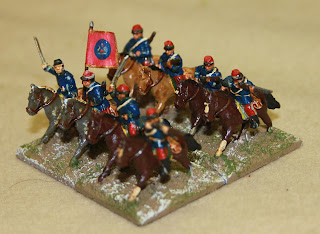 These are generic cavalry. The sources I have are a bit mixed up on what unit was at what battle, so I've kept them to the basic uniform. The flag is based on the standard for the Carabineros de Maipu.

The army is shaping up nicely, and I'm far enough advanced to think about ordering some Bolivians.

Now they come with some really varied coloured uniforms.
Posted by Trebian at 20:28