Where have all the caballeros gone?

My lack of recent postings means that I’m about due to catch you all up with what’s going on generally. Work commitments and the consequent need to split my time between London & Manchester when I don’t live near either of them is seriously interfering with my wargaming. I’m making slow but steady progress on the painting side, however, so it isn’t all doom and gloom. My first purchase order of Chileans is nearly done, and the Peruvians aren’t looking too bad either. So much so that I’m working on getting an order of Bolivians in shortly.

If you’ve been round long enough to remember this blog (How to finish a wargames project) you will know that I have quite a strict approach to getting stuff done, which is mainly only doing one thing at a time and then moving on to another project, without buying anything in the interim.

Sometimes this planning technique comes apart. Most recently (well, about a year ago) Jim donated a quantity of figures from the Hat El-Cid range to the Trebian Benevolent Fund, from which I was able to put together armies in accordance with the DBA 3.0 army lists. My intention was always to upgrade this to make AMW and probably Armati armies as well. This project has been towards the back of the burner. I have added a few extra elements here and there but not made significant progress. 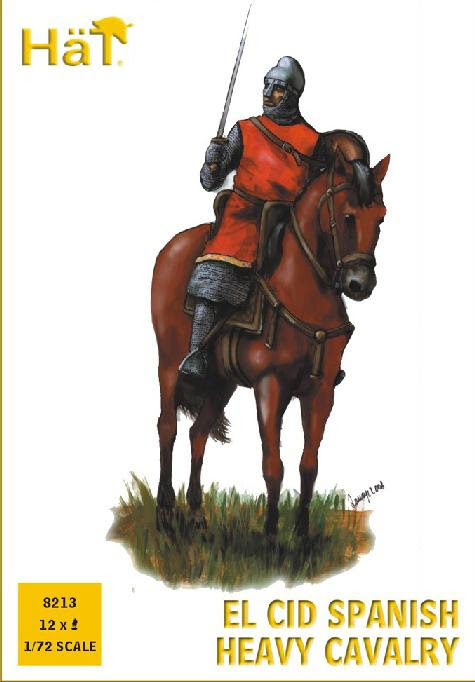 One of the things holding me back was I needed to order some more Spanish Heavy Cavalry. The Spanish used a high proportion of knights during the Reconquista, and furthermore Christian Mercenaries didn’t really seem to care who they fought for as long as they were paid, so they appear on both sides. This means that you need a lot of Spanish Heavy Cavalry (box 8213). I had painted all those Jim gave me and fleshed out the units with the mounted figures from the Spanish Command box (see pictures on this blog), but it was now time to order in some more boxes.

And here’s the problem. All the other boxes in the range are freely available.However box 8213 is about as rare as a very rare thing that has just had the last supplies destroyed in a “let’s destroy really rare things” event. There are a few boxes here and there but only single boxes with prohibitive postage. I’m not a cheapskate*, but there are limits. I’m not paying £10 all in for a box of 12 soft plastic soldiers.

I mentioned this in passing to Mark at work (he of the obscure toy soldier project blog link**). He thought he had some in his bits box as he had decided to use Strelet  Norman knights instead as he thought they looked a bit more manly than the Hat equivalents. Turns out he had a few of the command figures so I might get a couple of elements out of them. He also brought in some Strelets for a comparison and although I admire his dedication to the obscure they really are the sort of figures that only a mother could love. A look around the web indicates that ranges of 1/72nd mounted Norman style knights are very few and far between. Basically this Hat box & the Strelets.

So what am I to do? Hat say on their website that they are restocking. I’ve written and asked if this includes the Spanish boys, but no answer yet. I’m up at Derby on 3rd October, so I’ll do a trawl of the stands there and see if there are any tucked away. I’m on the Society of Ancients stand with Phil & his Battle of Yarmuk flats, so if you have any spares pop by and drop them off. You never know, I might even offer money for them.

*Actually I am
** Apparently got some extra sales after the blog post. Thanks for letting the manufacturer know. Maybe he’ll send me free stuff.