This post is about a week late. I spent all of last week in Manchester doing staff training. This was very rewarding and also enabled me to finish "The Dublin King" by John Ashdown-Hill in my hotel room (possibly more on that at a later date). However it did rather interfere with my wargaming activities and blogging.

Since I last posted anything I've finished one of the buildings I bought from Irregular at Derby. It comes in several parts and I have chosen to glue it together, rather than have a removable roof. I have also not stuck it on a base so it fits in with my SCW buildings, hopefully. I may change my mind on that later.

I used a bit of Miliput to smooth out the roof join lines, but otherwise it is "as is". The colours are based on photographs I took in Peru of buildings in the countryside. The roof tiles really are that bright. The photos have shown up some shortcomings in the paintwork, so it's going in for a respray as soon as I've finished here. 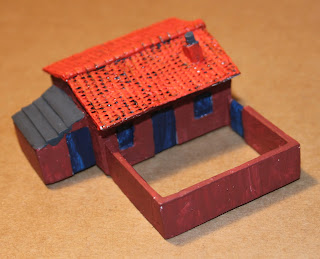 This will be the rear of the property, with it's pleasant enclosed garden area. Here the inhabitants can keep their guinea pigs and chickens. 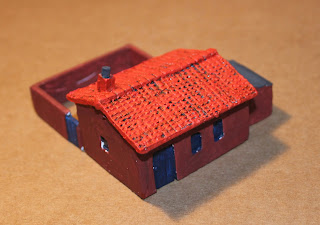 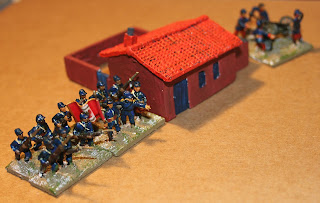 Here you can see the size a bit better. The homestead is being defended by some brave Peruvians. The building is sold as 15mm, and it is a small 15mm. As such it is about the right size for what I want. Peruvian buildings are often one storey and squat because of the earthquakesI looked at some 10mm buildings as some of the 15mm ones are really very big and take up a lot of table space. It also looks smaller because the figures are on 2mm mdf, and so look taller. If I based up the house it would reduce the difference. 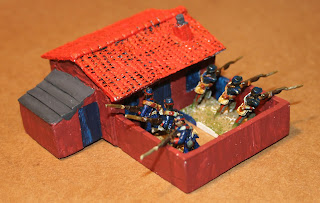 It is now occupied by the Chilean aggressors. They can fire over the wall quite comfortably, although whether they should be able to do so without a fire step is a moot point. 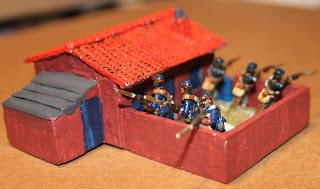 However I'm really pleased with it. £3:30 for a metal house is tough to argue with*. I wish Ian Kay all the best with this useful addition to his vast range. He's a top bloke.The houses on his website have come up better than mine as well, - although his are definitely European not South American.

* And with thess being this cheap I might splash out on a Timecast church building from their 10mm range
Posted by Trebian at 11:13