At last! A chance to try out the new armies in anger. They're not complete yet, but I've done enough to give me a game in an evening. A fortuitous combination of events forced me to work from home on Tuesday, so I was able to get home from work early enough to put on a game. 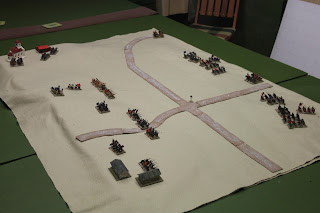 The scenario was quickly laid out and is based on a generic Pacific War battle. The Peruvians are up a hill defending. The Chileans are across the valley, attacking. Phil has already posted some pictures over on his Fog Blog, and has highlighted a number of the issues we encountered already.

Firstly I have to say that it is my intention to write an original set of rules in time for COW next July. This hasn't been possible so far due to work and other time pressures (I can't paint and write rules at the same time). However, I picked up Neil Thomas' 19th Century Europe book last year and the group has used them before for the Russo-Turkish Conflict. The book theoretically finishes in 1878 & is for Europe. The Pacific War starts in 1879 and is set in South America. However both the Peruvians and Chileans had studied the Franco-Prussian war and their approach owed more to that than the American Civil War. Furthermore weapons hadn't changed. Neil's "late breechloaders" cover the types of weapons both sides used, and his artillery rules cover the Armstrongs that were ubiquitous.

There were elements of the conflict I couldn't match completely and I had to knock up some rules for a Gatling Gun battery, but otherwise I was away without much thought required. The only choices I had to make were around troop quality and density of formation. I'm inclined to think that our South American friends formed up quite close (the Bolivians formed square to repel cavalry), but I thought that might be a bit too lethal given the firepower both sides were toting.

Having sorted things out in my mind all I had to do was wait for Chris, Phil & Will to turn up and play. 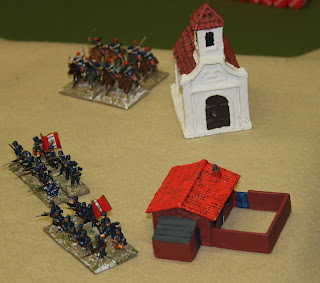 Whilst waiting I took some close ups of my figures. Here are some Peruvians defending the far ridge line. I probably need to harmonise the roof colours. The hacienda roof is more accurate, but the church roof is a bit less garish. 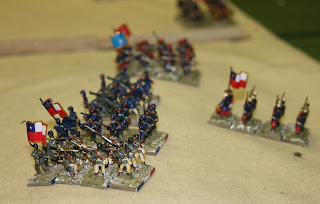 Here are the Chileans formed up for their assaults. In this game the troops with the national flags were used as National Guards and so were of slightly lower quality. By this time I had players. Will took the Chileans and Chris A the Peruvians. 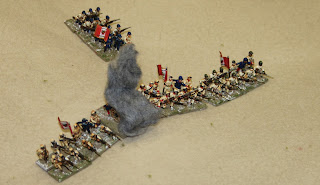 Will started out with the deafening roar of artillery, which obliterated the Gatling battery on the first turn. Well worth writing those rules for it then. 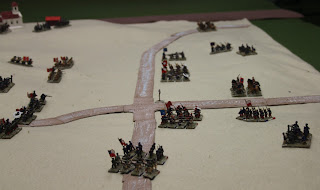 Elsewhere a general advance was in order. 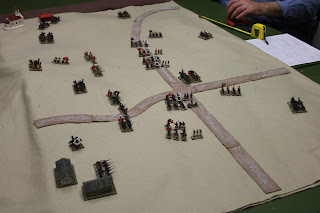 By turn 3 Phil had arrived and took over the Chilean right flank. Chris blazed away with his artillery, inflicting steady casualties on the advancing troops. No sophisticated tactics here, which is about right. 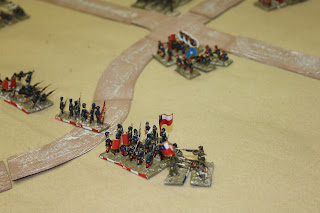 Eventually the Chileans got up the ridge and got two heavily reduced columns in on one of Chris' defending units. We were starting to get a bit uncomfortable with a few things here. The defenders are Peruvian levy class troops. However that has no effect until you actually kill something. Neil justifies this by saying that you shouldn't double count things such as morale class elsewhere, for example in the firing rules. That means that raw levy fire as well as veterans. The ability to fire a close range volley if close assaulted under all circumstances means it is very hard to get to grips with any proper force. Luckily for this game I allowed the Chileans to attack even if outnumbered because they did seem to do that in the war.

The Chileans won the melee and forced the Peuvians back, but at the cost of one of the units. Of course, as levy, they passed both the enforced morale checks and so still presented a serious obstacle even having been driven back. 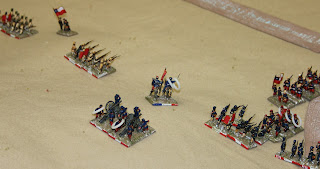 Elsewhere the Chileans were getting the worst of it. A forlorn cavalry charge up hill into the Peruvian guns ended badly in complete wipe out (I turned round the last remaining base to make it look like some routed. They didn't. They all died.) 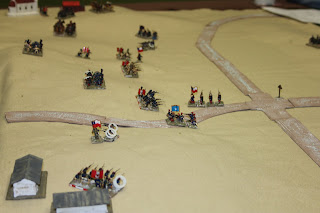 This shows the position when we ended the game. The Chileans have punched a hole in the line but have precious little to exploit it with. The far flank still has some play in it, but enough had been learned for the evening.

I think Neil's rules would work, given some heavy surgery in various places. I need to go back to my books and re-read the battle accounts to refresh my memory on how it all looked at the time (I'm reading books on medieval warfare at the moment, so it's a bit of a switch) before I start on my own system.

Epilogue: By the time I finished the blog my next order had arrived from Outpost. Lots of Bolivians, some Chileans and a packet of generals. Lots of mileage in this yet.
Posted by Trebian at 22:10