Is this a row of Amarillos?

Why, yes indeed it is!

Here are the first pair of Bolivian units for the Pacific War campaign. They're the two most senior regiments in the army. 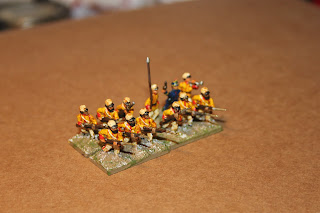 The yellow coated unit are the 2nd Grenadiers of the Guard, nicknamed  "Sucre" or "The Amarillos". 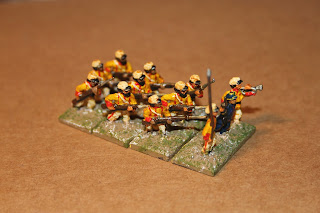 I made sure with this lot that they were based so that they go neatly into both line and column. 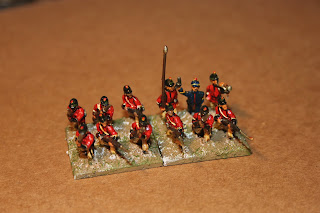 The red coats are the 1st Grenadiers of the Guard, called "Daza" or "The Colorados".

After painting a lot of Chileans and Peruvians these have been a nice change. The other two armies are mostly blue with red trousers. Colour variation comes in white, grey or black, so these bright looking chaps are a lovely burst of colour. I've got a green jacketed unit to do as well, and there were also "sister" units to this pair who wore the same coloured uniforms.

One of the Monday Nighters (Chris K) used to have a sign up in his wargames room that read "The army with the simplest uniforms win". It's a pretty good rule of thumb, and the Bolivians are at the end of the spectrum that proves the point. The various Bolivian Generalissimos/Presidents liked their men to look smart, and lavished attention on the regiments that they trusted to keep themselves in power. That's one of the reasons for the Chilean's success in the war. The Bolivian units were very uneven in equipment and training and their main purpose was to keep the President in power. Or replace him.

In fact whilst painting these my thoughts have been turning more towards a Bolivian coup game.

They're missing the standards for the moment as they're a little bit more complicated to do. They have the Bolivian coat of arms on them and overlay the red, yellow and green stripes so I have some careful cutting out to do on Serif PhotoPlus. 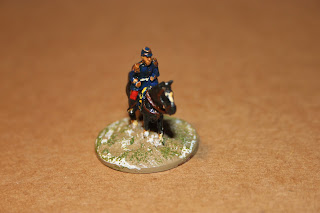 I have also finished my first pair of generals. they're a bit generic, but these are a Peruvian and Chilean. I'm using figures from Outpost's Franco-Prussian War range as they don't do specific Pacific War commanders. Napoleon II's general staff have a preponderance of gilt lacing on pretty much everything, which is ideal for South American generals. 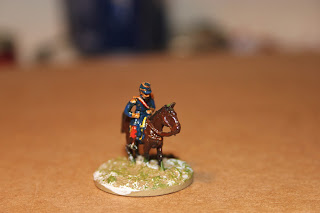 These two are wearing kepis. There's a couple in the pack with bicorns and a LOT of scrambled egg. I think they'll make good Bolivian commanders.