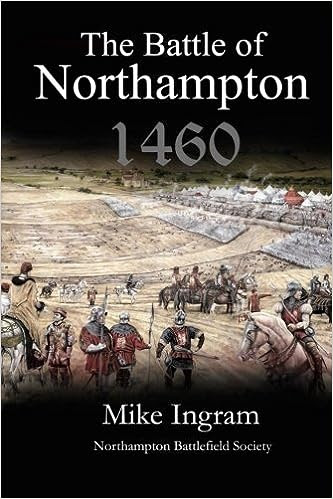 Okay. This is quite simple. If you have any interest in the Battle of Northampton and the Wars of the Roses then you need to buy this book.

Mike Ingram has gone over all the sources (and we're in double figures for this battle now, so it really is well documented, despite what others may tell you) and combined modern research to produce a thorough assessment of what we know.  Based on the current state of knowledge this is definitive.

In many way this is similar to the classic works produced by the Brigadier Peter Young on the great battles of the English Civil War. The book takes you through the background to the campaign, the weapons and tactics used by the armies of the time, the battle itself, the opposing forces and the aftermath. There's also some excellent material on the national importance of medieval Northampton, which gives the context of why they were fighting where they were.

If that weren't enough you also get reprints of the major sources for the battle (if I have a criticism it would be that I would have included all of them, but as we have a new translation of Wavrin's accounts here I'm just being picky).

In addition to the text there are maps of medieval Northampton, the campaign (with ALL the named places from the text marked on it) and of course maps of the battle and the battlefield today. The non-text items are rounded off by the requisite number of family trees and a number of photographs and illustrations, some by noted historical illustrator Matthew Ryan.

This is an ambitious undertaking by the Northampton Battlefields Society. I have to confess some self interest, - I'm a committee member of the Society and I did read the original text and make a few suggestions, - but I don't think that skews my views. People who know me, know I'm honest in these things. If the book was rubbish I'd say so and quit the Society. There are a few problems with it. A professional publisher would have employed a professional proof reader. I missed an aberrant apostrophe here or there when I went through it, but that's minor quibble, It looks great and reads well.

If you want it now and you're local to Northampton you can get a copy from the town museum. If you're father afield you can but it from Amazon. If you do wargames shows in the UK you'll be able to pick up a copy from the Northampton Battlefields Society or Society of Ancients stand most likely. All profits get ploughed back into the Society to help us defend the battlefield from unwanted development and promote a greater understanding of our heritage.