For a wargaming blog there’s been precious little about actual wargaming posted recently. However the need to work from home so I could attend a dental appointment gave me the opportunity to get a game in this week.


I have taken a break from the South Americans on my painting desk over the past week or so and gone back to my “El Cid” figures, adding in some more elements of knights to bolster my forces. I don’t have enough bases for an AMW army yet, but a game of slightly-larger-but-not-quite-Big Battle-DBA3 seemed viable.

I have been looking for some detailed accounts of battles from the Reconquista but with little luck. Then I stumbled across a blog piece about a new account published in Spanish* based upon arab sources for the Battle of Salagre/Zalaca/Zallaka/Zallaqa or whatever fought in 1086. This is the battle that Alfonso and the Cid have a big argument about in the movie, apparently, because Charlton Heston doesn’t turn up and the Christians get beaten and thousands are slaughtered and then the Muslims chop off everyone’s heads and stand on the pile. Or not.

Accounts of the battle are bedevilled by numbers. These touch numbers like 50,000 from which Alfonso only escapes with 500 men. If you’ve read Verbruggen or Contamine then you are immediately on your guard. The revisionist account I found gets the numbers down to 3,000 Christians and 5,000 Muslims, so 500 survivors isn’t quite so bad.

Looking at the likely breakdowns of the forces this looked eminently do-able with what I’ve got in the box.

Alfonso’s forces are about 2,000 heavy cavalry and 1,000 foot. This represents the teeth end of European medieval armies, and the amount of horse is further increased relative to the foot as he is marching hurriedly to intercept and destroy Yusuf’s Amoravid invaders. I made this into two DBA armies, ignoring the army lists.

Yusuf and his Andalusian allies are given as 1,000 heavy Andalusian horse, 2,000 African light horse and 2,000 foot.  Again, I put this into two armies, ignoring the numerical differences. I often have this problem when thinking what to do with DBA armies, - should I actually have given them 3 armies? Anyway, this is what I came up with:

The battlefield is unknown precisely and the accounts are a bit mixed. The Christian camp does get ransacked, but it is a long way behind the battlefield. 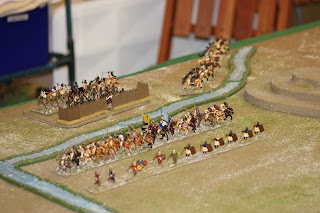 The Muslims have a palisaded camp just across a river or not, depending on who you believe. That gets attacked by the Christian cavalry. Probably.

Yusuf puts out lightly armed yihadist foot as a screen for his army, and then lines up the Andalusian cavalry behind that. The camp (or the area just in front of it) is defended by the javelin armed spear like shieldwall. The light horse he holds back and uses as a flanking force to surround the Christian army. His right flank is secured upon a deep river tributary and his left by some high ground. 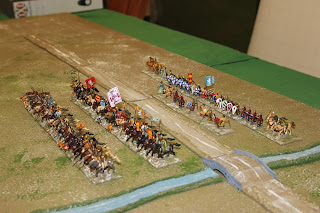 Alfonso sets his knights (“caballeros”) up in two waves, with the foot behind them. We know very little about the foot. 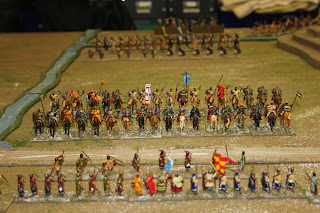 I set the armies up like that, although I was aware that this might cause problems for the Andalusians as the psiloi are likely to get swept away and so demoralise Army 1 quite quickly. Phil, when he saw the set up, suggested using Hordes instead as they don’t count towards the army breakpoint.

Anyway, Phil took the Spanish & I took the Andalusians and the Almoravids. He started with a headlong rush at my line. He also brought up light horse from his reserve to provide a flanking element. His second line of knights he split to send his right hand elements off to guard himself from my flanking manoeuvre. 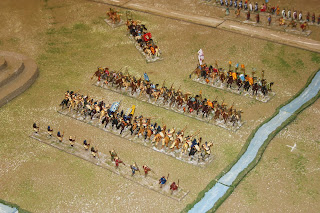 I responded by moving my cavalry through my psiloi. I really needed more PiPs so I could send my psiloi out to widen my position and protect my cavalry’s flanks. 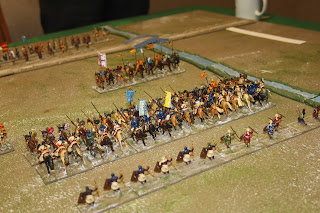 Phil then clattered into my line to pin it, I think, whilst he brought up units to give him an overlap on the left. Also because he'd got knights v cavalry. 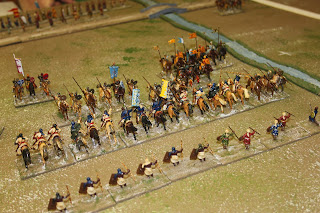 As it turned out I did quite well in the initial combat as I only lost one die roll and managed to kill a Knight element and otherwise disrupt Phil’s front line. 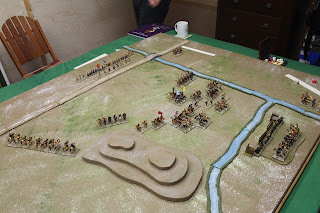 Meanwhile I started to send my Light Horse round the back of the hill to attack Phil’s flank & rear.

This was the high point of the game for me. 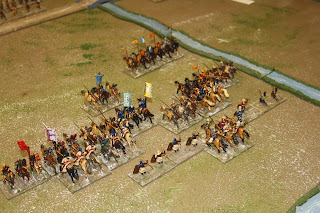 The next round I don't think I rolled more than 3, so I got pushed back or killed all along the line. 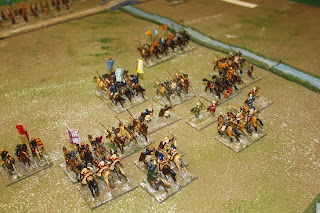 It didn't get any better in my turn. I ended up recoiling behind my psiloi. The knights followed up not giving me any breathing space. 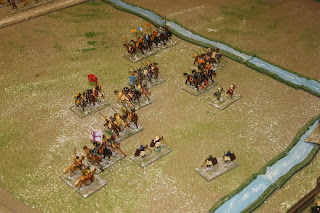 By now the army had lost 4 elements and was demoralised and started to flee the field. My general died gloriously. 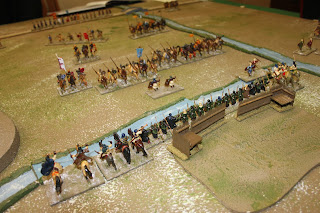 I pulled my second army out and formed a defensive line on the river bank.

What I don't have any more of its pictures of what happened next. We played the PIP rule for light cavalry wrong, doubling the cost because they were behind a hill. This rule doesn't apply to light horse, so I took longer getting round than I should have and Phil had more than adequate flank guards in place.

In all honesty I suspect that this wouldn't have made any difference as I quickly lost another four elements and the whole force was consequently demoralised and beaten. Victory for Alfonso.

I think the scenario has legs in it if I resolve a couple of things. The LH should probably just appear on the flank, and the Christians shouldn't be able to wheel units off to protect the flanks until this attack has been triggered. Phil's suggestion about the Hordes is a good one too.

Any how an enjoyable evening even tho' I lost. Really pleased with how these armies are shaping up. Need to alternate painting these with the work on the South Americans before I revisit the game however.