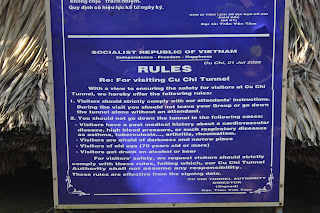 One of our day trips whilst in Ho Chi Minh City was to the Cu Chi tunnel area. This was given added poignancy as our guide's family was from the area and had pro-South sympathies. He himself was born after the war, but his mother and brothers all lived in the tunnels.

The Cu Chi area was strongly Communist, so US forces forces bombed repeatedly (one bomb from a B52 to every square metre) and also sprayed defoliants. The response of the population was to go underground.

No trip to Saigon is therefore complete without a trip to the remains of the tunnels. 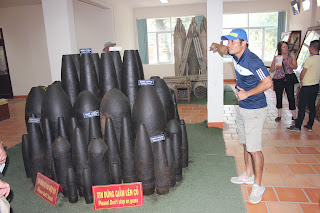 The trip is mainly about the VC's resourcefulness in the tunnel area, but they don't miss a chance to show you the sort of weaponry the US was putting in the field against them.

The site is run by the Vietnamese Army as a theme park. It is manned by photogenic young guides who smile a lot and look very fetching in the black or green pyjamas. Alas I seem not to have taken any pictures of them for this photo report.

You are introduced to the subject by a black and white propaganda video, probably shot in the 1970s or 60s. It celebrates the military victories of the villagers, featuring a number who won "Heroic American Killer" awards after seeing their families being slaughtered by US forces. Subtle it ain't. It is very obviously staged and as so many Vietnamese saw combat I wonder who it is supposedly aimed at. 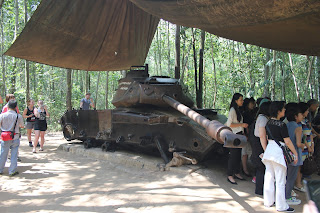 Leaving the video tent you are greeted by a knocked out American tank. All the while you can hear firing in the background. This isn't sound effects, - you can fire AK47s or any number of weapons left behind by US forces for $1 a round. It's clearly very popular and must be a big earner for the site. Apparently the locals hate it as it brings back too many memories of the war.

Some of the area is given over to tunnels that actually remain. 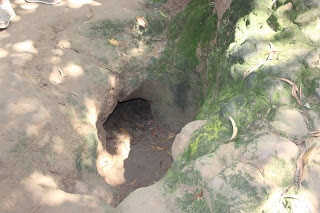 This is an access tunnel that had been partly dug out. Not big, is it? 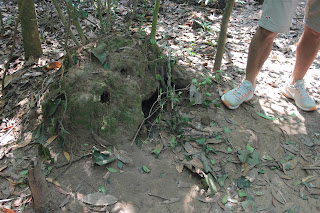 This is a ventilation shaft. It should be covered in foliage. The US used dogs to sniff them out, but the locals sprayed them with American soap so they'd get confused. 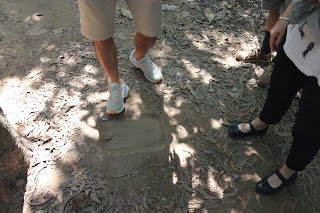 Here you can see the entrance to a tunnel, covered by a wooden board. The feet in the picture belong to the guide. He's big for a Vietnamese, but small for a Westerner.

These really are very, very, small. 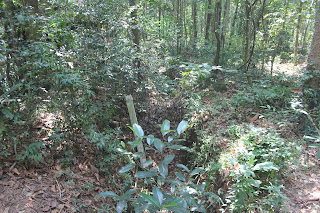 As far as I can make out they didn't fight from the tunnels, but had foxholes next to then entrances. You can just make this one out.

This is the last of the authentic photos. All the rest of the site is reconstructions.

They're quite proud of the booby traps they set for the US forces, which were developed from animal traps. 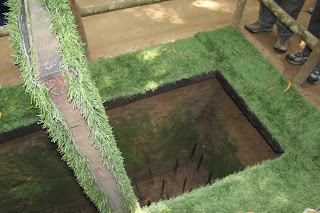 Even with all the other weaponry on display they really are rather unpleasant to say the least. 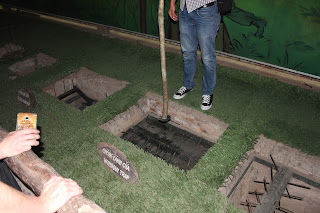 There are several sets of these dotted about, manned by demonstrators with long sticks they put in them to activate them. 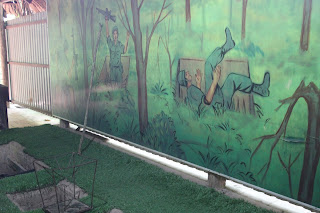 They're accompanied by a fresco showing the hapless Americans falling into them. 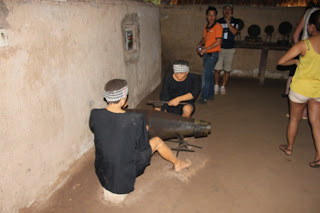 There's a tunnel you can go through that has been widened for Westerners. I went to go through, but bottled it. I get claustrophobia, particularly when the atmosphere gets hot and humid, so not perfect for me.  The other "tunnels" you can look into are reconstructions dug into pits, which to be fair are fairly dark. Here we see two mannequins sawing an unexploded shell in half to extract the explosives to make weapons. 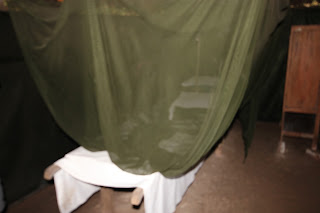 This is a hospital room. Very difficult picture to take as it was pitch black and the camera couldn't work out how to focus. Our guide's mother was forced to work in one of these. 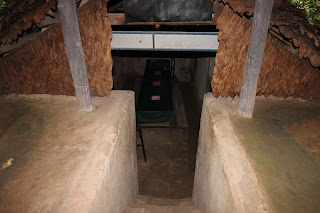 This was a dining room, I think. One hole in the ground can look pretty much like any other. 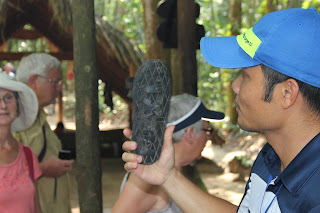 There were also practical demos of things like how to make Ho Chi Minh sandals out of truck tyres. 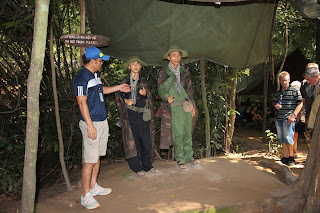 Finally a couple of wax work heroes of the fight against the Western Imperialists. This is the uniform effected by the regular guides.


Typically some of the pictures I took didn't work out right, or were just under or over exposed. In and out of the trees made for some awkward lighting conditions. I also thought I'd taken pictures then found I hadn't.

For example I didn't get a good one of a B-52 bomb crater.

Which is a shame, as that's where they put all the earth so the Americans wouldn't know they were tunnelling.