Been a bit tied up for the last few days, so the second report of the pre-Christmas games day is a bit delayed.

After some dinner at a pub in the village the evening's entertainment was provided by Chris A at the request of Phil. Phil was quite keen to try Saga, as he thinks it might work as a basis for a Samurai game. In my case it gave me a chance to pull out some Essex Saxons & Normans who last saw the light of day in my award winning participation game, "Harrying of the North".

Saga is a 28mm semi-skirmish Dark Ages game with a lot of followers. Nothing I say here will make any difference to what anyone thinks of it. 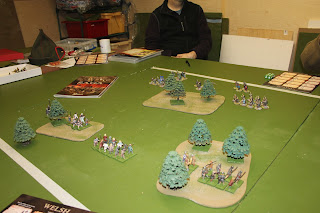 Chris umpired and used my figures as Welsh and his as Vikings, as he understands both of these armies. In the game you get small bands of warriors led by a warlord, and there's lots of special abilities that you may or may not be able to use. You get this special set of dice and you roll them. Then you allocate them to the abilities on your Battle Board (TM) such as Ambush, Move, Go Berserk and so on. These vary by army type. This is quite an interesting mechanism and is a novel way of dealing with this type of chrome. Mastering this bit of the game is essential to playing it well. I'm not sure of I have enough interest to learn the system. 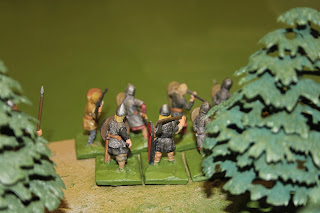 Anyway, I partnered Richard against Phil, and started off sneaking through the woods, using an ability that meant I didn't have to slow down. 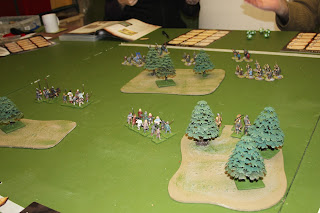 Then Phil shot me with his bowmen and killed lots of figures. I think I was unlucky. 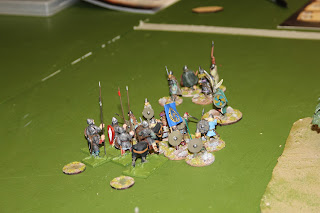 Richard then charged over on the other side of the board. The markers represent fatigue. Your opponent decides what effect this has on you. Which is quite clever. 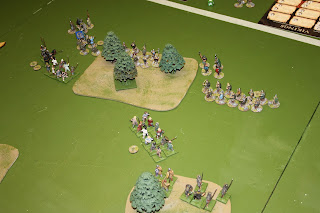 We moved up our archers and shot, missing everything. Clearly better to shoot at targets in cover. 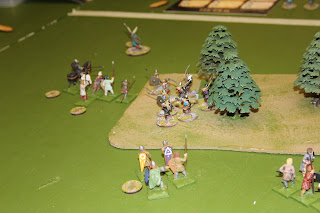 We won the fight on our left, driving off their warlord (he's at the back in a big winged helmet) but we were clearly going to get caught in the flank by Phil's chaps hiding in the wood. I rushed my hearthmen across to provide support. 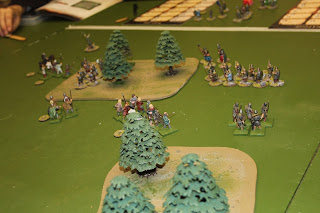 I also rushed out of the wood as being shot at whilst standing still was a bit rubbish. 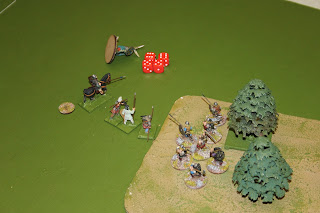 Alas for Phil his warlord was forced to charge us or lose face, so Richard killed him and the game was over.

There's some interesting ideas in the game and it doesn't hang around long enough to outstay its welcome. I can see why people like it, but I'm not sure I can be bothered to learn it. Having said that it's more playable than older medieval / dark ages type skirmish games (eg Retinue), so it has something going for it.

There are a number of mechanisms I may pinch in future, but I find the basic Battle Board mechanism a bit contrived for the period. I can see rolling dice and allocating them to functions working for me in a more modern game where leadership is also about management, but not really here, I fear.

The rule book is nice & glossy, but it has the need for summaries and little boxes where an irritating bloke called Ragnar explains how you play the game. I'd like to think that should be clear from the rules text. But what do I know.
Posted by Trebian at 18:04