"It's getting a bit Chile" - first draft musings

Following the previous post on the subject and the helpful comments from Natholeon, Chris G and Martin Rapier I had a bit of a rethink.

After much humming and hawing I decided that the 6" squares were giving me too much of a problem for how to deal with stacked units and so on. The simple solution was to drop to 3" squares, each representing about 250 yards.

Rather than re-dot my sand coloured cloth I repainted my vinyl mat to match my base style and then marked it up with white sticky dots. These will be replaced by small green paint dots probably once I've fully firmed up this is what I want. Or perhaps not. 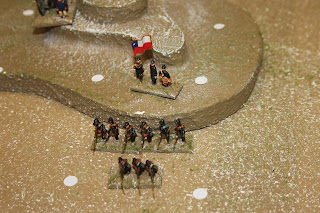 I also went over the formations again, as I'm sure that getting these right is the key to the game. So above we have a firing line with skirmish screen and supports. 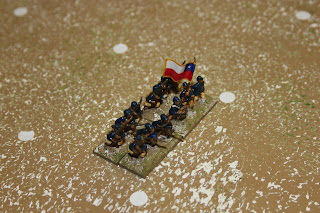 This is a double strength line. No skirmishers, no supports. This is an everything-up-front maximise firepower formation. 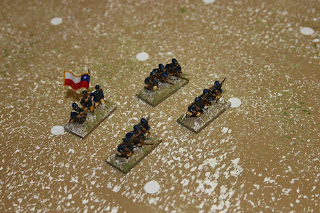 This is a unit in "guerilla inglesa" or Open Order. It has two bases in a firing line and two as supports. 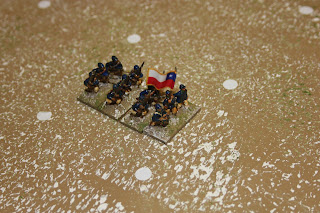 March Column. No skirmishers, no supports. 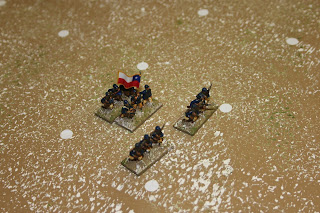 Attack column. Two skirmish bases and a column. No supports. 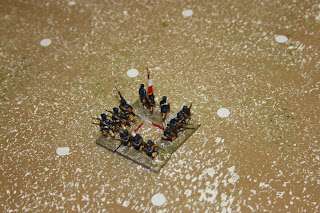 I've struggled getting my ideas sorted out so that I'm not just pinching someone else's ideas and passing them off as a new set of rules, as no one ever does that, do they?

The firing mechanism works like this, I think. When a unit is fully formed and subject to no Disorder it rolls one D8 per firing base. So, in a firing line, it rolls three dice, because supports don't fire. An open order unit rolls two dice, as does an attack column, and a double line rolls four.

The score to hit is based on the target formation, say 8 for an open order line. Other formations have a lower number. I've put the base scores in a row with high scores to the left and low to the right. Target modifiers shift the target difficulty to the left (eg if in cover or at longer ranges) or to the right if easier (eg if enfiladed or being shot at by elite troops).

The firing units rolls its dice and inflicts a Disorder marker for each multiple of the target score it gets with the total. A unit with supports can absorb that number of Disorder markers with no ill effects on its shooting. Any unabsorbed Disorder markers drop the dice rolled in shooting by a level from D8 to D6 to D4. If you then get hit again you can't fire. To many Disorder markers and the target retires or eventually breaks.

The melee rules are based on those for "Send Not To Know".

There are a lot of things still to add, - like command rules and the full effects of terrain, but those are the core combat mechanisms.

The next post will cover the first play test, which took place last night.
Posted by Trebian at 10:08