"It's getting a bit Chile" - first trial game

Thursday evening saw the first play test of the Pacific War rules. I was ably assisted by Chris A and Phil. For this early war battle I had the combined Peruvian & Bolivian forces attacking the Chileans holding a crest line. I played the Chileans as the defence is fairly passive in this type of scenario. 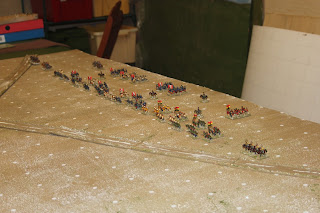 Here's the massed forces of the Alliance. Bolivians to the right as we look at them. 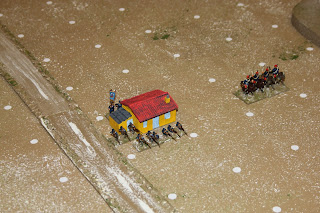 Here's one of my new haciendas from Irregular Miniatures, guarded by some Chilean infantry. 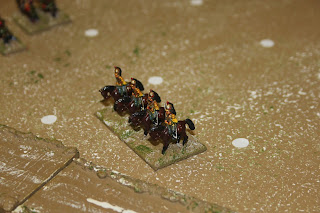 And out for their first airing the 1st Cuirassiers of the Bolivian Army. 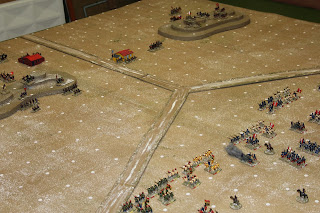 An opening salvo from the Peruvian guns inflicts a Disorder marker on the unit opposite. You should be able to make out the smoke from the gun and the white disorder marker. 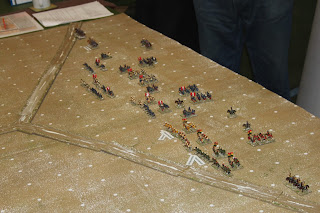 The Chilean artillery returned fire and caused a lot of damage. First indication I may have got this bit of the rules slightly wrong. 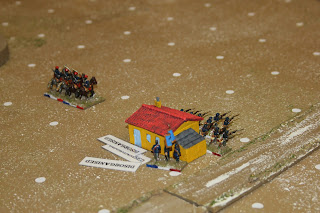 This was evidenced also by the Peruvians pounding one of the haciendas, which seemed to provide little shelter. 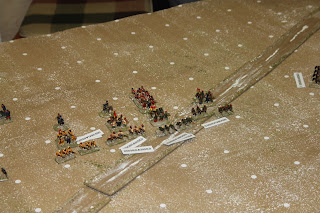 Yup. Artillery probably too powerful. Notes were made on my print out of the rules. That's why the photo record is incomplete. I spent a lot of time making notes. 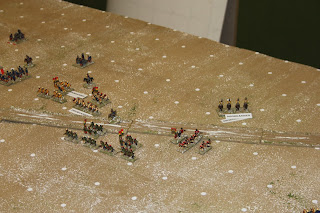 See, there's a gap where the Cuirassiers are duffed up by some scruffy Chilean dragoons, and Phil had to deploy the Colorados (the guys in red) to protect his flank. 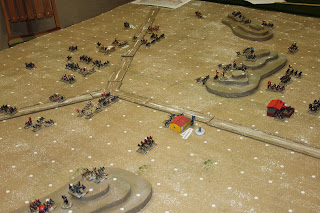 Elsewhere Chris had one brigade that had adopted modern Open Order tactics and was so making better progress. 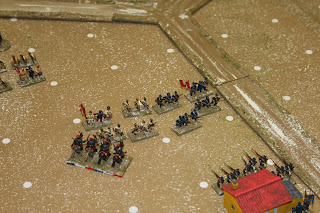 However, being in Open Order makes for a tempting target for a cavalry charge. The cavalry got thoroughly trashed. Mostly because the units are half the size of the infantry. Time for a rethink there as well. 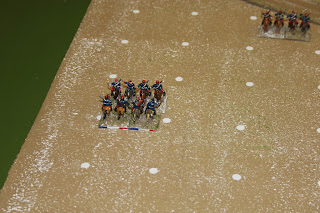 Out on the left we had a cavalry clash too. I won this one, which created a problem later. 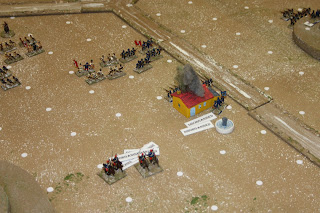 With the cavalry driven off the firing into the hacienda caused a small conflagration. 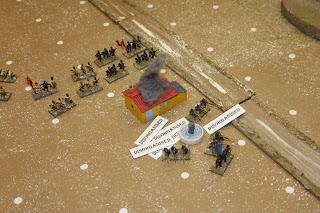 With the cavalry in retreat the Peruvians closed the distance and drove the defenders out with heavy, close range fire. 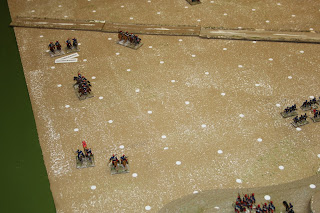 I followed up after winning the cavalry melee on the left and then was caught by a fresh unit and broken. This rather exposed my left flank. Shouldn't have been greedy. 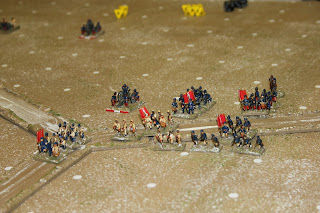 In the middle the Peruvians continued their advance, and started to bring up their artillery. I had withdrawn my guns at this point as they were causing too much damage and I wasn't going to be able to play test some of the other rules. 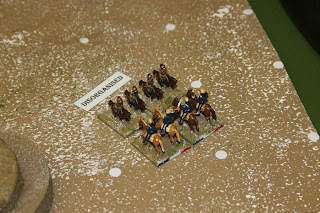 We had another cavalry tussle on the right... 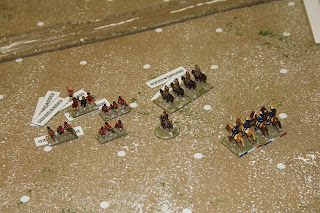 ...which I won, having shot off the Colorados from the ridge line. 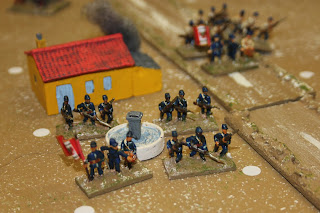 The Peruvians drove on in the middle and captured the well. 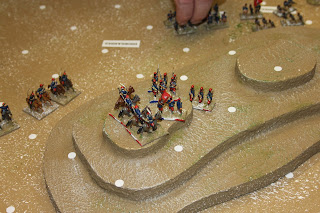 On the left I got completely flanked and was charged in the rear by the Peruvian cavalry. Not sure about this. I think I might restrict cavalry to flat ground only. 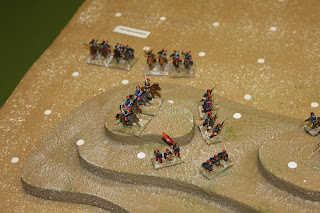 Of course this is sour grapes as my unit was broken immediately. 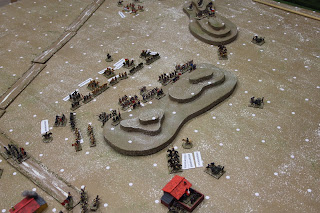 In the centre the Peruvians were held off from the hills I was occupying by sustained rifle fire. This bit looked fine 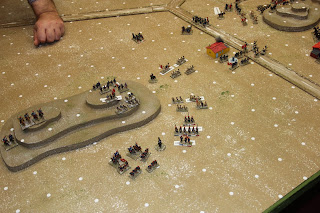 Alas my left had collapsed completely, so we called it a night.

The core mechanisms being tested held up well enough. I need to run through the numbers to make sure I've got the values spot on but the D8>D6>D4 mechanism discussed previously worked well, and the disorder process tied well with the formations. The players followed this really quickly, which is good, as I've sometimes had problems here.

As I said before there are lots of rules still to add in, but the central engine looks good. Very pleased with progress so far.

As a footnote I should say something else about the formations. In conversations with the late Paddy Griffith he, and others, were of the view that if we are playing army commanders we shouldn't trouble ourselves with giving orders for formations at battalion level as that's the job of battalion commanders. Generally I think that's right, but in this case there's sufficient evidence of formations being decreed from on high and people possibly getting it wrong that I think this is an important part of the rules.
Posted by Trebian at 10:15