This Wednesday saw the 2016 inaugural Shedquarters game for 2016. My contract hours have been reduced to three days a week, and this week I'm in the office Monday, Tuesday and Friday, so I had a midweek weekend. Plenty of time to plan and set up a game. My initial intention was to do some more work on my 19th Century Pacific War project, but I struggled to make it work (bit of rule writers block). Plus I had four players to keep occupied at the first meet up of the year, so I needed something that was high on action and low on the need to remember rules.

So I settled on a game of AMW, using my Assyrians and my Persians standing in for Medes. As there were five of us I put double armies on the table - 16 units a side - and also added some scenario interest, requiring the Assyrians to capture and burn a town.

Much as I am a fan of Neil Thomas' work AMW is not without its problems. The armies aren't balanced (deliberately, - as he points out some armies are actually better than others) and I harbour a suspicion that not all of them have been playtested thoroughly. The Assyrians v Medes is not a very fair match up. The Assyrians are mostly Elite and have better armour. They can also move and shoot with their heavy units. I therefore upgunned the Medes in certain areas, improving armour and letting them move and shoot too.

Chris K took leadership of the Assyrians, and Will commanded the Medes. I helped Chris until Phil arrived, and Chris A helped Will. Clear? 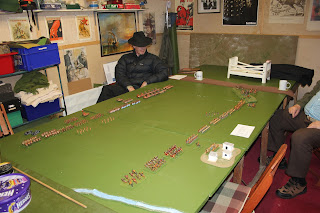 Chris K, in the hat, re-arranged the Assyrians, making a strong left wing with all the chariots. His plan was a double envelopment whilst refusing the centre. This was unfortunate as the Assyrian foot in the centre is really good. Perhaps I should have told him. The Assyrian right is also a bit light on cavalry. Will responded by strengthening his right to counter the chariot threat. 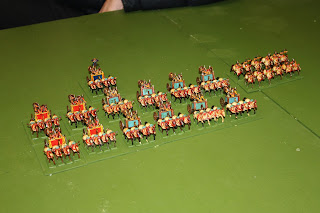 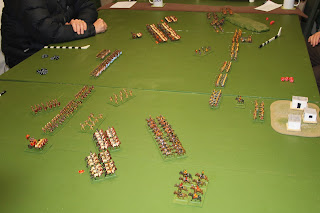 Couple of moves in and you can see the aggressive advances on both wings by the Assyrians. We are falling upon the fold, wolf like. 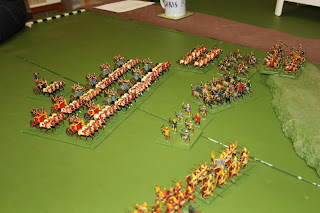 Will is hurriedly trying to line his forces up to resist the Assyrian on-rush. It looks a bit futile at this point. 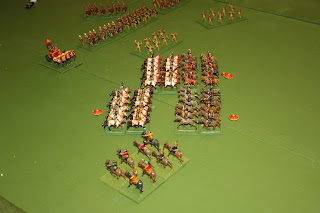 On the other wing the presence of the Median light horse was proving an irritant, and would continue to be so for the whole game. 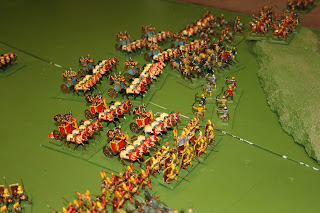 My, it looks like a car crash out there. Don't give much for the chances of the light infantry in the middle. 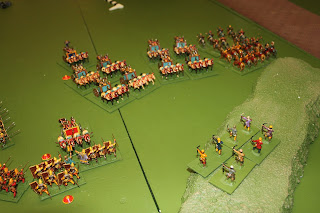 Within a turn or two Chris has punched a big hole in the Median right flank, aided by the precipitate retreat of the light infantry. Alas he has lost his cavalry flank guard quickly, much to everyone's surprise. 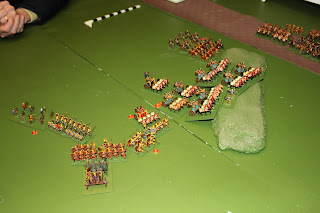 Storming through the gap there is no way out for the light infantry. The outer chariot unit has defeated all comers and is looking to swing into the centre and roll up the Median infantry. 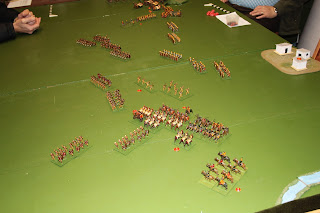 Meanwhile on the other flank it has got a bit attritional, and the Assyrian envelopment has sort of stalled. Phil, who is running this flank, has ignored the order to refuse the centre and is closing as fast as he can. Wise man. 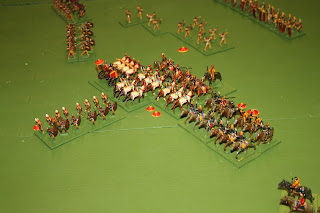 The Assyrians are now a cavalry unit down on the right flank, but Phil is rushing some Auxiliary infantry across to shore it all up. 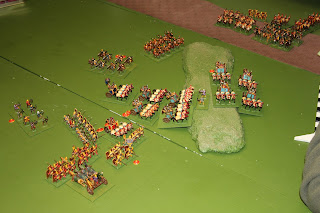 The chariot units are so big that exploiting the breakthrough is more problematic than all expected. 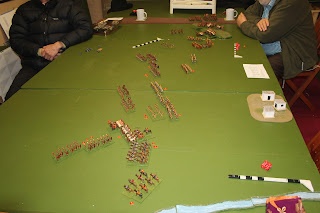 A general view of the battlefield shows the centres are closing very slowly. 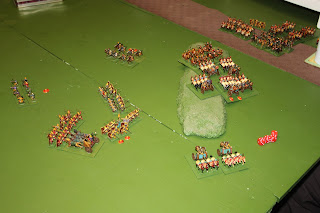 Some unfortunate dice rolling cut one of the chariot units in half, but they're still through. The other unit was too slow turning, and the Median heavy cavalry succeeded in about facing and catching it in the rear. 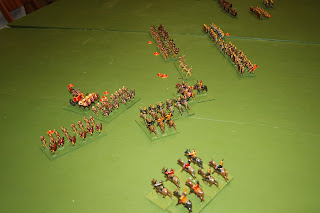 The Assyrian cavalry on the other flank is now history. 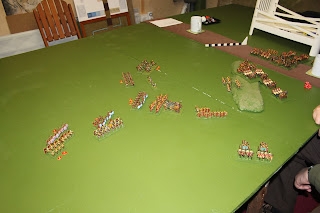 The infantry finally meets up, and the struggle begins. Can the chariots get round quick enough to make a difference? Meanwhile the other chariots are pinned in combat, and some Median infantry is closing on them. 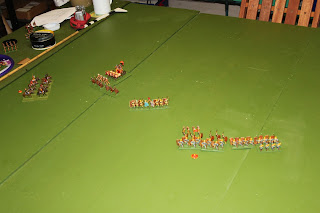 The Assyrian right has pretty much collapsed in a spectacular round of rolling 1s & 2s. 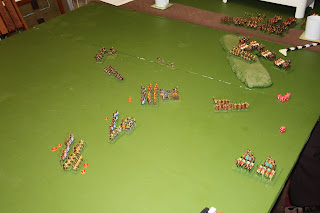 The chariots have nearly seen off the Median cavalry but they're starting to suffer from the infantry attack.

And that's about where it ended. The Assyrian army was in no fit state to carry on and the Medes had held on.

On reflection I over compensated for the Assyrian strengths and removed their cutting edge advantage too much. The cavalry melees are more protracted than suits a plan as aggressive as the Assyrians adopted as they can't get to resolution quickly unless one side is consistently lucky. However the game was tense for most of its length, and occupied four players for nearly three hours.

Not a bad start to the year.