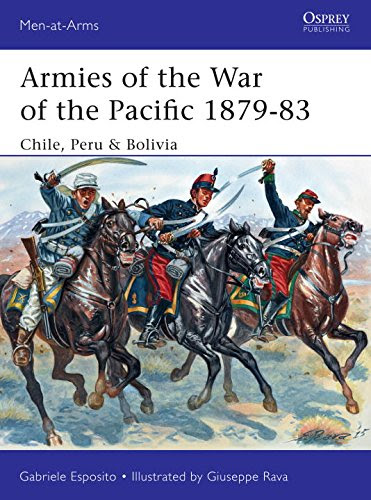 I've finally got my copy of, and read, the Osprey on the War of the Pacific.

Any new Osprey on a subject you are interested in is always greeted by a mixture of excitement and trepidation. Some Ospreys are really good and some aren't. Having said that when I start a new period I always try to hunt down the relevant Ospreys first to try to get a quick start into the subject.

As there were no Ospreys on the 18979-1883 war when I started I had to go out and find other books as a starting point. I've blogged about them elsewhere and the wargamer is surprisingly well served, given the obscure nature of the war. Alan Curtis' excellent two volume publication from Nafziger is a must buy (get it direct, - it's cheaper) as it is written by a wargamer for wargamers, and the Partizan Press uniforms book is excellent.

The Osprey is a good little book. It's cheaper than the stuff I've already mentioned, for a start. The outline history of the war and the campaigns/battles is well done and very clear, - something not always the case with other accounts I have read. Of course as you've got less than 50 pages it is a very sparse outline. However despite claims to the contrary in the chapter headings there's little in this book to help you understand the tactics of the war and how it was fought.

Of course you mainly go to an Osprey for the illustrations. They're really good and the colour ones are supplemented by a fair few line drawings in b&w but with full descriptions of the relevant uniform colours. However it doesn't really add anything to the Partizan Press book. In fact the line drawings are clearly taken from the same source as the Partizan Press book, often down to the same poses.If you have the latter you don't need the former.

The area that is completely lacking is anything to do with unit flags and standards, which is a major disappointment. However the maps are good.

So, in summary, not a bad primer on the subject, but not a lot there for anyone who has moved on from base camp. It isn't a bad book, - there are no errors in it that I could see on my first read through, which is always reassuring, but it hasn't moved my thinking any further forward. I'd say it makes an acceptable substitute for the Partizan Press book if you don't want to shell out the extra £35 to get your hands on it.