This week saw a visit to Shedquarters by an old and valued acquaintance. Richard Brooks, the military historian, came to see us and give a talk to the Northampton Battlefield Society. As he was coming all the way up from the south coast it would be silly for him to come all this way and not squeeze in a game.

As Richard is fairly knowledgeable on the France-Prussian war and late 19th century warfare in general (well, actually most periods, to be honest, but he has produced a good set of 1870 period rules) I thought it would be helpful to shove him head first into the maelstrom which is the 1879 Pacific War. 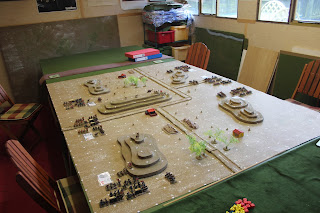 Due to work commitments I didn't have much chance to put any thought into the scenario so I went with a simple encounter battle using all the toys I have. The Chileans are to the right, the Alliance to the left. To break the game up a bit the Peruvians have a forward outpost of local troops on the prominence in the middle of the table. 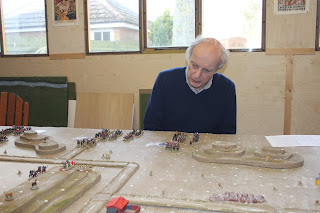 After some lunch and discussion Richard took over the Chileans. It turns out he spent the early few years of his life in Lima, so was aware of the degree of tension between the nations in that part of the world over the outcome of the war. My other player was to be Phil, but I took over the Allies until he arrived. 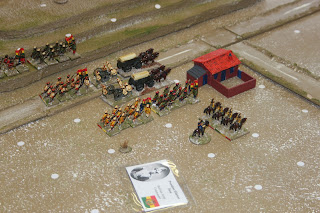 Stage Centre I had President Daza of Bolivia and his elite Division, lead by the Colorados. He pressed forwards, eager to get at the invading Chileanos. 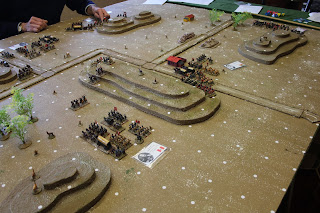 On my left there was a Peruvian Division under Colonel Cacares. 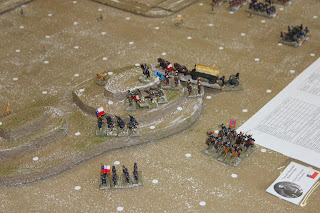 On  his left Richard sent troops forwards to seize the heights and get his guns in a dominant position. 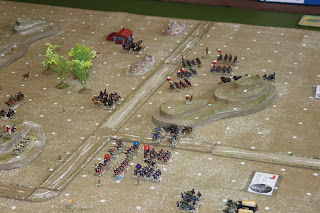 On his right he moved forwards slightly more cautiously, adopting Open Order as soon as possible. This was based upon his knowledge of what happened to troops in dense formations facing breech loaders in the Franco-Prussian War. 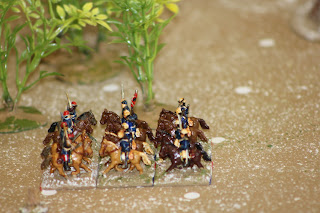 On the right we soon had a cavalry melee as the brave, but outnumbered, Peruvian caballeros gave it their best shot. They were driven off with minimal difficulty. 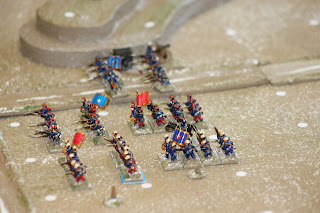 In the centre the main Chilean Division, consisting of pre-war regulars, advanced to take the hill. 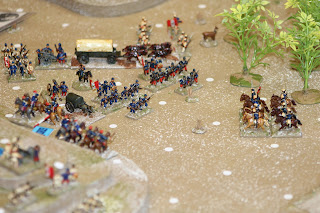 Phil had taken over by now, and had got Cacares up to support the central units. His aggressive handling of his foot enabled his cavalry to retire and reform without being chased down by the Chileans. 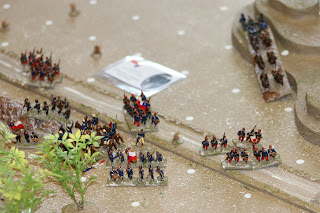 Undaunted Richard pushed forwards on his right. You'll note that for this game I broke up the line of sight a bit through deploying some wooded areas. 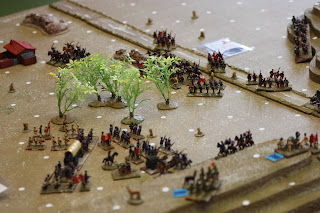 Desultory fire broke out on this wing and it looked to me that it might take a while to resolve. 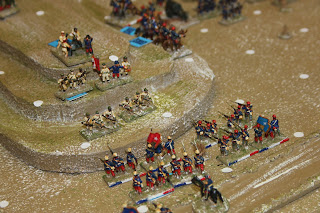 In the centre the Chileans had got to the base of the hill and were engaged in a firefight with the occupiers of the summit. This is where the Chilean attack started to get bogged down quite badly. 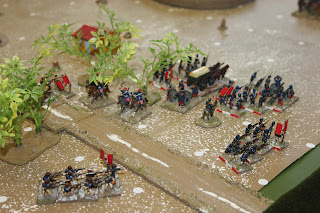 Over on the Allied right a lone Peruvian Division edged its way forward. 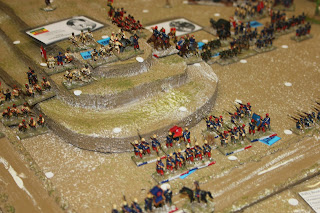 The intensity of the firefight in the centre increased but the Chileans were unable to fight forwards from the bottom of the hill. 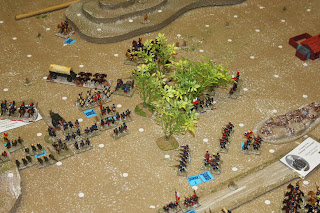 Over on the Allied left the fight round the wood was causing a fair amount of confusion. 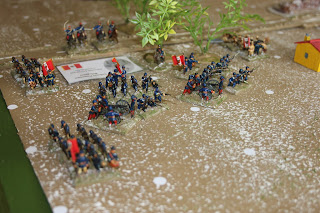 On the right the flanking Division finally emerged and deployed for action. 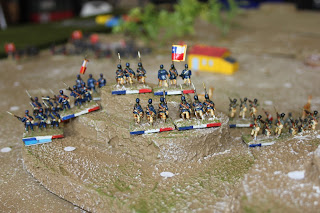 In response Richards troops on the hill top deployed into Open Order and started a disruptive fire. 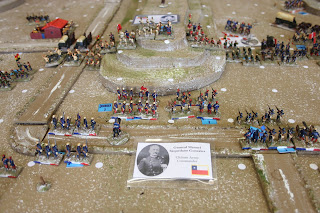 In the centre the Chileans brought up mote troops but were still unable to launch an assault.

As often happens when old friends meet after a long gap games take longer to play and discourse can become more important. I'd say in 3 1/2 hours we probably got in about 2 hours worth of play so we didn't reach a conclusion.

However the time was not wasted. The revised close combat rules did get used and I am pleased with the outcome for both cavalry and infantry combat. Richard made some suggestions about move speeds and infantry moving/firing. Apart from that the system still seems to be holding up.

In order to get these fully tested however I'm going to have to limit my ambition a bit. I keep putting on multiple division games that don't always get to the point. I need to run a series of smaller solo games to try out specific scenarios and see what happens if people actually do what I think they should do.

Still, progress is being made.

And Richard's evening talk on Simon de Montford was very interesting too.