I’ve been blogging now for over six years and have climbed to the dizzy heights of 201 followers (down from a peak at the end of last year of 214 – what did I say to offend you out there?) which gets me out of the range of the Leibster Awards for small plucky blogs nobody reads.

One of my followers is Henry Hyde (Hi Henry!) of Miniwargs & Battlegames who is a recent joiner, relatively speaking. When I saw him pop up I didn’t really pay it much attention. Henry edits a wargames magazine. It’s safe to assume he follows large numbers of blogs, trawling for the latest hip new trend if such things exist for wargamers. 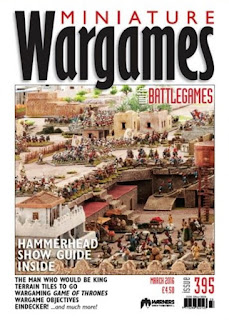 However this month, in edition 395 of MW&BG, apparently this blog has been nominated as one of Henry’s two blogs of the month. So I had to say a warm thankyou to Henry for noticing and publicising my efforts. I realise that he’s probably been doing this for a year or two and at 2 blogs per month this probably means I don’t make his top 50, but even so….

I don’t actually buy any wargaming magazines regularly every month*, although if I did I’d favour MW&BG over Wargill. I wrote a blog a few years ago explaining my reasons in more detail,  although sometimes I’m tempted. My reasoning is, to quote Kate Nash, “I’ll just read a book instead”. Most of what I want about the periods I’m interested in won’t be in a generalist magazine so I’m going to end up buying monographs anyway. Plus I don’t need to be inspired to do a period by the presence of a nice looking range. Usually my thinking is the other way round except for a couple of one off projects, documented here**.

I will admit, however, that this can mean I miss out on what is currently happening and there’s always a danger I’ll re-invent the wheel. On that front Chris A & Phil are sort of my guides as they attend a lot of shows in the year and will let me know if there is already a solution out there to a problem I’m trying to fix.

On this occasion though I thought I’d pop out and pick up a copy to show some support. Plus it’s about time I did a bit of market research. As I had to go out and renew my season ticket on Sunday my first port of call was the WHSmith’s in my local railway station. Alas no MW there, but then it is a small branch. Consequently I popped into the larger independent newsagent in a local shopping arcade. Many, many magazines, one copy of Wargill, as many railway magazines as you could possibly want, but no MW.  Ho hum. Still, going into the smoke on Monday, so sure to get a copy there.

My first stopping point was the WHSmith’s in Euston (both of them), which didn’t even have a copy of Wargill let alone an MW. Round the corner from my office is Fenchurch Street station but no luck there either. Another WHS, of course, but they did have a single copy of “Skirmish” magazine for the discerning re-enactor.

Honestly this is getting a bit irritating. How am I going to bask in the admiration of an adoring public if no one can actually buy the magazine?

*I obviously get The Nugget when it is published as I’m a WD member but I don’t think you’d class it as a magazine. And it doesn’t come out monthly.

** On reflection that might not be true. I got the Sumerians because I liked the war carts, the Assyrains because of the four horse chariots, the RCW stuff because of the Armoured Train, the WotR armies because they just looked nice, the XIVth Army because of the hats... yes, I might be a serial offender in this area.