"It's getting a bit Chile" playtest 2.

The weekend gave me the chance to make sufficient rule amendments following the first playtest to warrant having another go.

I made changes to the effectiveness of artillery by halving the number of dice per base and doubling the number of bases in a battery. I also did minor surgery to the hand to hand combat rules, the rally/disorder rules and also the way troops in buildings are dealt with. There were numerous other minor changes and clarifications as well. Alas I still haven't got the command and control rules sorted.

For this game I had a new player - Chris K - as long as with Chris A and Phil who were at playtest number 1.

Strangely enough I don't seem to have taken a whole table set up photo. Briefly there's a railway running across the middle of the table, a small stream in one corner on the Peruvian left flank, a town on the Chilean right, some trackside buildings in the middle and a few hills mostly in the corners. For this game we're in the littoral area, not the altiplano. The scenario was that the Chileans had landed and were pushing inland with two divisions to seize the railway. The Peruvians were rushing up a similar sized force to stop them and liberate the town. 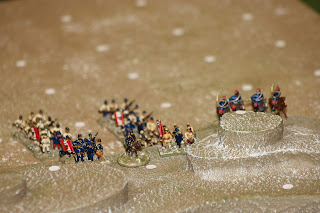 On their left flank one of the Peruvian divisions had to cross a small range of hills. 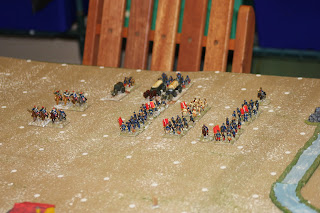 The other Peruvian division was more centrally placed. It has one artillery battery and a Gatling gun unit. For this game limbers were supplied by my British Sudanese baggage train. 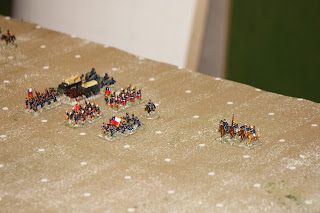 This is the left hand Chilean division.... 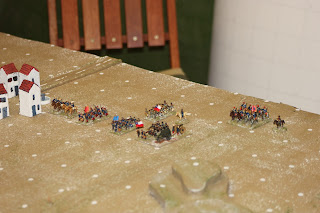 ...and this is the right hand division. 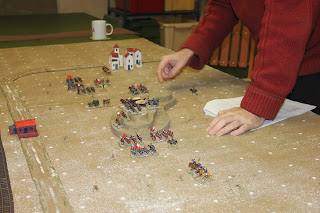 The first move saw a rapid advance by the Chileans commanded by Chris A, making the most of the move bonus for being in march column. 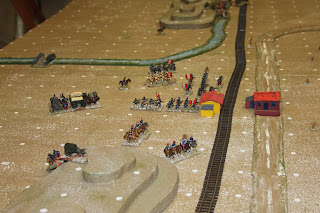 Chris K, however, had the drop on him and got his troops to the railway buildings first. This proved crucial. In the bottom left corner you can see his Gatling guns heading for the hill top to provide covering fire. 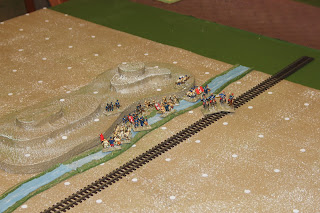 On the left the other Peruvian division was taking its time crossing the stream. 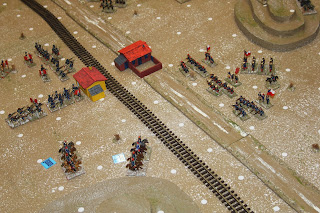 The first firing of the game badly mauled the Peruvian cavalry in the centre, giving me a chance to show off my new blue Disorder markers, taken from my SvP set. You can see that Chris K has sheltered his infantry behind the buildings so he can stay in the faster, more vulnerable march column. 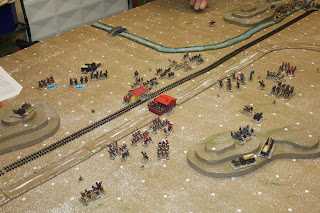 Next turn the Peruvians have seized the station, and pulled back their cavalry, deploying their artillery to cover the troops in the buildings. The Chileans have got their guns on the heights, ready to give the Peruvians sheltering in the centre a hot time. 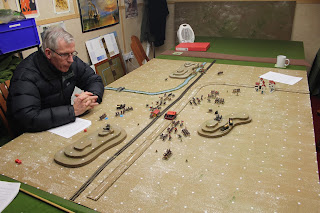 Chris K is very thoughtful at this point. He's trying to work out how he can stop his troops in the buildings being surrounded and overwhelmed. It looks like he may have trapped himself. Shows what I know. 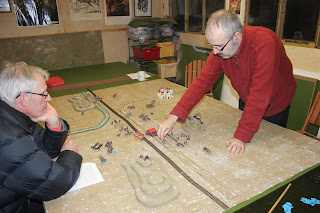 Chris A with the Chileans presses forward. His right centre is badly threatened however as the Peruvians have got into a firing line along the railway. 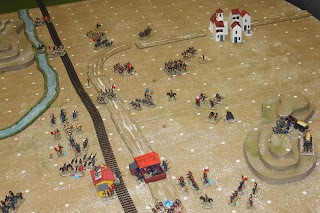 The Chileans' other problem is that I have over compensated for the strength of buildings and the effectiveness of artillery. Some rifle fire Disorders their large cavalry unit, centre top of the picture, so Chris pulls it back out of the way, and launches a charge with his other smaller unit. This is evenly matched with the Peruvians and so, barring an extreme dice rolling event,  will provide a holding action that will slow down the Peruvians until the other cavalry can reform. 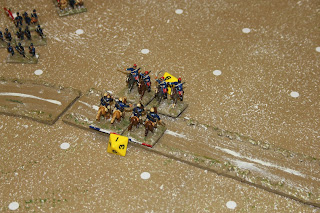 So the 8:1 outcome wasn't what he was looking for. The Peruvian cavalry routs their opponents and emerges unscathed. 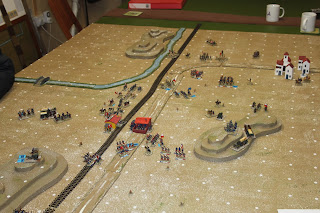 There's a messy fire fight going on in the centre now, and the Chileans are unable to break into the station.... 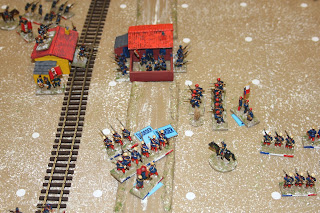 ...whose defenders are dishing out some serious damage. 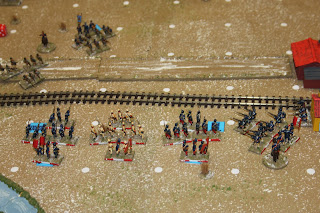 In the centre the Peruvian infantry are having a good evening of it too, clearing away some of the opposing infantry. 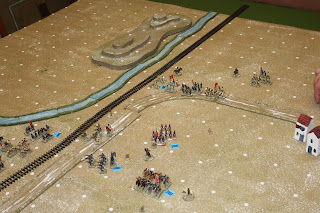 Phil had arrived by this point and had taken over the Peruvian left wing. This was starting to encircle the Chilean centre line. Chris A by now was unable to buy a decent die roll, and was collapsing all over the place. 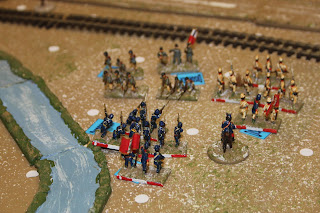 As a last ditch effort he launched an open order charge on the end of the Peruvian line who in sheer surprise were thrown back a square.

The Chileans were in a bad way by this stage and we were about ready for everyone to pack up and go home.

Another successful game from a designer's point of view. The core mechanisms have shown no need for major surgery. Some of the factors aren't quite right and as I said I have over done the adjustments on the artillery rules. All things considered, however, a satisfactory outcome. Compared with my normal development curve I'm well advanced for CoW in July.

Just need to get some llamas.
Posted by Trebian at 16:32